Exploring the historical sites of Trondheim

First things first: Gratulerer med dagen Mor! That is: Happy Birthday Mum! Wish we could be there to celebrate it with you…

We spent our morning walking the streets of Trondheim; this is without a doubt our favourite thing to do in any town, it’s such a great way to get a feel for a place. Walking through a new city gives us time to soak in the atmosphere, enjoy the scenery and people watch, all at our own pace. So that’s what we did for the morning: wandered along the Nidelva River, through the cobbled streets of Trondheim’s Old Town. 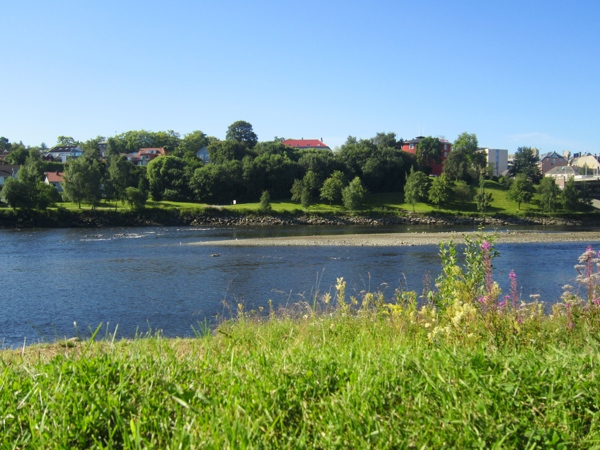 Walking along the banks of the Nidelva River in Trondheim.

The cobbled streets and wooden buildings of Trondheim’s Old Town.

Much of the riverfront area in Trondheim is parkland, which we had all to ourselves this morning.

Most of the buildings here are wooden, left from the 17th, 18th and 19th centuries. Painted in bright colours, these wooden structures make the streets of Trondheim picturesque and charming. Particularly attractive are the rows of large wooden warehouses lining the river. Built in the 1800’s, when Trondheim was a trading hub and a major port of call for ships travelling up and down the Scandinavian coast, most of these warehouses have been beautifully restored and converted into restaurants, cafes, shops and business premises.

Some of the wooden warehouses lining the Nidelva River are 250 years old.

The iconic waterfront warehouses of Trondheim.

These warehouses were historically used to store trading goods, but most are now restaurants or shops.

The riverfront area of Trondheim made for a lovely morning walk, and a great spot to grab a coffee. It’s hard to get used to the cost of everything here, but at least the $7AUD coffees were good! Apparently Norway is one of the most expensive countries in the world when it comes to the price of food, accommodation, etc; Oslo commonly comes up as THE most expensive city in the world on the “Big Mac Index”. Though this is really more of an issue for visitors like ourselves as median Norwegian incomes are also amongst the highest in the world. In fact, due to the high income level of most Norwegians, if you work here, Norway is actually one of the cheapest countries in the developed world (i.e. the number of hours one has to work to buy goods is low). As a consequence Norway has a very high standard of living. They also have a typical Scandinavian socialist welfare system that helps ensure those not on high incomes can still get by. The main source of income in Norway is North Sea oil – they have heaps of petroleum apparently. Who knew?! Since Norway has one of the smallest population in the world with one of the biggest oil industries it’s not hard to see why living expenses are high and the standard of living is so good. Still, a $7AUD cappuccino stills hurts the wallet! 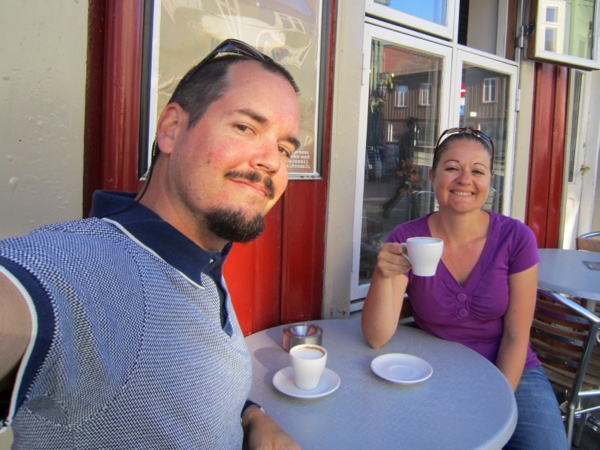 The view from our coffee perch wasn’t too bad either.

Refreshed and re-energised we then continued on to Nidaros Cathedral, Trondheim’s enormous Gothic church. Nidaros Cathedral was fist built in 1030 over St Olaf’s burial site (though on a much smaller scale than what stands there today), and became the seat of power of the Roman Catholic Church in Scandinavia soon after. Following the Reformation of the 16th century, however, all traces of St Olaf were removed and the church was converted into a Lutheran cathedral. Regardless of its denomination, the cathedral has played an important role in Norwegian history for almost a thousand years, as this was where Norway’s kings and queens came to be consecrated. Even when the capital of Norway moved to Oslo, Nidaros Cathedral still maintained its role in this regard.

*A note on St Olaf: St Olaf, formerly King Olaf of Norway, was canonised upon his death in 1030 for his role in bringing Christianity to Norway. He is seen as a key figure in Norwegian history and pilgrims used to come in their thousands to Trondheim to visit his grave. St Olaf’s Way, as the pilgrimage route was known, is still traversed today and runs for over 640km from Oslo to Nidaros Cathedral.

Unfortunately we couldn’t take photos within the cathedral itself, but suffice to say it was amazing inside. The satined glass windows were especially beautiful and the sheer size of the the place quite awe-inspiring.

The ornate frontage of Nidaros Cathedral.

The cathedral was added to and remodelled repeatedly over the centuries with the current incarnation completed in the 19th century. 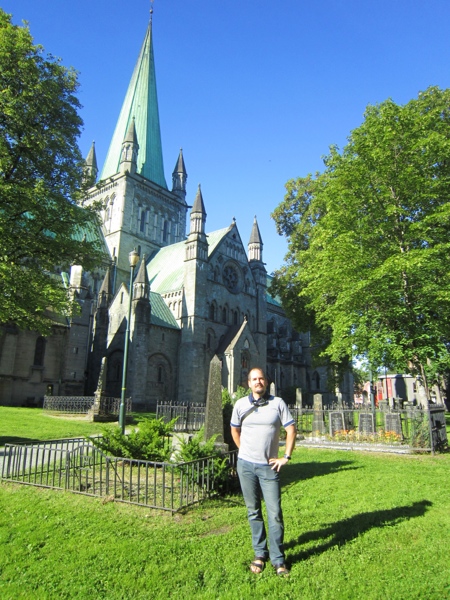 The cathedral’s grounds contain a very old and well maintained graveyard that was quite interesting – seeing what rich and famous people were buried there.

Alongside the cathedral there are a number of museums that we also visited. These contain various displays relating to the cathedral, its construction, its history and the life of the Archbishop and priests there; one of the museums also contained all the crowns and coronation paraphernalia of the Norwegian royalty; and a third was dedicated to all things war-related – from early 16th century weaponry through to WWII artefacts. So I guess you could say we spent our afternoon exploring Norwegian history.

As we left the cathedral and museums we had to navigate our way through a whole lot of trucks and workmen; the square around Nidaros Cathedral was busy with people setting up market stalls, stages and seating for the St Olaf Festival, which begins on Sunday. The festival is held every year around St Olaf’s Day and includes musical concerts, public talks and all sorts of entertainment in the name of King Olaf. Unfortunately we won’t be here to join in because we’re off sailing down the Norwegian coast tomorrow! 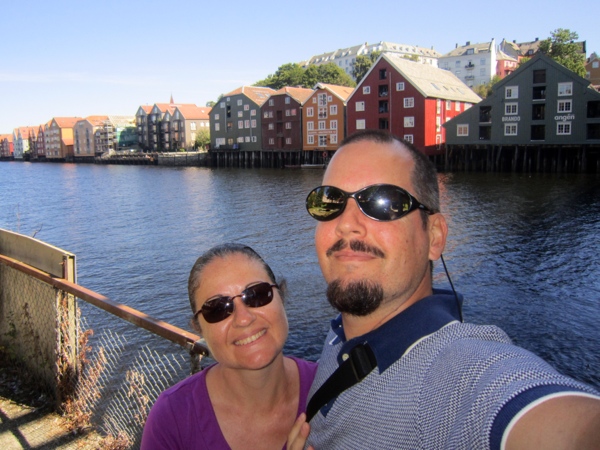 So long Trondheim – tomorrow we’re off cruising the Norwegian fjords!