Exploring Copenhagen from the waterline

We were ecstatic to wake up this morning at the genteel hour of 8:00am (no 5:00am street rave parties or anything!), and even more pleased to see ugly naked guy’s curtains still drawn. Already our day was looking good, and the sunny blue skies outside just added to the sentiment. Just to make sure we had a really awesome start to the day though, we went back to our favourite Danish pastry bakery (Andersen’s by Tivoli Gardens – we can highly recommend the chocolate scrolls next time you visit Copenhagen), and topped up our caffeine and sugar levels. Having spent yesterday exploring this historical city on foot we decided to take a different approach today and tackle Copenhagen from the water. There are lots of canals in the old town and cruising around is the easiest way to get to some of the more interesting corners of Copenhagen, so we wandered back to Nyhavn where all the ferries and tour boats leave from to find ourselves a ride for the day. A $20AUD ticket each got us an all-day hop-on/hop-off ferry ticket and we were off exploring sights like this…

Exploring Copenhagen from the water gave us the perfect vantage point.

It must seem like all we’ve been doing in Scandinavia is cruising from one spectacular waterway to another… which is actually not that far from the truth. But that’s one of the things this part of the world is famous for and all the guide books say cruising is one of the best ways to explore Copenhagen. Who are we to argue with the tourist guide books?! So cruise Copenhagen’s canals we did, starting in Nyhavn and going past the very modern Copenhagen Opera House and National Art Gallery buildings.

Cruising the canals of Copenhagen in our hop-on/hop-off topless boat. Watch out for low bridges!

Cruising out of Nyhavn, past the old townhouses.

The National Gallery of Denmark, which locals refer to as “the Black Diamond” for its funky shape and colour.

From there we cruised further down the main Inderhavnen (translation = between islands) canal towards the modern part of Copenhagen. The buildings here were all ultra-modern glass and brick, with lots of open spaces and public waterfront areas. The boat took us all the way south to Fisketorvet, a 21st century shopping mall built on the old Copenhagen fish market site.

Cruising through the modern part of Copenhagen. 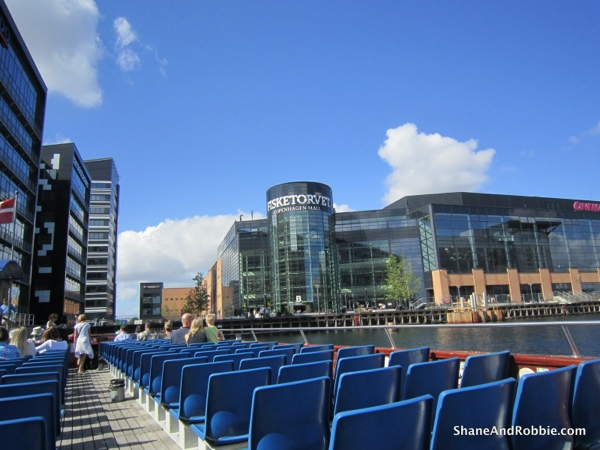 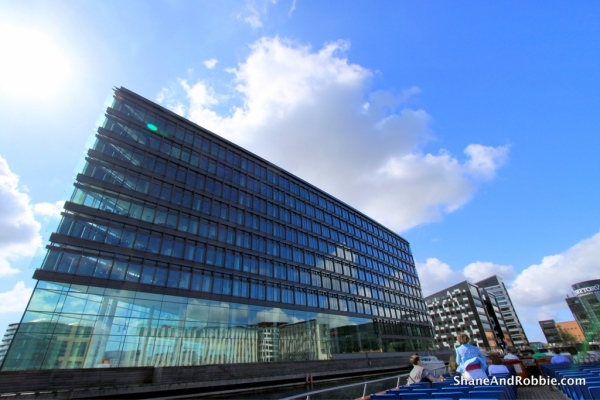 The ultra-modern buildings of Copenhagen.

Shopping malls the world over are pretty much the same so we gave that stop a miss and continued on our journey to the island of Christianshavn. We hopped off in Christianshavn to explore this picturesque 16th century neighbourhood, with its multitude of waterways, canal-front cafes and old houses. This part of Copenhagen is one of the oldest areas and is often referred to as “Little Amsterdam” due its canals and architecture

The beautiful houses of Christianhavn. 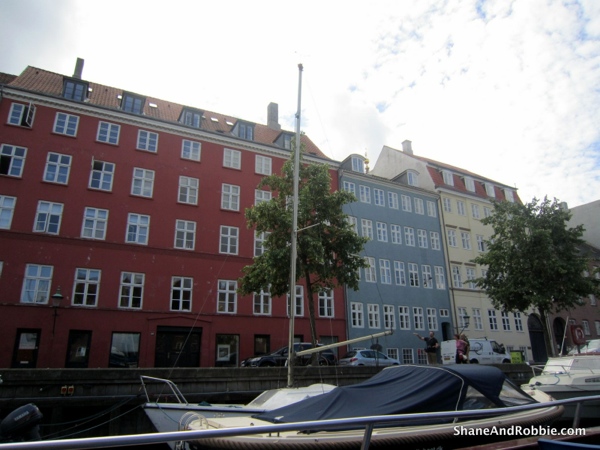 The cityscape of Christianhavn.

From Christianshavn the boat went across to the tiny island of Christiansholm (King Christian IV did like to name things after himself didn’t he?). Christiansholm is the heart of old Copenhagen; it’s where the main royal palace is and houses a number of museums and historical sites. We hopped off there too to admire the castle and stroll through the streets. It was interesting watching how the boat had to navigate and turn to get through the narrow canals around Christiansholm – the boat barely fit around the corners and basically had to do 3-point turns to get around. The bridges in this old part of Copenhagen were particularly low, with a few of the taller people on the boat having to duck to fit underneath, and that’s sitting down!

Squeezing under the low bridges around Christiansholm.

Part of the Christiansborg Palace compound on Christiansholm. 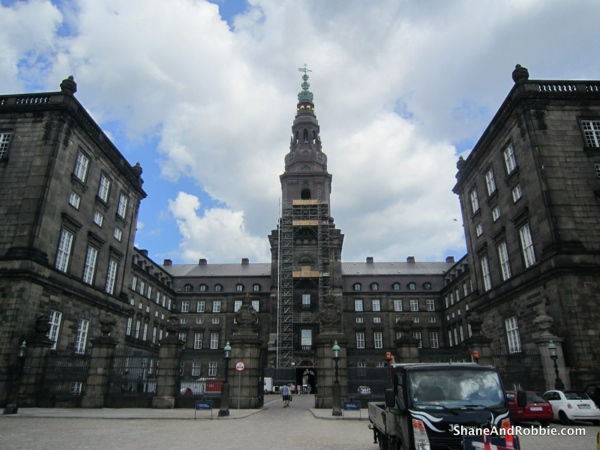 The National Museum of Denmark, Christiansholm.

Sailing out of the tight canals around Christianholm.

By this stage it was time for a lunch-time stop so we found a cute cafe by the water that specialised in pickled herrings of all varieties (they’re a bit of an obsession around here) and smorrebrod (translation = traditional Danish open sandwhich). Not so sure about the “Pickled Herring Platter” for lunch, but a couple of good smorrebrod never go astray. The appeal of these open sandwiches is that they are loaded up with lots of salad and chicken/roast beef/fish, without too much bread. And the one slice of bread they do give you is not that silly white fluffy stuff we get in Aus (which has the same nutritional value as a paper napkin); this is solid dark rye bread full of sunflower seeds, pumpkin seeds and linseeds. Bread with actual NUTRIENTS in it – wow, what a novel concept! Everywhere we’ve been in Scandinavia, actually, the bread has been amazing. We normally don’t touch that yeasty, fibre-free, tasteless crap at home, but here it’s been a pleasure actually enjoying the bread part of our sandwiches!

Smorrebrod for lunch in Copenhagen.

We then proceeded on past the Amalienborg stop, Gefion Fountain stop and Little Mermaid stop as we saw all of those lovely spots yesterday. The Copenhagen Beach Club was new though. This “beach club” is a big old shipping yard and warehouse on the more industrial side of Copenhagen’s Inderhavnen that has been converted into a restaurant and bar. There were deck chairs and sun lounges spread out all over the concrete former shipping yard, with lots of locals sunbathing and sipping cocktails under beach umbrellas. Not an ounce of beach sand anywhere mind you, but that’s about as close as you get to a “beach club” in central Copenhagen it seems! 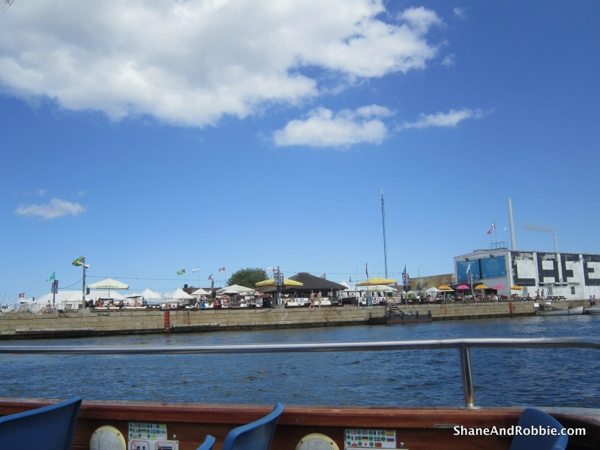 The final stop on our boat cruise around Copenhagen was the Trekronor Fortress. This 17th century fort was built on a slither of land, right at the entrance of the Inderhavnen, facing out to sea. Designed as a look-out and first defensive point, the fortress is today a tourist attraction and popular picnic spot for the locals. Being good little tourists we took our photos and were suitably impressed.

Trekronor Fortress. Not a bad spot to pull up in your boat for a picnic hey?

Finally we jumped back on to a boat and headed back to Nyhavn from where we strolled back home for our final evening in Copenhagen. We’ve literally only been here the weekend and already we’re packing, preparing to fly out to Iceland tomorrow. It would be great to have a few more days in Copenhagen, and to have at least a week or 2  to explore a bit more of Denmark, but Iceland calls and we must go! So far Scandinavia in general has been quite intense – we’ve been here just over a month and have seen 4 countries in that time. Condensing everything into such a short time was partially about timing (i.e. Finland, Sweden, Norway and Denmark had to fit between stuff we had booked in Russia and Iceland), but also about funds: this part of the world is beautiful, but REALLY expensive. We would have loved to have spent twice as long in every country as we did, but Shane is rather attached to BOTH his kidneys and didn’t feel that selling one was worth it, just so we could spend a few more weeks in this Northern-most part of Europe. Still, we are extremely grateful to have had the opportunity to see what we have, to experience what we did, and to have crossed paths with the people we met. The scenery in mainland Scandinavia is superb, people are lovely, and things are just generally functional, modern, clean, safe and easy. To anyone contemplating a trip to this corner of the globe I say DO IT!