We’re in Iceland people – actual ICELAND! Land of volcanoes, lava fields, black sand, glaciers and geysers. We’ve been REALLY excited about this leg of the journey; the desire to see the unique, unspoilt wilderness of this volcanic island was irresistible. This is the farthest North either of us has ever been (Reykjavik sits at 64°08’N – just 2° below the Arctic Circle; it’s actually the most Northerly capital city in the world) and it is so unlike anywhere we have ever been that already we’ve been left a little awed. Just look at the views we had from the plane as we landed: 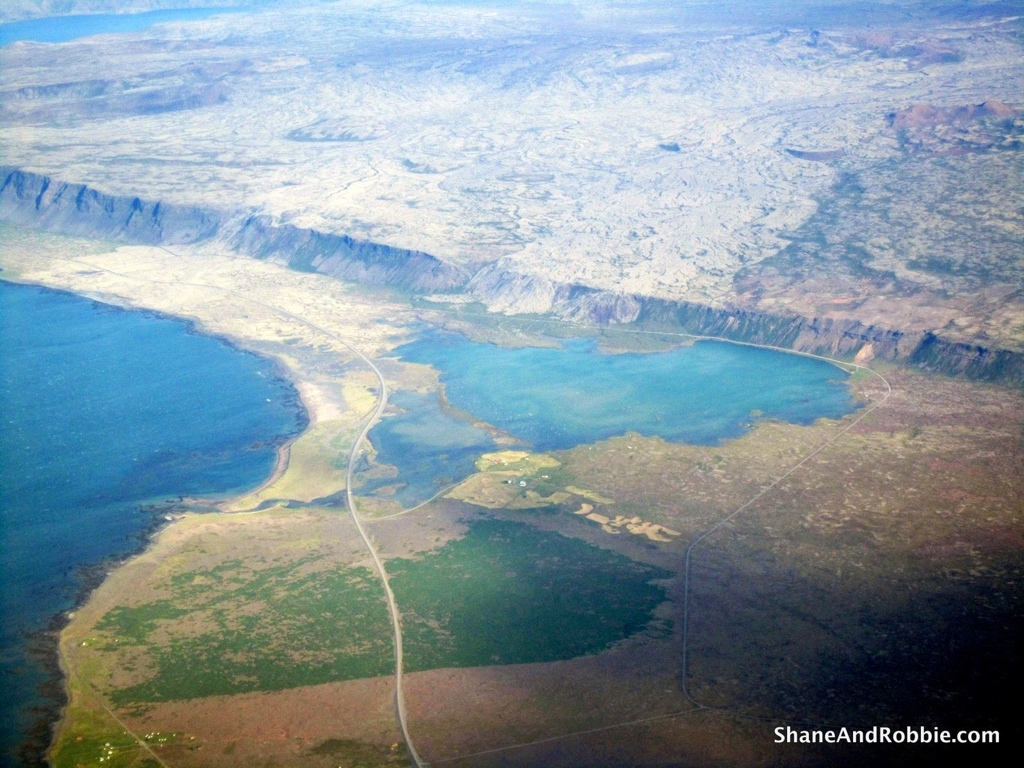 The views from the plane as we landed were quite extraordinary. Blue glacier-melt lakes set against a lunar landscape with no trees and just a bit of green grass to off-set the greys and browns. Very cool. 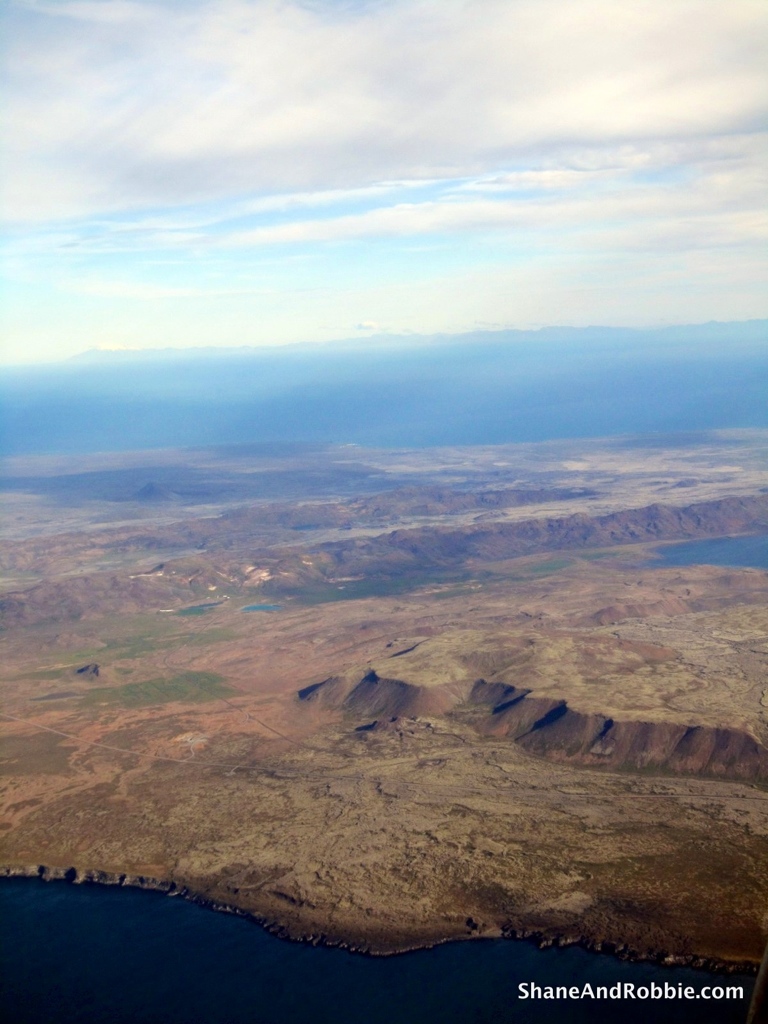 Iceland from the air.

Iceland is most certainly unique. It’s one of the most geologically active sites in the world, with a landscape that looks almost alien due to its desolation and topography. There are virtually no trees and out on the open plains, where winds blast across the island from the North and the East, there are only rocks, carpets of pale lichen and a few sturdy grasses. We passed through landscapes like this on the drive from Keflavík International Airport to Reyjavik. 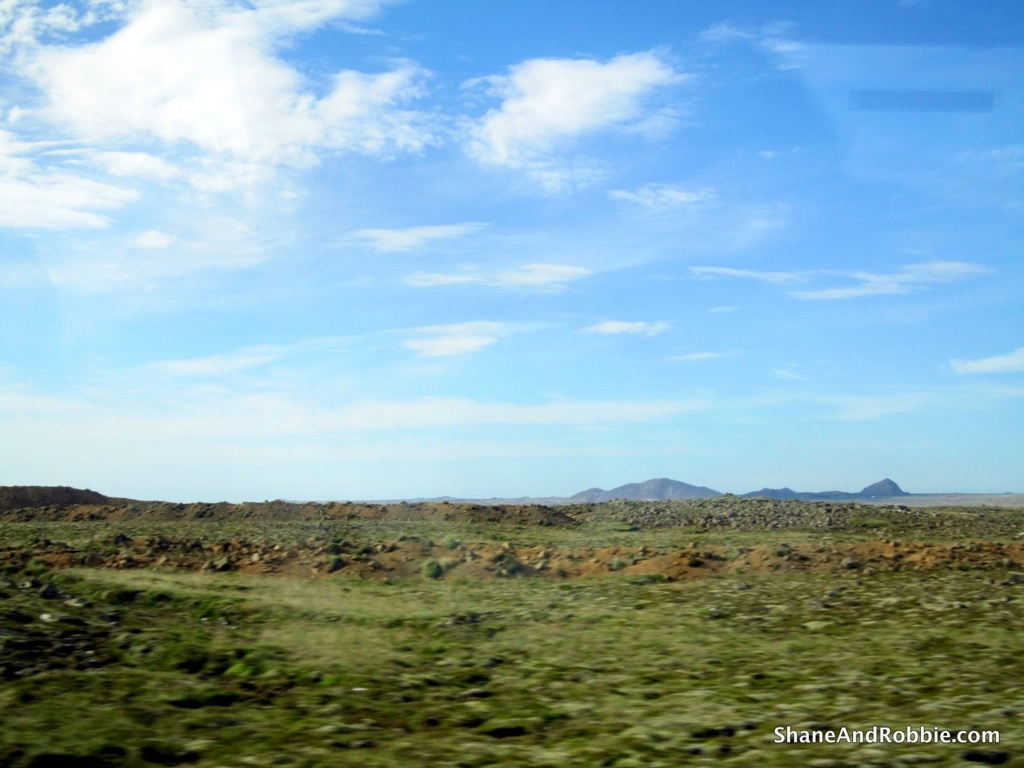 The unique landscape of Iceland, as seen from the windows of the bus from Keflavík International Airport to Reyjavik.

We flew directly from Copenhagen to Reykjavik this morning on a ridiculously early flight (we knew it was going to hurt when we booked it, but it was just so cheap!), which was not much fun, but did mean we had almost an entire day to explore our new home for the next week. We’re staying in Reykjavik for the whole week we’re here and exploring as much as we can of the rest of the island on day trips. Given Iceland is quite small (about 100,000km2), we’re actually going to be able to see a lot without having to move every 1-2 nights which is nice. We also decided to rent an apartment for our stay as we’re here long enough that it seemed worth it. The guesthouse we’re staying in has great 1 bedroom apartments and it’s right next to one of Reykjavik’s main tourist attractions: Hallgrímskirkja. 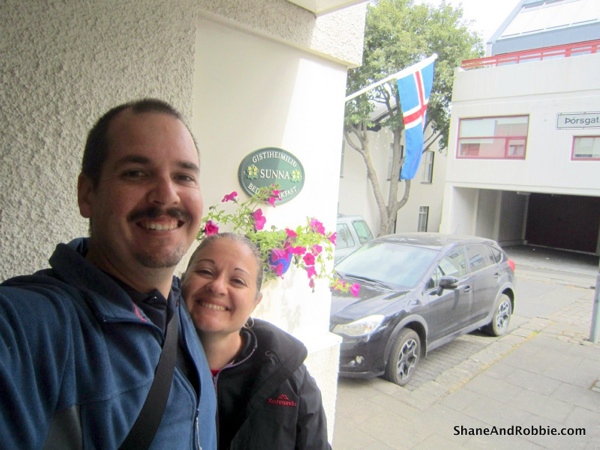 Guest House Sunna: our Icelandic home for the next week. 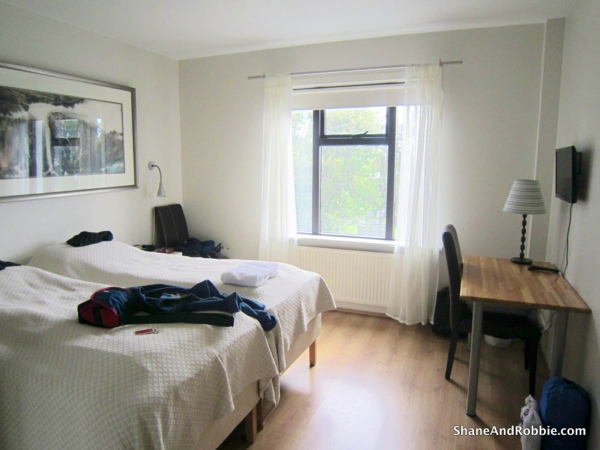 The bedroom (with some 10:00pm sun streaming through the window). 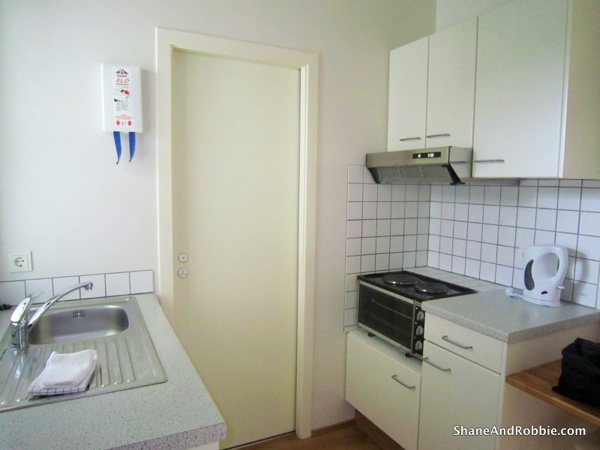 We can actually cook for ourselves in the kitchenette, not sure I remember how though…

Hallgrímskirkja is the main Lutheran Cathedral of Iceland. It was constructed in 1945 and is incredibly stark in its design,especially inside. And yet its the very simplicity of the church renders it so captivating and awe-inspiring. Also captivating is the statue in front of the church of Leif Eriksson, the first European to have set foot in North America. Nearly 500 years before Christopher Columbus made his way across the Atlantic, Leif, an Icelandic Viking, led an expedition from Iceland to Greenland, then on to the North American mainland. The statue was a gift to Iceland from the USA in 1930, commemorating the 1000th anniversary of Iceland’s first parliament. It’s amazing to think that whilst the rest of Europe was still picking the fleas of its butt, the Viking settlers of Iceland already had a system of elected leadership and parliamentary decision-making in place! 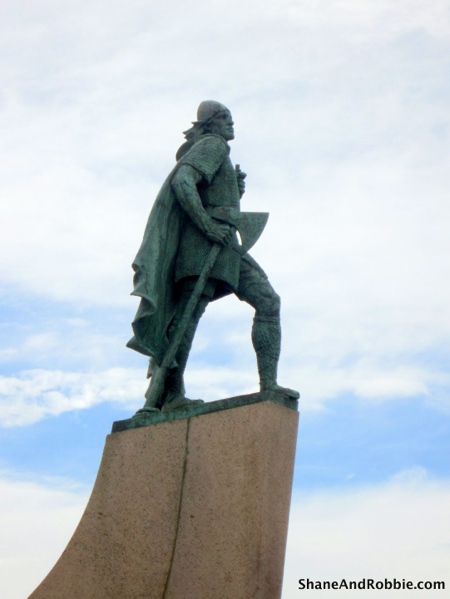 Leif Eriksson, the first European to have set foot in North America. 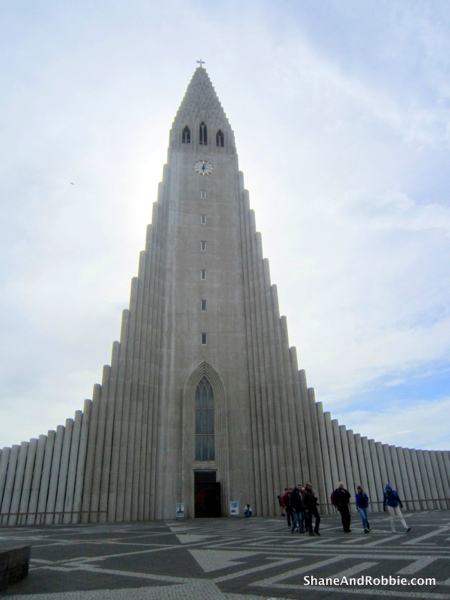 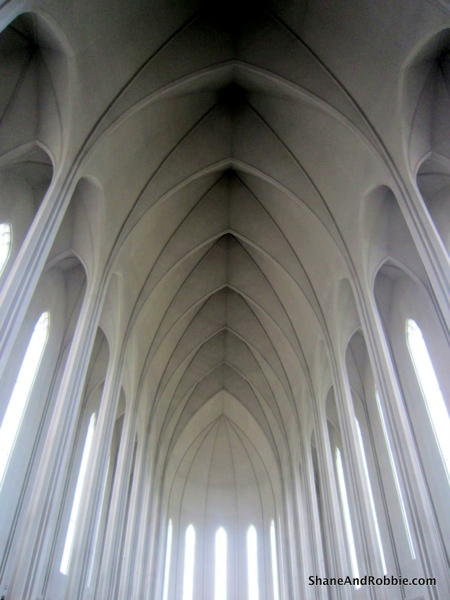 The stark interior of Hallgrímskirkja.

We really enjoy being able to explore a new city on foot, so once we’d checked in, unpacked and seen Hallgrímskirkja, we set out to see more of Reykjavik. With a population of about 200,000, Reykjavik is Iceland’s capital city and most populated area (there’s only 320,000 on the whole island). It’s a small town by most standards, but it’s quite cute. We went all the way down to the harbour as well where we saw The Harpa, a concert hall and conference centre built in 2010 that is just extraordinary in design; and The Sun Voyager, an iconic sculpture designed to capture Iceland’s Viking heritage and the spirit of exploration those early explorers must have had. 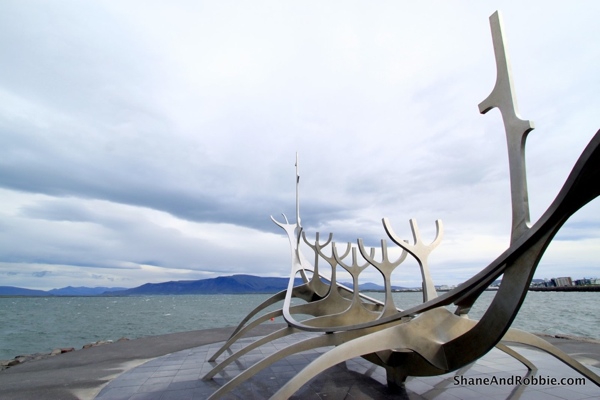 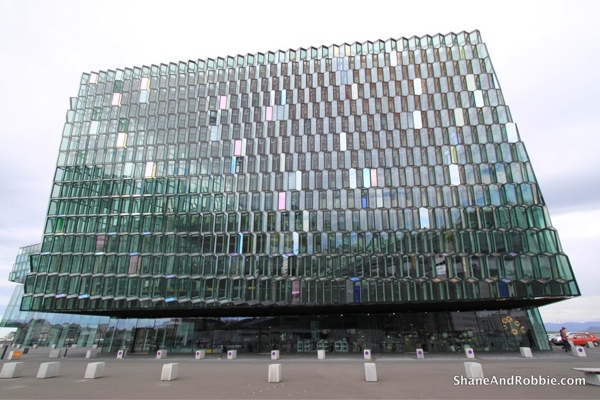 The harbour-front was pretty, but unfortunately we couldn’t hang around to enjoy it because IT WAS SO DAMN COLD WE ALMOST FROZE TO DEATH. We knew coming here it would be cold (like maximum temperatures of 10-15C cold), so we brought our thermal underwear, a couple of jumpers and our good wind proof, weather proof jackets. NOT ENOUGH. It’s not the 10-15C ambient temperature that was the problem, it was the 30-60km/h winds blasting us from the Arctic that left us looking like this: 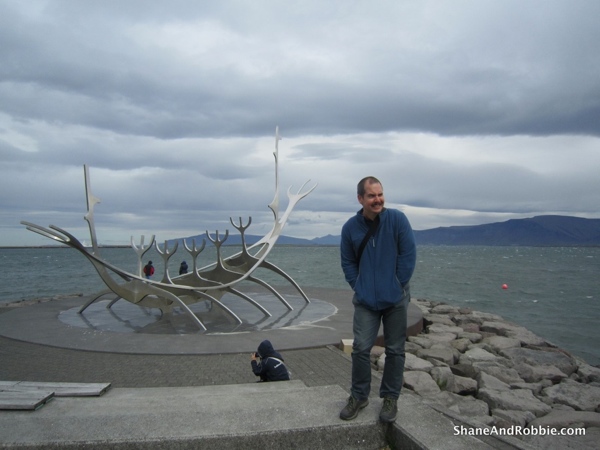 “Far out it’s cold out here! Hurry up and take the bloody photo!” says Shane. 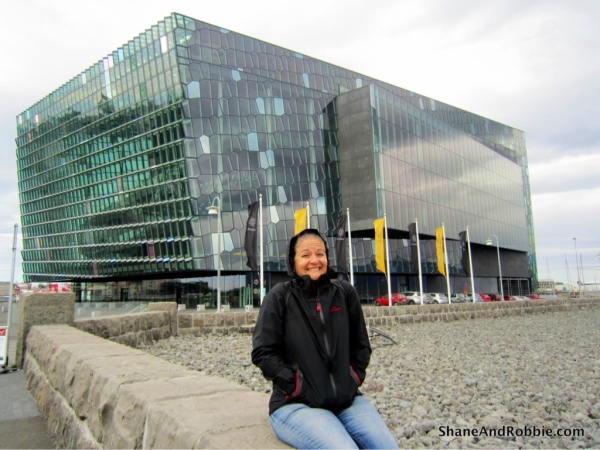 “I think my butt is frozen to this stone! Hurry up and take the bloody photo!” says Robbie.

Fortunately the winds settled down later in the day, the clouds dissipated and we were able to venture out again a little later on to wander the streets a bit more. With the sun out, it was just beautiful out. And with less of an Arctic breeze, it was far more pleasant touristing weather!
A Note on Iceland’s Weather
Cloudy and windy in the morning, blue skies and not a zephyr in the afternoon? Nothing unusual ’round here apparently. We discovered today that Iceland can be very WINDY (winds around 60km/h are common all year round!), but that the weather is also notoriously variable; so much so that the locals have a saying: “If you don’t like the weather, just wait 5 minutes”. Generally though the climate here is surprisingly mild, given how far North the country is (temperatures don’t often get below -5 or above +15, all year round). The secret to Iceland’s inhabitability is the North Atlantic Current and the Gulf Stream which bring with them warm air which helps keep average temperatures higher than in most places of similar latitude. 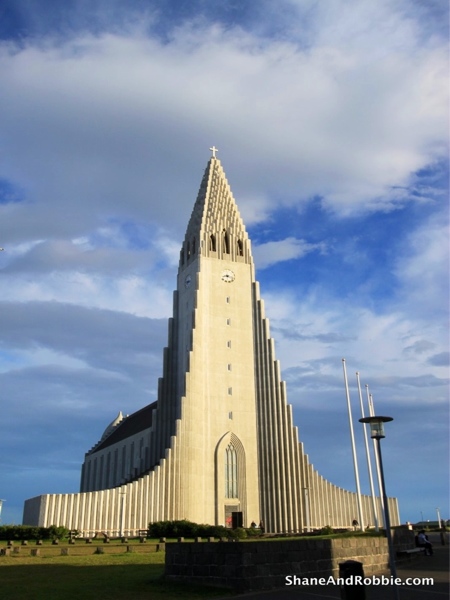 Hallgrímskirkja late in the sunny evening. 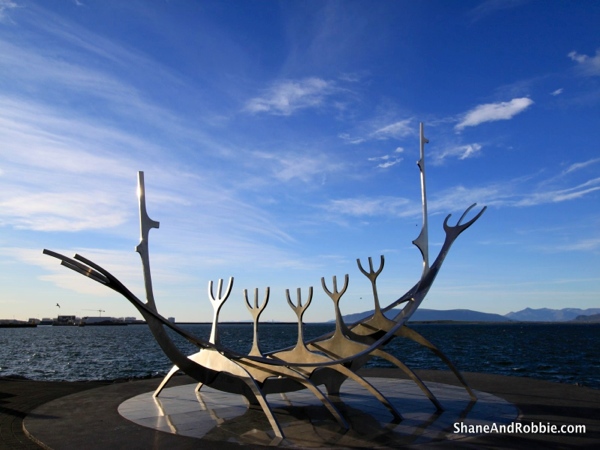 The Sun Voyager lives up to its name as the late evening sun reflects of it. 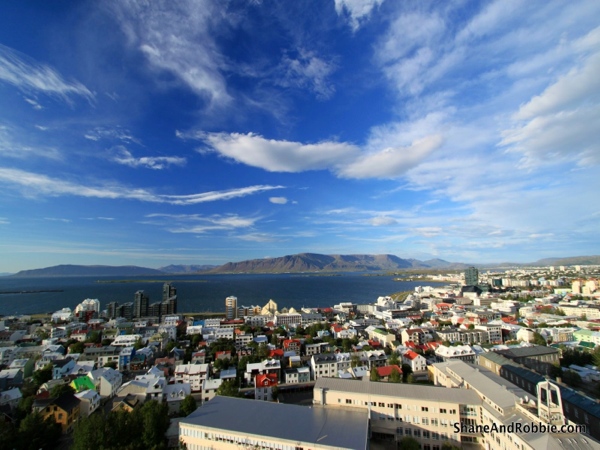 Views over Reykjavik towards the harbour. 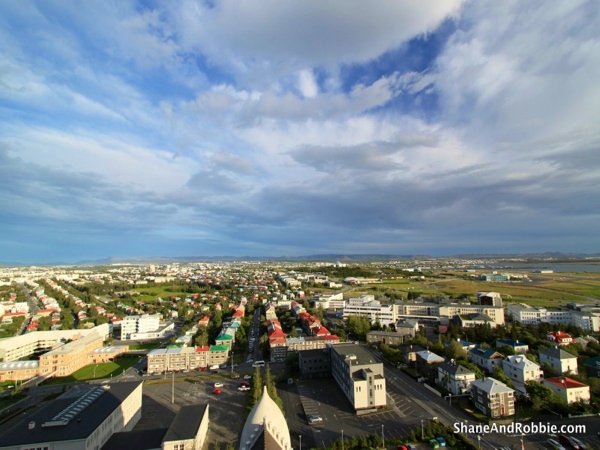 Views over Reykjavik towards the peninsula.

Can you see why, even though it’s only our first day in Iceland, we love it already? Here’s a few more things about Iceland we discovered today that just make us love it more and more: