DAY 68: BLOWN AWAY BY ICELAND

For today’s Icelandic adventure we went to the Snaefellsnes, a rugged peninsula North of Reykjavik known for its mountainous terrain, fishing villages and beaches. This unique promontory is considered quite rugged and isolated, but is said to best exemplify Iceland’s coastline and showcase how its many fishermen live. Fishing is Iceland’s top industry, followed closely by aluminium manufacturing and tourism (can you believe 1 million people visited Iceland last year?!). Given that 96% of Iceland’s population live within a few kilometres of the coast, and that fishing has been a cornerstone of Icelandic life for literally 1,000 years, visiting Snaefellsnes seemed like a good way to understand a bit more about this fascinating country. The landscape on the peninsula was indeed mountainous and rugged, as you can see. 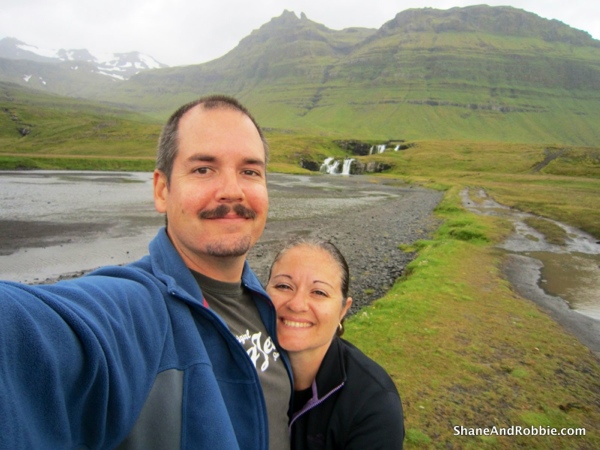 The rugged beauty of Snaefellsnes Peninsula.

It was a great day out, though the heavens conspired to keep us as wet and cold as possible. It rained virtually all day and the 60km/hr wind was frigid and incessant. We both came to Iceland expecting it to be cold and rainy, but even 4 layers of clothing (which included an inner layer of thermal underwear and an outer layer of water-proof Gortex) didn’t quite do the job. Iceland really tested our love today with its sideways rain and icy winds, but we’re still hanging in there! 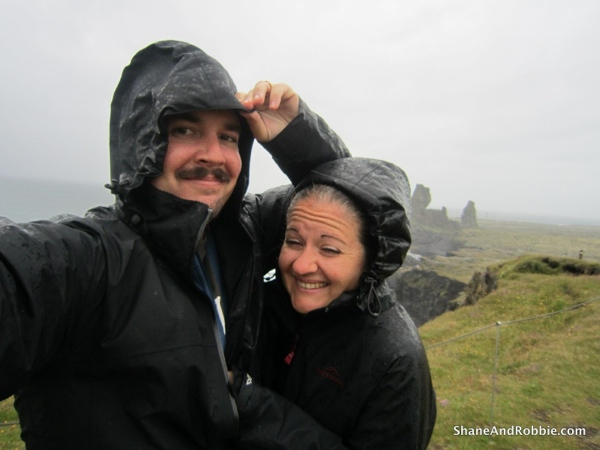 We still love you Iceland, even when you do THIS to us!

It was dark and rainy as we drove out of Reykjavik and North under (yes under – there;s a tunnel 150m below sea level) Hvalfjordur (translation = the whale’s fjord; so called because legend has it that the shallow, short fjord was formed by a giant whale slapping its tail and rending the land asunder). When we popped up on the other side of the fjord and the rain was really bucketing down, but our guide told us the weather is often better over the mountains on the Snaefellsnes Peninsula proper. So we persisted, eager to be across the mountains into the “better weather”. 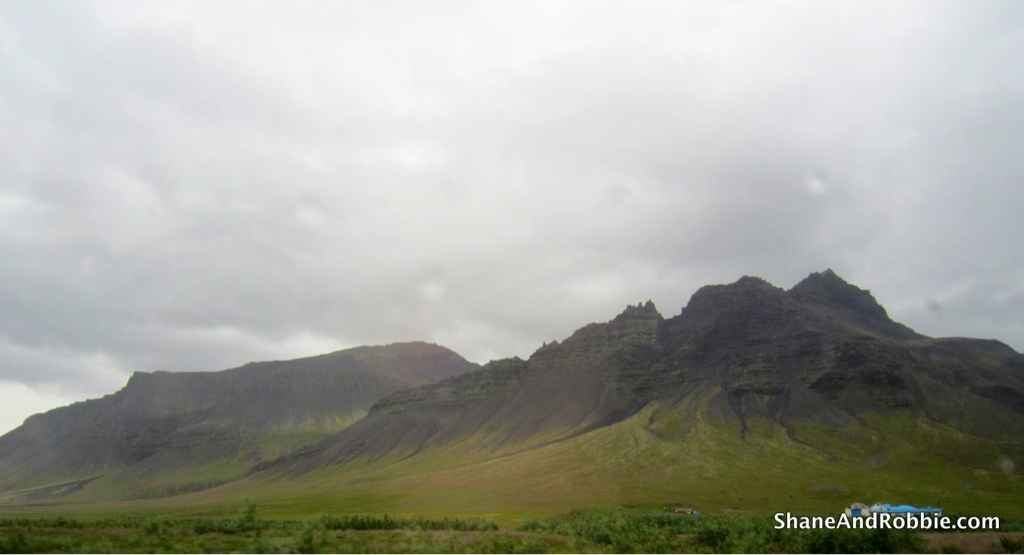 We were eager to cross the mountains, hopeful of better weather…

Across the mountains the first town we stopped in was Borgarnes, the capital of this fishing region. This town of 2,000 hardy souls sits at the mouth of the Borgarfjordur (translation = Borgar fjord) and is beautiful on a sunny day I’m sure. Today the steely skies painted the town grey and made the rising mountains along the fjord seem rather foreboding, though no less impressive.

Having by this stage accepted that today was going to be wet we were happy to continue on, knowing that at least we would be dry and warm in our little mini-van. At least we were until we reached the tiny fishing village of Langaholt and our guide informed us it was time to get out of our dry, warm mini-van and go for a walk on the beach. Seriously?! Sure, why not – 3C, Arctic winds and pelting rain… that’s PERFECT beach weather!! Why get out and go for a walk? Well, we were there to see Iceland’s only white sandy beach. Most of Iceland’s beaches are black, due to the volcanic sand, but the Löngufjara (translation = long beach) is a white shell-sand beach. I can’t say Löngufjara has anything on the beaches we have back in Aus, but it was certainly unique. 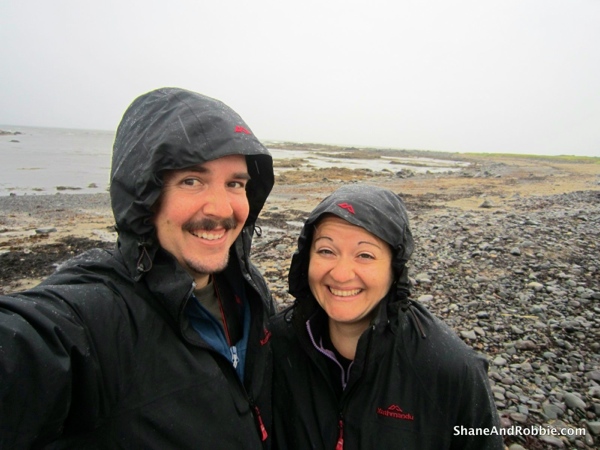 After our rather invigorating beach walk we were sooooo happy to get back in the heated minivan, and soooo scared when our guide pulled up a few minutes later at Budir to show us the blowholes and unique rick formations. *SIGH* Still, we’re only going to be in Iceland once (this time ’round anyway), so we got out and once again braved the elements. And it was totally worth it. Iceland is spectacular; the landscape is just so dramatic and wild. 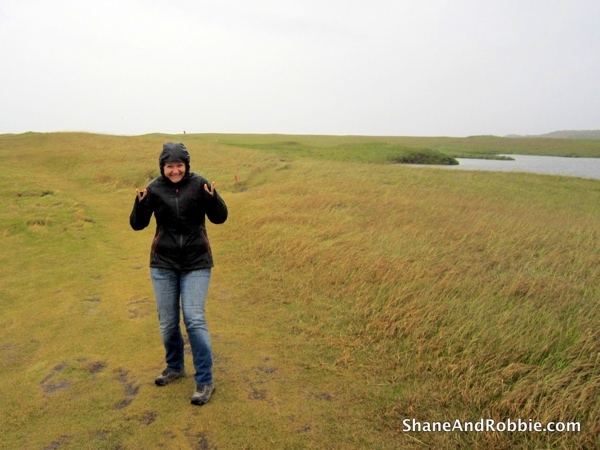 Braving the elements to check out the unique coastline at Budir. 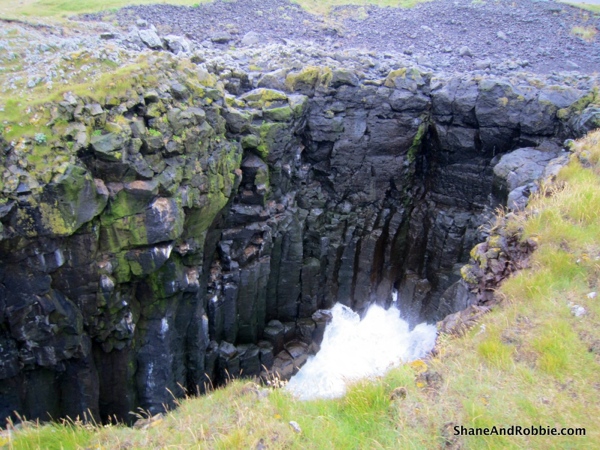 The blowholes were in full force, with the sea churning and boiling through the holes in the rocks. 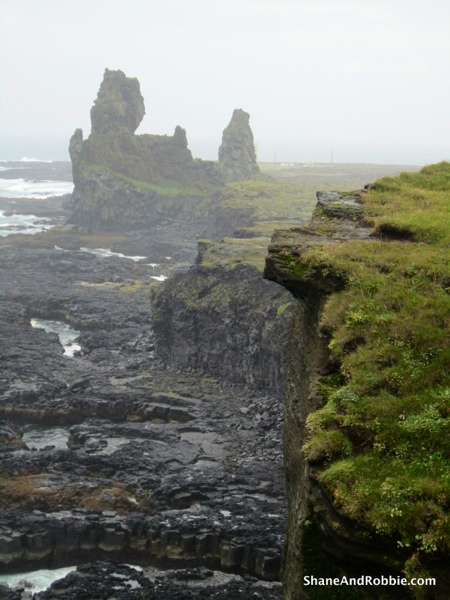 Even through the rain we could see how extraordinary the coastal rock formations were. 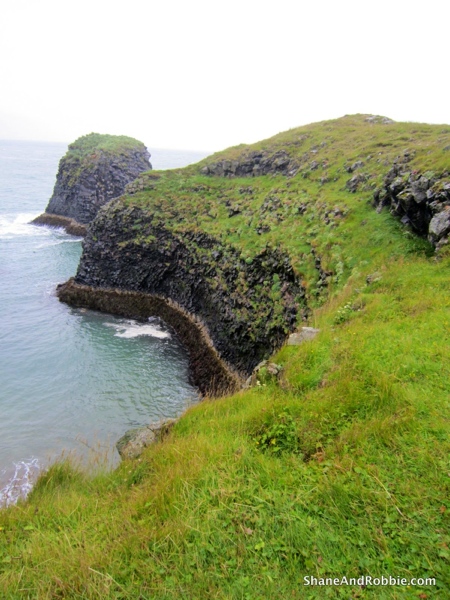 Next bracing stop was Dritvik Beach, where pieces of a wrecked fishing trawler that ran aground during a storm in 1943 can still be seen strewn across the black volcanic sand. On the beach there are also 4 big stones which used to be used by local fishermen to test their strength. The idea is that you have to lift the stone to at least hip height and hold it for at least 3 seconds for the lift to count. A man’s strength was then classified into one of 4 categories, depending which stone(s) he could lift:

“Weakling” marked the line between real men and boys; any man who couldn’t at least lift Stone #2 was deemed unsuitable for a life as a fisherman. Tough lot these Icelandic fishermen hey! These days the stones are mainly just lifted by tourists looking to prove themselves. Given the icy rain and gale force winds, Shane and I decided we really didn’t care to test our strength and just settled for a walk around and a quick photo of the beach. 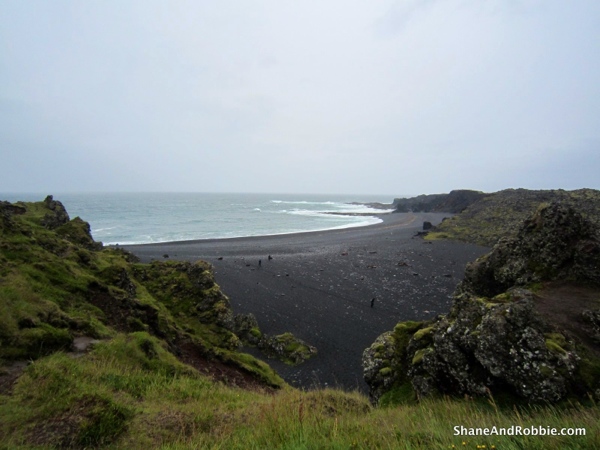 Dritvik Beach, where Icelandic fishermen used to lift big rocks to test their strength (and where tourists now go to do the same and injure their backs in the process).

By this stage it was lunchtime and we we were very grateful to find a warm, cosy restaurant in Hellissandur where they served hot soup and fresh bread rolls to frozen tourists at very reasonably prices. If you’re ever in this part of the world we can highly recommend the fiskisúpa (translation = fish soup) and the kjötsúpa (translation = lamb soup). We also recommend checking out the traditional Icelandic turf houses – they are so cute! There are a couple of these preserved in the village of Rif in Snaefellsnes and we got to have a look. The houses were built half underground or half in caves if possible, then covered in turf for insulation and protection from the harsh Icelandic weather. This style of housing continued to be used until well into the 20th century, especially in the more remote Western and Northern parts of Iceland. Farmers built the houses as conjoined twins, with one of the houses for themselves and the other for their farm animals. This way the animals were kept alive in winter and the body heat from the animals helped keep the humans alive too. The smells from the animals must have been a little ripe by spring though! 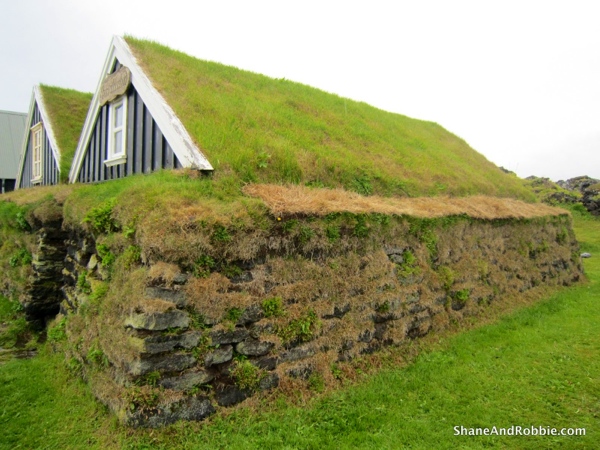 An example of the traditional Icelandic turf house. One for the humans, one for the cows, sheep and horses. 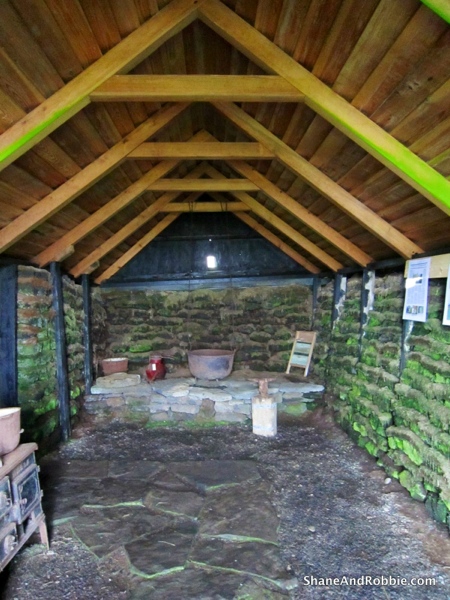 The inside of the human half of the turf house. Tiny but very warm in winter I’m sure.

By this stage we were around the Northern side of the Snaefellsnes Peninsula, behind the mountain range that runs up through the centre of this finger of land. This meant  we had some protection from the rain and those insane winds. Yay! It was still cloudy, but at least we didn’t feel like human icy poles. When our guide pulled over in Stykkisholmur to show us the harbour and Breidafjordur islands, we were actually really excited to jump out of the minivan and have a look around. 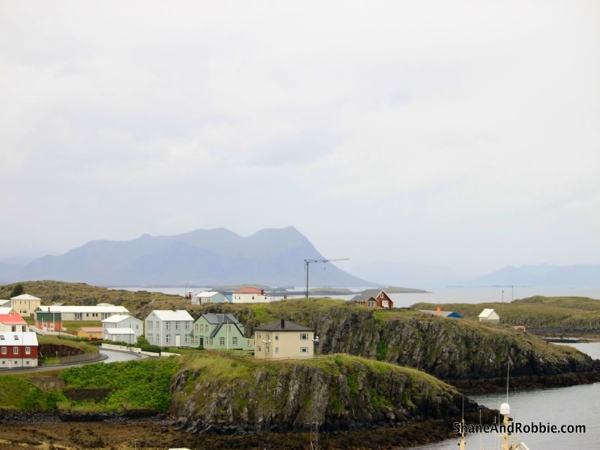 The fishing village of Stykkisholmur. 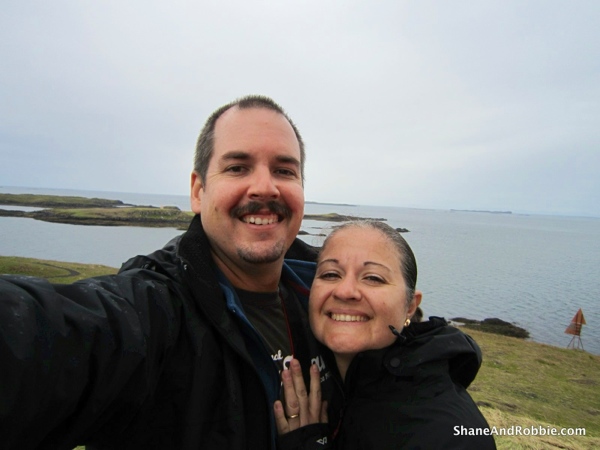 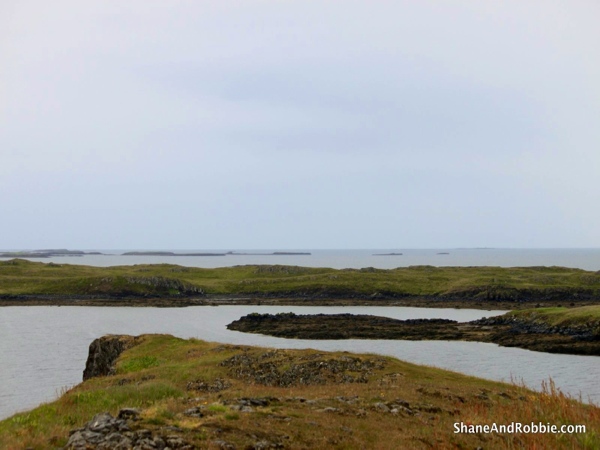 With the rain busy drenching the Southern side of the Snaefellsnes Peninsula, our journey along the Northern coastline became quite pleasant and we got to see lots of mountains, lava fields, rivers and waterfalls. This peninsula is one of the oldest part of the island of Iceland, geologically speaking, and the Northern coast gave us an opportunity to see 3 million year old extinct volcanoes, valleys formed by ancient glaciers and lava fields covered over by Icelandic moss. The drive back to Reykjavik was awesome, with some amazing landscapes and vistas. We’ve included below a few of our favourite photos from today – enjoy (we did)!

The rugged mountains of the Snaefellesnes Peninsula, Iceland.

Mountains towering before us as we drive through the Snaefellsnes Peninsula. 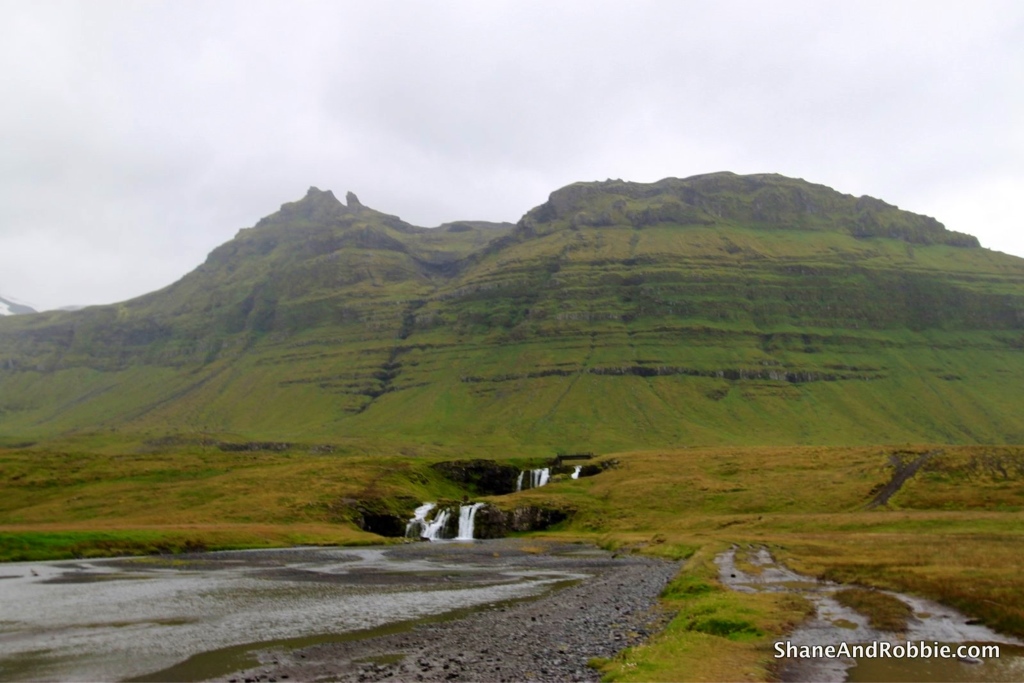 There is so much water here, cascading down mountain sides like this.

These immense valleys were carved out by ancient glaciers, grinding past the mountains on the way to the ocean.

Some of the farms were so isolated it left us wondering how they survive the long winter when roads can get cut off, the snow is thick on the ground and there are only 4 hours of daylight. 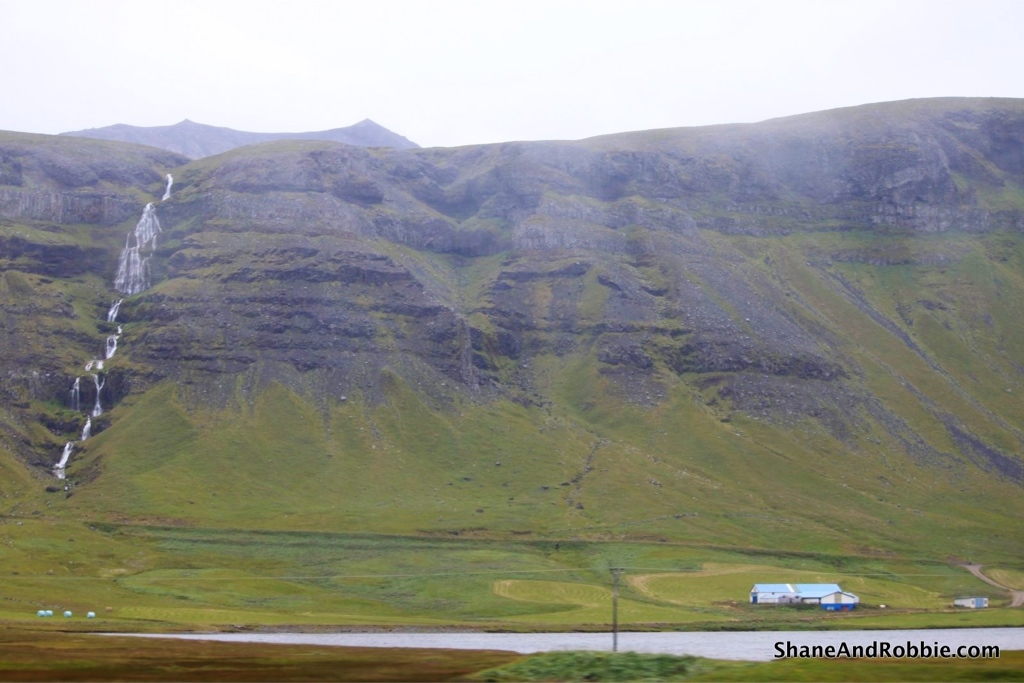 Many of the homesteads were dwarfed by the mountains around them. Iceland makes you feel very small and insignificant.