DAY 69: THE GRASS REALLY IS GREENER IN ICELAND!

Exploring Iceland’s South Coast by the light of the sun

Turns out Iceland was testing us yesterday; testing to see if we could really love this place, even when it’s cold, grey, wet and windy. Those that couldn’t hack it and left the island with their tails frozen between their legs obviously don’t love Iceland enough. We stuck it out though – we pressed on… and were suitably rewarded for our valour with a magnificent, sunny, wind-free day today. We woke this morning to see that yesterday’s rain, wind and freezing temperatures had been replaced by sunshine and blue skies. Yay!

We loved you before Iceland, when you were cold, wet and windy; but now we absolutely ADORE you!

The landscapes here are impressive enough, but add some sunshine into the mix and it takes your breath away. We were so lucky to have such a splendid day for our trip to the South Coast. This scantily populated area is Iceland’s main farming area; from the ocean to the foothills of the Central Highlands, the wide, flat lowland plains of the South Coast are divided into pastures for hundreds of kilometres. Most of the farms here are animal farms* (i.e. cows, sheep, horses) and the pastures are mainly used to grow grass during the short 2-3 months of summer; this grass is then turned into hay to keep the animals fed during winter. At the moment the fields are all so green it almost hurts to look at the fields when it’s this sunny!

*There is a little wheat grown along the South Coast too, and recently greenhouse-based farming (heated and powered by geothermal power) has also become more common in this area. Iceland is self-sufficient when it comes to fish, lamb, beef, dairy products and horses (we found out today they eat their cute little ponies, as well as ride them and use them as working animals), but most of the grains, fruits and vegetables Icelanders need are imported. Hardly surprising really!

The grass was so green at times it almost hurt to look at it!

The flat expanse of the Icelandic South Coast plains. 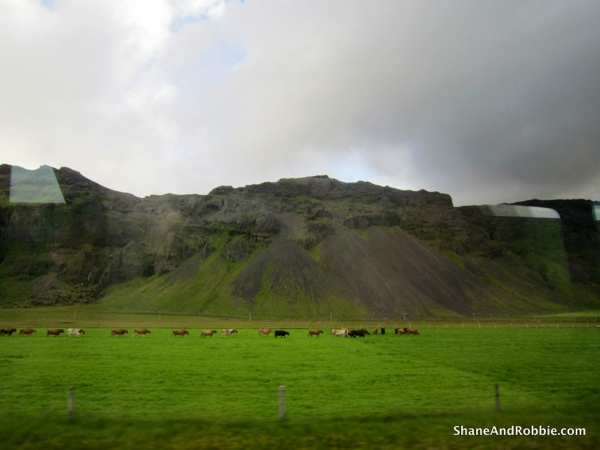 This is prime farming land, with pastures full of fat, happy cows, sheep and horses everywhere.

Geologically speaking it is the newest part of Iceland, with much of the land being just a few hundred thousand years old (very new compared to Snaefellsnes where we were yesterday that is 2-3 million years old, mainland Europe which is around 300-400 million years old and Australia which is about 3-4 billion years old). There are numerous active volcanoes on the southern side of the Central Highlands, including Eyjafjallajökull, the one that erupted in 2010, spewing millions of tons of ash into the atmosphere and disrupting air travel around the world. The mountain itself is only about 1650m tall and the crater is barely 3-4km is diameter, but it is one of Iceland’s more active volcanos. All around the base of the volcano there are farms, many of which were devastated after the 2010 eruption due to the ash cloud. As our guide informed us, however, the farmers banded together and worked to clear all the ash away; once the ash was cleared away, life went back to normal. I guess you have to be pretty resilient living under the shadow of an active volcano that erupts every few years!

Farms at the base of the infamous volcano Eyjafjallajökull.

Some of the farms at Ellie’s base still had the original turf houses standing. You can just make them out in this photo to the left of the modern farmhouse.

Our tour today took us out of Reykjavik, past the now familiar steaming geothermal power plants and over the hills that surround Iceland’s capital city. As we crested over the hills, it was awesome seeing the South Coast open up below us.

Driving past the steaming vents of one of Reykjavik’s geothermal power plants. 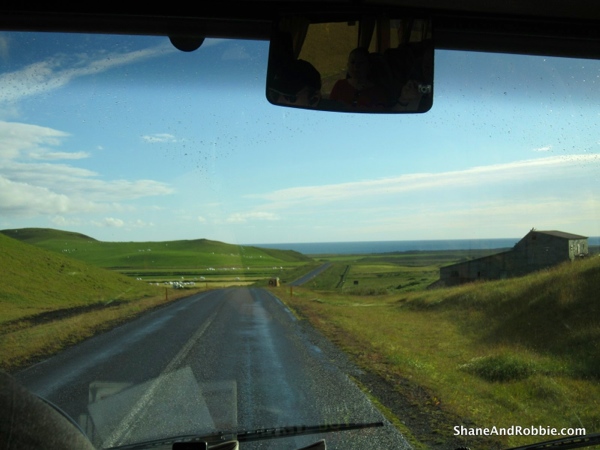 Cresting over the hills behind Reykjavik, with the South Coast plains opening up in front of us.

First stop was Skógafoss, one of Iceland’s tallest waterfalls. The Skóga River plummets 62m here, carrying glacial melt and snow melt waters down from the Central Highlands. The cliff the waterfall cascades down used to be a sea cliff, when this part of Iceland was under water (today the sea shore is 5km away); now though it is an easily accessible slice of Icelandic wonderland. 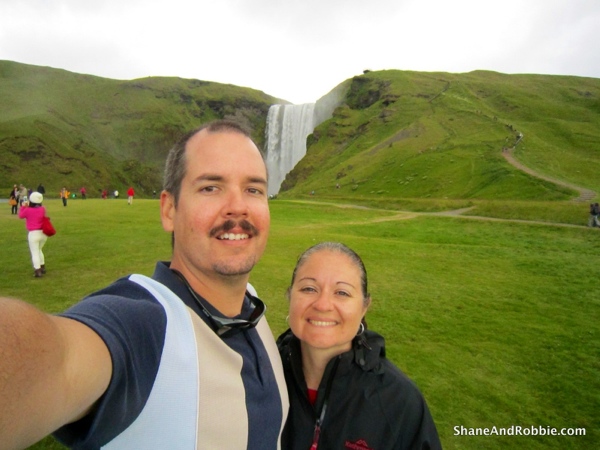 Skógafoss, one of Iceland’s tallest waterfalls. And us.  Look – we’re not wet and barely cold

The epic drop of Skógafoss. 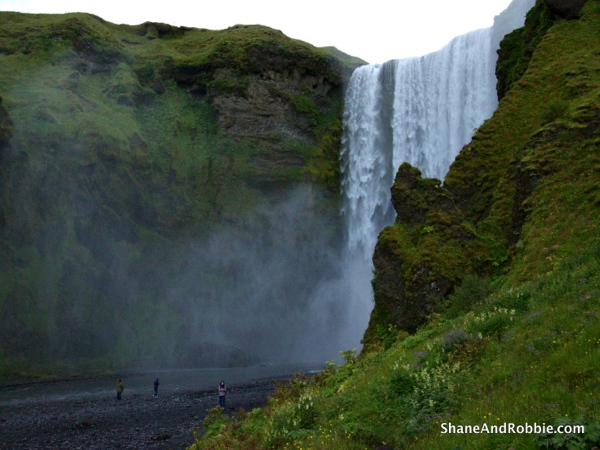 The beauty of Skógafoss, one of Iceland’s tallest waterfalls (note size of people in the foreground for perspective).

From Skógafoss we carried on to the village of Vík where we had ample time to get lunch and explore the village. This tiny hamlet of 300 people is famous in Iceland for its wool and the jumpers they knit. This may not seem like a big deal but Icelanders take their jumpers VERY seriously (understandable given the weather). Traditional Icelandic jumpers all have 3 things in common: they are incredibly warm; they’re made from the softest of wools (not itchy at all); and they all have a decorative yoke around the neck (the design resembles fragments of a snowflake to me). These lopapeysa (translation = woollen sweater) are sooo common here – everyone wears them! 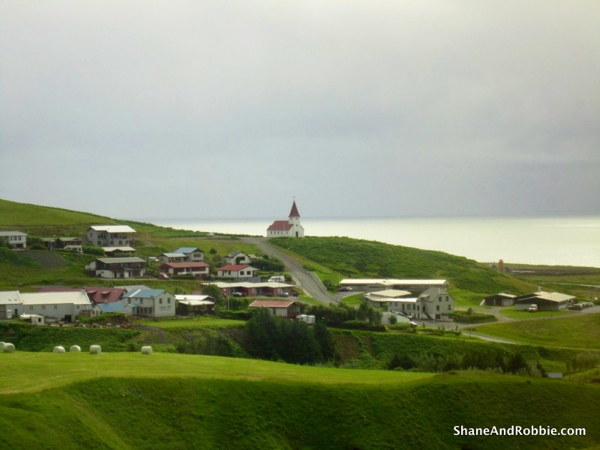 The village of Vik. Famous for its wool and woollen jumpers.

The view back to Vik from the beach.

From Vík we also got to go down to black, basalt sand beach to see the Reynisdrangar Rocks and go puffin-spotting (Iceland is home to most of the world’s Atlantic Puffins – about 10 million of them nest here during the breeding season). Unfortunately we saw no puffins (they must have been out of their burrows enjoying the sunshine too), but loved the Reynisdrangar Rocks. These craggy basalt stacks are the remnants of much larger cliffs that used to stand there tens of thousands of years ago. The cliffs have been eroded by the wind and waves – there is no landmass between Vik and Antarctica and, consequently, the ocean there can be pretty rough. According to Icelandic legends the Reynisdrangar Rocks were formed when 2 trolls were trying to drag their ship to land; they took too long to get ashore and turned to stone when daylight broke.

Vik’s black basalt beach. And us. 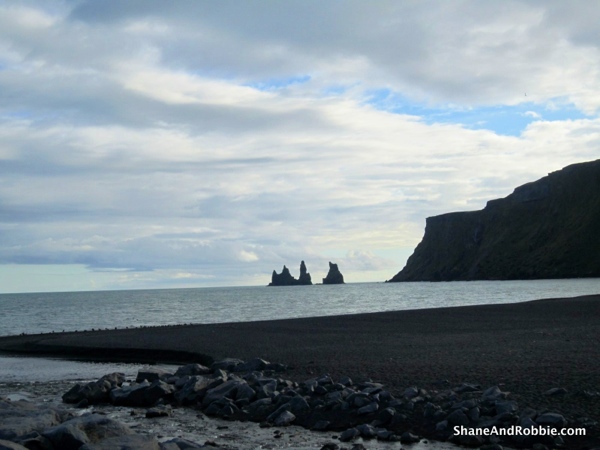 The Reynisdrangar Rocks near Vik. Can you make out the 2 trolls and their ship?

Vík lies directly beneath the Myrdalsjokull glacier, which itself sits atop Katla, one of the biggest and baddest volcanos in Iceland. Katla has a caldera over 10km wide and erupts every 50-100 years (the last big eruption being in 1918). When it last erupted Katla spewed out so much lava that the southern edge of Iceland expanded by 5km! We didn’t go onto the glacier but admired it from afar, watching it sparkle in the sunshine.

We could see the glacier sparkle in the sun from our vantage point.

Finally, from Vík we wound our way back along Iceland’s Route #1 (the island’s ring road) to Seljalandsfoss. This 60m high waterfall is unique in that you can walk behind it to get a great view out into the surrounding wilderness. It was wet and slippery back there but very cool (actually it was bloody freezing – that water is straight off a glacier!). 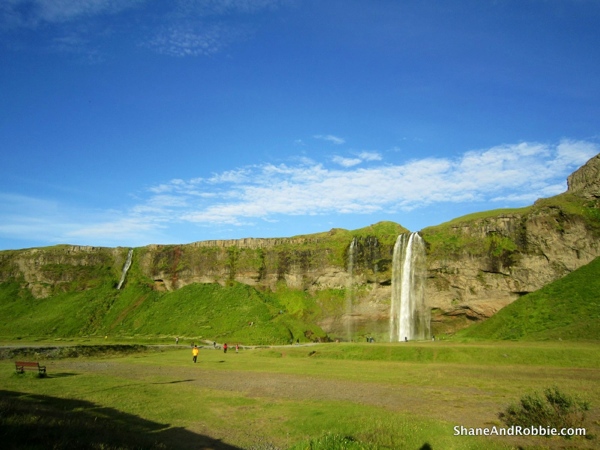 Seljalandsfoss waterfall from the front….

….and from the back.

On the drive back to Reykjavik we were able to enjoy more glorious sunshine and epic views, sending our grateful thoughts out to the powers that be for a marvellous day up here in The Land That Time Forgot. 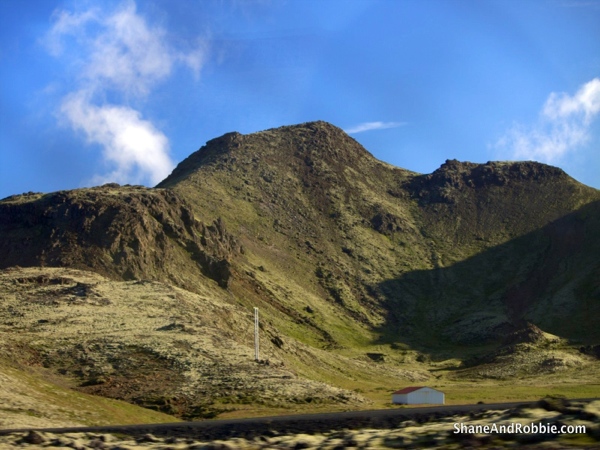 Just watching the scenery roll past…