Welcome to Dresden, capital of Saxony!

We left the lederhosen and “oompah” bands of Bavaria behind today and made our way by train to Dresden, some 470kms North-East of Munich. Dresden is the capital of Saxony and is only 70kms from the Germany/Czech border. The city is situated in a valley along the banks of the River Elbe and is surrounded by vineyards and the sandstone mountains of the Sächsische Schweiz National Park at its doorstep. Most of the Baroque and Rococo-style buildings within the altstadt (translation = old town) are lined up along the riverbanks, making for a stunning cityscape.

Once part of communist East Germany, the region of Saxony is endeavouring to catch up with its neighbouring former West German states. Economically this region is growing, but unemployment here is almost double the German national average of 6.5% and there were signs as we crossed from Bavaria into Saxony that this area is somewhat less prosperous. We passed a number of giant, empty factories, for example; and in a few of the smaller towns the train passed through, the shells of empty buildings loomed either side of the railway tracks – their broken windows and graffiti-covered walls a testament to the challenges faced due to the reunification of Germany in 1990. We wanted to visit Dresden because we wanted to see something of the former East Germany, and with its rich history, this seemed like a perfect place to base ourselves for a few days.

Though this is still most definitely Germany (i.e. 6-packs of Heineken in the supermarket for 4Euro, 6 varieties of schnitzels available from every restaurant, and street vendors selling more types of wurst than you could ever imagine!), there is distinctly Slavic flavour to the cityscape (not surprising since, for the past millennia, Saxony has alternated between being a free kingdom, a Slavic state and a part of the German empire). The landscape is different too; as we left Bavaria behind the rolling green farmlands were replaced by dense forests and large hills, separated by deep, steep valleys.

Leaving the rolling hills and farming villages of Bavaria behind… 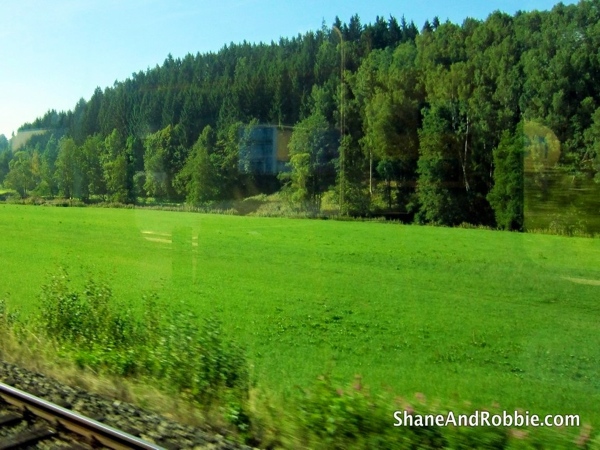 …which was replaced by dark green forests and… 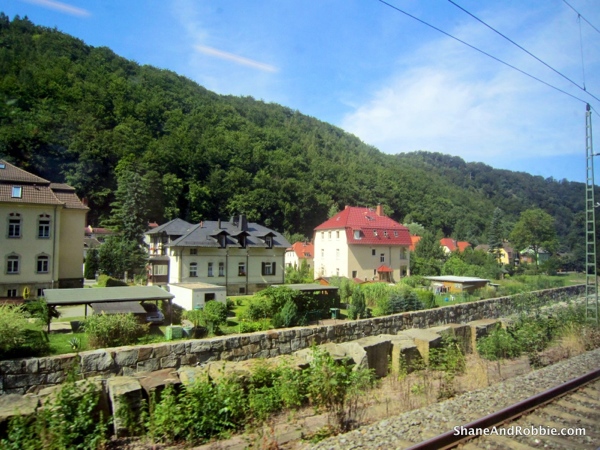 When most people think of Dresden, they think of the annihilation the city suffered on 13 February 1945, when the Allies dropped almost 4,000 tons of bombs on the city. The altstadt was destroyed and tens of thousands of civilians killed on this tragic day. Most of “historical” buildings that characterise Dresden are therefore actually reconstructions, built in the last 50 years in an attempt to restore the city to its former majesty. And some are in fact just 10 years old, rebuilt only after the 2002 floods this part of Europe suffered. Not that we are experts by any means, but all the new “old architecture” certainly looks great to us! We had a great afternoon doing our usual City-WOT (Walking Orientation Tour) and familiarising ourselves with our new home. First stop of the day, though, was lunch. You’ll be happy to hear we’ve come back from the brink of our “pork overdose” and were able to once again ingest a couple of Germany’s finest Weinner schnitzels today – something Shane was particularly excited about!

Shane was very excited about being able to tuck into a lunchtime schnitzel. And what meal in Germany would be complete without a 500mL stein of the local brew?

The backdrop to our lunch. Some of the new “old” buildings around Dresden’s Altmarkt Platz (translation = Old Market Square). 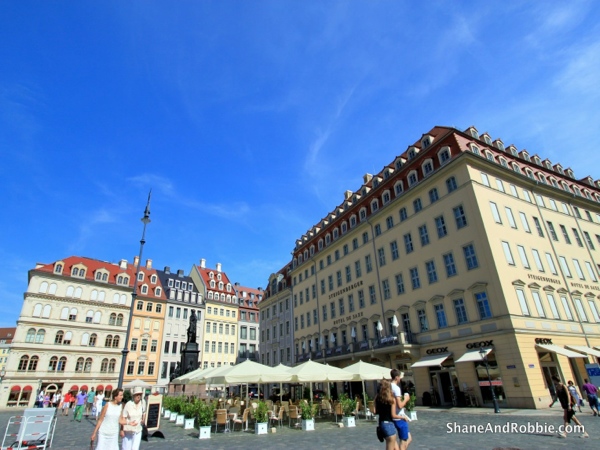 In its time, Dresden was considered Germany’s Florence; a Renaissance jewel and a centre of art, music and science. The city really came to the fore in the late 1600s when Augustus I (nicknamed Augustus the Strong due to his reputed immense strength) gathered musicians, architects and artists and ordered the constructions of many of the city’s beloved public buildings, including: 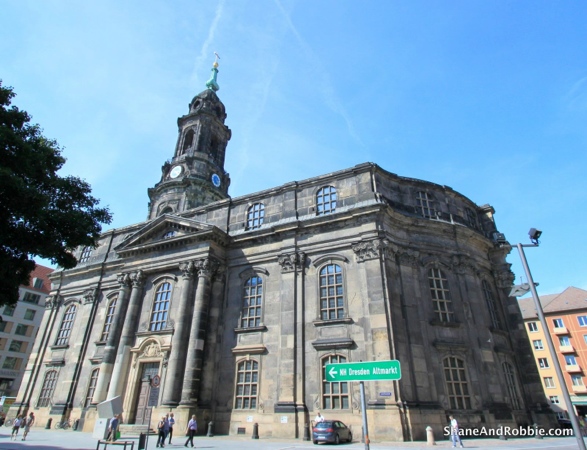 The imposing side facing of Dresden’s Catholic Cathedral.

The bright, light interior of the Catholic Hofkirche. 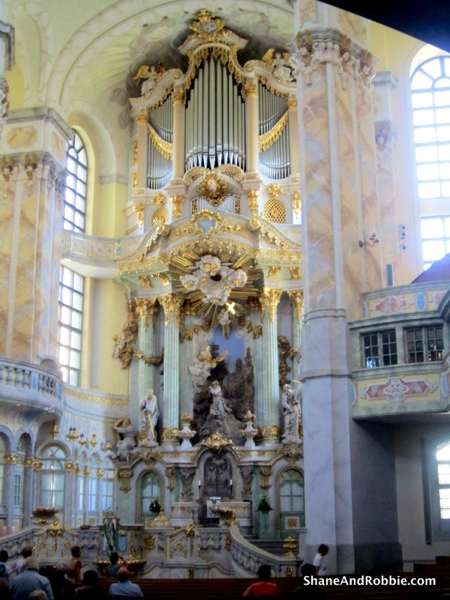 By contrast the interior of the Lutheran Frauenkirche was far more ornate. 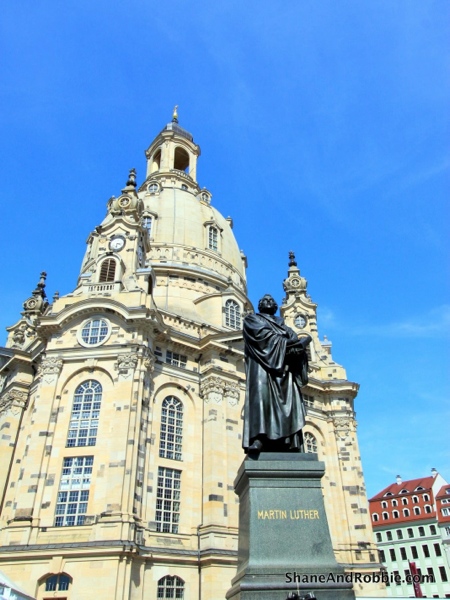 The Lutheran Frauenkirche, complete with statue of Martin Luther.

The Lutheran Frauenkirche, built in the late 1800s, stands facing into the NeuMarkt Platz.

The Dresden Academy of Fine Arts.

These golden angels crown the Dresden Academy of Fine Arts.

My personal favourite historical masterpiece of the day, however, was the Fürstenzug (translation = Procession of Princes). This large mural shows all the rulers of Saxony in chronological order; they are all mounted on horses and riding in a virtual procession through history. The first part of the mural was painted in 1871 to celebrate the 800th anniversary of the rise to power of the Wettin Dynasty (the Wettins were Saxony’s ruling family from 1071 to 1918, when all monarchies were removed across Germany). The Fürstenzug mural was continuously added to from them on and then, in 1904, in order to make the work weatherproof, it was replaced with approximately 23,000 Meissen porcelain tiles and is today the largest piece of porcelain art in the world. It’s so cool seeing almost 1,000 years of history laid out like that!

Even though we’ve only been here half a day, we’re really enjoying Dresden already – it’s small enough to feel comfortable (population around 500,000), but cosmopolitan and interesting enough in terms of art and history to be fascinating. I’m sure we’ll barely scratch the surface of everything Dresden has to offer in 3 days, but it sure promises to be a great 3 days! More awesome architecture and history to come tomorrow dear readers…

More to come from Dresden tomorrow!