Dresden is packed with people today! Overnight the city has morphed into a festival city of white tents, fun rides, portable breweries, whole animals on spit roast, and lots and lots of people…. 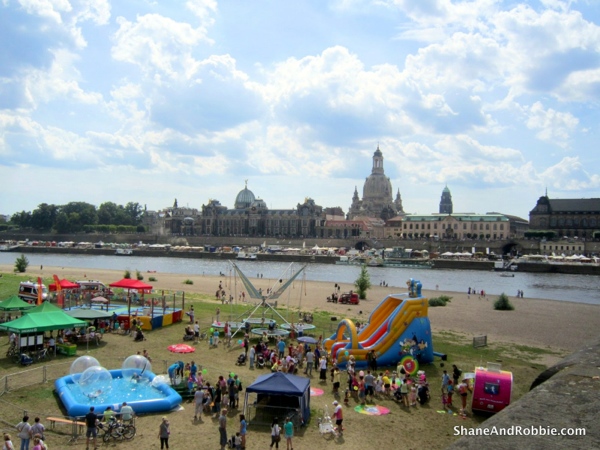 Where else could we get ferris wheels, fairy floss, pony rides and grand historical buildings, all side-by-side?!

We saw a few stalls being set up yesterday when we arrived but didn’t really think anything of it. Today there are market stalls, food stalls, temporary bier gartens and stages everywhere! We had no idea, but this weekend is the Staatsschauspiel Dresden (translation = Dresden Folk Festival). This music and arts festival is an annual event and is designed to showcase Dresden’s best local talents. There are hundreds of food stands and markets stalls, with local potters, glass blowers, silver-smiths and other craftsmen all displaying and selling their wares. There is a stage set up in every square and a very wide variety of music playing (from folksy German tunes to hard rock and dance). There are plays and operas and concerts on in all the theatres and at the Semper Opera House… it’s awesome! The city is packed full of people too, and everyone is very much into the festival spirit (i.e. there were lots of German people out drinking beer at 9:00am this morning). As if this city wasn’t cool enough, we now have free entertainment and an endless variety of beer, wurst and pretzels to enjoy as well!

One of the many market stalls around. This one was selling various types of flavoured brandies.

As well as partaking in the festival fare, we also caught one of those “Hop-on/Hop-off” buses today so we could see a bit more of the city. The bus took us around the altstadt, past some of the sights we saw yesterday and then further along the River Elbe to a part of the old town we hadn’t seen. We hopped off there to visit the Semper Opera House and Zwinger Palace, two of Dresden’s most beautiful historical buildings. 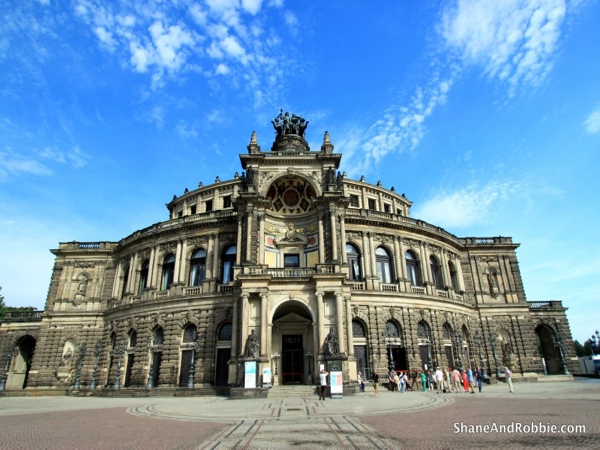 The Semper Opera House was designed by Gottfried Semper (hence the name) and built in 1841. At the time it was regarded as one of Europe’s finest opera houses and many German opera premiered here in the 19th century. The opera house was completely destroyed by the Allied bombing of Dresden in February 1945 and was only reopened in 1985. 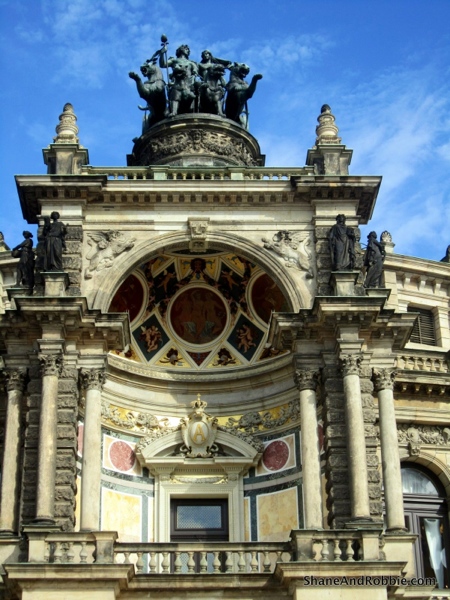 The stunning front facade of the Semper Opera House.

The highlight of the day was definitely the Zwinger Palace, Dresden’s former royal palace. Dresden only became the official capital of Saxony in 1485 after the House of Wettin moved the court from Meissen (a small town about 25kms North of Dresden) and the original royal residence in Dresden was a rather small medieval castle. In 1710, however, King Augustus the Strong (that famously strong leader of Saxony who used to bend horse shoes with his hands for fun) ordered this ornate Baroque palace built instead. Apparently Augustus ordered the construction of Zinger Palace after returning from a grand tour of France and Italy; he loved Versailles so much basically that he wanted one of his very own. Ah the joys of being King!

The palace was razed during WWII but was rebuilt during the 1950s. The reconstruction was complete in 1963 and since then the palace has housed 11 different museums. With its beautiful facings, manicured gardens, courtyards and fountains, the palace was amazing. It made us realise how very wealthy the kingdom of Saxony must have once been! 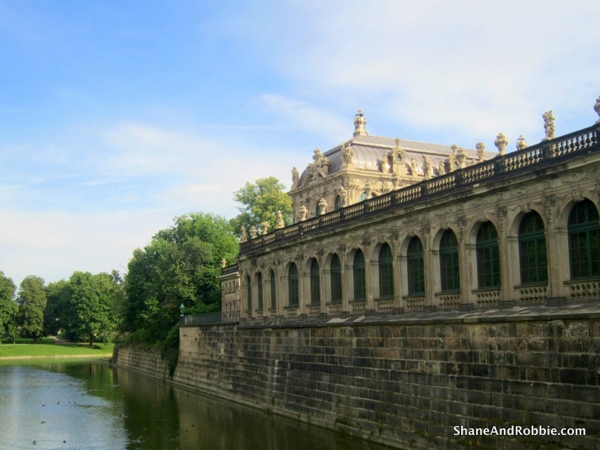 Some of the original moat was restored. Water diverted from the River Elbe keeps it full.

“Yes! Another palace to visit! I love palaces!” Shane was very excited about visiting Zwinger Palace.

The manicured lawns of the immense Inner Courtyard.

Zwinger: more palace than you could possibly see in a day!

The detailing along all the facades was amazing. The amount of work it must have taken to completely rebuild Zwinger boggles the mind!

One of the beautiful private courtyards, complete with contemplative fountains.

Another of Zwinger Palace’s beautiful fountains.

After getting our fill of palatial beauty we hopped back on the bus and went around to the Neue Rathaus (translation = New Town Hall).  Built in 1910 this relatively new structure is topped by a 5m tall golden statue of Hercules (designed to represent the unfailing strength of the people of Dresden). It was destroyed in WWII but rebuilt in the 1970s and still houses the city’s administrative centre today. 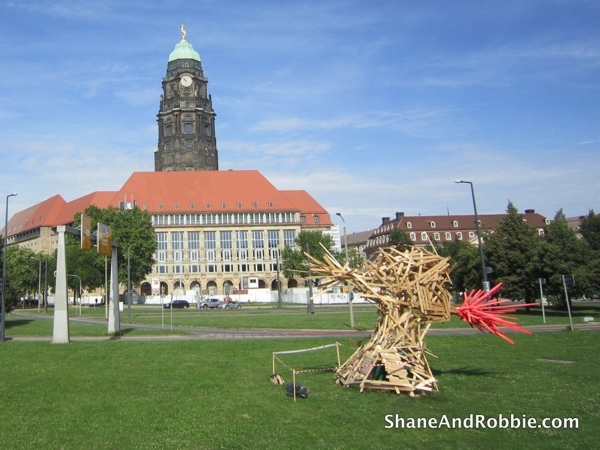 Dresden’s Neue Rathaus, complete with golden statue of Hercules and a some kind of modern sculpture in the foreground.

From there the bus took us out of the altstadt into the riverside areas of Blasewitz and Loschwitz. Tucked up in the Saxon hills, these outer parts of Dresden were historically where the city’s elite, rich and famous had their homes and/or summer homes. These areas were not destroyed by bombing during WWII and many of the 18th and 19th century villas are still standing, beautifully maintained. There are even a few small castles and palaces remaining that once belonged to “minor” Saxon royals. This was a very pretty part of Dresden that gave us some insight into what the city must have been like before WWII.

The outer suburbs of Dresden did not suffer much damage in WWII and are good exmaples of what the architecture in the city used to look like.

Moving even further out of town we passed through the area of Blasewitz, where Dresden’s elite had (and still have) their mansions and summer houses.

Crossing over the River Elbe into the semi-rural Loschwitz region.

This old castle in the Loschwitz region is today a 5 star hotel. On our budget we could only look at it from afar…

Our final stop on the “Hop-on/Hop-off” tour was on the Northern side of the River Elbe. Here we stopped to admire the historical city from the afar, marvelling once again at its elaborate architecture. It is definitely a great city and well worth visiting, especially during the Fold Festival!

Admiring Dresden from across the River Elbe. This is a very cool town!