Welcome to one of Europe’s premier cities!

We’re in Berlin! We’re so excited to be here in Germany’s cosmopolitan, multicultural capital city – home to 3.5 million permanent residents and, in 2012, 9 million visitors. Divided for most of the 20th century, this city has had to reinvent itself since the reunification of Germany and the removal of the Berlin Wall in 1990.

I still remember vividly when the Berlin Wall came down; even at 13 I understood I was seeing something profound unfolding. A friend of mine’s father went to Berlin in 1990 on a business trip and he brought back a couple of pieces of the Wall for us. I still have that fragment of graffiti-covered masonry at home – it’s a tangible reminder for me of the changes that swept the world in my lifetime; of the end of the Cold War, the lifting of the Iron Curtain, the collapse of the once seemingly all-powerful Eastern Bloc, and the move towards a less ideologically fragmented world. Since the day I watched the Berlin Wall come down I have wanted to come here and see it for myself, and today we did! 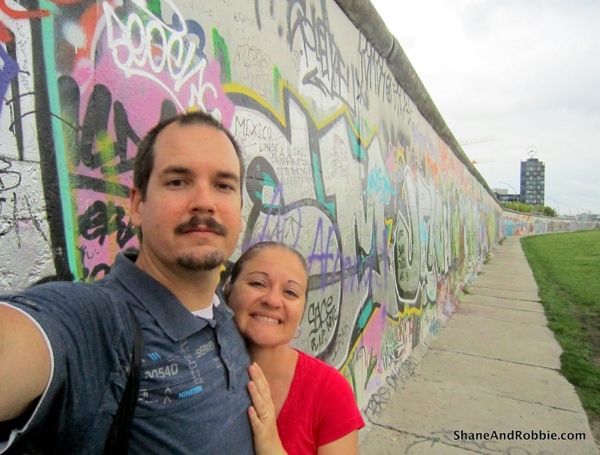 The barbed wire, watch towers and guards with guns are gone now, but you can still get a sense of imposing a barrier the Berlin Wall must have been. Much of the graffiti on the Western side is typical street art – tags and narcissistic crap like “Sam was here 2010” and “Mary loves John 2009” scrawled on the concrete; but some of it is more political and speaks of the desire of West Berliners to see their compatriots from East Berlin freed. 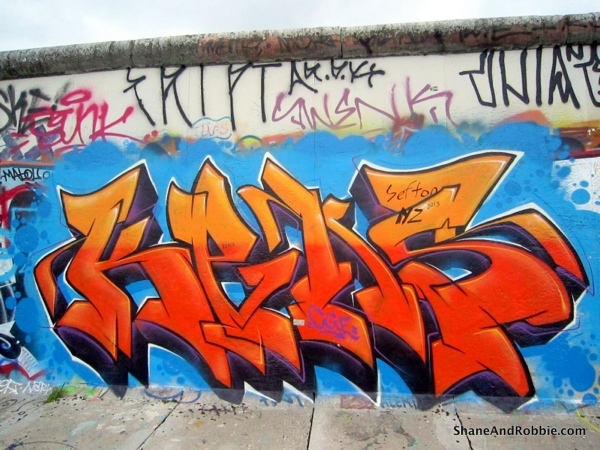 Graffiti on Western side of the remaining section of the Berlin Wall. 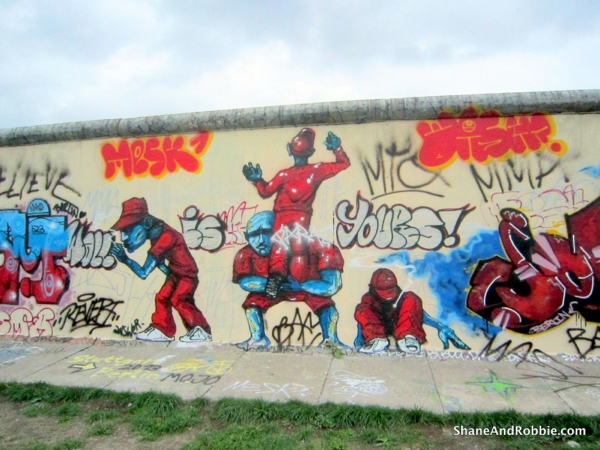 Some of the graffiti on the Western side of the wall was a bit more interesting, like this one.

The murals along the Eastern side are very cool. Some of them were quite dark and macabre, others joyful and full of hope for the future. It was interesting seeing how different artists had chosen to capture the moment. These are just a few of our favourites… 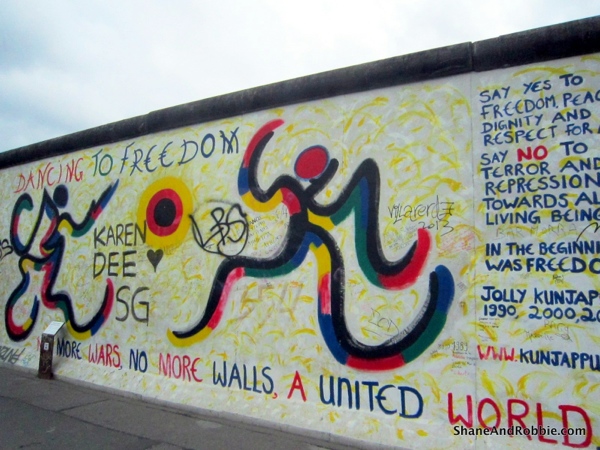 One of the murals on the Eastern side of the wall. This one, called “Dancing to Freedom”, calls for no more wars, no more walls and a united world. 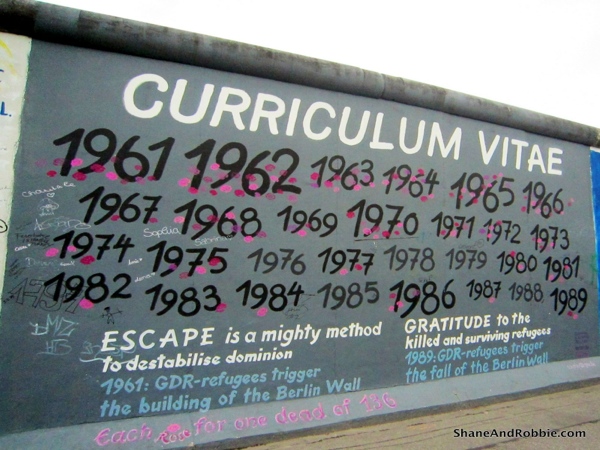 This mural was dedicated to all the East Germans who died trying to cross the wall. As it says in pink at the bottom: each rose for one of the dead (136 in total). 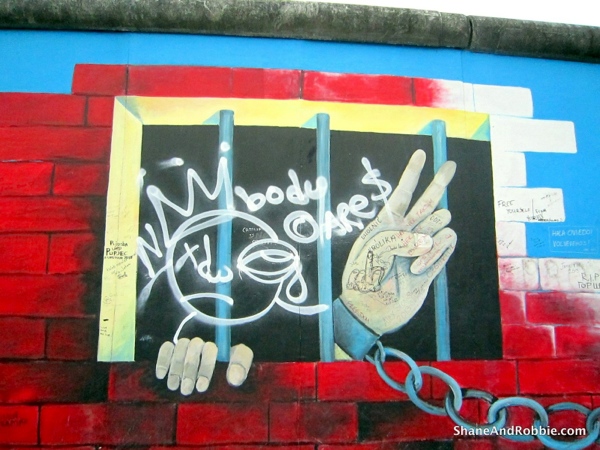 In chains and behind bars, yet still calling for peace. 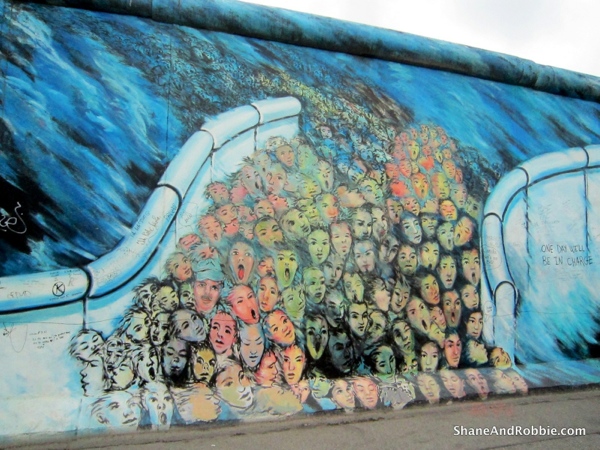 Maybe this artist was trying to capture the moment the wall came down and the flood of humanity and hope that passed through that first gap in the wall.

Founded in the 13th century, Berlin has always been a premier city – first as the capital of the small state of Brandenburg (1237-1700), then as the capital of the Kingdom of Prussia (1701–1870), the German Empire (1871–1918), the Weimar Republic (1919–1945), the German Democratic Republic (i.e. East Germany) (1946-1990), and now as the hip, happening and über-cool capital of a reunified Germany. Berlin’s history has left the city with an eclectic mix of buildings; apparently each of the national governments based in Berlin had their own ideas on what the city should look like, each adding to the city’s architecture. The result is a cityscape unlike any we’ve seen anywhere else; there are fancy steel and glass high-rises and some very funky ultra-modern commercial blocks, next to lovingly restored 18th and 19th century buildings, all across the road from some very imposing, officious-looking museums and historical public buildings. 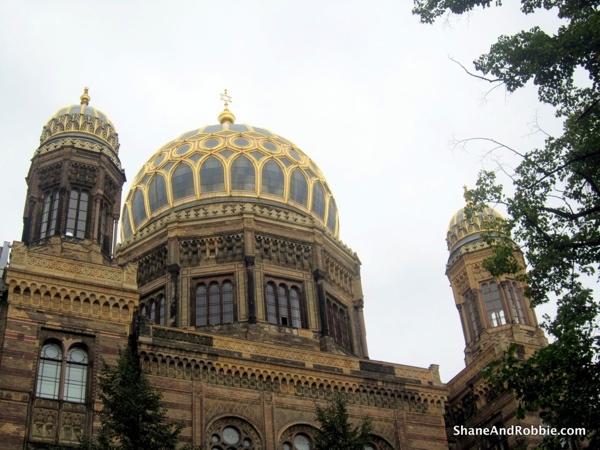 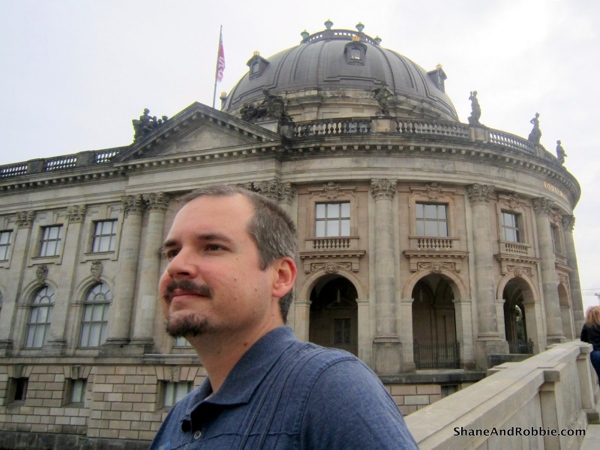 The Bodes Museum sits on Museum Island, a small island in the middle of River Spree that houses numerous museums and galleries. 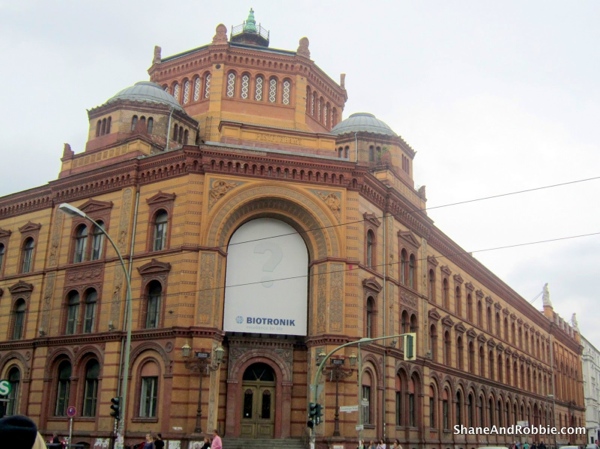 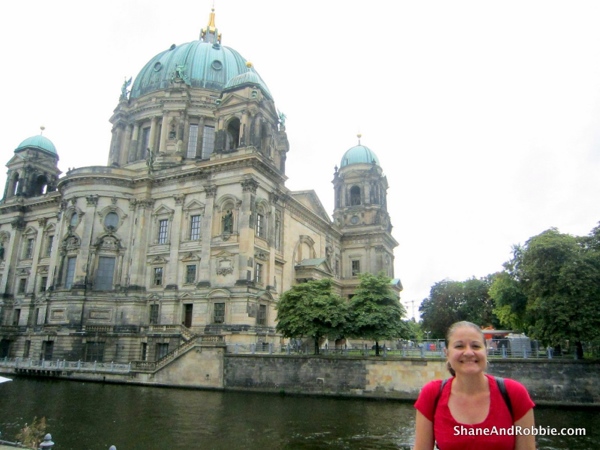 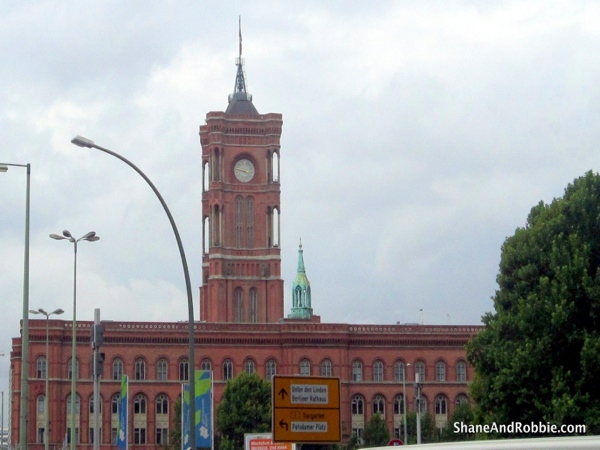 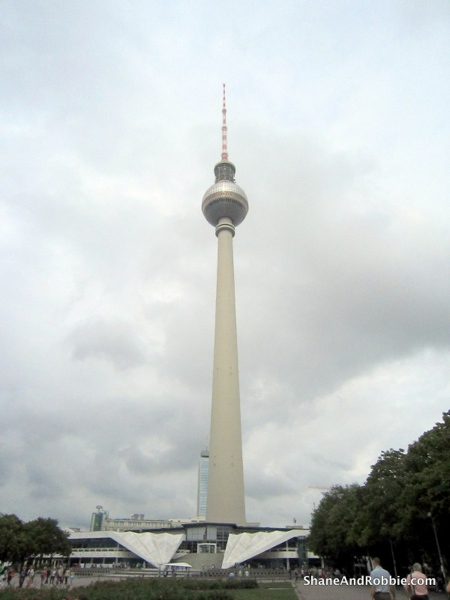 The Fernsehturm (TV tower) is 368m tall. Built in 1969, it is visible throughout most of the central districts of Berlin.

A really odd addition to Berlin’s already mixed cityscape are the dilapidated 19th and 20th century buildings, once obviously quite nice but now left to ruin. Covered in graffiti, with broken and boarded up windows, it seems a waste that these buildings have been allowed to become so run down and are not better utilised (some seem to have squatters living in them, so they are at least sort of getting used). 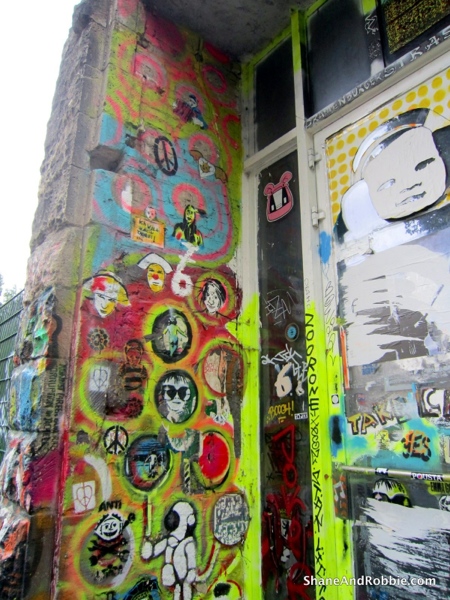 We passed a number of abandoned, graffiti-covered buildings like this one, used for little else but housing squatters. 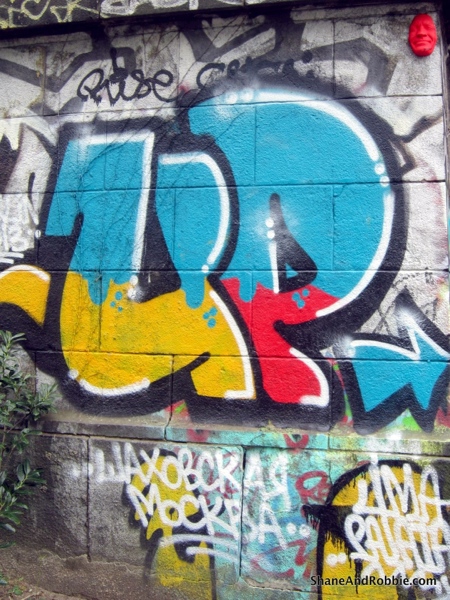 Some of the graffiti was really well done and very clever. Like the red face on this building…

Without a doubt the mix of buildings we saw on our way from our apartment* to the Berlin Wall Gallery was very interesting (*we have a little self-contained studio for the few days we’re here – it’s so nice to be able to cook for ourselves for a few days!). We’re staying in the Mitte district, which used to be part of East Berlin, and around us there are also a few Plattenbauten (translation = building whose structure is constructed of large, prefabricated concrete slabs). Built during the years of communist rule, these were designed to be residential complexes that had fixed ratios of shops, kindergartens and schools to the number of inhabitants. They definitely reminded us of Moscow (or giant toilet blocks). 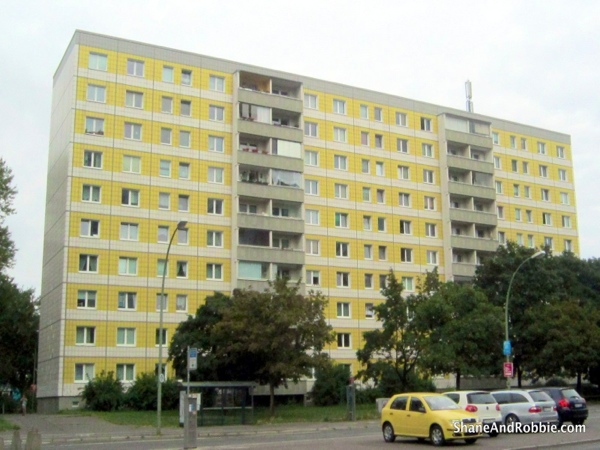 Hundreds of these Plattenbauten complexes were built in East Germany during the 1960s and 1970s.

Everywhere we walked today though we saw signs of public works going on; they’re building new tram lines, renovating old public buildings and reinventing Berlin all over again. The amount of work going on is quite astounding and I guess reflects Berlin’s current prosperity. Tomorrow we’ll venture over the River Spree into the main touristy bit of Berlin to see some of the city’s more renowned sights and see what former West Berlin is like. Gute nacht until then!