Having a Rhinely good time!

Evening blog fans! We spent most of today cruising up the River Rhine from Koblenz to Mainz, admiring the castles, villages and vineyards of the Rhine Gorge. The cruise from Koblenz to Mainz took 9 hours (despite the towns only being about 100km apart) because we were going against the current; whilst this is MUCH slower than the train, it was far more scenic and relaxing.

Since the cruises left quite late, we had heaps of time to linger over coffee and breakfast at our newly found favourite coffee shop in Koblenz. It’s right in the centre of the altstadt and looks out over the central Marktplatz. A great spot for a cafe-au-lait (or two). 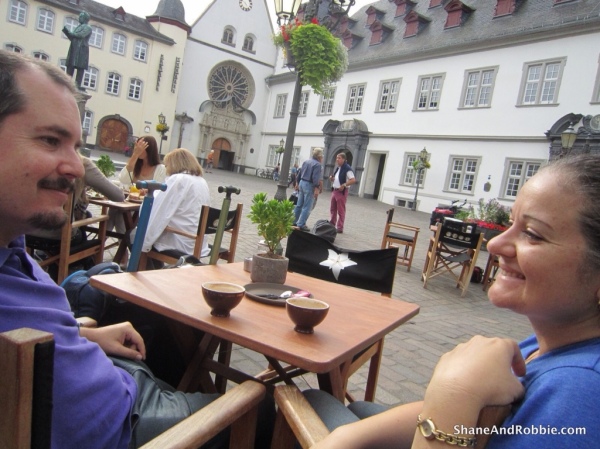 Lingering over coffee in Koblenz this morning.

At 1200km in length the Rhine is Germany’s longest river, and is one of Europe’s most important navigation and trade routes. The Rhine once marked the Northern-most limit of the Roman Empire but was taken over by Germanic tribes when the Roman Empire fell. The Rhine starts in Switzerland as meltwater from the Rheinwaldhorn Glacier. Beginning its journey as a tumultuous alpine stream, it cuts its way through deep ravines then empties into Lake Constance on the German/Austrian border before continuing on at a much more sedate pace through Germany, France and the Netherlands. Along the way the river swells with water as tributaries such as the Moselle River (confluence at Koblenz) and the Main River (confluence at Mainz) feed into it.

Cruising out of Koblenz, watching Ehrenbreitstein Fortress slowly shrink away.

Cruising past the little village of Marksburg, just outside of Koblenz.

This section of the river is believed to have been originally settled by Celtic tribes and the name Rhine comes from the Celtic word renos meaning “raging flow” – a fair description for this deep, wide river when it’s in full flood, I’m sure. The river was flowing quite sedately today though and we had a very smooth ride all the way to Mainz. 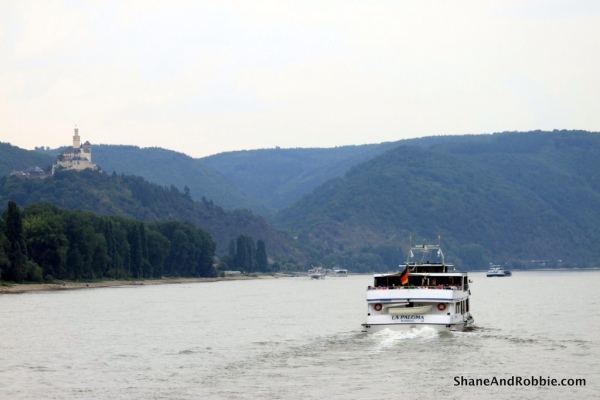 Enjoying a calm day on the river Rhine.

We weren’t the only boat cruising the river!

Our desire to cruise through this portion of the Rhine came from talking to a local guy from Koblenz that we met on the train there. He insisted we MUST cruise through the Rhine Gorge as it was beautiful and, per square kilometre, contains more castles than anywhere else in the world. How could we argue with logic like that?! And we were not disappointed; the Rhine Gorge is a picturesque ravine lined with steep cliffs, forested mountains, vineyards, medieval villages and fairytale castles.

Kamp-Borhofen, one of the cute little villages we passed during our cruise. 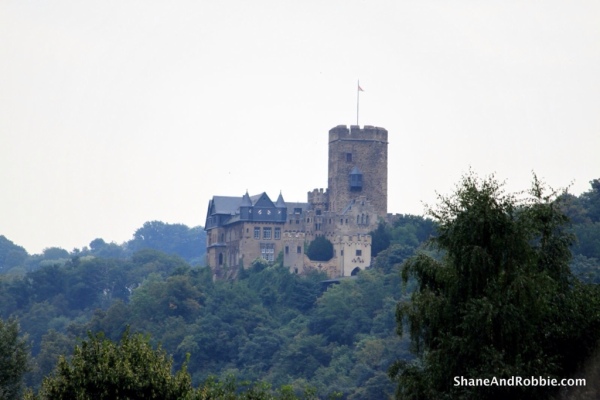 Burg Katz on the River Rhine was built in the Middle Ages and is today a luxury hotel. 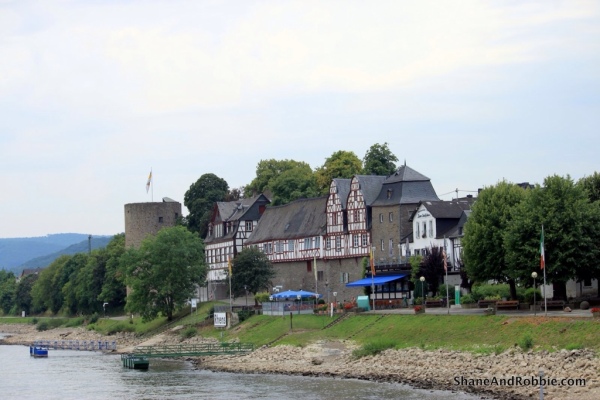 The hamlet of Rhens, where we stopped briefly to let a few people on. 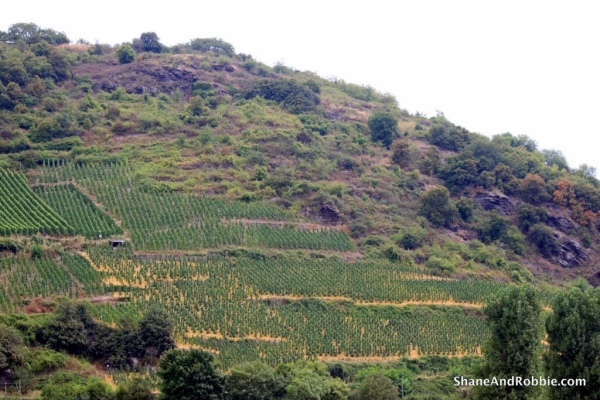 We cruised past entire mountainsides covered in vineyards, some almost 800 years old.

The village of St Goar was the half-way mark in our journey.

The village of Loreleystadt sits just below the Rock of Loreley, where, legend has it, the nymph Loreley used to sit and sign her bewitching songs, trying to drown fishermen and sailors passing far below.

Despite the clouds, the cruise was amazing. The steep walls of the Rhine Gorge towered above us, often covered in impeneratable forest and sometimes decorated with vineyards (most of Germany’s vineyards are in the Rhine Gorge). We also saw dozens of castles, some in ruins but others beautifully restored and turned int luxurious hotels or private homes. The entire 100km-long section of the Rhine Gorge between Koblenz and Mainz has in fact been listed as a UNESCO World Heritage site due to the number of castles and medieval buildings lining its cliffs. Many of these castles were built in the Middle Ages and are dark and imposing structures; it’s obvious the feudal overlords who built them designed them to be defensive structures not pretty palaces. Some of the castles, however, were constructed far more recently, in the 18th and 19th centuries; built by lords made rich from collected tolls no doubt (it was common practice apparently for landowners in the area to charge tolls to any ship wanting to pass along this important waterway). 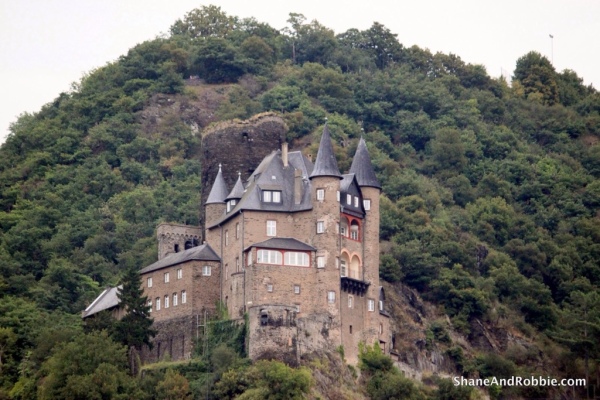 The dark and imposing Shonburg castle.

The much more modern Drachenfels Castle once belonged to the Counts of Drachenfels whose ancestor reportedly once slew a dragon – which is why they have a winged, fire spitting dragon on their coat of arms.

Drachenfels Castle in its entirety.

Much of Burg Stahleck is still in ruins, though a portion of it has been retired and is open to the public as a museum.

The beautiful Burg Rheinfels has been lovingly restored and is now a hotel. 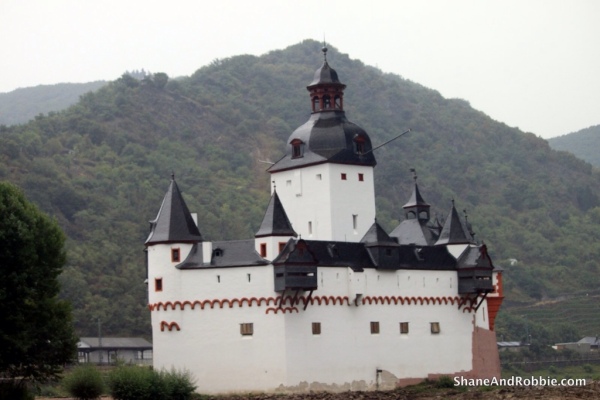 The Pfalz was built on an island in the middle of the river by the lord of this area. It was essentially a guard house and toll-collectors house. Due to the island, the navigatable channel narrows significantly here and ships would struggle to pass by unnoticed, making toll-collection a profitable business for the lord.

The front of the Pfalz is built like the bow of a ship – pointed to withstand the ongoing river currents.