Awakened by the sounds of ringing bells in Mainz, city of churches

After arriving by boat last night around 8:00pm and lugging our bags the 1.5km from the river-pier to our hotel (being a Saturday, all the taxis in Mainz were apparently too busy last night to pick us up!), we didn’t really have much time to explore our new home. We made up for that today though, spending our Sunday exploring the maze of streets in Mainz’s altstadt and wandering along the banks of the Rhine. 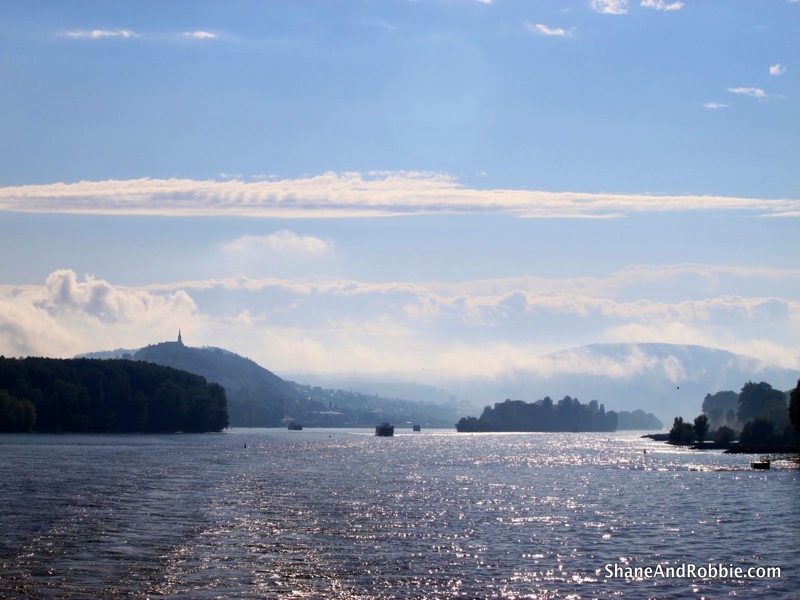 The city of Mainz, Germany.

Mainz is a relatively small town (population around 200,000) in Germany’s South-West, right in the heart of the Rhineland wine region. The city’s location at the confluence of the Rhine and the Main Rivers made it an ideal stop for traders, which is why there have been settlements here since 300,000BC. The “civilized” origins of Mainz date back to around 38BC, when the Romans built a citadel here; even today there are Roman ruins dotted around the town. Mainz is in fact recognised as an important centre for Romano-Germanic studies and in the centre of town there is the Römisch-Germanisches Museum which is home to Roman, Medieval and Bronze Age artefacts from the region.

Mainz is built at the confluence of the Rivers Rhine and Main. Here the Rhine is shallow and wide, gently flowing past numerous small islands and vineyards.

Just across the river from Mainz township there are grapevines as far as we could see.

One of the Roman ruins left in Mainz. This corner was once believed to be part of a temple.

This Jupiter’s Column stands in the centre of Mainz. Erected in 3AD it is one of the Roman ruins found in the town.  In the background you can see Mainz Cathedral, one of this town’s many churches.

We were awoken this morning by the sounds of multiple church bells ringing, coming from every direction. Turns out Mainz has A LOT of churches and they all ring their bells very enthusiastically on a Sunday morning. Due to its key geographical position in the middle of Europe, Mainz was a particularly important religious centre during the time of the Franks and The Holy Roman Empire. The Franks united the Celtic and Germanic tribes of Europe; and, under Charlemagne, built a new empire in Europe: the Holy Roman Empire. So important was Mainz during these times that the Archbishops of Mainz were considered the most important of the seven Germanic Electors and substitutes for the Pope North of the Alps. The first Archbishop in Mainz, Boniface, was killed in 754 whilst trying to convert some heathens to Christianity. He was canonised not long after his death and is the patron saint of Germany.

St Ignatius, one of Mainz’s many churches.

The statue of St Boniface in Mainz stands in front of the the town’s main cathedral, St Martin. This massive church was first built in 975 and added to in the 13th and 14th centuries. It was one of the few buildings that survived the air raids of WWII intact and today sits at the heart of modern Mainz (the square in front of the cathedral is still Mainz’s main town square). 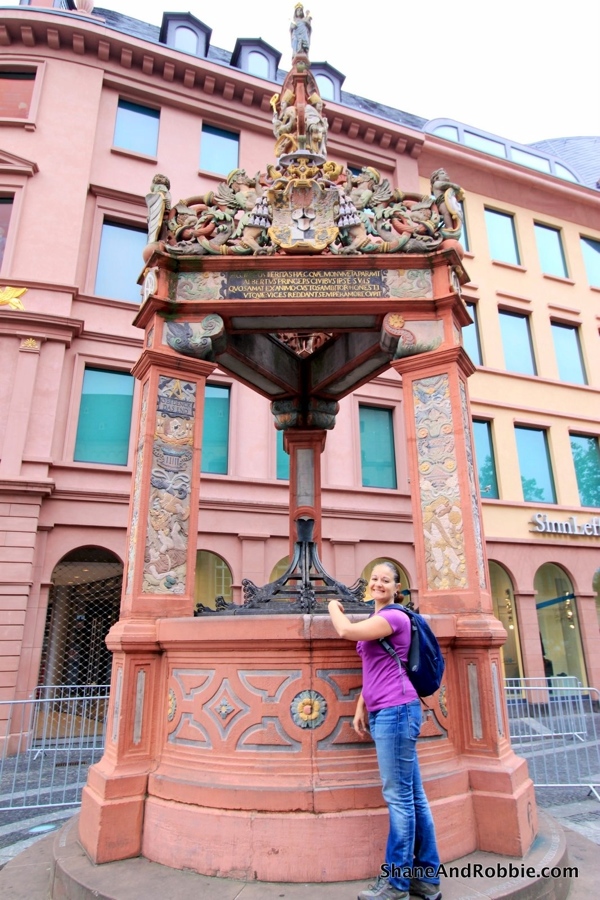 In front of the cathedral, in the main square, you can still see the original town well.

A small number of fachwerkhäuser (traditional German Medieval houses) also survived destruction during WWII, much to our delight. Their steeply pitched roofs, window flower-boxes and timber frames are just to cute and we couldn’t help but photograph them as we wandered through the cobbled streets of Old Mainz. 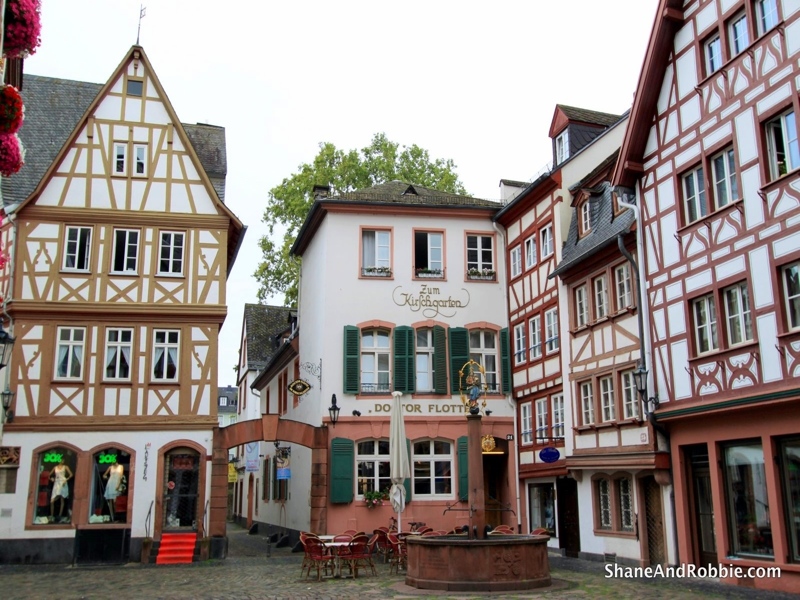 These fachwerkhäuser date from the 15th century. 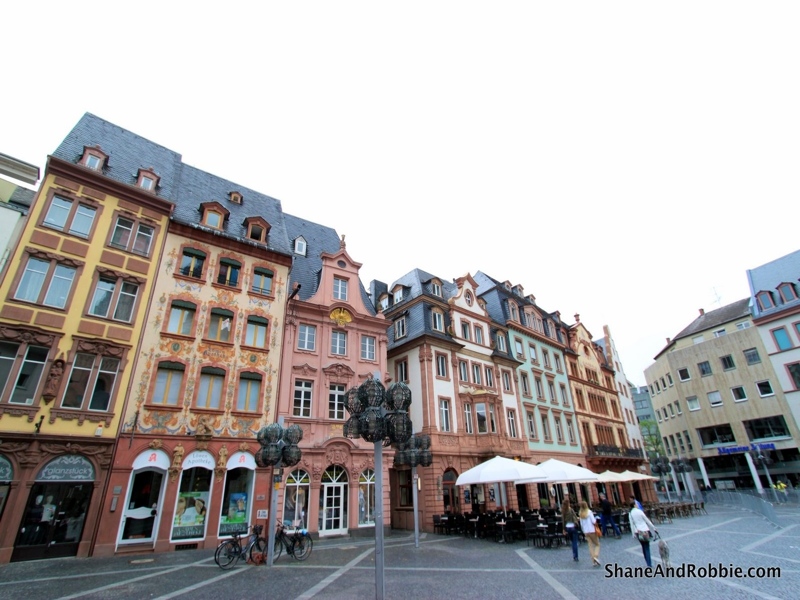 As we strolled through Mainz’s altstadt we also came across the reconstructed Electoral Palace, built in the 18th century as the residence of the Elector of Main; and the 17th century Domus Universitatis, once Mainz’s tallest edifice and still part of its university. These buildings stand around Schillerplatz, one of  the main squares in town. In the centre of this square is the Fastnachtsbrunnen (translation = carnival fountain), a fanciful piece made of many figures together, all celebrating Midsummer’s Festival together. 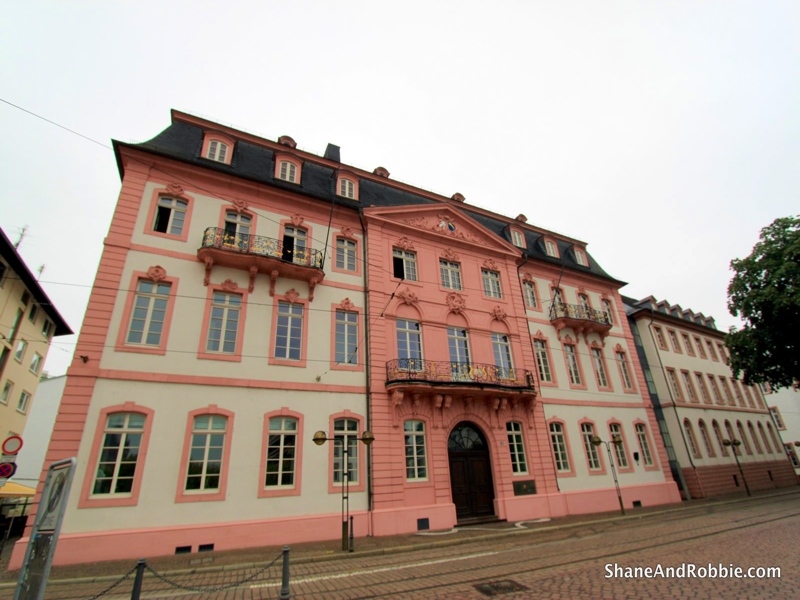 The 18th century Elector’s Palace in Mainz, rebuilt in the 1970s after being destroyed in WWII.

Finally, during our wanderings we came across the Gutenberg Museum. Named after Mainz’s most famous son, Johann Gutenberg (the European inventor of printing press* in 1450), this museum is dedicated to all things printing and publishing-related. It contains 2 copies of the Gutenberg Bible (the first book ever printed using a printing press) and numerous other rare and precious books printed on one of those early printing presses. Ah the power of the written (typed) word… With the advent of television, the internet and mass media, we barely think about the value of information any more these days – we just expect to be able to access all information, from anywhere, at any time. At least in the developed world, we take being able to read for granted and assume we have a right to gather information and make up our own minds about “the facts”. This was not always the case, and the invention of the printing press represents one of the leaps forward in human evolution, I think, because it facilitated the easy dissemination of knowledge. And you know how it goes: with knowledge comes power. Who knew that one of the tools that enabled us to become so very “powerful” today was invented right here in Mainz?! WE didn’t (until today)! A great discovery to end a great day of exploring in Mainz!

(*They had printing presses in China and Korea in the 11th century, Europe just took a little longer to catch up.)