DAY 106: ABOVE THE SNOW LINE IN INNSBRUCK

We wanted to hike (some of the way) up Mt Hafelekar today, so when the day dawned cool and cloudy we were very pleased. It wasn’t the gloriously sunny day we had hoped for, but at least it wasn’t raining, sleeting or snowing!

Hiking above the snow line in Innsbruck, Austria.

Mt Hafelekar is 2,334m high and easily accessible from down-town Innsbruck via train then cable car. In winter the whole mountainside is a snow-clad wonderland, popular with skiers and snow boarders. In summer it’s a green hiker’s paradise. In autumn it’s…., well…., stuck somewhere in the middle – that is, it was still green up on the mountain, but there was also snow on the ground up above 1,800m. It made for slushy going as we got higher up the mountain, as the thermometer crept up to 3C and the snow and ice melted.

The melting snow and ice made for some slushy going.

Not that we hiked the whole way up the mountain, just up to the Seegrube cable car station (1,905m up). Why stop so close to the end goal you ask? Well, let’s just say that when the brochures in Austria say “…this hike is only recommended if you are sure-footed and do not suffer vertigo“, they are NOT kidding. The last bit of the hike, from Seegrube to the top of Mt Hafelekar was mountain goat territory. And we may be many things, but hircine we are not. So we stuck to the lower reaches of the mountain, where cloven hooves are an optional extra.

We stuck to the wide, sweeping bends of the lower mountain trail. The last part of the trail was way too precipitous and scary – mountain goats we are not!

We started out nice and early, keen to make the most of the dry weather while it lasted. The first part of the hike, from Innsbruck to the village of Hungerburg, was very civilised. We gradually ascended from 560m to 860m over about 1.5kms, through manicured parklands and tamed forest. Easy!

Most of the first part of the hike was through parkland, where the first blush of autumn was in evidence. 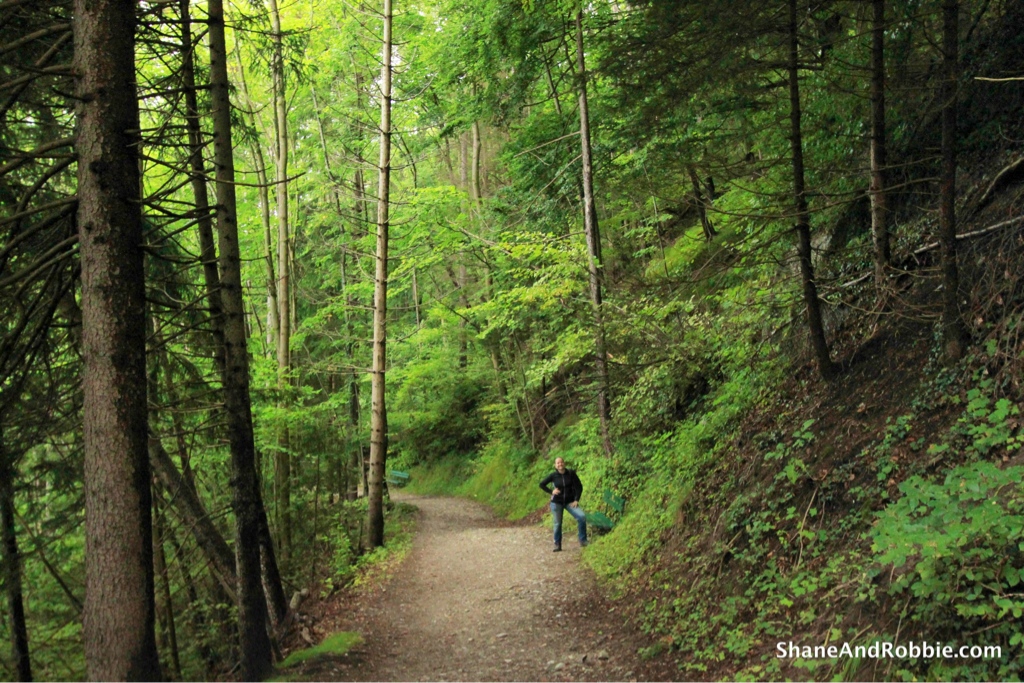 The first part of the hike, from Innsbruck to Hungerburg, was easy! 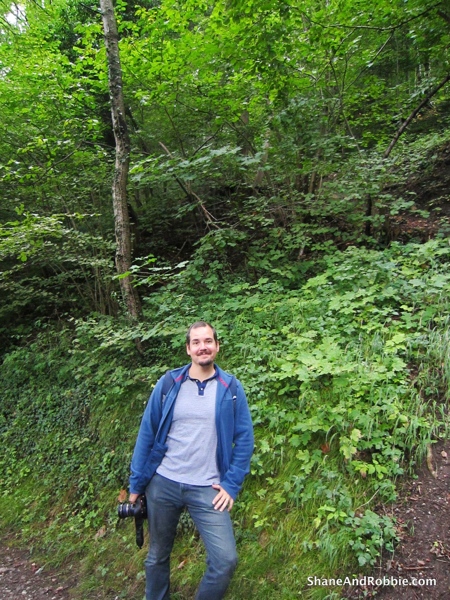 The man behind the camera.

Upon reaching Hungerburg we briefly checked out the view, waved to the folks hopping on the cable car, and began our trudge through the forest up to Seegrube. This part of the hike was steeper than we had expected and it got seriously COLD – the further up we went, the colder it got. Good thing we wore our thermal underwear* coz we are NOT used to these kind of temperatures!

*I’m sure those of you from cold climes think it’s hilarious that we’ve got thermal underwear on IN AUTUMN, but you have to understand, Australia is generally HOT. Very hot and very flat. This whole cold/mountain thing is rather alien to us (hence the fascination with hiking up mountains, catching trains up mountains, riding cable cars up mountains), and we’ve yet to acclimatise to these icy temperatures. 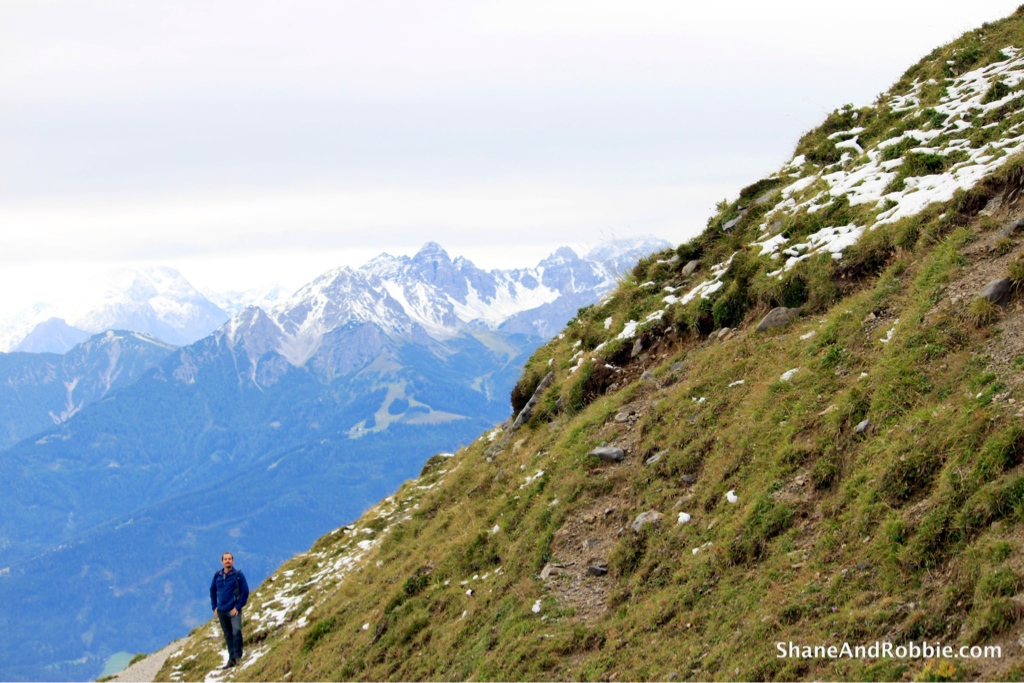 The hike from Hungerburg to Seegrube was steeper and more challenging than the first section.

The further up we went, the colder it got (and the more spectacular the views back down to Innsbruck got too).

Each time we rounded a bend the view got better. 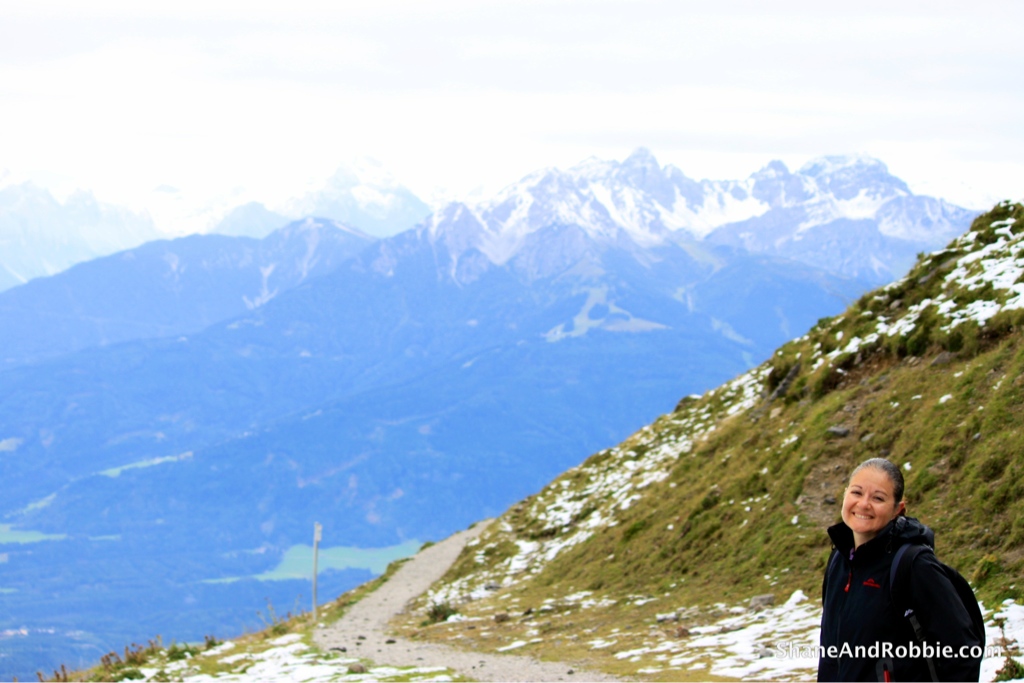 The views back down the valley to Innsbruck and across to the other mountains was breathtaking. There was a small bank of clouds down around 1,200m that lit up at one point when the sun came out in full force (for about a minute) – it was spectacular! 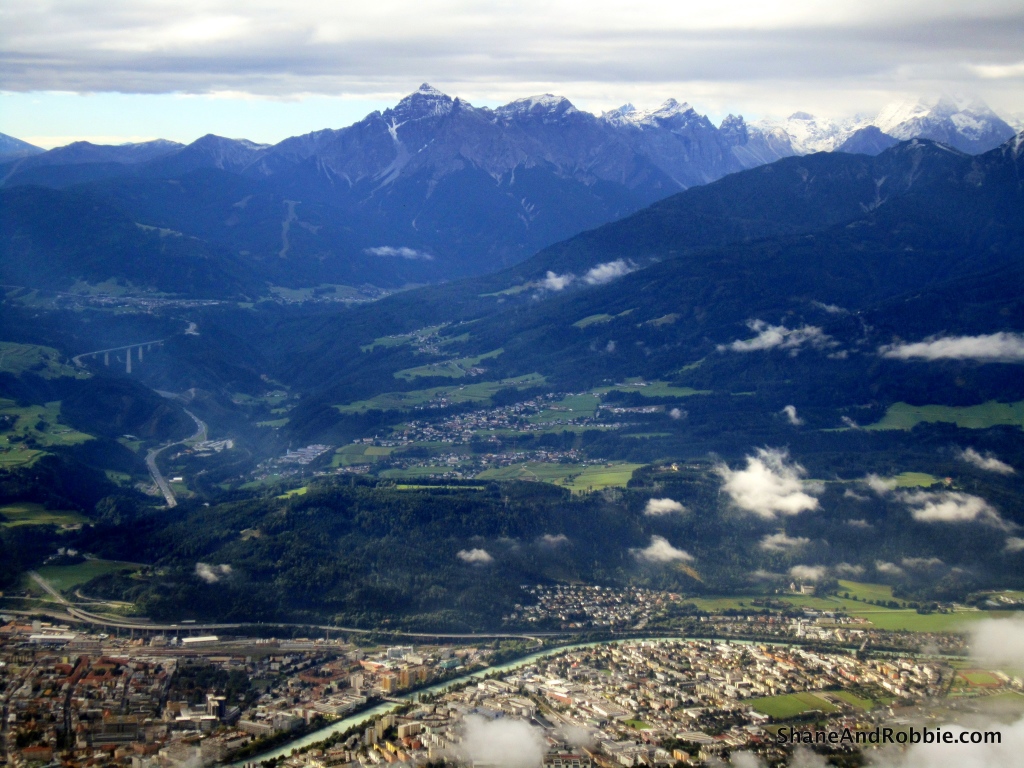 Awesome views back down the valley and across to the other mountains on the other side. 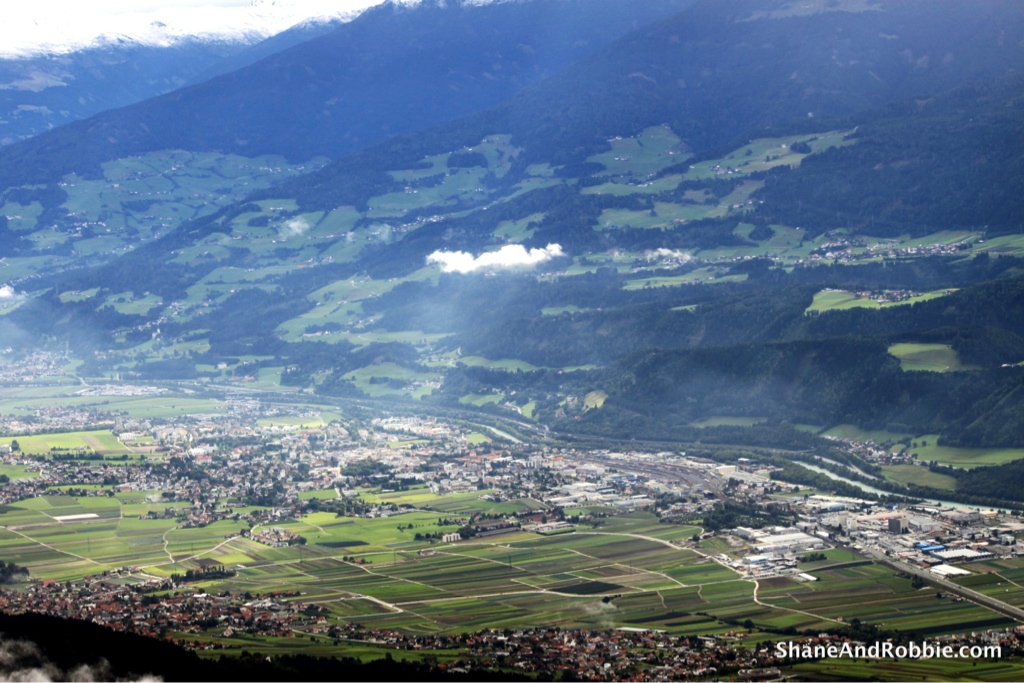 Watching the sun light up the valley below.

Shane admires the views back down the valley. 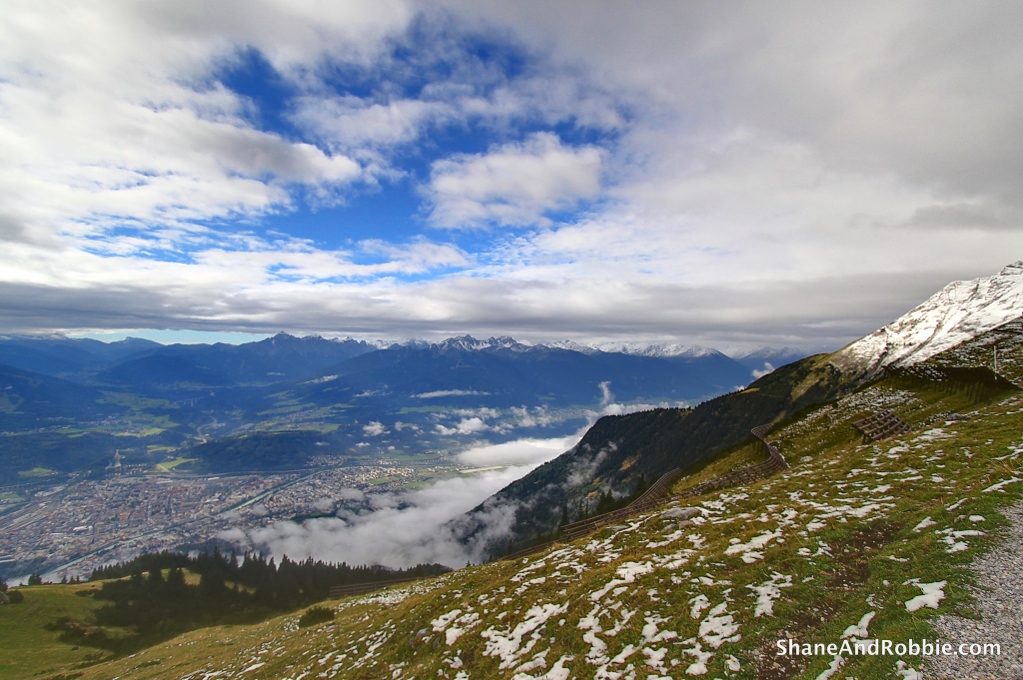 This is WHY Shane was stopping to admire the view. 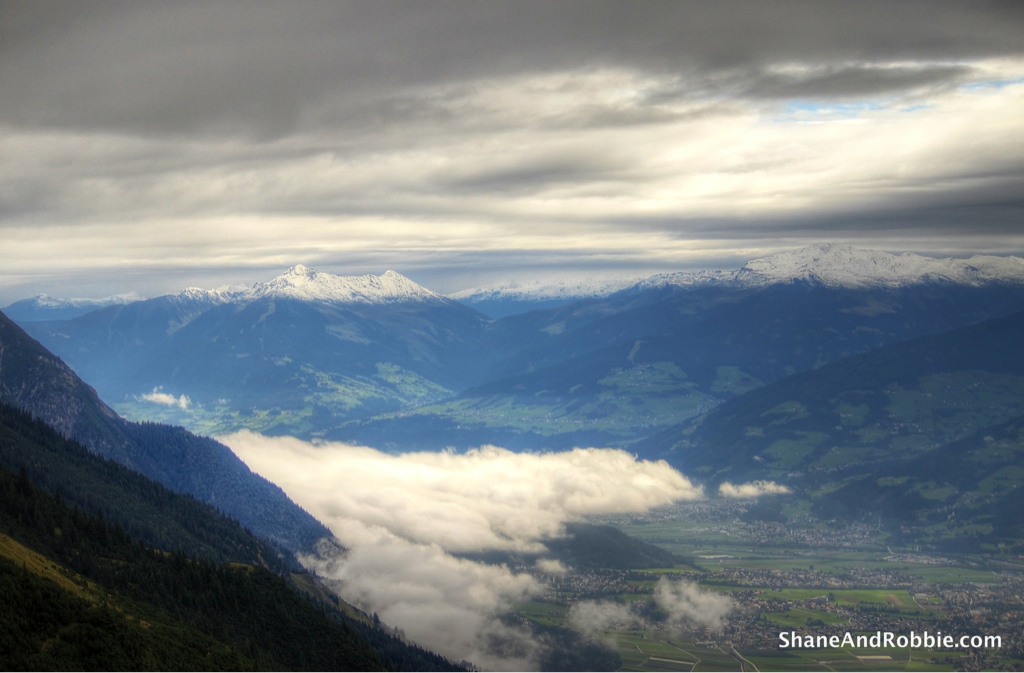 Ah yes, THIS is why we climb mountains – for moments like this!

By the time we reached Seegrube (8kms and 3.5 hours later), however, I was so freaking cold that I barely cared about the view (Shane seems immune to the cold – not sure why this is, but I think some connection between his outer bits and his brain might be broken). Luckily they have a restaurant up there that serves schnitzel and I was quickly revived. Shane meanwhile enjoyed a beer and some of the best beef stew either of us have ever tasted.

Now so freaking cold I don’t care about the view. Need schnitzel – STAT!

We had a look around outside after lunch and considered going the rest of the way to the top of Mt Hafelekar by cable car from Seegrube, but by then the clouds had closed in and it was starting to sleet. So we decided to take our full bellies back down the mountain the easy way (i.e. cable car from Seegrube to Hungerburg, then funicular train from Hungerburg to Innsbruck).

Seegrube – our lunch stop. Needless to say we did not dine al fresco. 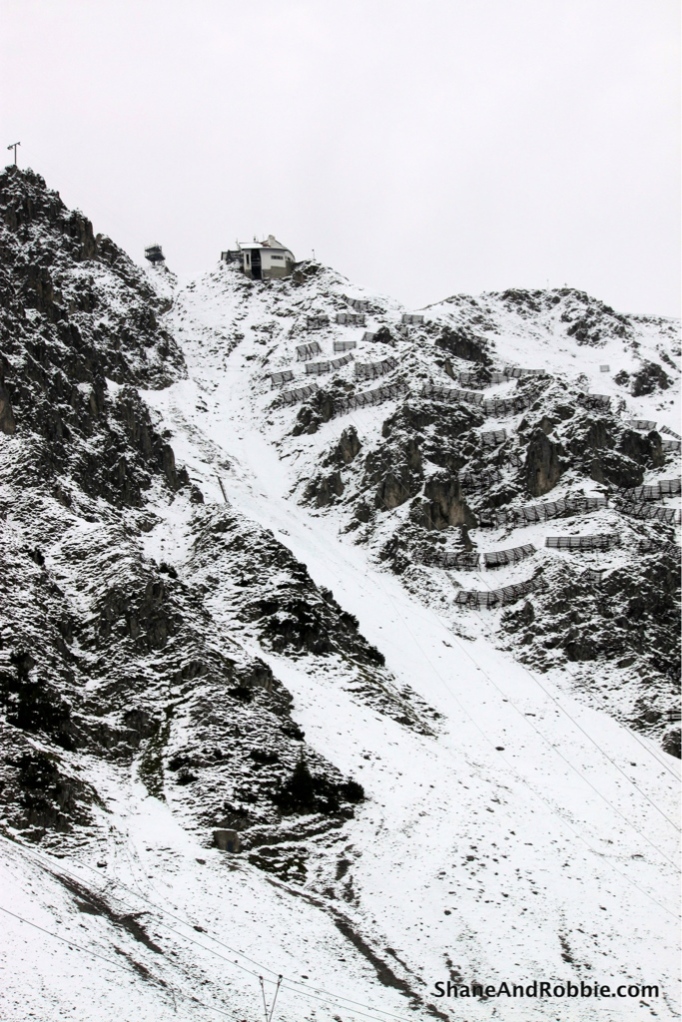 The top of the mountain, as seen from Seegrube at about 2:00pm this afternoon. We contemplated catching the cable car to the top but, given the white-out conditions, thought better of it.

Upon returning to down-town Innsbruck I convinced Shane that we needed to go shopping (yay – his favourite!) for some more cold weather clothing. If today’s temperatures are anything to go by, we will definitely need some more thermal underwear and maybe an extra jumper or 2. There are quite a few “adventure sports” shops here so we found what we wanted easily, much to my delight. I shall fear the cold no more! 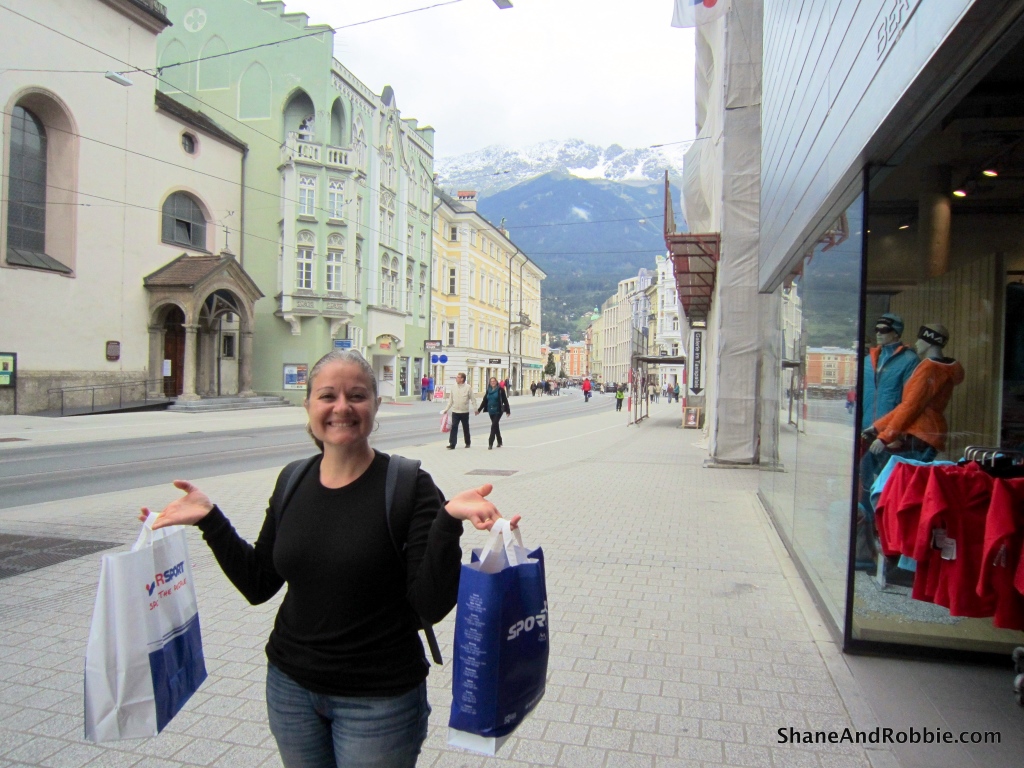 I shall fear the cold no more!

We’re now back in our hotel room, staring up at the mountain we hiked up today contemplating what adventures to seek out tomorrow. There are quite a few museums in and around Innsbruck we have not seen, but then there’s also a dozen or so mountains we could hike up too…. So many choices! Join us tomorrow to see how we chose to fill our Sunday.

Another great day! What adventures will tomorrow bring??