For those of you that may not be familiar with speck, allow us to introduce you. 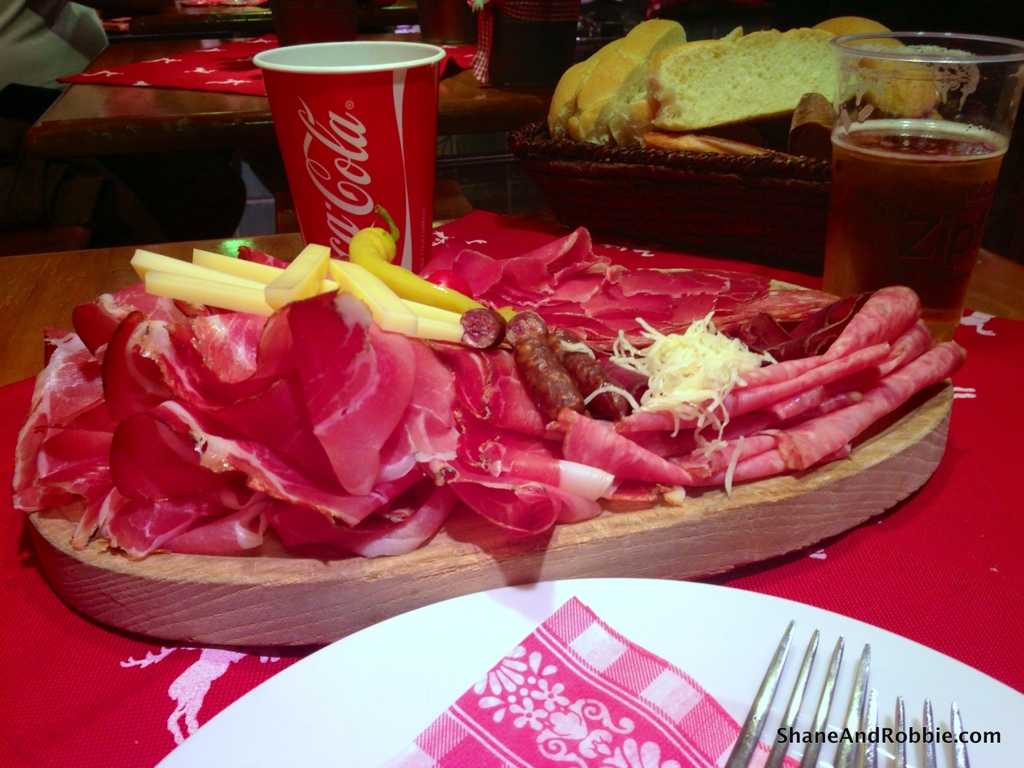 Speck is essentially a type of cured, smoked ham. It is delicious. It is also a Tyrolean speciality and, since we are such committed travellers (and foodies), we decided it was our obligation to sample some Tyrolean speck* today. We found a tiny shop in the altstadt last night called, appropriately enough, Das Speckeria. It was wall-to-wall speck, salami and prosciutto…mmmmm, so much tasty meat. We partook in a “Sampler Platter for 2” and it was AWESOME! The deer and wild boar speck were particularly tasty.

*Tyrolean speck is made from cold smoked meat (most commonly pork), cured with salt and a mixture of garlic, bay leaves, nutmeg and juniper berries. The curing and smoking process takes 5-6 months and produces the distinctive flavour and melt-in-your-mouth texture that Tyrolean speck is known for. It’s traditionally served wafer-thin with grated horseradish, pickles, fresh chilli and dark rye bread. 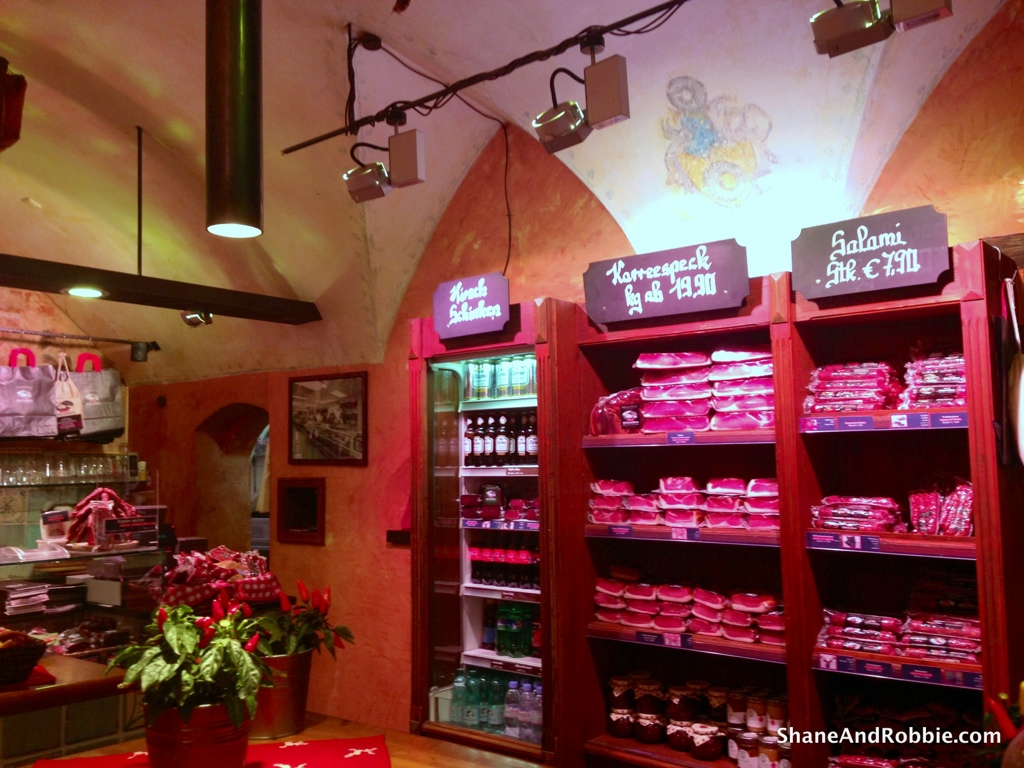 Wall-to-wall speck. So much tasty meat….

So that’s how our day ended – in a speck-tacular feast; a feast we earned by hiking the Zirbenweg Trail. The 7km Zirbenweg Trail (translation = Stone Pine Trail) winds its way through the largest pine forest in the Alps, up at 2,000m. The trail itself is quite flat and a relatively easy hike as it runs across the ridge that links Mt Patscherkofel and Mt Glunegezer (see map below). After yesterday’s fairly intense uphill walk, the thought of a more sedate stroll across the mountains (rather than upa mountain), was very appealing. The trail is part of a circuit that you can do, starting from the tiny village of Igls, some 10km out of Innsbruck (easily reached by bus). The circuit involves:

The entire circuit is covered by the one ticket (a steal at 20Euros per person) and made for a great day of hiking and gaping at the scenery. The views all along the Zirbenweg Trail were pretty spectacular with the Inntal Valley unfurled at our feet, and Mt Hafelekar and the other peaks visible across the other side of the valley. Mt Patscherkofel is essentially directly opposite where we were yesterday and it was great seeing the whole spread below us, just from the other side.

Amazing views from the Zirbenweg Trail, across the Inntal Valley and across to the mountains on the other side.

Just stopping to admire the view for a moment.

We stopped to admire the view so often it took us an hour longer to complete the hike than it should have!

Our morning started with a short bus ride to Igls and then a 20 minute cable car ride up Mt Patscherkofel. The cable car was packed with families and solo hikers setting out to do the Zirbenweg Trail, just as we were. There were even a couple of dogs in the cable car; people in Europe seem to take their pets everywhere, even up mountains – it’s great! We noticed that everyone seemed to have a lot more layers on than we did, and when we emerged from the cable car, up at 1,952m, we understood why. It was pretty cold up there, with a chilly wind that had us pulling on extra layers pretty quick smart! It was no where near as cold today as it has been though; in fact, it warmed up so much overnight that all the snow melted!

It had warmed up so much overnight that there was no snow left. It made for some pretty slushy hiking at times.

We let the other hikers go on ahead of us, leaving us with just the mountains and trees for company.

The view from the top of Mt Patscherkofel was pretty awesome so we lingered there to take a few photos, letting everyone else get ahead of us on the trail (kids and dogs are cool, but they are also pretty noisy and we wanted a bit of serenity and space on our trek).

The view from the top of Mt Patscherkofel was pretty awesome.

The Zirbenweg Trail takes you through the largest alpine pine forest in Europe. Some of the trees are hundreds of years old, like this one.

The Zirbenweg Trail was well marked with signs and is supposed to take just 2.5 hours; with all the photo stops we took, however, we were up there for an extra hour! We basically had the mountainside to our left and the Inntal Valley opening up below us on our right the whole way. It was a feast of colours, with the green of the valley below, the blu(ish) skies above (not as blue as it could have been as it was pretty cloudy for most of the day); and the yellow, orange and red of autumn all around us. 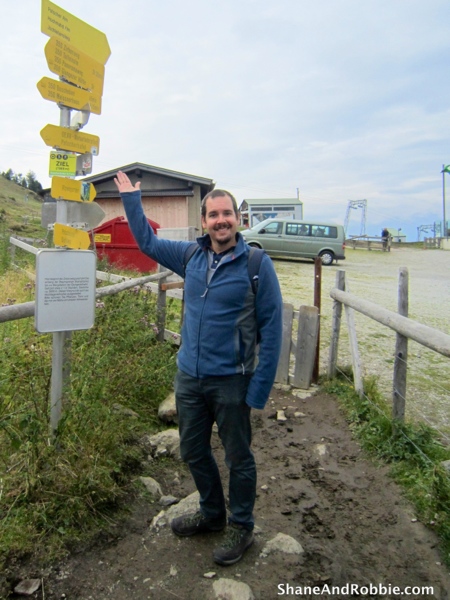 A visual feast, with the green forest, bluish skies and colours of autumn around us.

About two thirds of the way along the trail we stopped for a picnic lunch, enjoying the silence and the fresh mountain air while we ate our sandwiches and contemplated the awesomeness of nature. Funnily enough neither of us miss work or the obligations that come with having a house – moments like these more than satisfy us.

Picnic lunch for 2 with a view please.

At one point along the trail we rounded a corner to see a tiny chapel come into view. The urge human beings have to build places of worship in epic natural locations makes perfect sense – we’ve seen it everywhere we’ve been, from Japan to Russia, in Iceland and now here. Anywhere this epic tends to make you feel very small and certainly makes you appreciate things greater than yourself.

The chapel in the mountains. 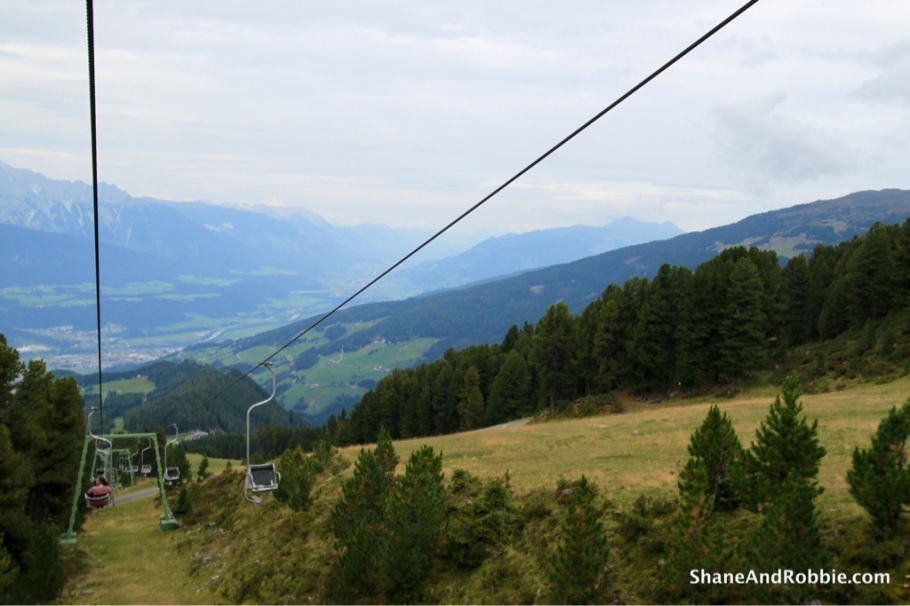 Sweet, sweet silence on the way down the chair lift.

The tiny village of Tufles, the end of our chair lift ride.

The chair lift deposited us safe and sound in Tufles, a tiny village that comes alive in winter no doubt, but in autumn is so quiet all we could hear were cows lowing! The bus from Tufles back to Igls took about half an hour and took us past farms and fields of corn and wheat. Then, from Igls it was just another short bus ride back to Innsbruck where a hot shower quickly revived us, preparing us for our speck-tacular speck feast at Das Speckeria. Another wonderful day wandering through Austria… 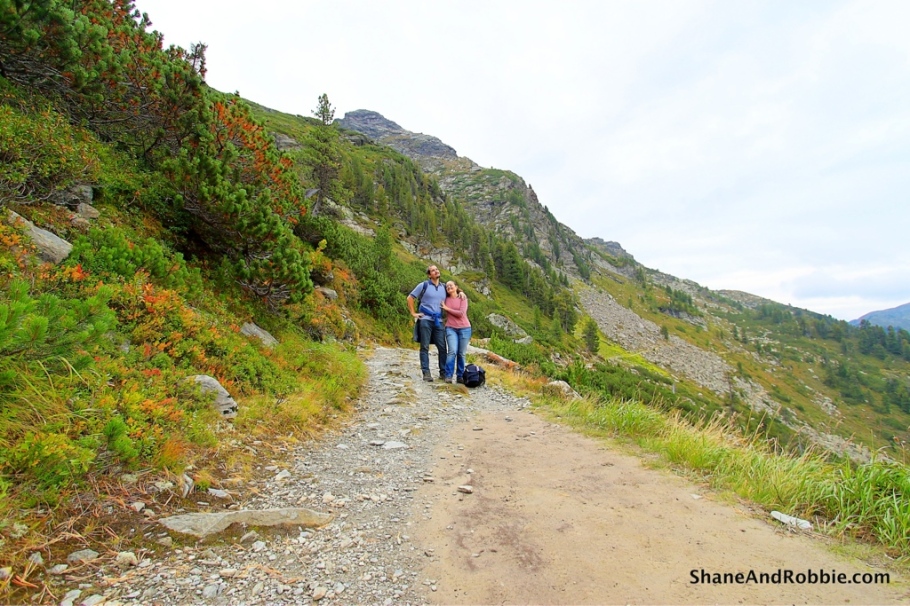