What a summer schloss!

As with most European royal families, the Haspburgs of Austria had a summer palace as well as winter one. We saw their winter palace (Hofburg) on Friday and, seeing as it was warm and sunny, we thought we would take the opportunity today to see their summer palace: Schloss Schönbrunn. And wow, what a palace it was!

Schönbrunn Palace is a 1,440-room Baroque and Rococo palace just 20 minutes outside of Vienna’s city centre. The palace and its gardens were listed as a UNESCO World Heritage Site in 1996 in recognition of its beauty and unique cultural importance. Today it is one of Vienna’s most visited tourist attractions, with 3 million people walking through its immense gates every year. In a city that boasts 400 museums and dozens of palaces, Schönbrunnoften gets voted as the best sight in Vienna. High accolades indeed! We joined the throngs of tourists today, keen to see what all the fuss was about.

Oooooh, so THIS is what all the fuss is about!

We were not disappointed; the palace and its formal gardens are spectacular. The palace itself is by far the most opulent we’ve seen since The Hermitage in St Petersburg (Russia). It makes sense that the Haspburgs would have estates, palaces, art collections and riches at least equivalent to the Romanovs of Russia as both dynasties controlled vast territories and collected taxes and tithes from millions of subjects. Unfortunately we could not take photos inside the palace itself, but the following “official” photos give you an insight into the beuaty of the 40 rooms at Schönbrunn Palace that have been fully restored and are open to the public.

The main formal dining room. Perfect for intimate dinners for 140 or so of your closest friends. (Photo care of http://www.schonbrunn.at)

One of the imperial family’s private rooms, where they would play cards and relax in the evenings. (Photo care of http://www.schonbrunn.at) 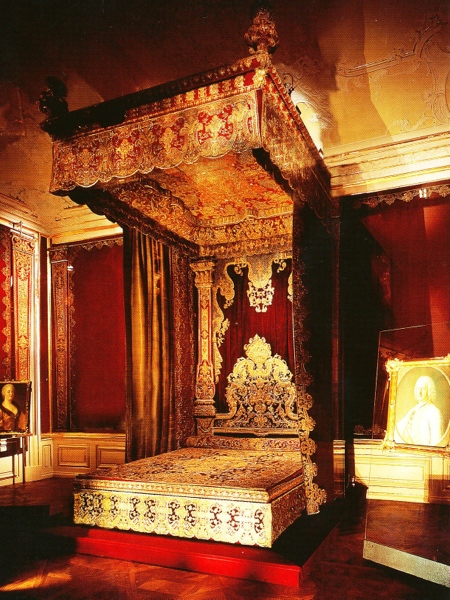 The imperial bedchamber. I would find it a bit to hard to sleep in amongst all that finery I think. (Photo care of http://www.schonbrunn.at)

The name Schönbrunn means “beautiful spring”, and the palace and its ground smust indeed be beautiful in spring. They’re not bad in autumn either, with a few flowers stillin bloom and the trees starting to turn orange, red and yellow. The central boulevard, which leads from the main palace to a large fountain of Neptune, is especially impressive.

Love this view! Sorry, let us get our fat heads out of the way so you can see it too…

The main boulevard leads from the main palace…

To the immense fountain of Neptune at the bottom of the garden.

The view back towards the palace from behind the fountain. 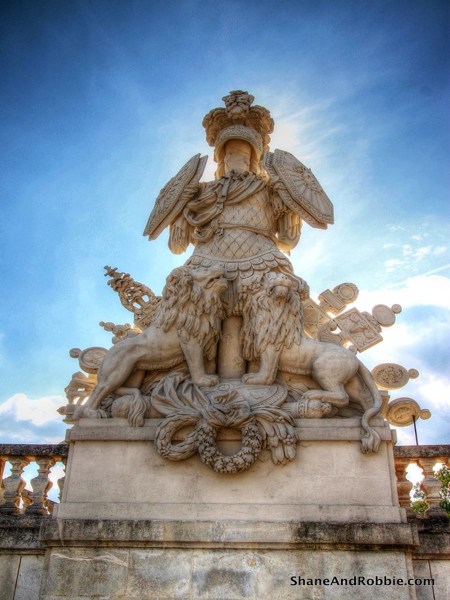 The central boulevard was lined with amazing statues, like this one.

The palace was originally built in 1569, under orders of Holy Roman Emperor Maximilian II. The grounds around the early summer palace was fenced and filled with game (e.g. pheasants, ducks, deer and boar), in order to serve as the court’s recreational hunting ground. Each successive Haspburg generation extended the palace and gardens; additions added to the palace over its 250 year history as an imperial summer residence include a palmery, an orangery, a zoo (yes, they had a private zoo), a maze, formal French-style gardens, English-style gardens, and a herbal garden.  We spent virtually all day exploring Schönbrunn Palace and its gardens and we did not get time to explore all of its 435 acres. What we did see was beautiful though. It was especially nice to see so many people using the gardens to relax in – the gardens are freely open to the public as a park. 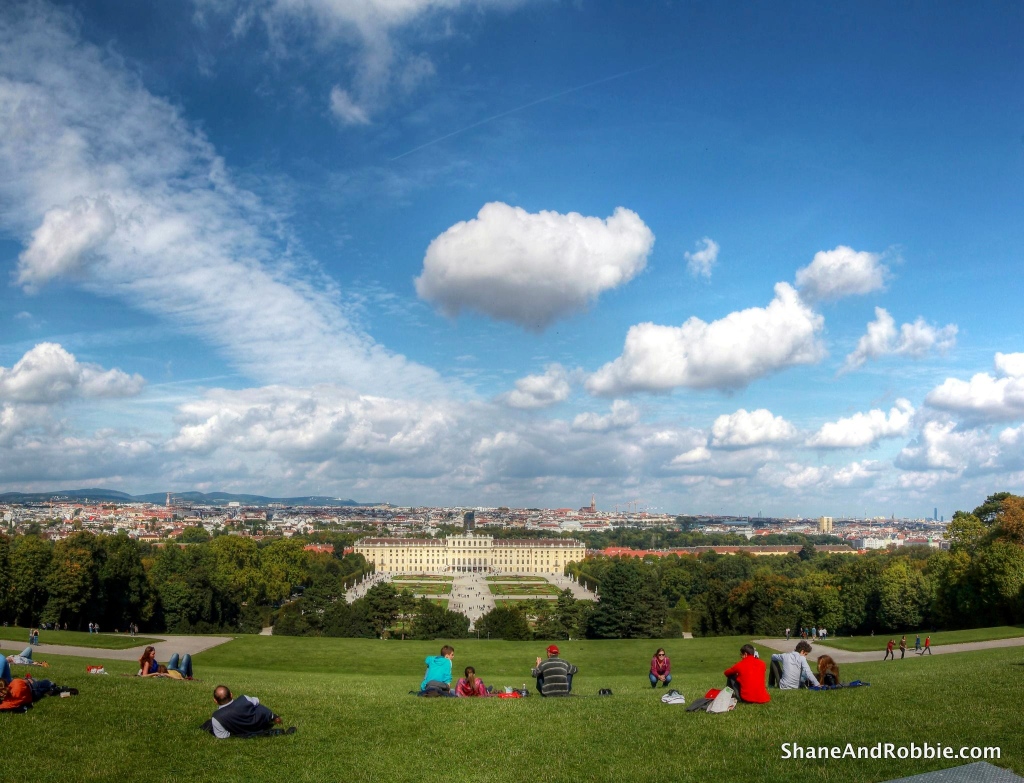 There were lots of people just chilling out, enjoying a relaxing Sunday at the park. It just happens to be a park with one of the best views in Vienna! 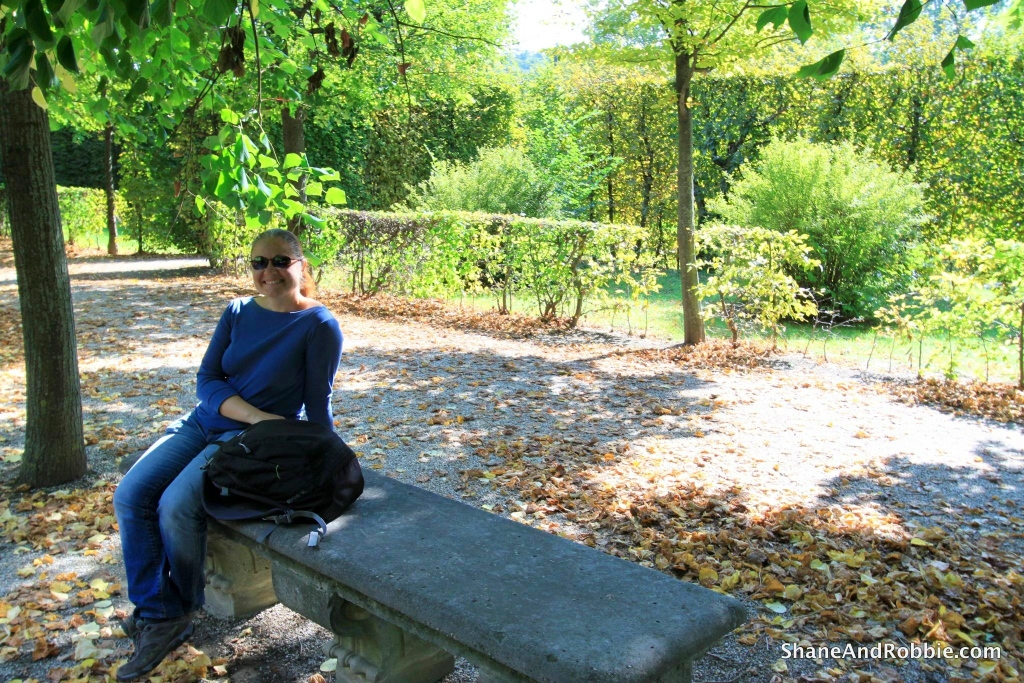 We also spent some time chilling out in the park.

These massive hedges are almost 200 years old – they were planted in the 1800s to form a maze.

The garden axis points towards a 60m high hill which has, since 1775, been crowned by a large pavillion called The Gloriette. This structure was commissioned by Empress Maria Theresa to glorify the Haspburg’s victories in war. The Gloriette today houses a café and provides expansive views over the city of Vienna.

The view from The Gloriette back down to the palace and across all of Vienna. 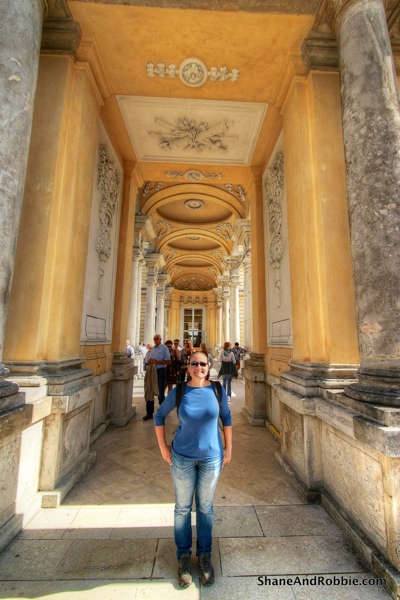 The intricately sculpted interior of The Gloriette.

Empress Maria Theresa features strongly throughout the tour through Schönbrunn Palace and its gardens as she commissioned a number of additions and renovations that remain today. By all accounats she was a strong-willed, domineering woman, who fought off all attempts to force her to take a background role in the ruling of the Holy Roman Empire and let her husband rule instead. She claimed the title of Empress for herself as her birthright and ruled as the only female leader of the Holy Roman Empire for 43 years. It’s interesting to see how women who rose to power in times when females were generally not allowed to occupy such roles (e.g. Queen Elizabeth of England, Catherine the Great of Russia, Empress Maria Theresa of Austria), are uniformly remembered as being incredibly strong willed and forceful in character. I guess that’s the only way they could have succeeded in those roles.

Empress Maria Theresa and her husband, Francis I, had 16 children (11 daughters and 5 sons), 13 of whom survived childhood. Following in the Haspburg tradition of avoiding war (unless “absolutely necessary”) and gathering power and influence by forging alliances via strategic marriages, Maria Theresa used her children to further the Haspburg influence. For example, her children include Queen Marie Antoinette of France, Queen Maria Carolina of Naples and Duchess Maria Amalia of Parma. It’s not that different to modern corporate tactics of mergers and “friendly take-overs” really – it’s all about power and money really isn’t it?! Certanly, in the case of the Haspburgs, they were incredibly successful at gathering power and wealth, with the remanants of their empire still awing us today, even a 100 years after it ceased to exist.

Schönbrunn Palace was a great place to learn all about Empress Maria Theresa and to see a bit more of what remains of the Haspburg empire. Today was our last day in Austria though – tomorrow we move on to Bratislava, the capital of Slovakia, with our tour group. We have no idea what to expect from Slovakai though, so should be interesting! And the people in our tour group seem pretty cool – there are 5 Kiwis (i.e. New Zealanders) and 7 Aussies (not surprising as Intrepid is an Aussie company). The age range is about 25 to 65, and from the brief chats we’ve been able to have with everyone, they all seem nice. Easy company for the next 2 weeks anyway, which is the main thing! Our tour guide is lovely – she’s Polish and speaks perfect English and German, as well as a smattering of Slovakian and Czech. She’s also very organised and runs a tight ship which is awesome – makes it easy for us to relax when we know she has everything under control.

There’s 12 of us of this tour, which I think is a good size – not so big as to be intimidating, but not so small that it becomes almost “intimate” or uncomfortable. Group size is actually one of the reasons we chose to do an Intrepid tour – their maximum group size is 12! We also like their approach to touring – i.e. catch local transport as much as posisble, mix and mingle with the locals as much as possible, travel responsibly, support local businesses and industry where ever you go, have lots of free time to do your own thing (which also helps keep tour prices reasonable), and Intrepid also tend to include lots of hikes and physical activity into their intineraries where possible, which we love! We just HATE the idea of being stuck on a coach with 60 other people, being shuttled from one sight to another with no chance to really experience a place. A lovely German lady we met hiking around Innsbruck said something which I think summarises our approach to travel perfectly; she said: “If you haven’t walked it, you haven’t been!”. Exactly our thoughts! This Intrepid tour itinerary seems to be perfectly designed to help us “walk it”, and therefore really experience it. Stay tuned over the next 2 weeks to see how the tour goes…