DAY 115: JUST ONE DAY IN BRATISLAVA

That is: welcome to Slovakia! The Eastern European leg of our adventure has well and truly begun with today being our first day in Bratislava, the capital of Slovakia.

We caught the local train with our tour group this morning out of Vienna. Bratislava is only 65km away from Vienna but it is a world away from the structured, regimented Germanic lands we have been travelling through for the past 6-7 weeks. As soon as we crossed the border from Austria to Slovakia the view was noticeably different. Not in terms of the landscape (we’re still surrounded by the wide plains of Central Europe here), but more in terms of the state of the buildings and the roads. Everything here in Bratislava is just a little more “rough around the edges” – i.e. roads have big potholes in them, many buildings are dirty and in disrepair, and virtually every building has graffiti on it (and not the cool street art kind of graffiti we’ve seen in places like Berlin and Vienna, just crappy tags and swear words). The main touristy part of Bratislava is pristine, but you just have to go one street back and the cityscape are much more like what we expected from a former Communist state. 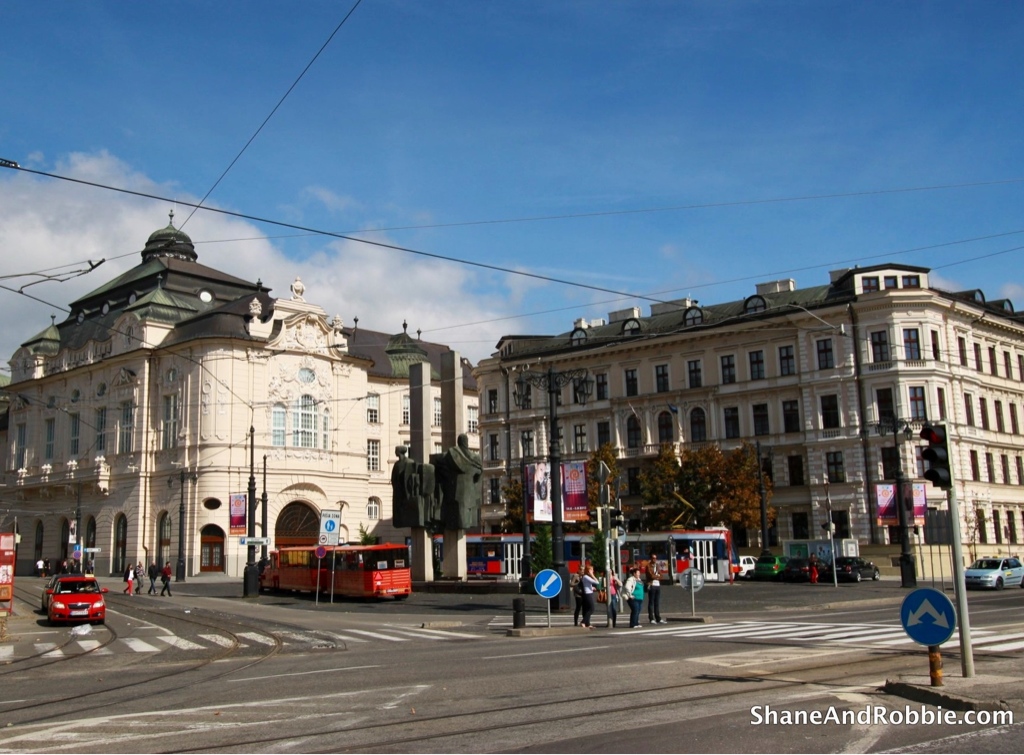 The good side of the Bratislavan cityscape – quite pretty and well cared for. 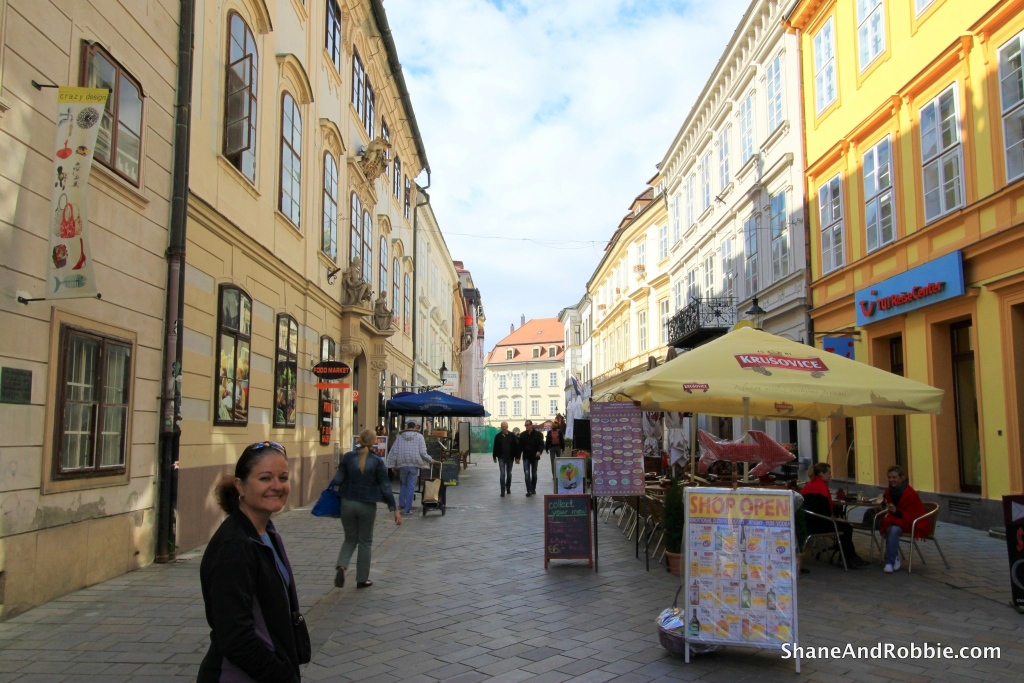 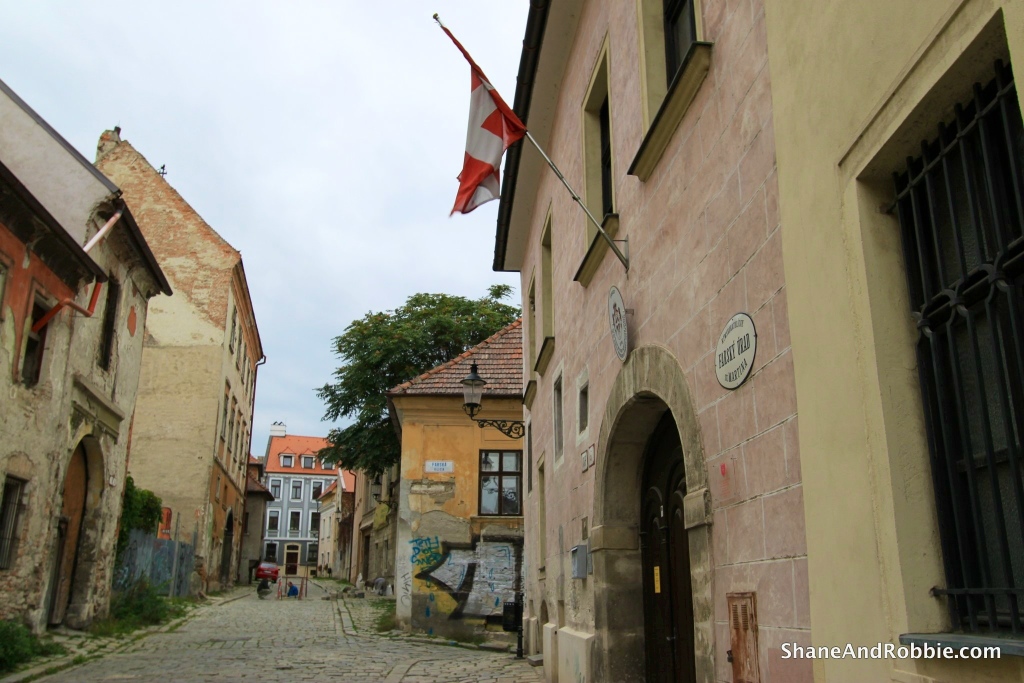 Literally one street back behind the touristy facade and this is what the REAL town looks like. 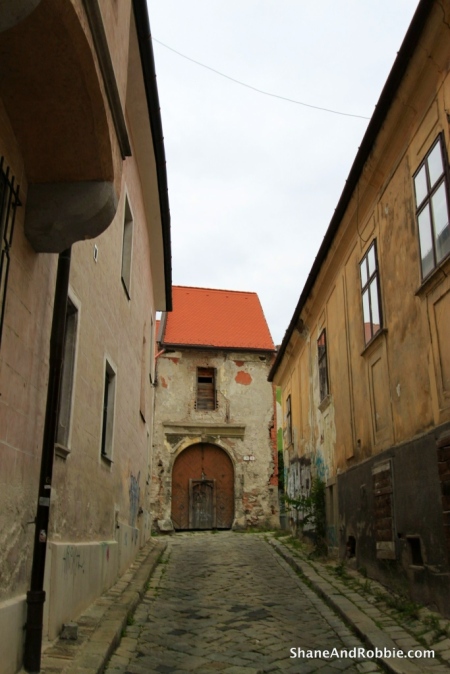 Bratislava is actually a very small city (it has a population of just over 460,000), and we easily saw all the major sights in 1 day. The old part of town was particularly pretty, with its small cobbled street, many fountains and quirky bronze statues (see below for more on this). The historical centre is only about 500m in diameter and sits along the banks of the River Danube; it contains an eclectic an mix of buildings – from 14th century medieval halls to 19th century palazzos, and everything in between.

The stará radnica (translation = old town hall) was built in 1370 and is one of the oldest buildings in Bratislava. 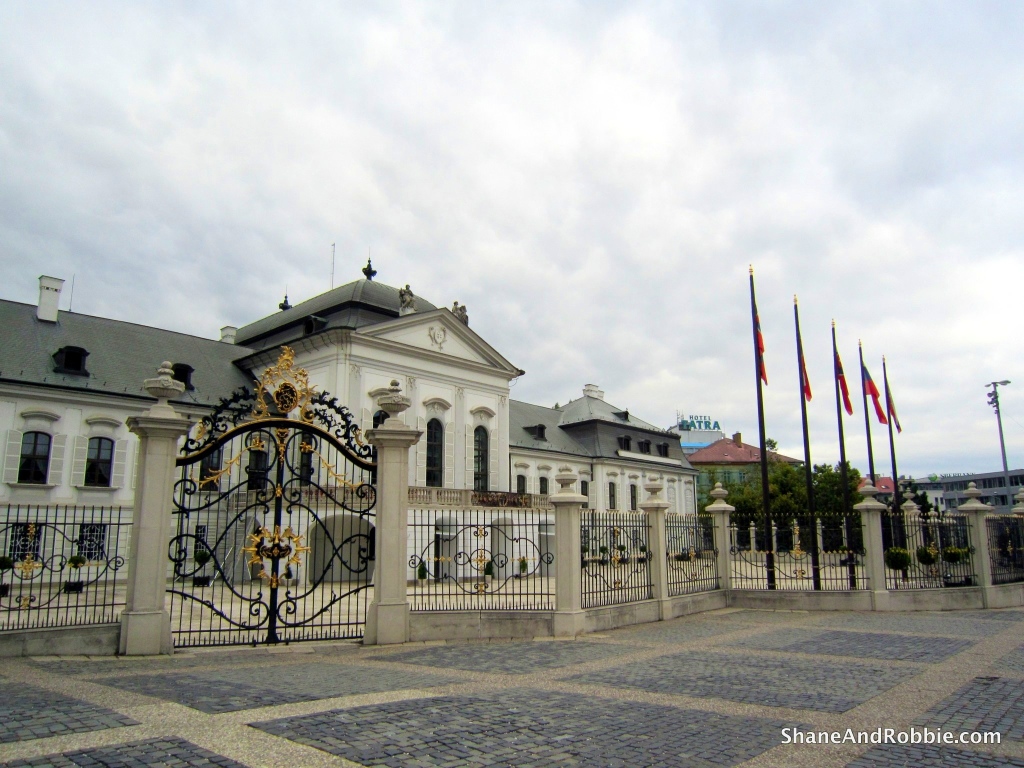 One of Bratislava’s fancier 19th century buildings. The Grassalkovich Palace is the residence of the president of Slovakia. 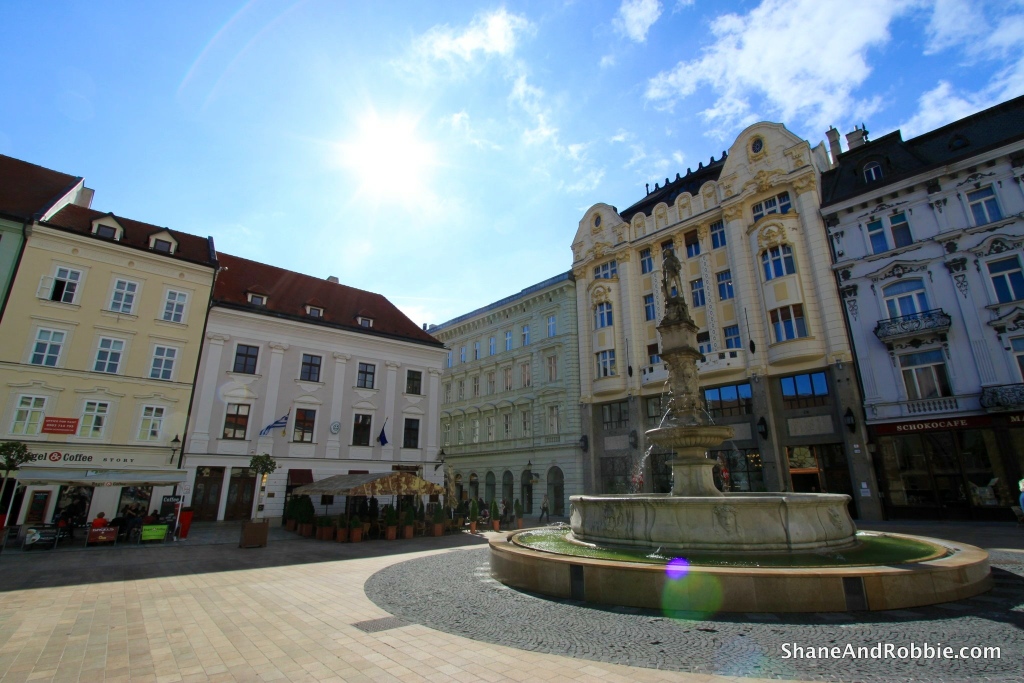 Bratislava was first settled by the Celts and 200BC and later became a Roman frontier town. Around the 5th century however, as the Roman influence was waning, Slavic tribes migrated to the area from the East and established a permanent settlement here. The settlement profited greatly from trade along the Danube and soon became a wealthy town. In the 9th century the local lords built a castle up on the hill behind the town: Castle Brezalauspurc.  This castle was extended and renovated numerous times, with its current incarnation taking shape in the 18th century. The castle today retains its prominent position in the cityscape and continues to function as the political heart of the state as it is used by the Slovakian parliament as their seat of government. 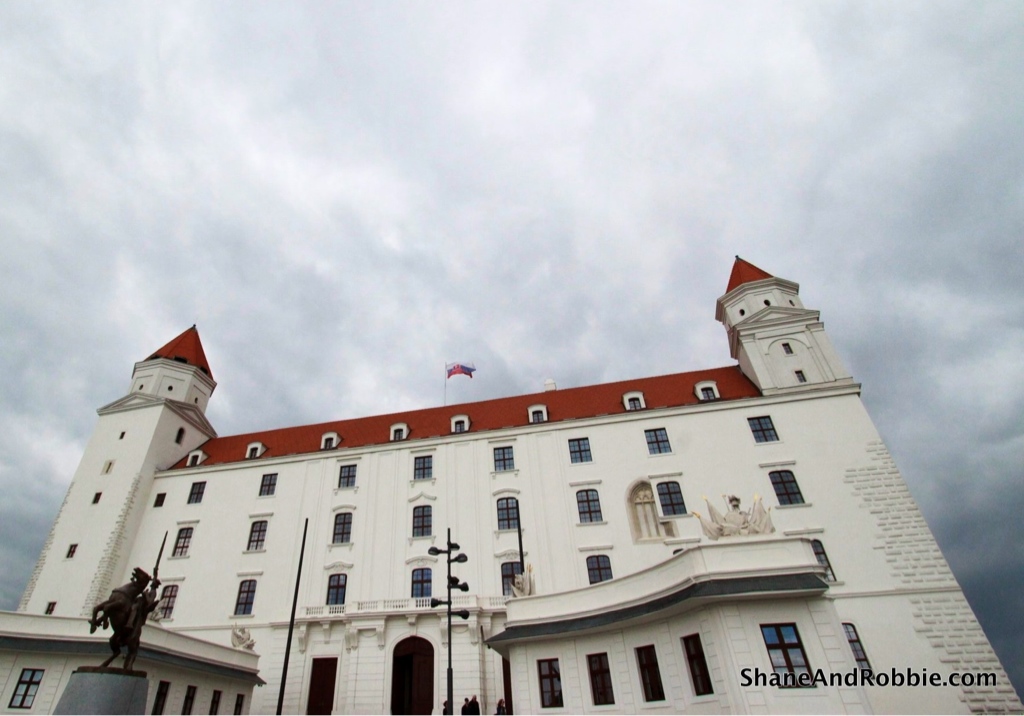 Castle Brezalauspurc is today the site of the country’s parliamentary sittings. 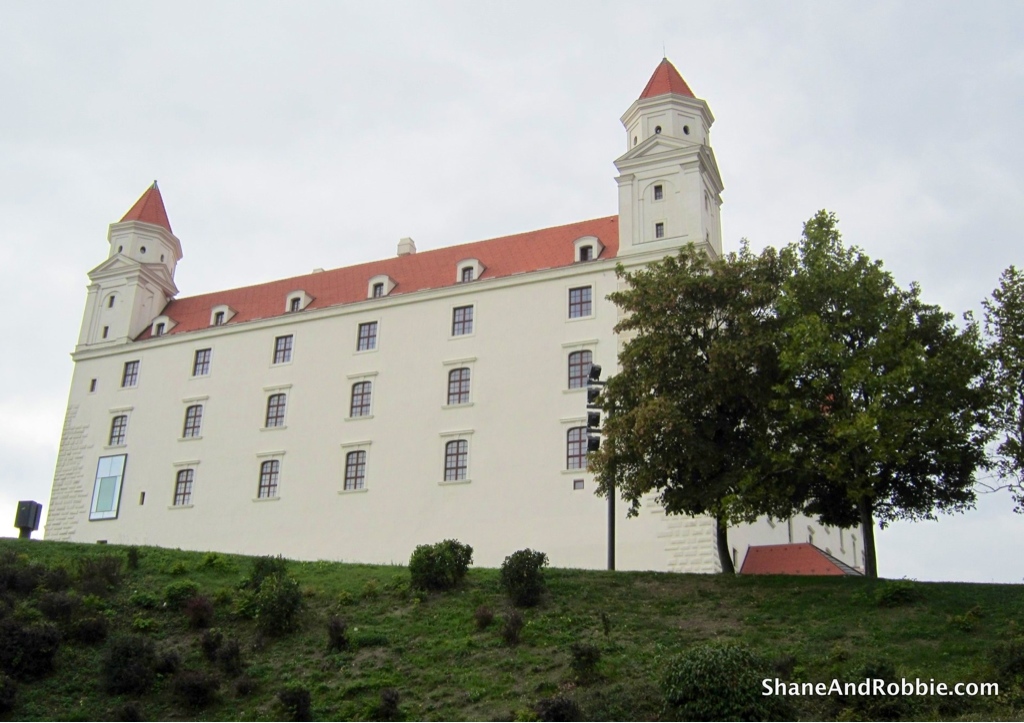 Castle Brezalauspurc sits on a hill about 85m above the old town, looking across the city and the River Danube.

Views over the city of Bratislava from the castle.

The town and its surrounds came under Hungarian rule in the 11th century and remained part of the Hungarian Kingdom (and thus the Holy Roman Empire and, later, the Austro-Hungarian Empire) for a 1,000 years. During this time Bratislava was actually called Pressburg The city became a key economic and administrative centre on the kingdom’s frontier. This strategic position destined the city to be the site of frequent attacks and battles, but also brought it prosperity and high political status. So important was the city of Bratislava that from 1536 to 1830 it was actually the capital of the Hungarian Kingdom. During these centuries, 11 Hungarian kings and queens were crowned in the city’s central cathedral, St Martin’s. 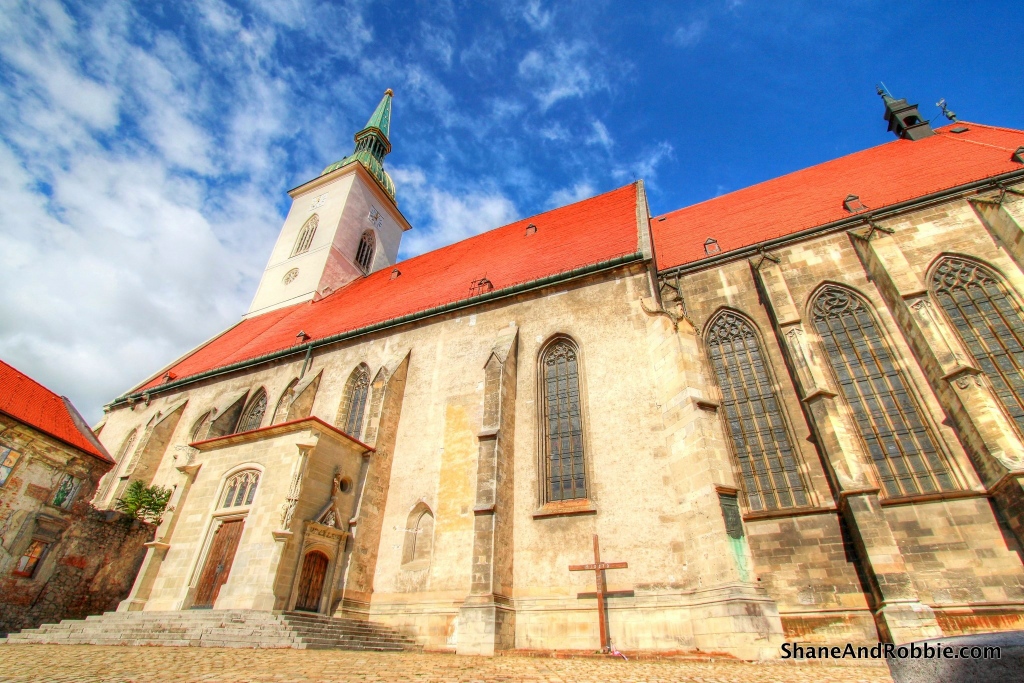 St Martin’s Cathedral, built in the 13th century, served as the coronation church of the Kingdom of Hungary between 1563 and 1830.

Following WWI many national borders in Europe were redefined and, in 1919, Slovakia was forced into a union with The Czech Republic. To shake off the last of the Austrian (Germanic) influences, the city was renamed Bratislava. Then, after the Communist Party seized power in Czechoslovakia in February 1948, the city became part of the Eastern Bloc. There are still many buildings around town left over from that Communist era. These functional but UGLY buildings a dotted throughout the old town, built on sites where older buildings were destroyed during WWII.

Bratislavans anticipated the fall of Communism with the Bratislava candle demonstration in 1988, and the city became one of the foremost centres of the anti-Communist Velvet Revolution in 1989. In 1993, the city became the capital of the newly formed Slovak Republic following the dissolution of Czechoslovakia. Since then the city, and in fact the whole country, has moved ahead in leaps and bounds. The city is one of Eastern Europe’s most prosperous and foreign investment in the region has contributed to a standard of living not seen in many former Communist countries. Obviously all this wealth doesn’t quite translate into good public works (e.g. repairing pot holes, cleaning up graffiti), but maybe that will come with time…. 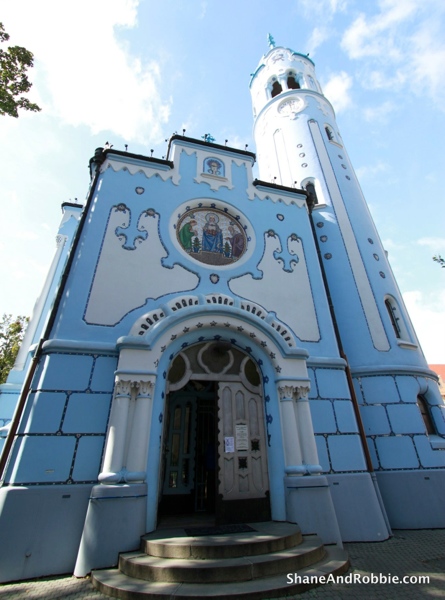 The Church of St Elizabeth is a Catholic Church in Bratislava that was built in the 15th century.

The Church of St Elizabeth is often called “The Blue Church”, for obvious reasons.

The amazing interior of the Church of St Elizabeth.

One of our favourite things about Bratislava’s old town were the statues hidden around the place. These quirky statues started appearing in the mid-1990s and were apparently commissioned by the local council in an effort to create a unique tourist attraction. the statues were such a hit that more and more have been added over time. I’m not sure how many there are in total in the city, but these are the ones we found.

The guy peeping out of the sewers is called Cumil. Not sure what he’s up to, but he’s certainly got character!

This guy, Schone Naci, was a well known local figure in Bratislava in the early 20th century. A mentally ill man, he paraded the streets of Bratislava in old, but elegant attire, greeting passers-by by raising his top hat. 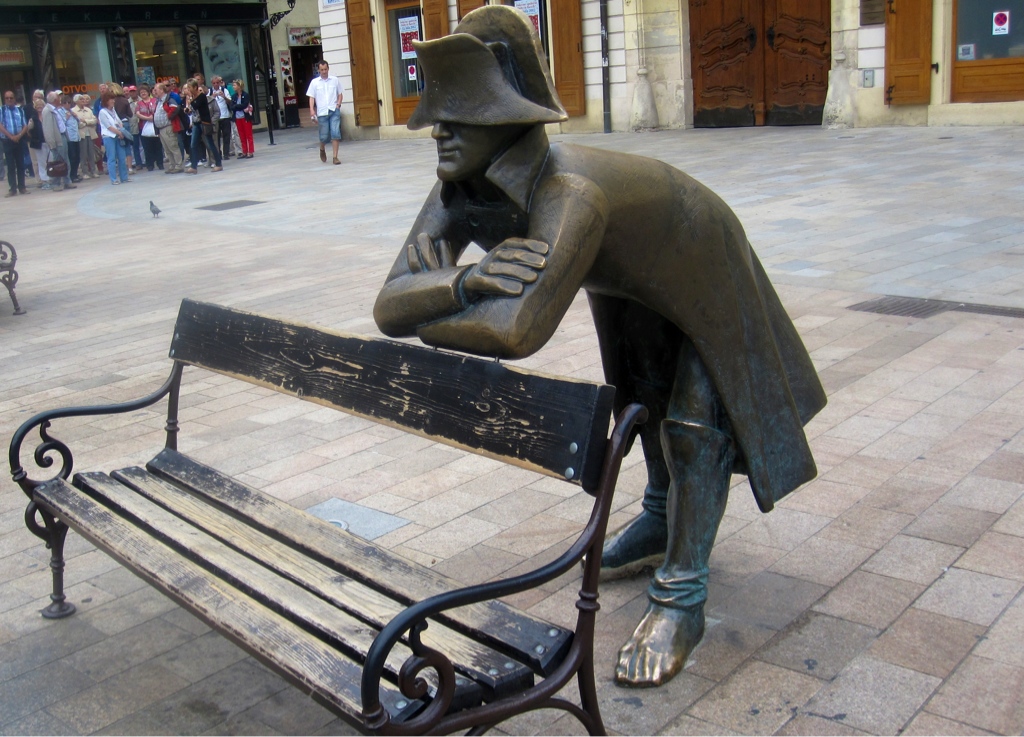 Leaning over a bench in the hlavne namestie (translation = main square), this French soldier may have been modelled on one of Napoleon’s soldiers in (Napoleon I and his army visited Bratislava in 1805). 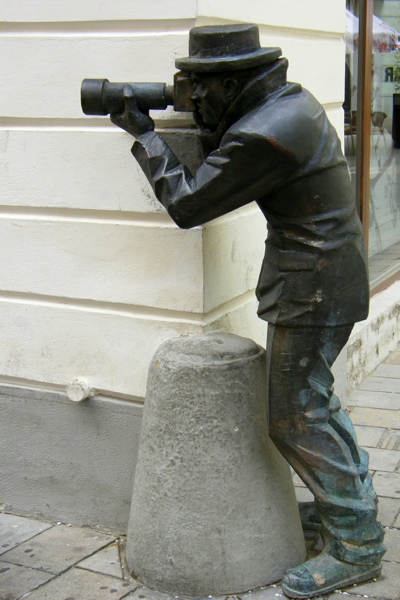 Damn paparazzi! This sneaky character is forever trying to get photos of unsuspecting passers-by.

Bratislava is just our first stop in Eastern Europe; tomorrow we head back to Vienna by train to then catch a bus to the tiny medieval town of Cesky Krumlov in the Czech Republic (the map below gives you an idea of where we’re headed over the next couple of weeks).

Our travels over the next fortnight will take us through Slovakia, The Czech Republic, Poland and Hungary.

Bratislava has actually been quite a nice,”soft” introduction to the Eastern Bloc countries – a little rough around the edges and very different in vibe to any of the Scandinavian or Germanic places we’ve been, but not overly unsafe or “dodgy”. We’re pretty excited to see what The Czech Republic will be like, though it’ll be a bit of work getting our heads around the Slavic languages (we’d just gotten goodish at German too!). And no more giant schnitzels and beer from now on – it’s all going to be dumplings and beer for a while now! Will let you know what we think of Cesky Krumlov tomorrow night. Dobrú noc for now…. 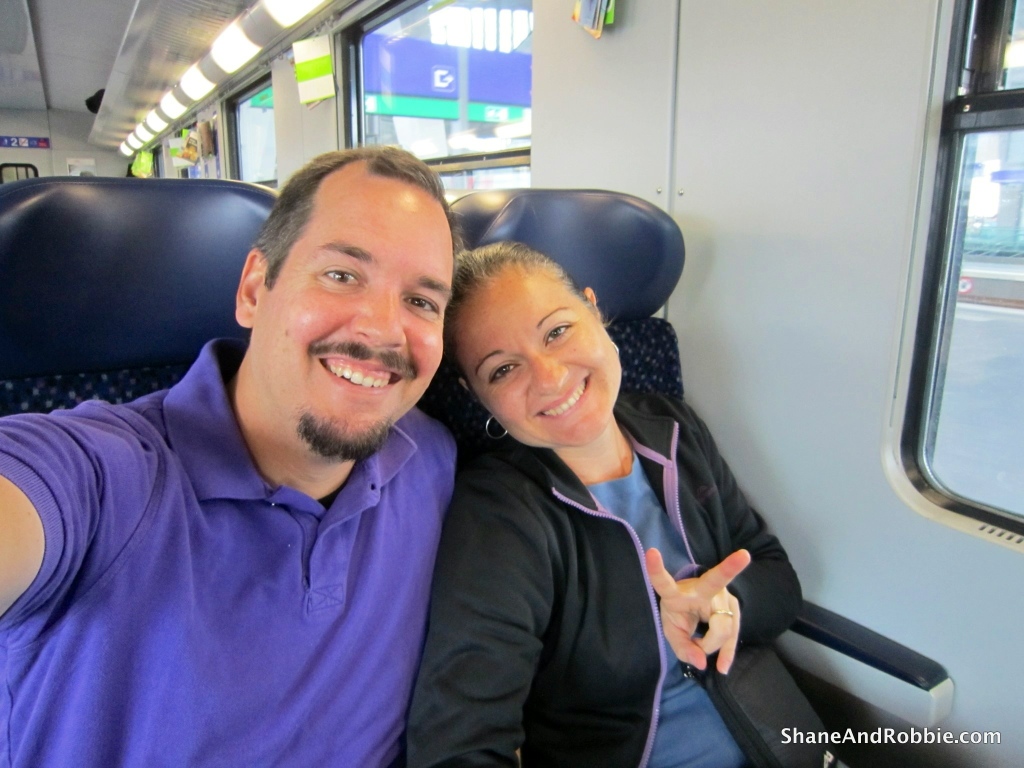 Keen to see what The Czech Republic will bring…