The old town, the new town, a castle, a bridge and just a couple of churches…

Prague is unique. It’s skyline is unlike any city we’ve ever seen – all spires and black, pointy Gothic roofs. And the vibe of the city is actually pretty cool – not at all as dodgy or unsafe as we were expecting; this feels like a city buzzing with creative energy and potential, but also one steeped in history and rich in heritage. Standing on Charles Bridge early this morning (before the hordes of tour groups descended), it was great to be able to linger and soak in the feel of the city.

We intentionally had an early start to our Friday, keen to set out and explore the city while it was still quiet (the sense of over-crowding is particularly bad in Prague because most of the streets are so old and narrow that it doesn’t take many people for you to feel like you’re penned in). Lucky for us it seems the city awakens quite early too so we easily found a coffee shop open where we could grab our daily dose of caffeine. We then set out across the Staroměstské Náměstí (translation = Old Town Square) and stopped to admire some of the sights we saw yesterday – just with a bit more sun around this time. 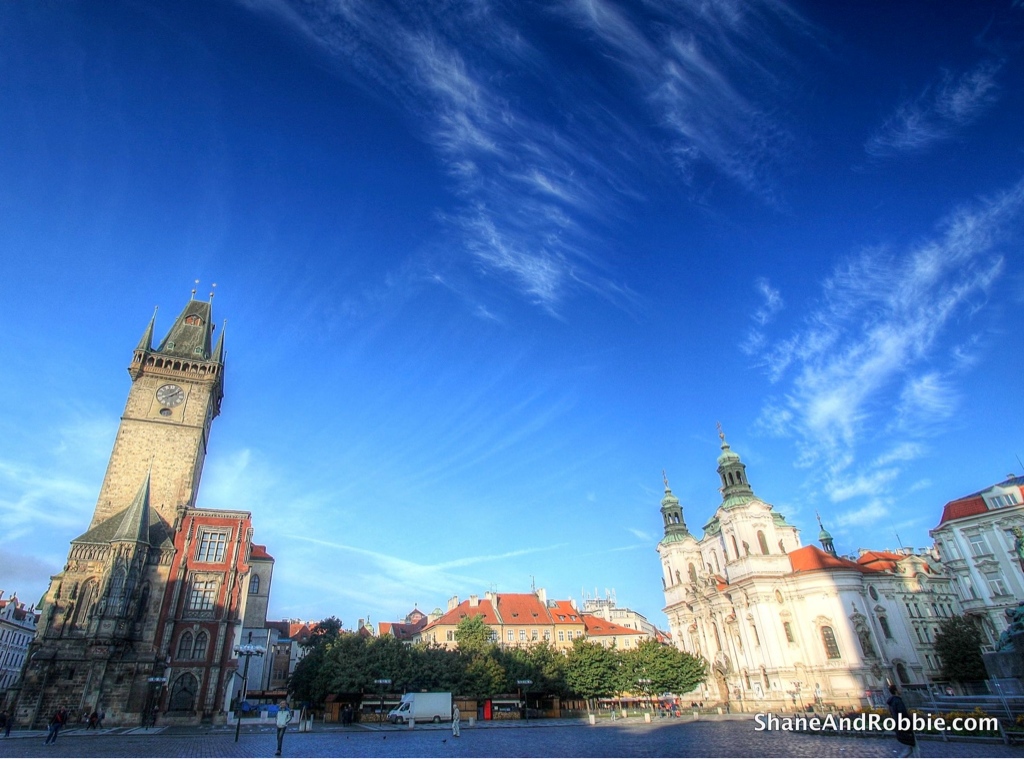 The Old Town Square this morning. Look – no people!

The silhouette of the Church of our Lady before Tyn is amazing, even at 7:00am.

Loving Prague in the wee hours of the morning.

From there it was a short stroll down to Karlův Most (translation = Charles Bridge), where we lingered for a while, enjoying views of the  Vltava River below us, the Staré Město (translation = Old Town) on one side and the Nové Město (translation = New Town)‎ on the other. Dominating the landscape was Pražský Hrad (translation = Prague Castle), high upon its hill behind the New Town. The Charles Bridge was built in 1357 under the auspices of Emperor Charles IV. At the time of its construction the bridge was considered a great feat of engineering, and even today it seems amazing to me that the bridge still stands, despite 650 years of use! It’s a surprisingly large bridge (10m wide and 620m long), lined on either side by statues of saints and religious figures. Without the crowds of tourists, buskers and hawkers that normally crowd the bridge during the middle of the day, it was actually a very peaceful spot from which to admire the unique city that is Prague.

Awesome views from Charles Bridge across to the New Town and Prague Castle.

The statue of Emperor Charles IV that sits at the beginning of the bridge. Just to remind you who the bridge is named after.

Once we’d had our fill of Prague we headed up through the Nové Město towards the castle. Prague Castle is the largest castle in the world; it occupies an area of almost 70,000 square metres and is really more of a town within a town. There are numerous palaces, churches, stables and other buildings that all together make up Pražský Hrad. The original castle, built in 870AD consisted of just one fortified building; over the centuries however this was extended and added to until, in 1918, the castle became the seat of government of the Czechoslovak Republic and home to the nation’s president. Today the castle still houses the Czech parliament and the President’s home, as well as numerous museums, hotels, restaurants, cafes, shops, concert halls and conference centres. 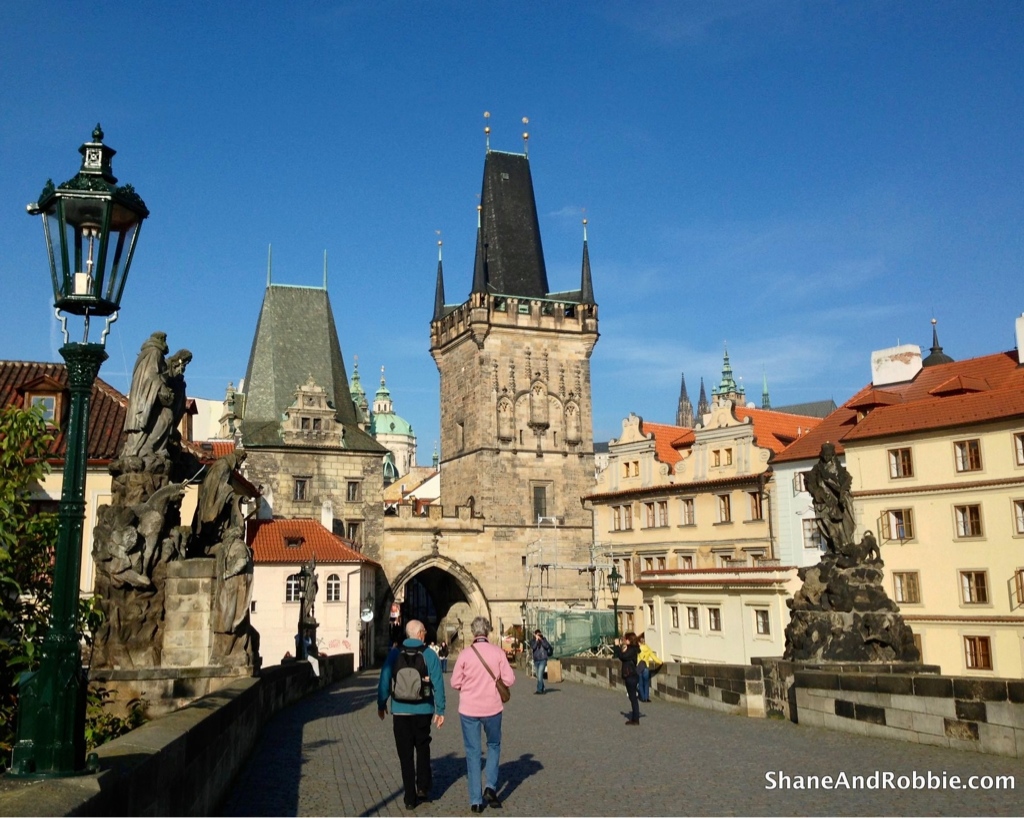 Crossing over the bridge into the New Town of Prague. 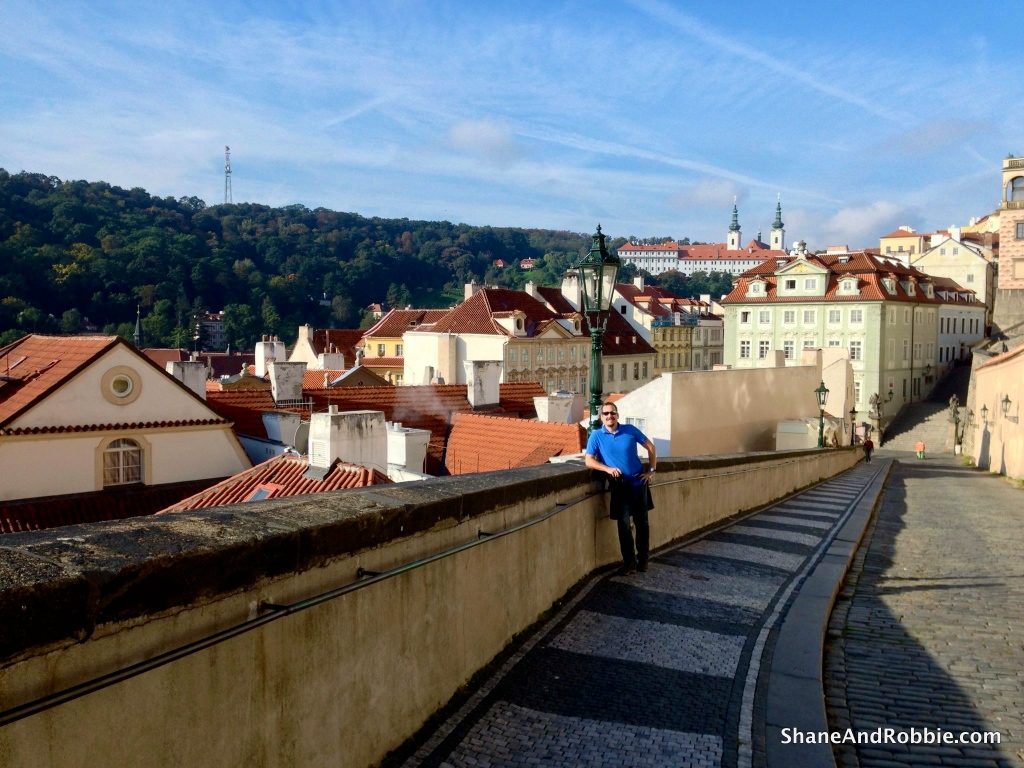 Heading up through the New Town towards the castle. The higher up we went, the better the views got.

Loving the views from the castle across the city.

There are so many things you can see within the castle that just deciding which bits to visit was an effort! We decided to stick to the sights that would give us the best insight into the palace’s history and the life of the ruling family, starting with the Old Royal Palace. This is the oldest part of the castle, dating back to the 9th century. It was here that the Přemyslids first established their seat of power. The Přemyslids were the royal Bohemian (i.e. Czech) family that ruled Bohemia and Moravia (which today make up modern-day Czechia), as well as parts of Hungary, Austria and Silesia (which is today part of modern-day Poland).

The Přemyslid dynasty has beginnings dating back to the 9th century when they ruled a tiny principality around Prague. Over the next 500 years they gradually conquered much of Central Europe and became one of the most powerful dynasties in the region. The peak of their power came when Charles IV became Emperor of the Holy Roman Empire. The dynasty began to collapse however following after the untimely death of King Wenceslaus II, and the assassination of his only son, Wenceslaus II, which brought about the end to their rule. The House of Haspburg then claimed the Bohemian crown in 1526, adding it to their already extensive empire.

This dining room in the Old Royal Palace had heralds from all the regions in Bohemia painted on the ceiling.

Vladislav Hall was the scene of coronation festivities and banquets.

One of the restored rooms within the Old Royal Palace. This room was used as an office effectively and lined with portraits of the Přemyslids.

Just having a break from all the touristing… 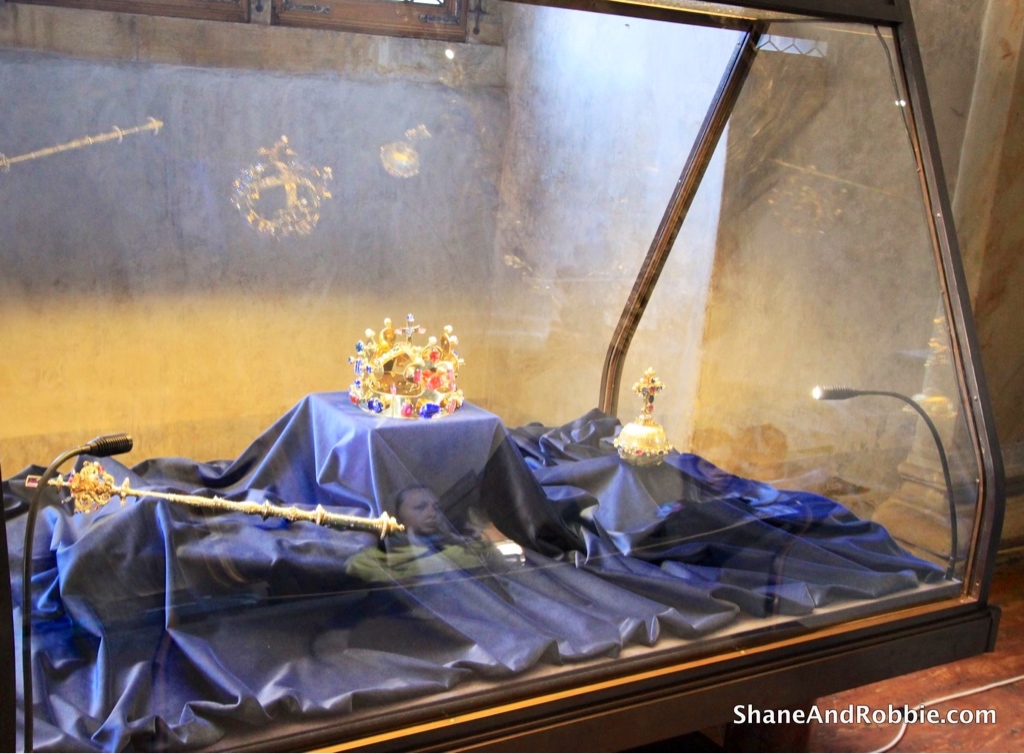 The Bohemian Crown Jewels, also called the Czech Crown Jewels, were made for the coronation of Charles IV in 1347, making them the fourth oldest in Europe.

From the Old Royal Palace we travelled down “The Golden Lane”, an area within the castle once inhabited by the castle servants, bakers, butchers, candle makers, goldsmiths and other craftsmen. Today the old houses and workshops are set up like small museums, each a testament to the life and work of the craftsmen and women of the medieval era.

The Golden Lane was lined with tiny little houses and workshops once belonging to craftsmen and women.

The inside of the candlemaker’s house and workshop.

At the end of “The Golden Lane” we stumbled across the original castle prison tower and associated torture chamber. It’s horrendous to see what human beings will do to each other. We did not linger long in that cold, dark place.

They had a display of some of the torture equipment used. Pretty gruesome.

We did however linger within St Vitus Cathedral, the biggest and most important church in Czechia. This is where kings were crowned, royals married and christened, and where the Archdiocese of Prague had its seat. The church is huge and a stunning example of Gothic architecture – it was easily as grand as Nidaros Cathedral in Trondheim, or the DUomo di Milano. Built in 1344 atop the original 9th century church, the cathedral was named for St Vitus as it houses the arm of the saint. The stained glass windows within St Vitus Cathedral were especially captivating, with the morning light shining through them and painting the church red, yellow and blue. 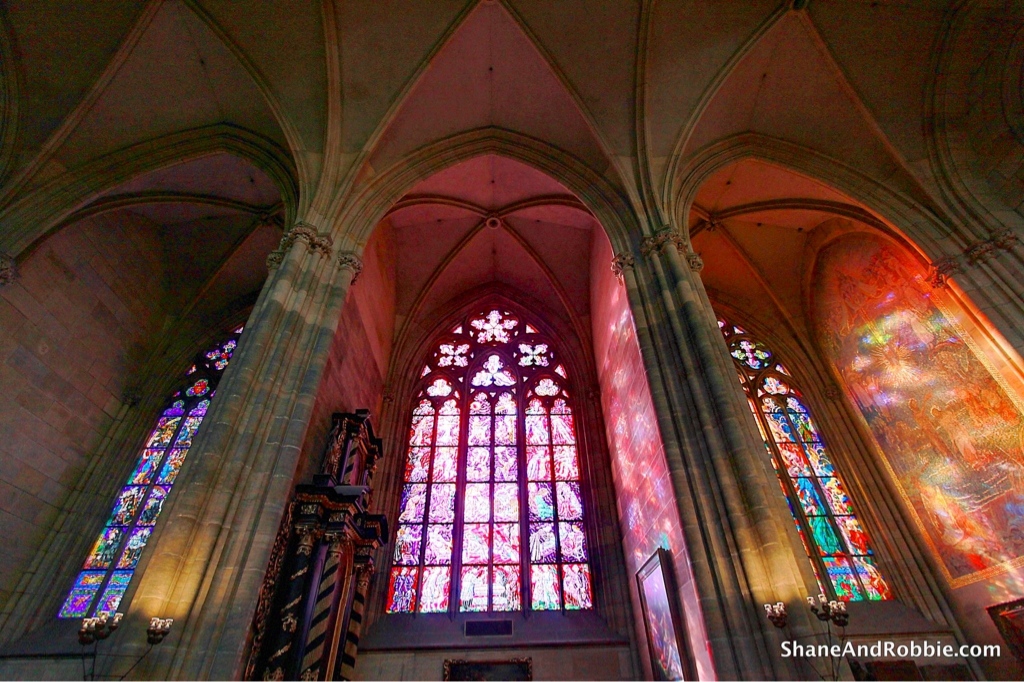 The amazing stained glass windows within the cathedral.

The vaulted ceiling of the Gothic St Vitus Cathedral.

Our final stop within the castle compound was St George’s Basilica, the oldest surviving church building within Pražský Hrad. Built in 920, this simple Romanesque church is dedicated to St George* – like many churches around Europe.

*We’ve seen heaps of churches in our travels dedicated to St George; turns out St George is one of the most venerated saints in the Catholic (Western and Eastern Rites), Anglican, Eastern Orthodox, and the Oriental Orthodox Christian churches.  George was born in Palestine around 270AD and was a soldier in the Roman army. He was raised Christian and became venerated as a martyr after refusing to convert, even after the Roman Emperor at the time (supposedly) offered him lands and wealth to renounce his religion. George was executed by decapitation on April 23rd 303 and his body was returned to Palestine for burial. And the whole story of St George and the dragon is believed to be a parable where the dragon represents Satan and/or heathens.

St George’s Basilica, named after that dragon-slaying saint from the 4th century. 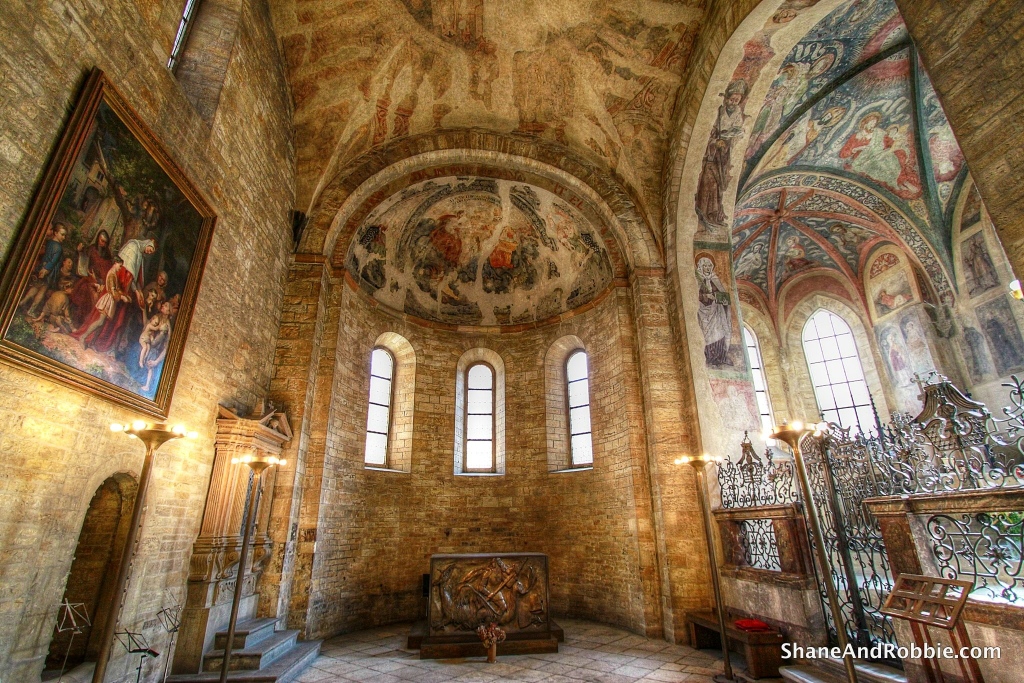 St George’s Basilica was much simpler in style and much older than St Vitus Cathedral.

From St George’s Basilica we found our way to the Castle Gardens wandered around them for a while until our stomachs told us it was time to find some food. We had some fantastic beef goulash, served with the obligatory kinedliky (translation = canon-ball sized potato and bread dumplings), in a small restaurant in one of Prague’s back streets. Our afternoon was then spent meandering through the streets of Prague, checking out all the cool old buildings, Bohemian crystal* shops and getting ourselves throughly and wonderfully lost. We even stumbled across a local market in one of the squares where we were able to indulge our new-found love of trdelník.

*I found out today that Bohemian crystal is actually just fancy glass. This fine, decorative glass has been hand-made in Bohemia (i.e. Czechia) since the 13th century. Artisans in the area had easy access to all the raw materials required for glass making and Bohemian glass became famous around the world because of its clarity and strength. Even today it seems people can’t get enough of the stuff – it’s sold everywhere around here (I’m not convinced it’s all still hand-made here in Czechia though). As much as we would love a set of Bohemian crystal glasses, they wouldn’t fit in our backpacks so we’ve had to pass on the opportunity to splurge.

Views of Charles Bridge and Prague Castle from one of the many other bridges across the Vltava River.

Walking through Prague this afternoon, admiring the architecture.

Wandering the streets of Prague today, every now and then we’d come across hidden pockets of wonder like this.

What a day! We’re back in our cosy little apartment again now, happily reviewing our photos and marvelling at how lucky we are to be here in Prague. With all its old buildings, churches and palaces, this city definitely has something of the fairytale feel to it – but not the bright, saccharine, Disney-type fairytales. The Prague kind of fairytale is a darker, eerier kind of story from much older times. The kind of fairytale that takes place in a dark, Gothic castle and in dark, narrow cobbled streets. And that really is what makes Prague so unique and so charming.