A day trip from Prague to Kutna Hora

Prague is indubitably an amazing city, but with all the crowds of tourists in town cramping our style a bit, we decided we needed to “go bush” and get out of the city today. So we headed out to the small town of Kutna Hora to see its famous Church of Bones and cathedral (St Barbara’s).

Kutna Hora is about 75km from Prague and easily reachable by train. The town itself is quite small (population about 20,000), and relatively modest by modern Czech standards. Up until the late 1500s, however, this little town was one the Kingdom of Bohemia’s most important centres; because, you see, it was here that all the coins for the Bohemian Kingdom were minted. Minting of coins began in Kutna Hora in the 13th century after silver was found in nearby hills. The wealth and status of the town increased dramatically over the next 300 years under the auspices of this medieval mining boom. Such a wealthy town obviously required a cathedral befitting its status and so St Barbara’s was built.

The cute little provincial town of Kutna Hora was once a wealthy, thriving medieval city. 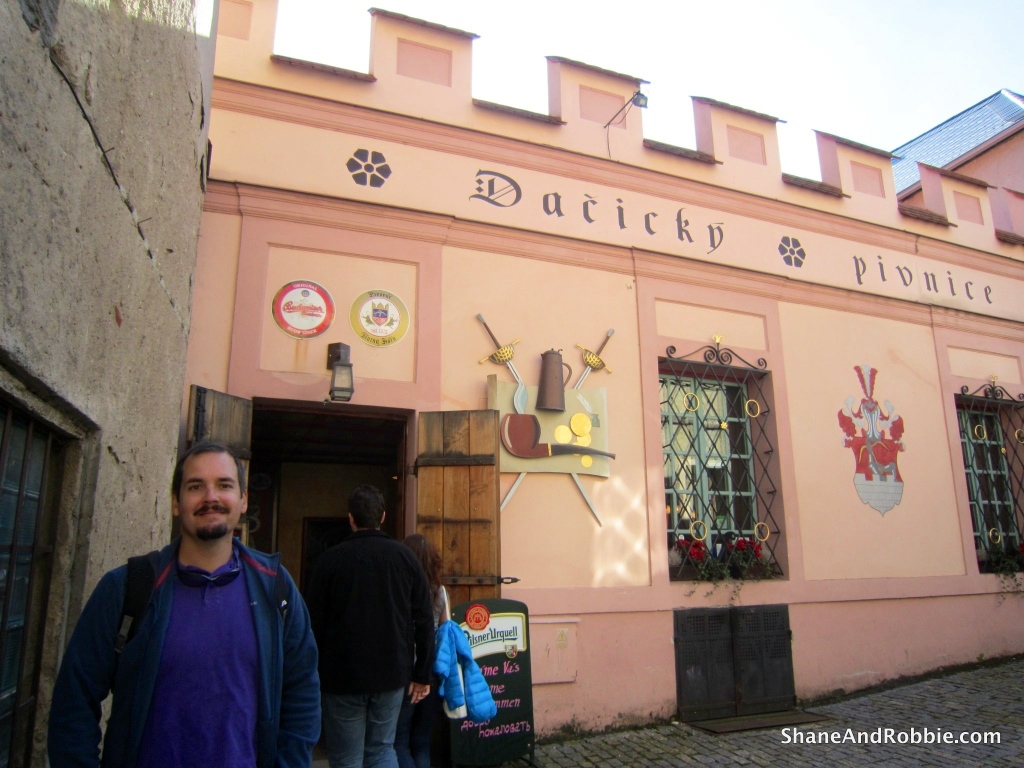 The old part of town was lovely – all cobbled streets and beautiful buildings.

Kutna Hora is about an hour away from Prague by train, but a world away in terms of scenery.

St Barbara’s Cathedral was built in the 14th century, behind the town of Kutna Hora on a cliff overlooking the Vrchlice River valley and the oldest silver mines in the area. The church was dedicated to St Barbara, the patron saint of miners; and its interior is decorated by frescos depicting daily life in a medieval mining town. All very appropriate given the town’s fortunes were built on argentite mining and metallurgy! It was a stunning church – very striking with its 3 large spires and ornate Gothic exterior. 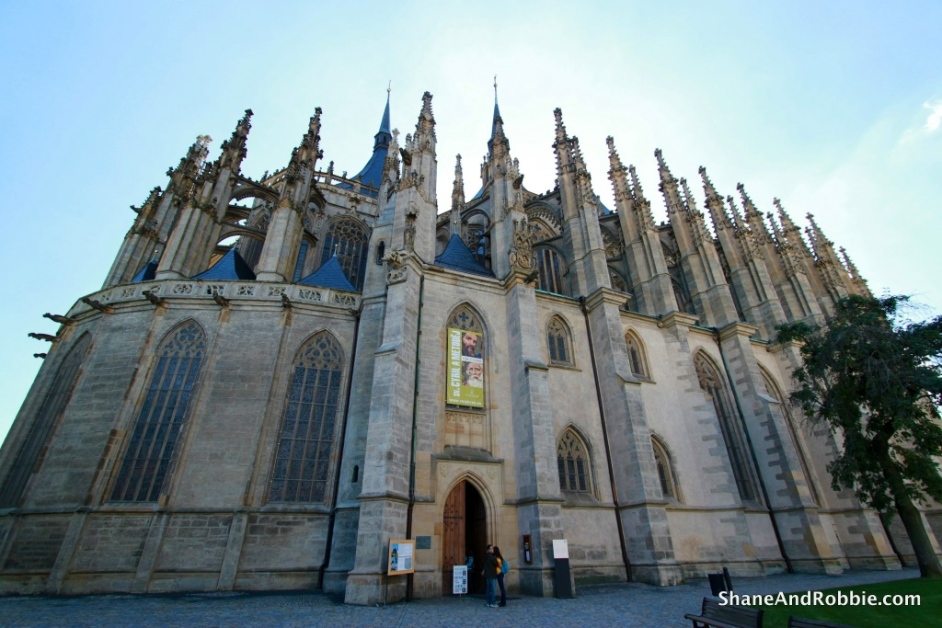 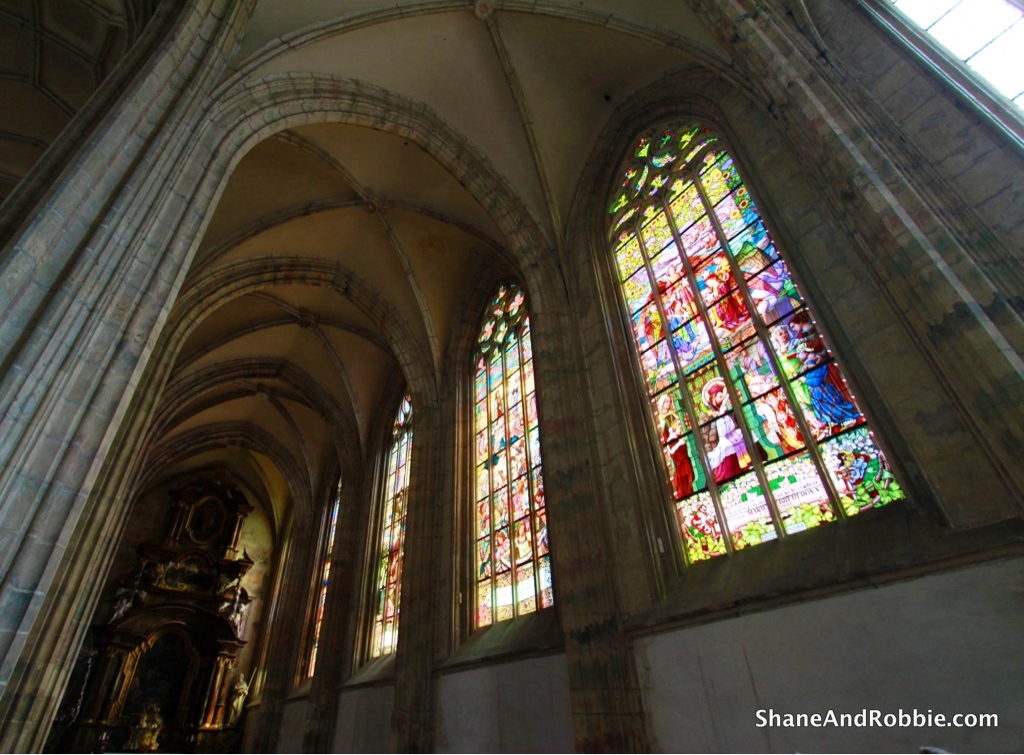 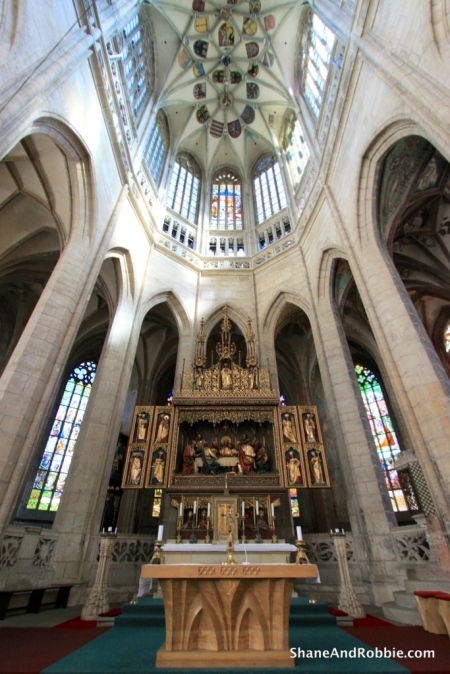 St Barbara’s Cathedral was built in the 14th century at the height of Kutna Hora’s wealth.

As well as St Barbara’s Cathedral we also saw the Church of Our Lady is a Gothic church on the outskirts of Kutna Hora. It was first built in the 14th century and then rebuilt in 1708 after it was burnt down during the Hussite Wars. The church itself wasn’t quite as grand as St Barbara’s but is quite unique for a Gothic church in that it has lots of huge windows and is very light (most Gothic churches we’ve seen are so dark and eerie).

The Church of our Lady was rebuilt in the 18th century to be bright and airy, a rarity in Gothic architecture,

The Church of Our Lady, Kutna Hora. 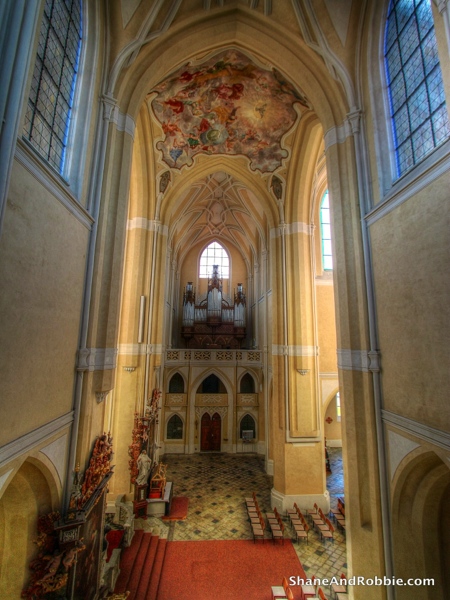 The Church of Our Lady was built in the 14th century but then destroyed during the Hussite Wars.

The most amazing sight we saw today, however, was definitely the Kostnice v Sedlci (translation = Sedlec Ossuary). Or, as it’s often colloquially referred to: the Church of Bones.

Kutna Hora’s Church of Bones is a tiny church, a little way out of town, built in the 12th century on the grounds of the Sedlec Monastery (which was founded in 1142). The church and its surrounding cemetery were originally just used by the monks, but then, in 1278, the abbot of the Sedlec Monastery went on a diplomatic mission to the Holy Land. He brought back to the monastery a handful of earth from Golgotha (where Jesus was crucified), which he sprinkled over the cemetery. This made being buried in the Sedlec Cemetery very popular and the number of graves soon reached 10,000 or more (which is A LOT given how tiny the cemetery really is). To further worsen the congestion, a further 30,000 plague victims were buried there during the 14th century. 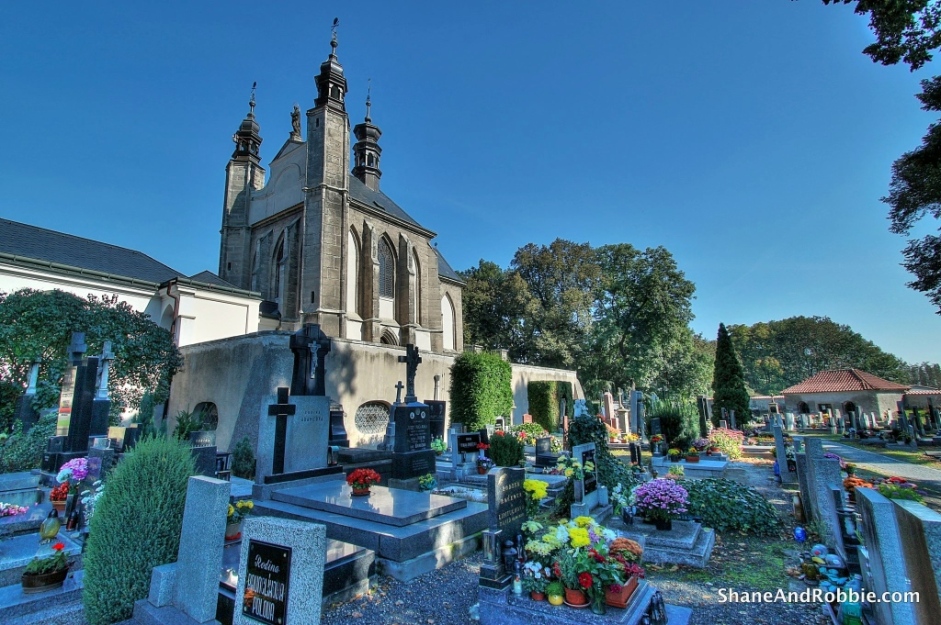 Eventually the crowding in the cemetery got so bad that, in 1511, the monastery’s abbot ordered the graves dug up and an ossuary built below the existing church for all the bones. The story goes that the bones from the 40,000+ abolished graves were then arranged in piles and used to create some truly amazing structures by a half blind, slightly deranged monk. Exactly what his intentions were and why he designed such fantastic arrangements of bones, is not known, though his efforts have most certainly created something unique and fascinating.

The skulls of many of the dead formerly buried in the cemetery are used to decorate the arches in the ossuary. 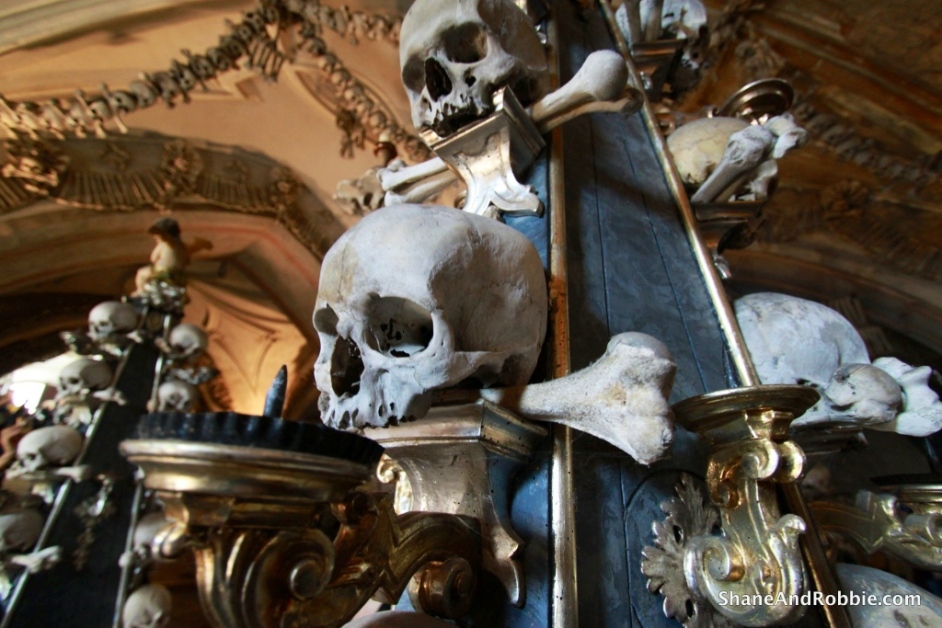 Bones were even used to create a copy of the local lords’ herald.

We expected the Sedlec Ossuary to be quite scary and creepy, and certainly it is a little macabre, but it’s also amazing and beautiful in its own way. The plaque by the door of the ossuary puts in quite well I think: “This church is not a celebration of death. It symbolises the equality of people before the throne of God.” 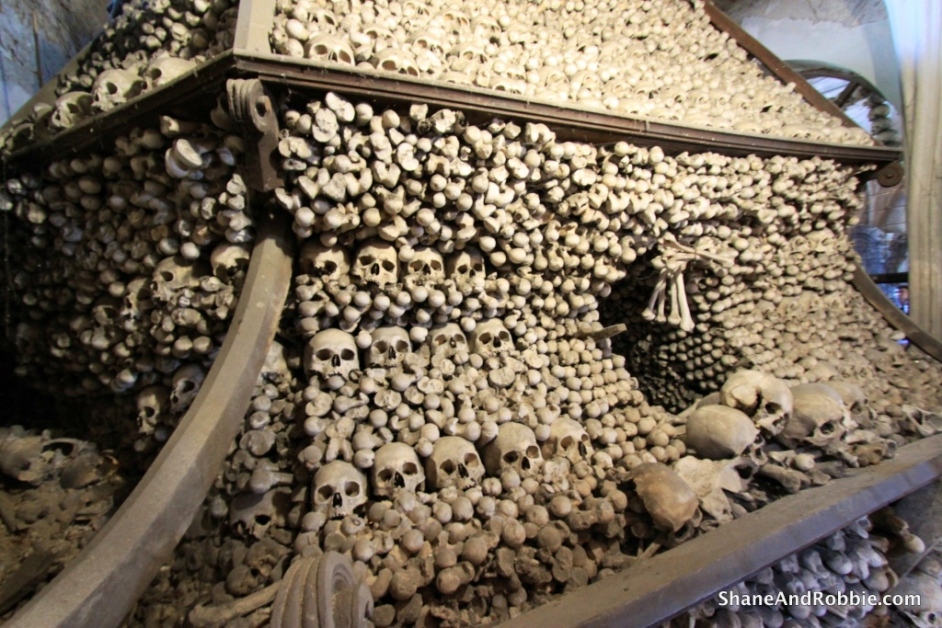 “This church is not a celebration of death. It symbolises the equality of people before the throne of God.”

The Earthly remains of more than 40,000 people were used to decorate the ossuary.

Using bones to decorate a church is certainly unconventional!

Overall we had an amazing day visiting Kutna Hora and its churches. The grand Gothic architecture of St Barbara’s, the bright airiness of the Church of Our Lady, and the bone sculptures of the Sedlec Ossuary have all left their impression on us, and certainly made for a memorable day. Tomorrow we leave Prague with our tour group, and head by train up into the mountains to spend the day hiking and getting back to nature. See you then!

A great day in Kutna Hora.