We had a fantastic day today driving around Maramures in a little private bus with our tour group and a local, English-speaking guide who showed us some of the region’s premier heritage sites and best valley views.

As you know if you’re a regular reader, we arrived here in Vadu Izei late last night and so had little opportunity yesterday to explore the area we’re in. We made up for that today though with our driver Petrov and local guide Nikolai taking us all over Maramuers. We went up hills, down hills, over rivers and through forests and got to see some of Romania’s oldest traditions brought to life. As I mentioned yesterday, Maramures is Romania’s poorest and most traditional regions. Its isolation effectively protected it from the worst of Ceaușescu’s particular kind of Communist dictatorship and allowed many of the old practices and beliefs to continue here. As a result this area has almost been locked in a time warp for the past century; only recently have a few trappings of modernity begun to appear. For us this meant we got the chance to experience something of the old, unspoilt Romania. 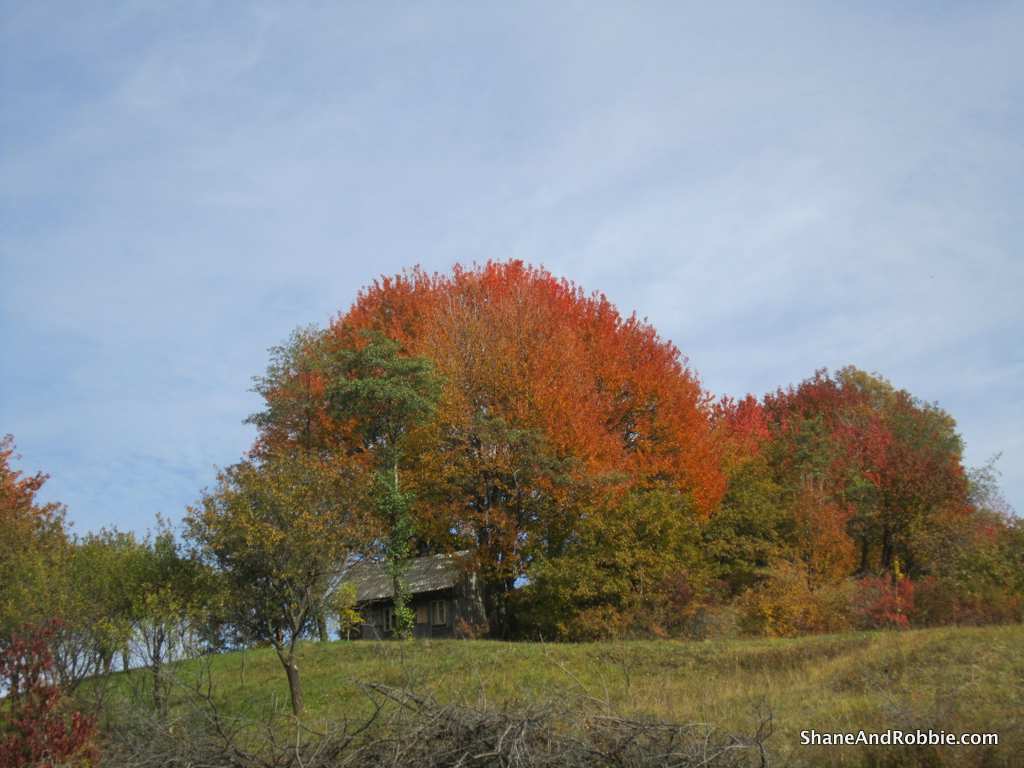 The beautiful autumn scenery of Romania.

This is like a land stuck in a time warp.

We started our explorations in the village of Sapanta, famous for its Merry Cemetery. The graveyward is so named because the wooden crosses that adorn the tombstones are all painted bright colours and contain inscriptions that describe the life and character of the deceased in a whimsical and often amusing manner. Stan Patras, a local woodcarver and artist started the tradition of carving and painting the wooden crosses in 1935. He painted each cross blue as this is the traditional colour of hope and freedom in Romania and then added a witty epitaph about the deceased. Every cross told a different story, with painted pictures and inscriptions describing how people lived, their occupations and how they died. Patras passed away himself in 1977 but his apprentices continue his work. It was actually a lovely little cemetery; the epitaphs really helped bring the person to life in a way and seemed to celebrate their lives rather than just mourn their deaths.

The Merry Cemetery in Sapanta, with its bright blue crosses and witty epitaths. 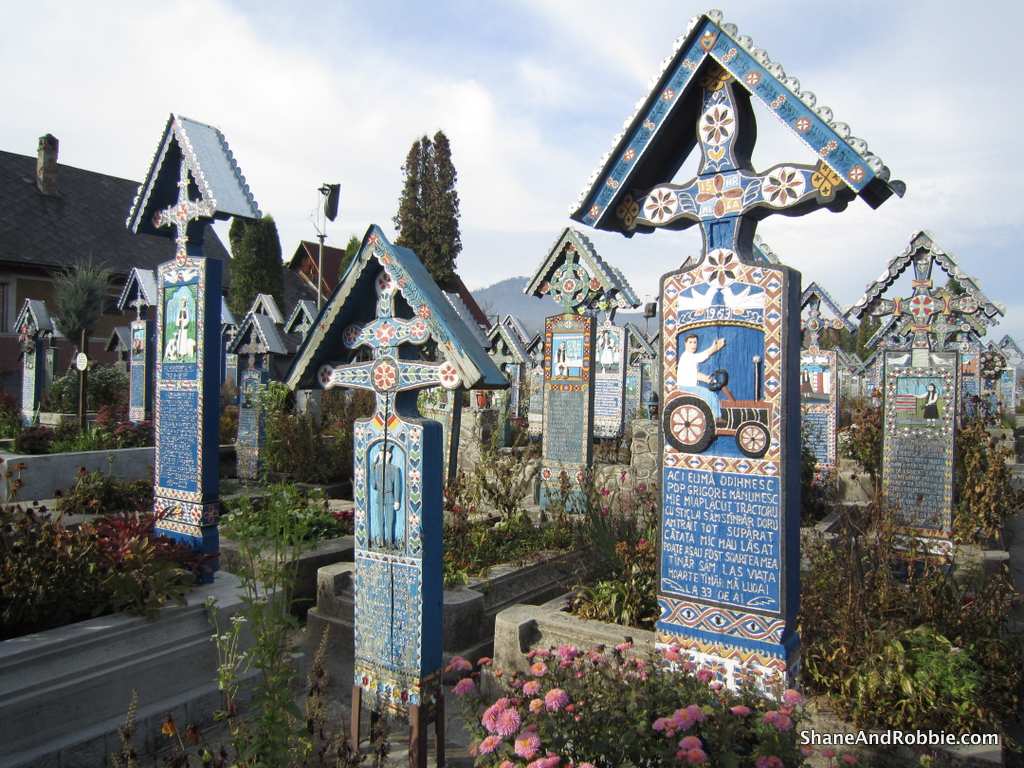 Each cross tells the story of that person’s life and loves. It was very touching and certainly unique.

From the cemetery we continued on a little further to a workshop set up for the local craftsmen. There was an old school mill at work grinding corn into meal, and a water-powered stone pounding away at wool to create felt. Women were sitting around spinning yarn from cleaned wool and knitting the yarn into socks or jumpers. There was even an old Romanian gentleman hard at work brewing horinca, the local version of fruit schnapps. He looked like he was about 100 years old, all brown and crinkled up like a walnut. He had us all try some of his produce and helped himself to a few tots as well, after which he proceeded to entertain us with a traditional Romanian song about a young man seeking a wife. Nikolai, our local guide, translated some of the song for us but gave up at a certain point as the song became “too rude to translate” apparently! 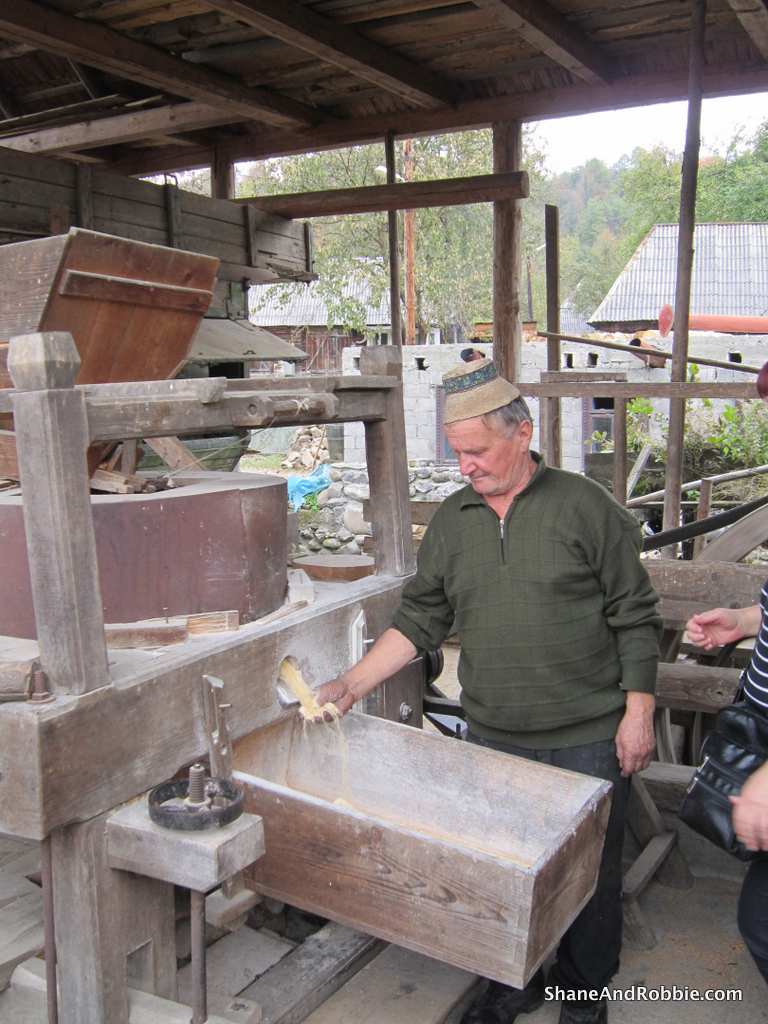 Singing us a song about young love (and lust).

We also saw a master woodcarver and his apprentices at work making gates, balconies and balustrades for a new house being built in the village. Much of their work was ornately decorated with the “Rope of Life” being a commonly repeated pattern. The “Rope of Life” is essentially a thick rope made up of 2 strands interwoven and knotted together. When rendered in colour one strand is white and the other black to signify the good and evil potential of life. The work the carpenters were doing was amazingly detailed and obviously in high demand as there were 4 guys all flat our working – most of the houses and even churches in this area are wooden so it makes sense that their skills would be in high demand.

The master woodcarver whose workshop we visited.

By this stage it was lunch time and we were treated to a simple picnic in the Romanian countryside. It was so quiet and peaceful sitting on the grassy hill, overlooking the valley, eating our cheese and ham sandwiches. Life in Maramures certainly seems to run at a different pace to what we’re used to. No one rushes, no one hurries and everyone has time for a chat with their neighbours. No doubt the villagers here have their hardships and life is pretty basic from what we’ve seen, but it’s also nice to see people so happy with so little.

Shane preparing to enjoy our simple, but scenic, picnic.

After lunch we continued on to the village of Barsana where Nikolai took us through one the region’s oldest, traditional wooden churches. Built in the 17th century, the church was representative of the local style; it was an amazing work of art and all of it was wooden – from the tall pointed tower to the interior and even the shingled roof. Here Nikolai told us a bit about the Romanian Orthodox faith and how it differs from Greek Orthodox and Russian Orthodox. It was interesting to hear about the struggles Romanians went through to keep their religion alive through the years of Turkish occupation (1541-1699), Austrian occupation (1699-1848) and Communism (1947-1989); and also to find out about some of the superstitions that the Romanians in Maramures cling to and weave into their religious practices. 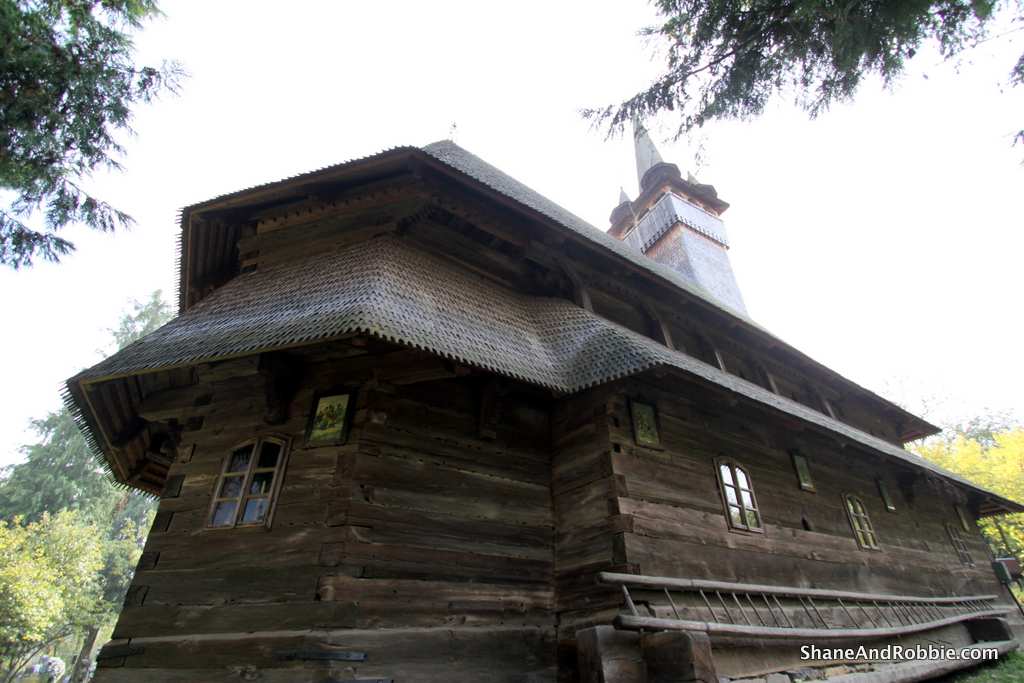 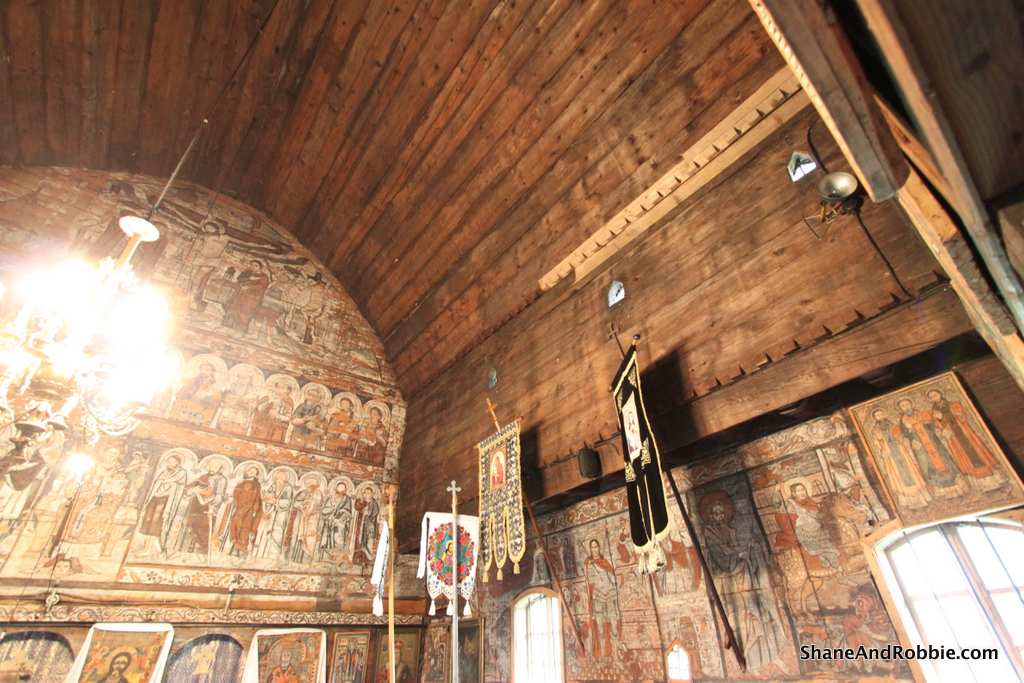 The painted interior of the wooden church.

Our final stop for the day was the convent at Barsana. Home to just 12 nuns now the convent sits atop a high hill, overlooking the best view in Maramures I think. The entire convent was built with donations form the local villagers which is amazing because these villagers seem pretty poor, and yet they obviously gave very generously to help build the convent. I guess it demonstrates how important their faith is to them. For us it was a lovely spot to end our day of sightseeing as it was so peaceful and we got to walk through the grounds and soak in some of the serenity before heading back to Vadu Izei for a warm, wholesome meal of traditional Romanian fare (i.e. meat, potatoes and cabbage).

The peaceful and serene convent at Barsana.

The church on the convent grounds is builtin the unique Maramures style.

There is every indication that there are more and more changes in the wind for Maramures with a German mining company recently being granted the rights to reopen a nearby mine, and more and more tourists discovering this hidden piece of authentic Romania. We feel quite blessed to have been able to see Maramures whilst it was still relatively unspoilt and to have met some of the local craftsmen and women who still work in traditional ways. It will be interesting to see how long the Romanians of this region continue to practice their traditional ways of life, and how they protect their unique heritage from the inevitable changes wrought by progress and modernity.

We are lucky to have seen this corner of the world before it becomes too touristy and loses some of its rustic charm.