Birthplace of a legend

Sighișoara is a small town on the Târnava Mare River in Transylvania, Romania. It’s a rather picturesque, well preserved medieval town that has been put on the tourist map by the fact that the infamous Vlad Dracula (aka: Vlad the Impaler, Vlad Țepeș or Vlad III, Prince of Wallachia) was born here. Not that there’s anything very “Dracula-ish” about the town, except for perhaps the tacky souveniers for sale at every little stall. Still, it’s a very pretty town, as we discovered this afternoon. 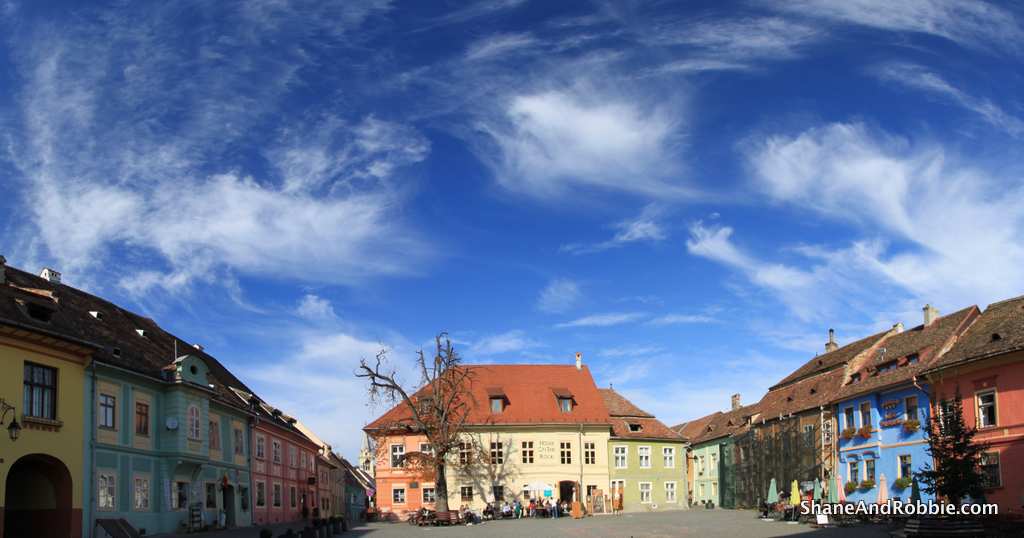 We arrived in Sighișoara this afternoon after a 6 hour bus journey designed to realigned vertebrae and shatter brittle bones (the roads here are sooooo bad we averaged about 50km/h for the trip, which is why it took us 6 hours to travel 260km!). The scenery along the way was all rolling hills and tiny villages, with a few traffic jams caused by such varied obstacles as a horse and cart on the road, cows meandering across the tarmac and even an errent donkey loose on the street. Gotta love this place!

Our views during the 6 hour bus journey this morning: the Romanian countryside and wilderness.

Sighișoara is part of Transylavania, that most famous part of Romania immortalised in Bram Stoker’s 19th century novel, Dracula. The town was settled originally by the Romans and then, during the 12th century, German craftsmen and merchants were invited to Transylvania by the King of Hungary* to settle and defend the frontier of his realm. Over the years the town was conquered first by the Turks then by the Austrians, though the distinctly German influences remained. When Communism took hold in Romania in 1947 most of the descendents of those original German settlers migrated to Germany and today Sighișoara is home mainly to Romanians and some Roma people.

*Transylvania was actually part of Hungary for more than 1,000 years and only became part of Romania in the 19th century – so Vlad Dracula was technicaly Hungarian not Romanian!

Enjoying the autumn sunshine whilst wandering the streets of Sighisoara. 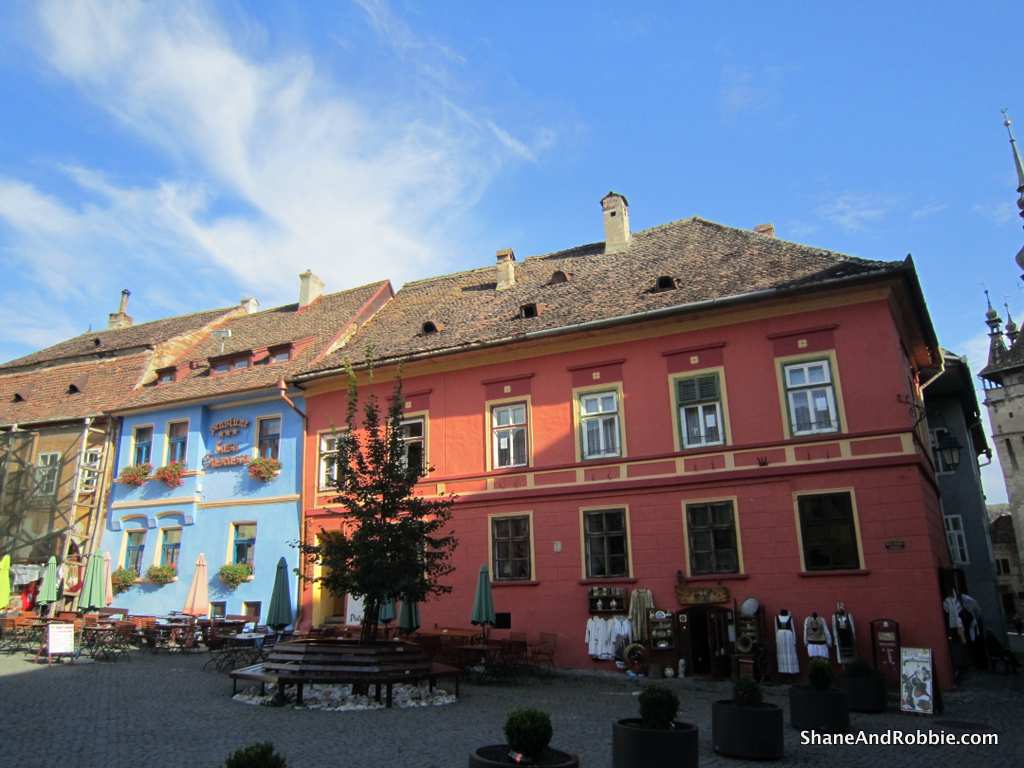 Many of the houses in Sighișoara are more than 600 years old and were originally built by the German settlers who came here at the invitation of the Hungarian king (he invited them to settle on the fringers of his kingdom to protect Hungary from the Turks).

Due to the majority of the population of Sighișoara originally being German the main church in town is a Lutheran church. Positioned high up on the hill behind the town, the church provided us with a great vantage point from which to view the town and surrounding landscape. 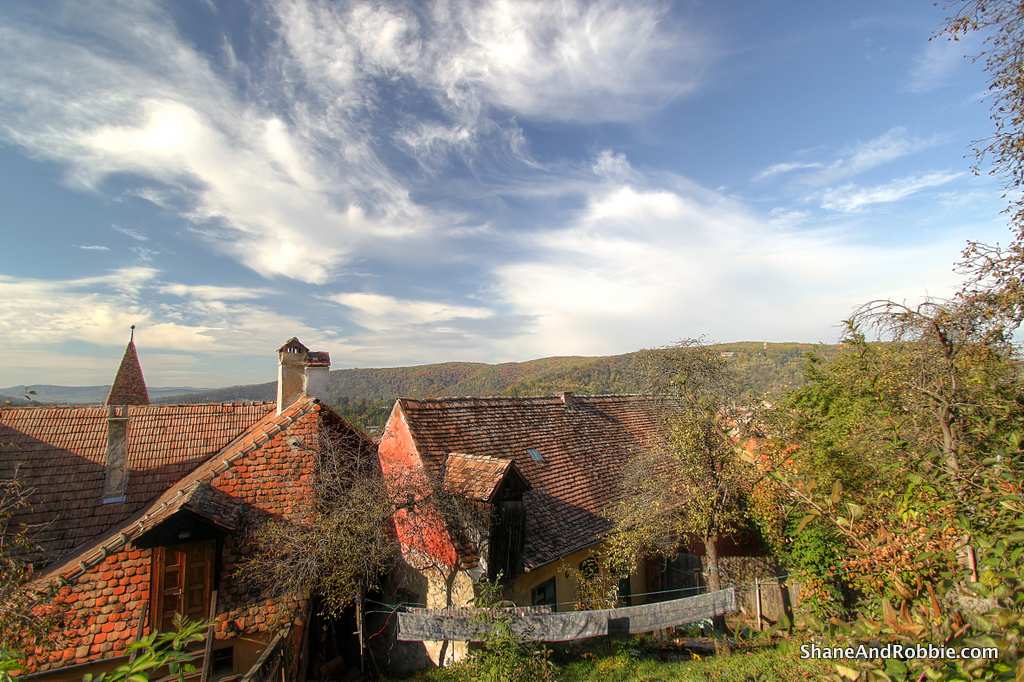 Views from the Lutheran church up on the hill over Sighisoara’s old town.

Views back over the other side of the hill towards the newer part of Sighișoara.

Behind the German Lutheran church there is also the town’s old German cemetery. It was interesting wandering through the graveyard, reading the tombstones and just enjoying the peace and serenity of the warm autumn afternoon.

Entry into the Lutheran cemetery behind the church.

The very serene and peaceful Lutheran cemetery of Sighișoara.

Walking around the town walls (which are still standing after 800 years), we came across the Clock Tower, once the main gate into the town. The tower now houses a medieval weaponry and torture museum which we skipped in favour of more wandering through the cobbled streets.

The Clock Tower was once the main entry into the old town. 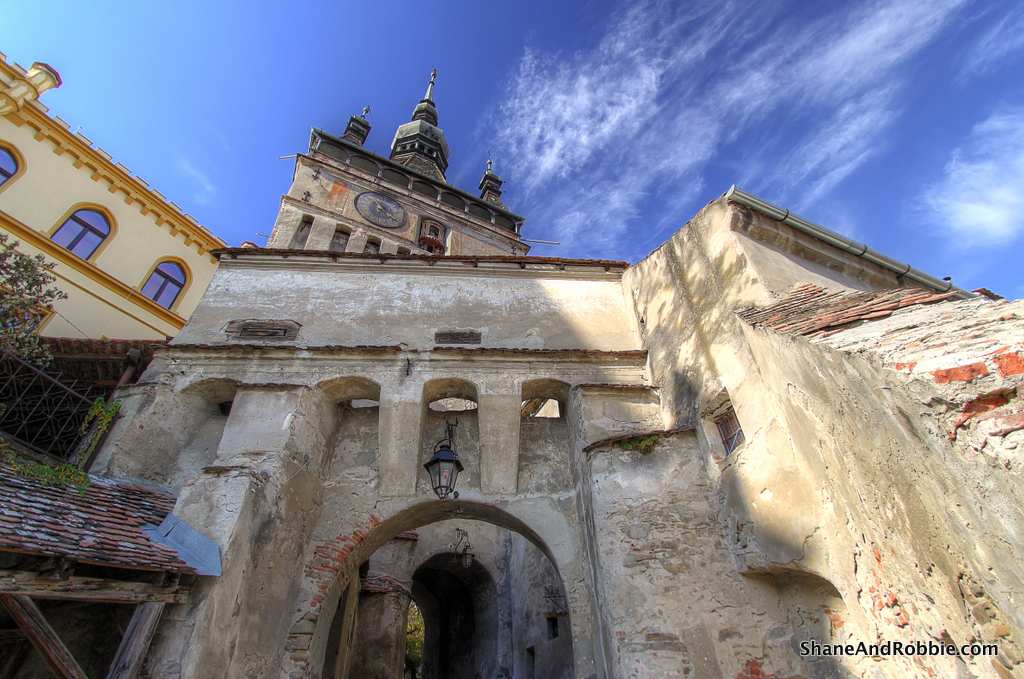 The old town walls of Sighișoara were built in the 13th century and are (mostly) still standing. That’s German engineering for you!

The Clock Tower as seen from the Town’s central square.

In a corner of the town there is a bronze bust of the Wallachian prince Vlad Dracula, whose parents lived in exile in the town for a few years (hence Vlad Dracula was born here in 1431). Vlad only lived here until the age of 4 though, so the town can only really lay tenuous claim to the Dracula myth, but it obviously keeps tourists flocking to the town so who can blame them for exploiting that link! 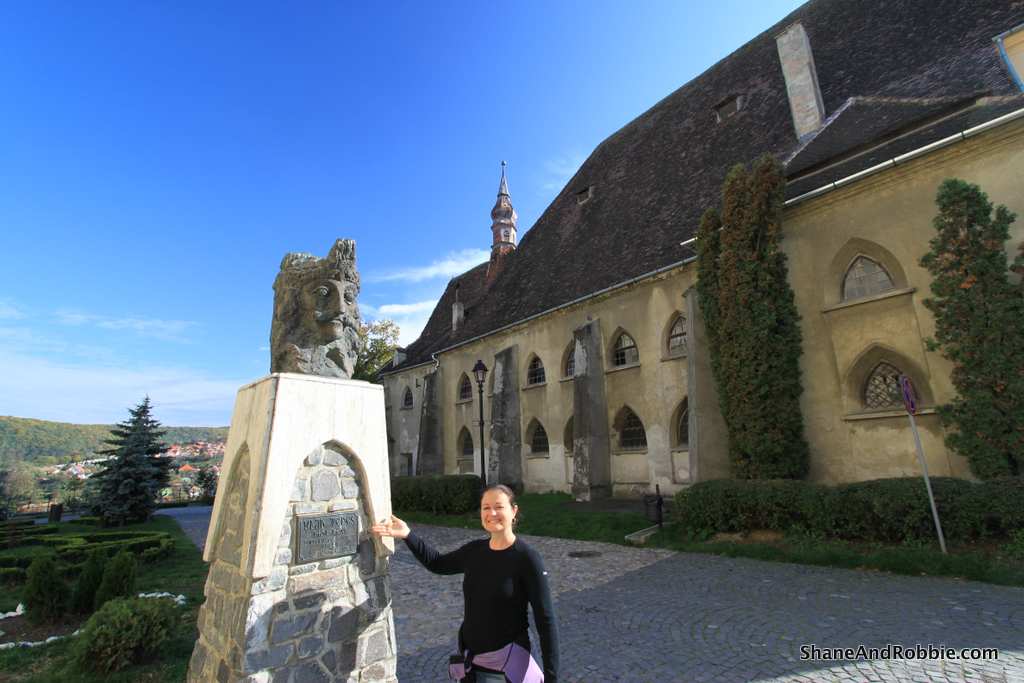 Checking out the streets Vlad would have played in as a young child.

We’re not mad Dracula fans, but even we couldn’t resist the urge to have dinner at the restaurant now established in the house where Vlad was supposedly born. The restaurant itself was not very Dracula-ish at all (i.e. the waiters weren’t dressed up in capes or fake vampire teeth), though the food was great (think potatoes, meaty stews and lots of cabbage). After dinner we had a lovely evening walking around the town, enjoying the peace and quiet of the evening.

Dracula’s Birth House Restaurant. So cheesy we had to do it!

We’re looking forward to a good night’s sleep now as tomorrow we’re on the move again, this time to the tiny rural village of Viscri about an hour’s drive away. We’re staying with host families in Viscri (i.e. home stays), so it should be a rather interesting day! We’ll let you know how THAT goes in a couple of days when we have internet again…