DAY 133: A TASTE & A WHIFF OF THE ROMANIAN COUNTRYSIDE IN VISCRI

Two cream puffs outside of their natural habitat… 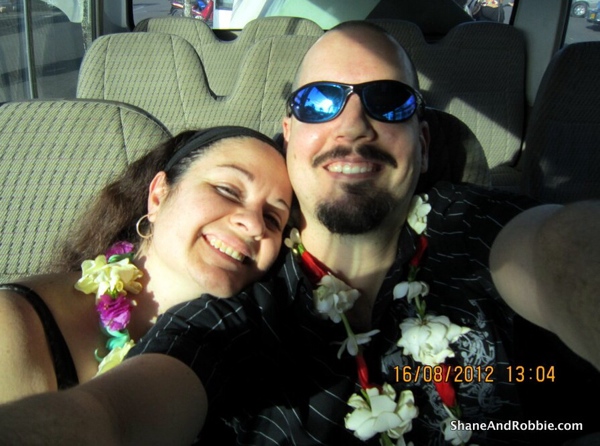 And here are the above-mentioned cream puffs in their natural habitat:

Cream puffs in their natural habitat (i.e. the city, the 5 star resort).

Whereas this is NOT the natural habitat of a cream puff:

NOT the natural habitat of a cream puff.

How rustic was our day? THIS rustic:

The most exciting thing that happens in Viscri every day is when the cows come home after spending the day in the fields. Pretty rustic.

We left the relatively civilised confines of Sighișoara’s medieval town walls this morning and drove about an hour into the hills to the tiny village of Viscri. Viscri may be just an hour from the nearest town but it seems that we are in a different world. A world where chickens, ducks, geese, turkeys, pea hens, horses, cows, dogs and cats roam the streets, and the most exciting thing that happens each day is when the cows come home. A world where the air is rich in farmyard aromas, so rich it made our eyes water. We are are well and truly out of our element here! 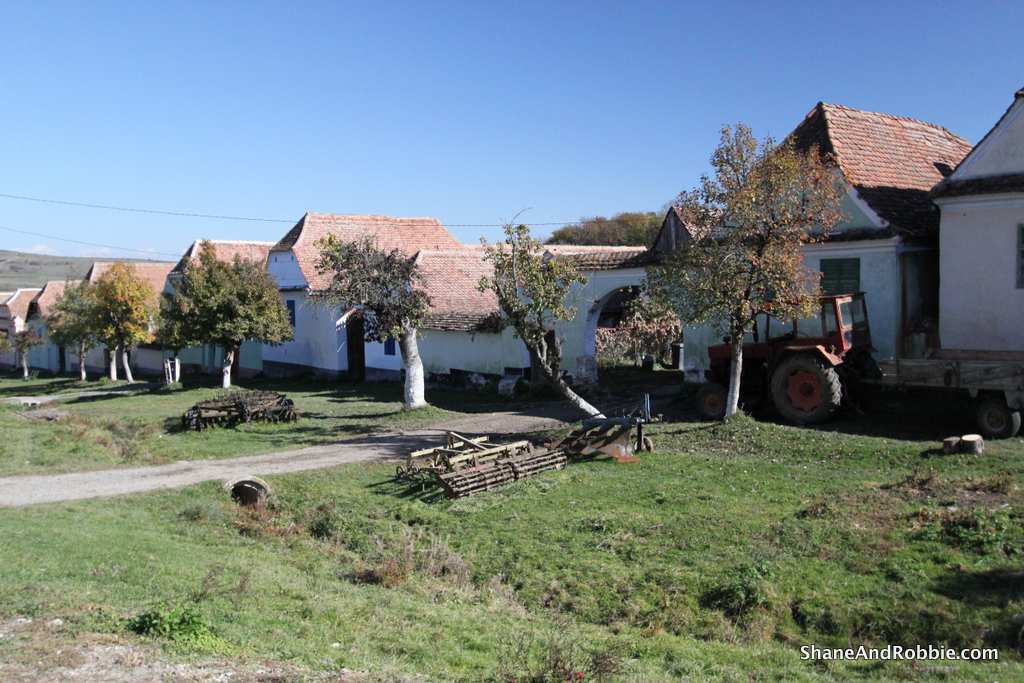 The German settlers who came here 900 years ago built their houses in the traditional Saxon style. The villagers have continued this traditional building style.

Viscri is a small German-Romanian village originally settled in the 12th century by Germans invited here by the Hungarian king (as I mentioned yesterday, Transylvania used to be part of Hungary). It is one of about 30 such UNESCO World Heritage listed villages in this region and is like a slice of living history. Most of the villagers here live a very basic life, growing their own food and keeping cows, sheep and birds for milk, eggs and meat.

There are just a handful of German-speaking descendants left from the original 13 families that settled in the village from Saxony in Germany 800 years ago, and many of the houses are empty and in disrepair. A small number of houses, however, have been lovingly restored in the traditional style of the area and are still inhabited by the remaining German-Romanians. Our tour group has essentially been billeted out to these families, with each house accommodating a couple of us. It’s a good way to get close to the locals, but it’s a little awkward as they speak no English (only German and Romanian), and we speak tourist-level, crap German at best. Still, Shane and I scored with our home stay as we have a separate little entry into our room and we have our own ensuite bathroom – much easier than having to share the bathroom with the host family!

The house we’re sharing with our German-Romanian host family.

Our room for the night: simple but clean and comforable.

We’re actually very grateful to the host family (who, by the way, get recompensed quite generously for their hospitality), as our room is lovely – very clean and comfortable. The only small issues we’ve encountered in our lodgings is that THERE IS NO HOT WATER!  The only way to heat water up is with fire; the lady of the house had to come and light a fire under the water tank in our bathroom to warm some of the water up for us so we could have a shower this evening. Very rustic indeed!

*Note: I just wanted to put in a bit of a disclaimer here: we’re not really THAT precious. We know millions of people around the world live in conditions like this, and much worse. It’s just a bit of a shock for us as we expected Romania, as a European country, to be a bit more modernised. These are the sorts of conditions we would expect out in the bush in Africa or in rural South America, not in Europe! Still, it is most certainly making this leg of the trip a unique experience, and we wanted to see Romania to learn a bit more about its history and culture!

The hot water system in the bathroom. Fire and wood in the bottom bit, hot water in the top bit. A bit primitive but it works so we are not complaining!

After we’d all been billeted out and had settled in, we were taken on a bit of a tour around the village by, Walter, the only German-Romanian gentleman in town who speaks English. He took us down the street (note the singular) traditionally inhabited by German-Romanians, pointing out the unique architectural features of the houses and explaining how the community was organised to help ensure the survival and prosperity of all members. In typical German fashion things seem to be very well organised, with the villagers sharing farming duties and many things working on a shared roster basis. The sense of community is still very strong in the village, even between the German-Romanians and the Roma-Romanians who live in their own village down the road. 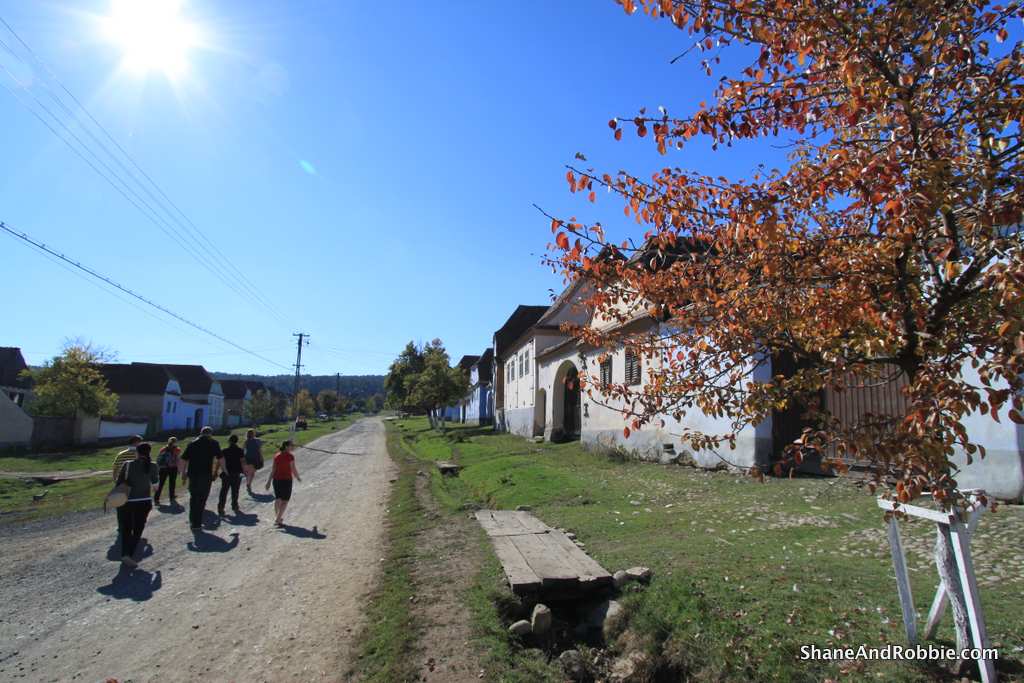 We take a walking tour of Viscri.

How most people seem to travel around town in Viscri.

This place is very picturesque, if a little rural for us.

Walter also took us to see the fortified church that sits at the centre of the town, atop a hill. Characteristic of these villages, the church is built within the confines of a fortified wall, effectively functioning as both a defensive fortress and a place of worship and communal gathering for the people of Viscri. These fortified churches were essential to the survival of these villages as, when they were first settled, they were right on the fringes of the Hungarian Kingdom and were often attacked by  the Turks, the Mongols, the Tatars and other marauders. 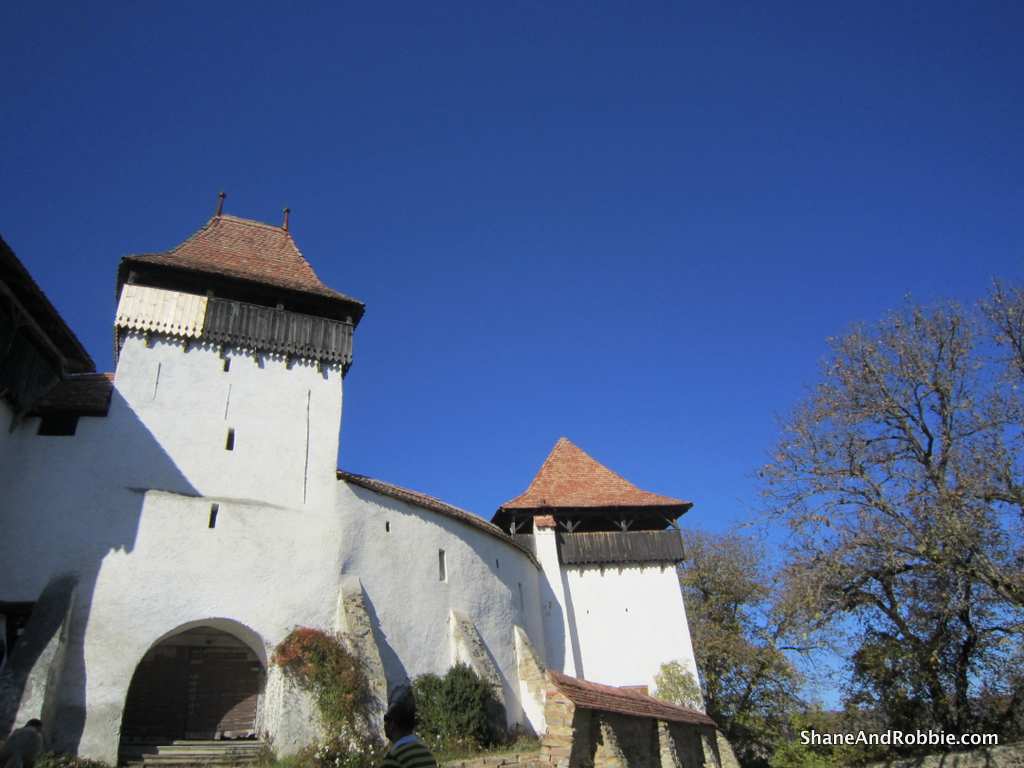 The fortified church of Viscri.

The church was surrounded by fortified walls and protective watch towers.

Views over the village from one of the watch towers.

Within the church grounds there is also a museum that houses a few items designed to showcase how the German-Romanians of the area lived centuries ago. Looking at how basic life for them must have been made us respect those early settlers all the more! It was interesting to learn that the village only got electricity in the 1990s and running (cold) water in 2001, so really life was pretty basic up until quite recently. 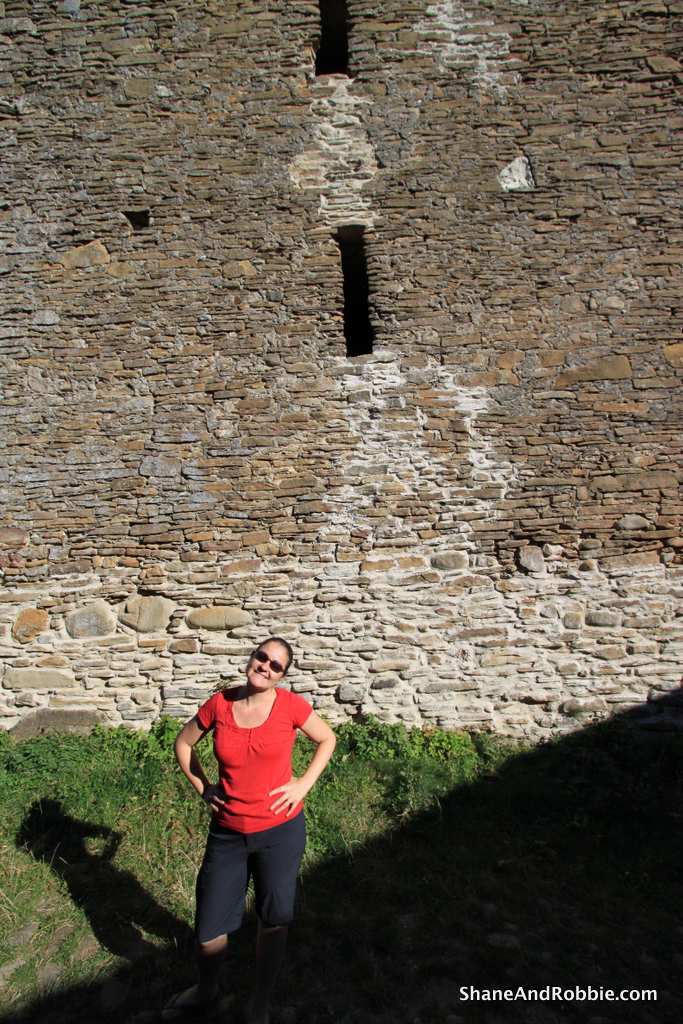 Wandering around the grounds of the fortified church.

Our final stop on the walking tour of Viscri was into the Roma-Romanian part of the village were a blacksmith still plies his trade, making shoes for the village’s horses, and where the old women sit in front of their houses spinning yarn and knitting. In an effort to make some extra money many of the women sell the socks, jumpers and beanies they knit; the wool is lovely and soft and Shane got sweet-talked by one grandma into buying a beanie. Definitely a unique souvenir!

The Roma (i.e. gypsy) villagers live in much more basic conditions than the German-Romanians. The 2 groups keep pretty much to themselves, though they are on friendly terms and trade between themselves.

We’re having dinner tonight all together at Walter’s house and then tomorrow we’re off again, this time to the city of Brasov. It’s been an interesting day, seeing how the villagers of Viscri live and how they’re fighting to keep their traditional way of life alive in the face of modernity. So many of the villagers have left (and continue to leave) however, that we wonder how long before the history and traditions of the German-Romanians are lost forever. Mind you there are a lot of people supporting these communities in their efforts to rebuild their houses and develop a bit of a tourist trade, so maybe it will continue, just in a slightly altered form. Whatever happens, we feel lucky to have been able to see the village of Viscri and experience something of life here. 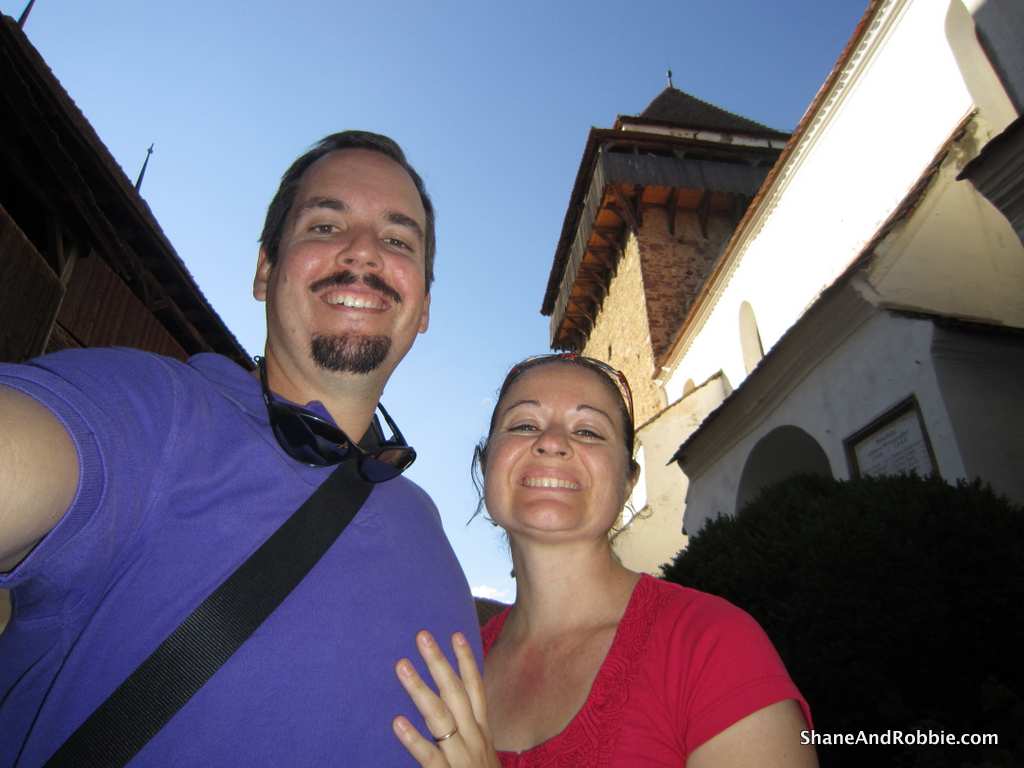 Feeling lucky to be here – though we will be glad to get back to civilisation tomorrow!