We flew out of Turkey today and arrived in Cairo, Egypt. Land of pyramids, sphinxes (ok, just one) and ancient temples; of deserts, oases and the life-giving River Nile. We’ve wanted to visit Egypt for years and it is so exciting actually being here now!

THAT’S how we know we’re in Egypt!

Ataturk International Airport in Istanbul was insanely busy so it was with some relief that we boarded our plane. By contrast, Cairo International Airport was very, very quiet. With the recent civil unrest, the number of tourists visiting Egypt has (understandably) dropped off significantly. Tourism is Egypt’s major source of revenue and we learnt today that the lack of visitors is having a serious impact on the country’s economy. Understandably, therefore, the Egyptian government is doing all it can (including installing live, streaming webcams in some of the major tourist destinations) to show people that things have settled down here and that Egypt is once again “open for business”. We’re not naive enough to think everything here is 100% “normal”, but we’ve been assured things are relatively stable. Additionally, we’re seeing Egypt as part of a tour group and we trust the company we’re booked with (Intrepid – again), to take care of us. So far so good – arriving in Cairo was a bit of a culture shock, but nothing more.

Beyond the city limits it’s just an ocean of sand.

With 20 million inhabitants it’s no wonder the city seems to go on forever. We saw lots of apartment buildings like these, a few free-standing (no doubt very expensive) homes and a whole lot of shacks. 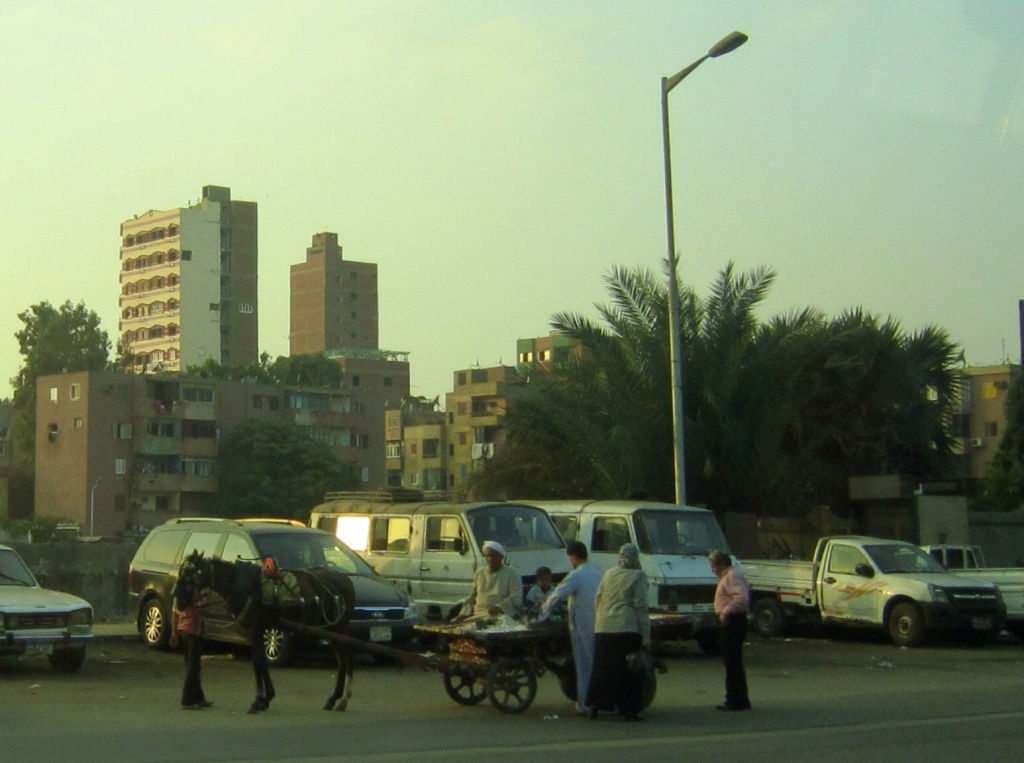 Arabic script everywhere, horses and donkeys on the roads, mosques on every corner – that’s what you come to Egypt to see right?!

Our first sight of Cairo was from the airplane window and it was amazing – all we could see was an ocean of sand and then a vast city of sandstone and ash coloured buildings, stretching as far as we could see. Cairo is HUGE! It’s also hot, noisy, dirty, dusty, chaotic and very hazy. When we landed this afternoon, the haze was so thick that the sun was barely visible; it made for some interesting lighting as we drove through town from the airport to our hotel in Giza. 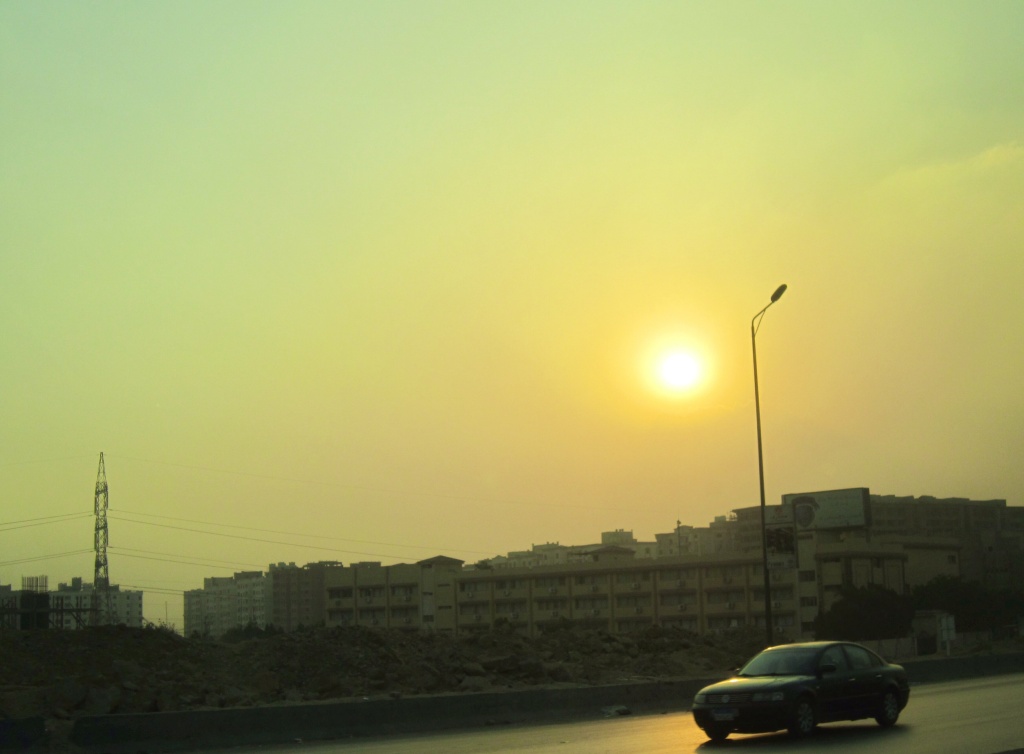 That’s the sun at 4:30 this afternoon – barely visible through the haze.

Giza is across the Nile from the main centre of Cairo and is nice and close to the famous pyramids. We’re staying in a nice hotel here for a few days, during which time we plan to explore some of Cairo’s most famous sites – including the pyramids down the road, the Great Sphinx, and the amazing Museum of Egyptian Antiquities. Our hotel was like an oasis of peace and quiet after the chaos of Cairo traffic!

First impressions of our hotel from the lobby: not bad! 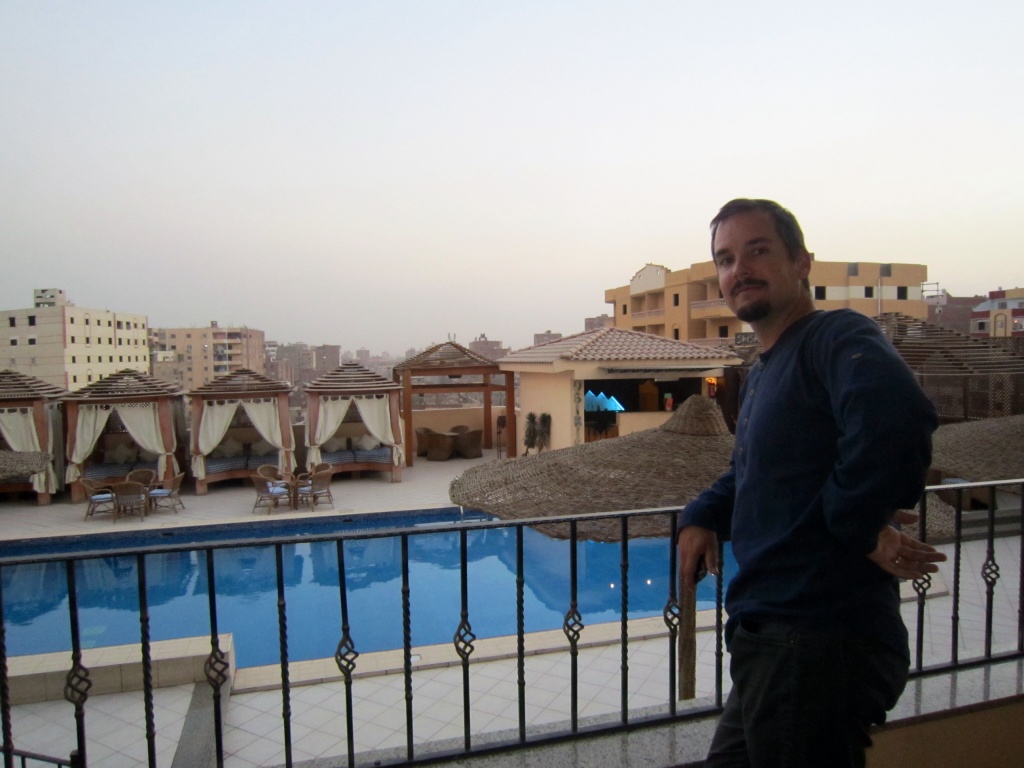 The roof top pool could be just the thing for recovering after a hard day of touristing in Cairo.

Travel days tend to be rather dull and uneventful (if all goes well), so we really have nothing to report except we made it and, as of tomorrow, we’re going to start exploring Egypt!