Today was our first full day in Egypt and we wanted to start our Egyptian adventure by exploring a couple of the oldest archaeological sites in the country: Memphis and Saqqara. We hired a driver and a wonderful English-speaking, university-educated local guide for the day (for just $120AUD!), and set out early this morning to see the first imperial capital of Egypt (Memphis) and its vast necropolis (Saqqara). 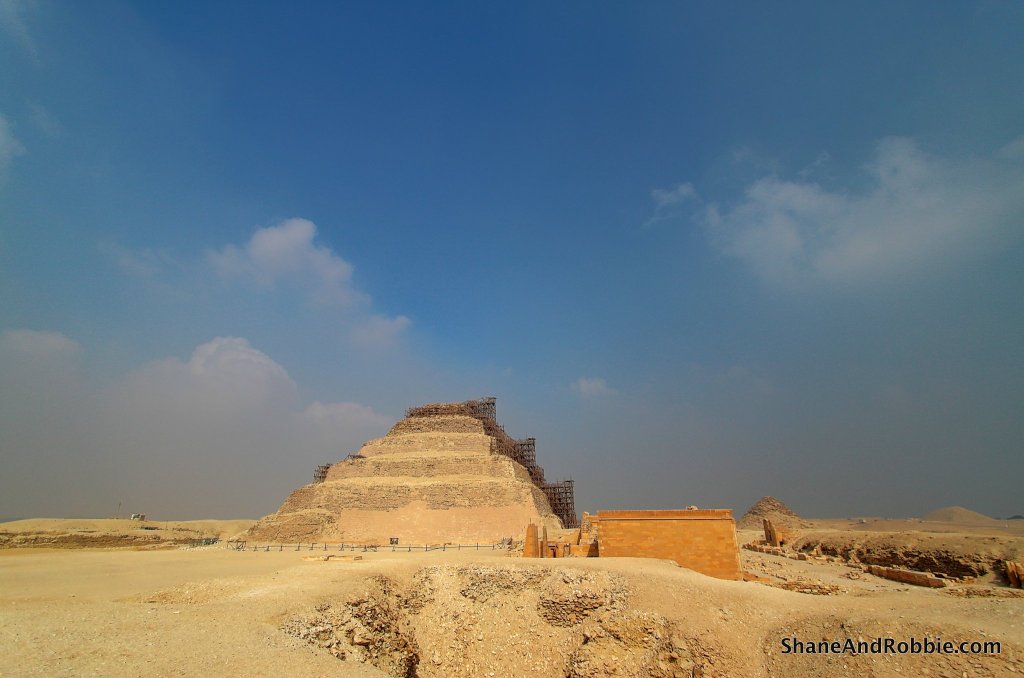 The Step Pyramid of Saqqara is the oldest pyramid in Egypt.

The drive out of Cairo to the nearby township of Saqqara was extraorindary – it was noisy, hectic, stinky and chaotic. We knew that Egypt would be a bit of a culture shock – we’ve been to Africa before and have seen the poverty, the filth and the lack of infrastructure that is characteristic of most developing nations. It was still a shock, however, being immersed in it yesterday, on our way to the hotel from the airport, and today, on our way to and from Saqqara. The greatest shock was seeing how incredibly dirty Cairo is – there is rubbish piled high on the sides of the road in many places. One of the canals we passed (that was once used to irrigate crops with water from the Nile) was so clogged up with rubbish that there was barely any water flowing. Add to that a bit of heat, humidity and thousands of cars, all honking and veering madly around each other – plus a few thousand people, donkeys, horses and camels – and you have a great recipe for sensory overload!

Our first stop of the day were the ruins of Memphis – the first imperial capital of unified Egypt*. Built around 3100BC By King Menes, Memphis is only about 30km South of modern-day Cairo and easily reachable as part of a day trip.  The city was intentionally built right at the junction between Lower and Upper Egypt, ensuring the pharaohs were able to maintain equal control over both halves of the newly formed nation. The kings of Egypt ruled from Memphis for over 1000 years, though unfortunately little is left of the ancient city today – most of the ancient city believed to be below the mud and fields of modern-day Saqqara.

*Egypt was once 2 kingdoms – Upper Egypt close to the source of the Nile (i.e. in the Southern part of today’s Egypt) and Lower Egypt (i.e. the lands close to where the Nile empties into the Mediterranean, roughly from modern-day Cairo all the way North to the coast). The nation was united by the legendary King Menes around 3100BC.

Very little remains from the ancient Egyptian capital of Memphis.

What is left of Memphis dates from the 19th Dynasty* and partains to a temple built in honour of the pharaoh Ramsses II. The temple was built at Memphis because, despite nolonger being the Egyptian capital, this city remained the most important commercial and artistic centre in the country. Most fascinating for us was the broken, but still impressive, giant statue of Ramsses II (preserved under 30 feet of mud until last century) and the sphinx that once stood gaurd outside the temple gates. The best part was having the entire Memphis open-air museum to ourselves – there are so few tourists here at the moment!

*We discovered today that Egyptian history is divided into dynasties, starting from the 1st Dynasty when King Menes ruled over a united Egypt (around 3000BC), all the way through to the final dynasty: the 30th Dynasty of Cleopatra (which ended around 30BC).

This colossal statue of King Ramsses II once looked out from a temple built in his name.

Sphinxes, with their leonine bodies and human heads, were the protectors of temples and sacred sites.

From the open air museum at Memphis when went across to Saqqara, where we were once again the only people there. This site was once the vast, ancient burial ground which served as the necropolis for Memphis. Kings, queens, high priests and the elite of ancient Egyptian society were buried here, with the oldest tombs discovered dating right back to the 1st Dynasty, making them more than 5,000 years old. The oldest tombs at Saqqara are flat-topped, single level structures called mastabas. We got to crawl down into one of these ancient tombs and see some amazingly well preserved hieroglyphics. It was quite squeezy getting down there, but it was amazing in the actual burial chamber. There was no mummy and no treasure down there, however, as those have long since been looted and/or removed and placed in the nearby museum for safe keeping. 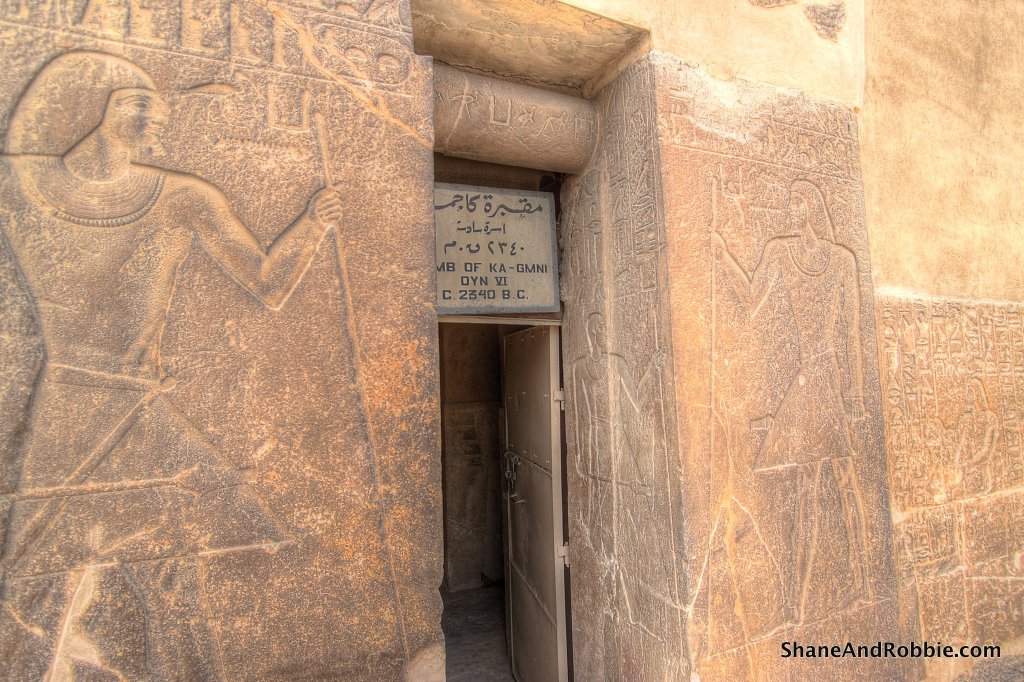 Crouching down to get into the burial chamber underneath one of the mustabas. Not for the claustrophic!

As well as the mastabas, Saqqara features numerous pyramids – including the world famous Step Pyramid of Zoser. Built around 2650BC during the 3rd Dynasty the Step Pyramid was the first pyramidal burial monument in Egypt and as such represents a significant leap forward in Egyptian architecture. Designed for King Zoser by the High Priest Imhotep, the Step Pyramid of Saqqara is iconic and was revered even by the ancient Egytpians themselves, with Imhotep becoming a God-like figure for later generations of Egyptians.

Like all Egyptian tombs, the Step Pyramid of Saqqara was built on the West side of the Nile (across the river from Memphis). To the ancient Egyptians, East was symbolic of birth as this is where the sun arose each morning, which is why they built their cities on the Eastern bank of the Nile, while tombs were always built along the West bank of the Nile – this is the direction the sun sets or “dies” at the end of each day.

The vast necropolis of King Zoser was once surrounded by a huge wall, with a single entry lined by columns. These columns were decorated with lotus flowers and papyrus reeds – the former symbolising Upper Egypt and the other latter the Lower Egyptian Kingdom. Some of the wall has been reconstructed and the remaining columns reinstalled in their former positions. As we walked through the very grand entry and in to the central part of King Zoser’s burial ground we were wading through slippery mountains of sand – it made for slow, hot going. Just the small amount of walking around Saqqare we did today gives us a new appreciation of the efforts required by archaeologists to sift through all the sand and uncover what the desert has hidden. 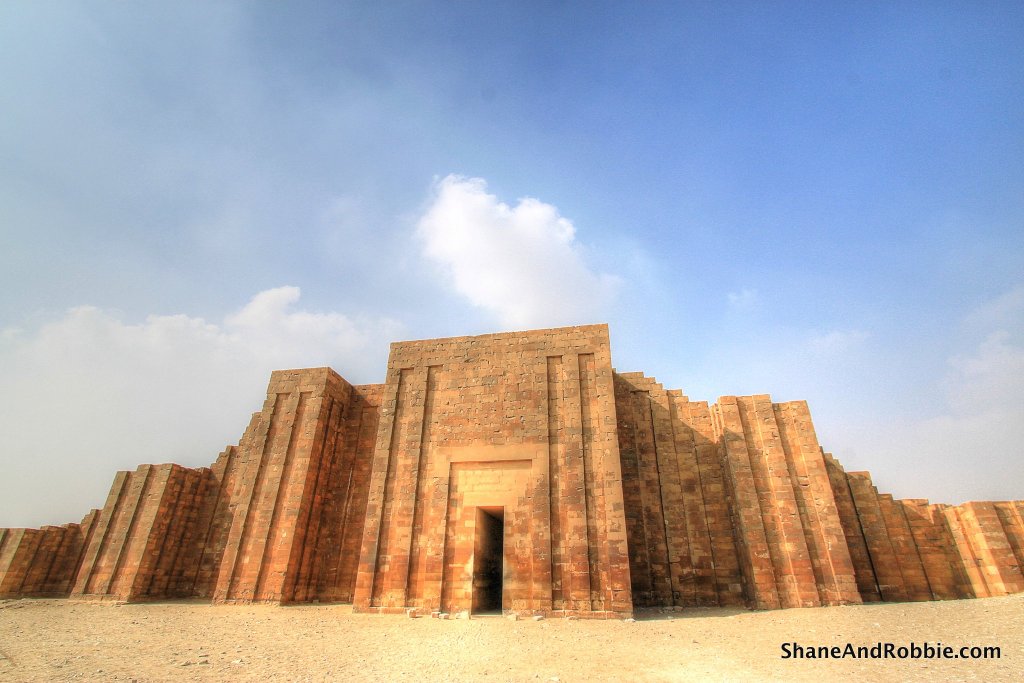 The reconstructed entry into King Zesos’s necropolis at Saqqara.

We also visited the Museum of Imhotep which is on-site at Saqqara and saw our very first mummy. It was sooooo cool! We could see all his fingernails and toenails – even his eyelids and lips were perfectly perserved. Unfortunately we couldn’t take any photos, but suffice to say it was fascinating. Amazing to think that even today we cannot reproduce the mummification process the Egyptians perfected – all attempts that have been made to mimic the process have failed to produce the same long-lasting effects. The museum also contained a number of artefacts rescued from the various tombs around Saqqara, including some amazingly delicate jewelry pieces, ornate carved statuettes and surgical instruments that once belonged to the court physician. To think the Egyptians had the technology to create such things of beauty and to do basic surgery, whilst most peoples of the world were still living in caves and scratching the fleas out of their armpit hair. Totally awesome!

From Saqqara we headed back into the chaos of Cairo proper and then back to our hotel. Today was a great introduction to Egypt and its history, as well as a good way to see a bit more of modern Cairo “in action”. One of the things that really struck us today was seeing how poor people are here. It’s one thing to understand intellectually that 40% of Egyptians live below the poverty line, it’s another to come face-to-face with the blatant disparity between “haves” and “have-nots”. Our guide told us that many Egyptians earn less than 400EGP (Egyptian Pounds) per month – that’s about $60AUD. Even accounting for cheaper living costs, that’s not a lot. We can see why many people here work 2-3 jobs and why baksheesh (translation = tips or small “bribes” designed to smooth things over) are so important for people’s livelihoods.

You’re expected to tip everyone for everything here, though most of the time the tips are just a few Egyptian Pounds. We knew this coming in to Egypt and have absolutely no issue with the practice as we can see how vital these few extra Pounds are to people. We are also aware of how incredibly fortunate we are compared to most of the people here, and how can we resent tipping people a few cents (in Aussie terms) for the great service we’re receiving? So far all the locals we’ve encountered have been very friendly and helpful, and have earnt their tips as far as we’re concerned! I’m sure having an Arabic-speaking guide chaperoning us has helped, but we haven’t even felt overly harassed by touters or vendors trying to sell us camel rides, donkey rides, horse rides, books, post cards, souveniers or trinkets. A couple of firm, but polite, “No thank you’s” and they’ve left us alone. Most people just seem so grateful to be seeing tourists, even if it’s just 2 of us, back in town.

What a day! So far we can attest that, yes, Egypt is intense. Yes, it’s a real culture shock being sensorily assaulted by the noise, sights and smells of Cairo. But it’s also absolutely amazing being here and seeing the remnants of a civlisation this ancient. We’re hopeful that the rest of our time here will be as interesting as today!