DAY 165: ALL THE WAY DOWN TO ALEXANDRIA

We drove all the way down* to to Alexandia today to see what’s become of the learned, cosmopolitan city of yore. The city was once a beacon of enlightenment in the ancient world, with its famous library and lighthouse. As we discovered today, however, there is little left from those days. Modern Alex, as Egyptians call this city, is noisy, dirty, crowded and chaotic, with few historical ruins of note. The salty waters of of the Mediterranean and muds of the Nile Delta have long since buried and/or destroyed the remnants of ancient Alexandria – city of power and knowledge. Today we got to see some of what is left, including the catacombs of Kom es-Shoqqafa, the Roman amphitheatre and the waterfront corniche.

*We’re used to thinking of North as “up” and South as “down”, but in Egypt all things flow according to the Nile which means Upper Egypt is in the South and here in Alexandria, on the Mediteranean coast, we’re all way the down in Lower Egypt.

With a population of 6.5 million, Alexandria is Egypt’s second largest city, the hub of its oil industry and it’s largest sea-port. It’s also the most popular summer holiday destinations for residents of Cairo. At this time of year though, things are a little quieter.

Located at the mouth of the Nile, where the river empties into the Mediteranean Sea, Alexandria was the capital of Egypt for almost 1,000 years – from 332BC to 642AD (when the Arabs conquered Egypt). Named after Alexander the Great, who wrested Egypt from Persian control in 332BC, the site was chosen due to its strategic location close to sea – with easy access to Alexander’s homeland of Macedonia and other Mediterranean nations. With this change in capital and rulership, the Greco-Roman chapter of Egyptian history began.

When Alexander died without heirs, his vast kingdom was divided amongst his generals; Egypt went to Ptolemy I. And so the Ptolemic dynasty began. It was during this era that Alexandria became a great centre of learning and knowledge, with the Great Library of Alexander built in 305BC. When Cleopatra, last of the Ptolemies, committed suicide in 30BC, the city, along with the rest of Egypt, passed into Roman hands. From there began the steady decline of this once great city, with many of the once-great buildings falling to ruin, earthquakes destroying the lighthouse of Alexandria and the Great Library burnt down by early Christians in 300AD due to its vast repository of “pagan knowledge”. Add to that litany of disasters the corrosive effects of salt water, rain, river mud and neglect, and that’s why there’s so little left to see in modern-day Alexandria. Still, being such avid fans of learning and the like, we wanted to at least wanted to see where the Great Library of Alexander once stood. So off we set, at 7:00am this morning, to Alexandria….

The drive from Cairo to Alexandria by minibus this morning was insanity – we thought the drivers in Eastern Europe and Turkey were bad… Ha! Egyptian drivers are masters of chaos! Weaving in and out of traffic and 140km/h is mandatory it seems and no one sticks to just one lane – even when there are no cars around them, they seem to prefer driving across 2 lanes. We saw heaps of people driving with their hazards on – perhaps they think this excuses all sorts of hazardous behaviour?! The actual road between Cairo and Alexandria is great, it’s just the odd surprise SPEED BUMP that catches you off gaurd. Seriously – everyone’s speeding along at 140km/h and then bang, out of nowhere, a set of speed bumps. What the hell Egypt?! Realistically driving in Egypt seems to be nothing like what we know of as “driving”; it’s more like a game of dodge-’ems, just with real cars, trucks, buses and the odd donkey or horse-drawn cart thrown in for good measure. No wonder the Egyptians punctuate most of their sentences with inshallah (translation = God willing) – only divine intervention can explain how most of them survive on the roads!

Driving past lush farms on the way to Alexandria.

The scenery en route to Alexandria was interesting enough – lots of farms, lush and green thanks to water diverted into canals from the Nile and pigeon poo. Seems pigeon poo is the secret to making the desert bloom. Most of the farms along the way had 1 or 2 pigeon towers to house their birds. Seems like a fairly good symbiotic arrangement: the farmers feed the pigeons and provide them with shelter for nesting, and the pigeons in return provide them with kilos and kilos of nitrogen-rich poo for their vegetable fields. All sounds great until you find out the farmers also EAT the pigeons*!

*Turns out roast pigeon is a very popular dish here in Egypt – we’ve yet to try it but are keen to eat as many of those stupid birds as we can. We HATE pigeons; they’re the rats of the air and serve no useful function (except for the poo for the fields thing maybe). Shane’s been shat on by pigeons a couple of times during our travels around Europe (not sure why, but the birds do seem to target him), so he is particuarly keen to get his own back on the pigeon kingdom!

The large tower in the front ofthe farm house is for pigeons. Pigeon poo & Nile water – that’s how you get the desert to bloom!

We reached Alexandria around lunch time and, after a wonderful seafood meal at the fish market, headed out for an afternoon of sightseeing – starting first and foremost with the Catacombs of Kom es-Shoqqafa. This underground necropolis contains numerous tombs decorated by sculptures and reliefs that eclectically mix pharaonic, Greek and Roman imagery. The catacombs are believed to have once been the burial grounds for a noble family, with over 300 tombs discovered in the underground complex. It was really interesting seeing how the “new” Greco-Roman rulers of Egypt adopted some of the imagery and ritual from the ancient pharaohs and combined it with their own. 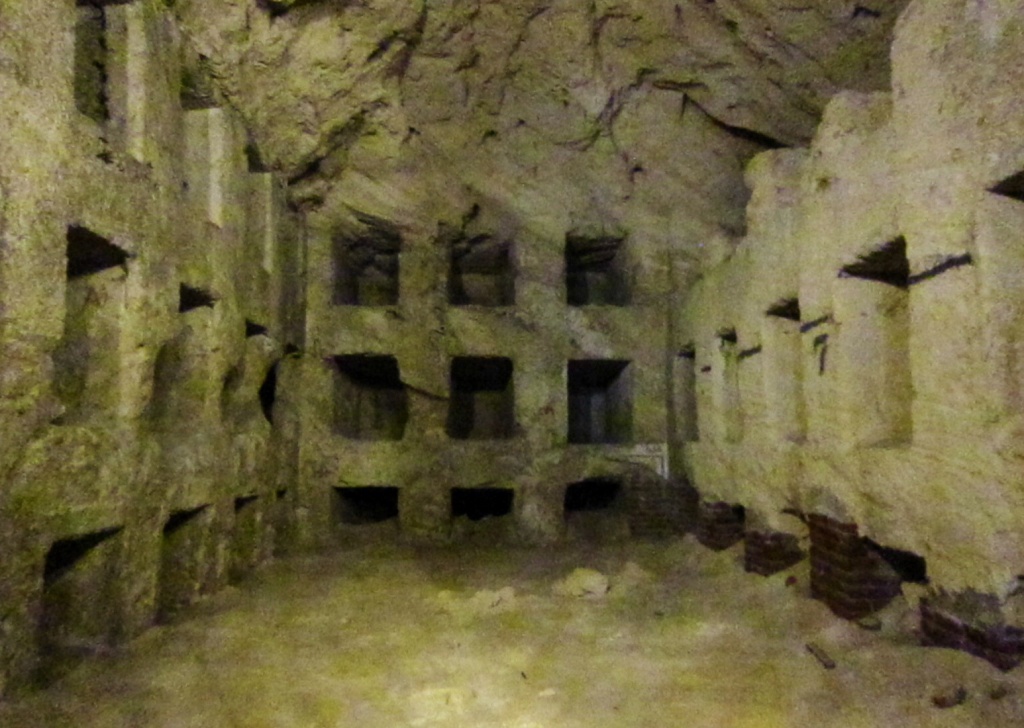 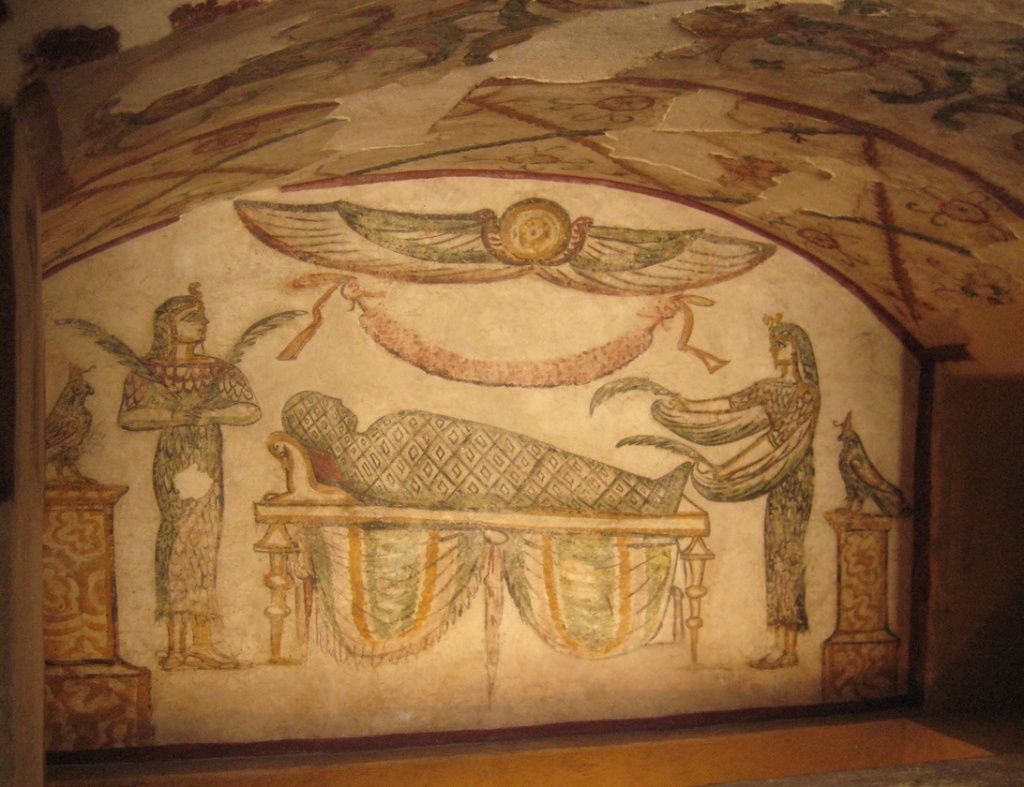 The decorations and reliefs within the Catacombs of Kom es-Shoqqafa combine pharaonic Egyptian symbols with Greco-Roman images, creating an interesting fusion.

From the Catacombs of Kom es-Shoqqafa we made a quick stop at the Roman amphitheatre, and then went on to the corniche for a late afternoon walk along the waterfont. The corniche of Alexandria is basically the paved esplanade that runs along the sea-front for 21km. It was great seeing families strolling along, kids annoying their parents for fairy floss (ahhh pester power – some things really are universal aren’t they?!), and young couples enjoying the cool afternoon sea breeze and flirting (very discretely – this is an Islamic country after all).

The Roman amphitheatre of Alexandria was built to accommodate just 700-800 people, reflecting the city’s much diminished size and importance during Roman times. 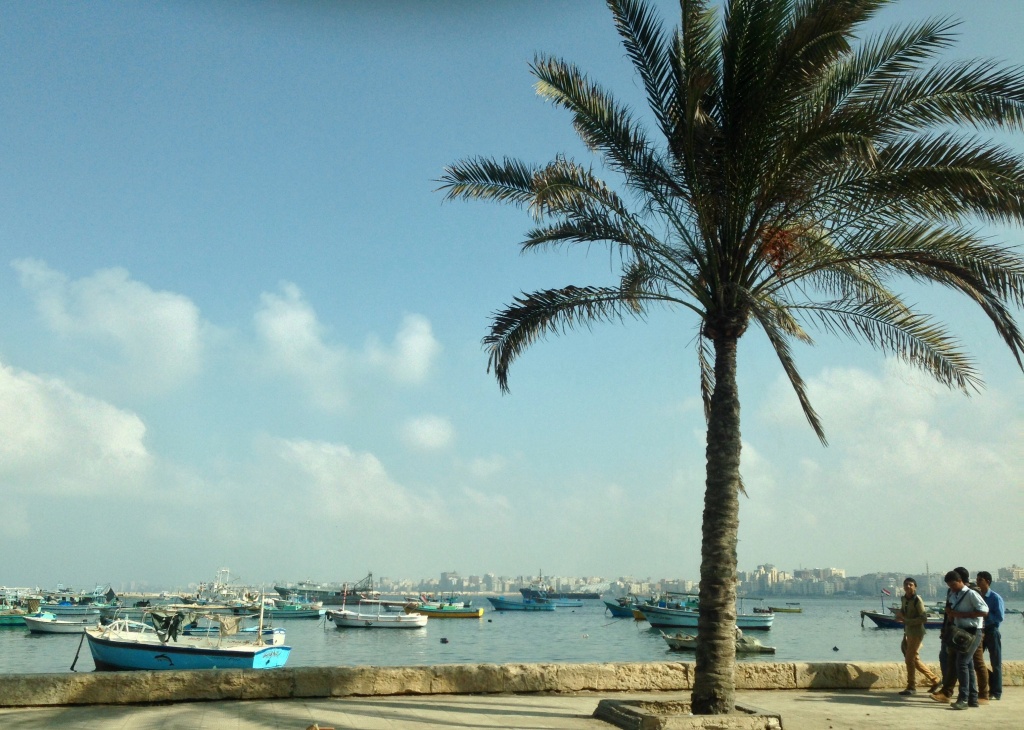 Views from along the Alexandrian corniche.

We walked all the way around to Fort Qaitbey, the reconstructed defensive fortress originally built in 1480, during the Ottoman rule of Egypt. We didn’t go into the fortress but did sit on the sea wall and enjoy the view across the Mediterranean. We watched divers returning from their explorations of the under-water ruins of the Lighthouse of Alexandria and fishermen returning after their day’s work – by the time the sun was beginnign to set there were hundreds of multicoloured little fishing boats bobbing around in the harbour. A nice way to end our first day in Alex – tomorrow we continue our explorations with a visit to the NEW Blibliotheque Alexandria!

The beautiful blue waters of the Mediterranean.

Watching the fishing boats returning to the harbour in Alexandria. 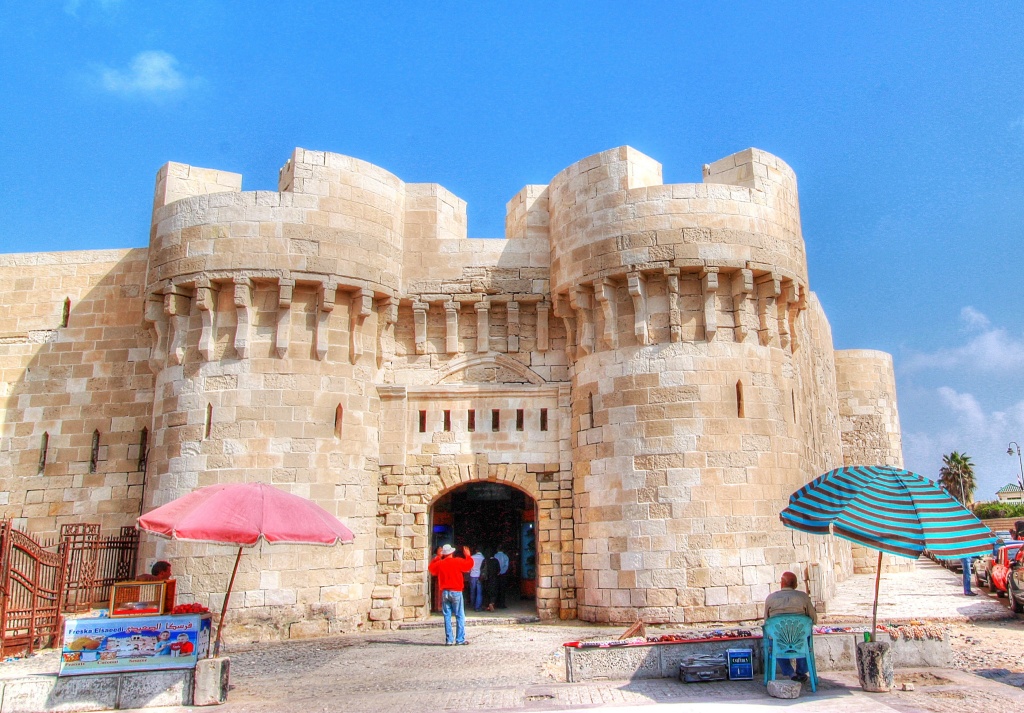