We went to see the Great Pyramids of Giza today! These majestic, timeless structures would have to be one of the world’s most instantly recognisable monuments; it was amazing actually being there today and being able to touch these 4,500 year old tombs. We totally understand why scholars, archaeologists, tourists and conspiracy-theory nuts have been obsessed with the pyramids for years – they are seriously impressive and awe-inspiring.

Built around 2500BC, when Egypt was one of the most technologically advanced, wealthy and powerful civilisations on the planet, the Pyramids of Giza were constructed as burial tombs for the ruling pharaohs of the 4th Dynasty*.  We learnt today that ancient Egyptians believed that when their king died, his spirit would be reborn in the after-life. To facilitate this rebith, his corpse was mummified, and everything the king would need in the after-life was buried with him, including gold, jewellery, food, furniture and other offerings. All of these things were buried within pyramids, with hieroglyphics inscribed throughout the tomb to help the reborn spirit make its way into the after-life. Today all of the treasures, sarcophagi and mummies from within the 128 pyramids found in Egypt have been removed – either by the Egyptian authorities to keep them safe or by thieves. Even without their treasures, however, the pyramids at Giza were amazing. They are just so big!

*The pyramids were strictly for members of the ruling family. Nobles, high priests and other high ranking people were also mummified and buried with their many treasures in elaborately decorated tombs, but their tombs were flat-topped mastabas, not pyramidal.

That is one big pyramid!

The Great Pyramids of Giza were built on a plateau on the West Bank of the Nile, not far from Memphis (the capital of Egypt at the time) and just a few kilometres out of modern Cairo. It took us almost 40 minutes to travel the short distance from our hotel to the necropolis of Giza this morning as negotiating the traffic was the usual busy, chaotic, noisy adventure it has been every day we’ve been here. What we saw when we arrived, however, rendered us speechless; those things are HUGE! And we were soooo lucky because the entire pyramid complex at Giza was basically empty. It was just us, our guide and the other Aussie couple who are doing this 12 day tour with us……, oh and about 1,000 local guys trying to sell us camel rides, donkey rides, horse rides, carved sphinxes, replica pyramids, papyrus covered in “real” hieroglyphics , and various other tacky souveneris made in China. It was so annoying havng these hawkers and touters harrass us every 30 seconds! We get that this is how they make a living, and when there’s only 10 tourists, not 10,000, visiting every day, their desperation is understandable. However, being repeatedly harrassed like that really ruined our ability to just sit and soak up the amazing vibe of the pyramids. Luckily our guide Amr had a few tricks up his sleeve and took us to a cople of spots where there were fewer hawkers and we could enjoy the view in peace (at least for a minute, until they spotted us and came galloping across the sand on their camels, donkeys and horses).

The oldest and largest of the three pyramids at Giza, known as the Pyramid of Cheops, is the only surviving structure out of the famed Seven Wonders of the Ancient World. It was built for the pharaoh Khufu (known as Cheops in Greek) and is the largest pyramid in the world (it’s base is 230m long and its original height was 147m*). Three small pyramids built for Khufu’s queens are lined up next to the Great Pyramid, and his tomb is surrounded by rows of mastabas, where relatives or officials of the king were buried to accompany and support him in the after-life.

*The 9m tall golden apex of the pyramid has long since been removed by thieves, so the pyramid is only 136m tall now 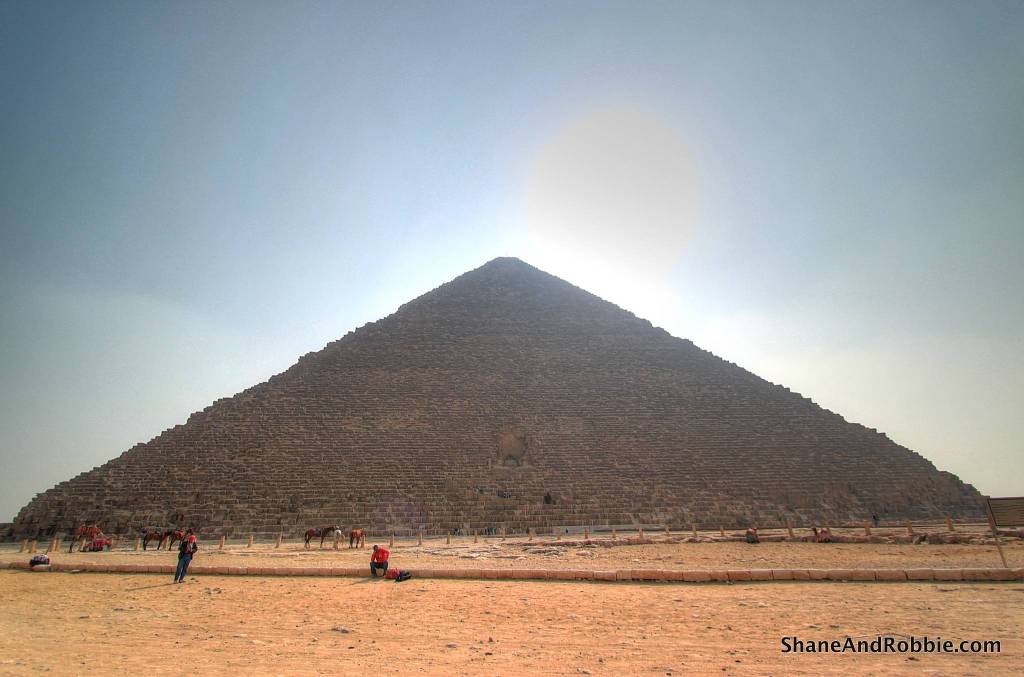 The Pyramid of Cheops is the only surviving structure out of the famed Seven Wonders of the Ancient World.

The mid-sized pyramid at Giza was built for Khufu’s son Khafre. It is Khafre’s pyramid complex that is gaurded by the Great Sphinx. This giant statue of a lion with a human head, with its broken nose and impassive gaze, was pretty impressive – especially when we learnt that it was carved from a single lump of rock found at the site.

Khafre’s pyramid is gaurded by the Great Sphinx.

The Great Sphinx of Giza was built to protect the entry into Khafre’s pyramid complex.

The Southernmost (and smallest) pyramid at Giza was built for Khafre’s son Menkaure. At 65.5m in height, Menkaure’s pyramid is representative of the size of pyramids built in the 5th and 6th dynasties, after which time pyramids were no longer constructed. The Great Pyramids of Giza therefore represent the pinnacle of ancient Egyptian pyramid-building.

The Great Pyramids of Giza represent the pinnacle of ancient Egyptian pyramid-building.

Seeing the pyramids today raised so many questions for us though – questions even our Masters-qualified, Egyptologist guide could not answer. Not least of all: how exactly were these massive monuments built (and so quickly!)? There are so many theories as to how the pyramids were constructed, why they were built as they were, why are they aligned the way they are at Giza, etc, etc. Some of the more interesting theories feature aliens or survivors from the lost city of Atlantis. I’m not averse to the odd alien/Atlantis/conspiracy theory myself, and standing beside the Great Pyramid of Cheops today, it was easy to see why these amazing structures inspire such fascination and theorising. It’s just hard to imagine primitive human beings from 45 centuries ago building them! 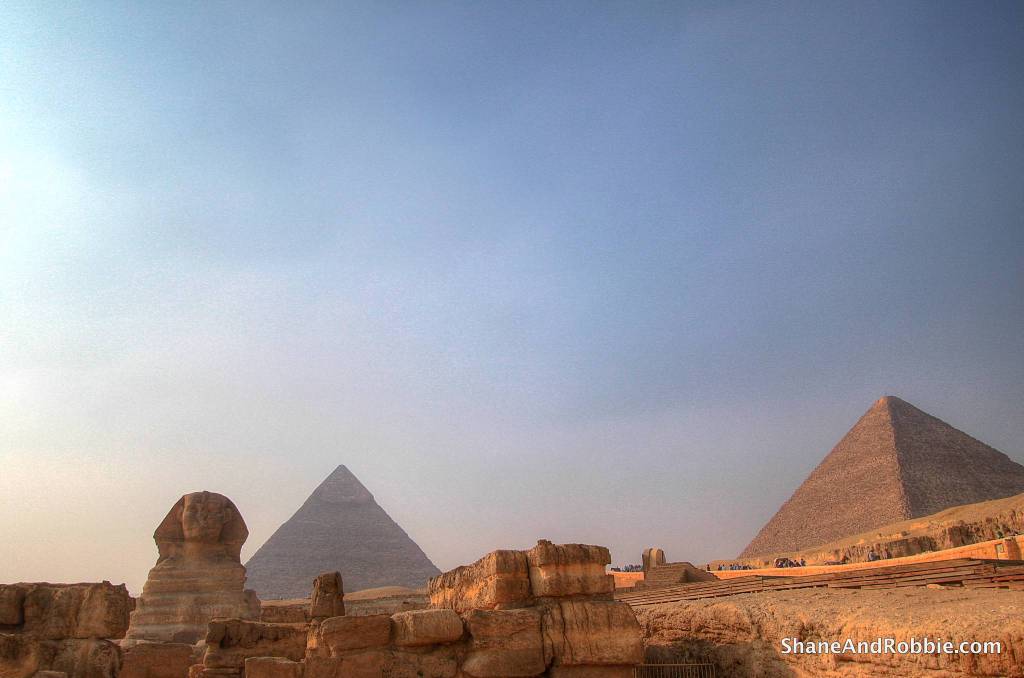 Whatever questions the pyramids of Giza raised for us, the Museum of Egyptian Antiquities added to. It also added to our fascination and awe. We saw statues of pharaohs that looked almost hemaphroditic, with female contours but male visages; we saw statues and pictures of other ancient Egyptian royals with huge ovoid heads (which their wigs and elaborate head-dresses were designed to cover it seems); and we saw examples of jewellery, surgical instruments and carving that speak of technologies so advanced the mind boggles. Unfortunately we couldn’t take any pictures within the museum, but believe us when we say it is totally worth a visit!

We only had half a day at the Egyptian Museum and wish we’d had a week! There was sooooo much so see there and there’s no way we can remember everything we saw. Suffice to say the highlights were the treasures of Tutankhamun and the dozen or so mummies. The mummies in particualr were amazing – you could see the eyelashes, fingernails and even henna-dyed hair on some of them. It’s amazing that they could have preserved so much of the bodies for so many millennia. Even today, with allour technology, we cannot replicate what the ancient Egyptians did in terms of mummification. Staring at the face of a king from 4,000 years ago: totally creepy, totally cool.

The Treasures of Tutankhamun were amazing because there was just so much of it! Unlike many tombs discovered in Egypt, Tutankhamun’s was found mostly intact. Inside the tomb there was a large collection of treasures and artefacts desigend tohelp the young king, who died at age 19, in his after-life. The best known artifact in King Tutankhamun’s tomb is the famous Gold Mask, which rested over the bandages that were wrapped around the King’s face. The mask weighs in at 11kg and is made of solid gold. The truly awesome thing about the Treasures of Tutankhamun is that he was the least of their pharaohs – it’s just the largest collection of treasure ever found intact. Imagine how much treasure a “great” king like Ramssess II would have been buried with! Wow.

There is a whole branch of archaeology known as Egyptology, with the complexities of ancient Egyptian history, culture, language and writing (i.e. hieroglyphics) requiring years of study to fully grasp. Obviously in a the short time we’re here we are barely scratch the surface of all this amazing history, but even the tiniest glimpse of ancient Egypt we got today was fascinating. Can’t wait for tomorrow, when we leave Cairo and head up to Alexandria to learn more about the GrecoRoman period of Egyptian history.

Rocking the Pyramids of Giza.