We went on a day trip to Abu Simbel today to see the Sun Temple of Ramses II and its neighbour, the Temple of Queen Nerfertari. Everyone at some stage in their life has seen the image of the 4 great statues of Pharaoh Ramses II flanking the entrance to the temple dedicated to his war victories. For us it was one of those sights that was on our “must see” list. It was so much larger in real life than we expected and so much more impressive!

The Sun Temple of Ramses II in Abu Simbel.

There isn’t much in the township of Abu Simbel, just a small community of Nubian villagers, a bank, a hotel, a small market and about 1,000 hawkers who (used to) live off the tourists who (used to) flock down here every day from Aswan in their hundreds. When the tourist trade was at its peak (3-10 years ago), Egypt Air used to fly from Aswan to Abu Simbel and back again 4 times a day. Now there’s 1 flight every 2-3 days at best. Lucky for us, there was a flight today! The flight itself only took 45 minutes each way, but add an hour’s wait at each airport, half an hour’s drive to get to and from the airport in Aswan and about 15 minutes drive to get between the airport and the temple in Abu Simbel, and that’s 5 hours of transit time in a day. All that just to see a couple of temples…. Totally worth it!

We flew from Aswan to Abu Simbel and back in one day – much easier than driving down and back which takes 3.5 hours each way!

The twin temples at Abu Simbel were originally carved out of the mountainside during the reign of Ramses II in the 13th century BC, as a lasting monument to himself and his queen Nefertari, and to commemorate Egypt’s victory against the Hittites at the Battle of Kadesh. Ramses II was one of the greatest Egyptian pharaohs of the New Kingdom* – under his 67 year rule Egypt prospered, the territories of Egypt expanded significantly and numerous temples were built. He was 96 when he died and is referred to in later Egyptian texts as “Ramses the Great” or “Ramses the Builder”.

*As if Egyptian history wasn’t complicated enough, the dynasties of ancient Egypt are also grouped together into 9 periods:

Ramses the Great had the temple built to honour himself. Was he a bit of a megalomaniac maybe?

Of all the temples built by Ramses II, Abu Simbel is considered to be the most impressive. The temple was originally carved out of solid rock and served a religious purpose as well as a defensive one: positioned right at the Southern reaches of the Egyptian Kingdom, the statues flanking the entry into the Sun Temple of Ramses II stared impassively at any potential invaders approaching Egypt from the Africa. It’s easy to see how the sheer size of the place would have made any enemies stop and ponder what kind of great and powerful king ruled the land of Egypt.

The 4 seated statues of Ramses II towered above us as we entered the temple. The torso of the second statue in this photo toppled after an earthquake around 600AD.

Wives, sons and daughters of the pharaohs were normally portrayed like this – much smaller than the pharaoh. When Ramses II built a whole temple dedicated to his wife Nefertari and had statues of her made almost the same size as his, it must have caused quite a stir!

Entering into the temple the humbling effect was even greater as we were stared at by the 8 stern-faced statues of Ramses II that line the Grand Hall. All the walls within this first chamber were covered with hieroglyphics telling of the pharaoh’s great victories in battle – there was even one giant relief showing Ramses II standing on the face of one enemy whilst attacking a second. All very epic. 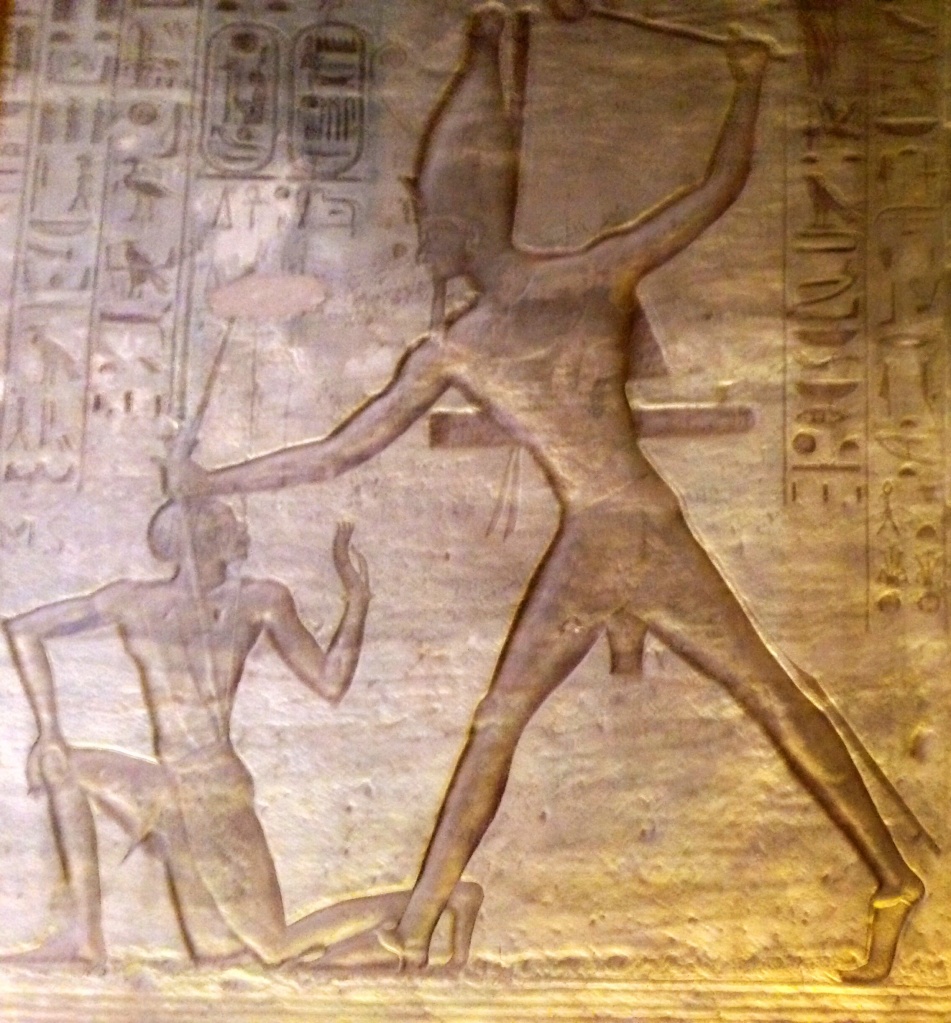 There were a number of smaller rooms either side of the Grand Hall apparently used for performing rituals associated with the king’s birthday (22 February) and coronation (22 October) – both very important dates. So important in fact that the temple was designed so that on 22 February and 22 October every year sunlight reached all the way through the Grand Hall into the chapel beyond, to illuminate the face of the statue of Ramses II built within. It’s amazing to think of the astronomical, mathematical and engineering skills required to carve a temple out of a mountain so that the sun only penetrates all the way into the temple on 2 specific days every year!

One of the many side chambers carved out of the mountain in Ramses’ great temple.

These 4 statues were within the deepest chamber of the temple. The 1st, 2nd & 4th from the left are gods and the 3rd was Ramses II. His face alone is illuminated on 22 February & 22 October each year.

The Sun Temple of Ramses II is quite unusual in that Ramses is portrayed throughout as a king equal to the gods. It’s also unusual in that Ramses pays tribute to his wife Nefertari, with hieroglyphics portraying her as the most beautiful woman in Egypt to be found in one of the rooms. There was obviously some real respect between Ramses II and Nefertari as he also had a temple built just next door to his dedicated to her. In the Temple of Nerfertari the queen is portrayed as being equal to Hathor, ancient Egypt’s life-giving cow goddess.This temple was much simpler than the Temple of Ramses II, but stunning in that many of the hieroglyphics still retained their colour. These temples must have been amazing when they were all painted in full, vivid colour.

Just next door to Ramses’ temple is that of his wife Nefertari, where she is portrayed as equal to the Egyptian goddess Hathor.

What impressed us even more was knowing that the 2 temples at Abu Simbel were not originally built in their current location. Like the Temple of Isis yesterday they were dismantled and moved in the 1960s when the Aswan High Dam was built and the temples were threatened by submersion. In a UNESCO funded project a team of Swedish engineers managed to slice up and move the temples and the entire mountains they were carved out of.  Everything was reassembled, in the exact same positions relative to each other and facing in eactly the same directions so that the sun stll illuminated the depths of the Sun Temple of Ramses II on 22 February and 22 October every year.

So impressed by the temples of Abu Simbel!

Now we’re back in Aswan for our last night here – tomorrow we set off down the Nile for our cruise. It will be so cool waking up to the sounds of the river and being able to watch the sun rise and set over the desert! Tune in tomorrow to see how cool cruising the Nile can be…

The huge Lake Nassar was formed in after the High Aswan Dam was built. The lake is full of huge fish and crocodiles but down river there are no crocs – makes for much safer conditions for people living downstream, no doubt!