Cruising from Aswan to Kom Ombo on a floating hotel  We left Aswan today aboard a luxury cruise boat, bound for Luxor. We’re cruising the Nile in style the next few days, with stops at various temples along the way – starting this afternoon with the Temple of Kom Ombo.

Cruising the Nile, heading from Aswan to Luxor.

Our ship, the Royal Esadora, is a 50-berth swanky affair built just a few years ago. We have a great cabin and are really looking forward to having a few days of serious relaxation time. Normally there are up to 300 of these “floating hotels” cruising up and down the Nile between Aswan and Luxor, but with things being so quiet here at the moment there were 2 boats scheduled to sail today, including ours. That meant we had the whole river and Kom Ombo virtually to ourselves, which was awesome!

Our home-away-from-home for the next few nights: the MS Royal Esadora.

Ahhhh 5 star luxury – it’s been a while since we had a bit of that!

We had a marvellous day floating down the Nile, watching the villages and towns of Egypt go past as we relaxed up on the appropriately-named sun deck. Below are just some of our favourite shots from today (click on the photos to see them in full size).

The highlight of the day, however was without a doubt, our visit to Kom Ombo at sun set. Watching the colours play across the ruins of the temple and the desert sands was wonderful – definitely a sight to remember.

Sunset over the desert – definitely a sight to remember.

Dedicated to the crocodile god Sobek, the Temple of Kom Ombo was built around 100BC during the Greco-Roman period of Egyptian history, which makes a relatively new temple by Egyptian standards! The temple is unusual in that it is actually dedicated to 2 primary gods: Horus and Sobek. This duality means there were 2 entries, halls, sanctuaries and offering rooms – one for each god. There’s not much of the temple left unfortunately, with the roof and many of the rooms destroyed by Nile floods, by early Coptic Christians, and by builders who, during the 19th century, removed some of the stones to use them as foundation stones to construct a nearby factory. What is there is fascinating though, not least of all because of the uniqueness of its dual design.

The temple is symmetrical down the centre, with one half dedicated to Horus and the other to Sobek.

We had the temple literally to ourselves. Totally awesome! 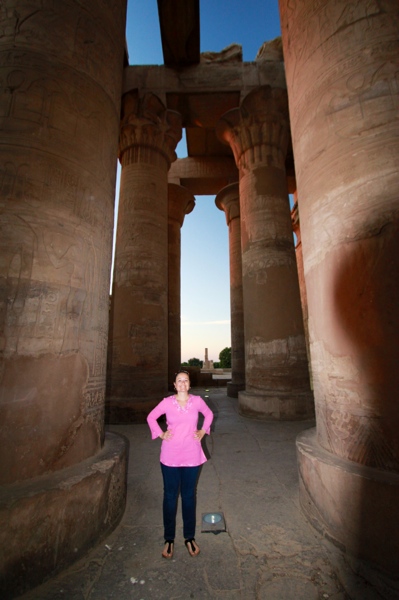 It was great exploring the temple as the sun set watching the colours change as the sun dipped lower and lower in the sky.

The temple is also unique in that it is dedicated, at leats in part, to Sobek. There are, apparently, no other temples left in Egypt dedicated to this crocodile-headed god. Designated a god of fertility in the Greco-Roman period, Sobek was revered alongside Hathor, the cow-faced goddess of fecundity and rich harvest. His image was everywhere in the temple and in the small museum next door to the temple we saw a few of the 300 crocodile mummies discovered in the vicinity. The size of the mummified corpses ranged from tiny palm-sized babies to enormous 7.5m monsters. 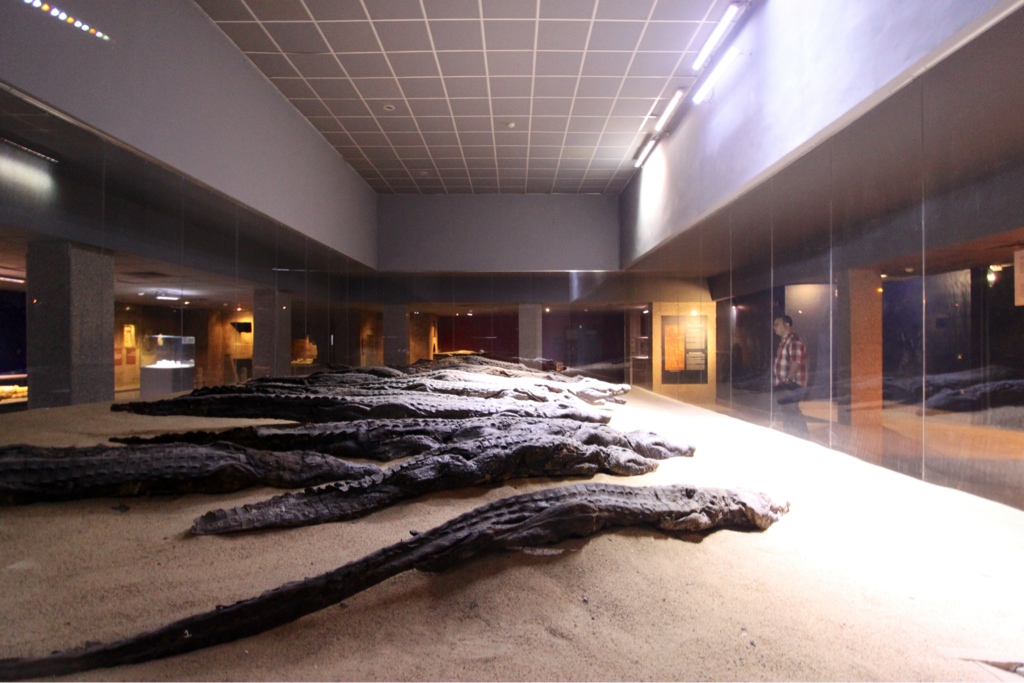 Just a few of the mummified crocodiles found at Kom Ombo.

Images of Horus, the falcon-headed god, and of Sobek, the crocodile god, were everywhere.

We left the Temple of Kom Ombo just as the sun was setting. Spectacular.

We’re now back on board our cruise ship enjoying a pre-dinner drink in the comfort of the bar (with free wifi internet!), and looking forward to waking up tomorrow morning in Edfu wher we’ll get to see another of Egypt’s amazing desert temples. Tis bah ala khair until then!