To escape the hustle and bustle of Fes we took a day trip out to Sefrou today. This small farming town of 70,000 inhabitants is just 30km from Fes but a world away in terms of the vibe and pace of life. Sefrou isn’t just smaller than Fes, it’s a completely different kind of town; it’s not on the well-worn tourist path through Morocco and so hasn’t got the steady source of forigen income Fes has. Sefrou also lacks the modernity of cities like Fes, Casablanca and Rabat. Sure, the town has electricity and most (but not all) homes have running water and sewerage, but most other aspects of life in Sefrou have changed little over the past 500 years. In some ways visiting Sefrou was a little like taking half a step back in time.

Sefrou hasn’t grown beyond the original walled town that was built in the 9th century. The town sits on the slopes of the Atlas Mountains, surrounded by valleys of cherry trees. Cherries are the town’s main source of income, with the annual Cherry Festival (held every June) being the highlight of the year. The festival gives the locals a chance to showcase their traditional costumes, arts and crafts – they even crown a “Miss Cherry” every year. We missed the cherry festival this year, but did get to see the weekly market in full swing. It was great seeing all the locals out and about doing their weekly shopping and going about their daily business. 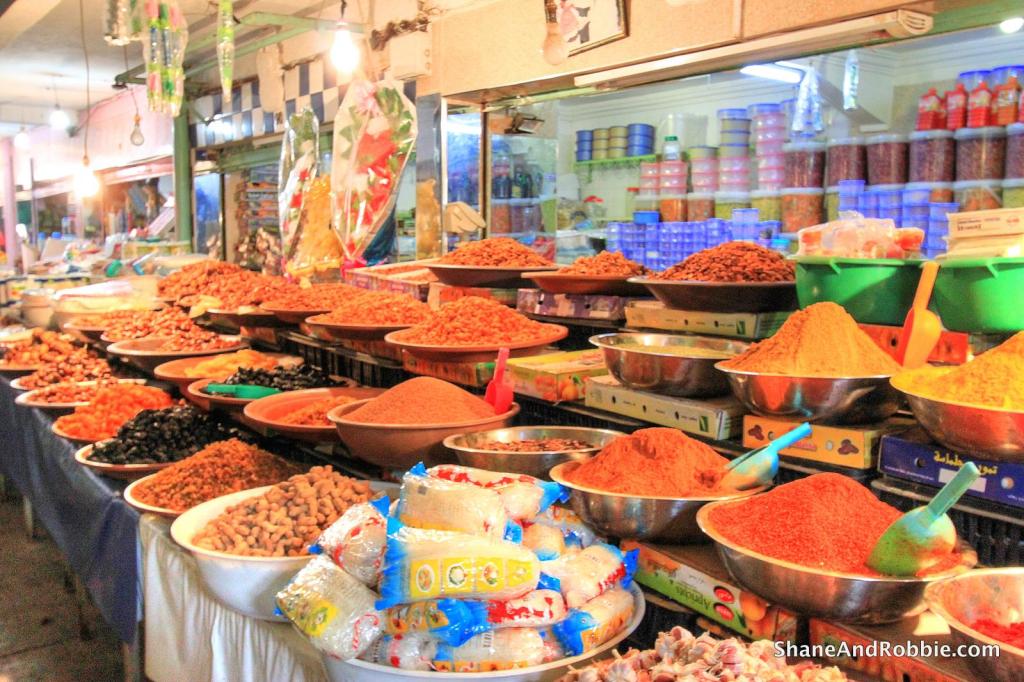 The weekly markets in Sefrou were a riot of colour and smells. 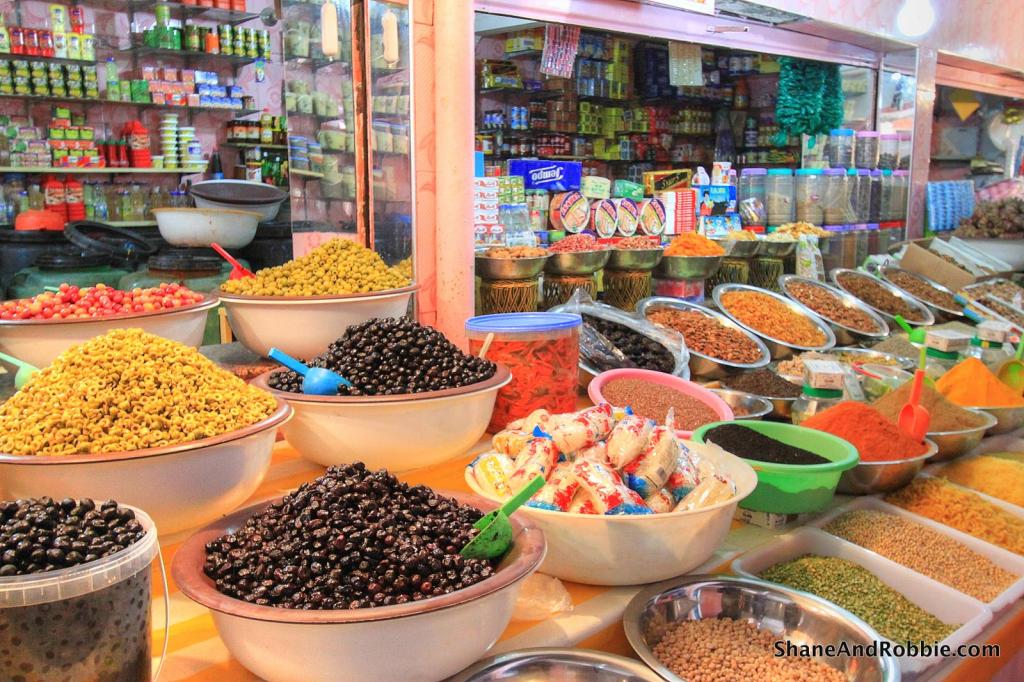 Olives, cous cous, beans and peas of every colour and variety on offer in Sefrou. 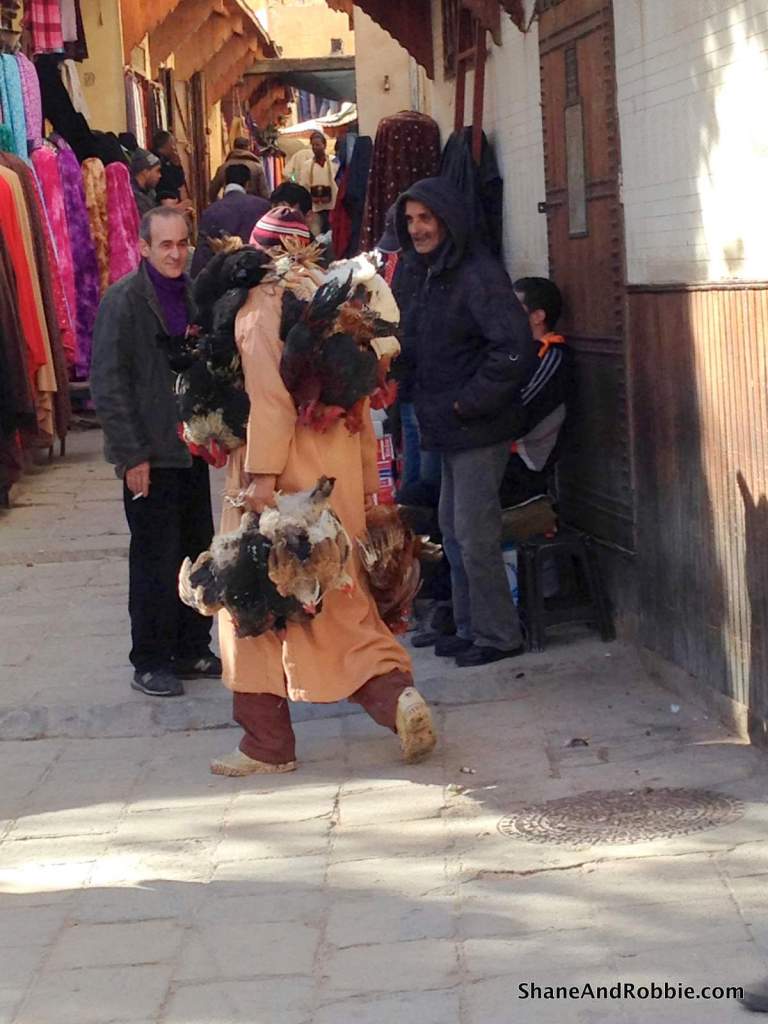 Most of the produce for sale was local, organic and super-fresh. These chickens, for example, were still alive!

We also got to see some local craftsmen at work, plying their trade in tiny workshops using methods that have remained relatively unchanged for centuries. We saw carpenters at work making ploughs for the farmers’ fields, and blacksmiths hammering out iron bars to make axe heads and farm tools. 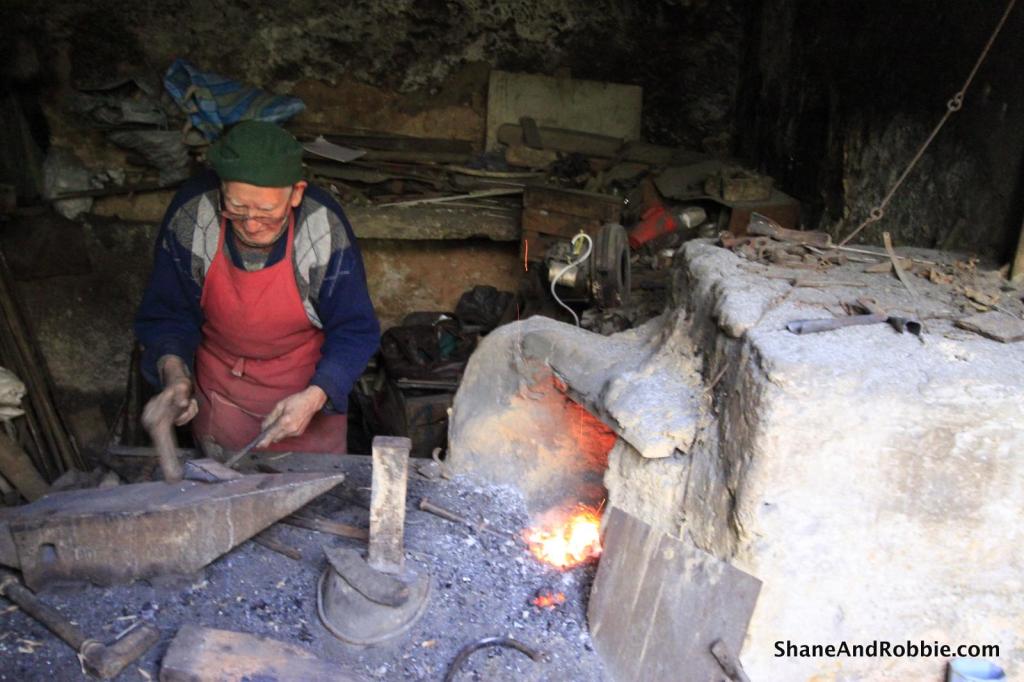 One of Sefrou’s blacksmiths. This guy was 71 years old and had been working in this forge since he was 10. Toughest 71 year old we ever met!

One of our favourite parts of the tour through Sefrou was visiting the communal bakery. Many homes in the old medinas of Morocco do not have ovens, so everyone sends their bread to be baked in the communal oven. We saw a number of women bring their flat, round piece of dough to the bakery to have it cooked here. Each of them have their own mark that they put on the dough so that there are no mix-ups. 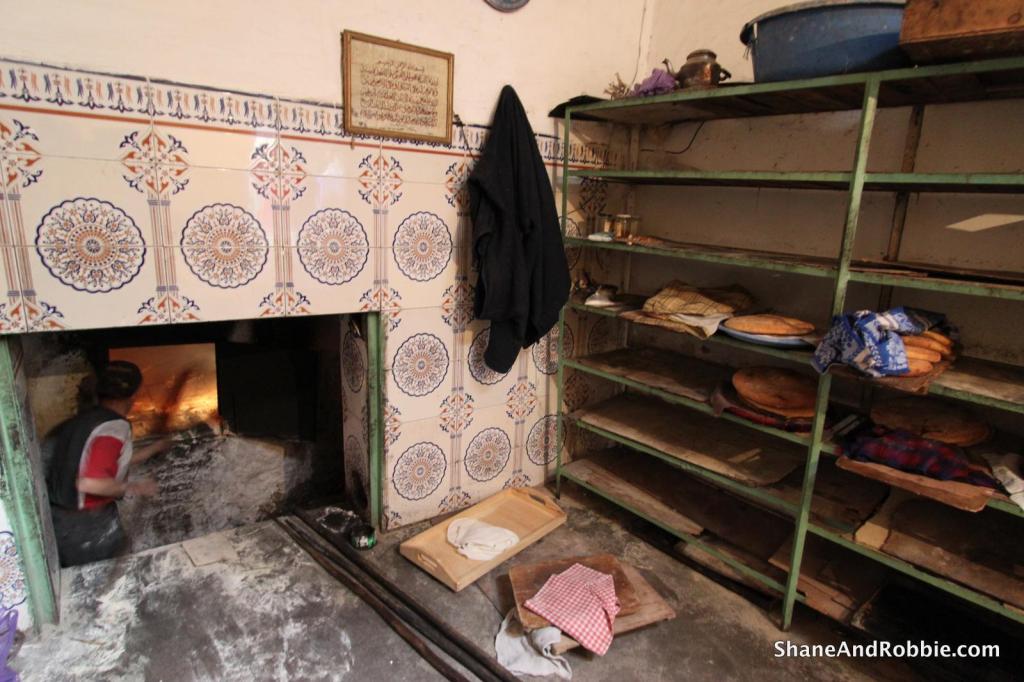 Sefrou’s communal bakery turns around some 2,000 loaves every day.

Sefrou began as a market town in the Roman era and as a stopping point for caravans of traders making their way from the Mediterranean to the Sahara desert. The town was a melting pot of culture as Jewish refugees from the Iberian Penninsula, Berber Moroccans and Algerians all settled there over the centuries. By all accounts the town was very pretty and characterful in its day, but then the Jewish inabitants left for Israel during the 1960s and the river that flows through the town flooded, causing extensive damage to many of the old buildings in the medina. Unfortunately the result is a town much diminished in beauty and appeal. There were some signs of renovation and government-funded repair work, but overall the town was nowhere near as attractive as others that we’ve seen in Morocco so far. It was still interesting seeing how the people of Sefrou live, following the same rhythms and routines that their fathers and forefathers did. 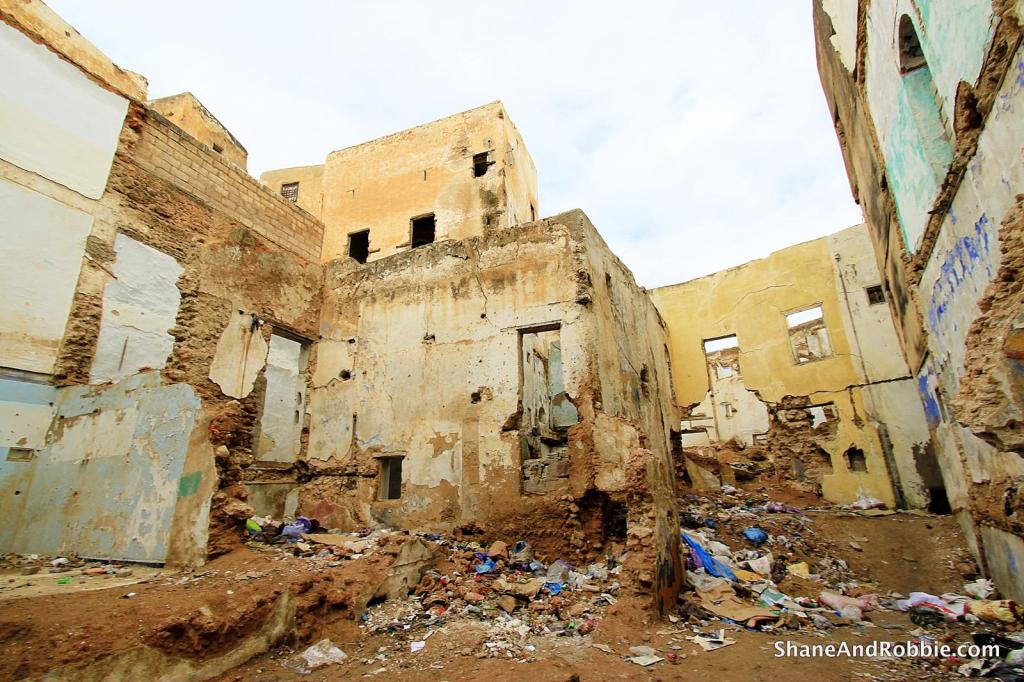 Unloved and left to fall apart – Sefrou’s historical centre is beginning to receive the TLC it needs. 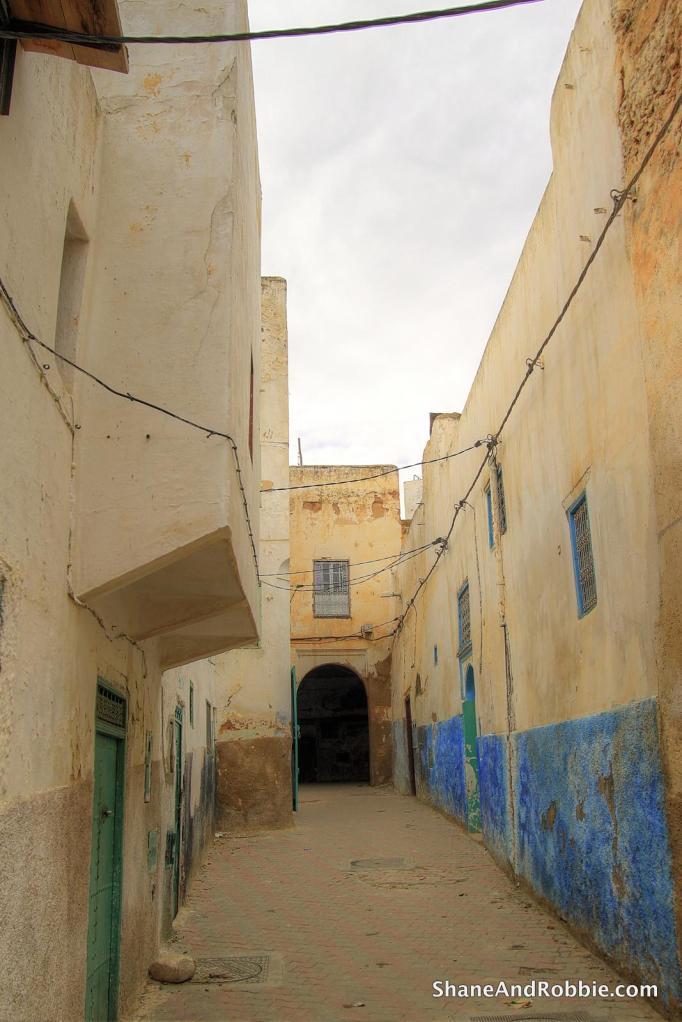 One of the recently renovated streets.

Our final stop for the day was a visit to a local pottery and zellij* crafts centre, where craftsmen and artists work together to create tables, fountains, pots, vases, mugs, teapots, plates and tagines in every colour and style imaginable. It was fascinating watching the men and women throwing pots, painting them, glazing them, cutting up tiles for mosaics and laying down mosaics. Unfortunately we aren’t in the market for a dinner set, fountain or mosaic-covered table, but maybe one day we can come back here and buy a house-full of stuff!

*Zellij is the name given to the decorative tile work characteristic of Moroccan architecture. It consists of geometrical mosaics made of coloured ceramic tile and is used to decorate walls, ceilings, floors, fountains, tables, etc. Historically zellij decoration was a statement of wealth and sophistication. This form of art arose from the need of Islamic artists to create decorations that avoided depictions of living things, consistent with the teachings of Islamic law. 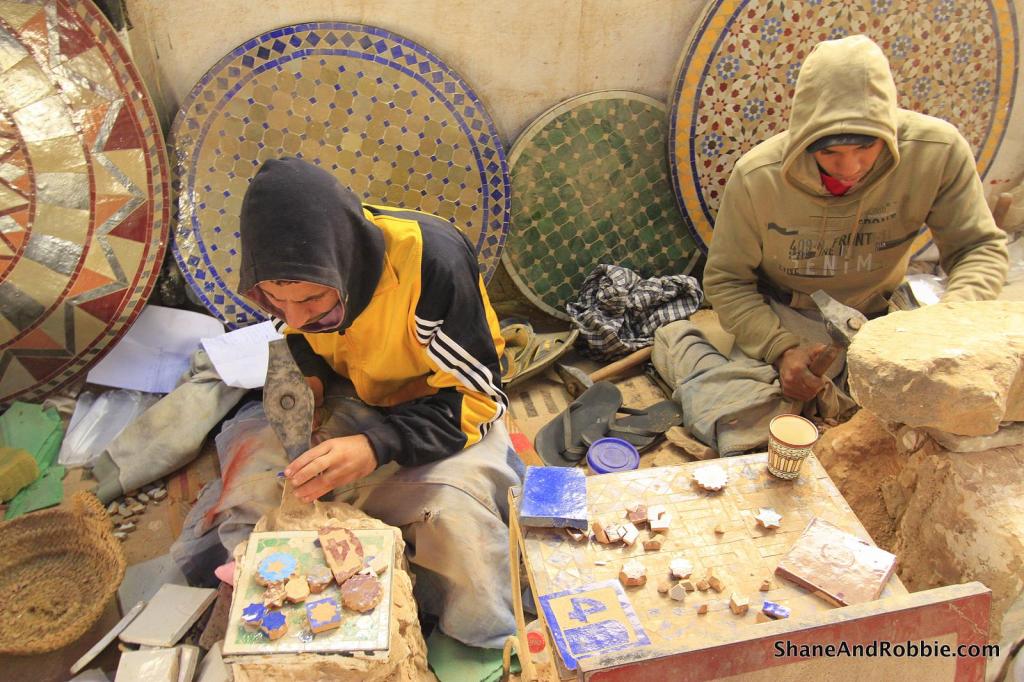 These guys were cutting up coloured tiles for use in mosaics. 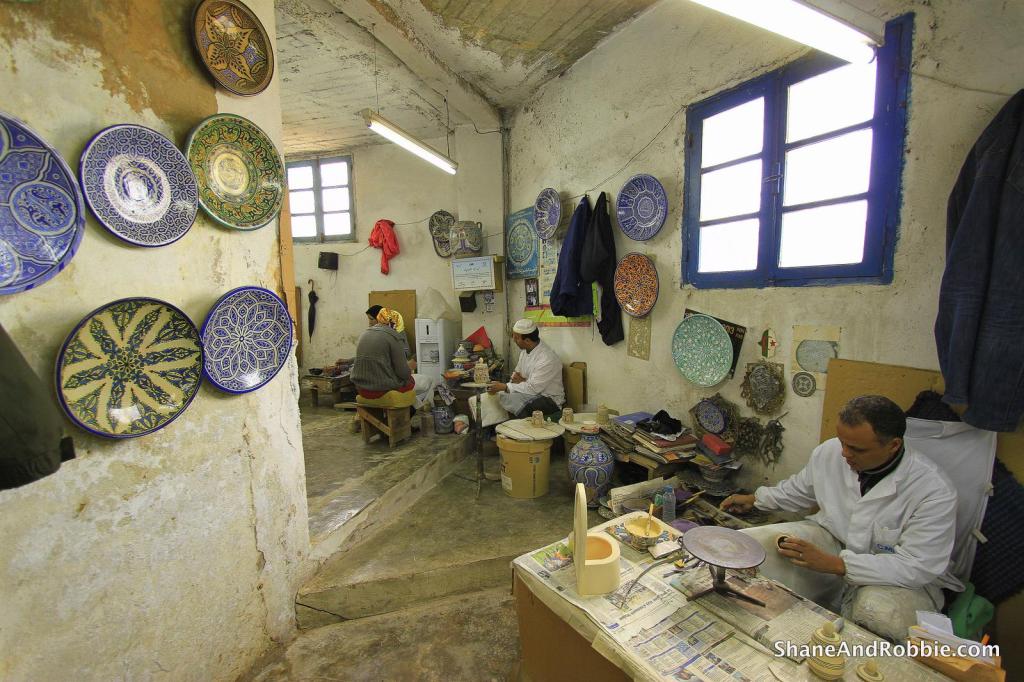 Here the artists were at work decorating the smaller pottery works before their second firing. 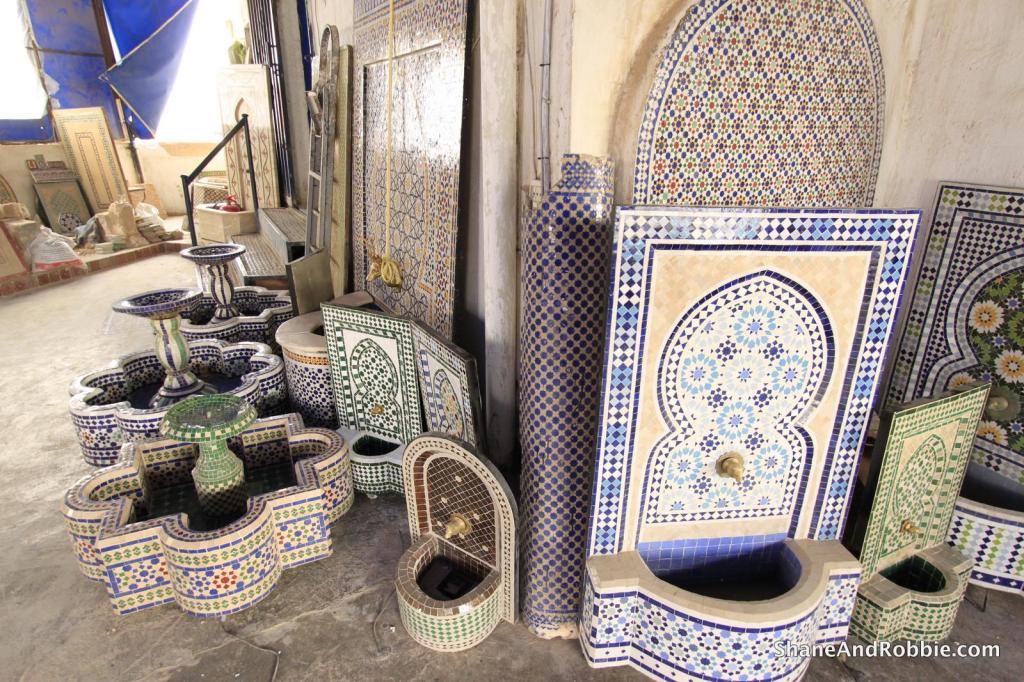 Some of the finished works, waiting to be shipped overseas. 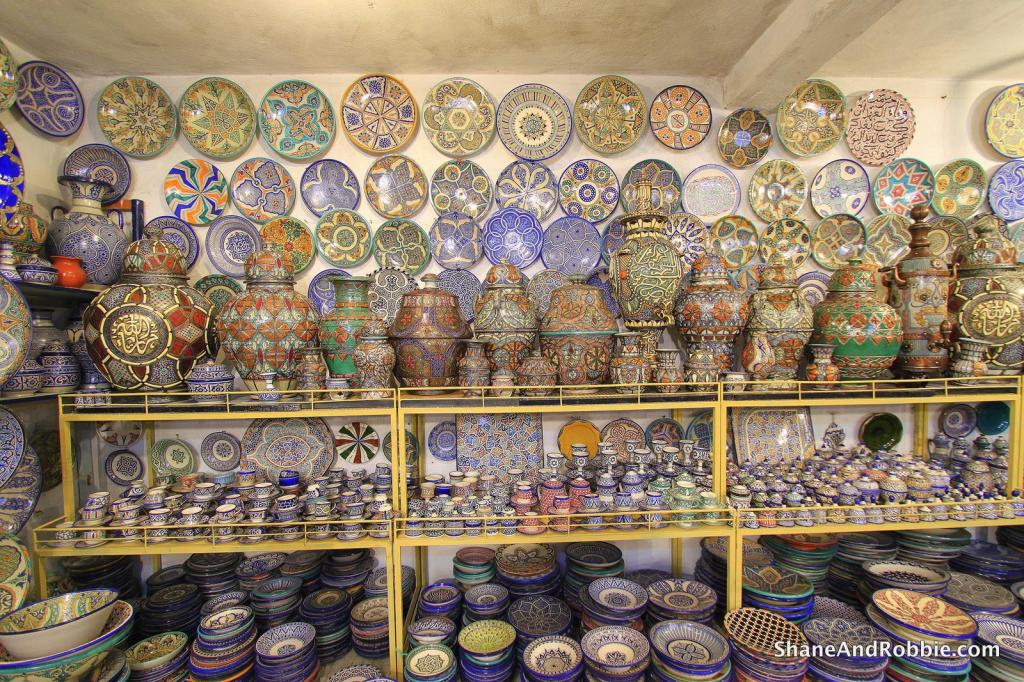 Wouldn’t you just love a whole dinner set decorated like this?!

We were back in Fes for a late lunch and enjoyed a roof-top feast at a restaurant in the medina recommended to us by our guide. We started with the usual Moroccan appetisers of olives and fresh baked bread, then went on to an entree of dips and vegetables cooked in a variety of spices. The chicken and apricot tagine I had as a main was amazing and Shane’s beef and almond tagine was melt-in-your-mouth tender and tasty to boot. Finally, for desert we had fresh pomegranates and  other seasonal fruits. Totally awesome and enough food to keep us satiated for at least 24 hours! The food here in Morocco is proving to be a real highlight – it is simply divine! 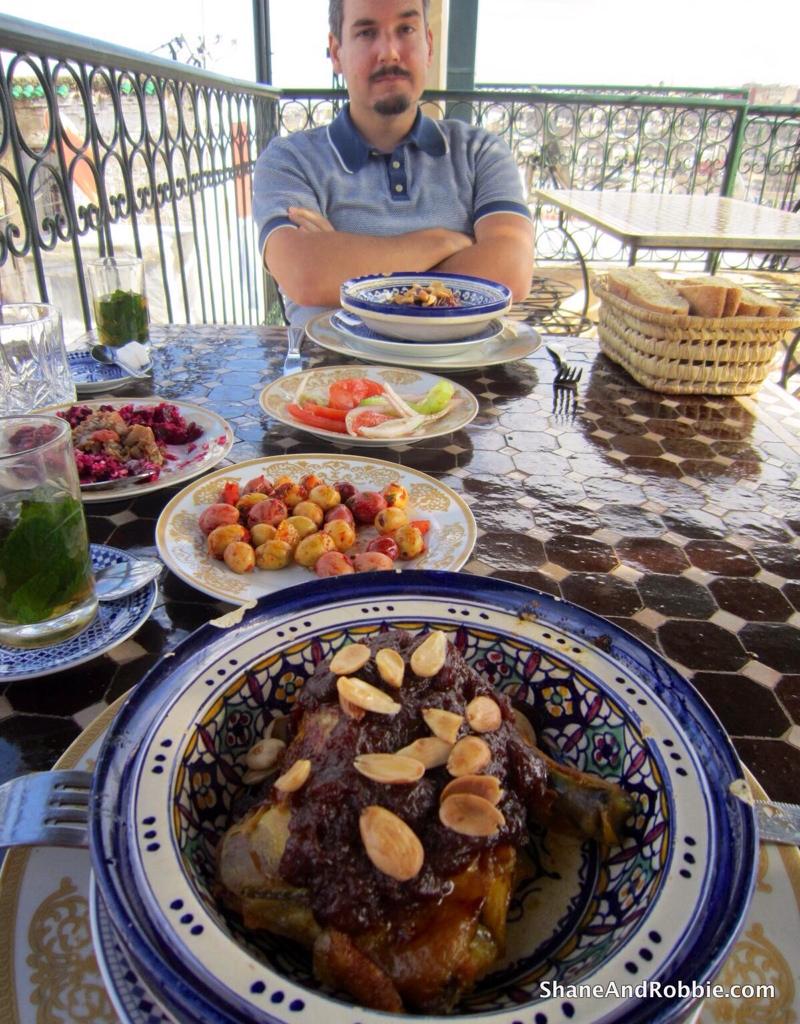 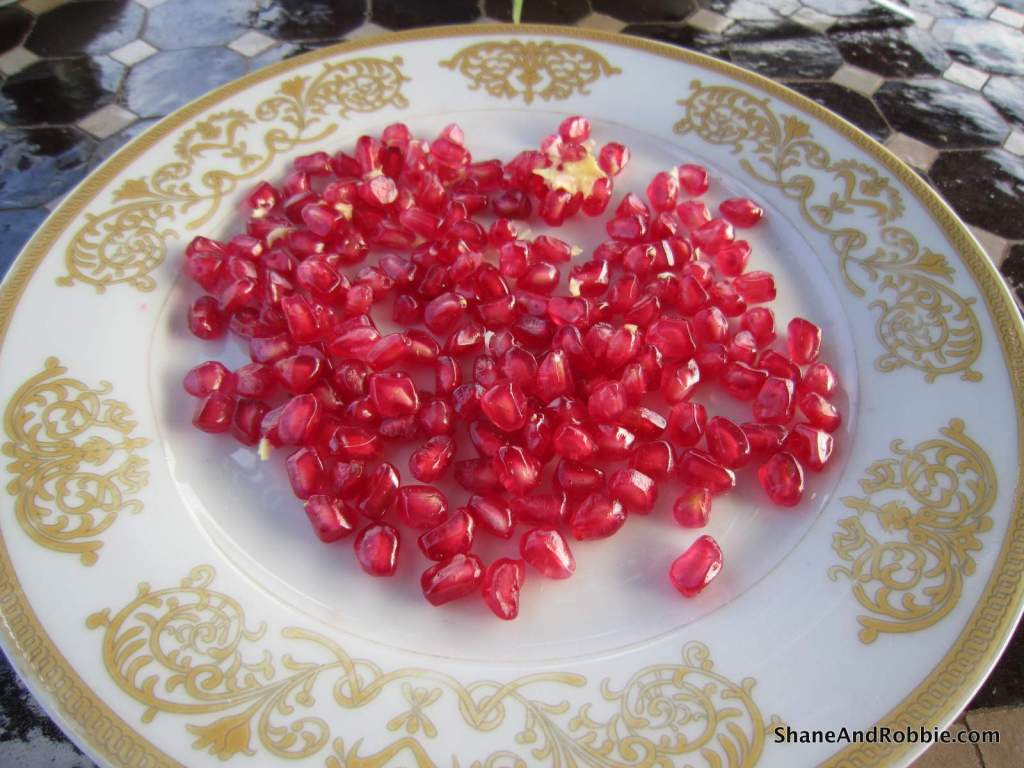 …and fresh pomegranate for dessert! Another fantastic feast, Moroccan style.