Bound for the desert

Today we drove from Fes, across the Atlas Mounatins, to Er Rachidia, a desert outpost at the base of the Atlas Mountains on the very edge of the Sahara. Today was essentially a travel day with not too much sightseeing action, though the scenery as we traversed Morocco’s highest mountain range was pretty spectacular. The highlight of the day, however, was our lunch time stop in the alpine town of Ifrane where we got to see a colony of wild Barbary apes at play. They were most entertaining!

We left Fes this morning and headed straight up into the mountains. Our first stop for the day was for lunch in Ifrane, Morocco’s premier alpine skiing town. Built by the French in the 1930s, Ifrane became a retreat for the colonialists and wealthy Moroccons who wanted to escape the summer heat. With its wide avenues, European-style villas and plenty of green space, Ifrane looked more like a European ski village than a Moroccon one! Aside from its ski fields, the town’s other claim to fame is the giant sculpture of a Barbary lion in its main square. Carved out of one giant rock in the 1930s the statue is said to commemorate the death of the last Barbary lion*, who was killed by hunters eager to possess its fur and mane. After lunch and a photo stop with said lion we left Ifrane and  continued climbing, aiming for the main pass through the Atlas Mountains.

*The Barbary lion has been hunted for millennia, with the beast’s large size (it was substantially larger then the lions of sub-Saharan Africa) and ferocious appearance making it a favourite in Rome for gladiator fights and other such spectacles.

The Atlas Mountains run across the North-West of Africa, starting at the Atlantic Coast in Morocco and extending through Morocco, Algeria and Tunisia. This is the highest mountain range in Africa, with the High Atlas Mountains reaching 3,000-4,000m in height. In Morocco the Atlas Mountains act as a dividing range, seperating the wetter, greener, lusher North and Western edges of the country from the arid desert areas of the South-East. 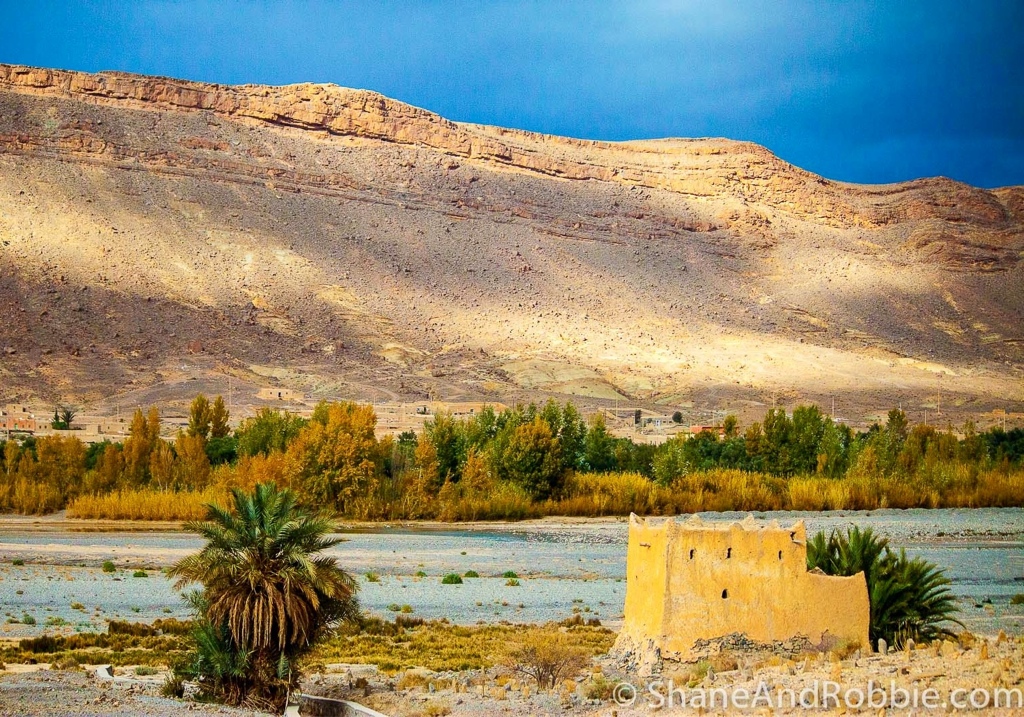 The Atlas Mountains receive up to 2m of rain per year. Most of this water collects and flows downstream as rivers, which then keep Morocco’s bread basket watered. 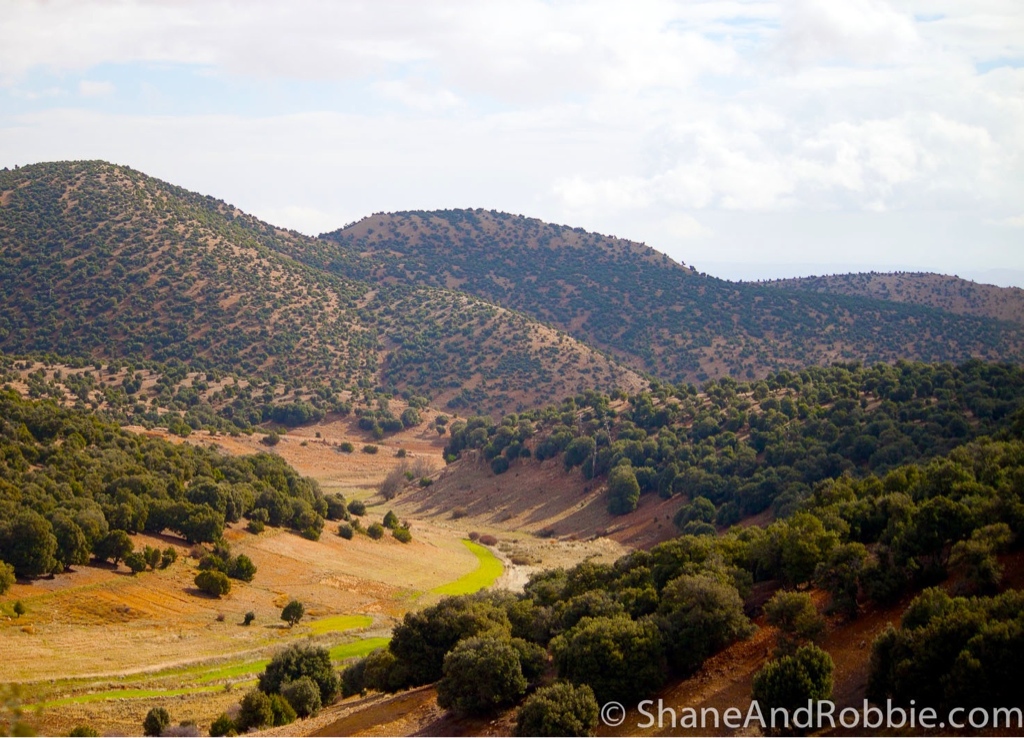 The Atlas Mountains separate Morocco into 2 parts – the green ocean side and the dry desert side.

Formed some 65 million years ago when Europe and Africa collided, the Atlas Mountains are one of Morocco’s richest natural resources. It is here that most of Morocco’s rivers are born – rivers that carry water to the North and West of the country for drinking, household use and irrigation of farmland. The mountains also contain deposits of iron ore, lead, copper, silver, mercury, phosphate and natural gas. Forested with cedar, oak. juniper and thuja trees, this is also Morocco’s last remaining wildlife reserve. 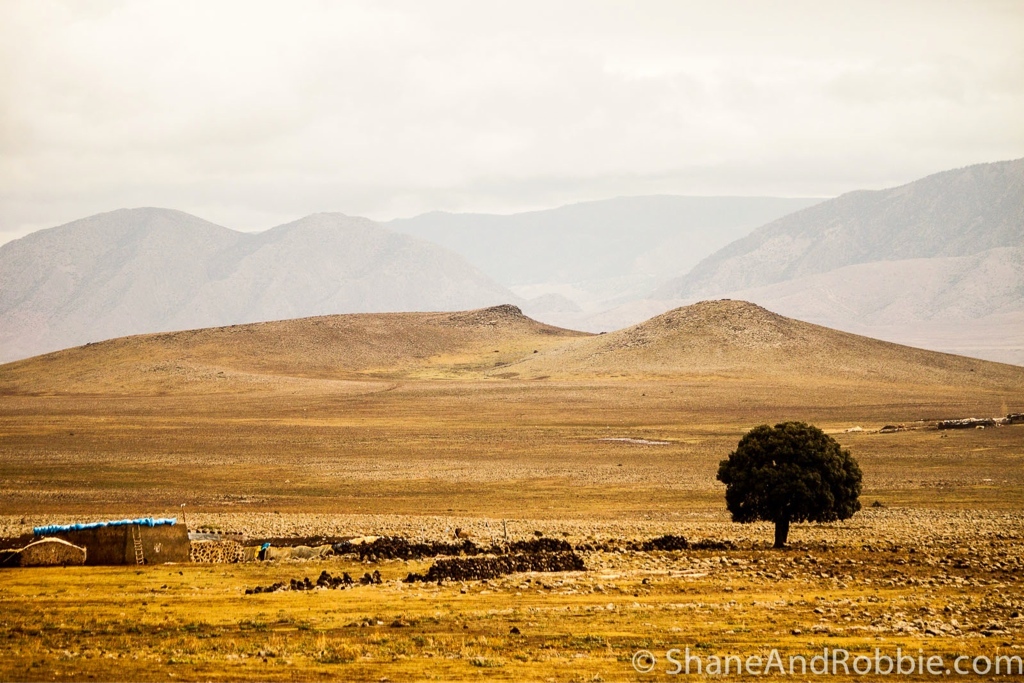 These mountains are rich in minerals and other natural resources.

The landscape changed quickly once we got up into the High Atlas Mountains.

The mountains have been home to a number of plant and animal species unique in Africa, though many of them are endangered and some are already extinct. Examples include the Barbary ape (a type of macau), the Barbary antelope (endangered), the Barbery leopard (also an andangered species), the Atlas bear (Africa’s only species of bear; now extinct), the Barbary lion (hunted extensively throughout the ages; now extinct), and the North African Elephant (once used by Hannibal in his expedition across the European Alps; now also extinct).

These mountains were once full of wildlife, now only domestic animals roam the high alpine pastures.

The long road through the mountains…

Of all Morocco’s wild animals only the Barbery apes (known locally as mgou) exist in sufficient numbers to be easily spotted. We saw a whole colony of them at play beside the road on our way out of Ifrane and pulled over to watch them for a few minutes. Barbary apes are actually a type of macau and are related to the “snow monkeys” (aka Soup Monkeys) we saw in Japan. Roughly the size of a dog, they are inquisitive, intelligent, mischevious, but rather territorial (hence our guide Tariq’s advice to us to stay at least 2-3m away from them and not make direct eye contact with them – especially the dominant males). They live in family groups and live off nuts, berries and other primarily vegetarian sources of sustenance. The group we watched also seem to have adopted a pack of stray/wild dogs into their family unit – it was really interesting seeing how the dogs interacted with the apes, sharing in their food but submitting to the dominance of the primates.

This guy’s name is Tariq.

Yusef here was the dominant male of the clan.

It was great watching these guys at play!

Most of the people that inhabit the Atlas Mountains are Berbers (Imazighen as they call themselves – which translates loosely to “the free people”), though even they only live at the higher altitudes seasonally. Herds of sheep, goats and cows are brought up to the High Atlas Mountains during summer when pastures are lush and green; as the weather cools however, the semi-nomadic Berbers return to their villages in the foothills to weather out the winter. The climate up in the mountains is harsh, with winter temperatures around -20C not uncommon. Already there is snow on the highest peaks, and the temperature today barely rose above 10C.

The harsh climate up in the Atlas Mountains means the area remains sparsely populated.

An example of the epic vistas we were treated to today.

Late in the afternoon we crossed over the mountains and down into the Ziz Valley. Formed by the Ziz River, this valley was lined by lush green grass, date palms and bountiful fruit trees. Most of the Berber tribes who live in this region have their winter villages in this valley, building their homes and animal stables out of mud and straw and cultivating the land along the river’s edge. We passed a number of these farming comunities during our drive through the Ziz Valley and are actually staying in a large Berber town called Er Rachidia tonight. 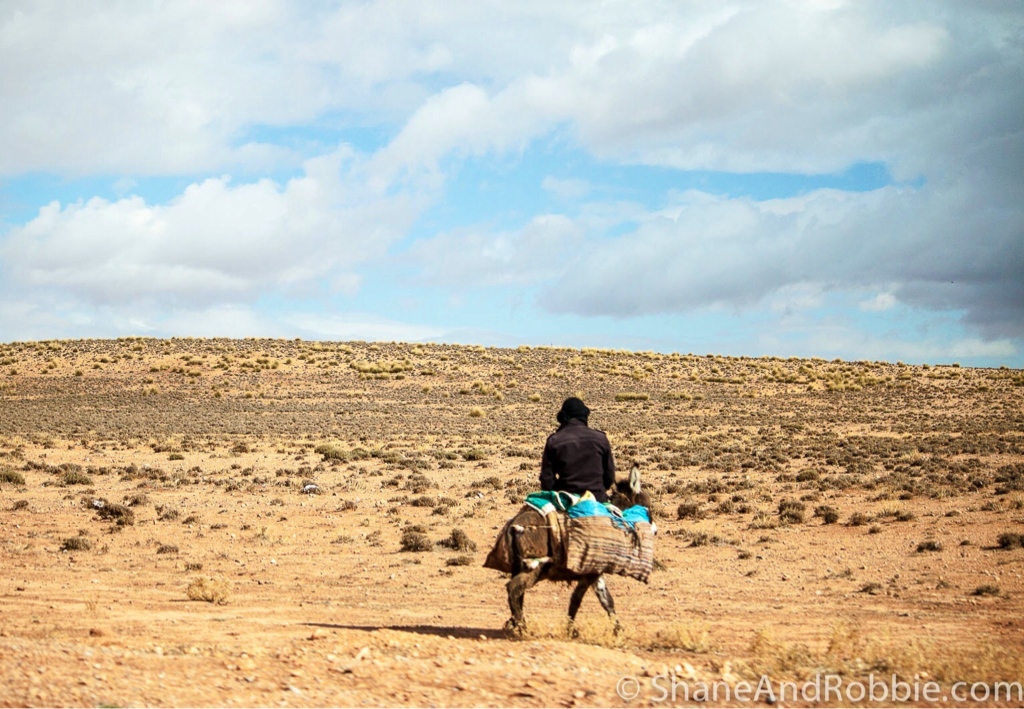 Life in the Atlas Mountains is pretty basic. 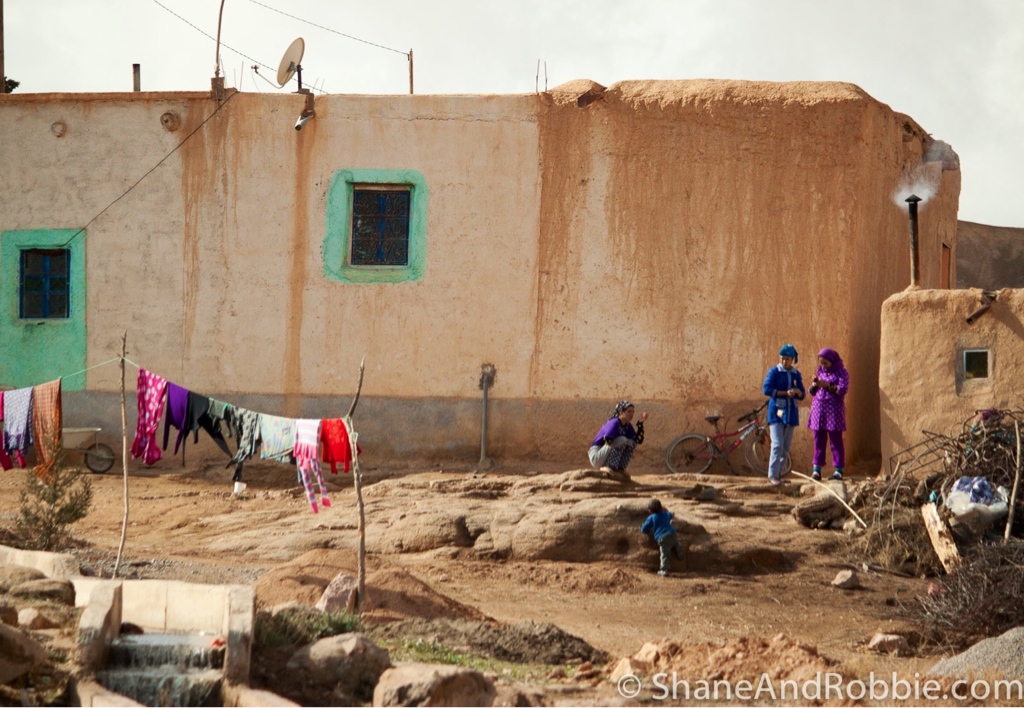 There is nothing of note in Er Rachidia really, but it makes a good stopover on the way out to the Sahara. So for tonight we’re staying in a very basic guesthouse run by a local family, and tomorrow we’ll be heading off nice and early again, bound for the Sahara Desert. Can’t wait! 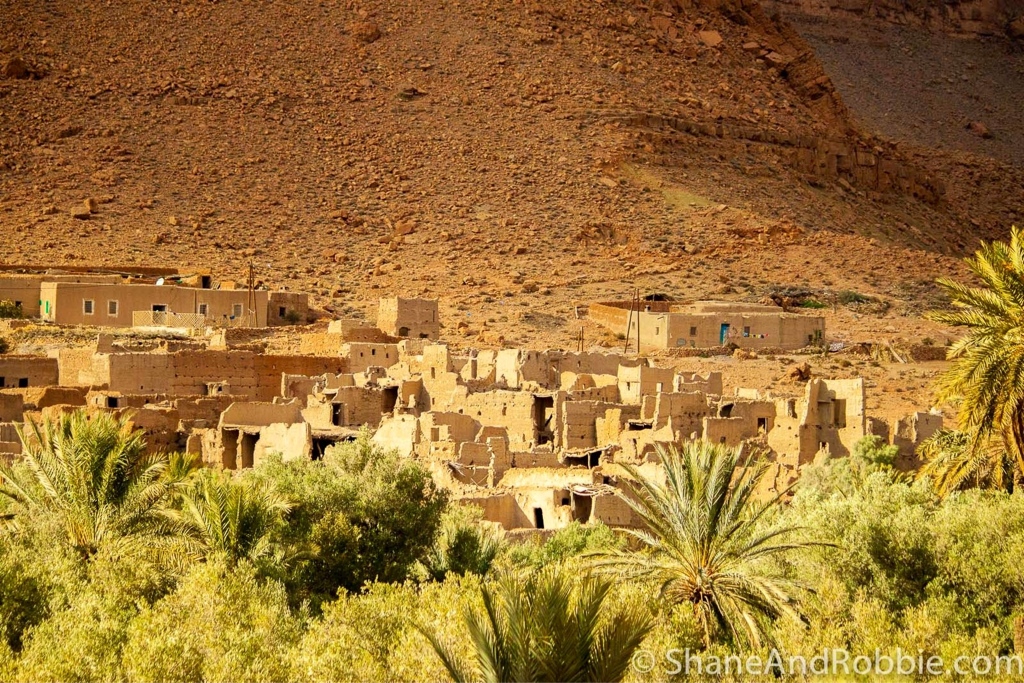 Our stopover for tonight: the Berber township of Er Rachida.

Heading out into the Sahara tomorrow – can’t wait!