A long drive through the burnt desert

Today we took a rarely travelled route from Merzouga through the Djebel Saghro to the fortified village of N’Kob. The Djebel Saghro is a volcanic expanse that lies between the High Atlas mountain chain and the enormity of the Sahara Desert; it’s a lunar landscape of plateaus, peaks, canyons and vast empty spaces. It took us hours of driving to cross this desolate region and tonight we’re staying right on the edge of the Djebel Saghro is the small Berber village of N’Kob, whose name means oasis in the local dialect.

The vast, burnt expanse of the Djebel Saghro.

The Djebel Saghro is one of the driest part of Morocco, with average rainfalls being less than 10mm per year. It’s a dusty, dry, isolated part of the country, with just a few Berber villages spread across the region; these villages are few and far between, and were always clustered around the handful of oases that exist in the area.

The few Berber villages we saw on our drive today were clustered around the spring-fed oases of the region.

That human beings have managed to survive out here for centuries is truly amazing!

The ground here is black – as if burnt by the scorching sun that bakes the earth here for most of the year. All we passed were black rocks, acacia trees*, wild camels and the occasional cluster of flat-roofed, adobe (i.e. mud and hay) Berber homes. It’s about as unwelcoming a landscape as you can imagine. The situation is made worse by the fact that the area has been in drought for the past 5 years.

*These, we were told by tariq our guide, are also known as the “umbrellas of the desert” as their broad canopy provides much needed shade in the searing heat of the desert sun. He also told us that before choosing to enjoy one of these “umbrellas of the desert”, however, it is important to check who or what you might be sharing said umbrella with as on hot summers’ days these trees are a favourite resting place for cobras and scorpions. Yikes! 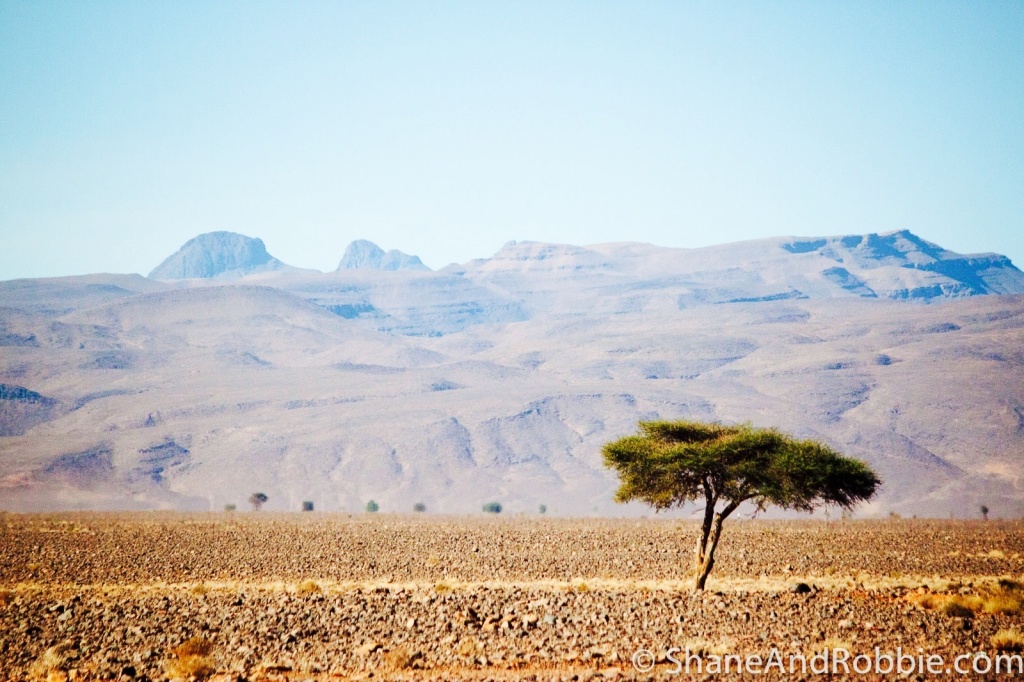 A desert umbrella. Just watch out for the cobras and scorpions!

Talking to our host here in N’Kob we learnt that the drought is severly affecting village life. The date palms they rely on for food and to sell, for example, are producing a quarter of the yields they were 5-6 years ago. The villagers used to use water from underground springs to irrigate the land and cultivate wheat, barley, vegetables and fruit trees (almond, walnut and some peach). With the recent years of drought however these underground springs have all but dried up and many of the farms are now little more than dust. Our host showed us through the fields and the village and pointed out all the empty houses – empty because their inhabitants had to move away to one of the bigger cities to find work. Water is life and nowhere is that more apparent than here where it is so rare. 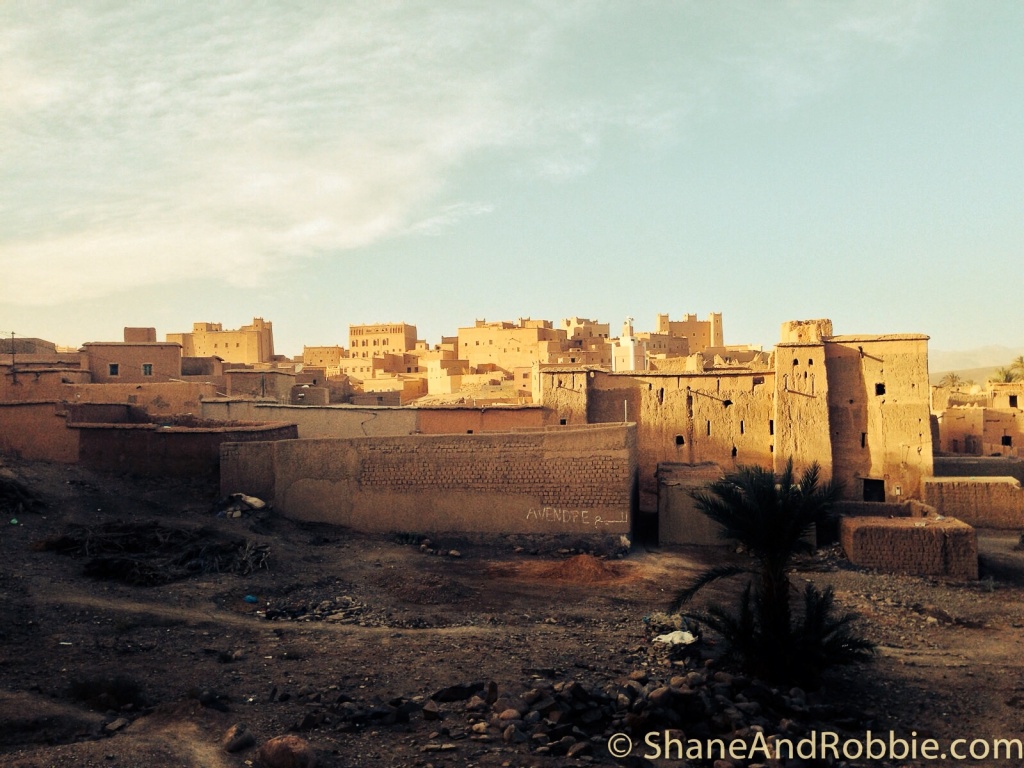 The drought-stricken village of N’Kob.

Dry and dusty now, these fields used to provide the villagers with precious vegetables and legumes for themselves and fodder for their animals.

N’Kob itself was dusty and looked a little worse for wear. This 300 year old ksar (translation = fortified village) used to have a population of around 1,300, but is home to just a few hundreds hardy souls now. The most amazing thing was seeing how well the mud and straw homes blend into the surrounding landscape – you wouldn’t even know the town was there if you weren’t looking for it!

The ksar of N’Kob is 300 years old. Some of the oldest fortifications are still standing, like this old watch tower.

The Berbers of this region belong to a tribal group known as the Ait Atta. These fierce, somewhat taciturn people, were the only tribe that successfully resisted French occupation in the early 20th century. In the 1930s the Ait Atta, led by their general Assou Oubasslam, fought against and defeated French troops seeking to bring this part of Morocco under French control. The heroic victory of the Ait Atta is legendary here in Morocco and is still a great source of pride for the locals. Today the Ait Atta live a semi-nomadic life, tending to their lands during the cooler months of the year and heading North into the Atlas Mountains in summer when temperatures in vilage slike N’Kob reach upwards of 50C. In summer they tend to their goats and sheep in the alpine pastures, living in khaïma (translation = traditional nomadic tents made of goat skin). It’s a way of life that is about as far from our modern, urbanised, Western lifestyle as you could imagine. In all honesty it left us a little shell shocked to see how hard life really is for people here. 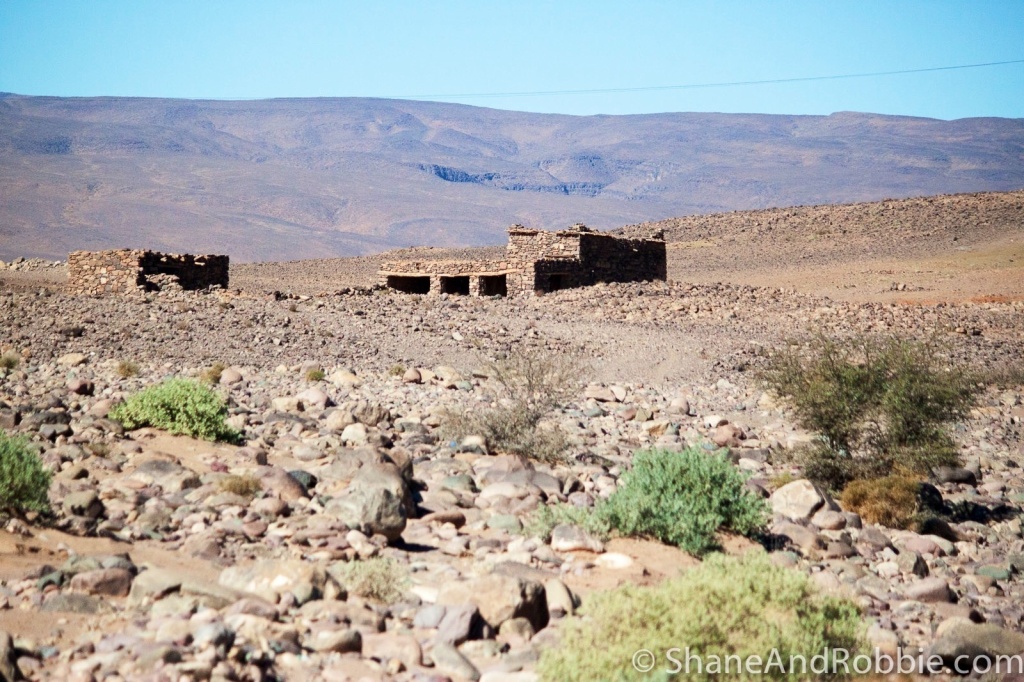 The Ait Atta tribe who live out here are a tough lot.

The Ait Atta still live a semi-nomadic lifestyle, spending many months of the year in tents like this up in the Atlas Mountains, tending to their animals in the high pastures and escaping the worst of the summer heat.

To top off our sense of shock we had a sandstorm blow through the village this afternoon as we were walking around. The wind whipped up and within minutes we were blinded by sand and trying desperately to keep it out of our mouths, ears and nostrils. Needless to say we were unsuccessful. It took 2 showers, lost of nose blowing and a whole lot of shaking out of our clothes to lose the “desert coat” we had acquired. It was nuts! The sand, the dry desert air, the scorhcing midday sun and the icy cold night temperatures are not much fun at all – we’re actually really glad to be heading West tomorrow towards the Atlantic coast where things will be greener, moister and a little easier for these 2 little cream puffs!