A tale of 2 kasbahs…

A kasbah is a typically Moroccon, earthen building surrounded by high defensive walls and protected by watch towers positioned at each of the four corners. These fortified structures can be immense, the size of a small village (like the kasbah of Rabat which covered hundreds of square metres and was built as a defensive fortification to protect the Moroccon King and his family), or just large enough to protect one (wealthy) family and their farm animals. Kasbahs are a key feature of the Moroccon landscape, in the South-Eastern parts of the country where warring Berber tribes were often at each other’s throats and defence was a primary concern for all. We visited a couple of Morocco’s most famous kasbahs on our drive through the Draa Valley today: the Mollywood* kasbah at Ouarzazate and the real thing at Ait Benhaddou.

*Ouarzazate is the centre of Morocco’s film industry, hence the “Mollywood” moniker. 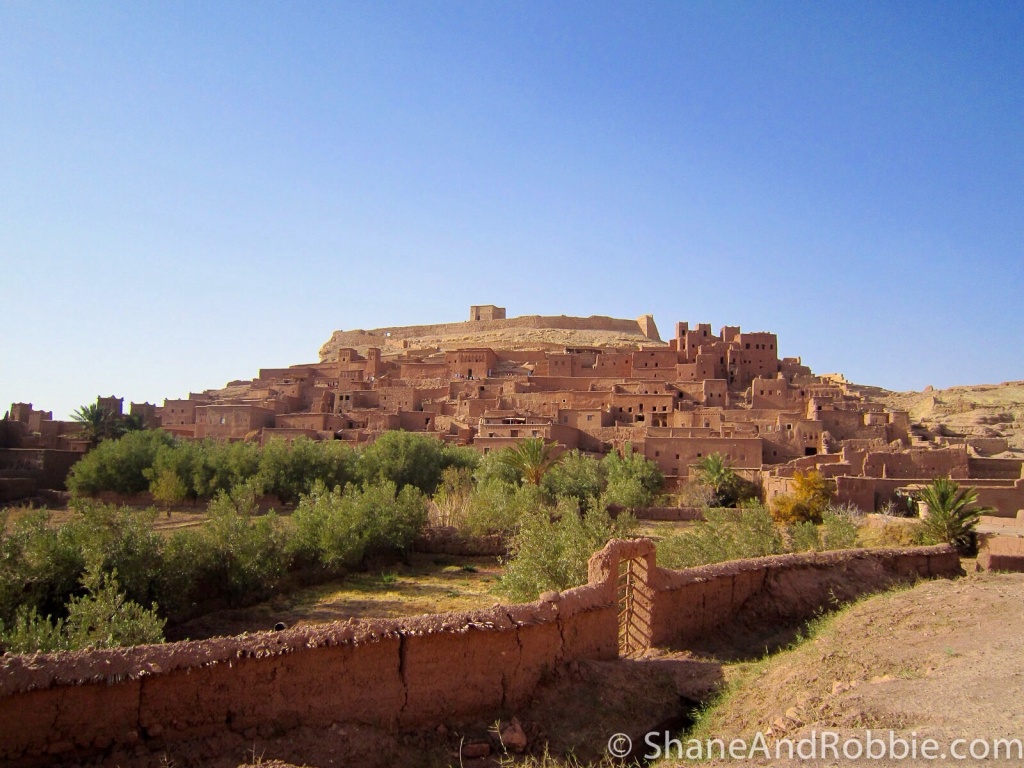 Exploring the kasbahs of Morocco’s heartland.

We left the Djebel Saghro and dusty N’Kob behind today, bound for the historical kasbah town of Ait Benhaddou and the Draa Valley. The Draa River is Morocco’s longest river (length about 1100 km) and the valley this wide river forms is the largest date palmery in the country. The water from the Draa is used to irrigate these palm groves and numerous small sclae farms, ensuring the survival of villages and towns in the valley. It was so nice leaving the dusty, desolate landscape of the Djebel  Saghro behind this morning – the green of the Draa Valley was such a welcome change after the seemingly unending expanse of rock and sand we saw over the last couple of days!

The welcome sight of the green Draa Valley.

We followed the course of the Draa River for a few hours, winding our way ever upwards towards the river’s source in the High Atlas Mountains. Around lunchtime we reached the town of Ouarzazate, Morocco’s modern movie capital. This bustling town of 80,000 inhabitants was once an important stop for traders on their way across the Sahara to the port towns of Northern Morocco. Today it is a noted film-making location, with Morocco’s biggest studios working with international companies to make movies like Lawrence of Arabia (1962), Cleopatra (1963), The Jewel of the Nile (1985), The Last Temptation of Christ (1988), Kundun (1997), The Mummy (1999), Gladiator (2000), Alexander (2004), Kingdom of Heaven (2005), Babel (2006), Prince of Persia (2010), and Salmon Fishing in the Yemen (2011). Part of the TV series Game of Thrones was also filmed in Ouarzazate. Many of the locals in the Ouarzazate/Mollywood area make a living as extras in movies, whilst others work as set creators, costume tailors and as support crew for the stars when they’re on site. There are movie studios and left-over movie sets all over town – including a couple of great, fake kasbahs!

Following the course of the Draa River all the way to Ouarzazate.

After an awesome kefte tagine lunch in Ouarzazate we went for a quick tour through one of the studios, where remnants of movie sets sat alongside antiquated film-making equipment and autographed photos of movie stars. It was hilarious seeing how fake movie sets really are! Entire rooms made of spray-painted foam blocks, fake marble painted onto thin plywood walls, and torture chambers with plastic chains. We concluded that every movie ever made that was supposedly set in Egypt was actually set in Morocco, as were many “Wild West” and historical Roman-era movies. It was all very amusing and entertaining.

Amusing ourselves on set at Ouarzazate (aka Mollywood).

From Ouarzazate we continued up into the High Atlas Mountains, still following the course of the Draa River until we reached Morocco’s best preserved REAL kasbah: Ait Benhaddou*.  Located in the foothills on the Southern side of the High Atlas Mountains, Ait Benhaddou is the most famous kasbah in Morocco. This village-sized fortification has been a UNESCO World Heritage Site since 1987 and is one of the country’s most visited historical areas; in fact, for the first time in days we actually saw other tourists!

The houses within the protected village were themselves like mini-fortresses, with narrow window slits facing outwards and high, impenetrable walls.

Ait Benhaddou is built on the protected side of a hill, with the Draa River at its base. Surrounded by date palms and fields of vegetables and lucerne, the kasbah was very picturesque. Inside the fortress, the houses were built very close together, with externally-facing windows little more than slits – just wide enough for a bow and arrow or gun.

The kasbah was surrounded by green fields of lucerne and vegetables, and date palms.

We climbed through the kasbah all the way to the top, where the town’s granary stood in the most protected position. The view from the top was great – we could see for miles around in every direction. No doubt this afforded the inhabitants of this area a good view of potential attackers well before they were within range, giving the villagers time to get inside the kasbah and bar the main gate. 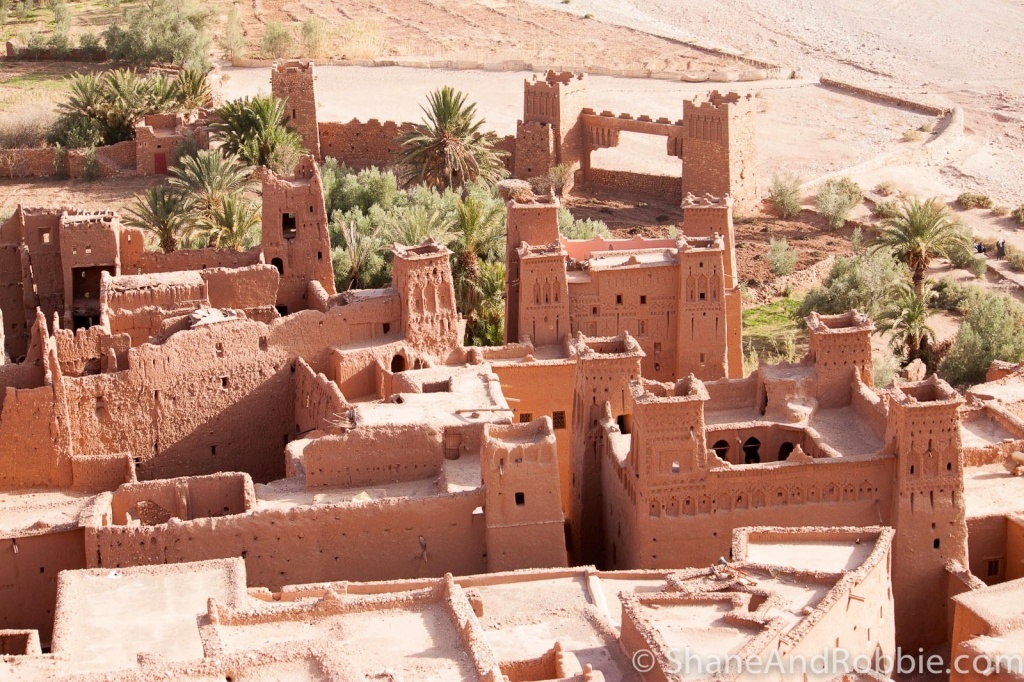 The view back down into Ait Benhaddou from the the top of the hill.

The hill-top view was impressive, with everything for miles in every direction clearly visible.

During our walk through Ait Benhaddou we came across an elderly gentlemen playing a gunbri. This traditional Berber stringed instrument is very simple in design but made a lovely sound. We stopped and spoke the musician (via Tariq our guide who translated for us), asking him about his instrument and his music. Turns out he is the last gunbri player left in the area – the instrument has gone out of fashion with younger musicians preferring modern guitars. He learnt to play the instrument from his father and uses it to play the Gnawan music of his ancestors. Very cool.

A man and his gunbri play Gnawa music. Gnawa music was developed by the Sub-Saharan slaves brought to Morocco during the 17th and 18th centuries. It’s rhythms are unique and more characteristic of West African music than North African or Arabic tunes.

It was really interesting seeing the kasbah of Ait Benhaddou and exploring its streets. The oldest constructions in Ait Banhaddou date back to the 17th century, with extensive renovations carried out on many of the homes within the kasbah. Some of these have been bought by European, British and/or American investors and converted into hotels, which has lessened the authentic feel of the place a little but at least ensures the ongoing protection of this 400 year old kasbah. Our abode for the night is one of these converted adobe homes, fitted with all the mod cons, including electricity, running water, sewerage and heating. Very flash!

Renovated in style: our hotel for the night is a restored 17th century Berber adobe home.

Tomorrow we continue up into the High Atlas Mountains and cross through the N’Tichka Pass, heading towards the Atlantic Ocean. We’ll be spending a couple of days there, enjoying the sea breezes and just relaxing before moving on to Marrakech – our final stop in Morocco. Can’t believe our 3 weeks in this marvellous country is almost up!