Today we went trekking through Daisetsuzan National Park, Japan’s largest national park. This rocky, volcanic region lies at the heart of Hokkaido and is one of the last untouched wildernesses in Japan. It’s wild, rugged and incredibly beautiful – as we found out today.

The mountainous wilderness of Daisetsuzan National Park covers an area of over 2,200 square kilometers and includes 16 peaks over 2,000m in height – many of them active volcanos. Daisetsuzan is home to many of Japan’s remaining wild brown bears, as well as deer, foxes, squirrels, chipmunks and pikas*. Most of the park is densely forested and uninhabited, though there are a few villages around the park’s perimeter that provide access into the wilderness. One of these villages is Asahidake Onsen, which is where we went today.

*Pikas, as we discovered today, are small critters related to rabbits that look a bit like a cross between a mouse and a hamster. They’re about the size of a squirrel, live up in the rocky alpine regions of Japan and are seriously cute. 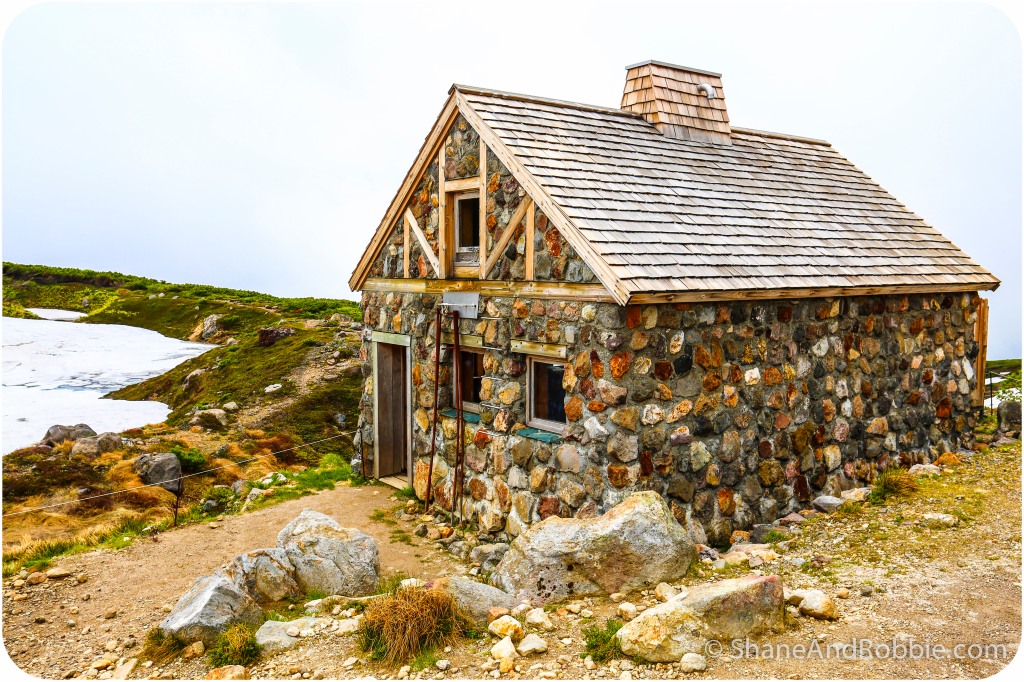 To reach the tiny village of Asahidake Onsen we had to catch a bus from outside the train station here in Asahikawa and then spend 1.5 hours winding our way through the narrow roads, up into the mountains of Daisetsuzan. The main appeal of Asahidake Onsen is that, as well as being accessible by public transport, there’s a cable car (or “ropeway” as they’re known here in Japan) in the village which can take you up (or down) Mt Asahidake (2,290m). In winter the village is a haven for snow boarders and people looking for uncrowded snow access, and in summer it’s popular with hikers and mountaineers keen to scale the heights on Mt Asahidake.

When we reached Asahidake Onsen we realised that calling it a “village” is a bit of a misnomer; it’s really just 4 ski hotels and a youth hostel clustered around the cable car station. Luckily we brought lots of water and food with us because there isn’t much there! Our original plan had been to hike up from the village to the top of the mountain, have a picnic lunch at the top, and then catch the cable car back down. However, we discovered that everything above 1,600m is still covered in a fair bit of snow, so the path up to the top of the mountain route is all but closed and certainly not suitable for amateurs like us. Additionally the path from the village to the top of the cable car station had been closed due to a bear* sighting! That didn’t leave us with many options except to catch the cabe car up, do the short walk around the top station (which sits at 1,600m), and then come back down. Not quite the epic trek we had envisioned, but at least we still got to see some of the national park!

*The brown bears found in Hokkaido are much larger and more aggressive than the smaller black bears found further South. They are, apparently, not to be messed with and all the Japanese people we came across today at Daisetsuzan had “bear bells” attached to their packs. The noise is supposed to let the bears know you’re coming and scare them off. We need bear bells! 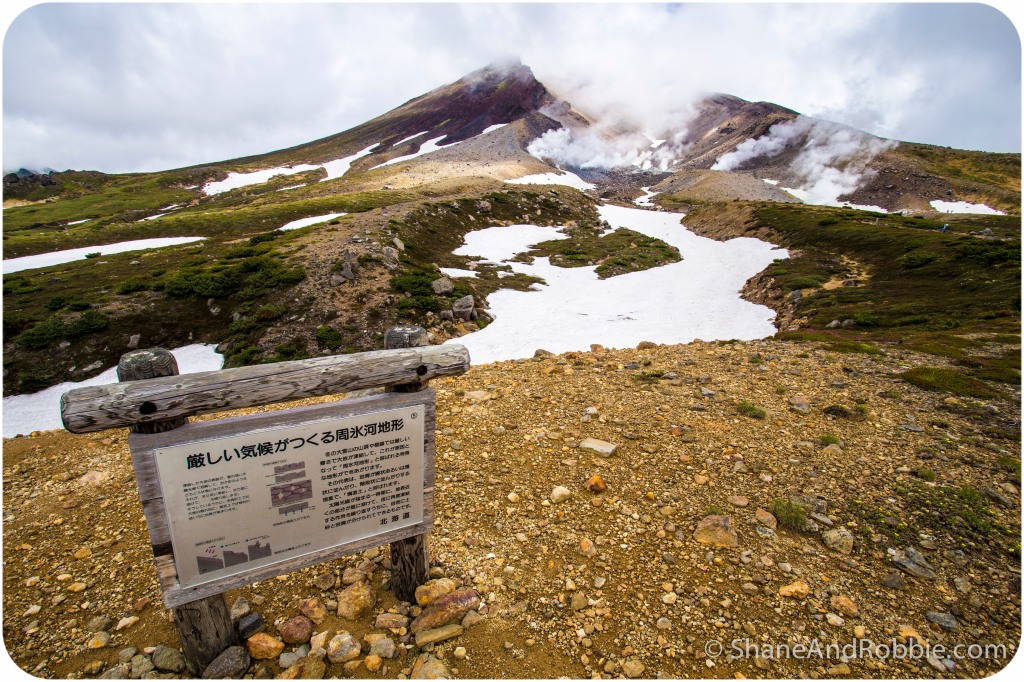 The cable car ride up was quick and smooth and we were quickly deposited, along with about 10 elderly Japanese couples*, at the top. As soon as we stepped out of the cable car we were greeted by the stench of sulforous fumes and an unearthly landscape of snow, volcanic vents and treeless alpine tundra. It really was an incredible vista – unique and a little scary in its ruggedness and inhospitability, but beautiful.

*Elderly Japanese people do A LOT of hiking we discovered; and many of them are seriously fit. It’s quite embarassing to be puffing and panting your way up a mountain, only to have a couple of 75 year old Japanese people pass you, looking all spry and relaxed. Not sure what their secret is, but it indubitably involves sleeping on stupidly firm futon mattresses, using squat toilets your whole life, eating a lot of weird seafood, and drinking gallons of green tea. 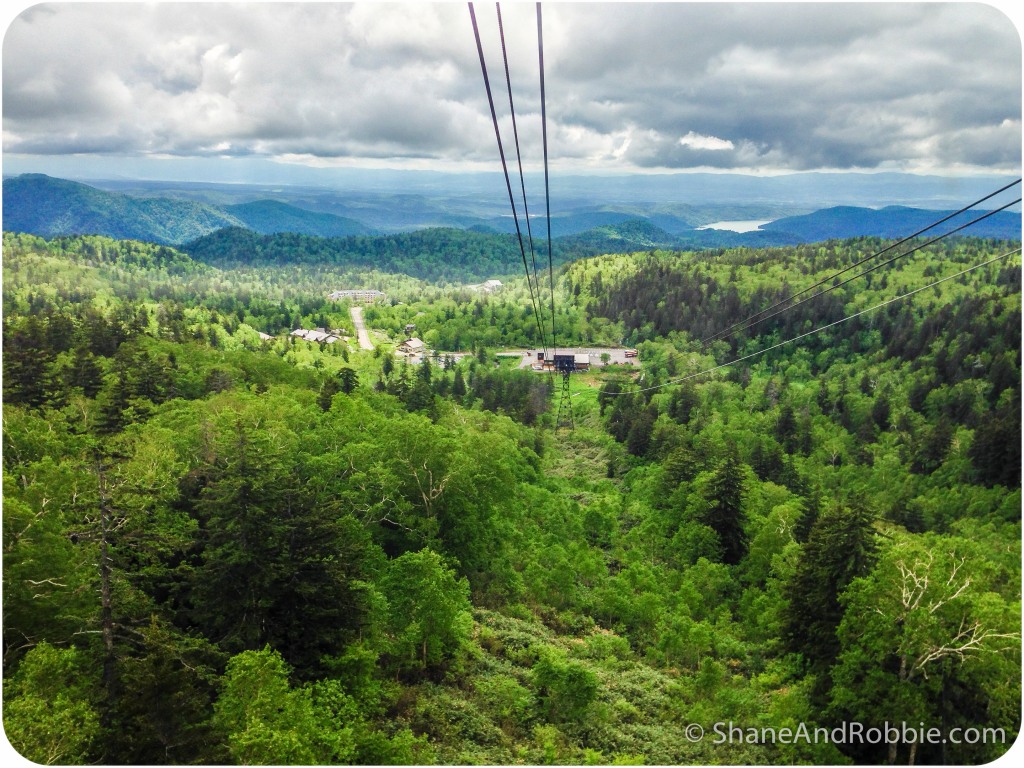 The short walk that we did took us up from the cable car station to about 1,800m and then back down. We passed a number of ponds which, when they’re not frozen, are supposed to reflect Mt Asahidake perfectly. 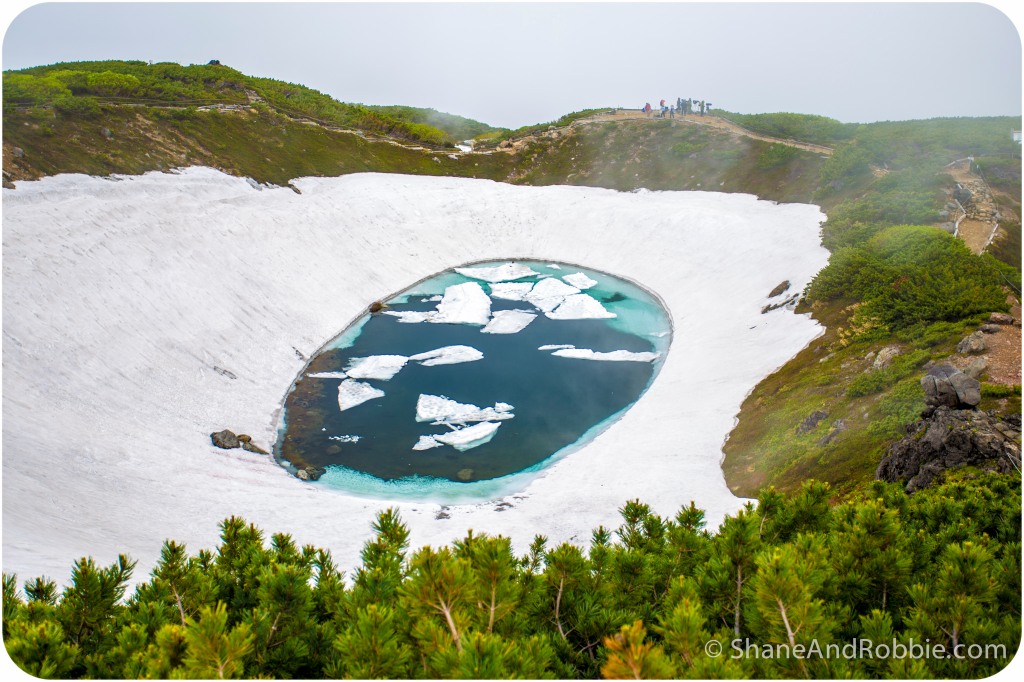 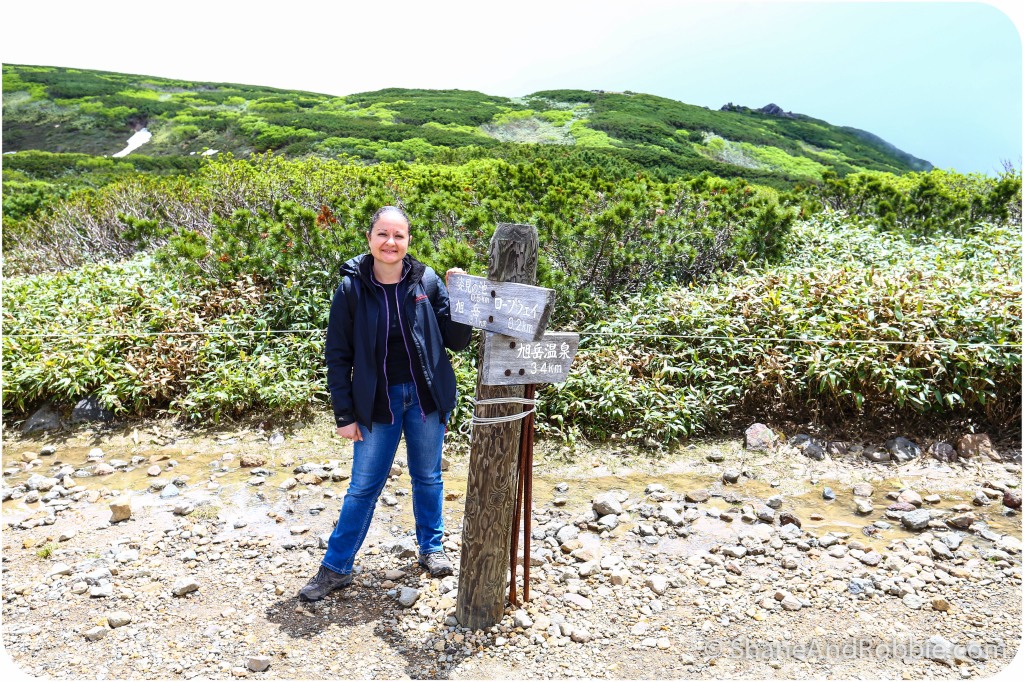 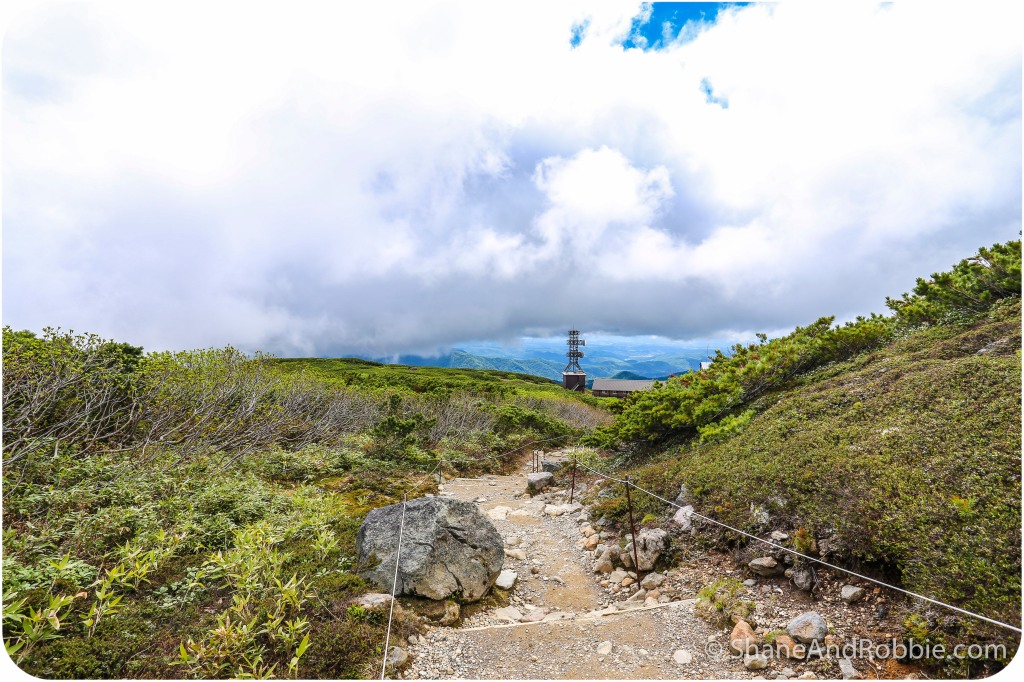 The walk also took us through fields of alpine flowers, many of them still opening. Some of these flowers look so small and fragile you wonder how they survive in the cold, harsh conditions up there.

There was still a lot of snow around but we managed to slide and slip our way through that without too much trouble. What we couldn’t avoid, however, was the smell of the hot sulforous steam that was billowing out of the ground. It was amazing to see the force the gases were pushed out with, and to hear the sounds they made as they gushed out. It was also a bit scary to think that, just below our feet, there was an active volcano bubbling away! 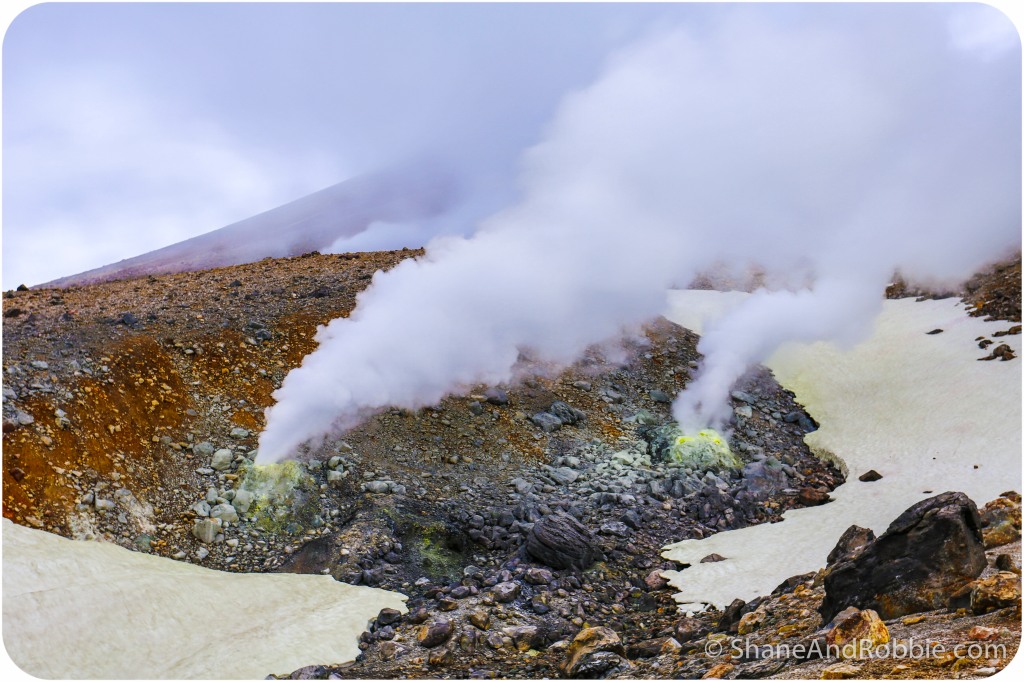 After our short walk we had our picnic overlooking the steam vents and pretended the smell was just someone cooking eggs somewhere. We then caught the cable car back down to the village and headed back to Asahikawa where yet another adventure awaited us: dinner at the local Genghis restaurant! Here in Asahikawa a Genghis is basically a Mongolian grill, where a small BBQ is placed on your table and you get served veggies and strips of thinly sliced meat (usually lamb) to grill. It was awesome! So much fun to be had in Japan…