Another visit to Daisetsuzan National Park

We were so impressed by the epic scenery we saw around Asahidake Onsen yesterday that we wanted to see more of Daisetsuzan National Park. So today we headed off to Sounkyo Onsen, another tiny hot springs resort on the fringes of the park famous for its waterfalls, glorious scenery and ramen noodles. Best of all there’s a cable car at Sounkyo Onsen that takes you 1,500m up Mt Kuradake, so, of course, we had to go!

Being a Sunday nothing was open for breakfast this morning so we opted for The Breakfast of Champions (Japan style): a convenience store* breakfast! Thusly fuelled we were ready for a day of trekking and adventuring….

*Convenience stores (e.g. 7-Eleven, Lawson’s, SeicoMart) are an institution here in Japan – there’s one on just about every corner in the cities and at least one or two in most towns. We LOVE them because they all carry a great selection of easy food options, from premade sandwiches, sushi and salads, to hard boiled eggs, fruit, yoghurt and even premixed Starbucks coffee (cold)! We’ve had many convenience store meals during our time in Japan and whilst they may not be exciting, they’re always cheap and easy.

Sounkyo Onsen is situated on the Northern side of Daisetsuzan National Park, about 1.5 hours from Asahikawa by public transport. The first part of the journey involved catching a local train to the nearby town of Kamikawa. This “local train” was one of the cutest little things we’ve ever seen – just a single carriage with seats for 30 people, a toilet in the closet down the back and the driver up the front. We had the train almost entirely to ourselves for a lot of the journey too. Guess it’snot quite peak tourist season up here yet! 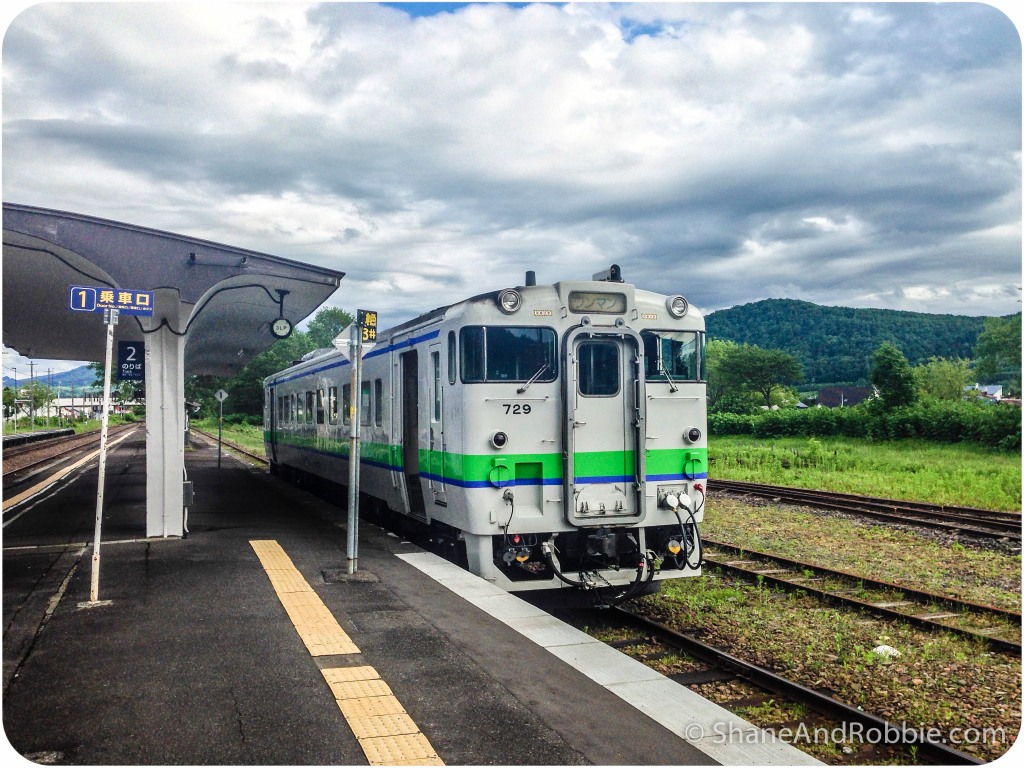 The views from the train were gorgeous – more of the farmland, rice paddies and rural villages we’ve been seeing throughout this trip. 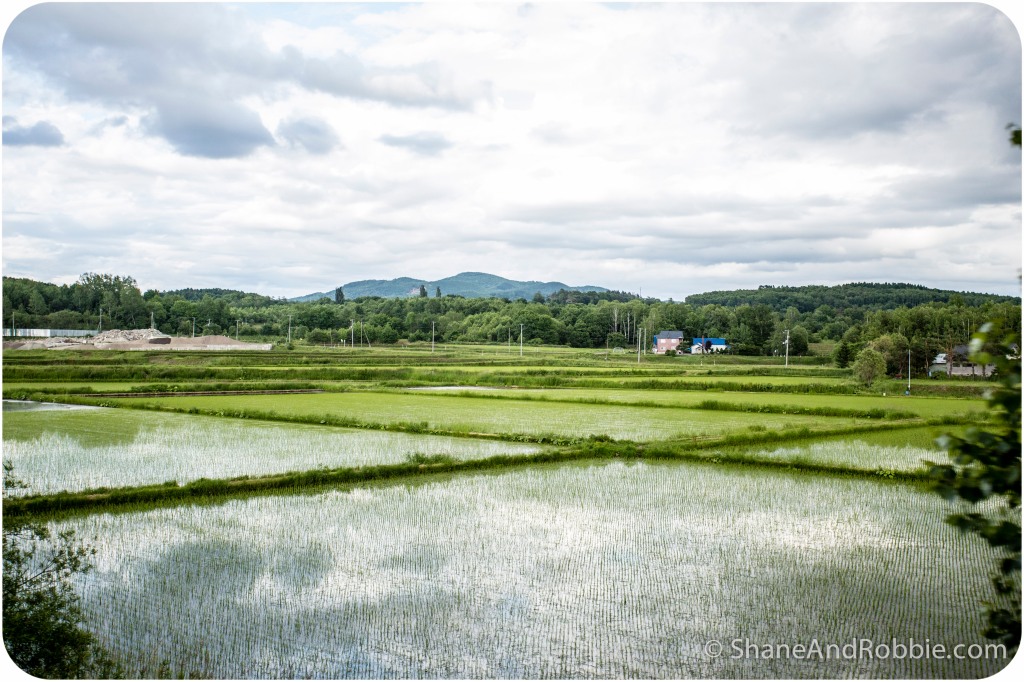 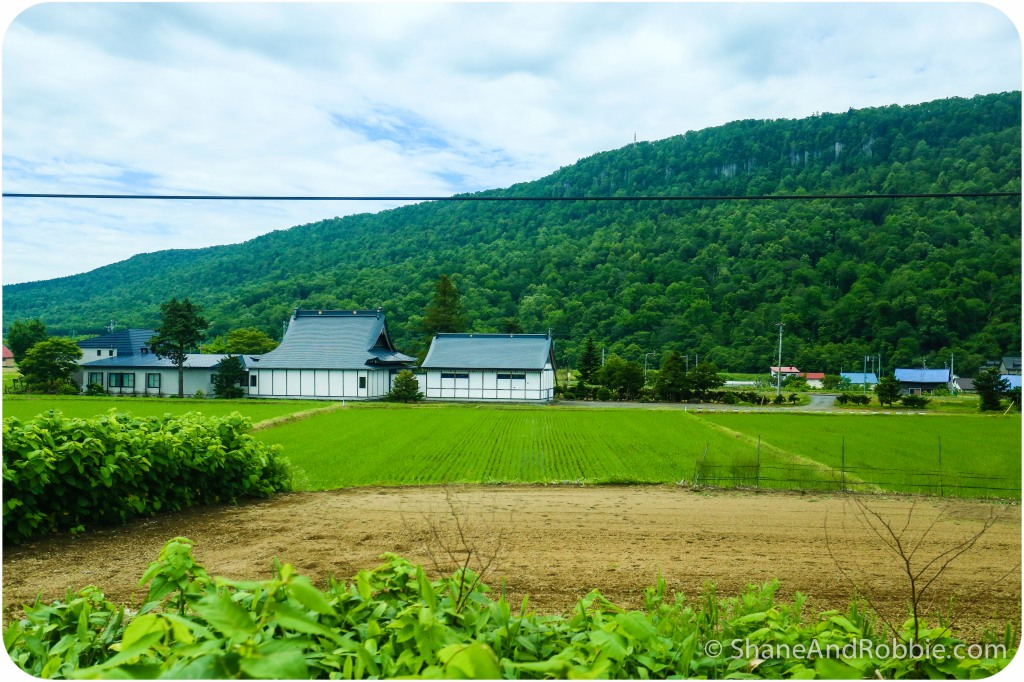 Once in Kamikawa we swapped to a local bus that drove us alongside the Ishikari River for just over half an hour, all the way into the Sounkyo Gorge and into the village of Sounkyo Onsen. Like Asahidake Onsen, the village we visited yesterday, Sounkyo Onsen is a ski village in winter and a hiker’s paradise in summer. It’s located within the folds of the Sounkyo Gorge, just at the base of Mt Kuradake (1,985m), and is surrounded by ragged steep cliffs, thick forest and waterfalls of crystal clear mountain water*.

*Not that you should drink the water – no matter how clean it seems. Turns out the water in Daisetsuzan is unfit for human consumption as it’s full of echincoccus (a type of tapeworm). This infectious parasite gets into the water through the faeces of foxes and other carnivores (e.g. bears) and if you’re unlucky enough to get it into your system you can end up with cysts in your brain, liver, lungs and other organs. The worst part is that you usualy don’t even know you’ve been infected – most people are asymptomatic for years and only find out they were exposed when the cysts start causing widespread organ damage. Eeeeeeewwww…. 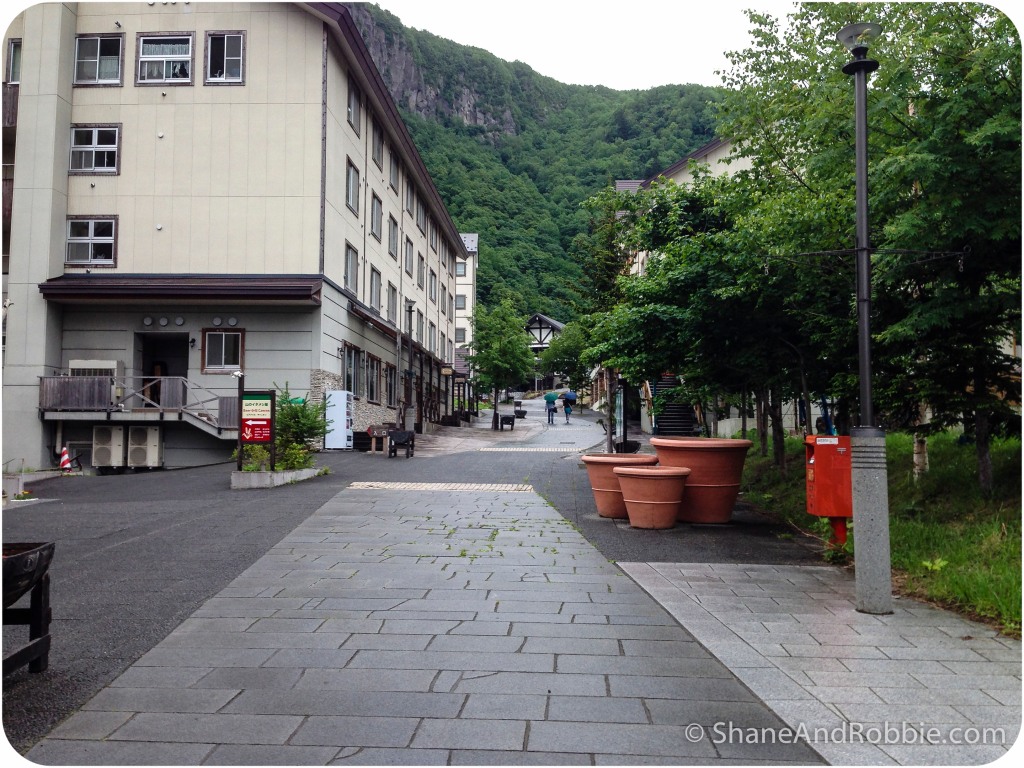 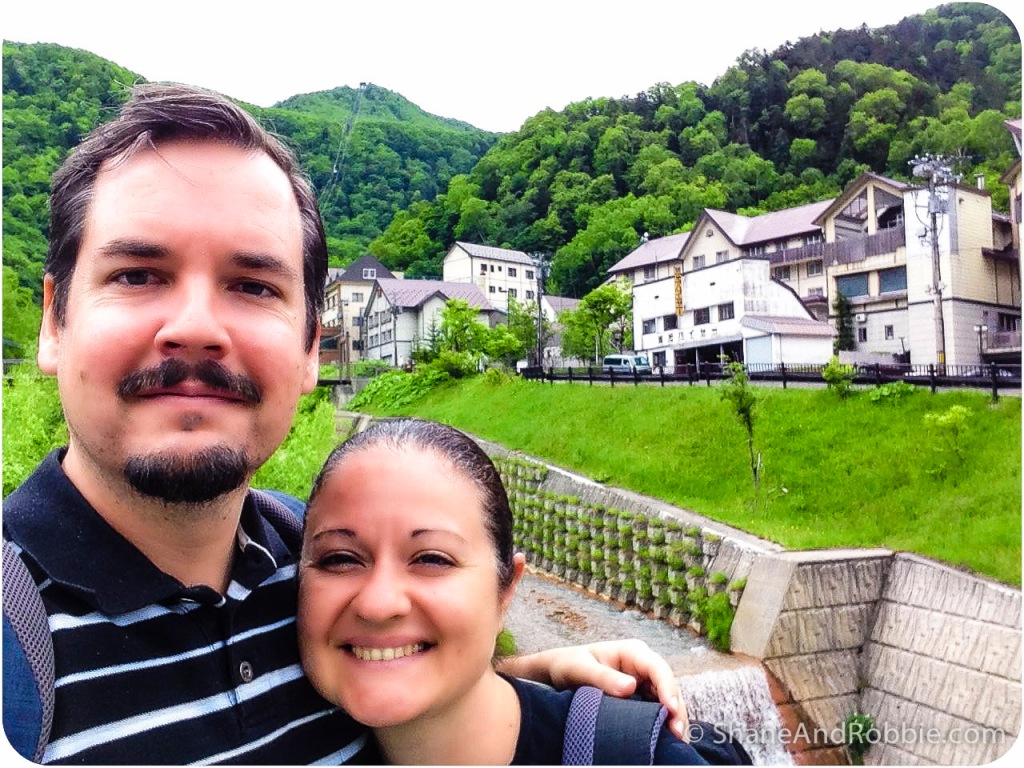 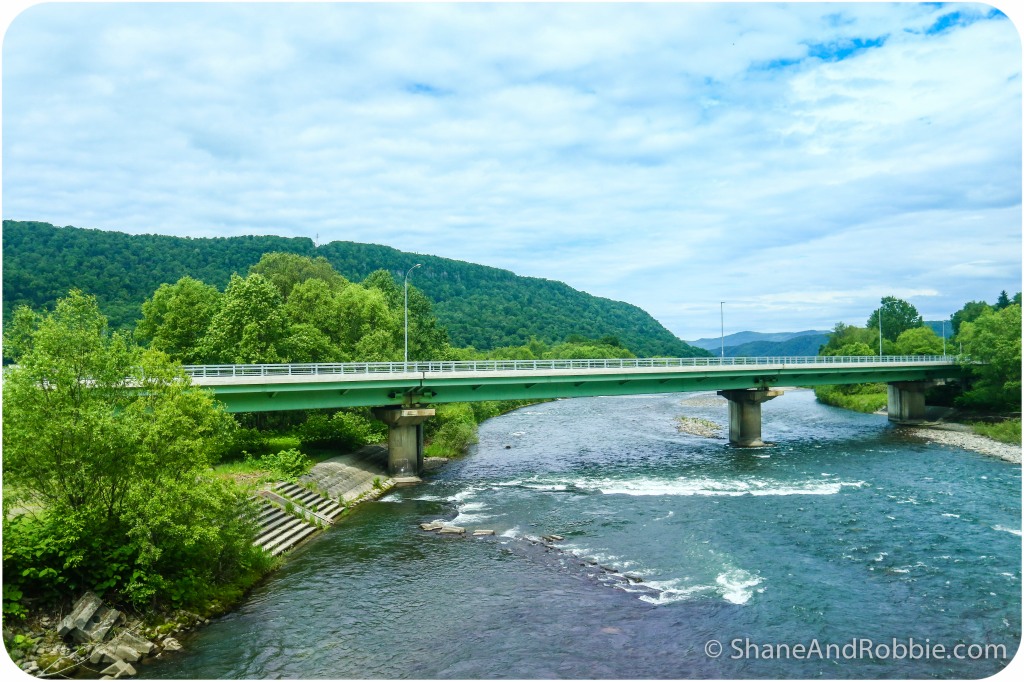 First on the agenda when we got to Sounkyo Onsen was to catch the cable car up and do some trekking up high. The views from the cable car summit station, looking back down into the gorge, were breath-taking. This side of Daisetsuzan is just as green and lush as the Southern side we saw yesterday, though a little less overtly volcanic. 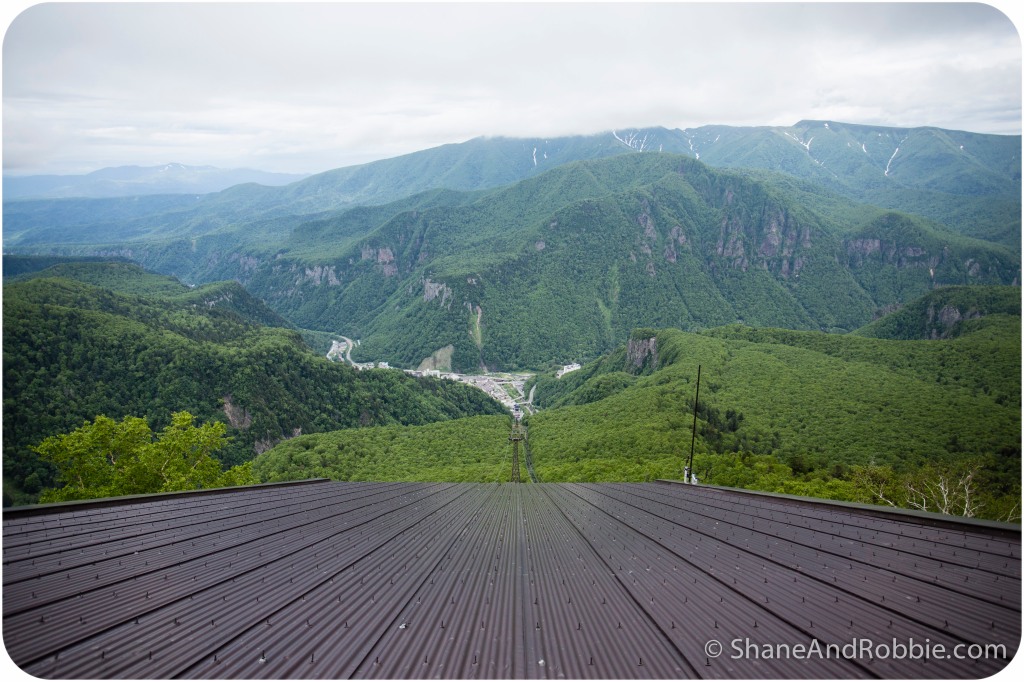 As we trekked through the forest at around 1,500m we came across lots and lots of pretty flowers, all just beginning to bloom. With the flowers came lots and lots of bees, bumble bees and other mushi (translation = bugs) too. We even stumbled across a small snake, trying desperately to warm itself up in the patchy sunshine.

The term “sounkyo” means “cloudy gorge” in Japanese, so we expected to have some clouds around today. Luckily we got a few bursts of sunshine, in between periods of cloud and drizzle. At one point the heavens well and truly opened up on us, but luckily we had all our wet weather gear so no one ended up with wet socks or damp underpants (never fun).

Unfortunately it was way too couldy and wet to go all the way to the top of Mt Kuradake though, so we hopped back on the cable car after our short walk around and headed back down to seek out some of the waterfalls in and around the village. The views up towards the cliffs was pretty impressive, and as alwasy the green of forests here in Japan was captivating. We just don’t get that kind of vivid GREEN in Aus! 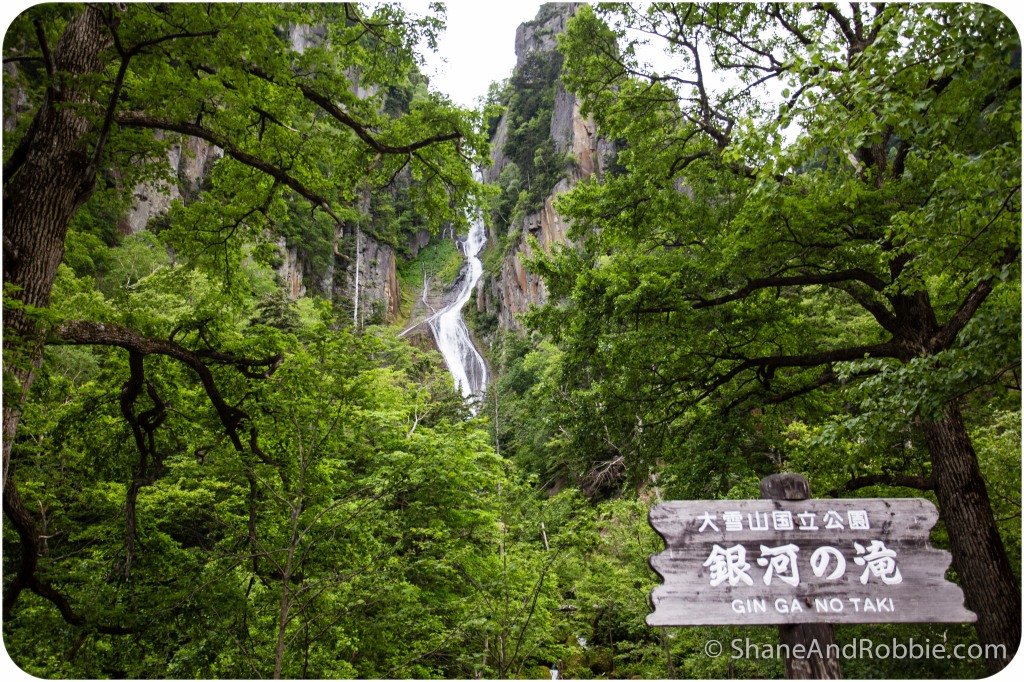 Once our feet had had enough we headed back to Sounkyo Onsen for a bowl of hot, tasty ramen noodles. The speciality in this region is ramen noodles served in a mixed seafood and pork broth* with seaweed, corn and a pickled plum as an accompaniment. May not sound that great but it was DELICIOUS. Mmmmm…, hot ramen on a cold day – what’s not to love??

*Ramen is basically noodles in hot soup, but with endless variations possible, depending on the type of noodles used, the broth they’re cooked and served in (usually miso soup, or broth made from chicken, pork or seafood), and the accompaniments.

From there it was time to head home again. And now, one warm shower and a change of clothes later, we’re about to head out for our final night in this bustling metropolis. Tune in tomorrow to find out where we’re off to next! 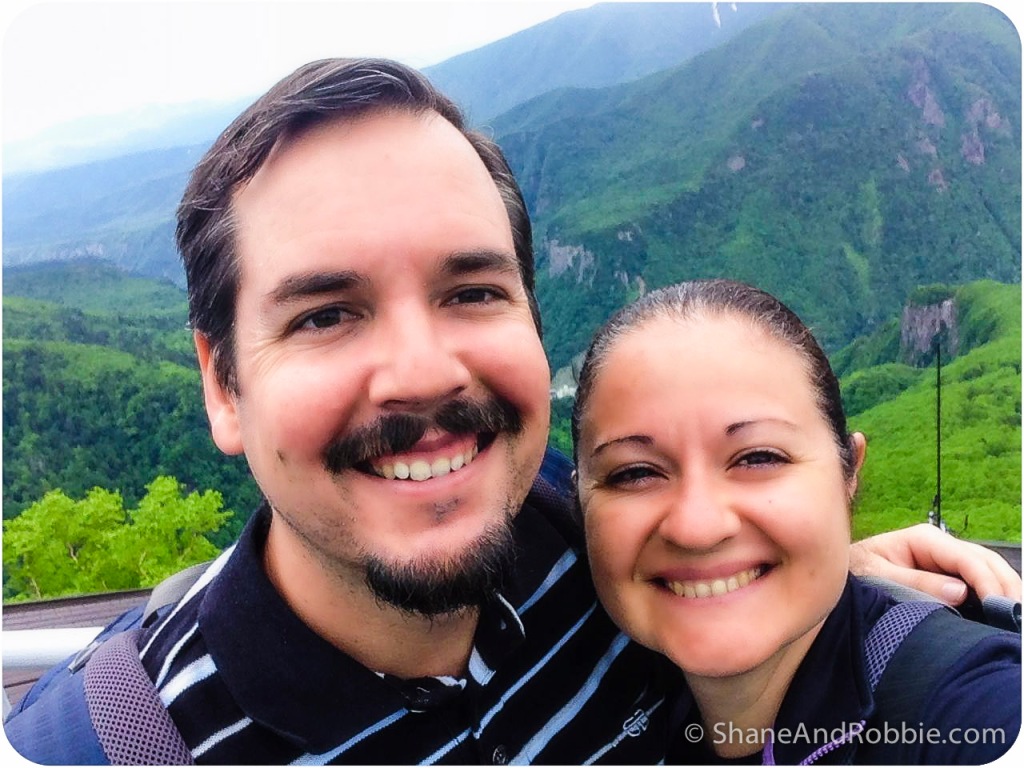