It seems the sunny spring weather we ordered went astray…. We woke this morning to cloudy skies, drizzle and temperatures barely above freezing (it was exactly 4 degrees Celsius here this morning). Seems a large front of cold, wet weather has just hit Japan and we’re in for a few days of this sort of thing. Ah well – that’s the reality of travel right? Sometimes you get glorious sunny days, sometimes you get this…. 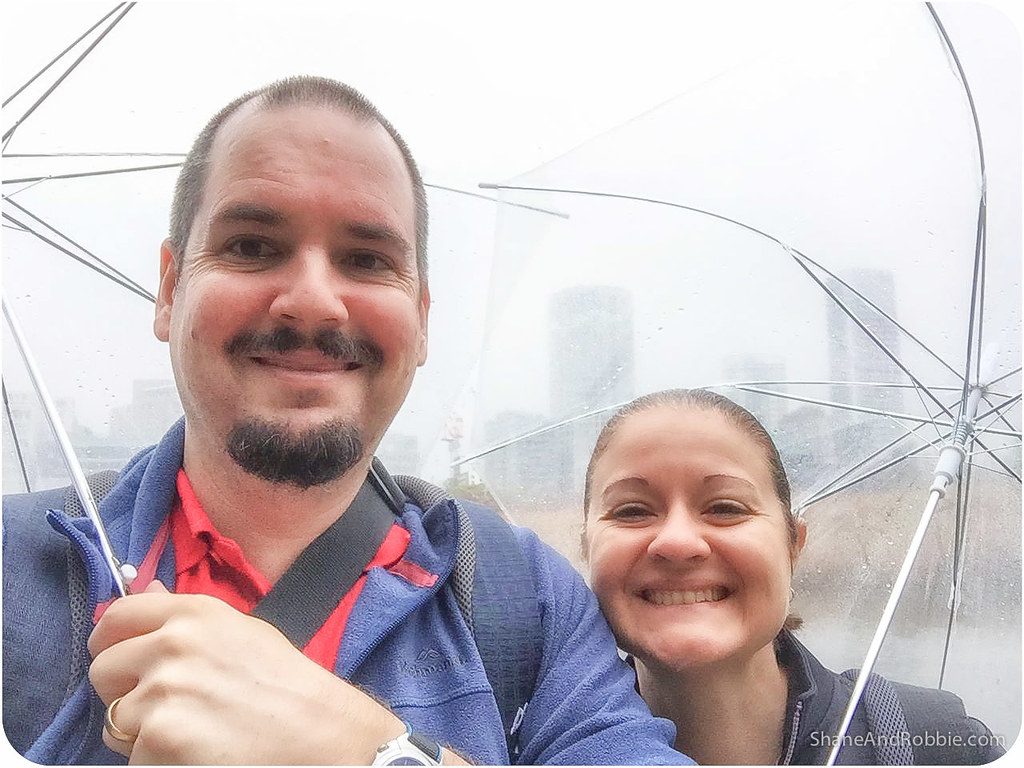 There’s only one way to start the day when it’s cold and rainy: a hot cup of coffee and a breakfast sando (i.e. traditional Japanese breakfast sandwich). So we sought out the nearest Doutor* and went from there.
*Doutor is a local coffee franchise that serves our favourite Japanese-style Breakfast of Champions: weak, milky coffee and ham and cheese sandwiches. This isn’t very Japanese, we know, but we find the various types of fishy noodles and soups that are on offer for breakfast in more traditional establishments do not go down well first thing in the morning.

After breakfast we caught the subway from Shinjuku to Ueno, one of Tokyo’s outer suburban areas famous for its museums, temples and old cemetery. Now, for anyone considering coming to Tokyo and catching the subway, a word of warning: don’t do it during rush hour. Shinjuku station is one of the world’s busiest, with more than 3 million people catching trains in and out of here each day. And despite the fact that trains leave every 30 seconds, they get seriously packed. Inconceivably packed. 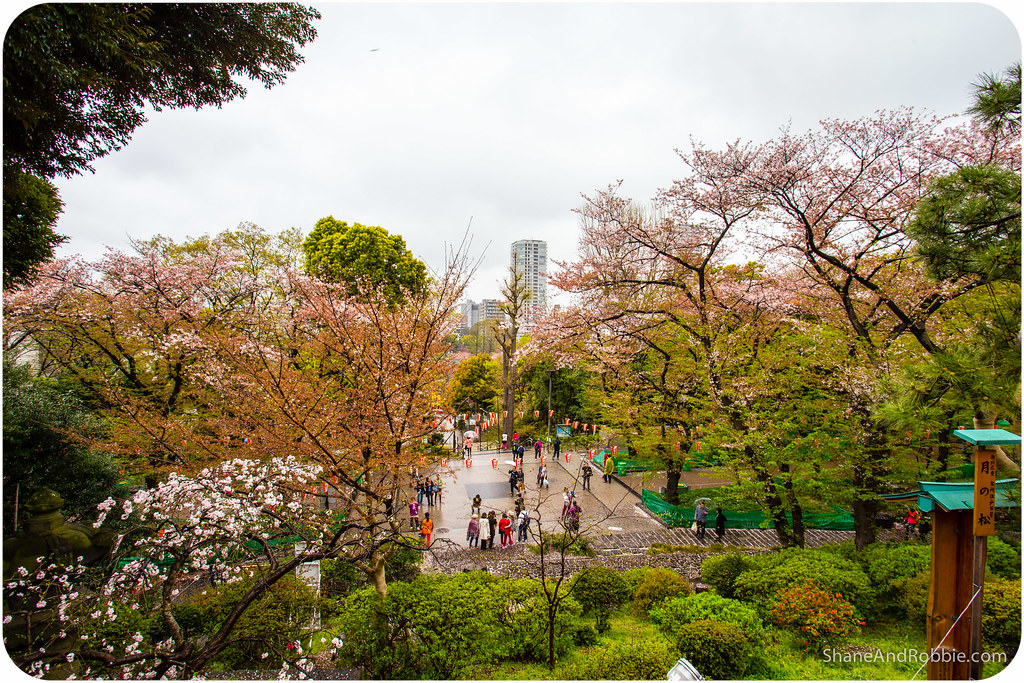 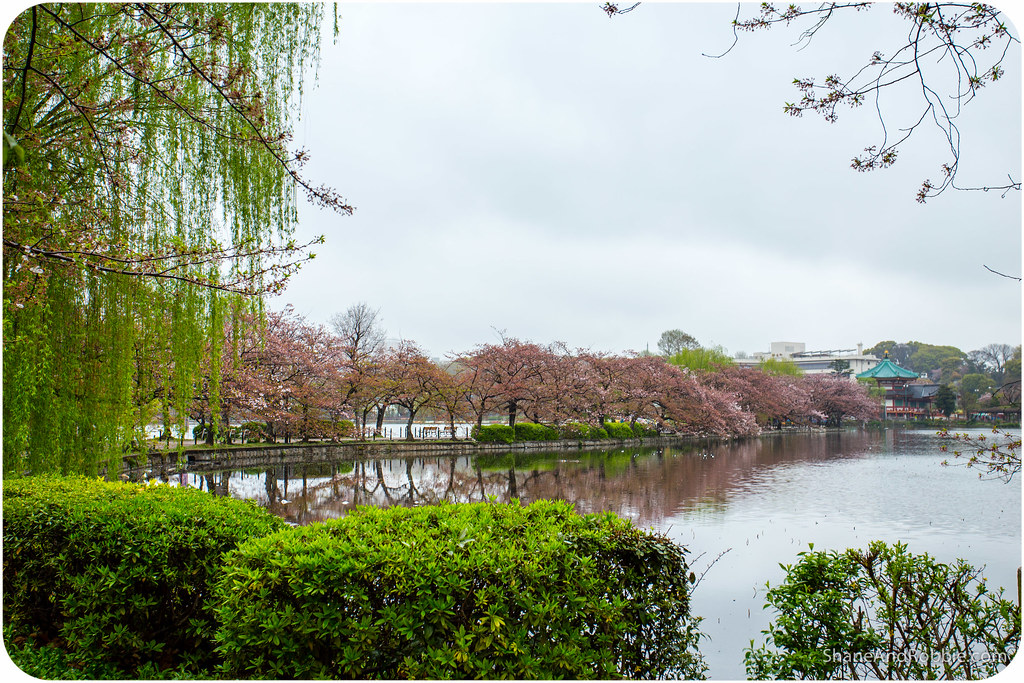 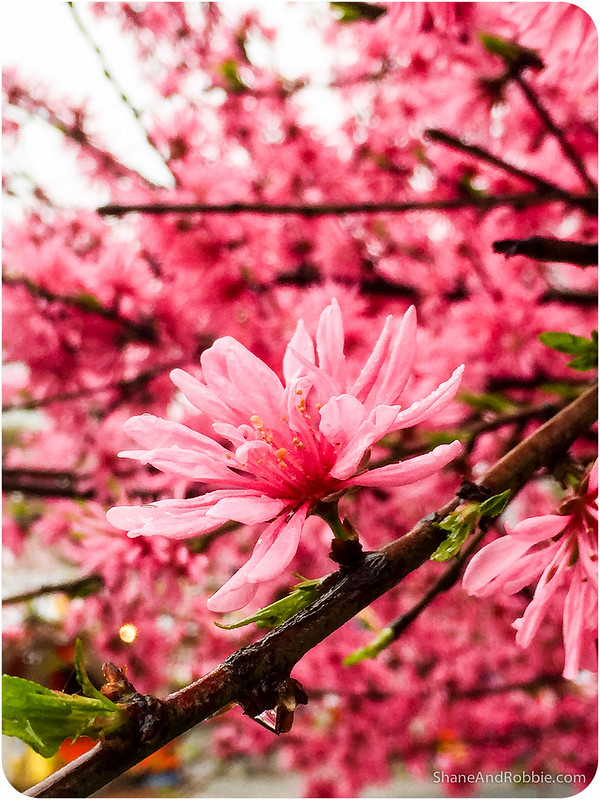 Ueno Park is a large public green space in Tokyo’s North-East that houses some of this city’s finest cultural sites, including the Tokyo National Museum, the Japanese National Museum of Art, and the National Museum of Nature and Science. It’s also another favourite amongst those who enjoy spring-time flower viewing (e.g. us). Even in the rain, the cherry blossoms were beautiful and we happily spent a couple of hours strolling around the ponds and through the park. 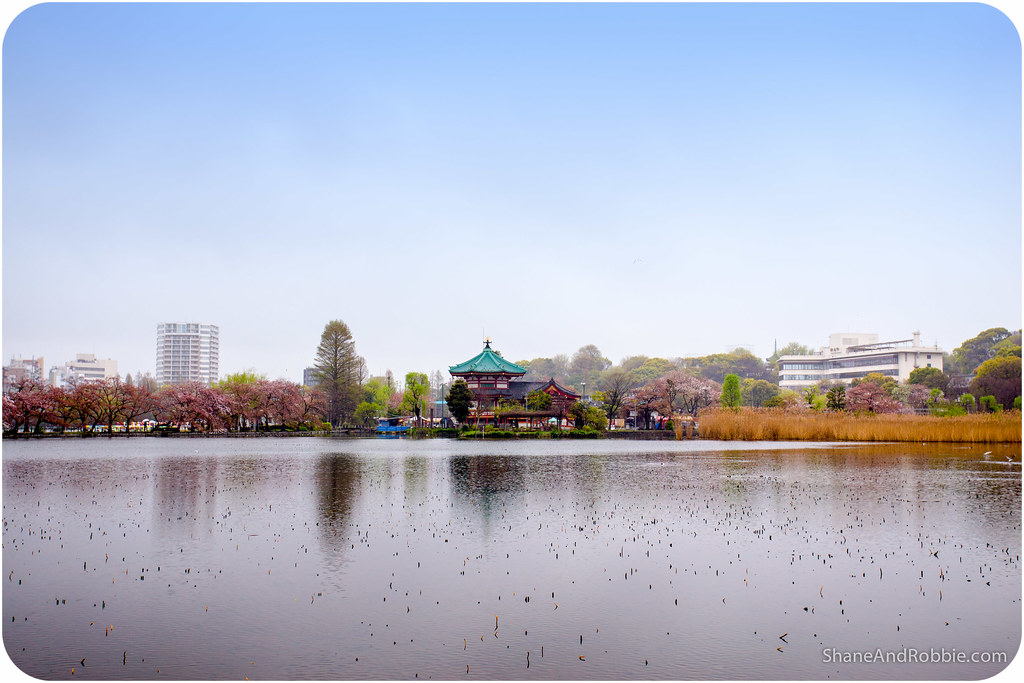 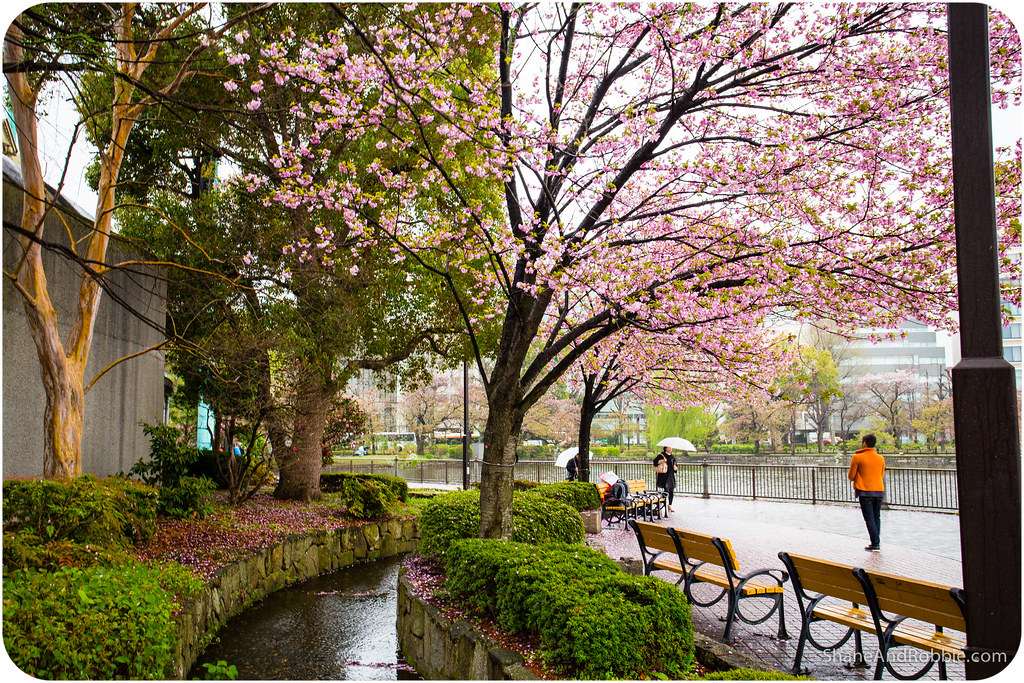 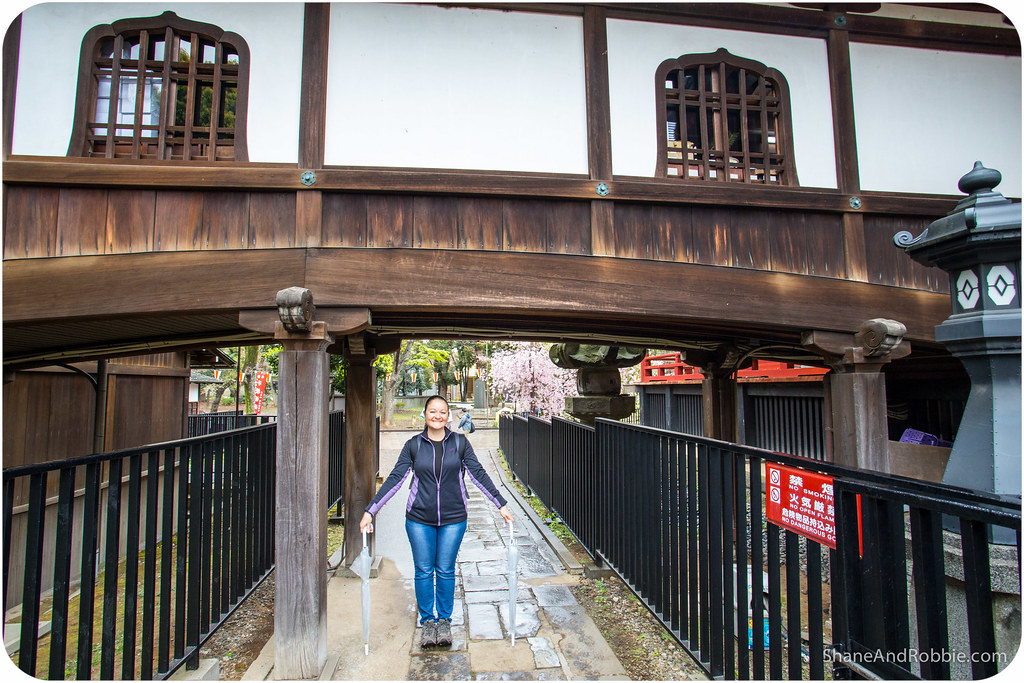 In and around Ueno Park there are also a number of Buddhist temples, which we also visited. The first temple we saw was the Bentendō temple dedicated to the goddess Benzaiten, goddess of wealth, happiness, wisdom and music. Because the goddess was originally the personification of a river, Bentendō often stand next to some source of water, in this case a pond. 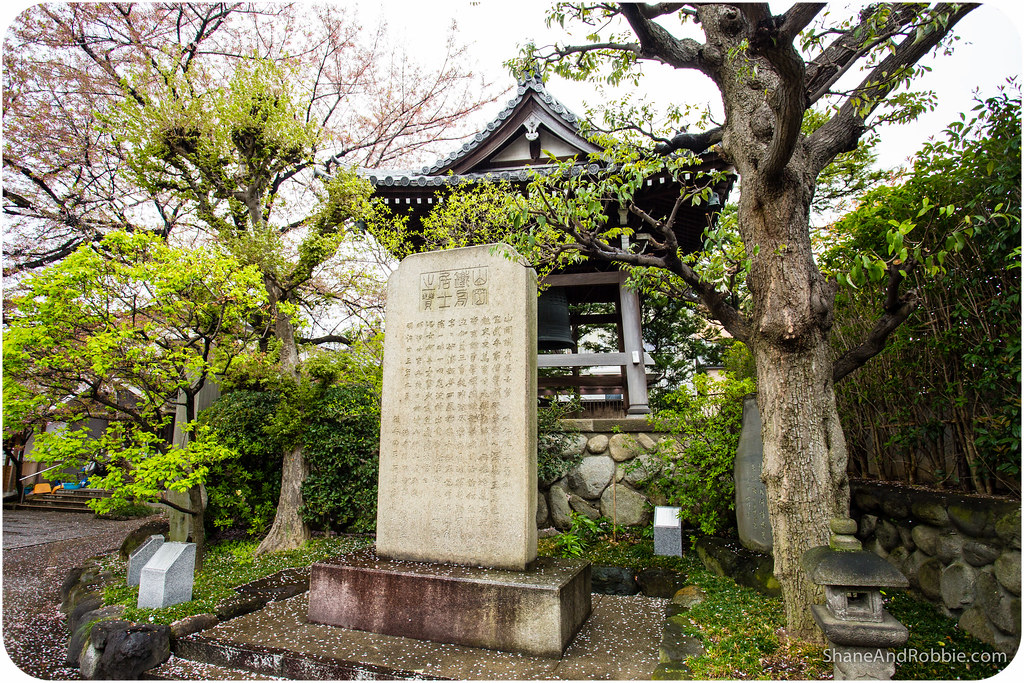 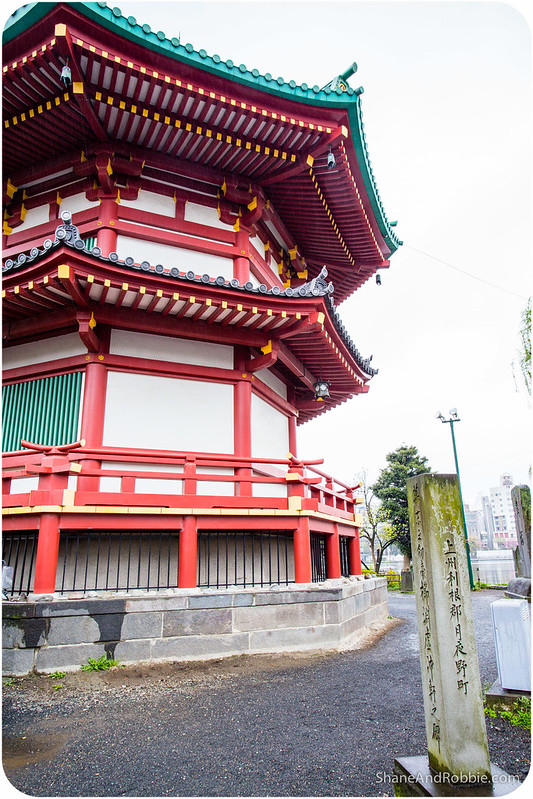 Next was the Kaneiji Temple, built in the 17th century by the Tokugawa shoguns and home to an image of Kosodate Kannon, the goddess of conception. Unsurprisingly this temple is particularly popular among women hoping to have children; we even saw a few women buying and attaching o-mikuji* to the board outside the temple.

*O-mikuji are the little strips of paper with fortunes or prediction written on them that Buddhist temple-goers here in Japan buy and then leave tied somewhere around the temple for good luck and to help ensure their wishes/prayers are answered. 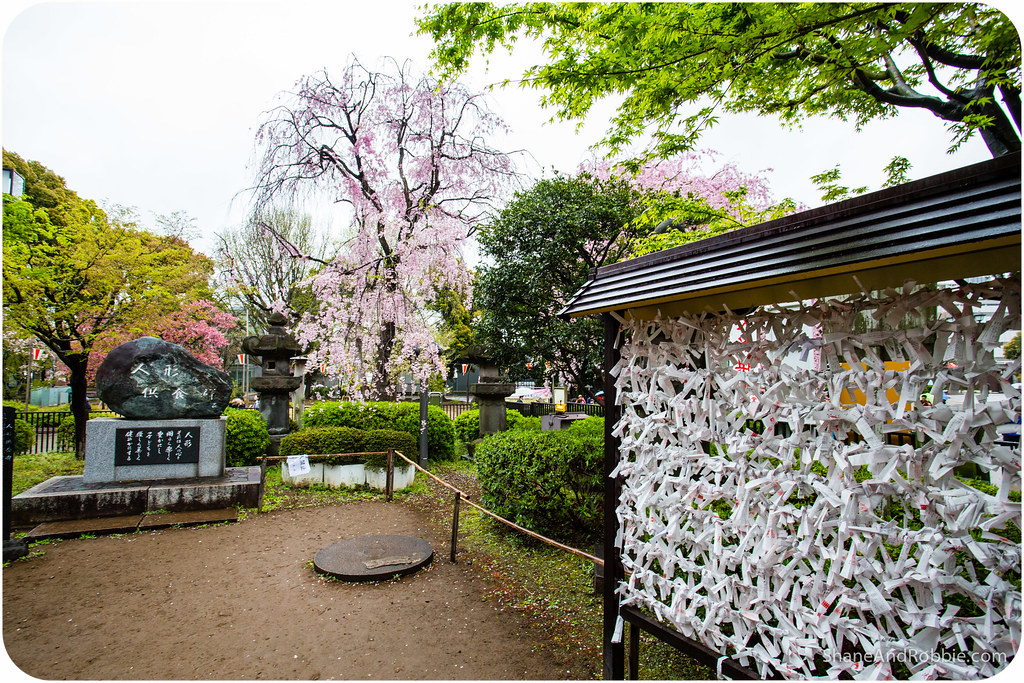 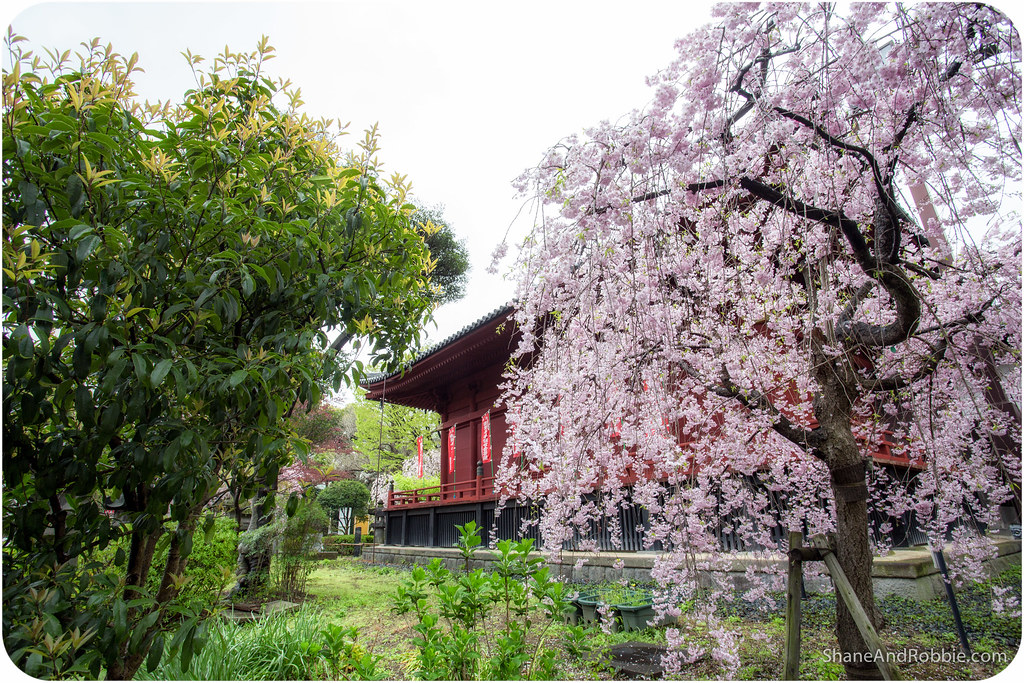 Nearby was the Tōshōgū shrine, dedicated to Tokugawa Ieyasu (the founder and first shogun of the Tokugawa shogunate of Japan). Ieyasu ruled Japan from about 1600 until the Meiji Restoration in 1868 and shrined dedicated to him are found around Japan. 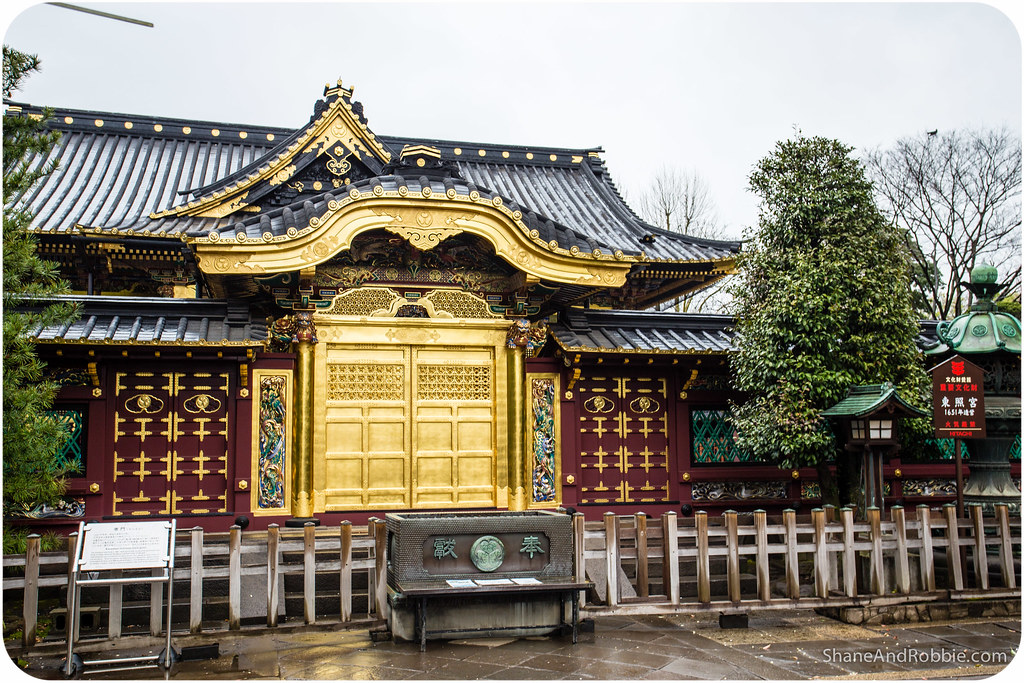 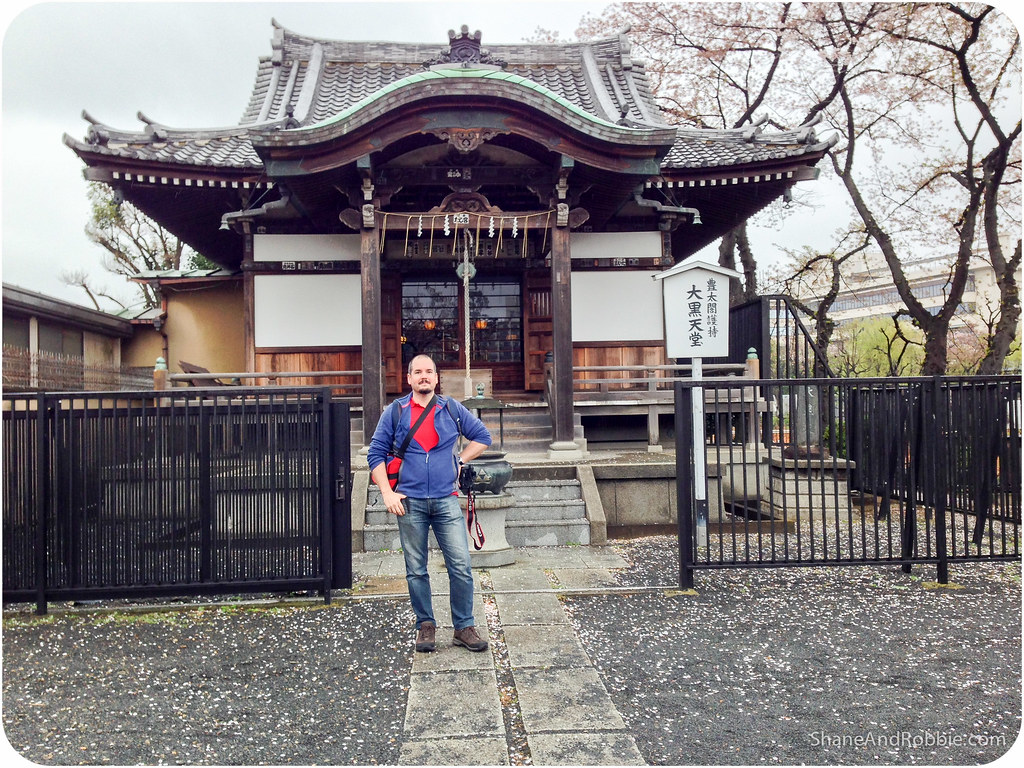 From Ueno Park we wandered out into the streets of the suburb. The narrow laneways are today lined with houses worth millions and millions of Yen, but once upon a time Ueno was one of Tokyo’s shitamachi (i.e. working lass) districts of Japan. It was great seeing how “suburban” Tokyoites live and once again appreciating just how little free space there is in this city! Every spare centimetre of land was used in some way, and not an inch of it wasted. During our travels we found a tiny coffee shop in Ueno that beckoned us with its warmth and dryness. A lovely spot to sit and people watch for a few minutes…. 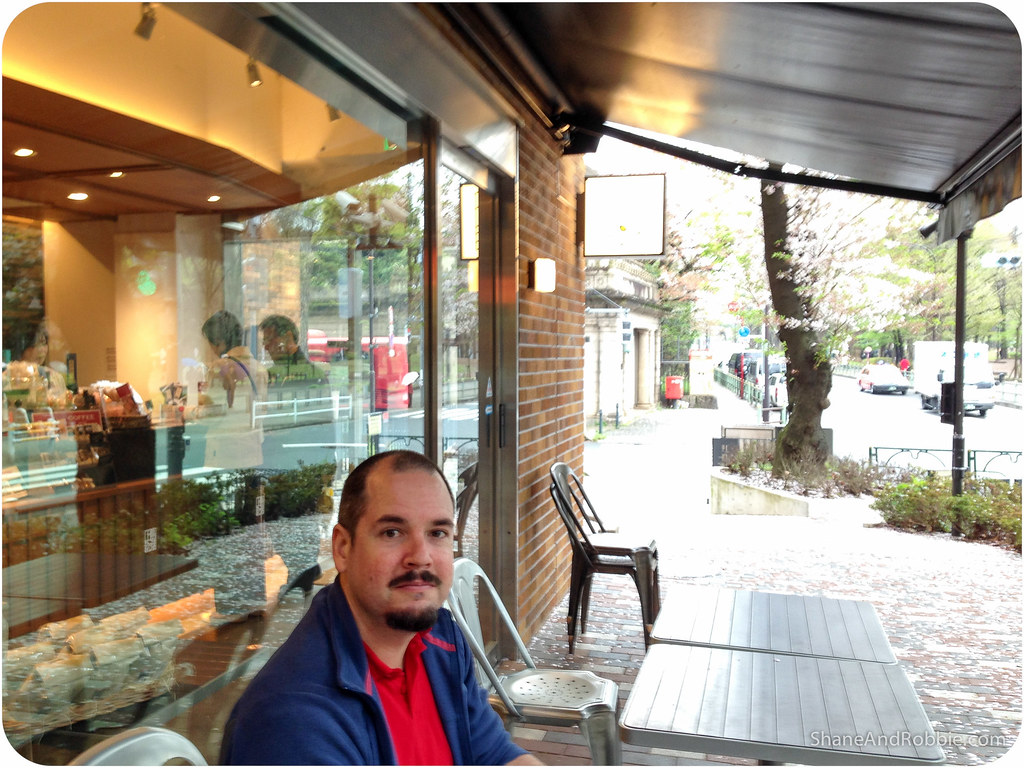 From Ueno we walked across to the Yanaka Cemetery – one of Tokyo’s oldest cemeteries and home to the grave of Tokugawa Yoshinobu, the last shogun of the Edo Period. The cemetery is also famous for its beautiful cherry blossoms, which have already started blanketing all the beautifully-maintained graves with pink and white petals. 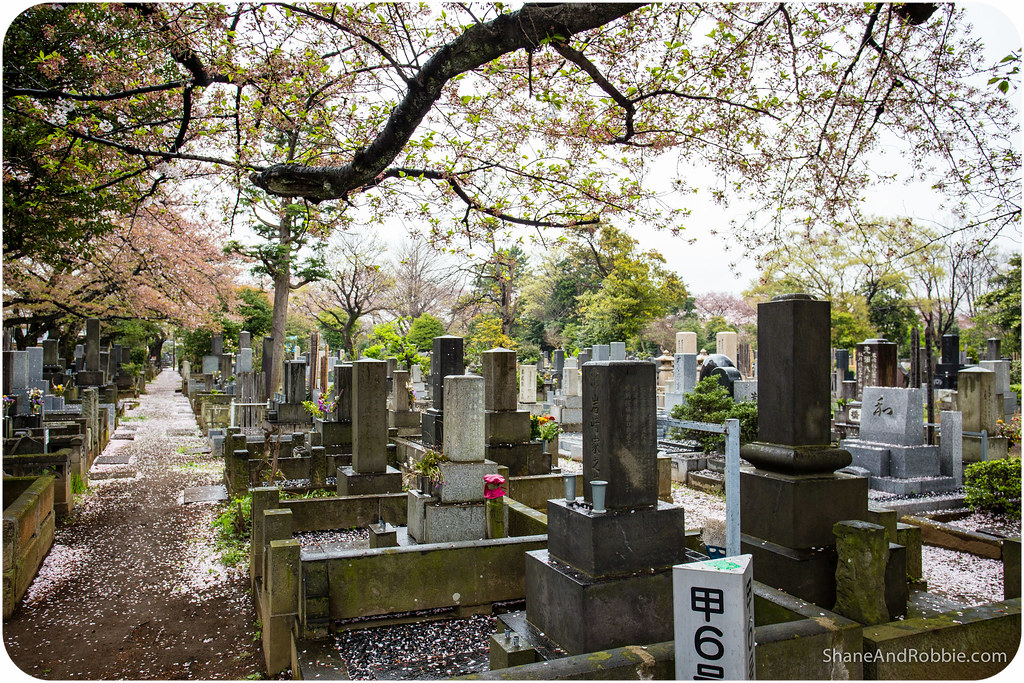 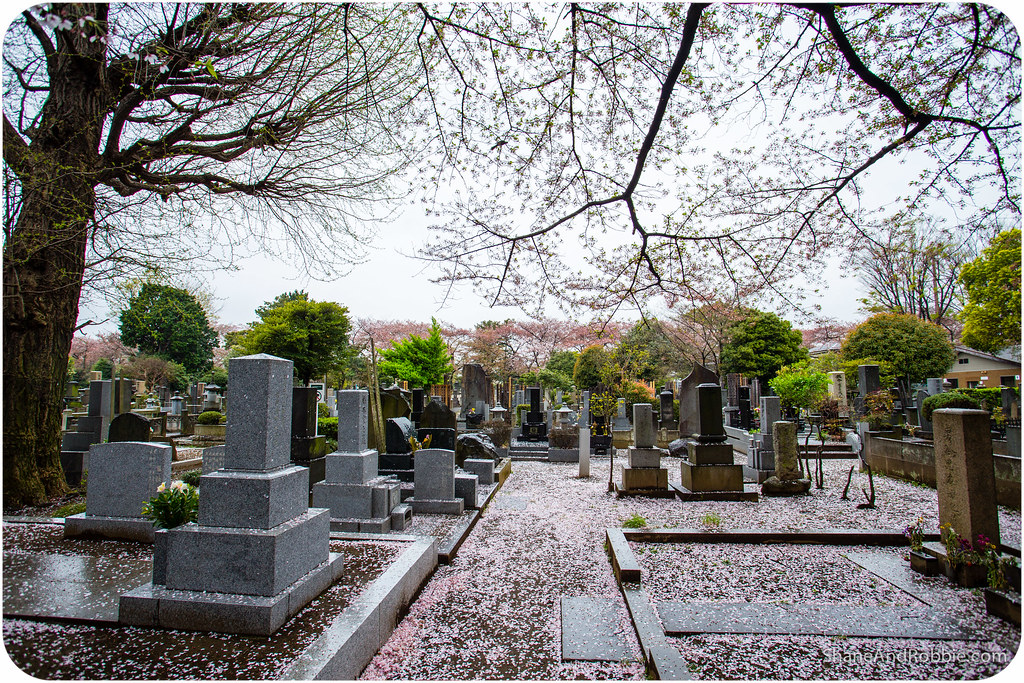 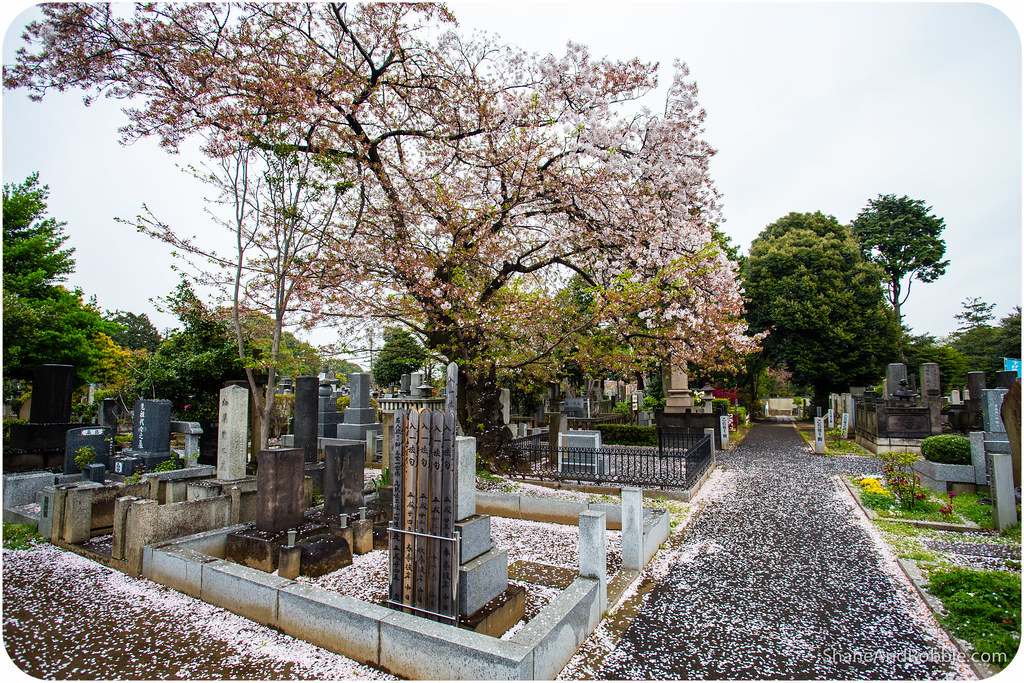 Having finished our cultural wanderings for the day, we hopped back on a train for Shinjuku (well outside rush hour this time). And now we’re pondering how best to spend our last night in Tokyo. Shane’s all for dinner at an izakaya (i.e. Japanese pub) in town, followed by some panchinko, but I’m thinking a bowl of hot spicy ramen noodles and an in-room movie. Maybe we can reach some kind of compromise.. 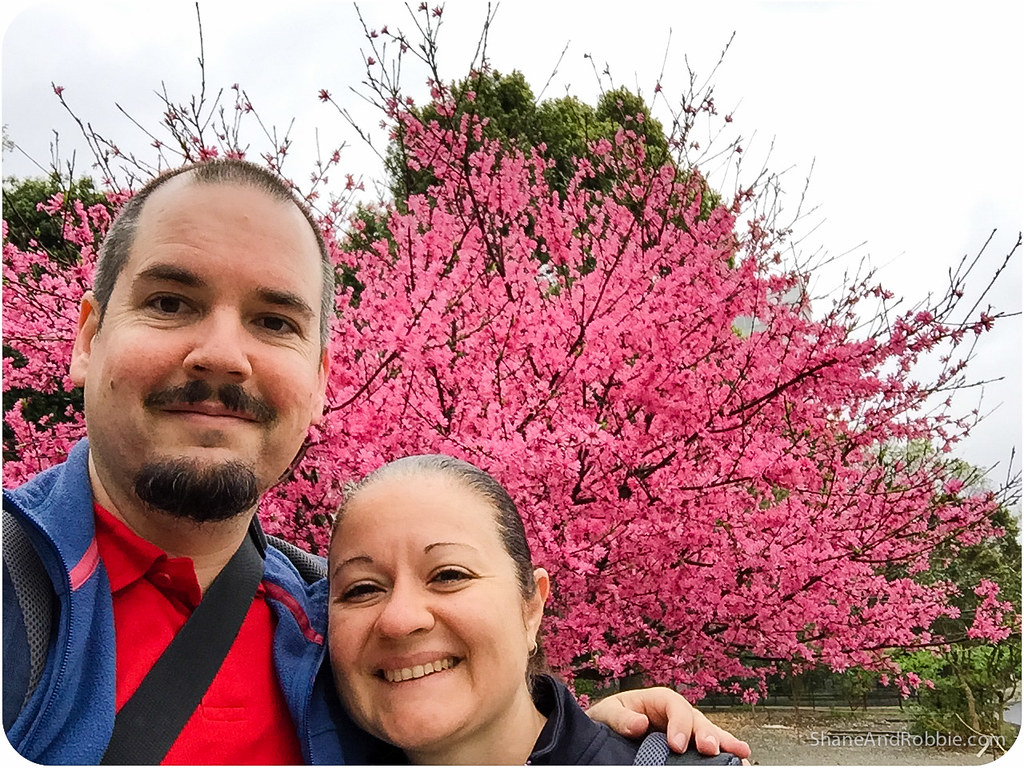 Post-dinner update:  The compromise was dinner at a local izakaya followed by an in-room movie. Everybody’s happy! Man it is COLD out there now though. After months of stupidly hot, humid weather in Brisbane, we’re seriously unprepared for these kinds of temperatures (or lack thereof). And tomorrow we’re heading off into the mountains, where IT’S CURRENTLY SNOWING. Yikes! 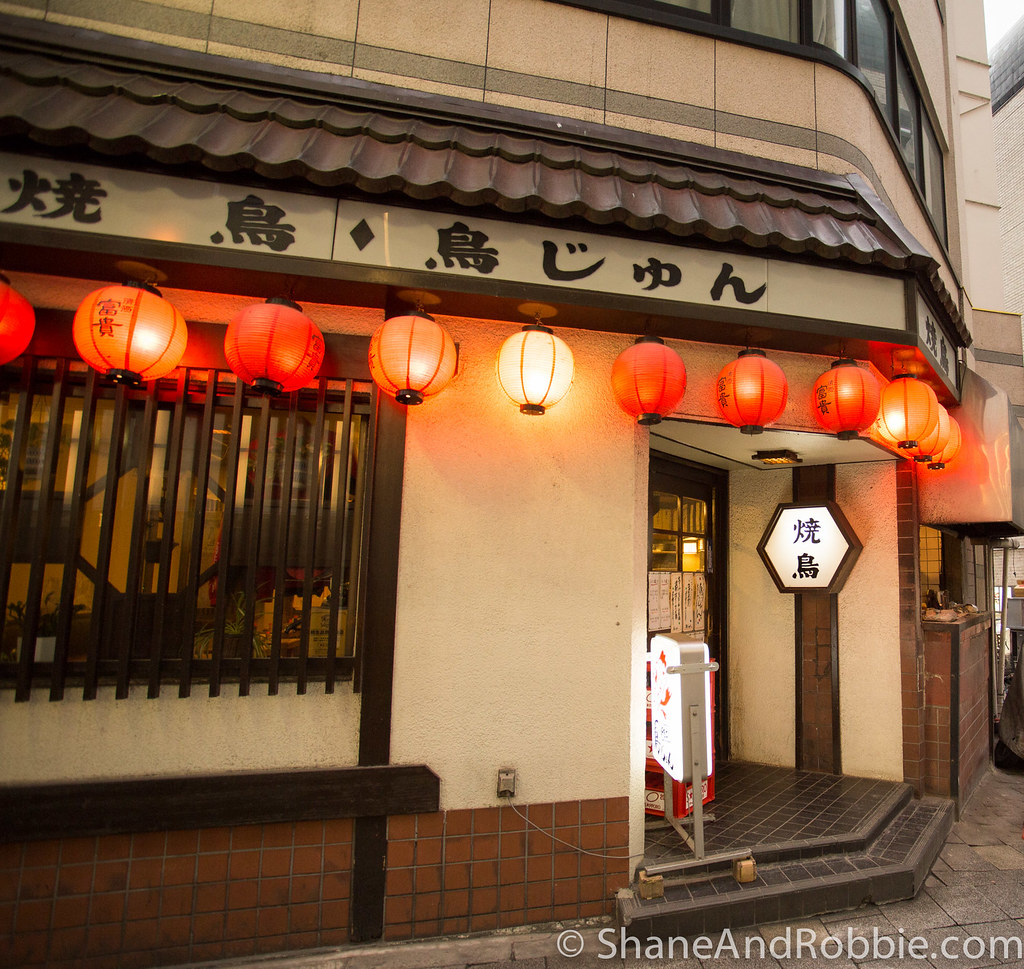 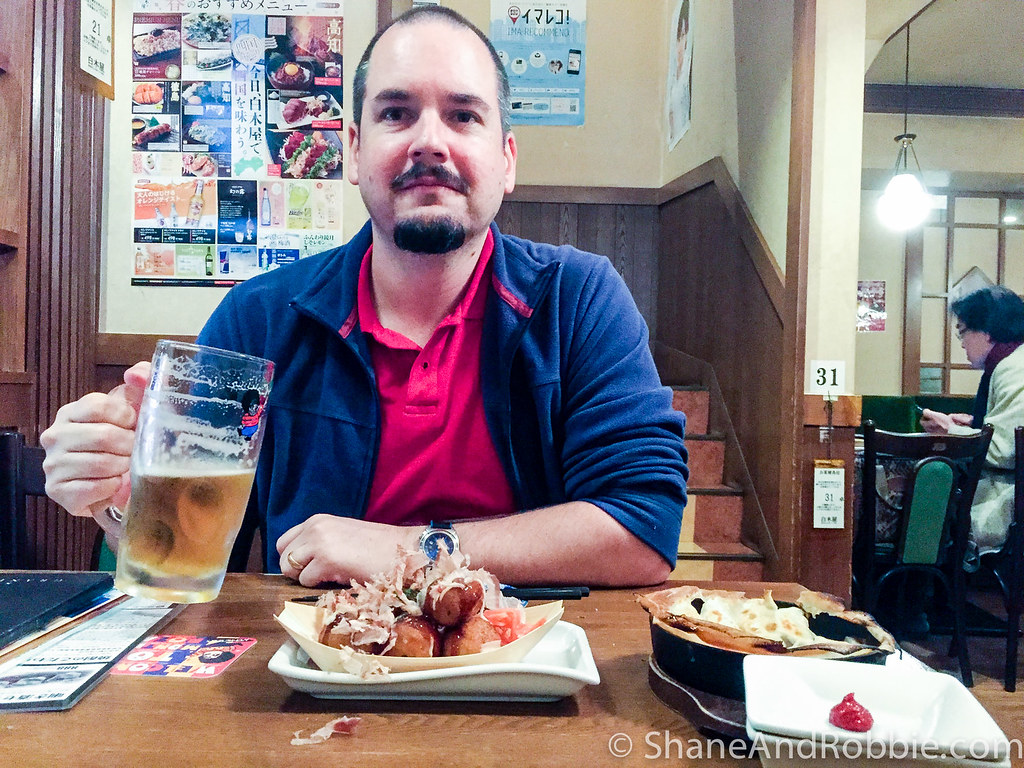