We like to map out our itineraries based on a things like what sights we want to see; the experiences we want to immerse ourselves into; foods we want to savour; and the weather we’re likely to experience in a place. Weather isn’t everything, but touristing is much easier when it’s as pleasant as possible. “Pleasant” to us means about 20 degrees Celsius, sunny, and dry. We call this “chasing 20 degrees”. It’s a concept that’s worked well for us in the past as it means we have to carry less gear, have an easier time getting to and from places, and generally enjoy the whole travelling thing a little more. Obviously it’s not always possible to chase 20 degrees (e.g. Iceland never gets that warm, so in 2013 we settled for visiting in August when average temperatures hover around 15-18 degrees), but for us it’s a good way to plan things. That is the theory anyway. Today our desire to seek out 20 degrees got well and truly ruined as we got snowed on. Yup – that’s right folks: SNOW. 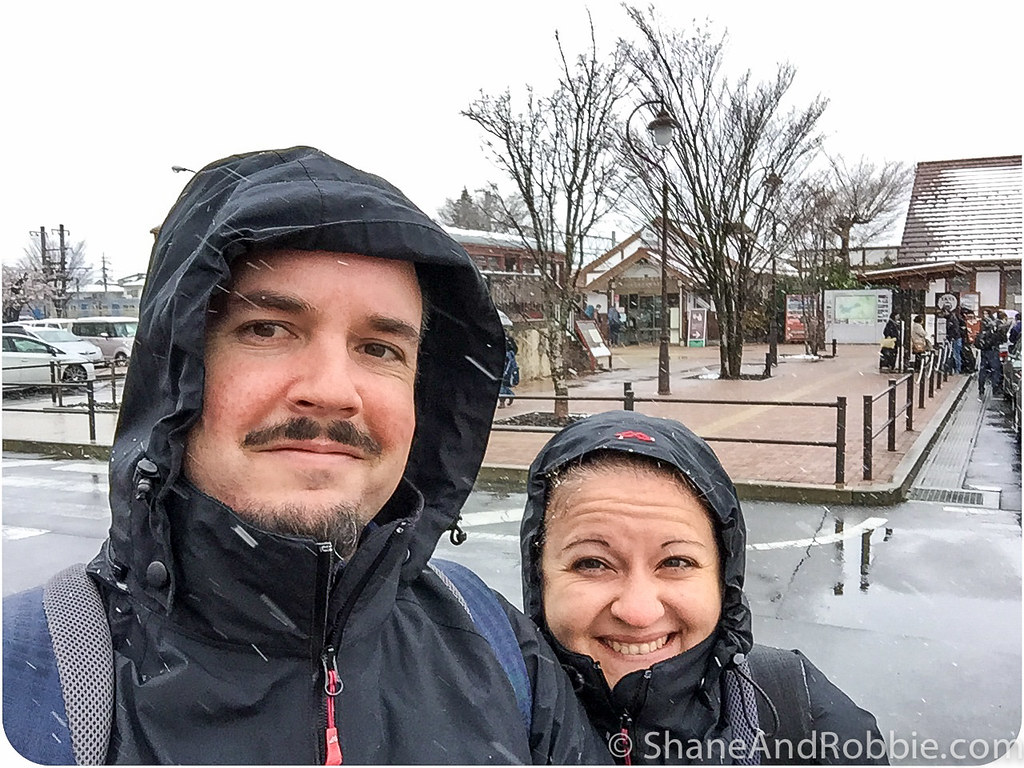 Last time we were in this part of Japan in June 2013 we did a day trip from Tokyo to Hakone, on the Southern side of Mt Fuji. We were hoping to catch a glimpse of the famous mountain, but to no avail. It rained all day and all we saw were clouds. The area around Hakone is very pretty, and it was still worth the visit; but Fujisan did not reveal itself to us that day. So this time around we thought we’d come up here and stay on the Northern side of the mountain, where the views are supposedly better. We’re also staying up here for a few days – to give ourselves a better chance of catching the elusive mountain unveiled. This is the best view of Mt Fuji we got today: 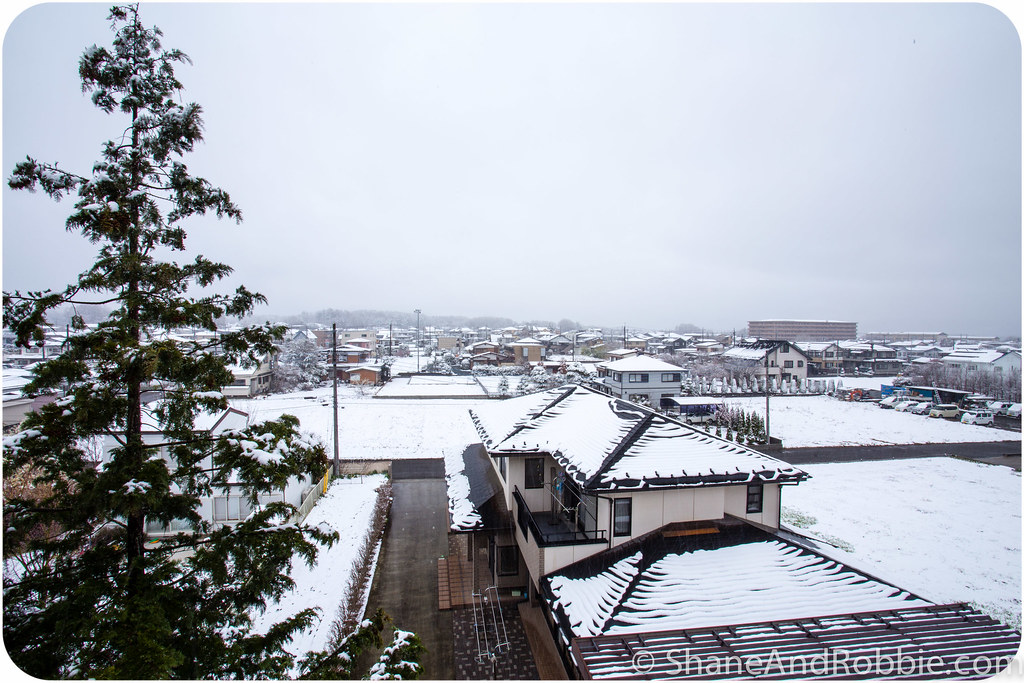 Here’s another great shot of Mt Fuji from another angle:

When you look at the historical weather information for April for this region, guess what the temperatures has been on average for the past 5 years? That’s right: ABOUT 20 DEGREES! It was exactly 0 degrees Celsius here in Fuji-kawaguchiko-machi when we arrived at midday today and the temperatures just dropped from there. What the hell Japan?? That’s NOT 20 degrees! *SIGH* Seems even the most thought-out plans can fail… 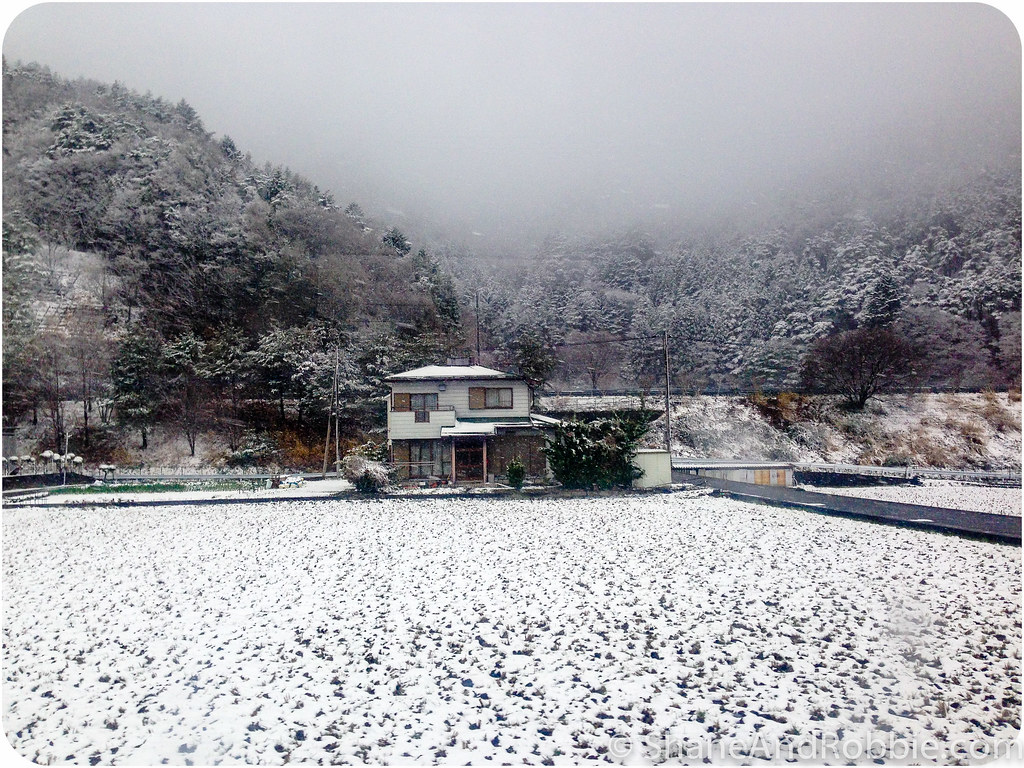 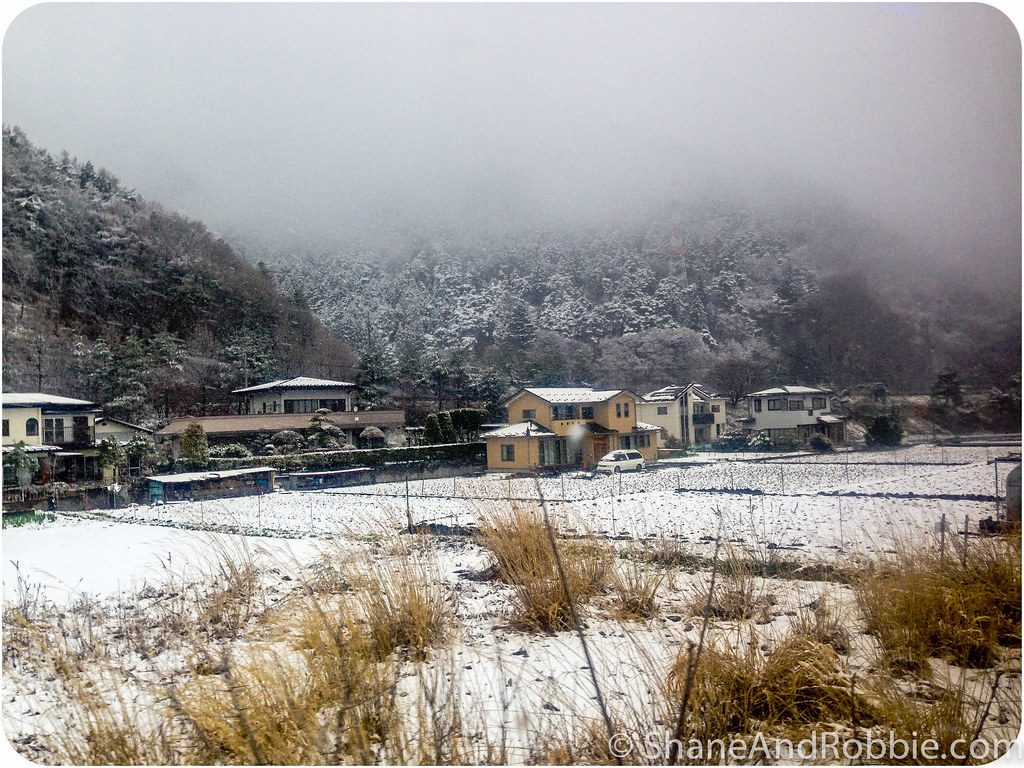 Fuji-kawaguchiko-machi* is a small lake-side town with a population of just 20,000 that’s about 3 hours from Tokyo by train. We chose this as our base for a few days as it’s very central and has good transport links, with a train station in town and a bus terminal that allows access to many hiking trails and sightseeing spots. The town itself is a bit tacky and very touristy, though the main tourist season doesn’t kick off until mid-April. So at the moment it’s actually quite quiet, which is nice after the busyness and chaos of Shinjuku.
*It may seem like a long name for such a small town, but it does make sense: Fuji = named for the mountain just to the South of this town. Kawaguchi = the name of the lake the town is situated beside. Ko = Japanese for lake. Machi = Japanese for town. 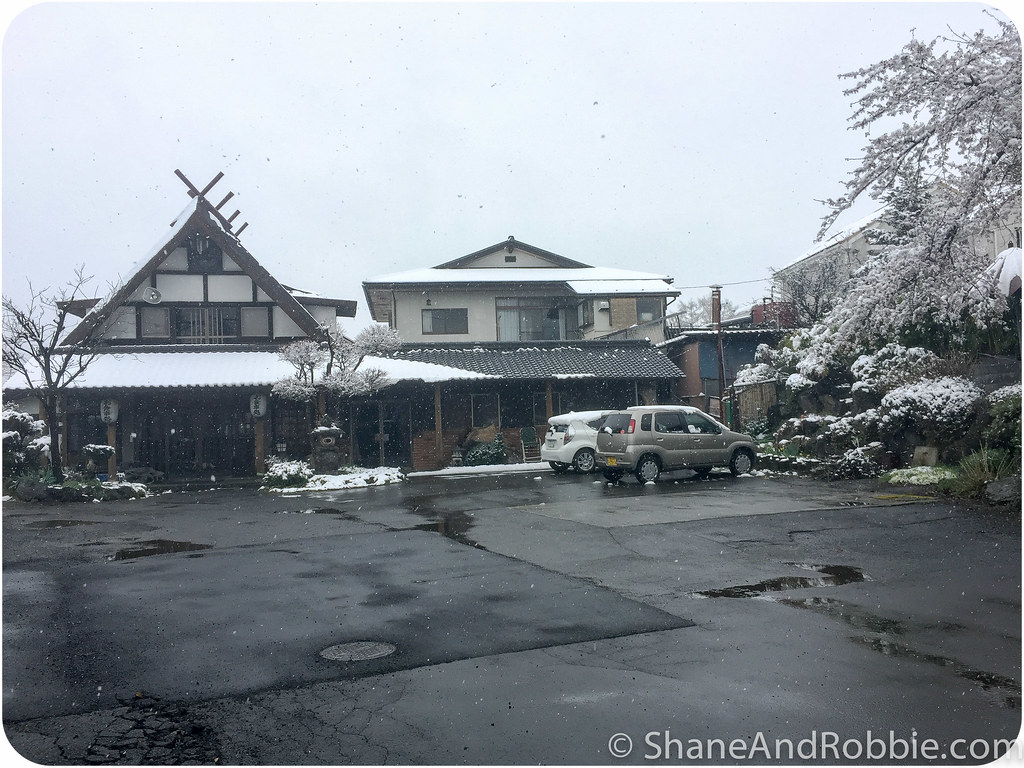 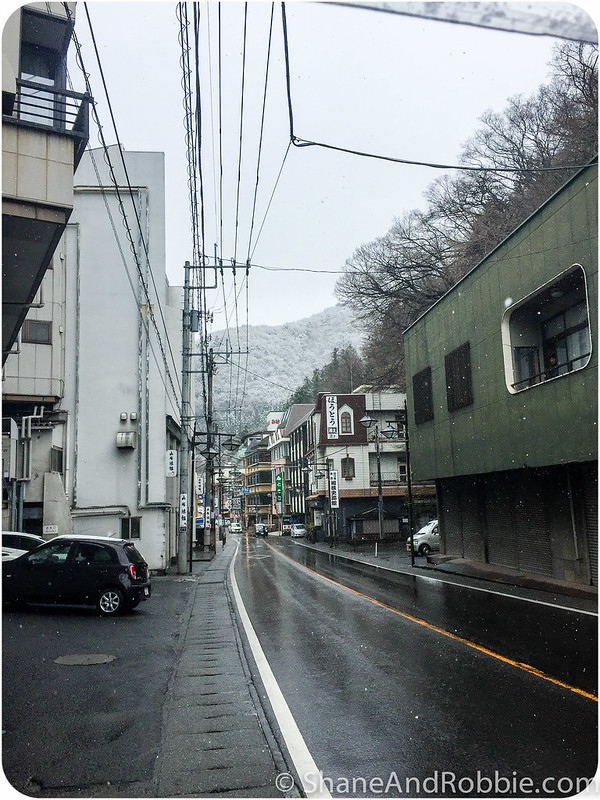 We arrived in Fuji-kawaguchiko-machi around 12:00 and headed straight out for some lunch (which, in case you were wondering, was the mandatory bowl of hot ramen noodles). After dropping our bags off at our hotel we decided to brave the snow falls* and headed out for a walk around town.
*At last count we had just over 10cm of snow fall today between 10:00am and 6:00pm. That’s A LOT of snow for 2 cream puffs like us. We’ve been living in the tropics for the past 18 months and that much white, fluffy stuff was just a wee bit more than we were prepared for today! 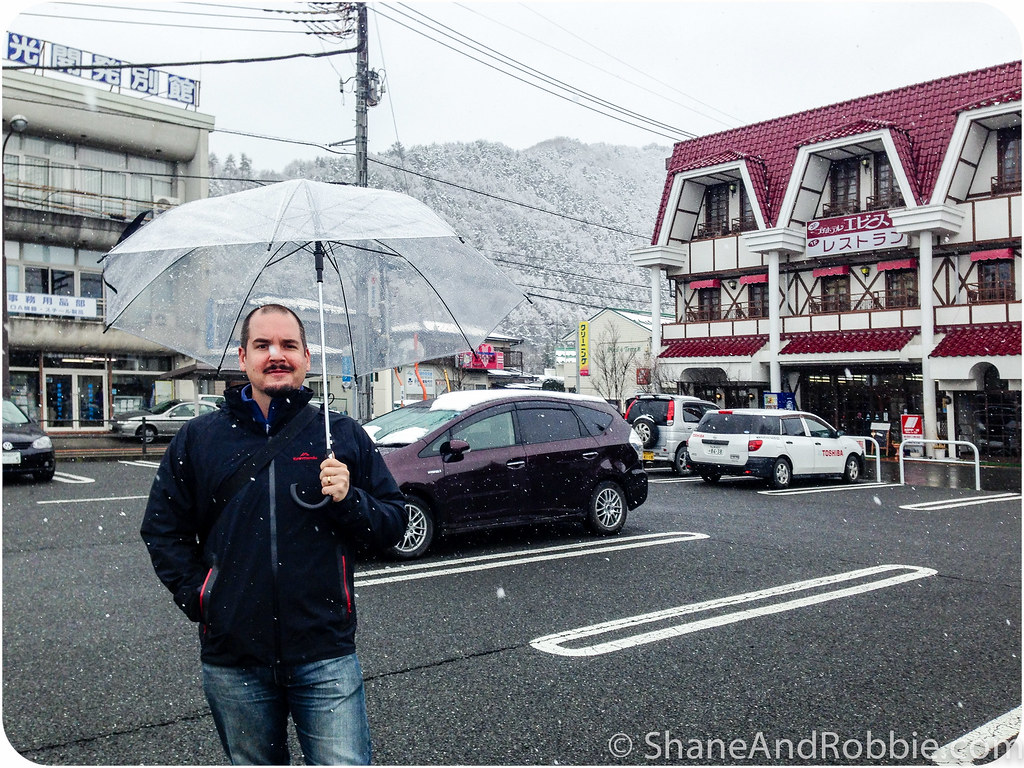 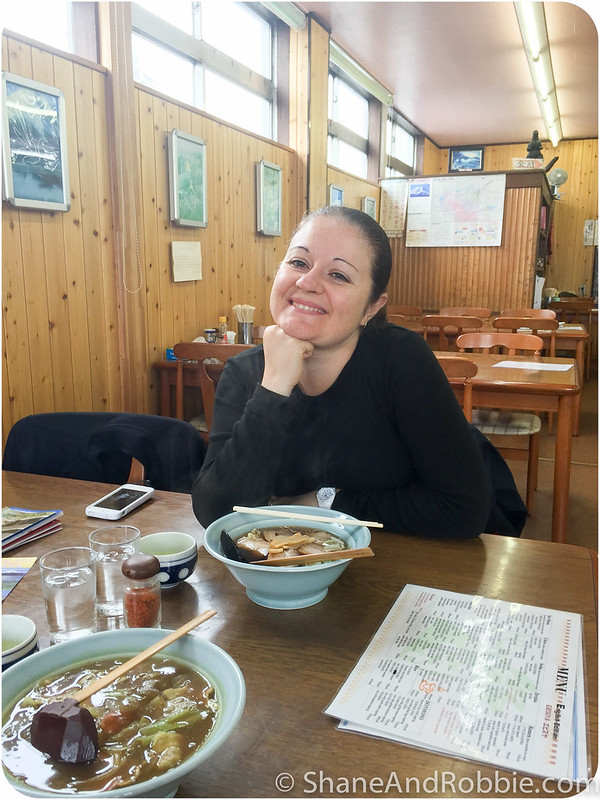 During our wanders we came across a small temple, set amongst a grove of ancient pines and snow-covered cherry trees. Very pretty, despite the cold and grey skies. 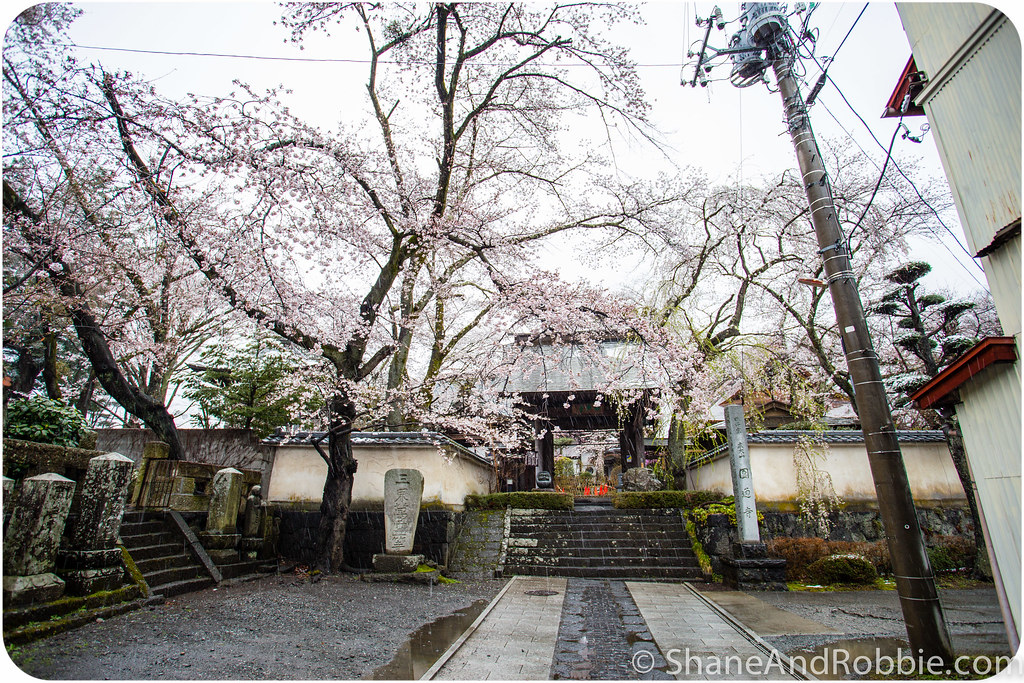 From town we walked down to the lake-front and peered through the low clouds, across the grey waters of the lake, towards the forested slopes of Kachi-Kachi-yama (i.e. Mt Kachi-Kachi). No doubt its incredibly beautiful on a sunny day, but today it was just cold. Very, very cold. Cold enough to drive us back to the warmth of our hotel where the heater is set to “STUN”. We’ve defrosted and are now just chilling out, watching the snow flurries outside our window. 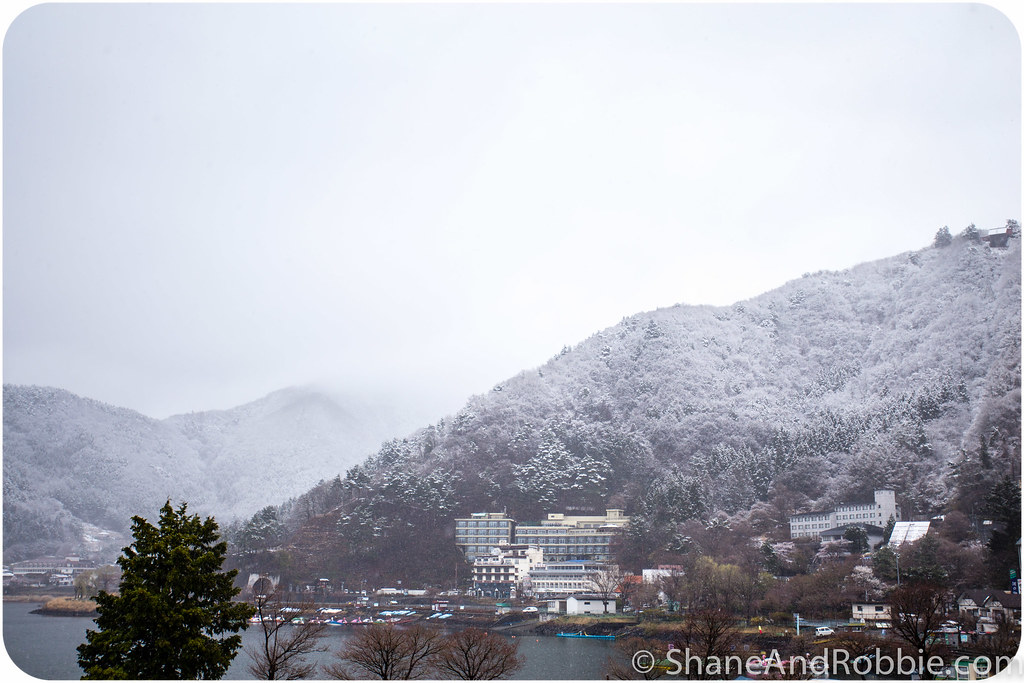 Not a very exciting day today blog fans, but join us tomorrow to see if Mt Fuji reveals itself to us… 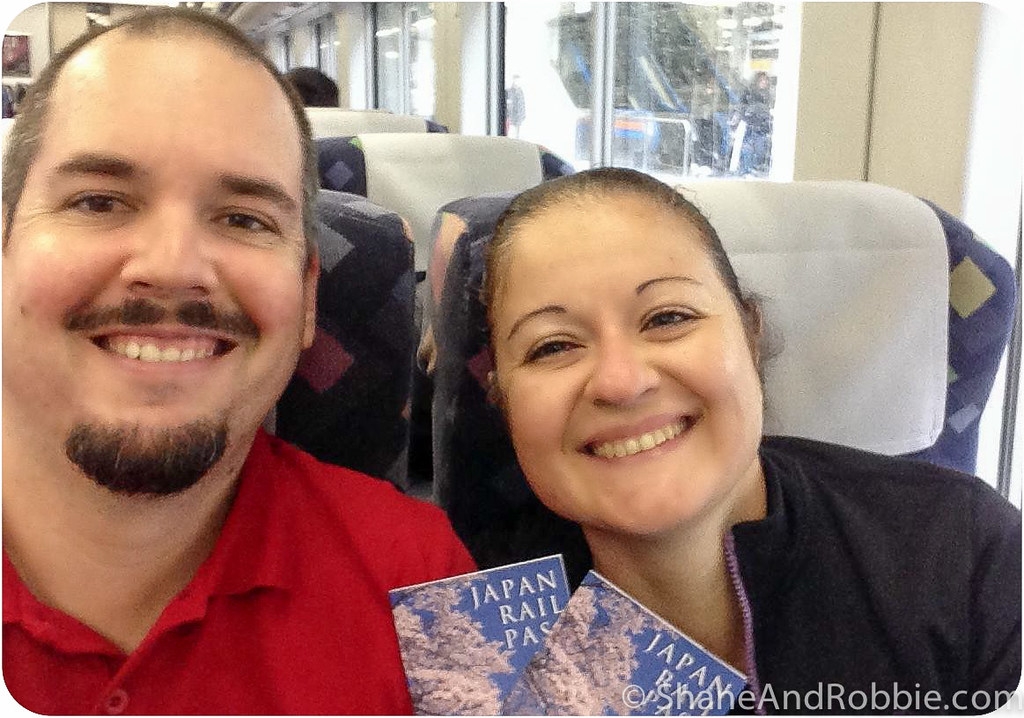