The highlight of our day today was exploring Ritsurin-koen (i.e. Ritsurin Garden). This beautifully landscaped 17th century daimyo koen (i.e. strolling garden) is situated in the city of Takamatsu, our base for the next few days. Ritsurin-koen is one of the most famous historical gardens in Japan and certainly one of the prettiest we’ve seen. 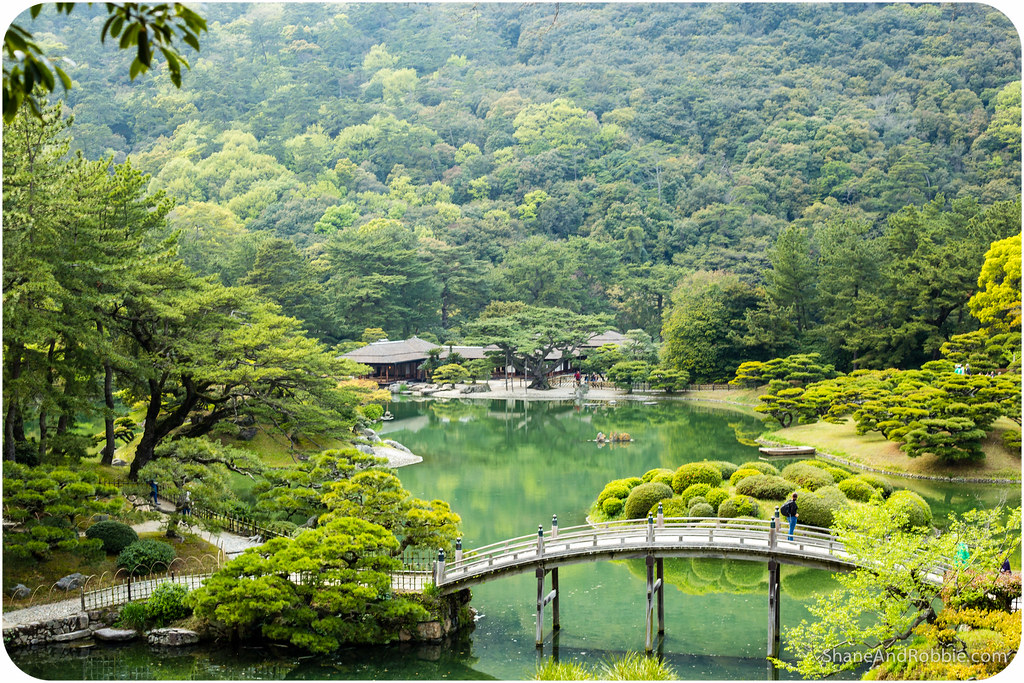 Takamatsu (population 450,000) is a small city by Japanese standards, but one of the largest centres on the island of Shikoku. Due to its proximity to the main island of Honshu, Takamatsu has been an economic and political hub since the Edo period. Still today it is the government centre for Shikoku and many companies have their Shikoku head offices here. It’s a far more industrialised city than we’ve seen before, with numerous factories, petrochemical processing plants and large commercial establishments on its outskirts. The port here is also very busy, with lots of container ships and passenger ferries picking up and dropping off their loads here. During World War II almost 80% of the city was destroyed as it was thought to be a critical industrial centre for Japan’s war efforts. As a result of this, most of Takamatsu city itself is very modern, clean and functional; as we discovered wandering its streets this afternoon. 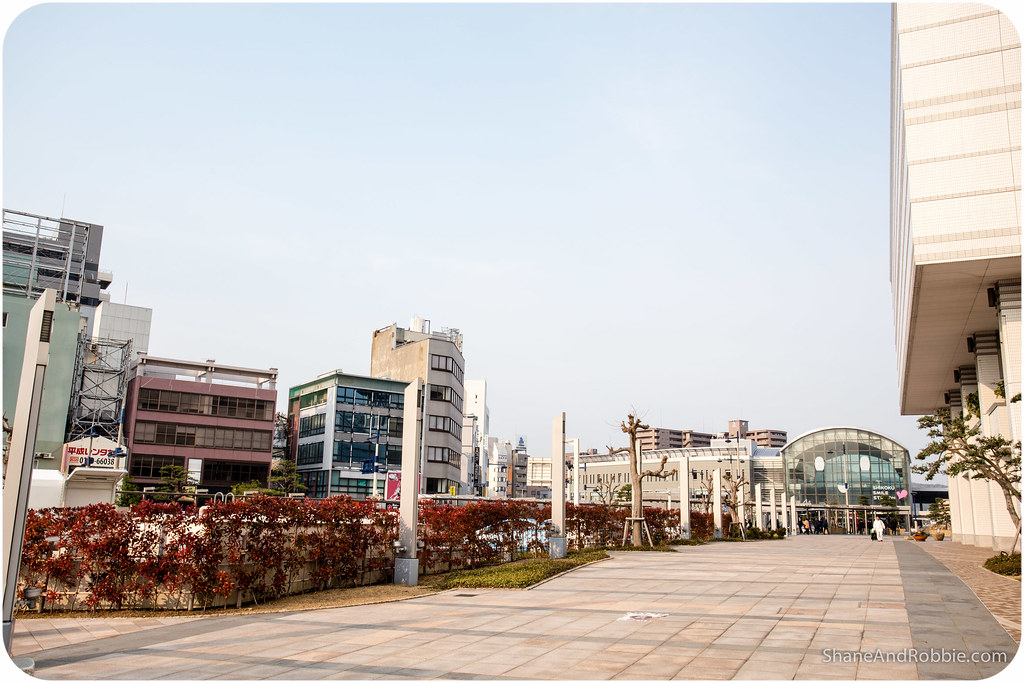 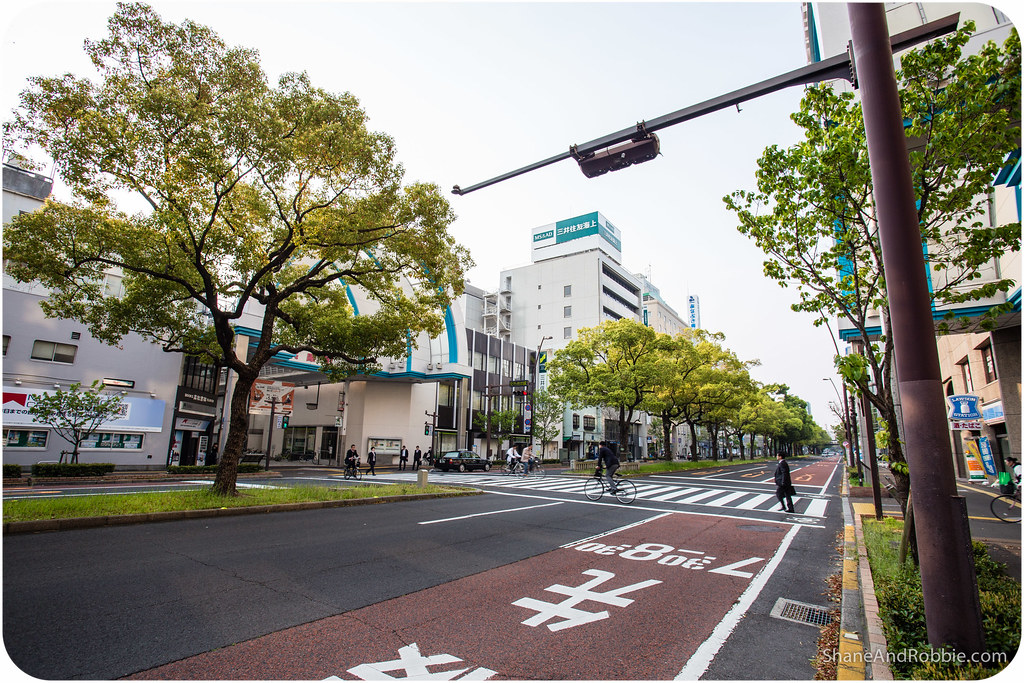 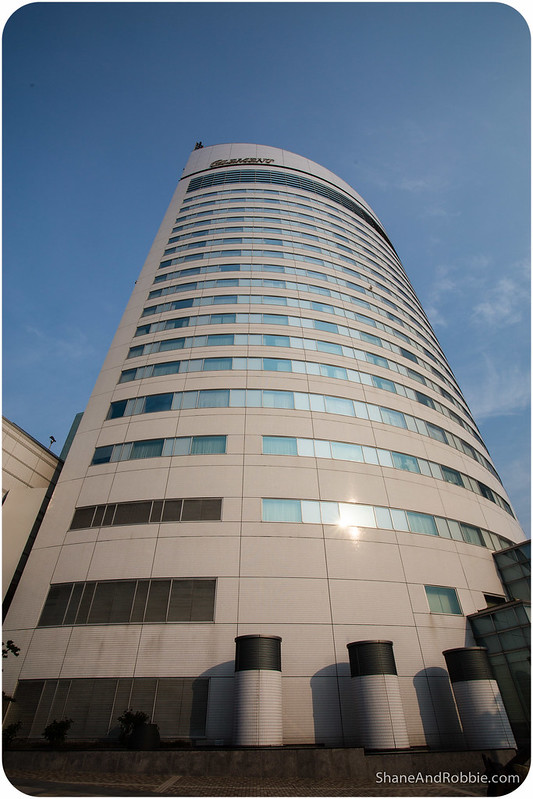 To reach Takamatsu we had to leaver Honshu behind today and crossed the Akashi Strait onto Shikoku. This is the third of Japan’s 4 main islands* we will have visited. Shikoku is the least populous of Japan’s main islands and is relatively undeveloped, with the mountain ranges that cut across the island from East to West limiting farming and urbanisation throughout much of the inland region. What arable land there is has been given over to rice paddies, wheat and barley fields, and fruit trees (primarily citrus fruits, persimmons, peaches, and pears). Due to the success of wheat production in the region, sanuki udon noodles are especially popular here. These are square, flat edged, wheat noodles, usually served in a mild miso broth with seaweed. Exactly what we needed for a late lunch today after our long train ride from Nara-shi!
*Working from southern-most to northern-most they are: Kyushu, Shikoku, Honshu, and Hokkaido. 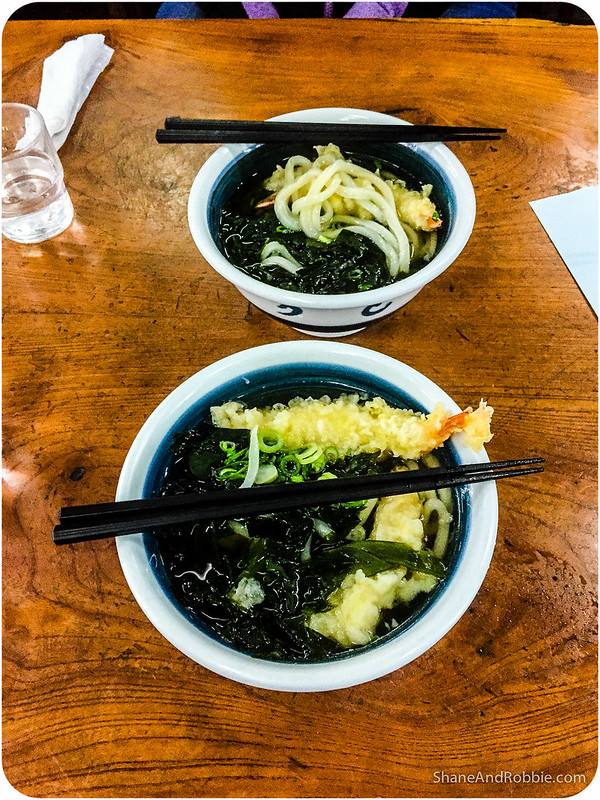 Our afternoon was then taken up wandering through Ritsurin-koen. This 75 hectare public park was first established in 1625 at the behest of a local feudal lord, and has been expanded significantly since then. Set against the back-drop of Mt Shiun, the garden encompasses cherry groves*, cedar plantations, koi-filled ponds, open grassed areas, secluded picnic areas, and a couple of traditional tea houses where you can sit and enjoy green tea served as part of a time-honoured Japanese tea ceremony. They even had a flat-bottomed boat that you could pay to sit in whilst being punted around the garden. All very scenic and quite spectacular.
*Having moved a few hundred kilometres South, it’s noticeably warmer here. Consequently many of the cherry blossoms have finished flowering. Most of the cherry trees we saw today have started sprouting leaves and have barely any sakura left on their branches. Seems our hanami time is coming to an end! 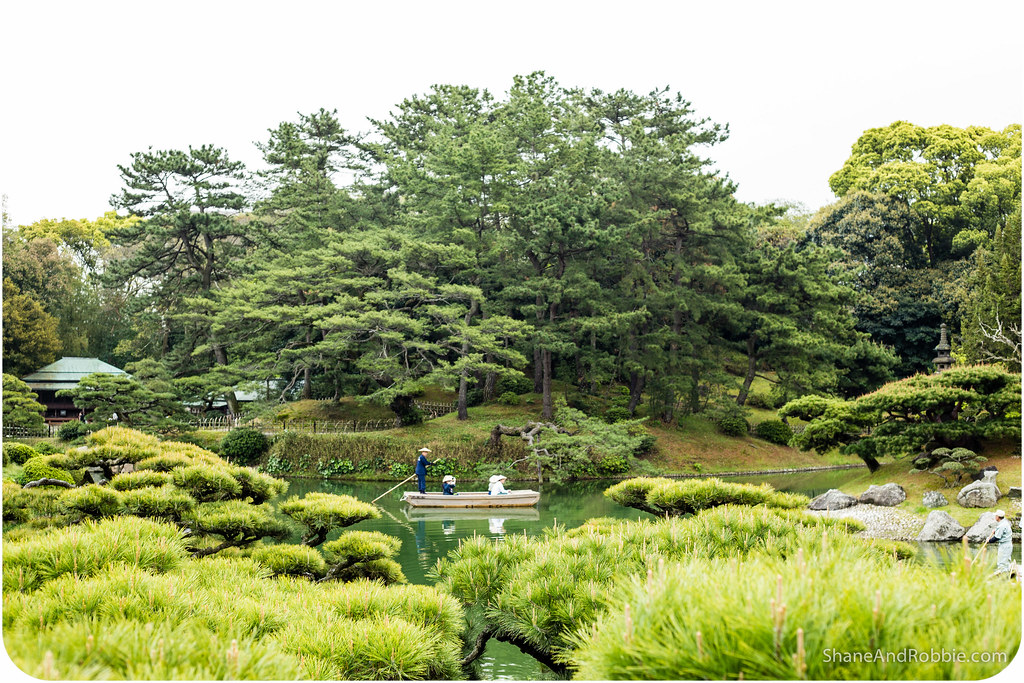 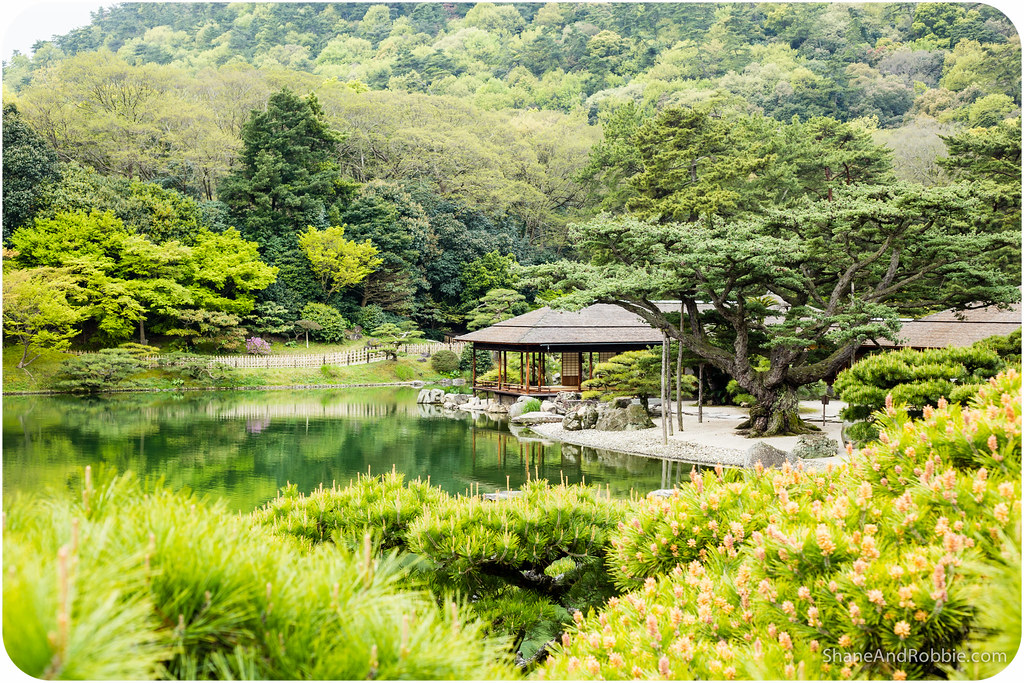 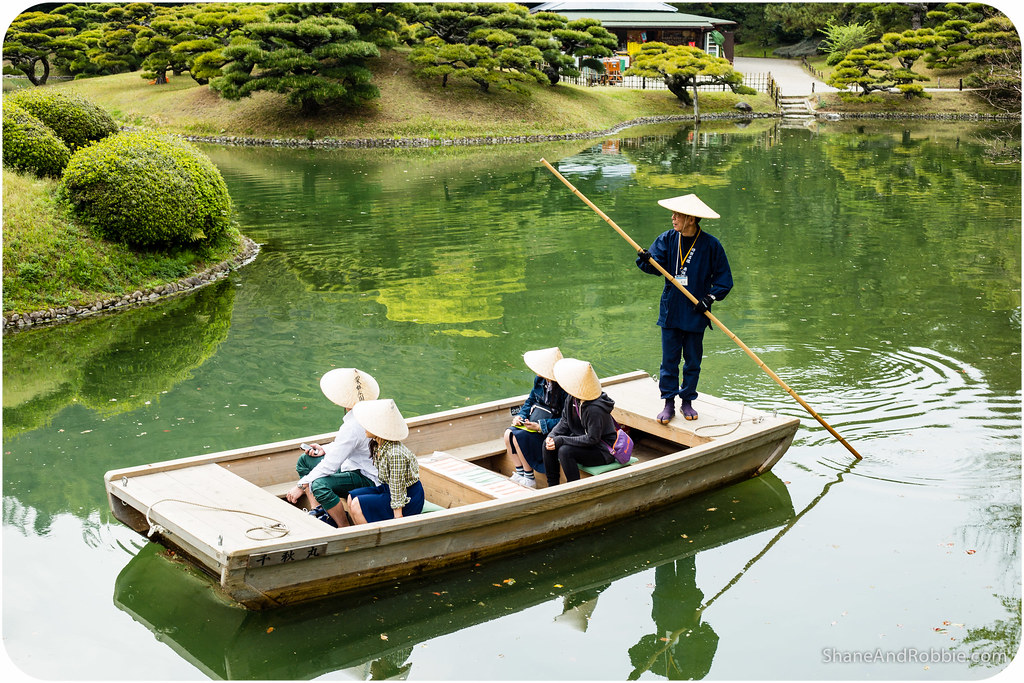 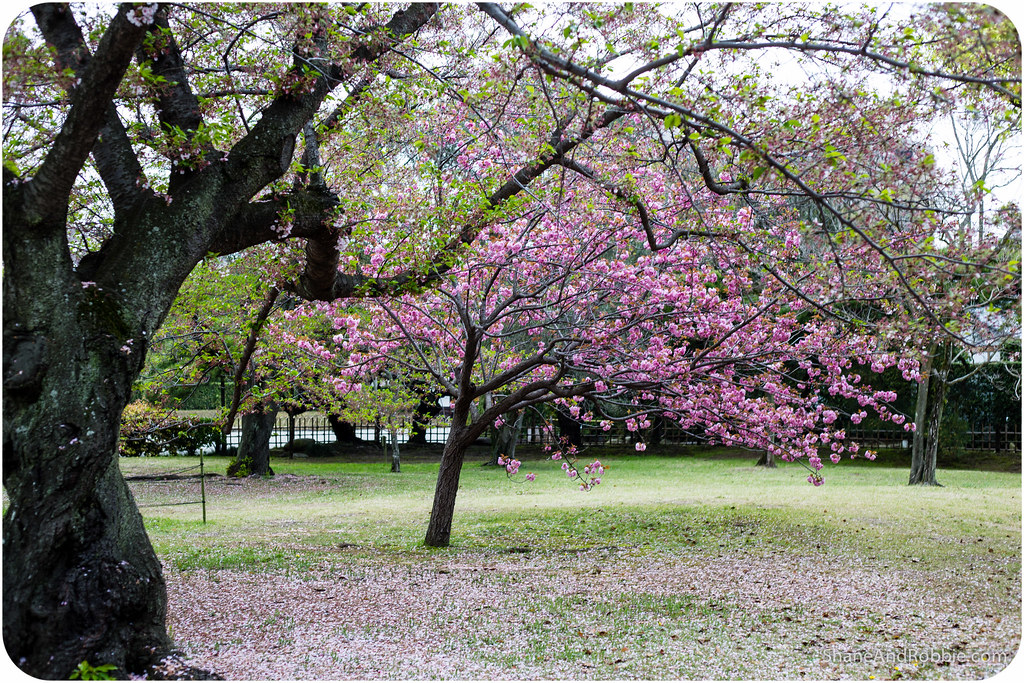 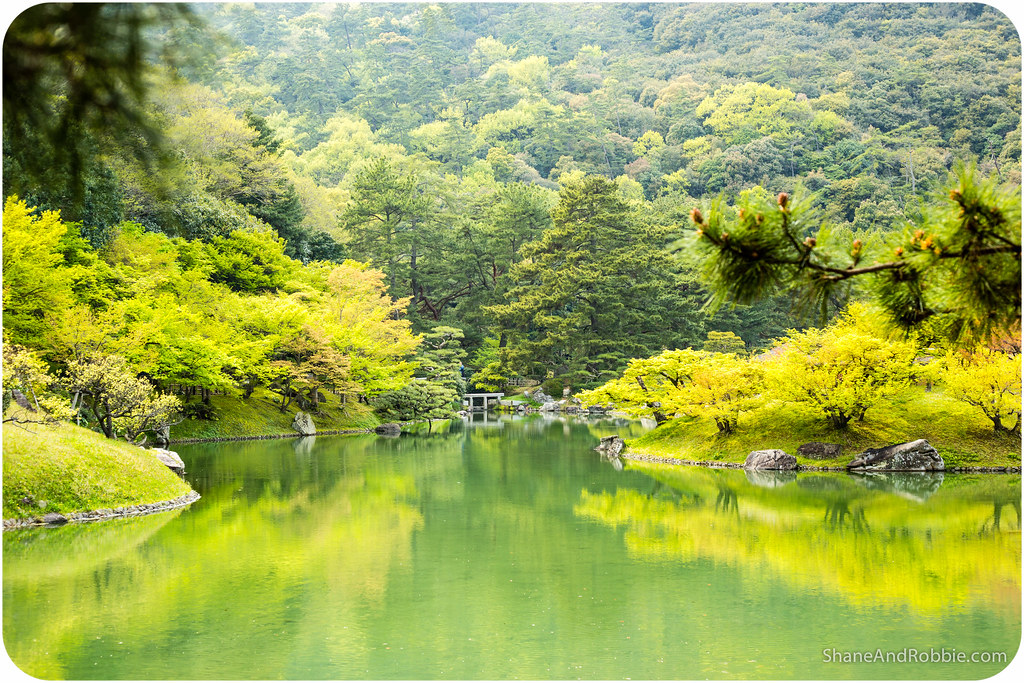 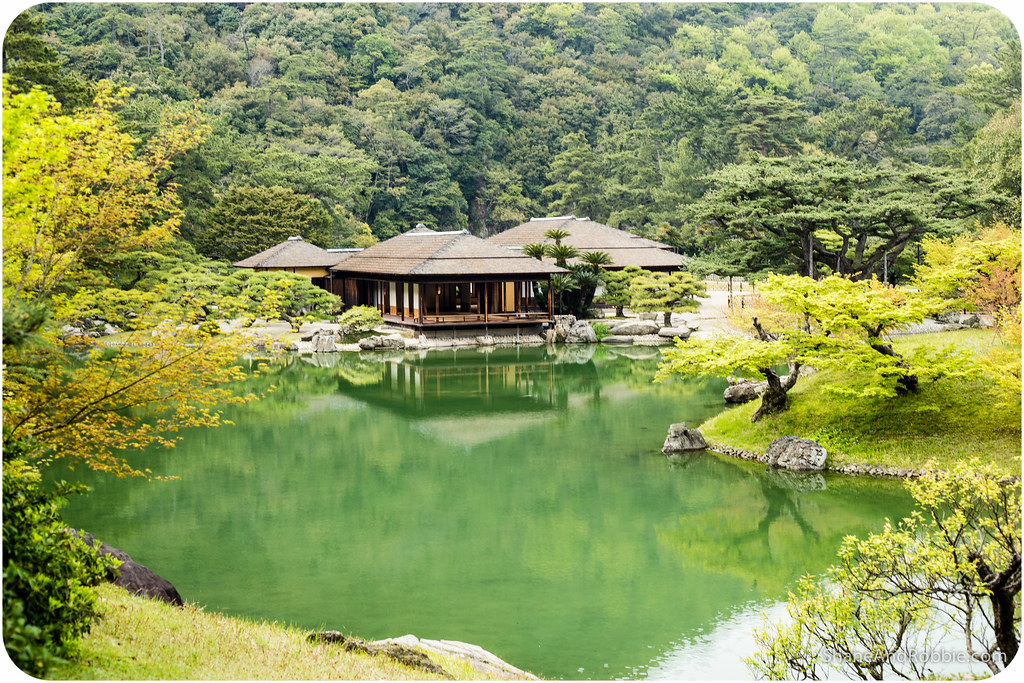 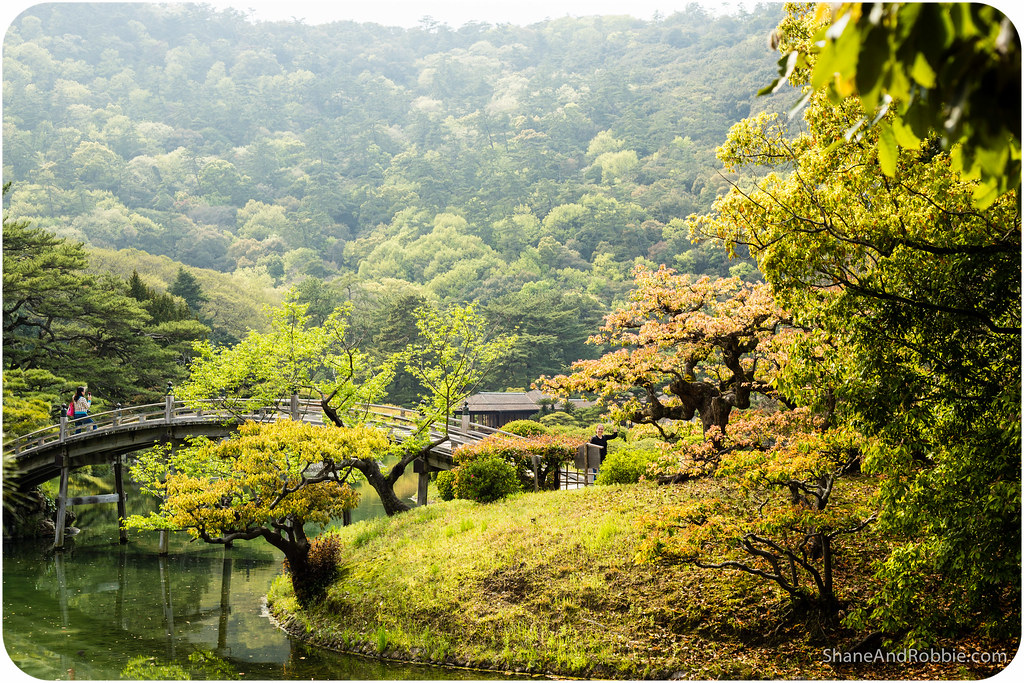 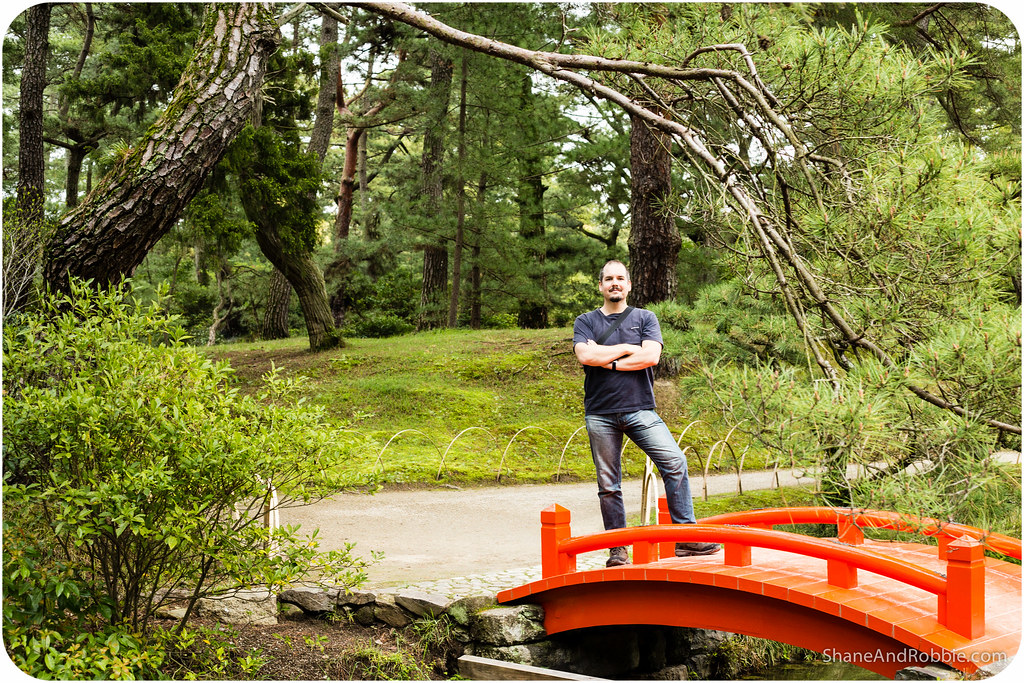 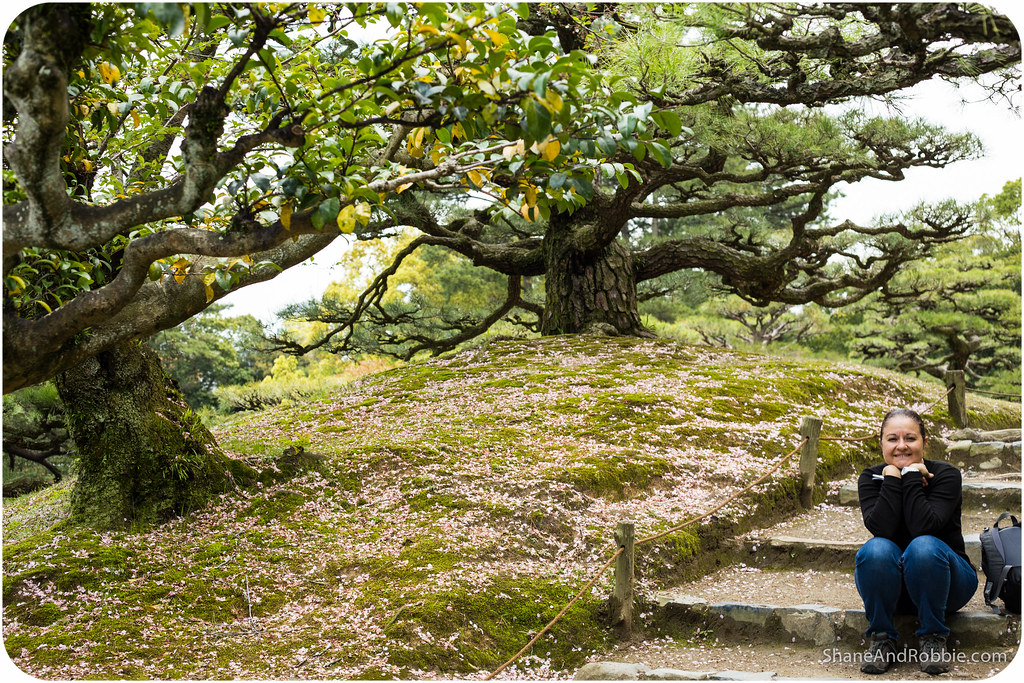 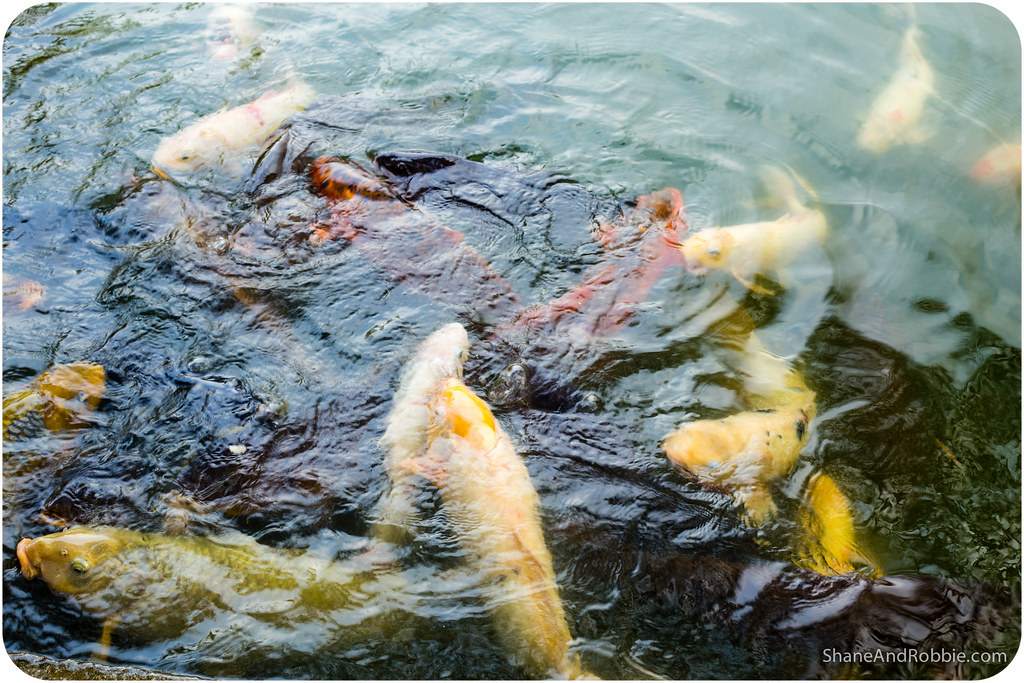 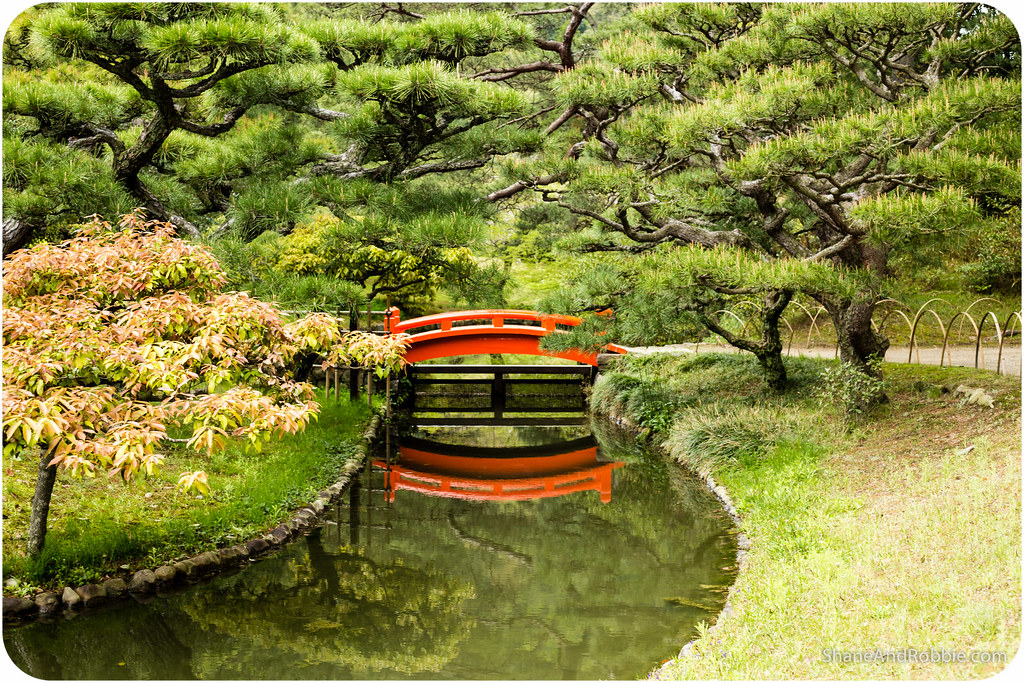 We spent a very pleasant afternoon strolling through Ritsurin Garden and enjoying the serenity it offered. A great start to the next phase of our Japanese adventure. Tune in tomorrow to see what other wonders we can find to explore here in Shikoku! 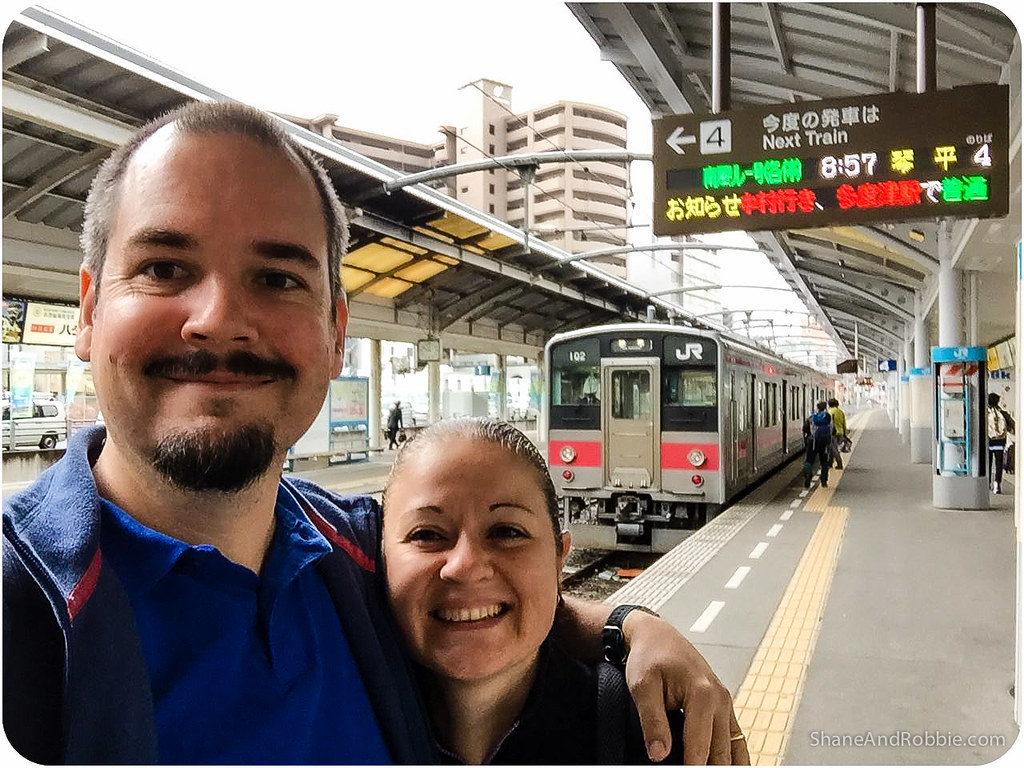