It started raining whilst we were tucked in nice and warm, in our futon beds, last night. And not just a light drizzle or spring shower: it is bucketing down outside. The wind is howling around through the valley outside and the clouds are so low, the tops of the mountains around us are obscured. Seems we had a spring storm blow in overnight… Ah well, if we had to be stuck somewhere during a storm, this is a good place for it. 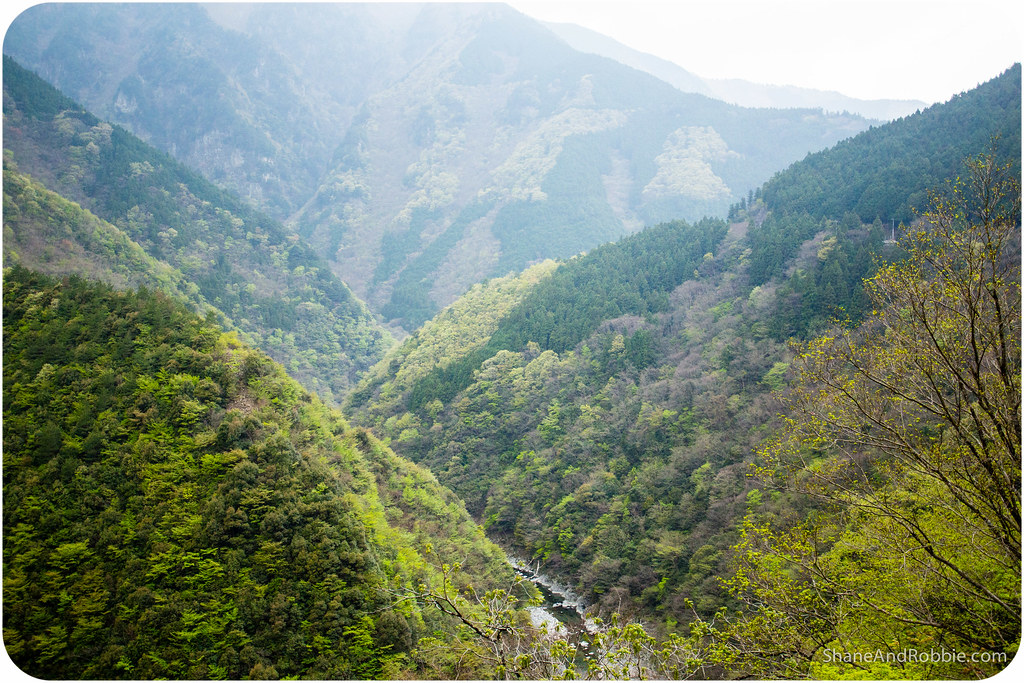 Our day started with breakfast, which was laid out for us in the restaurant and came complete with epic mountain views (very nice, even in the rain). 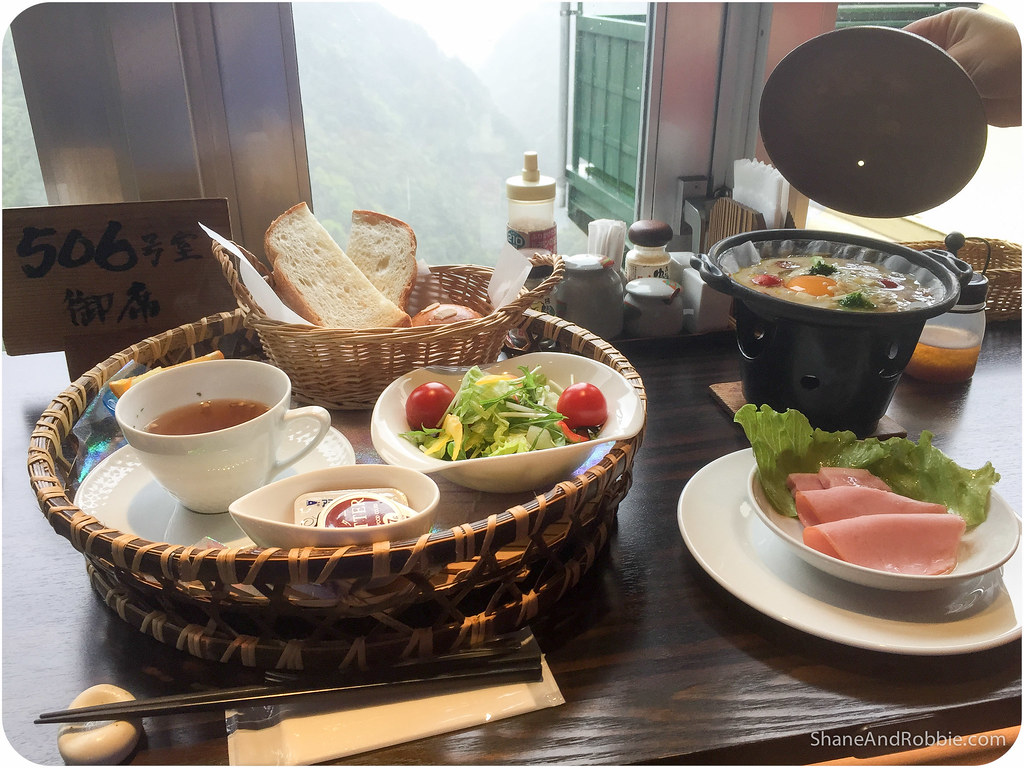 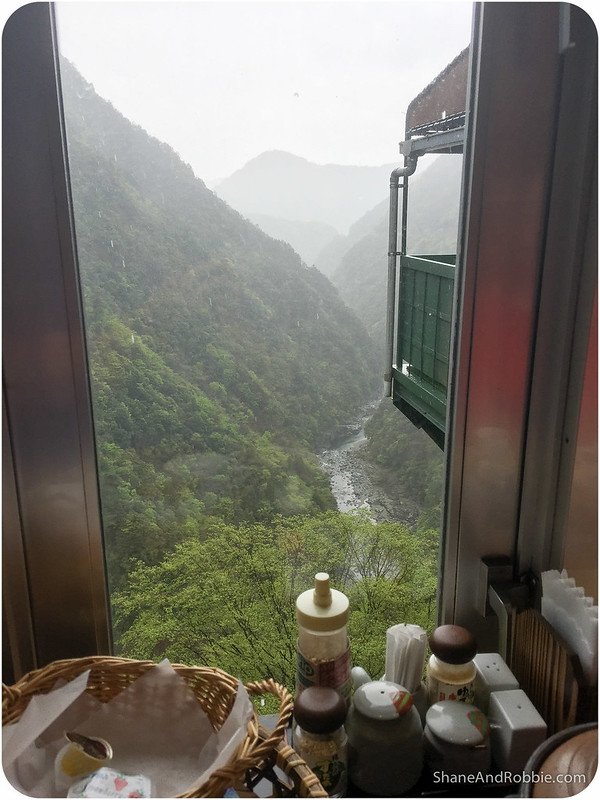 From there we enjoyed some down time reading and relaxing in our room, followed by a visit to the hotel’s greatest asset: the river-front, open-air onsen. This traditional bath is positioned about 200m down the mountain from the hotel itself and is accessible via a purpose-built cable car (that’s right ladies and gentlemen, a cable car that does nothing but take people to the bath and back – now if that isn’t indulgent, I don’t know what is). 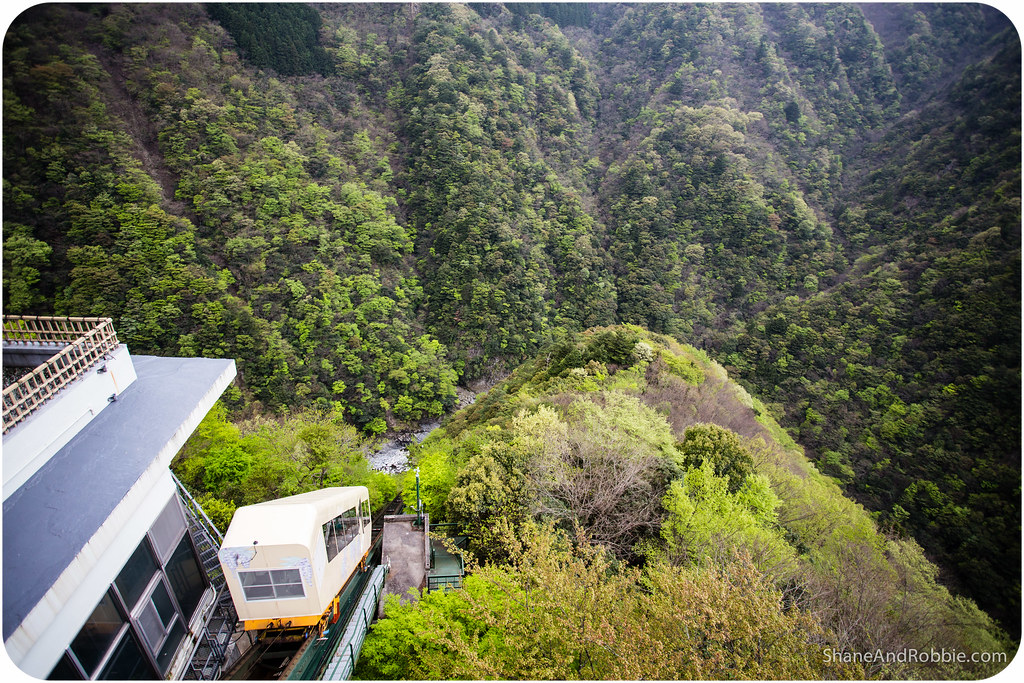 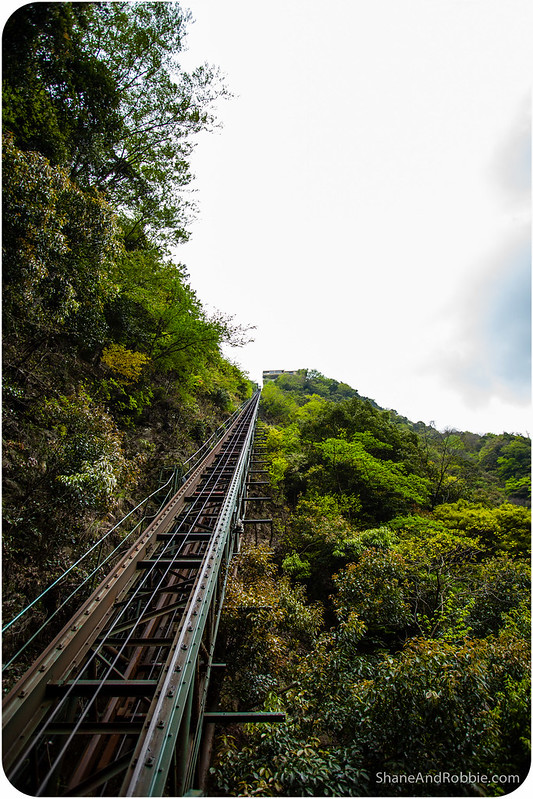 The onsen pipes water from a natural sulphur-rich hot spring and delivers into the rotenburos (i.e. open-air baths), where you can sit and enjoy a panoramic view of the valley, whilst pondering life’s wonders and mysteries. There is a men’s and a women’s onsen, as is usual in most ryokans; the icing on the cake, however, is that they also have a smaller private onsen here that you can book. Total awesome as it means we could enjoy the epic views together*!

*Also awesome as it also meant we didn’t have to become the focal point of much discreet interest as the other (exclusively Japanese) guests of the hotel watched us (i.e. the giant white people) fumble through traditional onsen protocols. 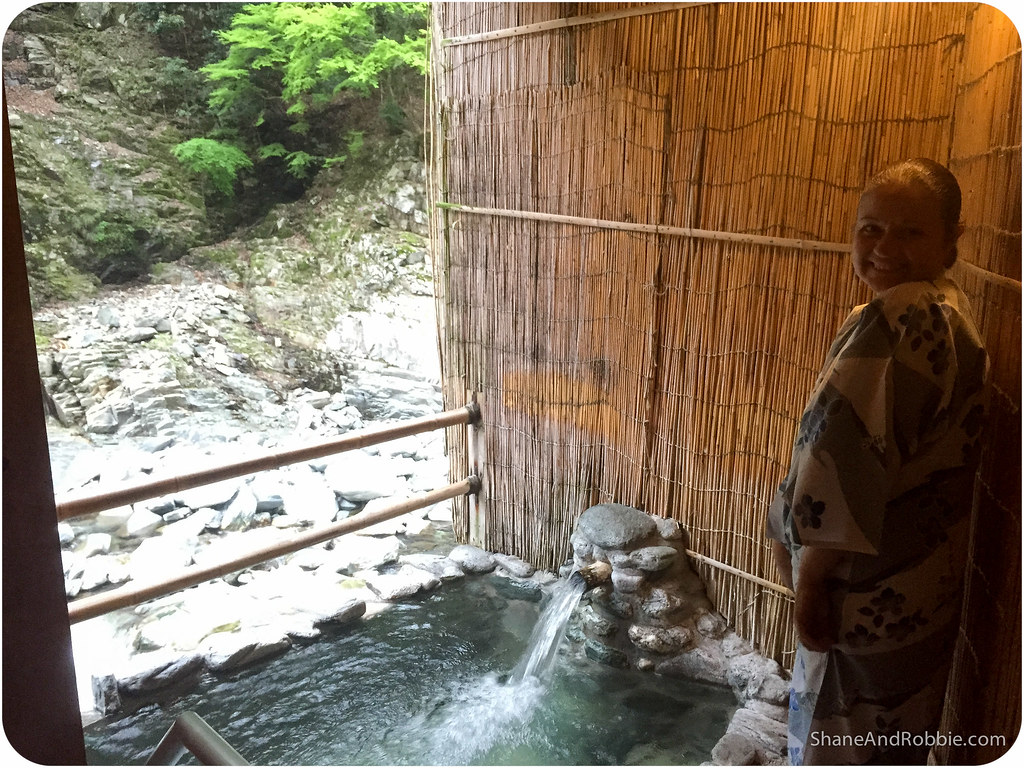 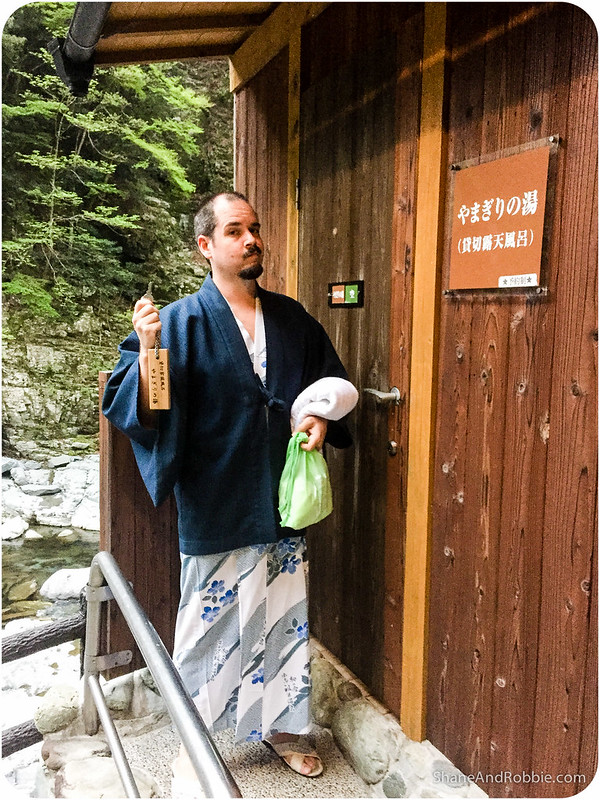 On the cable car ride back up to the hotel we even saw monkeys (Japanese macaque) running through the forest around the hotel and over the old vine bridge nearby. 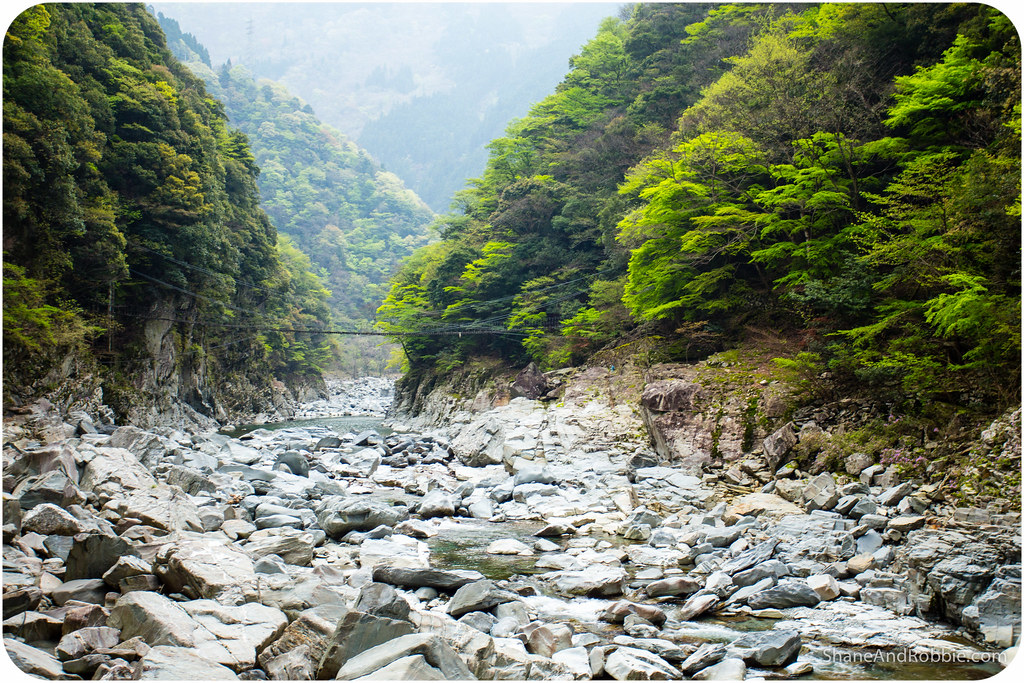 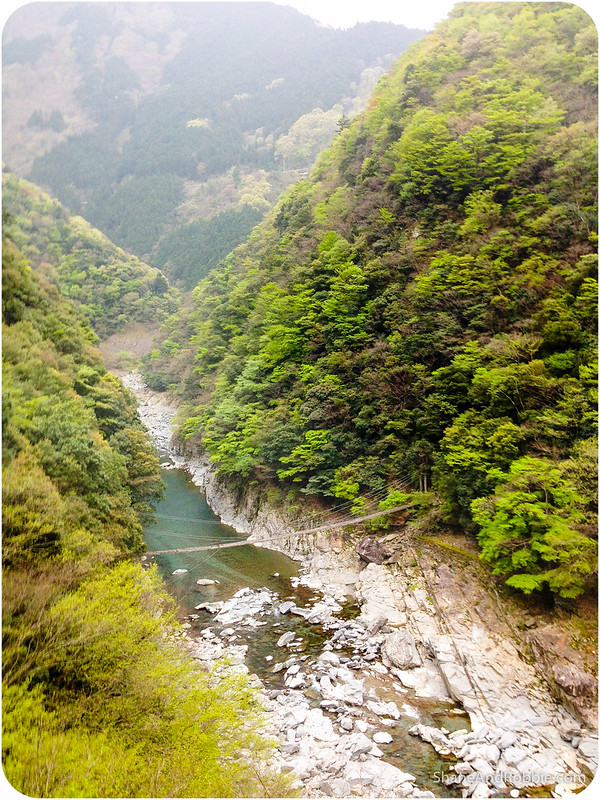 The other highlight of our day was dinner: like last night, it was a 12 course degustation menu of seasonal Japanese awesomeness! The restaurant here has been awarded 2 stars by the Michelin Green Guide so we knew the food would be good, but it surprised us how delectable it all was. To give you an idea of what we got to sample, our menu tonight included:
• Sweet sakura-flavoured shōchū as an aperitif;
• Selection of local spring vegetables, served with a strawberry dipping sauce and a mushroom dipping sauce;
• Iya River trout – the fillets were grilled and served with a miso-based sauce whilst the tail and backbone was deep fried, crunchy and edible in its entirety;
• Sudachi (i.e. a locally grown bitter lemon/mandarin fruit) sorbet as a palette cleanser between courses;
• Steamed local mushrooms, grown locally and cooked with a bulb of garlic for flavouring;
• Miniature vegetable and pork nabemono (i.e. hot pot), cooked over a tiny flame at our tables;
• Locally grown soba (i.e. buckwheat) noodles, served with tempura battered Perilla leaf and fiddlehead greens (i.e. furled fronds of a young fern) – both harvested today from the forest; and
• The best strawberry mousse EVER for dessert. 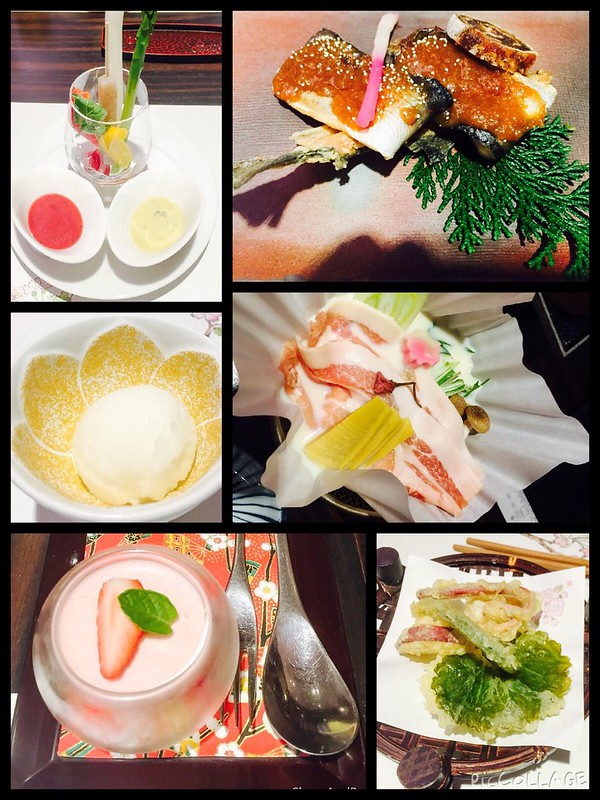 We ate way too much and are now lying back in our beds like a couple of bloated Buddhas watching the rain continuously fall (yes, it’s still raining – though the weather forecast points to conditions clearing overnight). We’re pondering what we might venture out and do tomorrow, though at the moment the thought of living permanently at the Nanoyado Hotel Iya Onsen seems pretty tempting…. 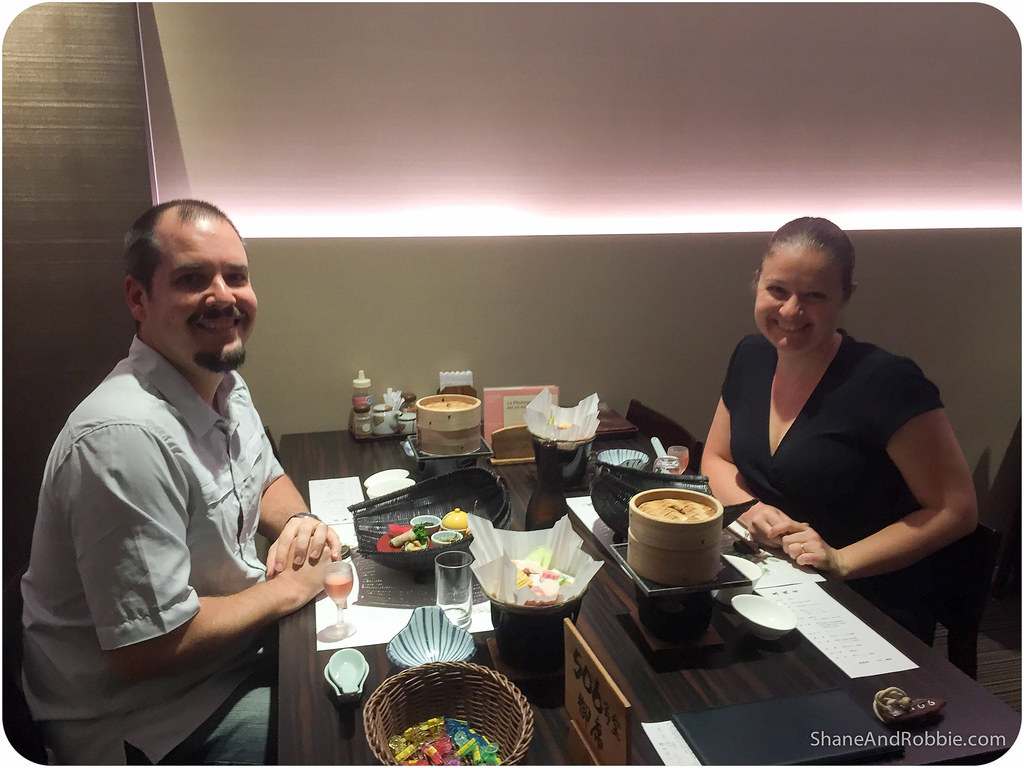