The Iya Valley is what Japanese people call tooi inaka (i.e. the deep countryside); this is rural Japan at its most inaccessible and rustic. This is also Shikoku at its most spectacular. 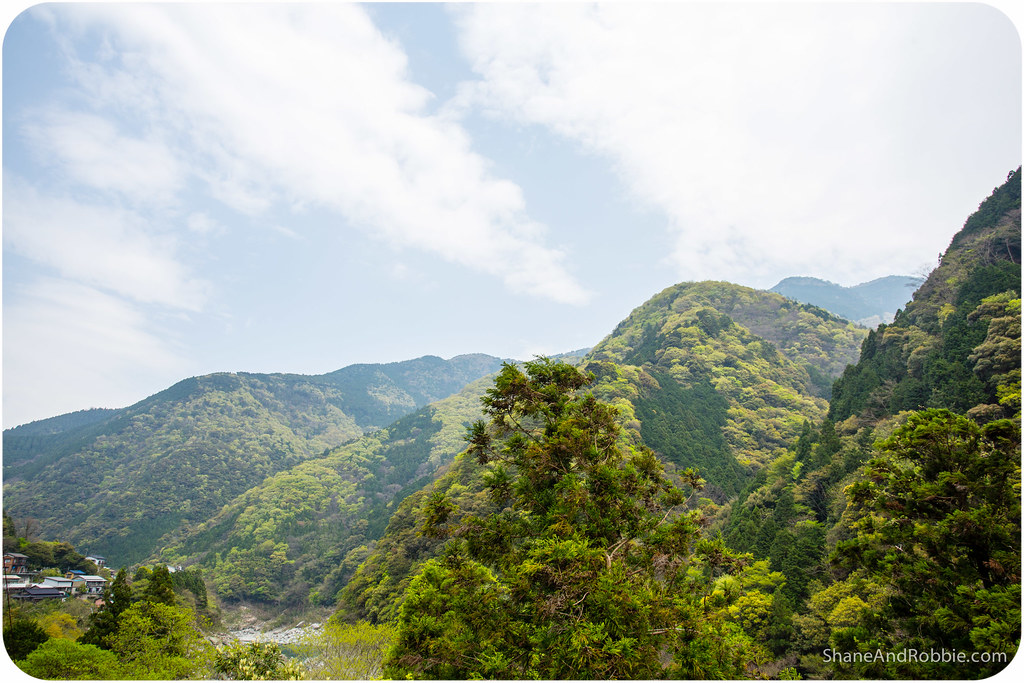 The Iya Valley is geographically in the centre of Shikoku and is one of Japan’s least visited and most undeveloped areas. The steep mountain valleys, narrow roads and limited public transport links have kept this corner of Japan relatively unexplored, at least by large scale mass tourism. Even for us, getting here was a bit of adventure – we caught the train from Tokushima to the town of Awa-Ikeda and then rented a car* to drive around in.
*Describing the roller-skate we’re driving around in as a “car” is quite generous. It sounds like a lawn mower, drives like a scooter, and looks like a toy. Perfect for Japan’s tiny roads and narrow laneways! 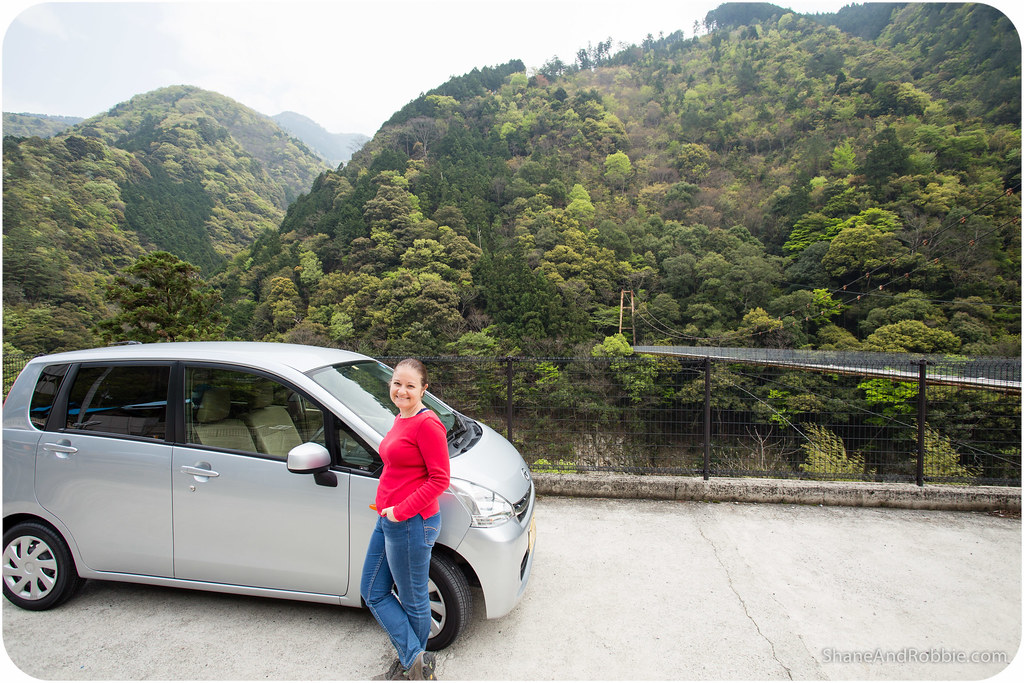 Driving through the Iya Valley today was both splendid and terrifying: the roads are narrow and very bendy-curvy, with sheer cliffs on one side and precipitous drop-offs on the other. But the views were just incredible. Forested valleys a kilometre deep; tiny villages clinging to the sides of steep mountains; and rocky gorges formed over the millennia by the Iya-kawa (i.e. Iya River) winding its way down towards the ocean. 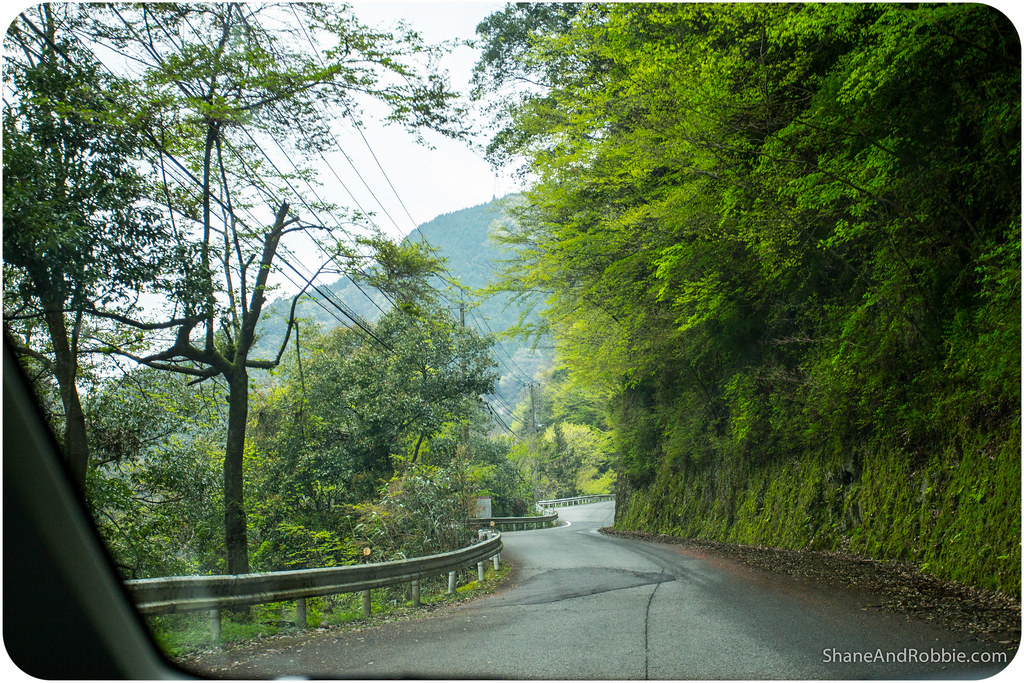 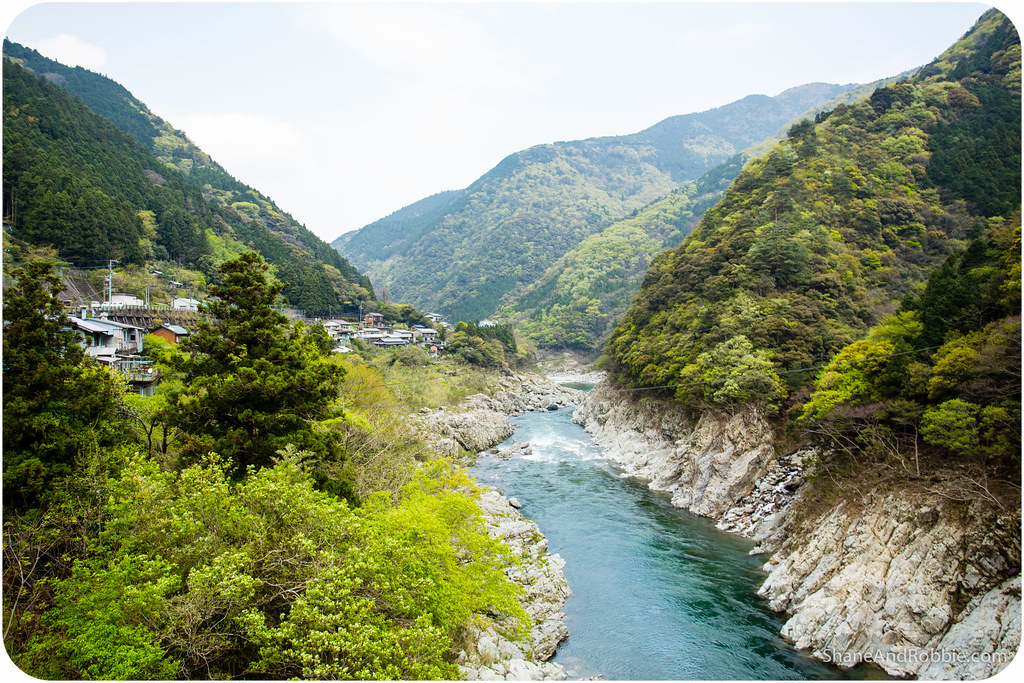 Access through the Iya Valley has improved significantly in recent years, with roads and bridges now connecting all the villages to the rest of the world. This is a relatively new thing, however, with many of these rural hamlets remaining isolated and only accessibly by foot (or donkey if you had one) until the mid-1990s. It is because of this isolation that the Iya Valley still allows for glimpses into how life once was in rural Japan. 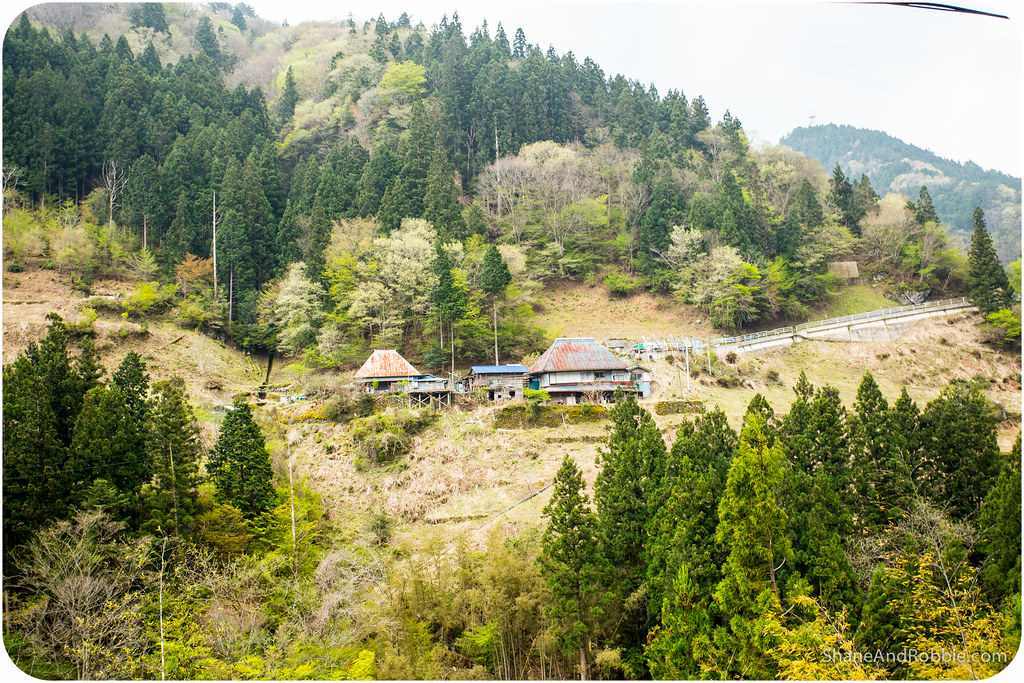 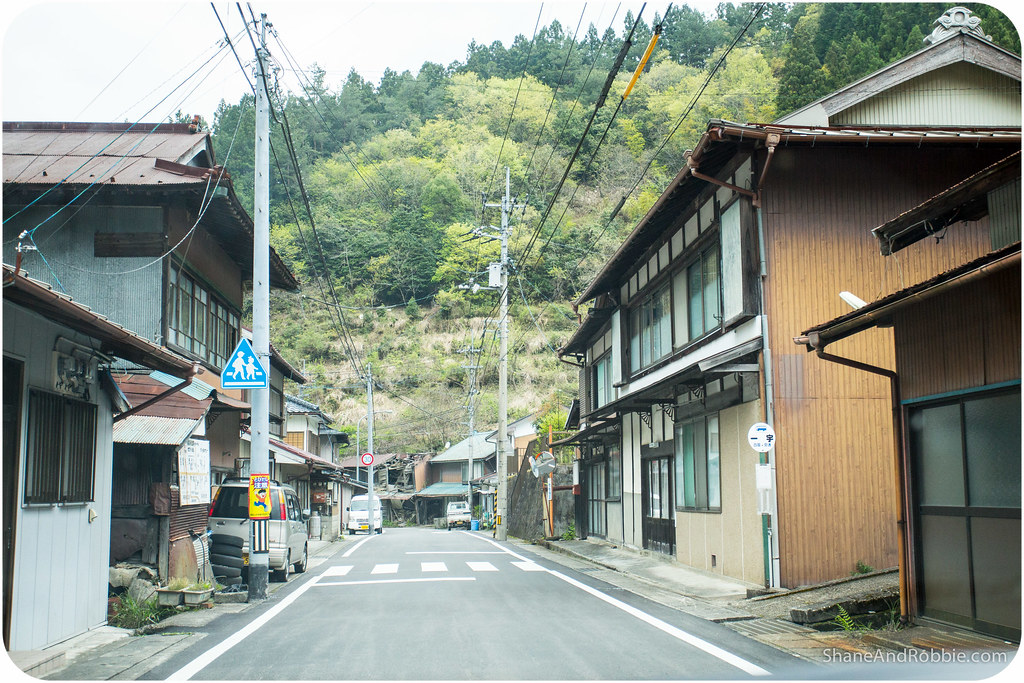 Driving through the valley today we passed through a number of tiny townships where the houses were literally lined up along the road, and where many homes are built on heavy steel scaffolds, perched over the cliffs, simply due to the lack of flat space. We also saw lots of old places, abandoned and left to ruin. Unsurprising in such a remote and undeveloped part of the world, where younger generations no doubt move out to nearby cities were work is plentiful and the facilities more modern. 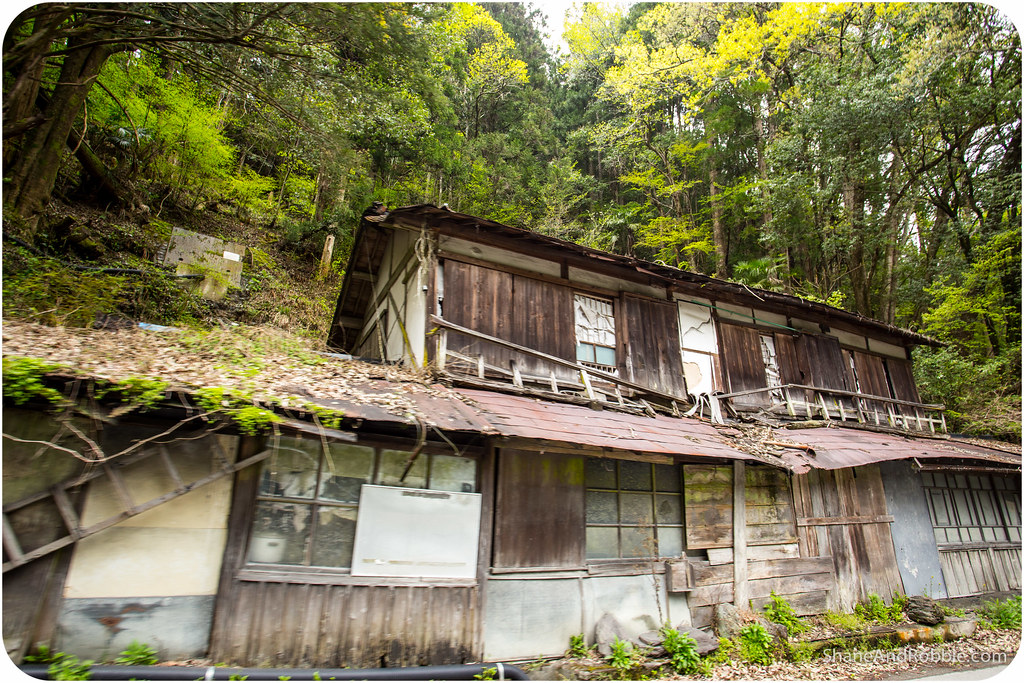 We drove through two of the more renowned gorges in the area: Oboke Gorge and Koboke Gorge. These narrow, steep-sided gorges were formed by another of the valley’s rivers: the Yoshino River. In Oboke we did a short “pleasure cruise” along the river, just to see the gorge from a different angle. The emerald green colour of the water was incredible, especially at its deepest points (the river is 180m deep at its deepest point). 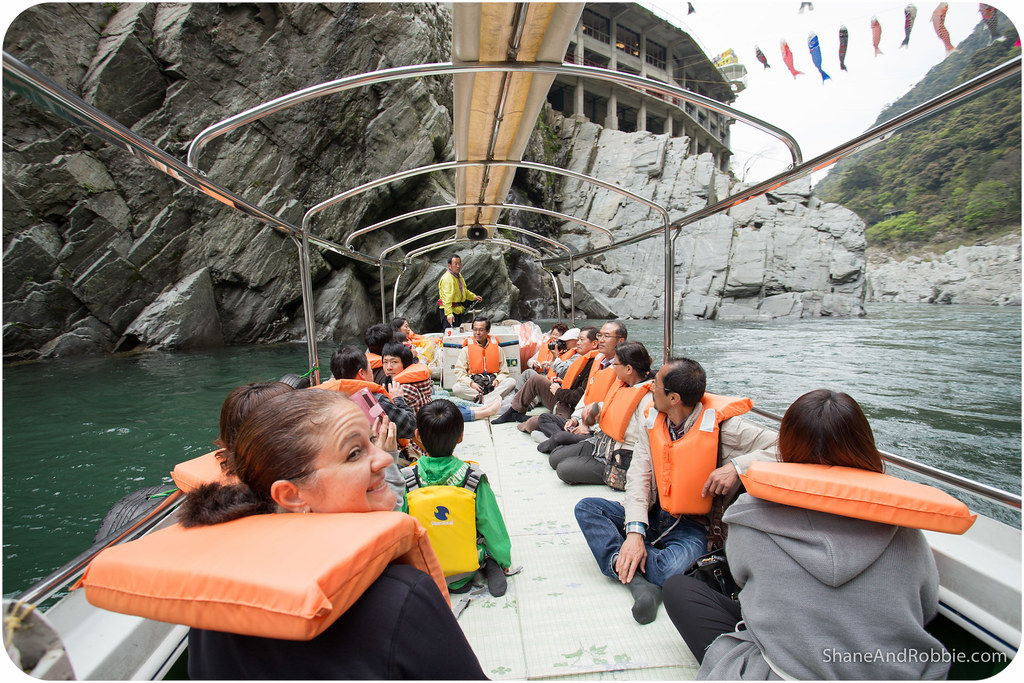 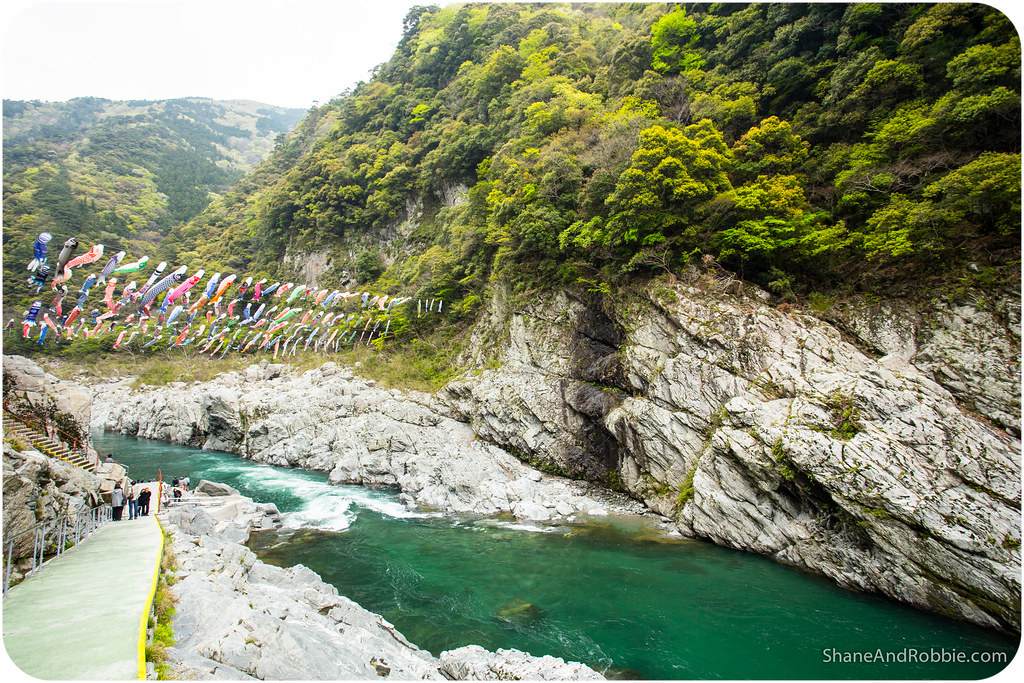 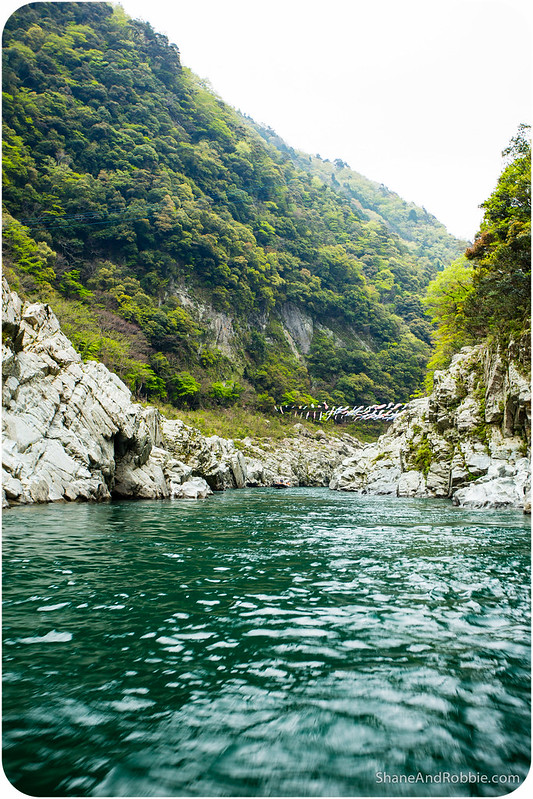 For lunch we stopped at a picturesque little soba (i.e. buckwheat) noodle place, positioned right beside the Yoshino River. Soba noodles are traditionally eaten here, rather than rice, as the steep slopes of the valley don’t allow for rice farming. Buckwheat, yams and potatoes are easier to grow here and thus were the staples for peasants in the Iya Valley. 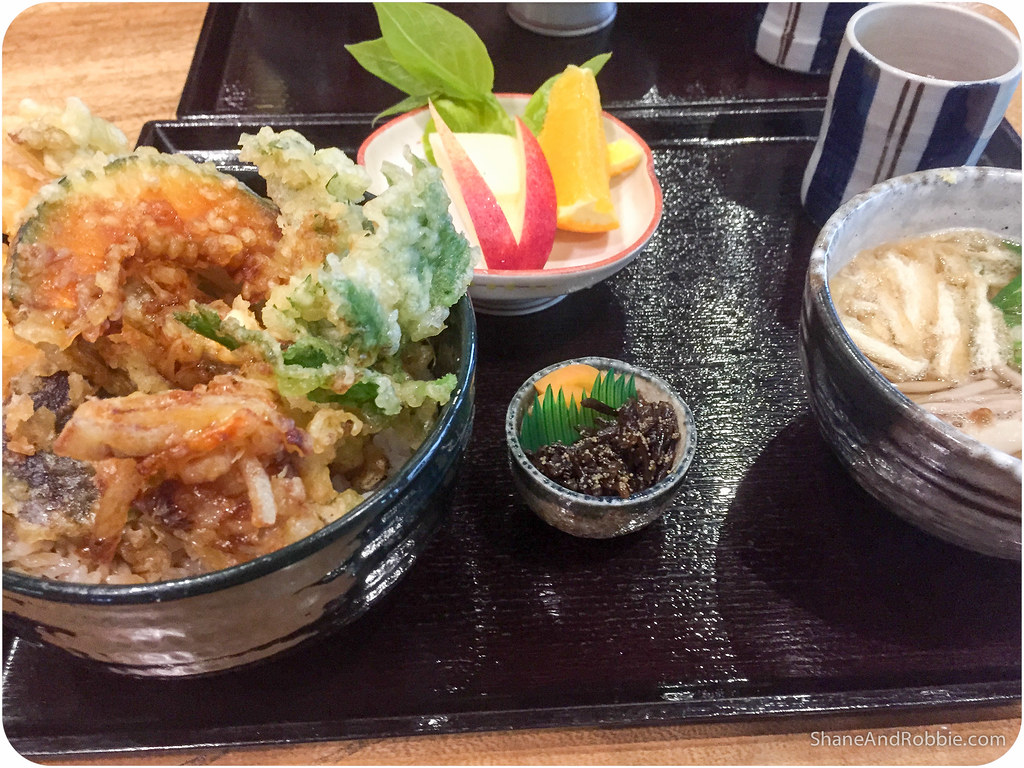 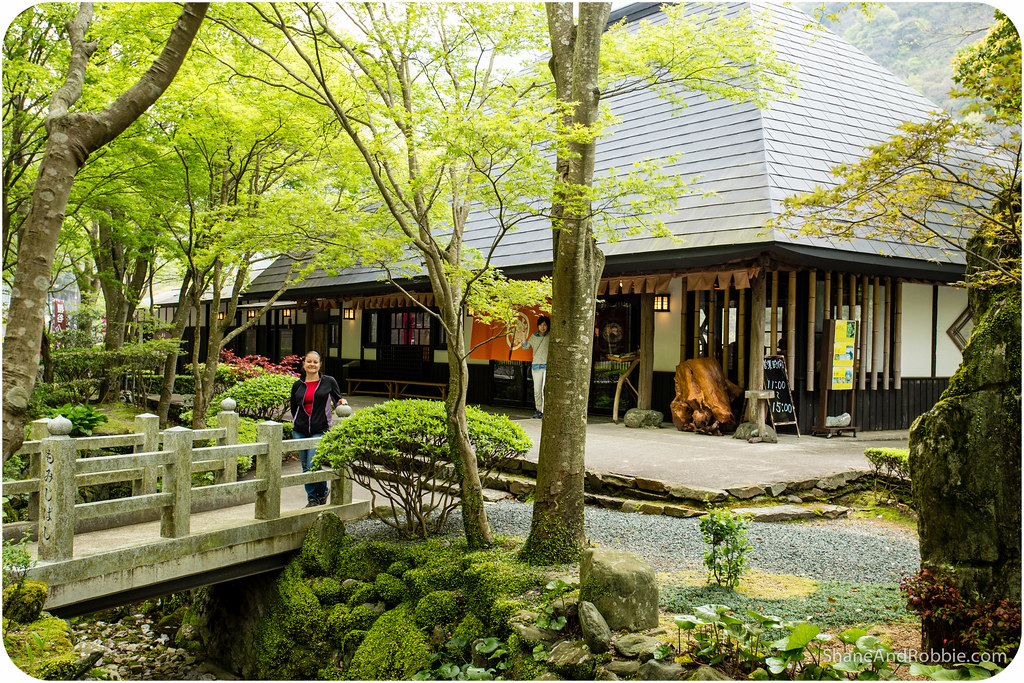 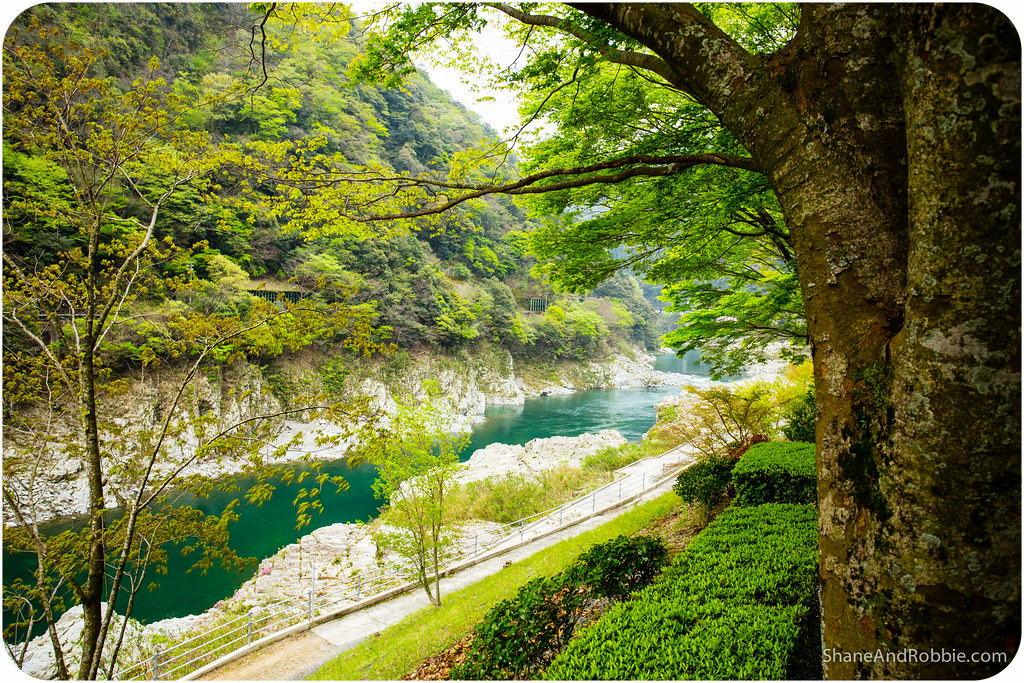 After lunch we continued on to the Iya Valley’s most famous landmark: the iya kazurabashi (i.e. the iya vine bridge). This 45m long bridge is made of wooden slats held together by vines, in a style characteristic of this region. 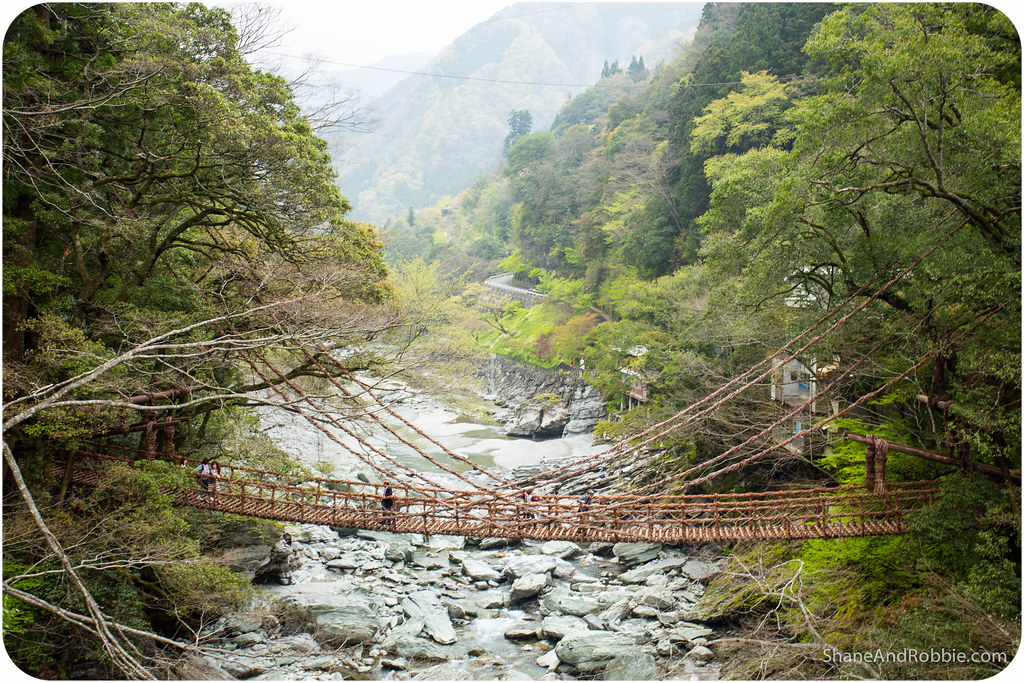 Due to their inaccessibility the inner parts of Shikoku have historically been a favourite retreat for refugees and defeated warriors. It was a group of fleeing 12th century warriors who were the first to build these vine bridges. The bridges were designed to help the escapees get across ravines and rivers quickly. Their construction, however, meant that these bridges could quickly be cut down should pursuers draw near. 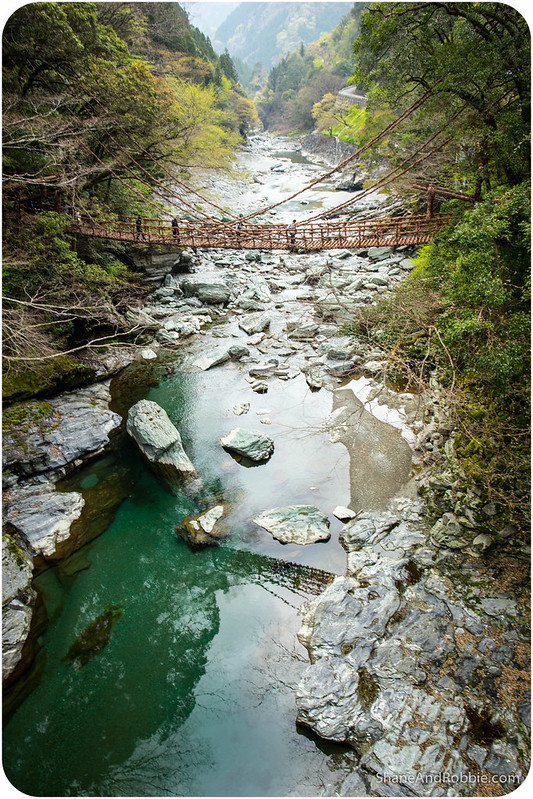 The iya kazurabashi is today just a tourist attraction – there are no fleeing warriors in sight. For a fee we got to walk across the bridge as it swung 15m above the Iya River. For someone who gets vertigo easily (i.e. me), crossing the bridge was a white knuckled experience; Shane had no problems skipping across, however, despite the swaying of the bridge and the wooden slats being a good 15-20cm apart*. I can’t imagine having to run across the bridge in a a hurry whilst trying to get away from some pursuing enemy!
*15-20cm is almost wide enough a little foot like mine to slip through. It’s also a wide enough gap that you can see alllllllllllllll the way to the river below. 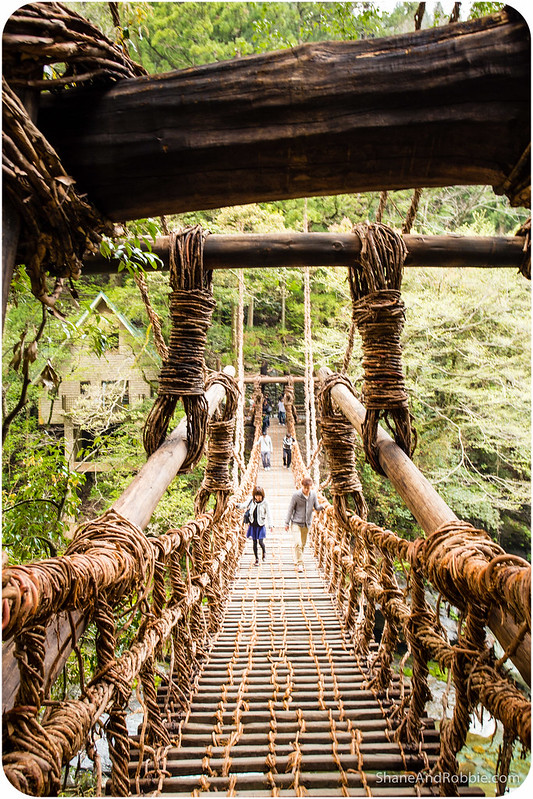 By this stage it was time to drive our little tin can around a few more bends towards our home-away-from-home for the next couple of days: the Nanoyado Hotel Iya Onsen. This secluded, high end ryokan (i.e. traditional Japanese guesthouse) is perched on the side of one the steep ravines in the central Iya Valley. It’s not at all the sort of place we normally stay in, but given the epic location we’re in, we decided to treat ourselves to a couple of days of Japanese-style comfort. The views* alone make this place worth the expense!
*Note: The photo below is the ACTUAL view from our room. 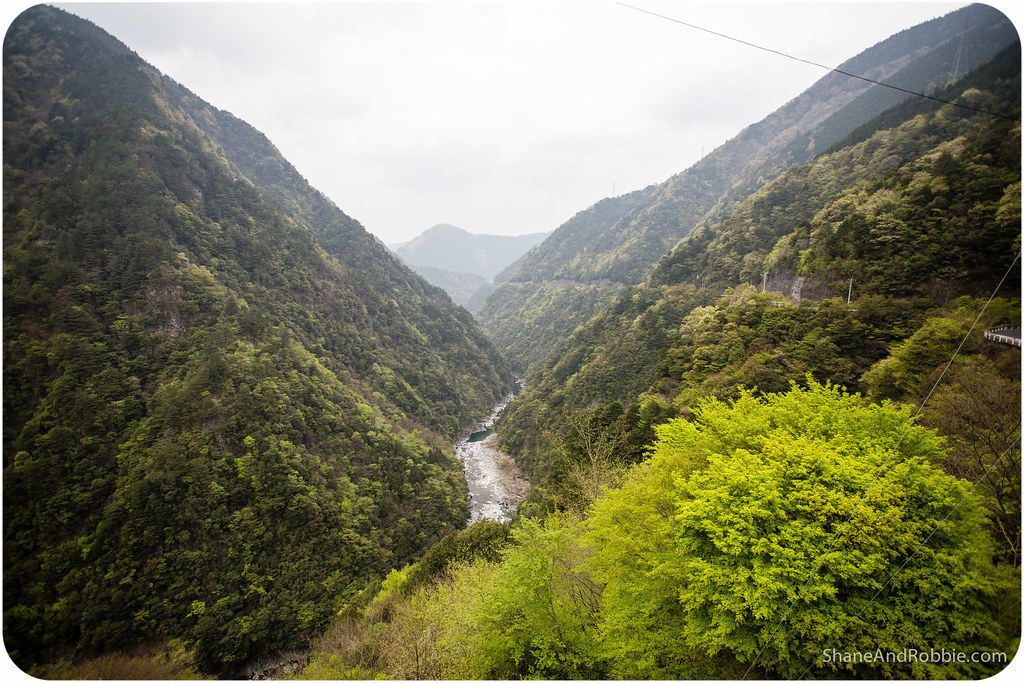 We were welcomed with green tea and house-made sweet treats, and shown to our rooms by a lovely lady dressed in a kimono. Our room is very traditional, with tatami mats on the floor, a low table to sit at, futon bedding for sleeping, paper screens dividing the living and sleeping areas, and no shower or bath in the room (we have to use the communal onsen downstairs). It’s all very, very cool – and we haven’t even had dinner* yet!
*Like most ryokans here in Japan, our stay includes dinner and breakfast. 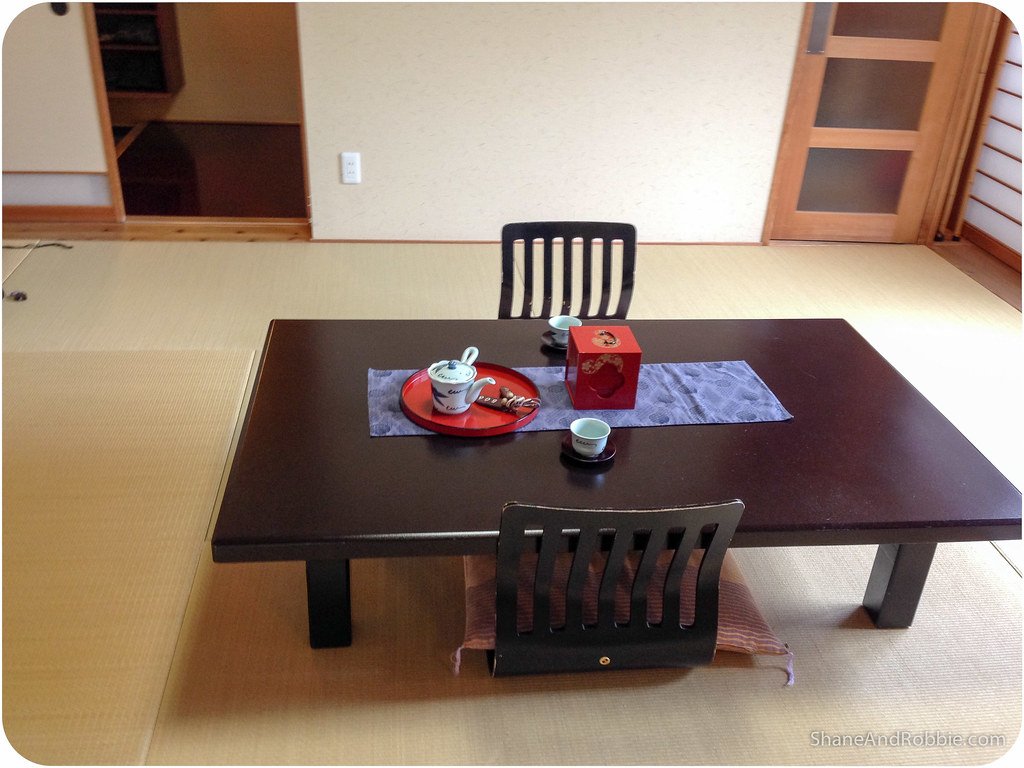 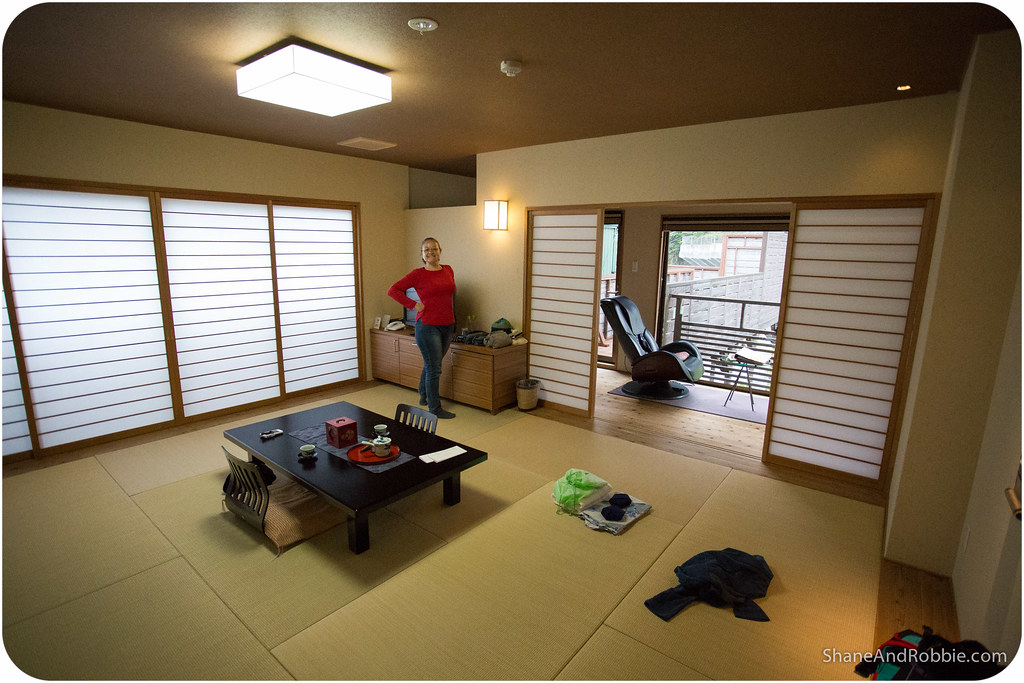 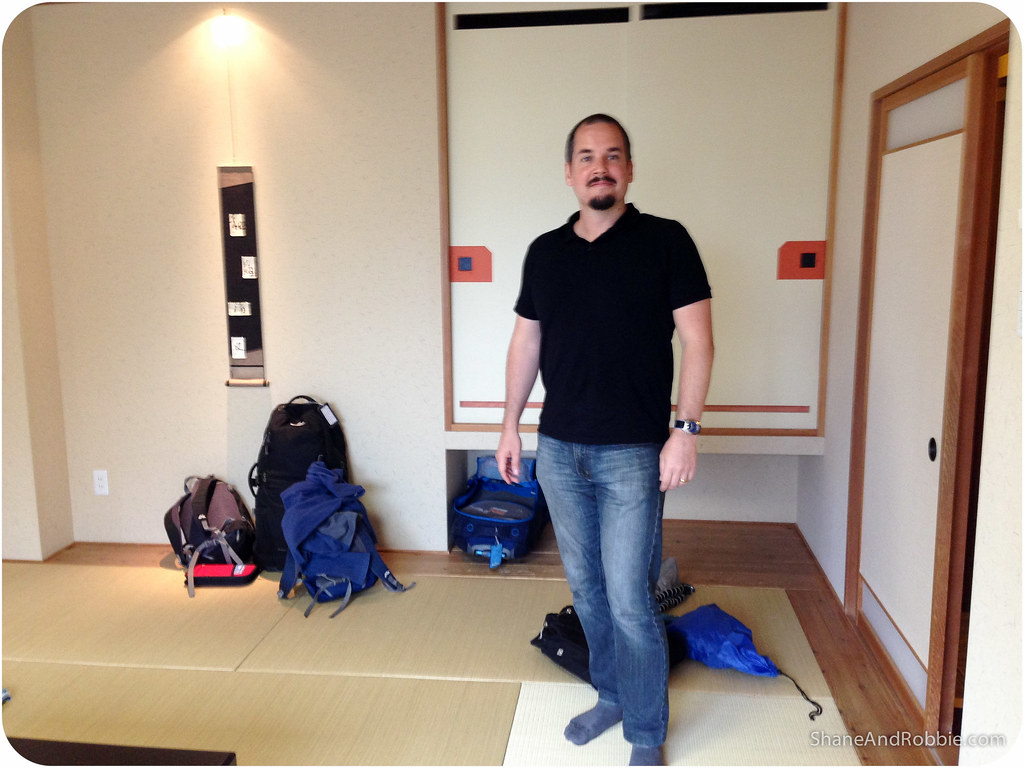 We’ve wanted to visit the Iya Valley for a few years now, ever since National Geographic did a story on Shikoku (see http://travel.nationalgeographic.com/travel/countries/shikoku-japan-traveler// for the story). It’s taken us this long, however, to actually make it down here. Has it worth it so far? Absolutely! 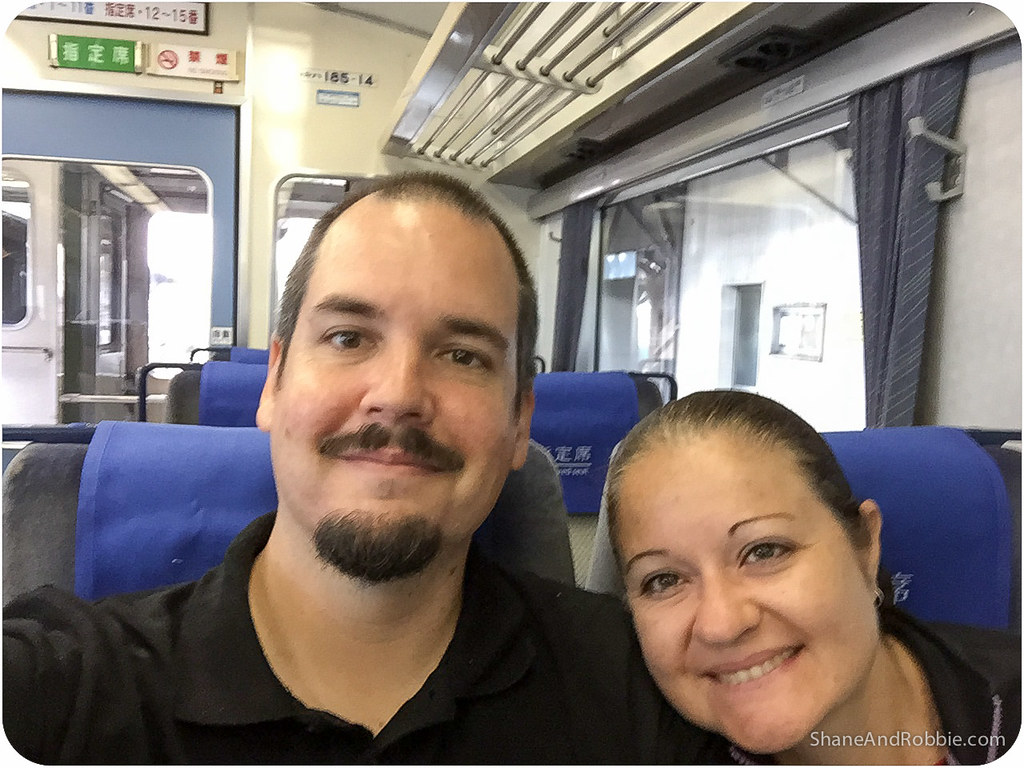