We left Shikoku and all its mountains, valleys, temples, shrines, tiny villages and great cities behind today, bound for Kyushu. Most of our day was taken up in transit, with the ferry ride across the Bungo Channel being the highlight of our day. 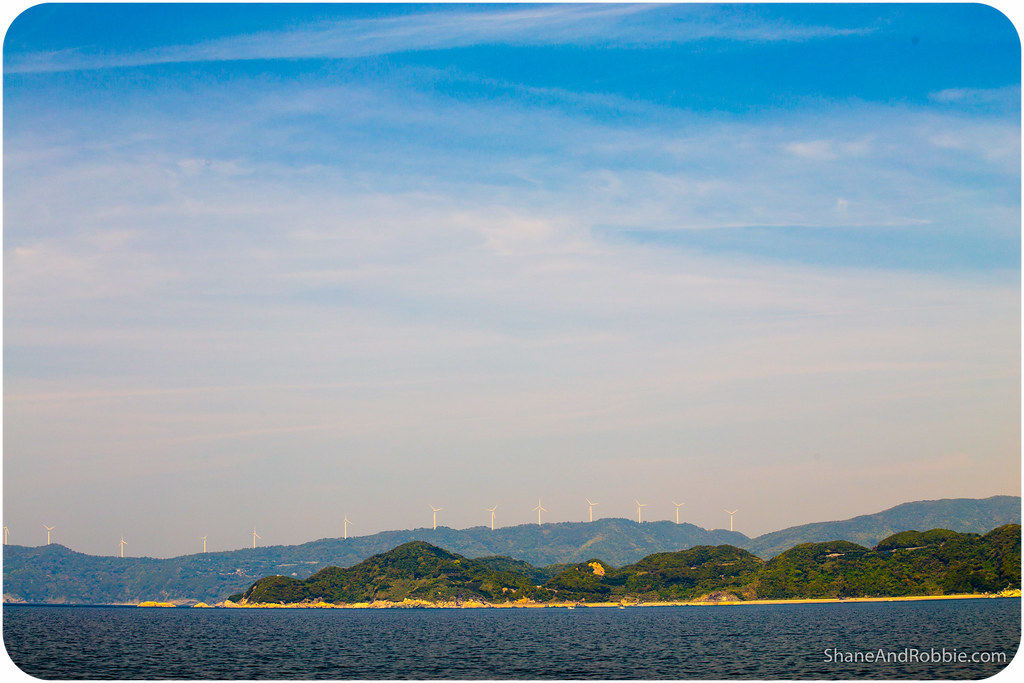 Our ferry left from the sleepy little port town of Yawatahama in Western Kyushu. To get there we caught an early train from Matsuyama and watched out the window as the morning sun painted towns we passed through golden. 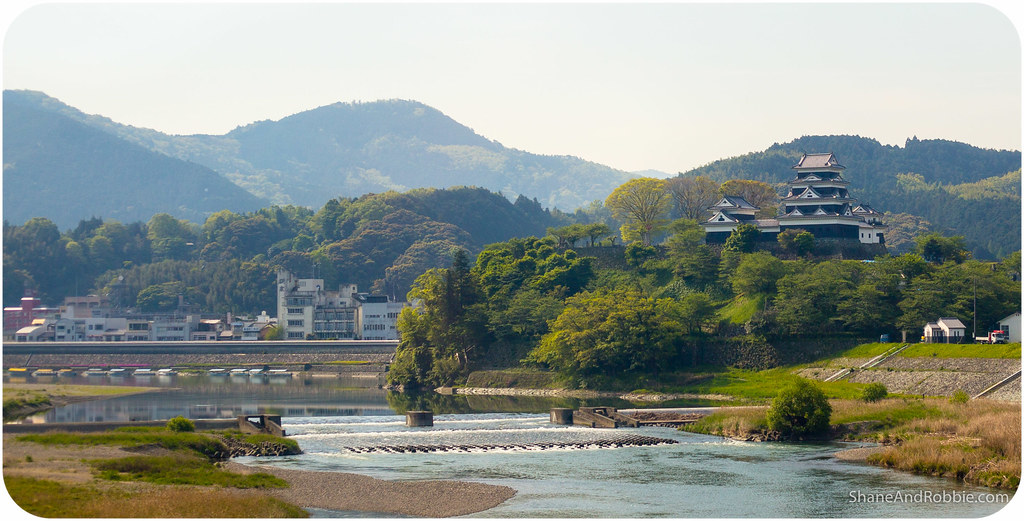 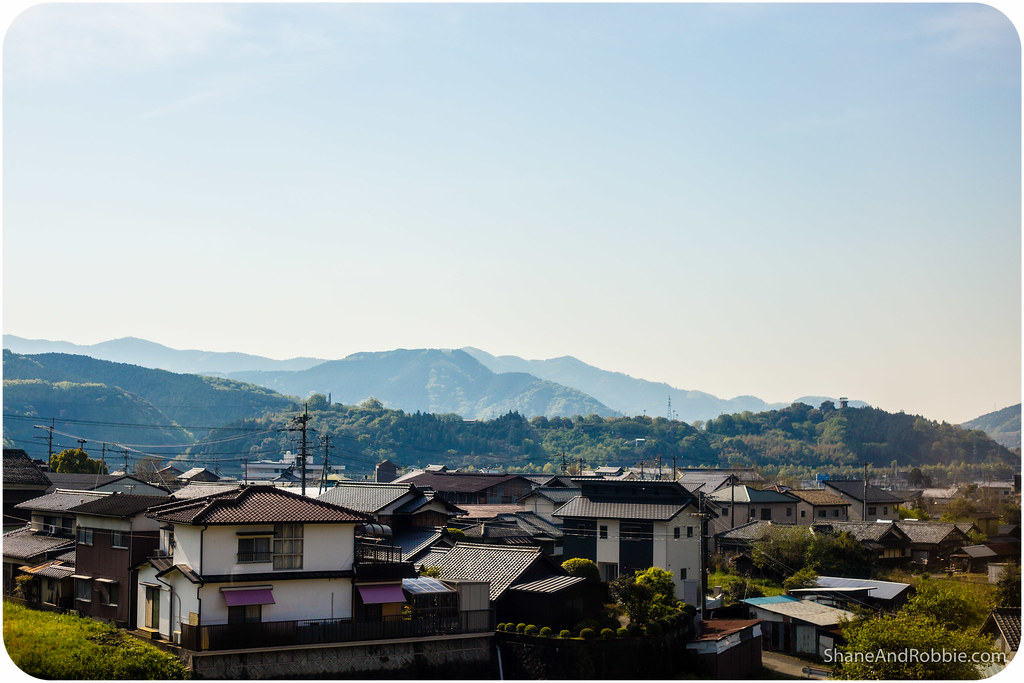 As a side note, the train we caught was hilarious – it was painted all in bright colours and themed with animated characters like Anpanman. Anpanman is superhero whose head is made of bean-paste filled bread and who leads a posse of bread-themed do-gooders against the wicked but hapless Baikinman (i.e. Bacteria Man). These odd but lovable characters are mascots for Japan Railway (JR) and are emblazoned on a number of trains. Very cute, if a little disturbing at 7:00 in the morning. 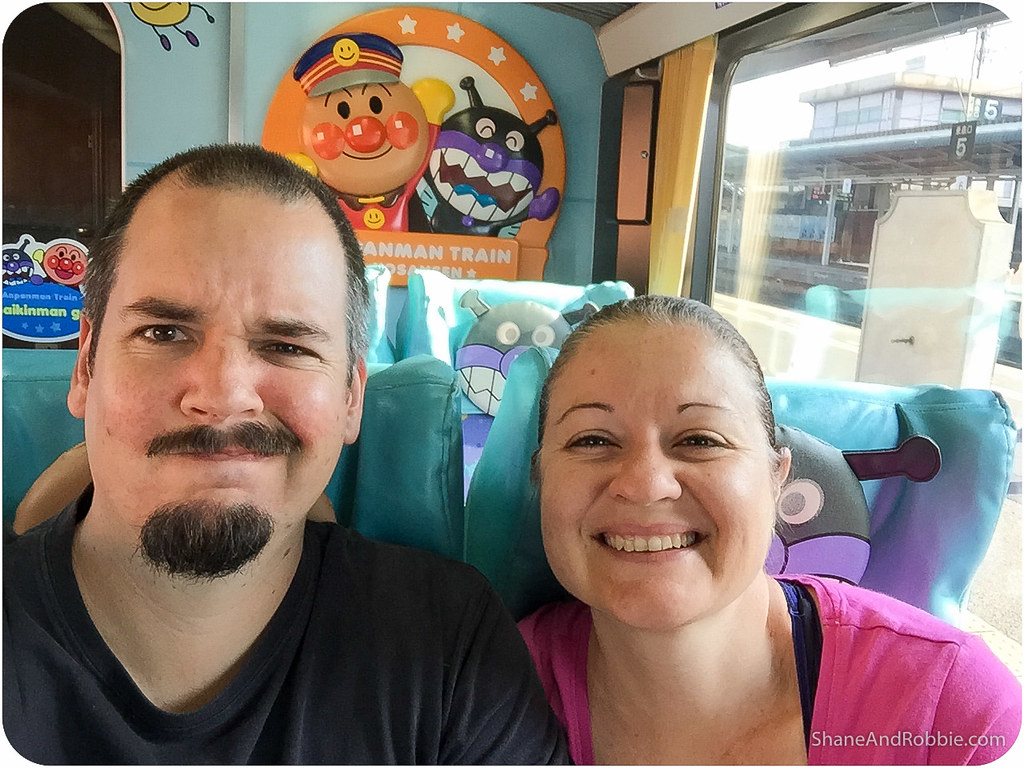 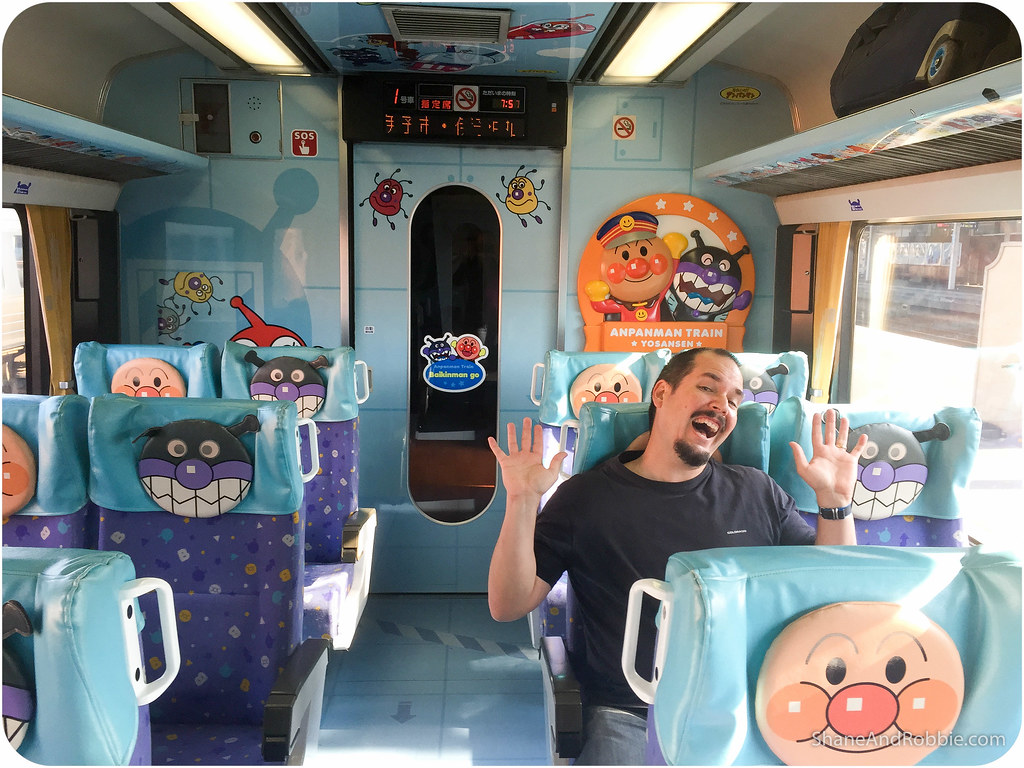 Once in Yawatahama we got our one way tickets to the town of Beppu, in Kyushu. It was great to be down by the sea again, breathing in the fresh ocean air and enjoying the blue skies and sunny weather. One thing we noticed that was quite weird was that there were no seagulls at all down by the port. We wondered if the Seto Inland Sea is so over-fished that there are no fish left to support sea birds either? Whatever the cause, the lack of gulls certainly made things more peaceful, but it was really strange being by the sea and seeing no sea birds at all. 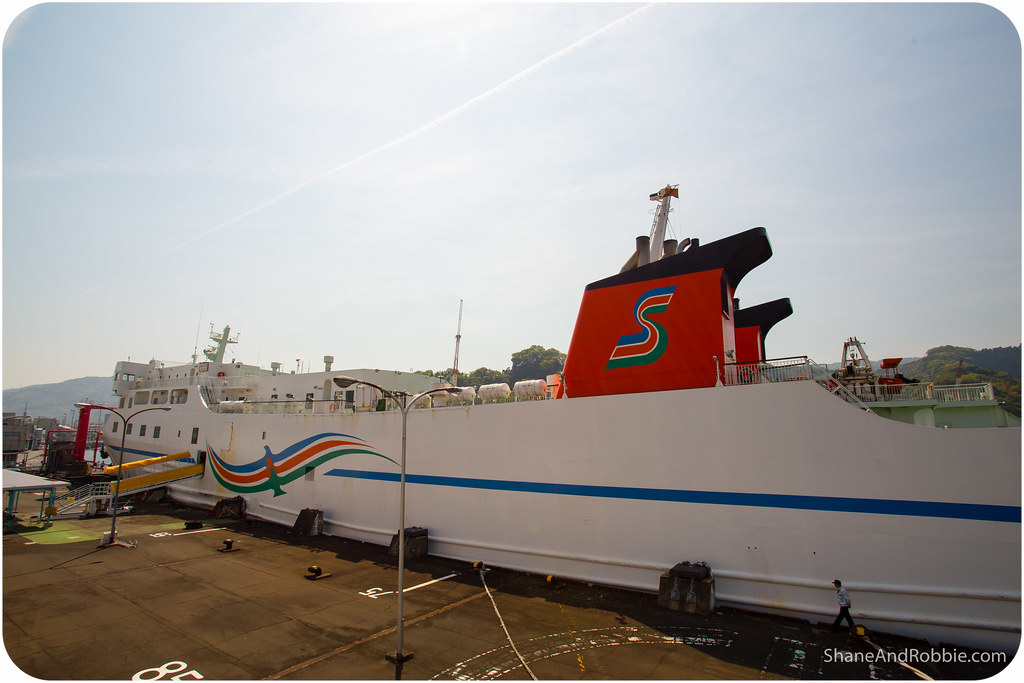 The ferry trip across the strait that separates Shikoku and Kyushu took about 3 hours and was blissfully uneventful. There was no swell to speak of and barely a zephyr of breeze. We passed a few small, uninhabited islands along the way, and passed the time reading and relaxing. 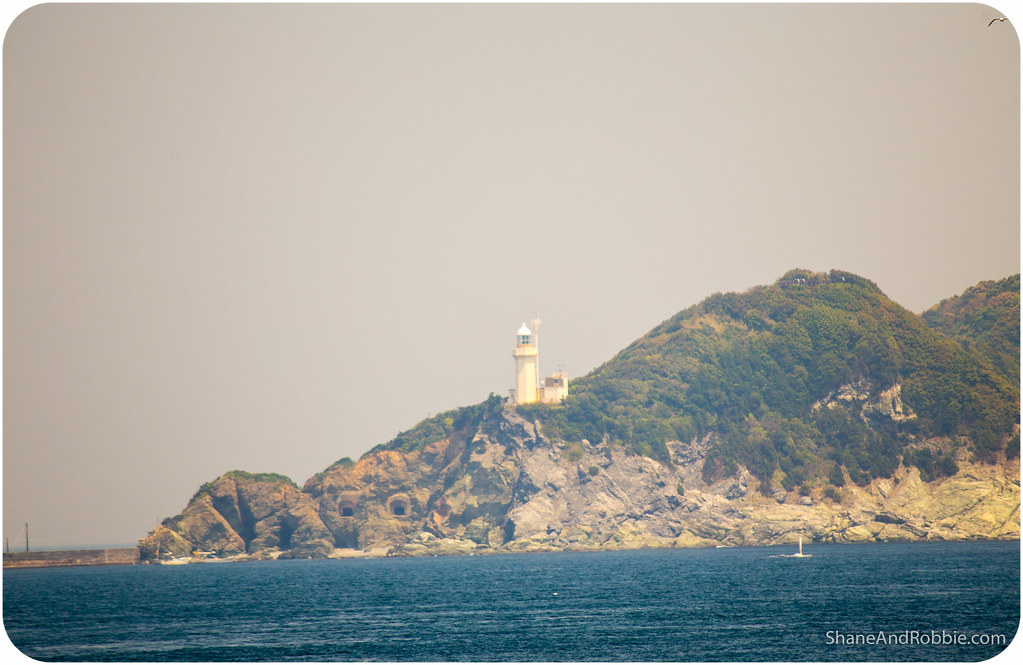 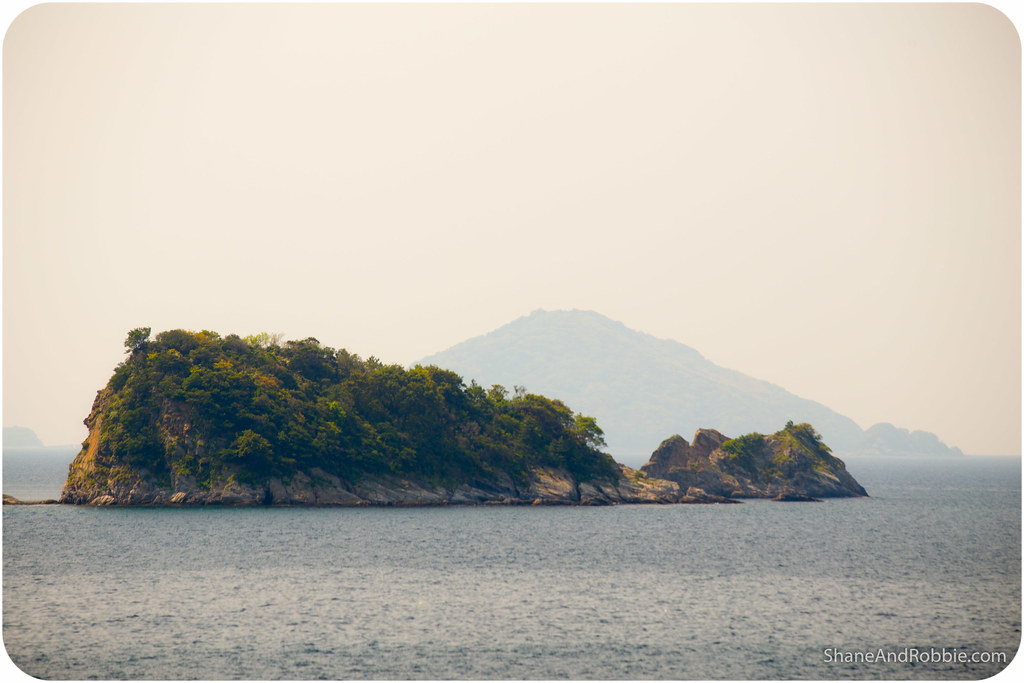 We made it across to Kyushu in good time and were soon disembarking. Kyushu is Japan’s Southern-most main island and also the most volcanically and geothermally active of the 4 big islands. With sandy beaches and a climate that borders on the tropical, Kyushu is also said to be very laid back (by Japanese standards anyway). We’ve only just arrived and already the sun, beaches and palm trees have US feeling more chilled out, so it makes sense that the locals would be a bit more casual than on the mainland. 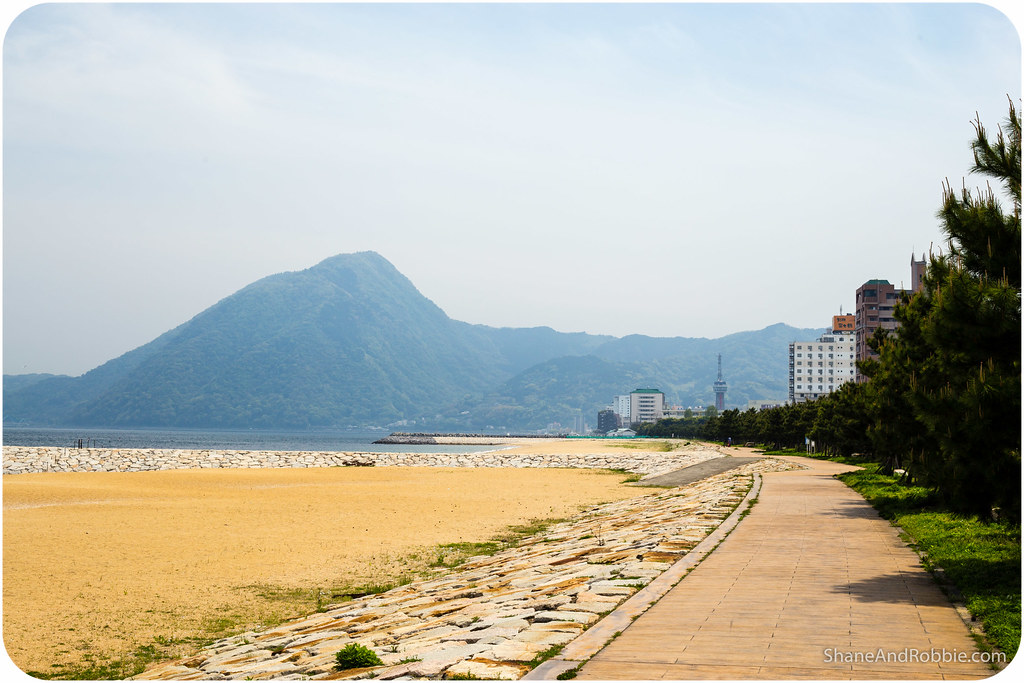 Our first stop here in Kyushu is the small holiday town of Beppu. Beppu is one of Japan’s most famous beach and hot spring resort towns; there are more natural hot springs in and around this town than anywhere else in the country. People come here to bathe in the sulphurous waters, get buried in hot stinky sand, and hike up the many (active) volcanos in the area. With a permanent population of just 125,000, Beppu is quite small, but its beach-front is all hotels, all waiting for summer when the holiday-makers flock here from all over Japan. 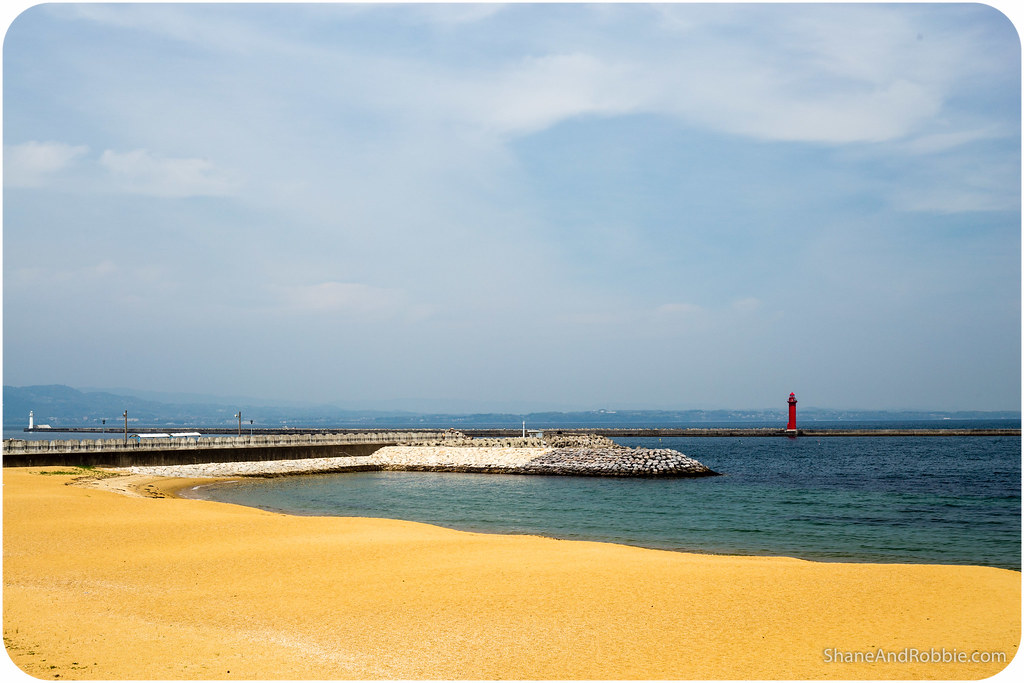 Beyond the beaches and the hot springs there’s not too much to see in Beppu itself so we spent the afternoon strolling along the beach and cruising through the shopping centre next door. Our most exciting find of the day? The fruit section of the supermarket! The price of fruit and veggies here is extraordinary. We understand why: with land in short supply, fresh produce attracts a premium. But how would you like to pay to 12,000 Yen (about $120 AUD) for 3 mangoes? Or 4,000 Yen (about $40 AUD) for a rockmelon? My personal favourite: 50 cherries for 5,000 Yen (about $50 AUD). Yikes! Lucky for us cabbage* is cheap.
*Cabbage is our veggie staple in Japan – you can never get enough cabbage (in salads, on sandwiches, cooked with your noodles, etc)! Cabbage is the king of vegetables really: it’s cheap, doesn’t spoil easily, can be used in a myriad of ways, and is full of fibre and nutrients. We’ve discovered that too much cabbage can have some (smelly) adverse effects, but that’s a small price to pay for so much goodness. 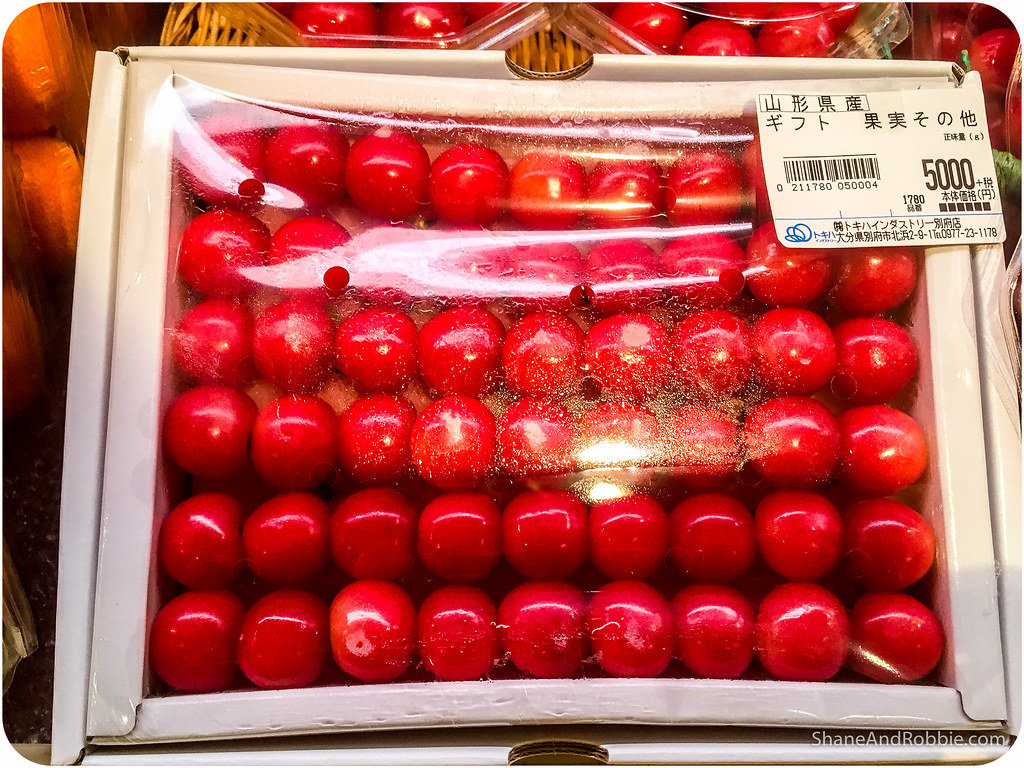 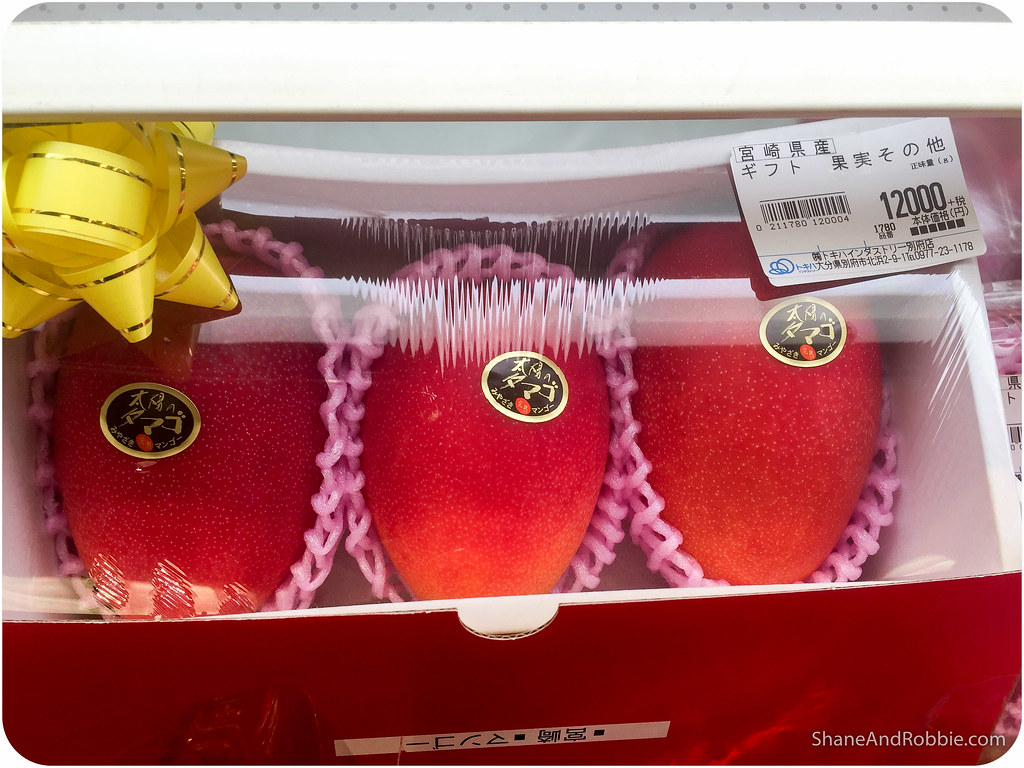 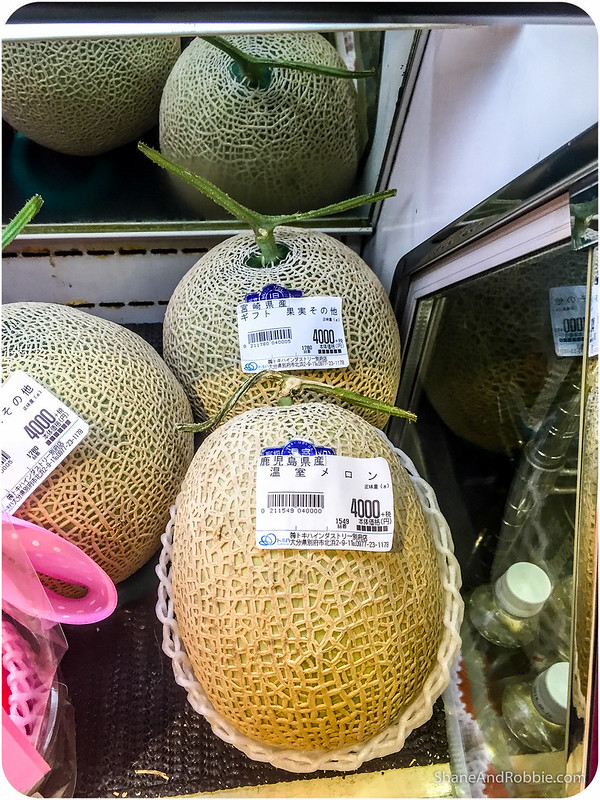 Tomorrow we’re going to explore a bit more of the area around Beppu, but for now we’re looking enjoying some down time and thinking looking back over our photos from Shikoku. Some of our lasting impressions of Shikoku:
• The people seem friendlier, less formal, and generally more outgoing than on the “mainland’ of Honshu.
• The food is great; simple but good. Everywhere we went in Shikoku there was a strong emphasis on locally grown produce and local specialities, with citrus fruits being a recurring favourite addition to sauces and condiments (e.g. sudachi – the sourest lemon/mandarin/orange thingy on the planet).
• The distances are small but travel is waaaay slower than in Honshu thanks to the windy roads and old trains/buses. It’s actually a nice way to travel as you get to see a lot more, you just need to factor the extra travel time into your plans. There ain’t no shinkansens on Shikoku, that’s for sure!
• Overall Shikoku is quite rural and rustic; certainly more so than Honshu but perhaps less so than Hokkaido in the North (where the winters make extensive urbanistaion and development very difficult).
• The scenery is stupendous – especially the mountains.

Our time in Shikoku has come to an end all too soon. We knew we were only going to skim the surface of what this island has to offer, and this visit to Shikoku was a bit of a “taster” for us. A chance to sample some of what there is on offer, to see if we want to come back for more. And yes, we do want more of what Shikoku has to offer! In fact, one day the whole 1,200km of the Shikoku Pilgrimage will be on the cards… 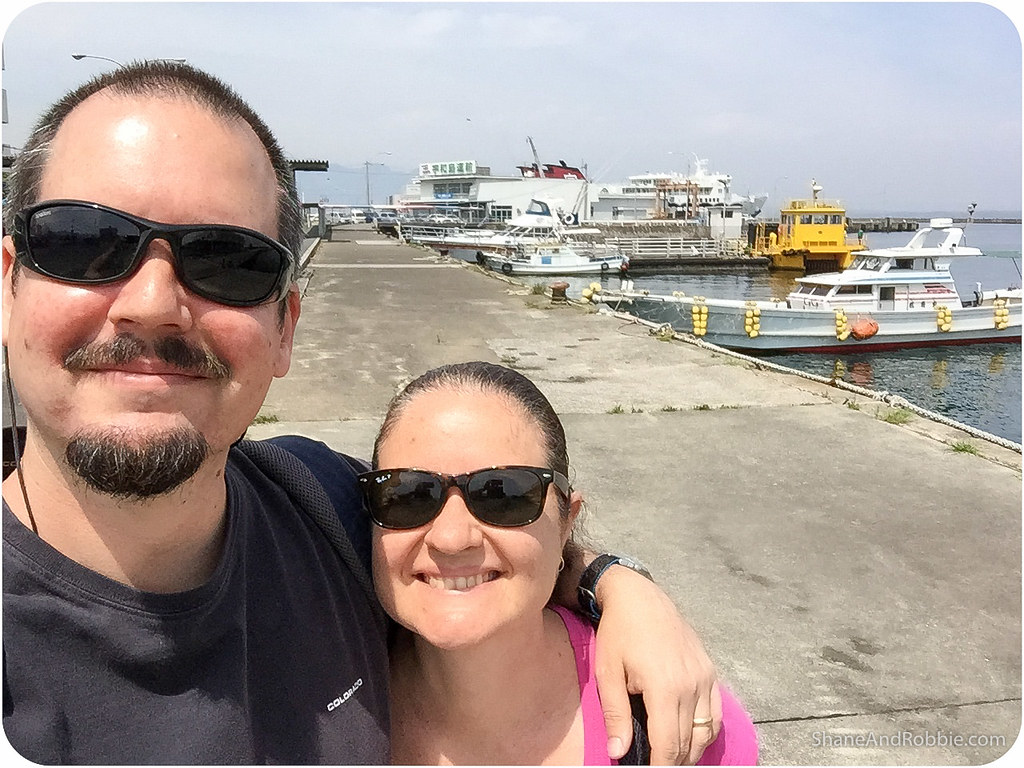