KUMAMOTO IS A BEARY NICE TOWN
Welcome to Kumamoto blog fans, a town famous for 3 things: its castle (Kumamoto-jo), its high-tech industry, and its mascot Kumamon*, the black bear. Kumamon was created by the government of Kumamoto Prefecture in 2010, when the Kyushu shinkansen line first began operating. He was the star of an advertising campaign designed to attract tourists to the region. Kumamon is now one of the most popular mascots in Japan (and there are a lot of them – they do love their cutesy, anthropomorphised mascots around here), and our ever-present friend for the next couple of days. He’s on billboards, on buildings, in shop windows, on t-shirts…., he’s EVERYWHERE!
*Kuma = bear; mon = thing in the local dialect. 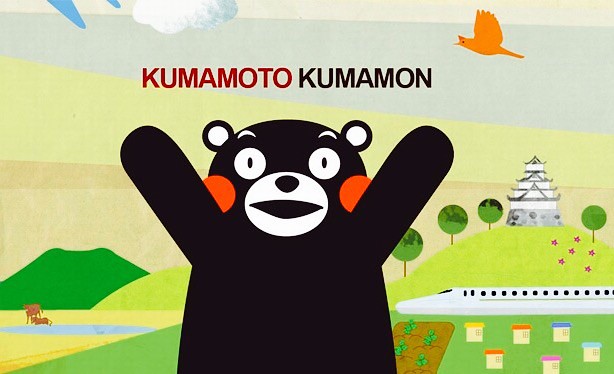 Kumamoto is the capital of Kumamoto Prefecture, and, with a population of 750,000, is one of the larger towns in Kyushu. The city produces most of Japan’s semi-conductors and solar cells, earning it the moniker locally of “Silicon Town”. From our perspective, as new arrivals in town, it doesn’t look very “high tech” or ultra-modern as a town; the vibe is pretty laid back and friendly. People are generally so much friendlier and far more forward here in Kyushu compared to the “mainland” (i.e. Honshu), and nowhere more so than here in Kumamoto. We had all sorts of people approach us and starts random conversations with us today; it makes for a nice change as most people in Japan are too shy or reserved to approach foreigners for a chat. 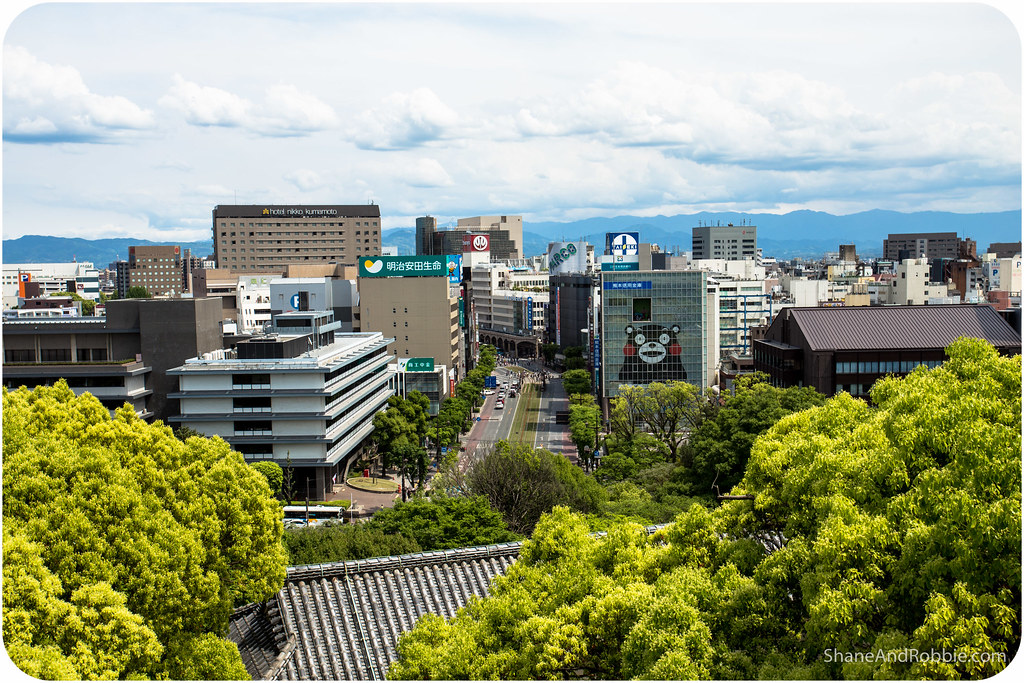 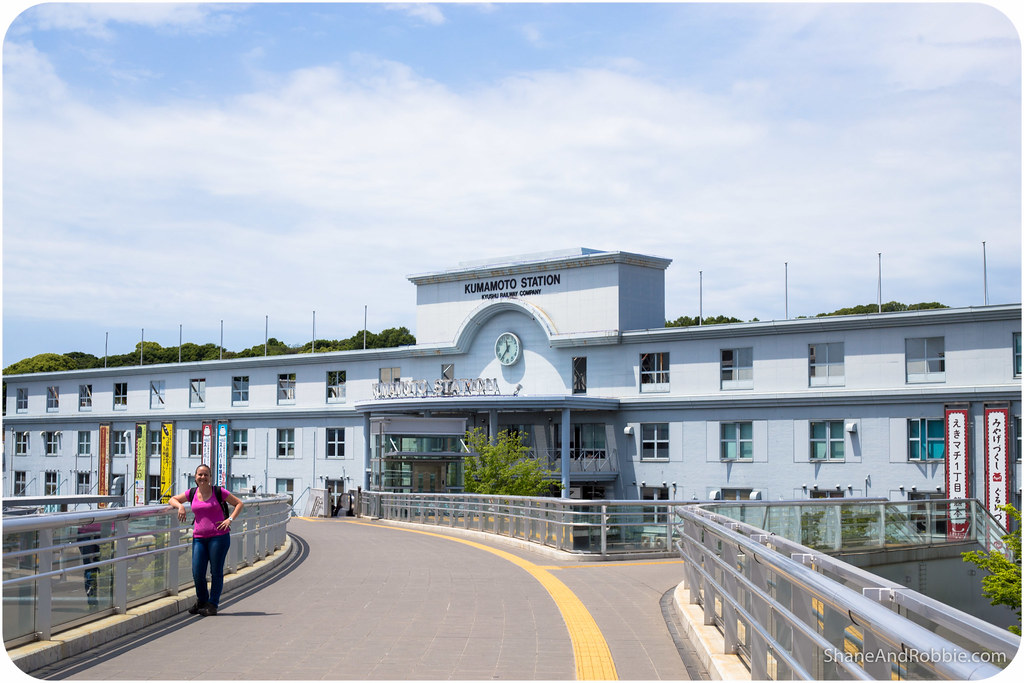 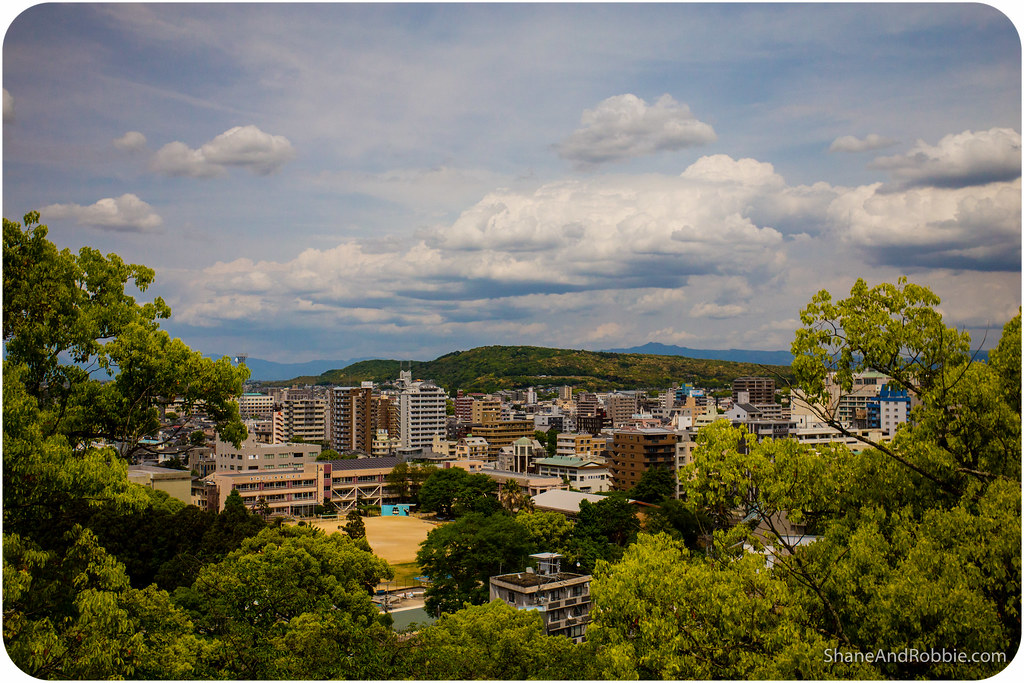 The city’s most famous landmark is Kumamoto-jo (i.e. Kumamoto Castle), one of the most impressive castles in Japan*. The castle and some of its 49 turrets were renovated and reconstructed in the 1990s, beautifully recreating the majesty of this fortified castle. The castle and its grounds are HUGE and contain some incredible trees that have been there from before the castle was even built, as we discovered this afternoon when we went sightseeing.
*It’s actually ranked as one of the top castles to visit in Japan, alongside Matsuyama-jo (which we saw last week), Osaka-jo (which we saw 2 years ago), Matsumoto-jo (which we also saw 2 years ago), and Himeji-jo (the only castle on the list of “Epic Japanese Castles” we haven’t seen yet). 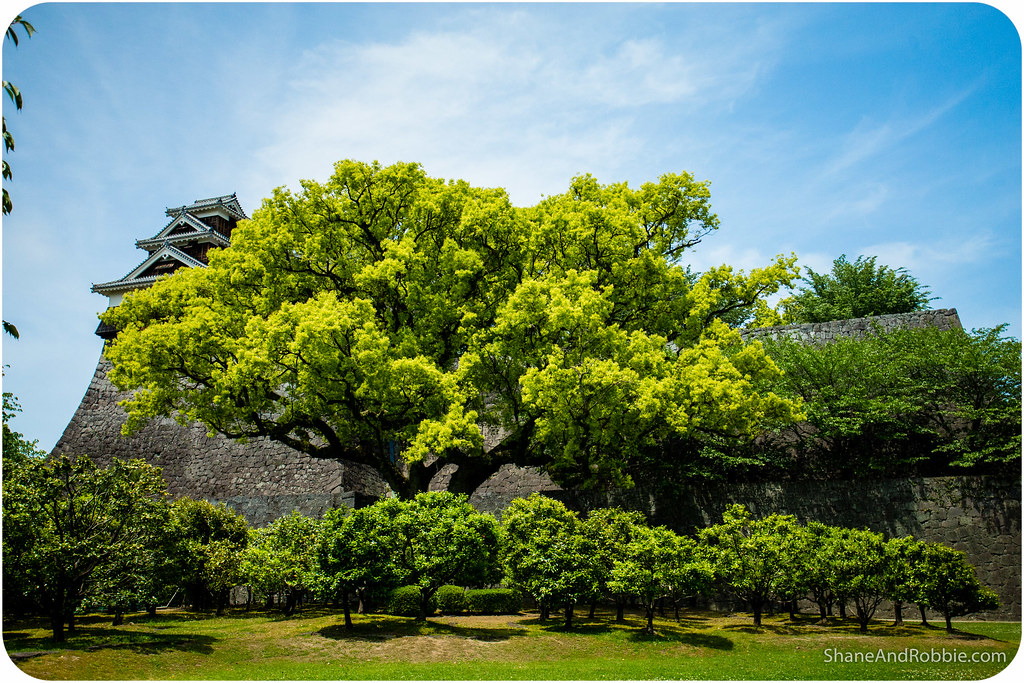 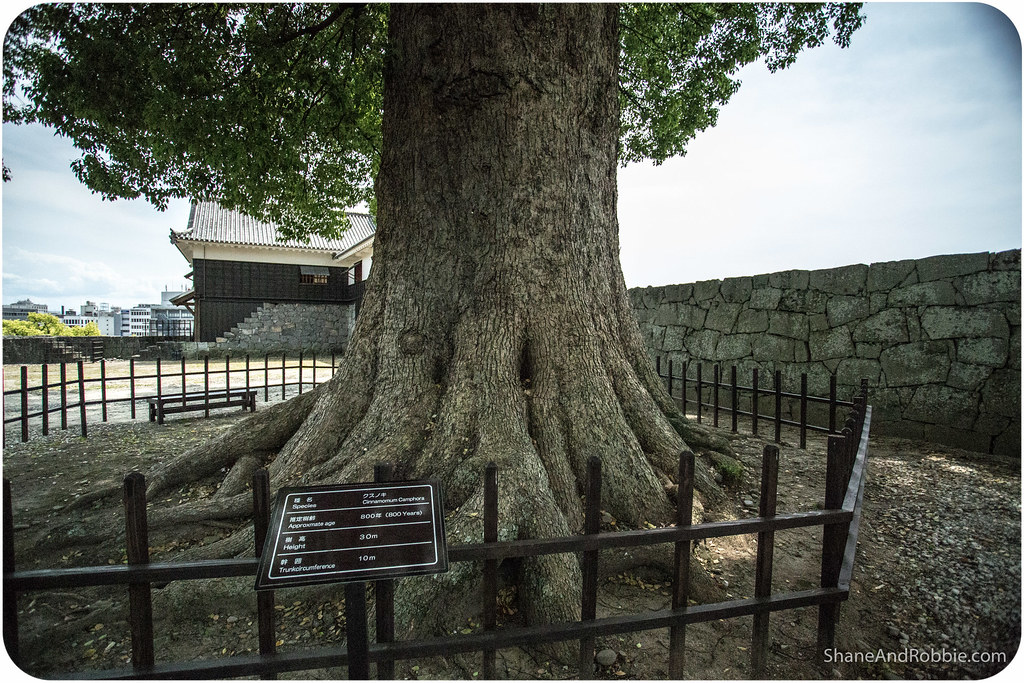 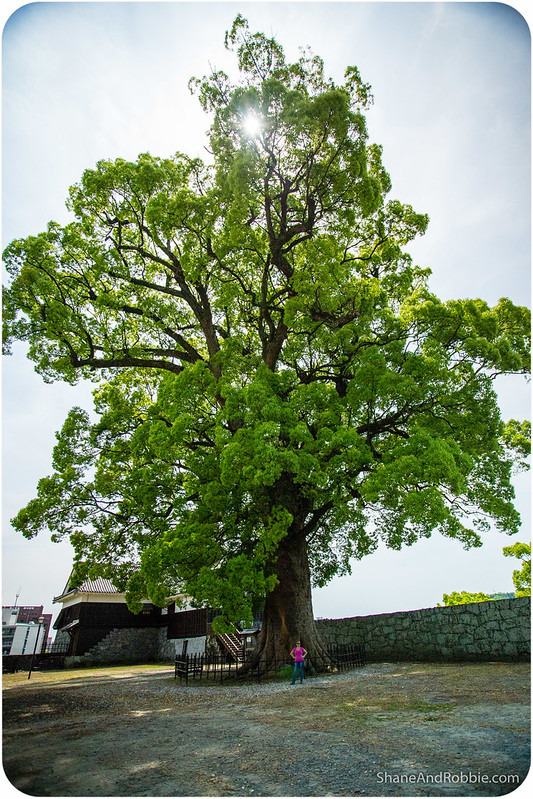 The construction of Kumamoto Castle began in 1601 and took 7 years; the castle was designed by Kato Kiyomasa, the daimyo (i.e. feudal lord ) who ruled the area. Kato was an experienced warrior, and he used his knowledge to build fortifications that were so effective and repelling attackers, they became a standard across Japan. The signature curved stone walls of Kumamoto-jo, known as musha-gaeshi, were pretty impressive towering above our heads.. 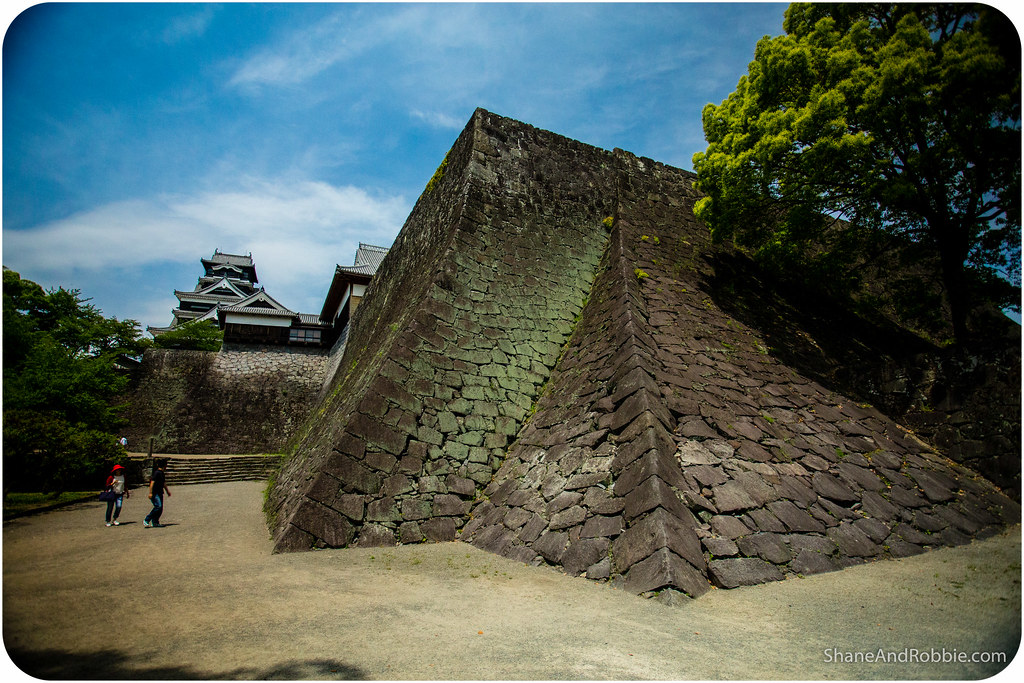 In the late 19th century the castle played a pivotal role during the Seinan Civil War, during which the samurai warrior Saigo Takamori led an uprising against the Kyushu government, and against the edicts of the Meiji Restoration. Kumamoto Castle was the main garrison point for government troops during the civil war. The castles fortifications, well provisioned larders (and stables), and many water wells allowed the government soldiers to survive a 2 month siege in 1877, ensuring their ultimate victory. We learnt today that it was during this time that the tradition of eating basashi* (i.e. raw horse meat) originated.
*Basashi is a popular delicacy here in Kumamoto, but not one we’re keen to sample. It’s not the “horse meat” part that puts us off, it’s the “raw” bit. Way too full-on for us. 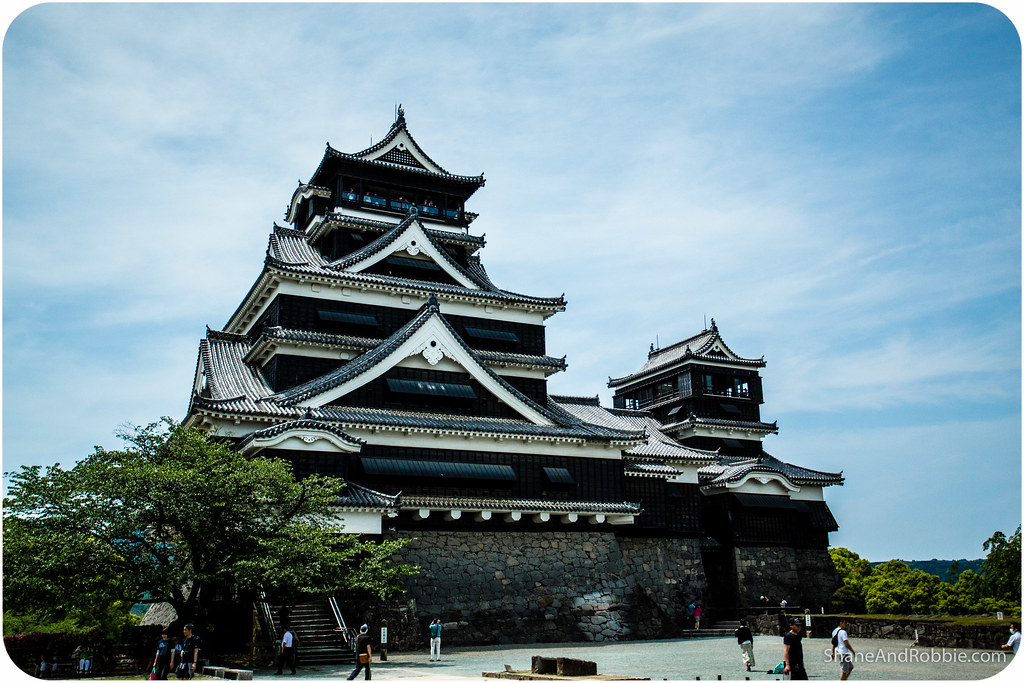 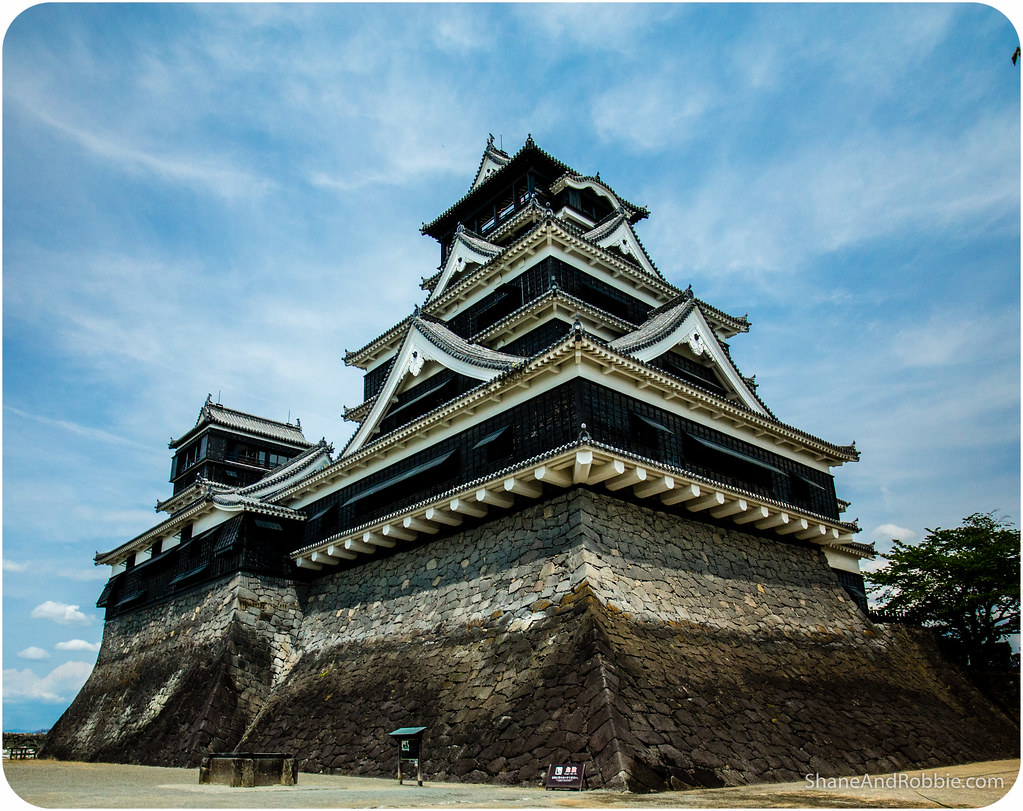 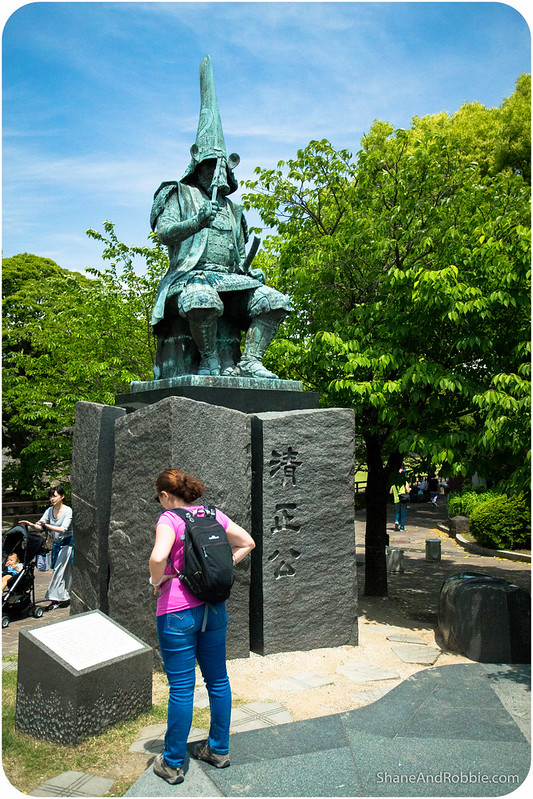 As well as the main castle and its grounds, we also got to see the reconstructed Honmaru Palace, once the main residence of the daimyo and his family. The palace was damaged during the Seinan Civil War, but some of the original rice paper screens survived. These have been lovingly restored and make for a splendid centre-piece to the palace. 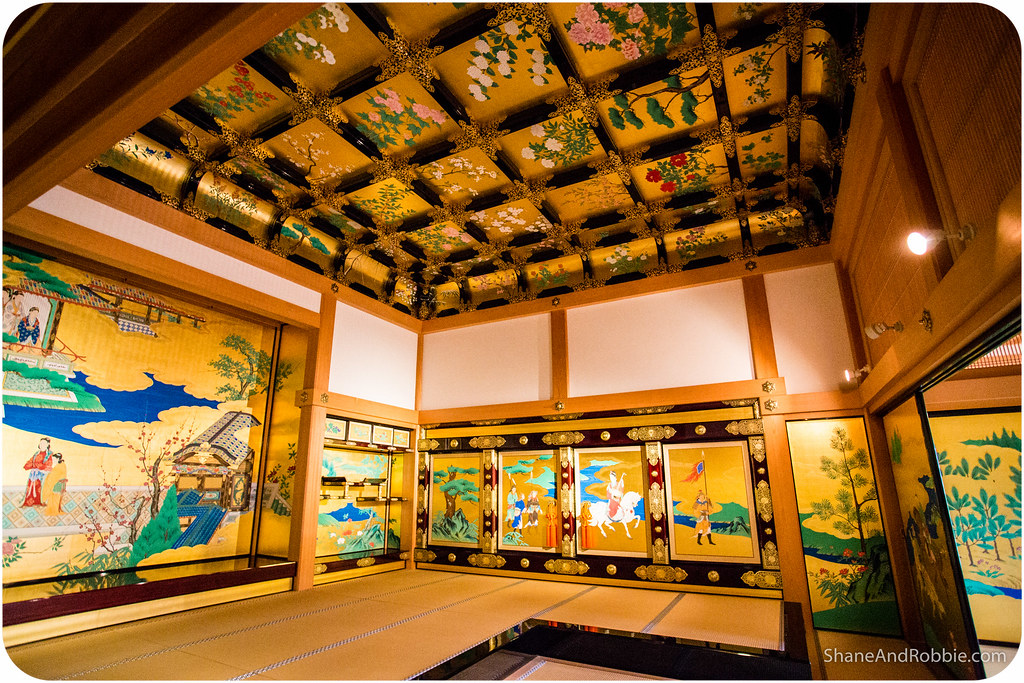 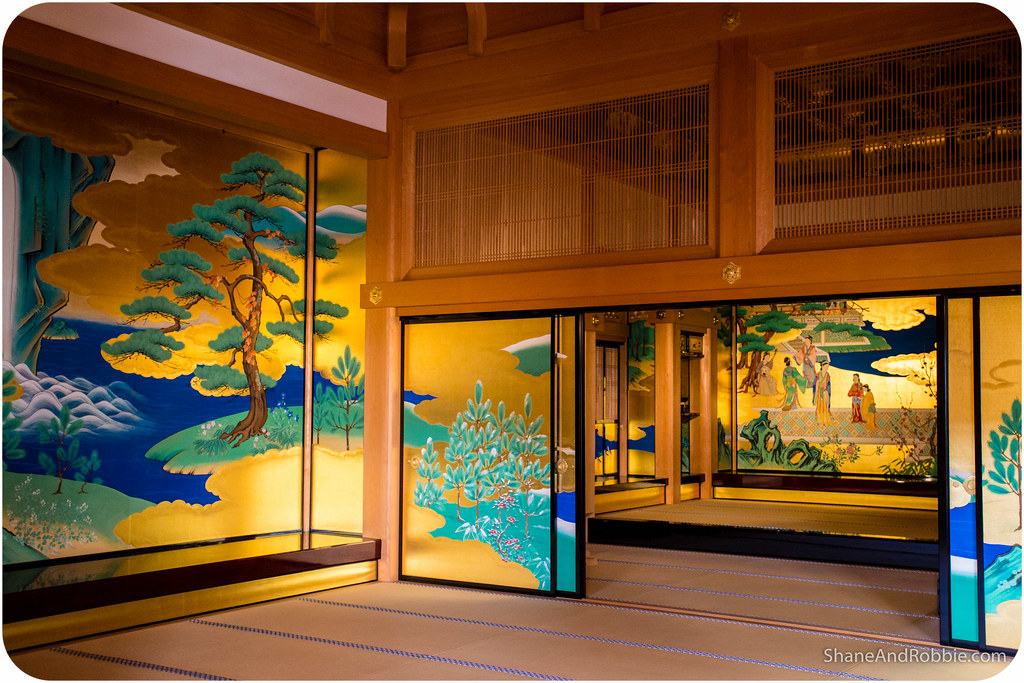 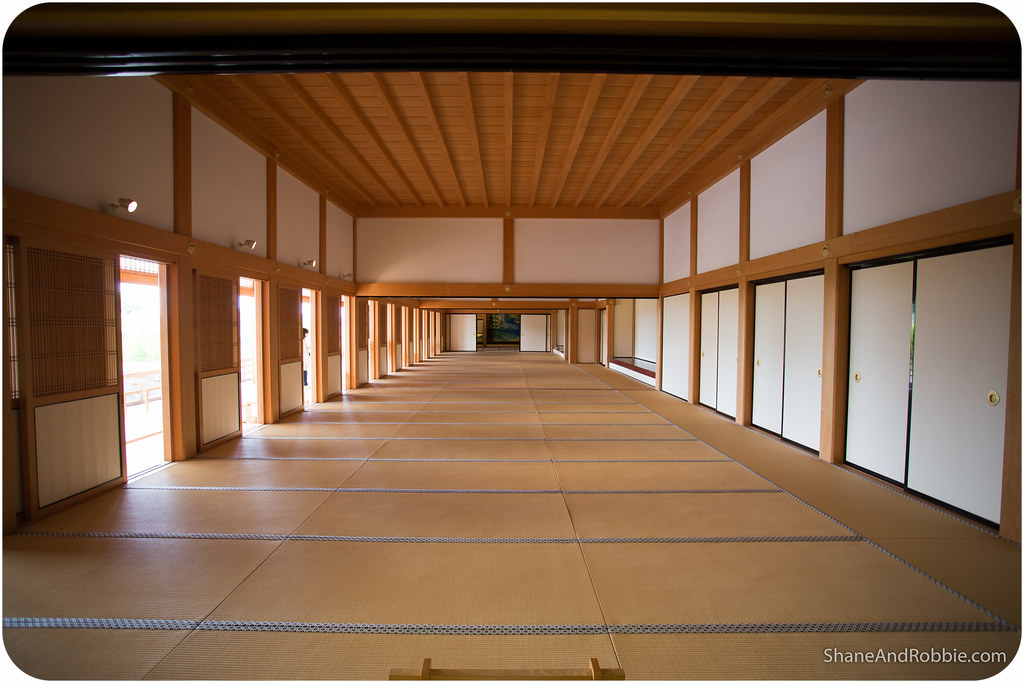 The funniest part of our tour around Kumamoto-jo was when we got to the “cheesy tourist” section of the castle grounds. They had guys dressed up as samurai, ladies dressed up in “olde worlde” Japanese garb, and a samurai cut-out that you could stand behind and have your photo taken. Shane did the right thing and pretended to be a samurai for the camera, so we fulfilled our “cheesy tourist photo” quota for the day. 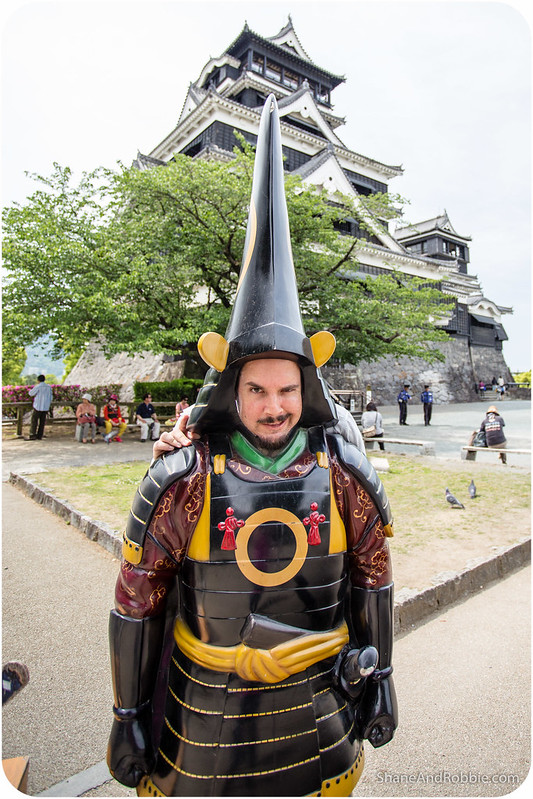 After spending a bit more time strolling through the castle gardens we were hot and thirsty enough that we had to stop for an iced coffee, after which the cool, air-conditioned comfort of our hotel room beckoned. And now we’re watching more whacky Japanese game shows and planning our adventure for tomorrow… 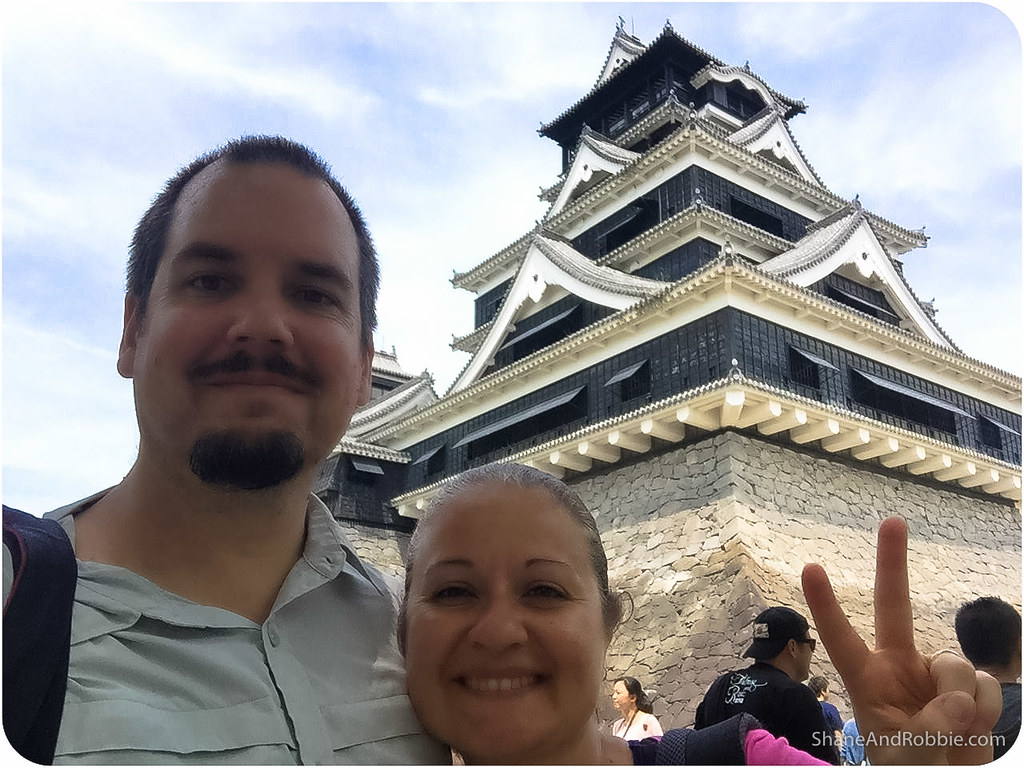 Post Script: One of the things that’s worth mentioning is that today was officially the beginning of Japanese Golden Week. This week includes a number of public holidays all clustered together (a bit like Christmas, Boxing Day and New Year’s back in Aus). The holidays include Showa Day* (today), Constitution Day (3rd May), Greenery Day (4th May), and Children’s Day (5th May). Most people are on leave this week and it is renown all over Japan as being an incredibly busy time, particularly on public transport and at major tourist sites. We’ve tried to plan out our travel and activities this coming week to minimise the amount of Golden Week shenanigans we encounter, but we’re also preparing ourselves psychologically for some crowds and chaos!
*Showa Day is sometimes known as Emperor’s Day as it honours the birthday of the former emperor of Japan, Hirohito (who was also known as the Showa Emperor and ruled from 1926 to 1989). The official pamphlets say that the purpose of today’s holiday is to “…encourage public reflection on the turbulent 63 years of Emperor Hirohito’s reign”. We saw a lot of families relaxing in parks, socialising with friends, and people trawling through shopping malls trying to stay cool (it was really hot here today). Just like most public holidays everywhere really!