TAKING A PEAK AT NAGASAKI’S MULTICULTURAL HISTORY
For centuries Nagasaki was Japan’s only open port, where people, goods, services, technology and information from other countries were allowed into the country (albeit in a very controlled manner). Due to its historical importance as a trading centre, Nagasaki has a multicultural history that is unique in Japan. A history we explored and took some time to learn a bit more about today. 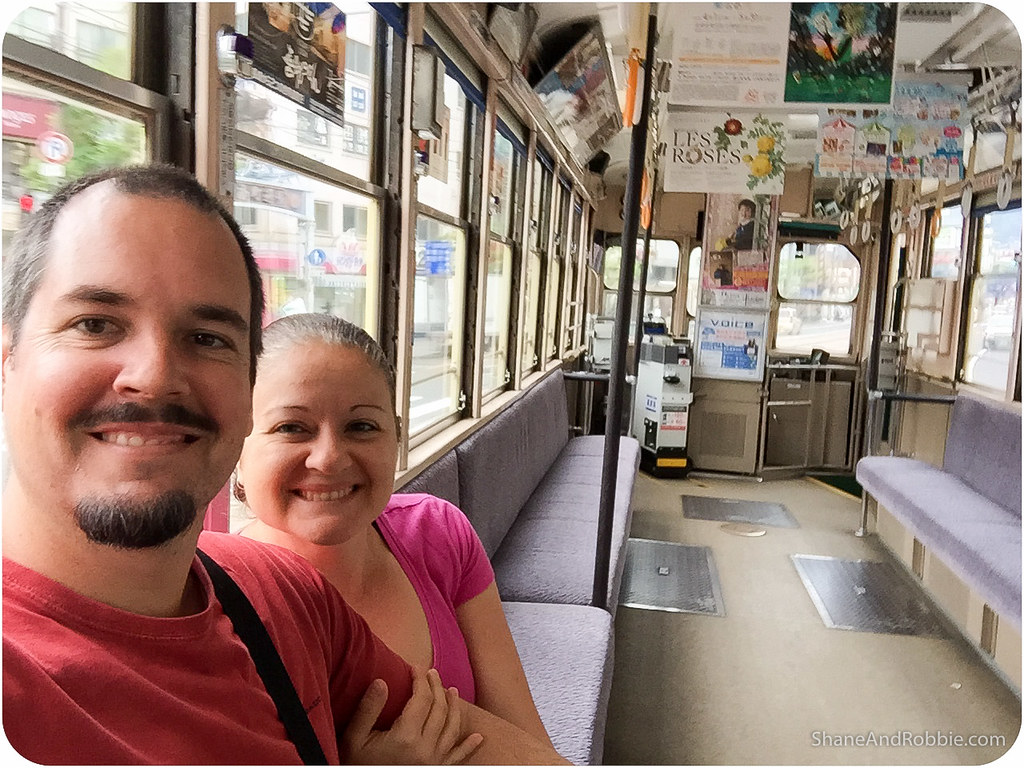 In the early 17th century Japan entered what is referred to as “The Period of Isolation”, or sakoku (i.e. locked country). From 1633 to 1853 it was illegal for foreigners to enter Japan, nor could any Japanese national leave the country, on penalty of death. The only place in Japan where some foreigners were allowed to remain was Nagasaki, though they were kept corralled in districts, away from the locals and with limited opportunity to mingle with Japanese citizens. Europeans were housed on a small island called Dejima (i.e. De Island) which sits in the middle of the Urakami River. Today Dejima is an open-air museum that includes restorations of the original warehouses and houses, and a miniature replica of the whole island, as it would have looked 400 years ago. 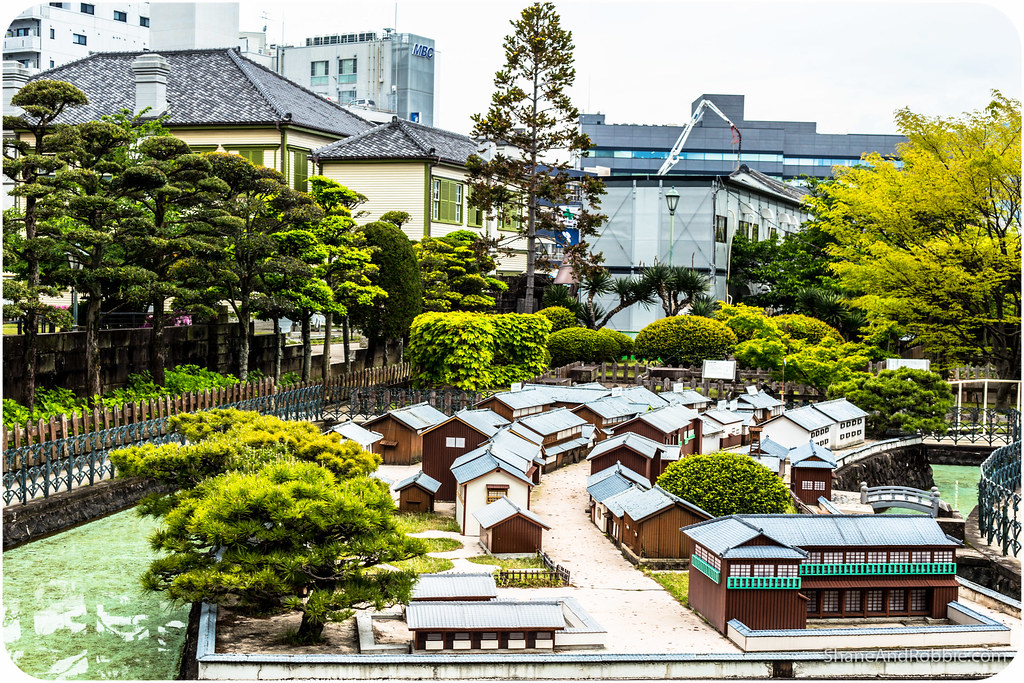 Nagasaki was originally a small fishing village with little historical significance until contact with Portuguese explorers came in 1543. Soon after Portuguese traders started sailing to Japan regularly and a small community of Europeans was established here in Nagasaki. These Portuguese traders were housed on Dejima, in Japanese-style homes that the Europeans quickly modified to make them more “homely”, by their standards (e.g. they brought in tall furniture and added glass windows, something the Japanese had never seen before). 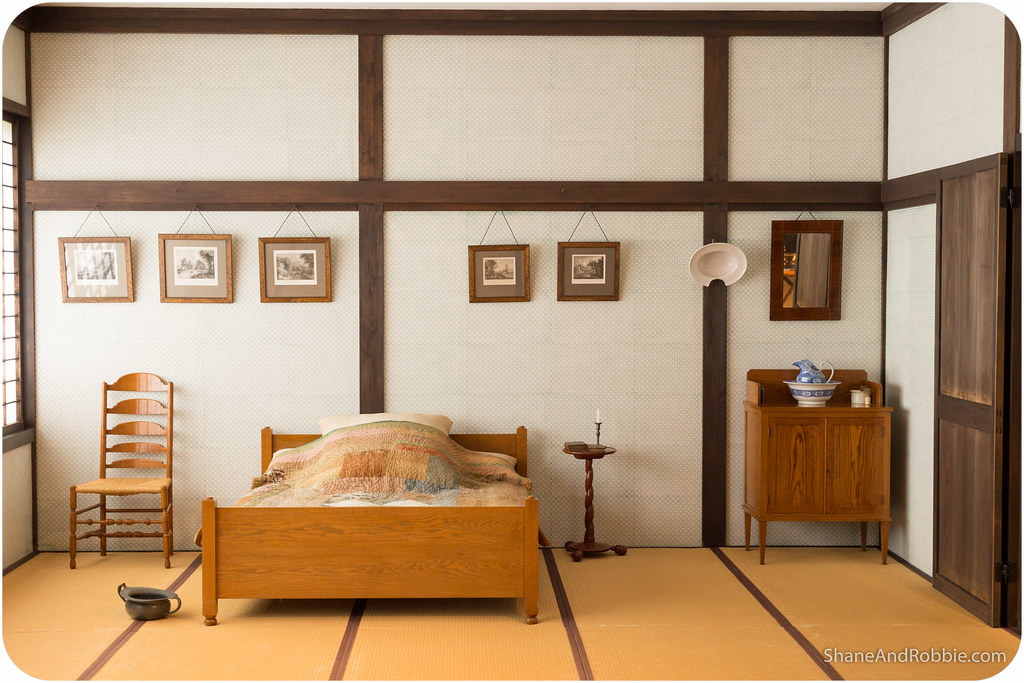 The little fishing village of Nagasaki quickly grew into a multicultural, prosperous port city and Portuguese products imported through Nagasaki (such as tobacco, bread, textiles and a Portuguese sponge-cake called castellas*) were assimilated into popular Japanese culture. We learnt today that even the quintessentially Japanese dish of tempura is actually based on a popular Portuguese recipe originally known as peixinho-da-horta, and takes its name from the Portuguese word tempero, meaning “seasoned”.
*The Japanese version of castellas are everywhere, and very yummy.

The Portuguese also brought with them Christianity, and Nagasaki soon became the centre of the Christian faith in Japan. Ōura Church, which we also saw today, is the oldest surviving Christian church in Japan. Relations between the dominant Shinto Buddhist religious orders and the “new” Christian religions were not always peaceful and tolerant, however, with Japanese Christians being persecuted and killed for many centuries. With the Meiji Restoration of the 19th century, however, freedom of religious practice was established and Christians were once again able to build churches and worship openly. 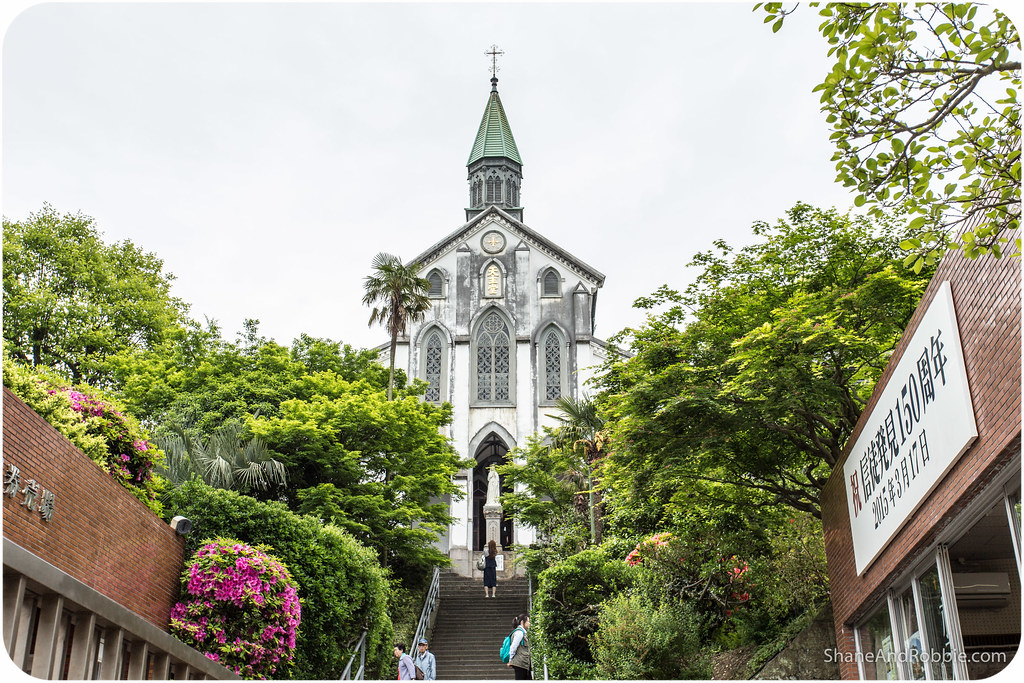 Due to the perceived threat of their religious influence, the Portuguese were expelled from Japan in 1636; filling the trading gap that opened up were the Dutch, who by that stage had a well established trading route between Europe and Asia. The Dutch East India Company and various other Dutch traders had warehouses on Dejima for many years. It was strange walking through Dejima and imagining what life must have been like for the resident traders, forced to live on that tiny island in almost complete isolation*.
*The residents of Dejima were allowed to interact with local officials and businessmen on matters of trade only and had to have their own doctors, tradesmen and essential services on the island. 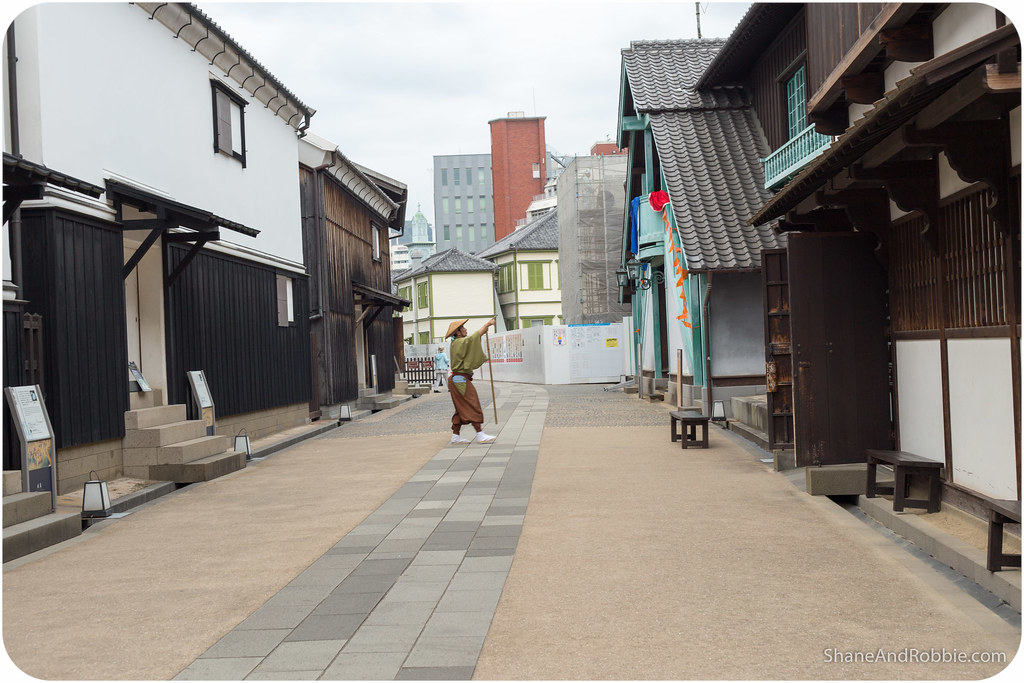 Alongside the Portuguese and, later, the Dutch, were the Chinese. Japan had cut off virtually all political and trading ties with China by the end of the 1500s, with the exception, again, being Nagasaki. There was a large population of Chinese expatriates living in Nagasaki during “The Period of Isolation”*, though even they were forced to remain within the confines of their designated district. The Nagasaki Chinatown district is, even today, a vibrant area willed with shops and Chinese restaurants.
*It is believed that as much as a third of the population of Nagasaki was Chinese during the 17th to 19th centuries. 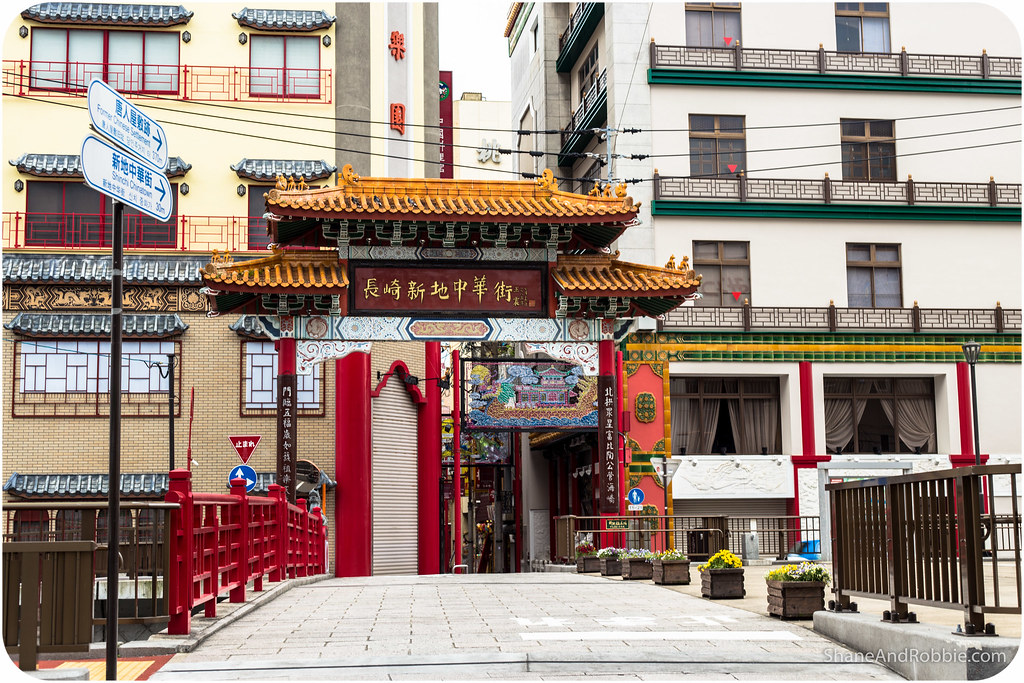 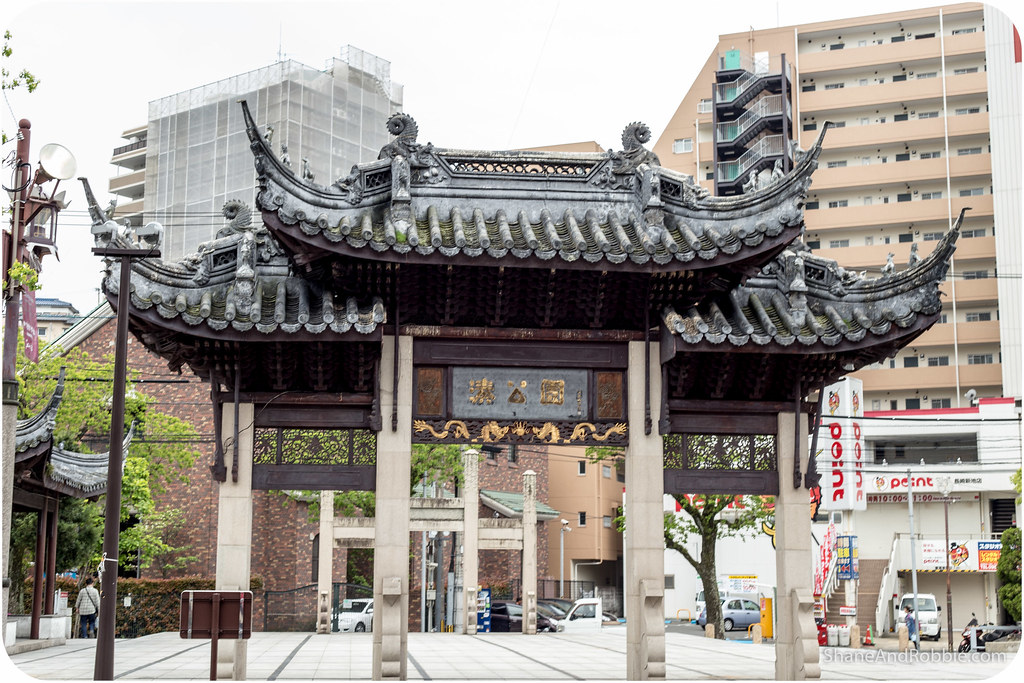 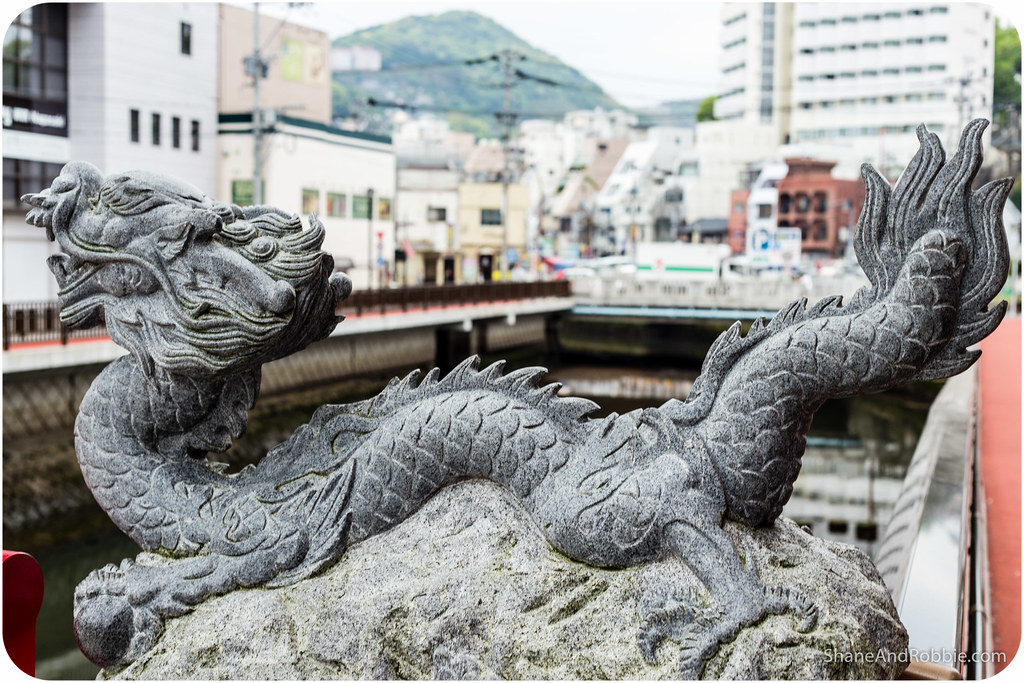 As well food, culture and trading goods, the Chinese residents of Nagasaki also brought their own religious beliefs with them. Today there are 2 significant temples in Nagasaki that were built during the centuries of sakoku. The oldest of these is Sofuku-ji, a Zen Buddhist temple built in 1629 and still in use today. 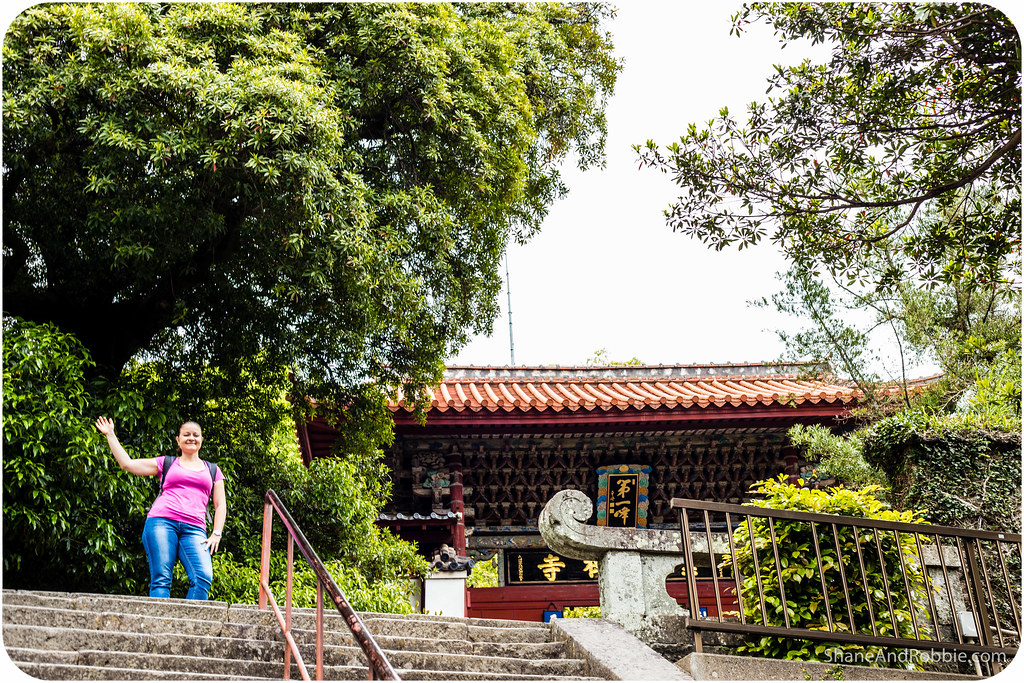 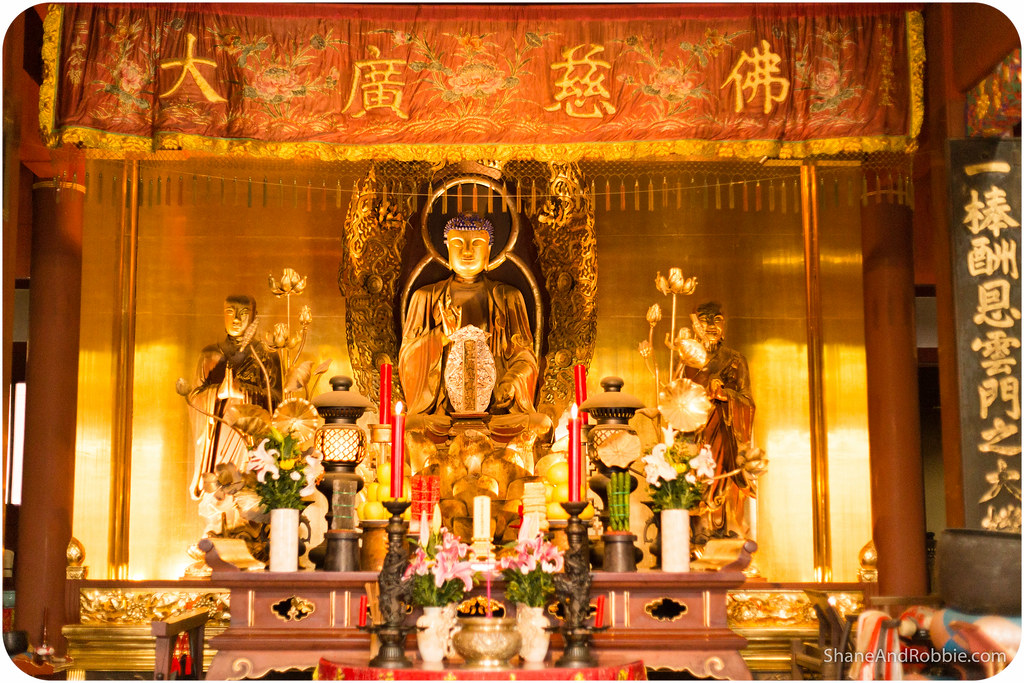 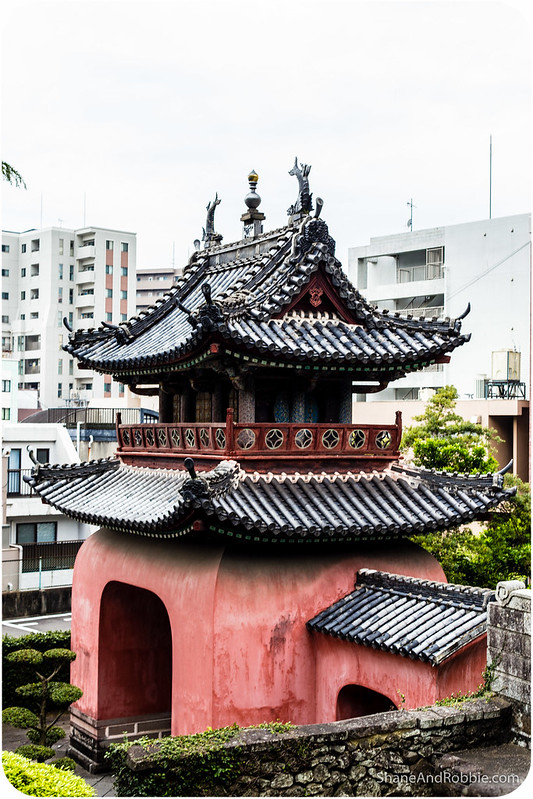 Koshi-byo is a Confucian temple that was also built by and for the Chinese community of Nagasaki. It is the world’s only Confucian shrine built outside China by Chinese hands. Even today the land on which it stands is Chinese territory and the land rights are controlled by the Chinese Embassy in Tokyo. 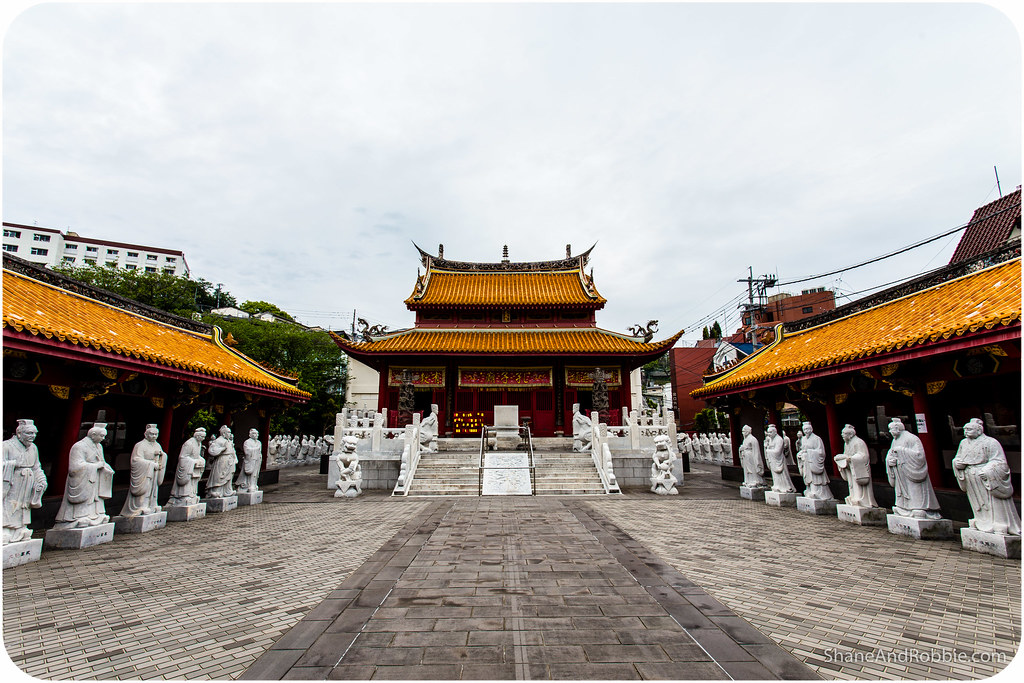 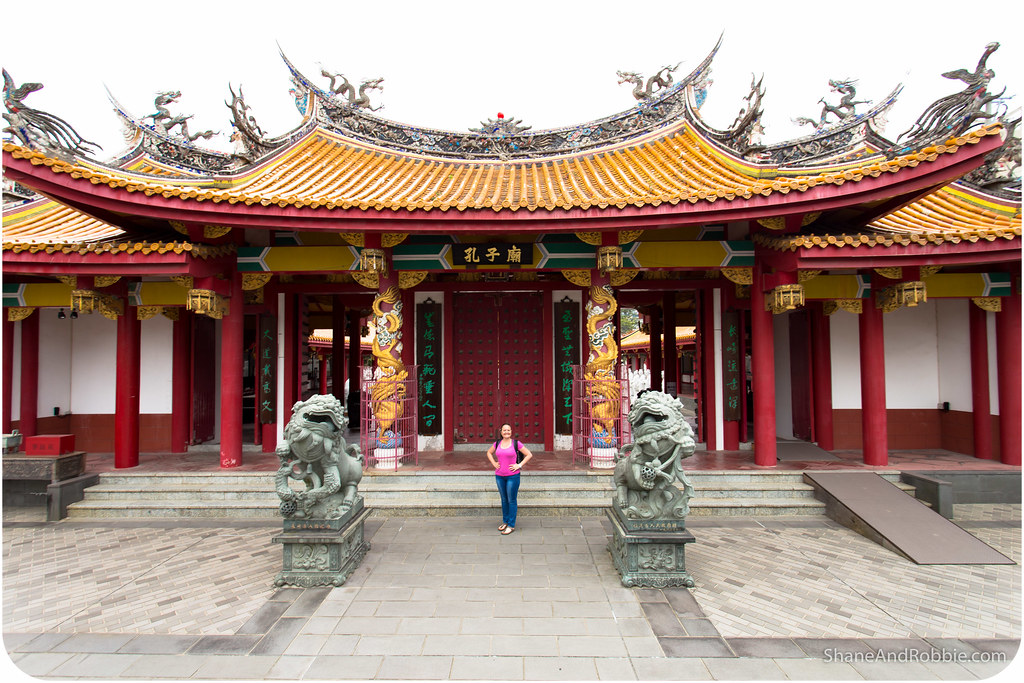 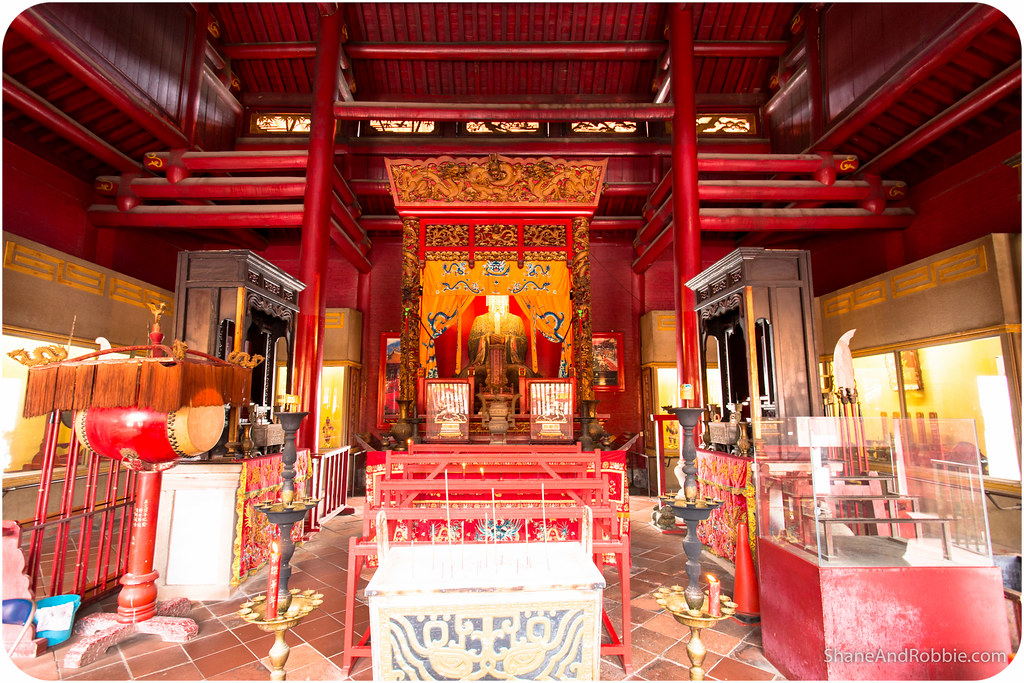 With the Meiji Restoration Japan opened its doors once again to foreign trade and diplomatic relations. Like most big Japanese cities Nagasaki was caught up in the drive for modernisation, and, in the latter half of the 19th century, became an important industrial centre. The Scottish merchant and investor Thomas Glover contributed significantly to this industrialisation and modernisation. He worked with local officials to get coal mines opened up, factories built and shipyards established. Glover Garden, which we also visited today, is another open-air museum dedicated to this phase of Nagasaki’s history. The gardens are very European in design and includes Glover’s former residence, as well as few other relocated Western-style homes from the era. It’s a great garden to stroll through, though the juxtaposition of 19th century Europe in modern Japan was a little odd! 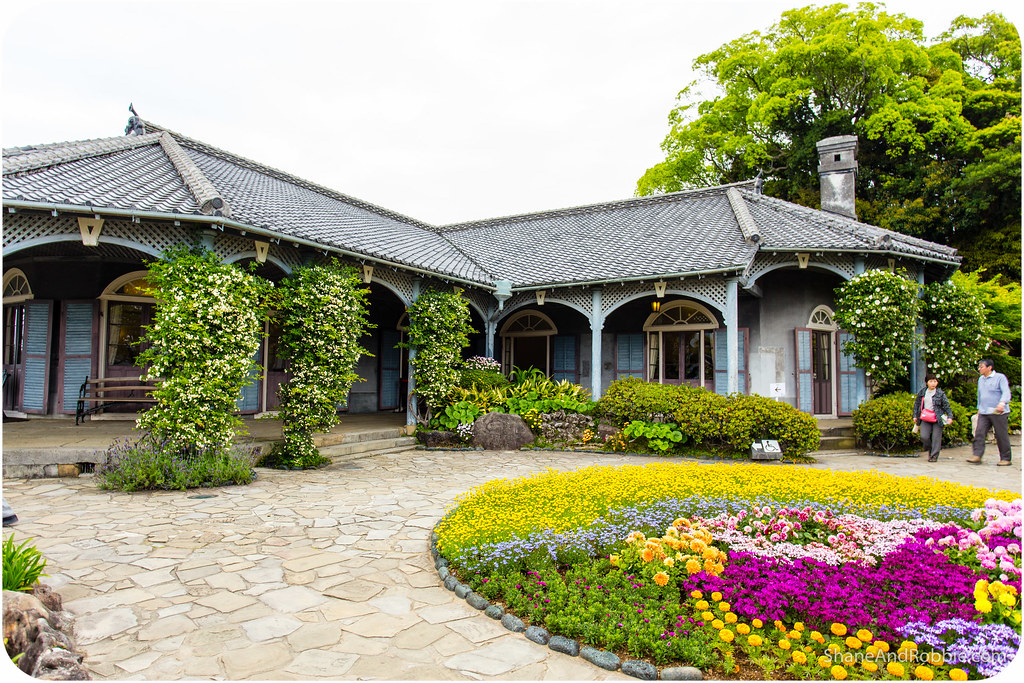 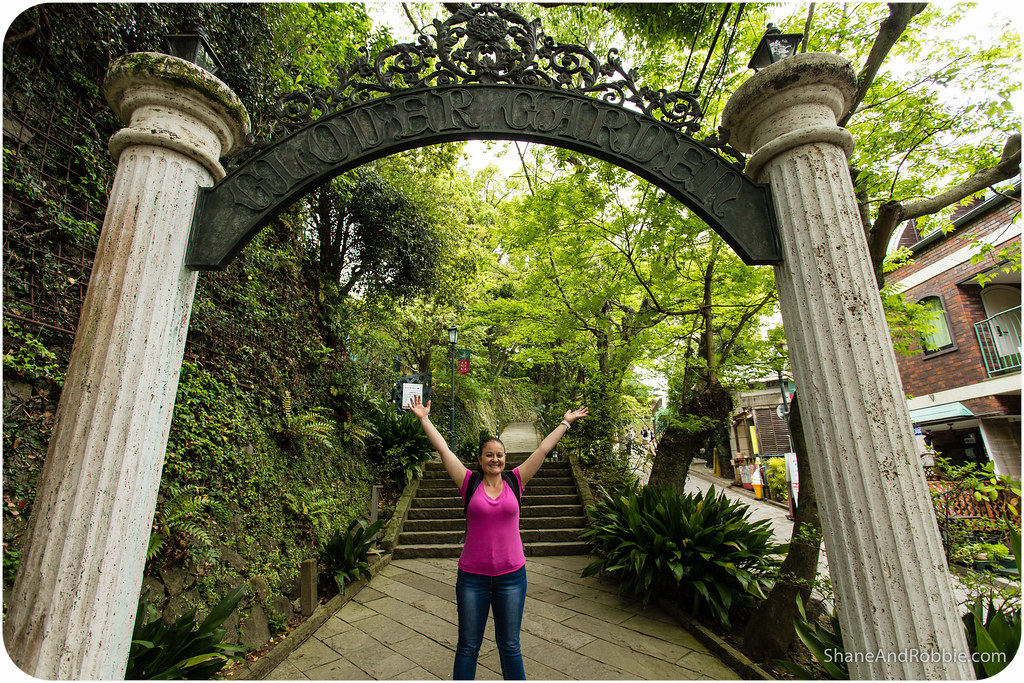 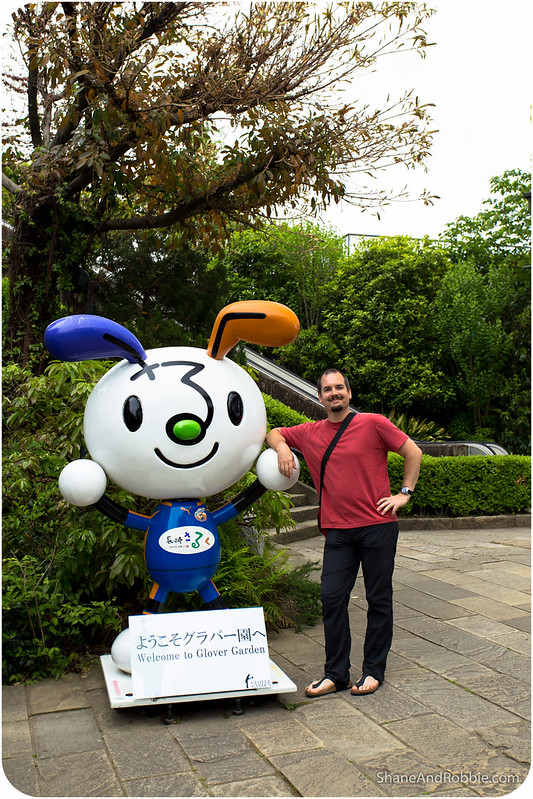 Some of islands in Nagasaki Harbour were developed as coal mines during this era, due to the subterranean and submarine coal seams discovered in the area. One of these was Hashijima (i.e. Hashi Island), nicknamed Gunkanjima (i.e. Gunkan Island, or Battleship island) for its distinctive ship-like shape.

Established in 1887, this 16-acre island once housed 5,259 people, was owned by Mitsubishi Industries, and produced tons of coal for use in heavy industry. As the demand for coal decreased and the seams ran out, however, the mine became less profitable and was eventually closed in 1974. Today the whole island is a ghost town, with concrete buildings that are collapsing and a reinforced concrete sea-wall that is starting to crumble. 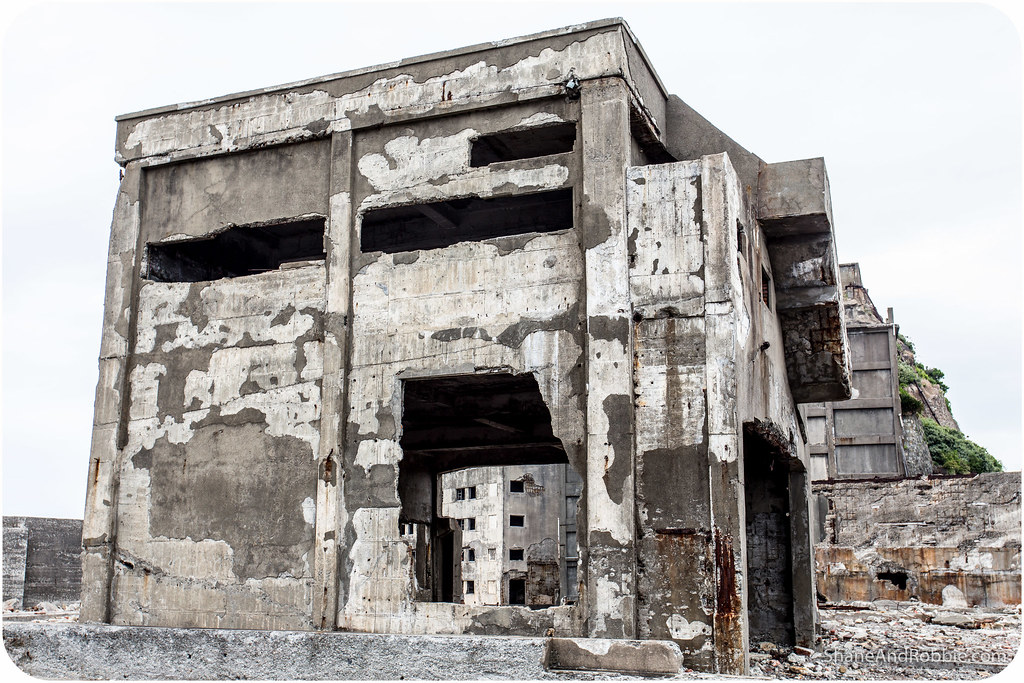 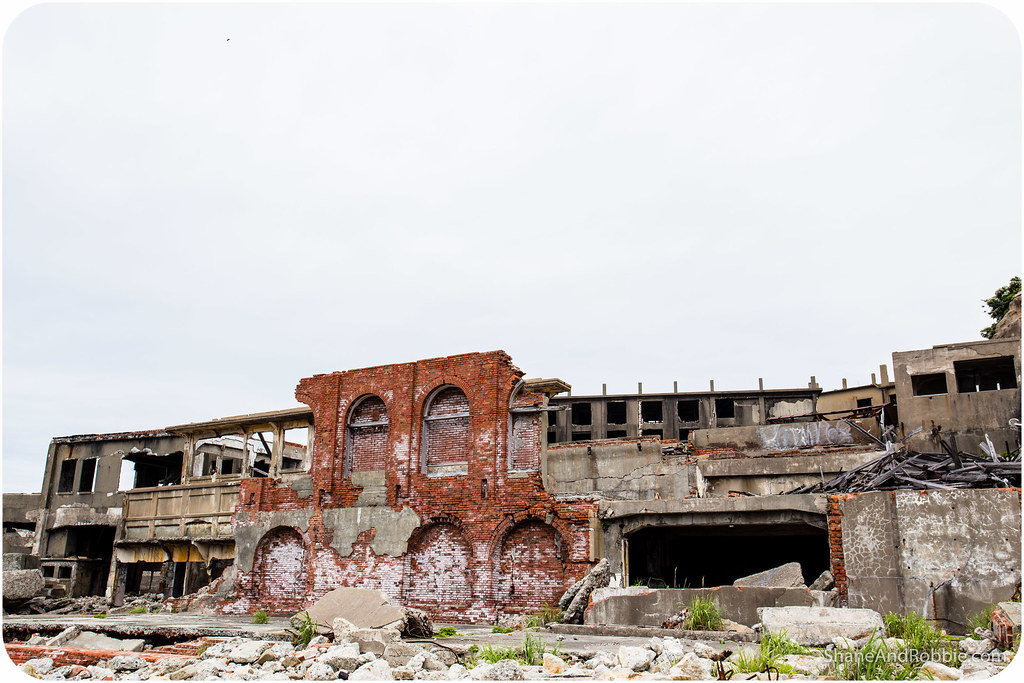 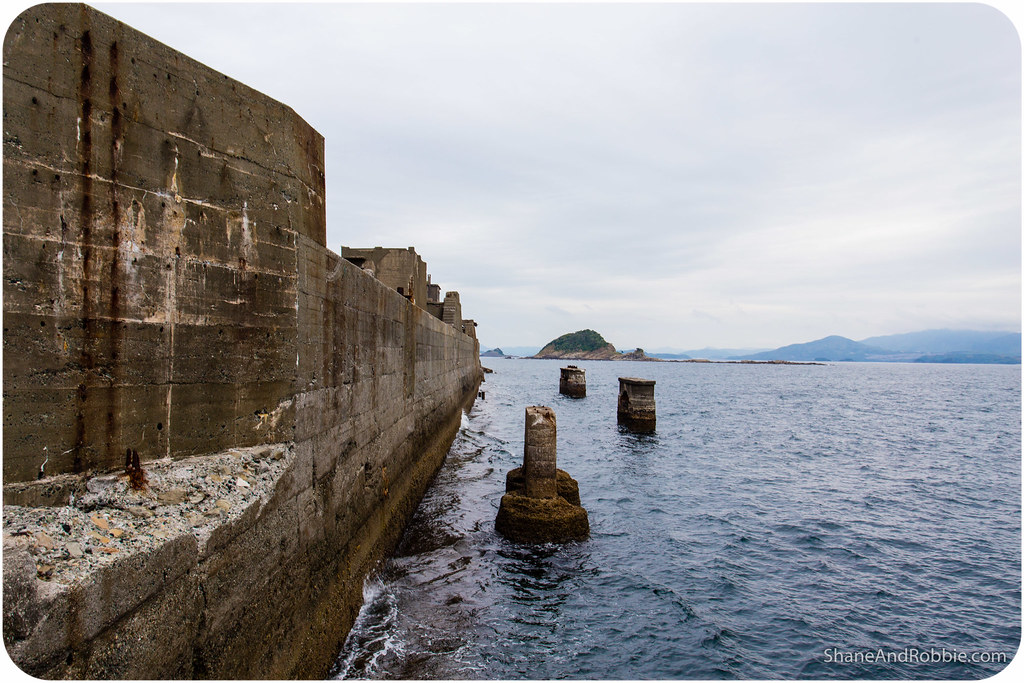 Gunkanjima has gained some fame due to its use in a couple of movies, including the James Bond “Skyfall” movie. It was the island’s noterietay that had us hopping on a boat to visit it today. The island itself was interesting, though the whole thing is a little tragic. The information we were given about the conditions people lived and worked under were horrendous, and seeing how barren the island was at its peak was depressing. Trees and grasses have regained a footing on the island now, bringing some life back to the concrete monstrosity it once was. 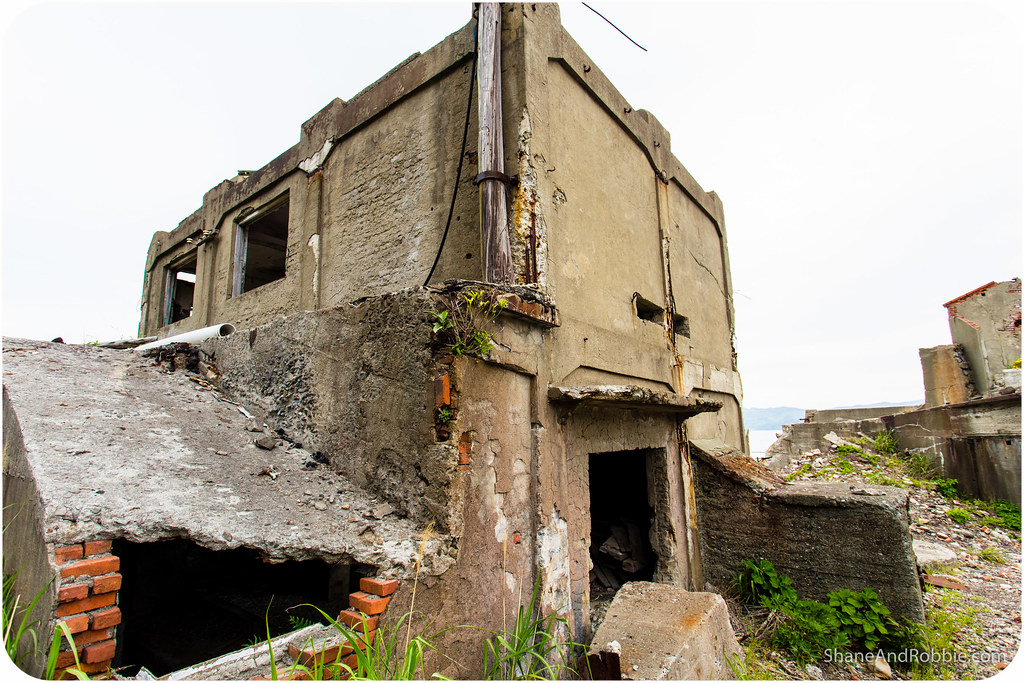 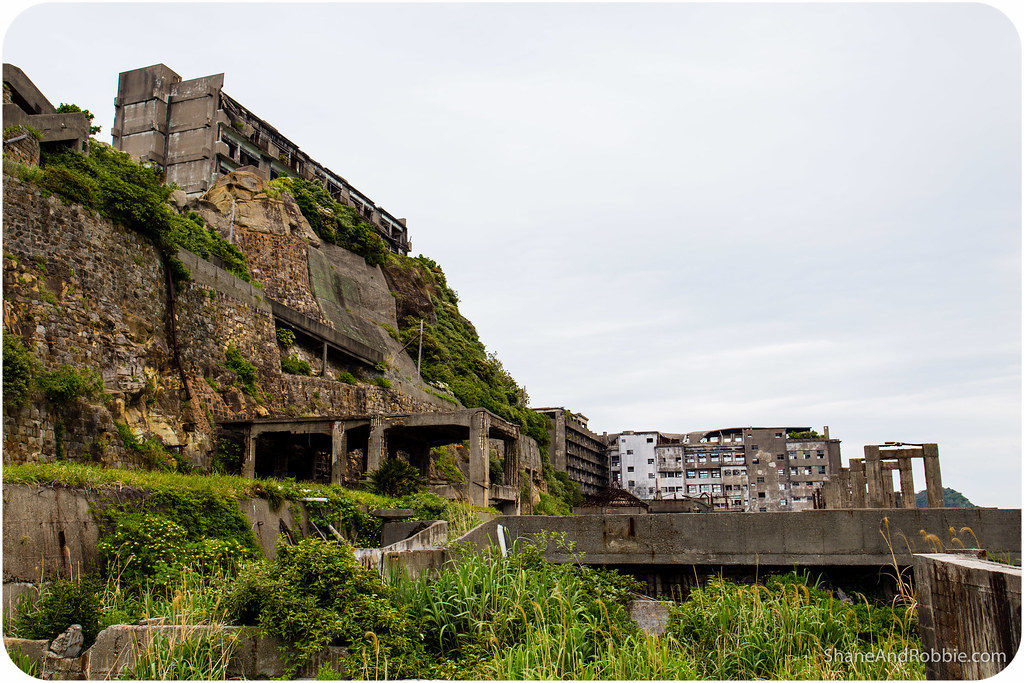 The visit to Gunkanjima left us feeling a little saddened at how ugly the impact of humanity on nature can be. The worst part of the whole visit, however, was the 1.5m swell. For those of you with good, sturdy sea legs this may not seem like much, but it was more than we had bargained for. Shane especially does not get on with the ocean (i.e. the ocean hates him and he hates it in equal measure), and bobbing around out there had him turning all sorts of pretty green colours. We were both pretty happy to get back on dry land at the end of the trip! 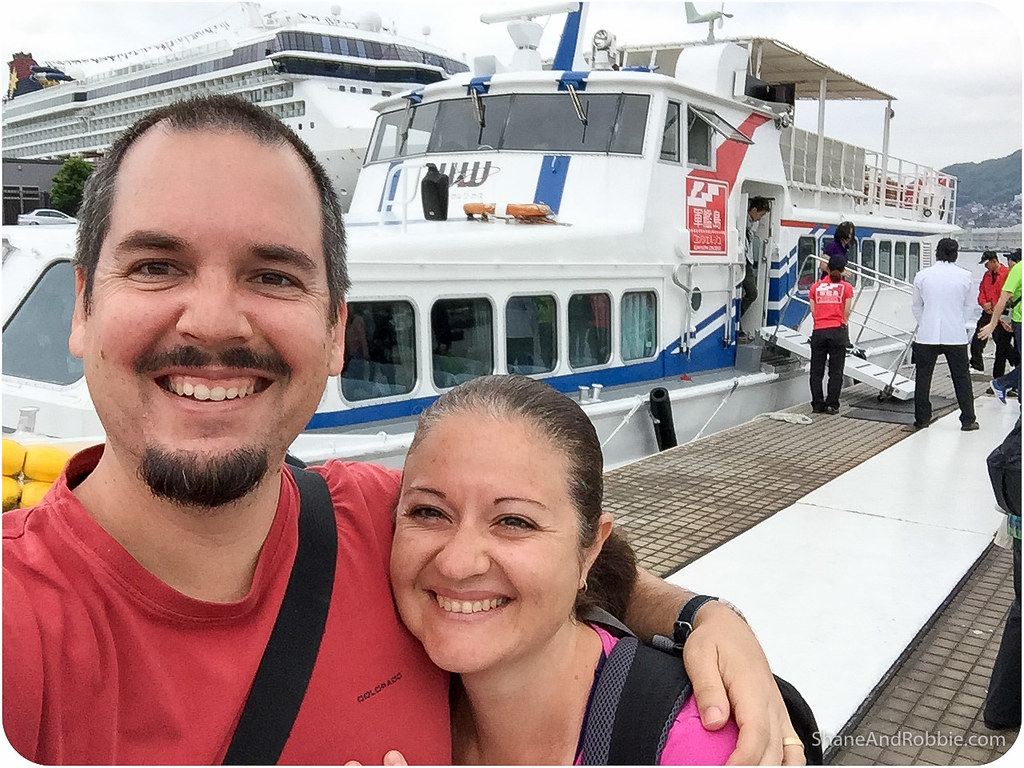 And as if our day wasn’t packed with enough excitement, when we went out for dinner tonight we stumbled across the Nagasaki Tall Ships Festival 2015. This annual event, we later discovered, celebrates all things maritime and includes tall mast ships from all over the world. There were about a dozen all docked around Nagasaki Harbour tonight, all lit up and looking awesome. It was a great spectacle and kept us well entertained after dinner. A great end to a great day in Nagasaki! 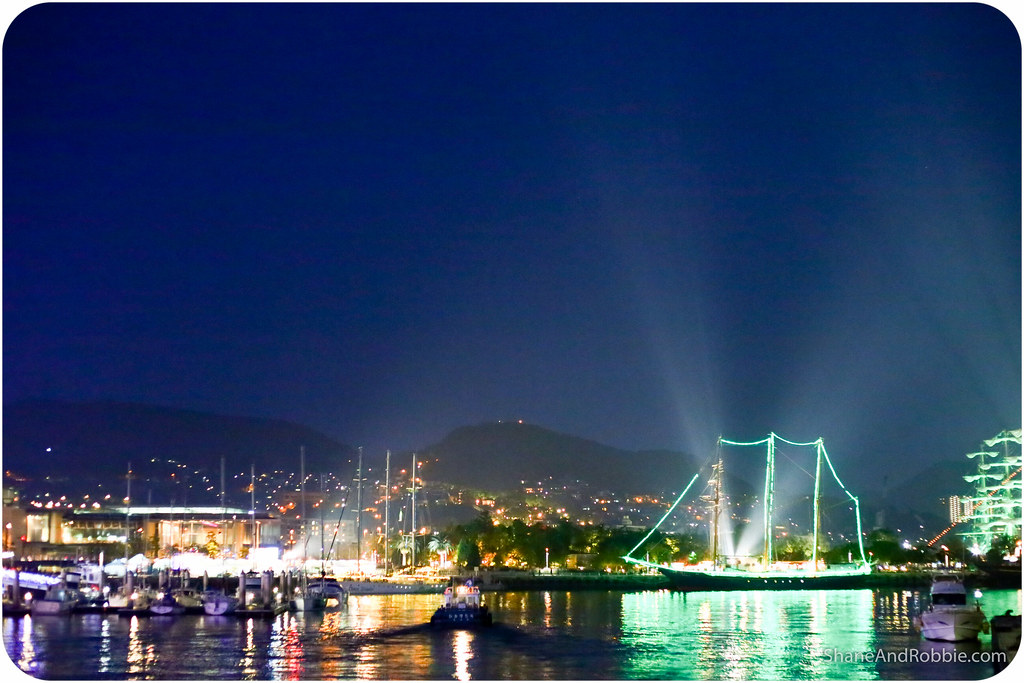 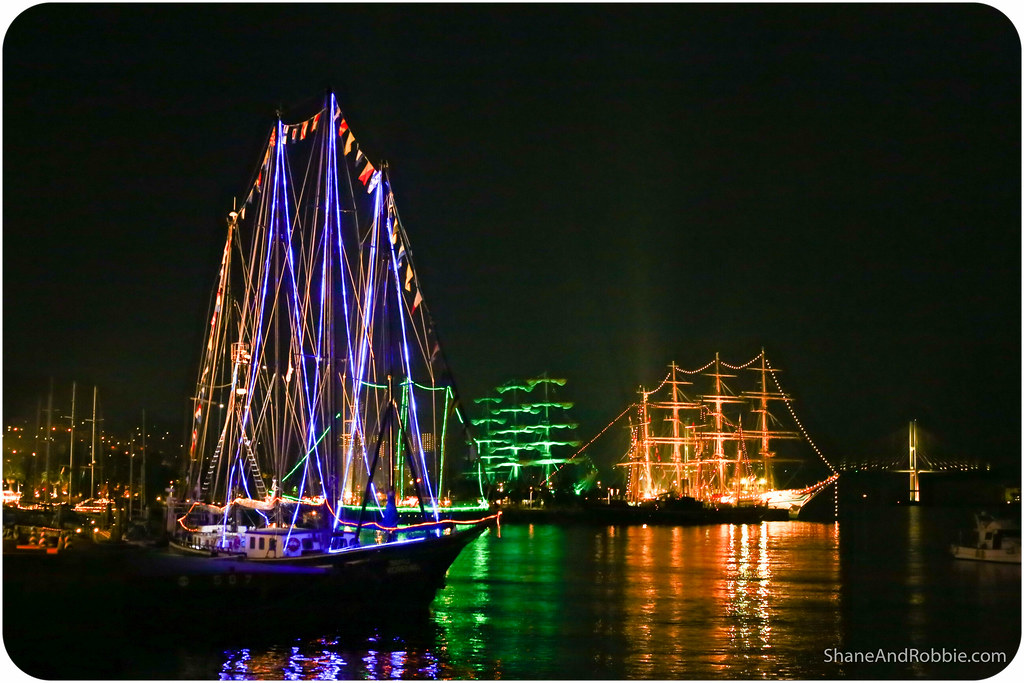 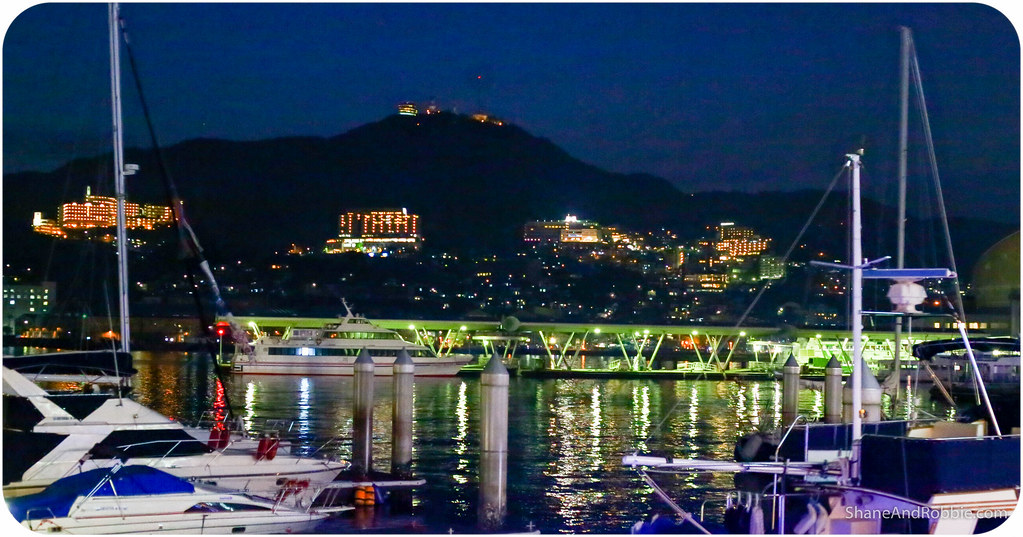