FESTIVAL FUN & A LITTLE BIT OF TONGUE
This week is Golden Week in Japan; this week of national holidays is the busiest holiday season in Japan. It’s also the week when many cities hold festivals to celebrate this festive season. We’ve turned into festival junkies after our experiences at the Tokushima Hana Haru Festival a few weeks ago, so when we heard that Fukuoka holds one of Japan’s biggest and best street festivals on the 3rd May every year, we just HAD TO go! 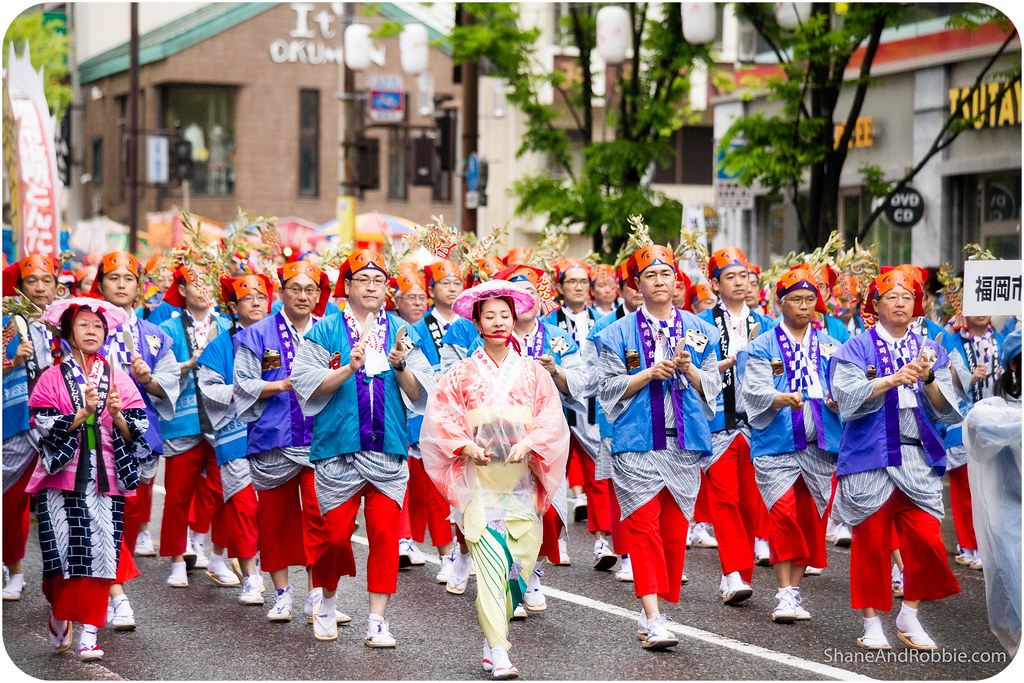 Fukuoka is about 280km north of Kagoshima, but with the wonders of the shinkansen and a J-Rail Pass*, we got up there in just over an hour. J-Rail Passes are awesome – we get them every time we come to Japan as they give you virtually* unlimited access to the rail network across Japan. Given how expensive travel on Japanese trains can be, they quickly pay for themselves. Today’s trip to and from Fukuoka, for example, would have cost us about $400AUD total, without a rail pass.
*There are just a couple of the super-fancy shinkansens you can’t use, every other train is your to ride for “free” – even seat reservations are free with a J-Rail Pass, which is great during busy travel periods like Golden Week as you’re guaranteed a seat of your own.

We got to Fukuoka around 11:00am, before the main street parade kicked off, but in time to see the city getting set up for the party. There were people dressed in costumes walking around the streets, and we stumbled across an impromptu street performance as a local girls’ high school practiced their routine for the parade. The atmosphere on the streets was great – everyone was definitely in holiday mode today! 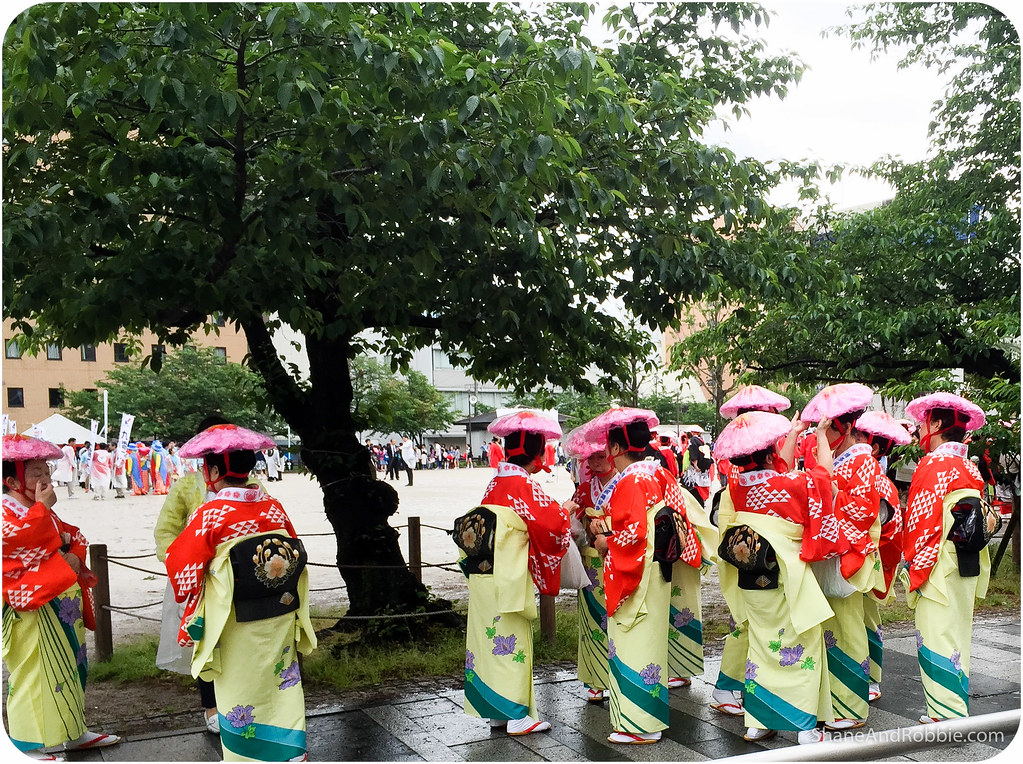 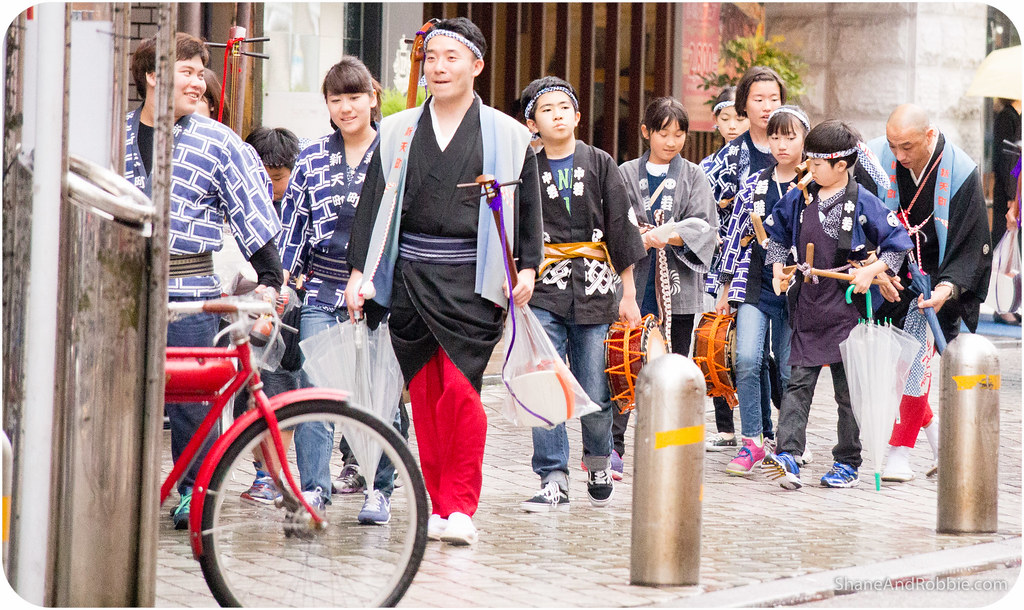 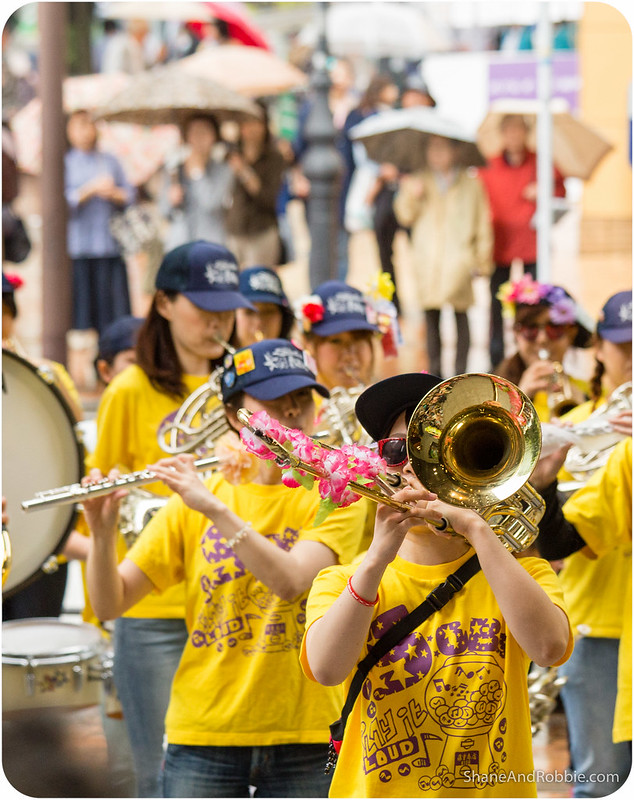 The Hakata Dontaku* Festival is held in Fukuoka every year on Constitution Day (i.e. 3rd May) and it’s designed to be a celebration of thanks. The festival has been running for over 800 years and used to involve local merchants paying their respects to the ruling daimyo (i.e. feudal lord) and priests from local temples blessing people, and carrying shrines and images of Shinto spirits of good fortune through the streets.
*“Hakata” is the name of this district and “Dontaku” means “holiday*” in the local dialect. We’ve also heard the “Dontaku” is thought to have derived from the Dutch word Zondag, meaning “Sunday,” which was broadened to mean “holiday,” and corrupted into Dontaku. Whatever the origin, the meaning is the same! 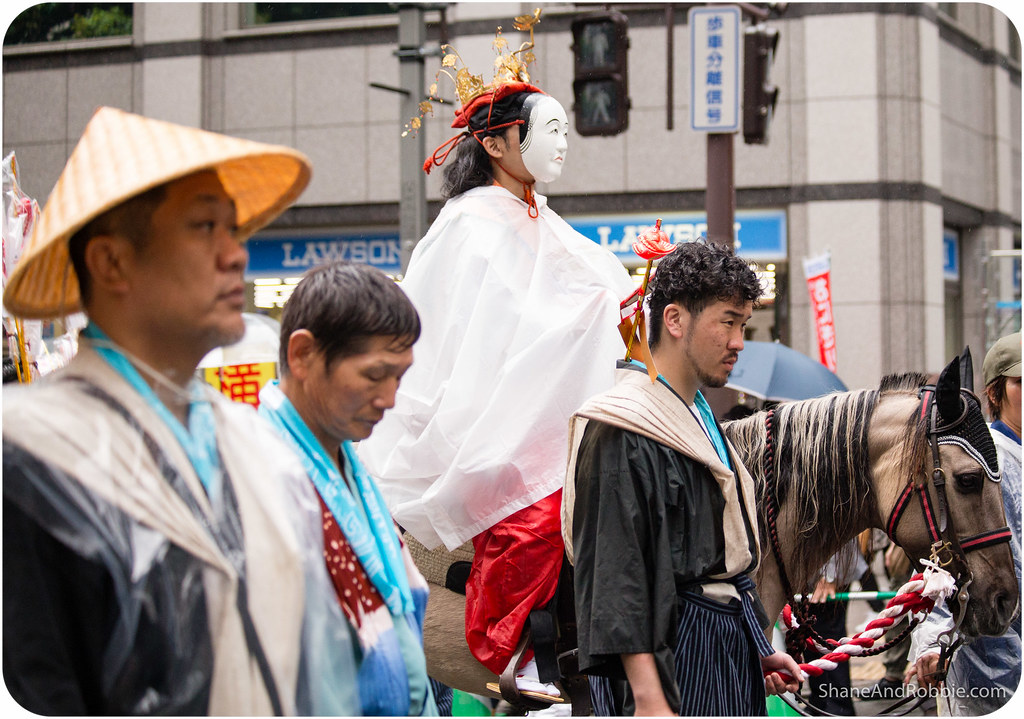 The festival continues to involve a modern equivalent to this, with the highlight being a 3-hour parade where priests hand out blessings in the form of bamboo cuttings decorated with coloured paper. There are also legendary gods riding past on horseback; floats and performances from local schools,the police, fire fighters, army and businesses; and groups of musicians playing samisens*, flutes, and drums.
*A traditional Japanese 3-stringed instrument similar to a banjo. 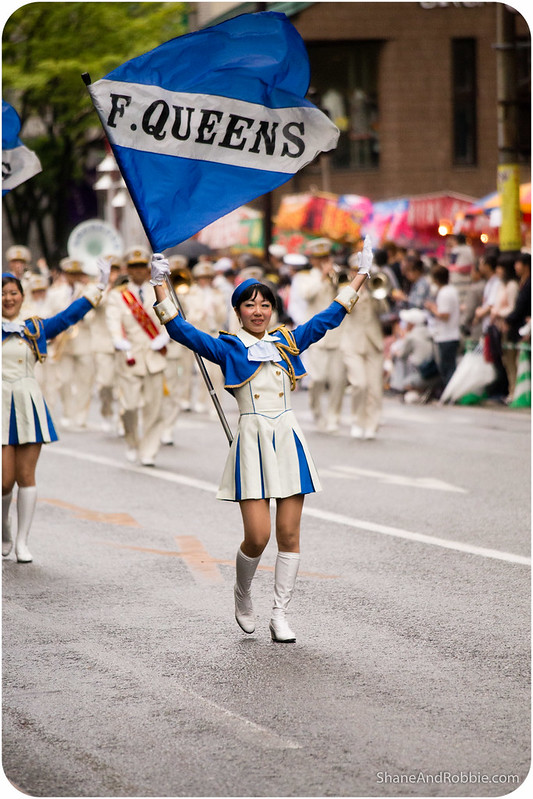 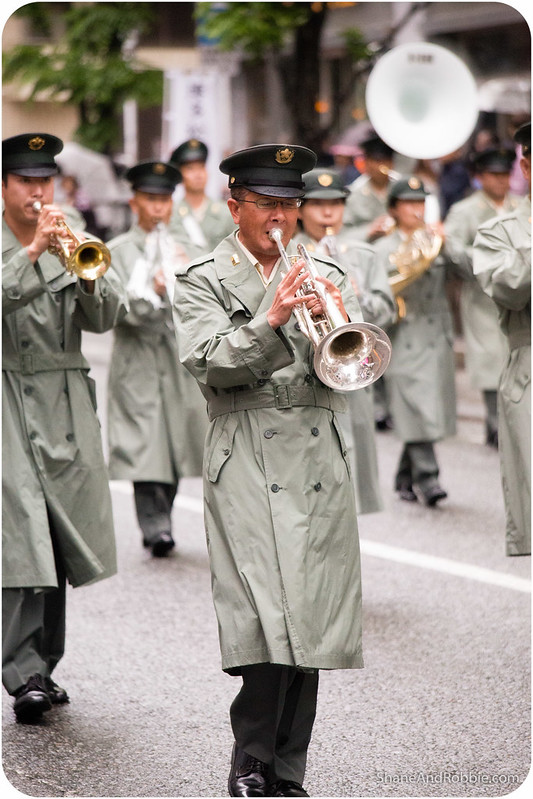 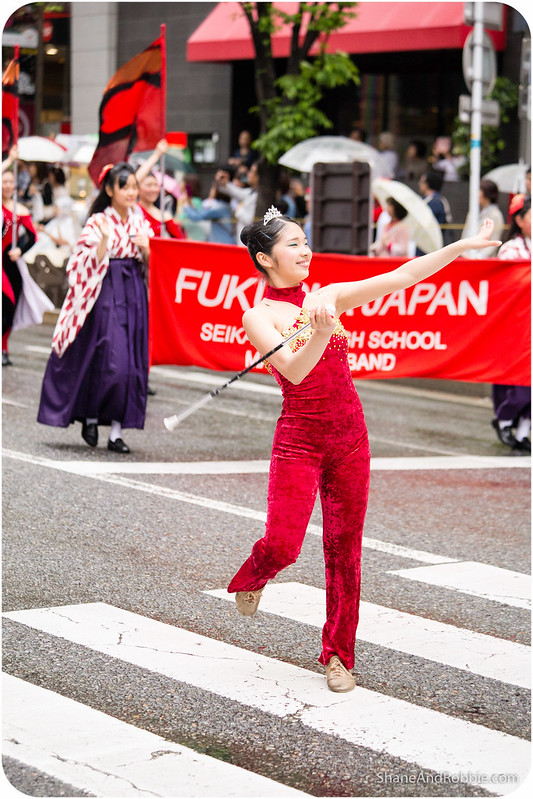 We got ourselves front row spots from which to watch the colourful parade. It was great fun; we even got handed a few bamboo “blessings” to wave around. 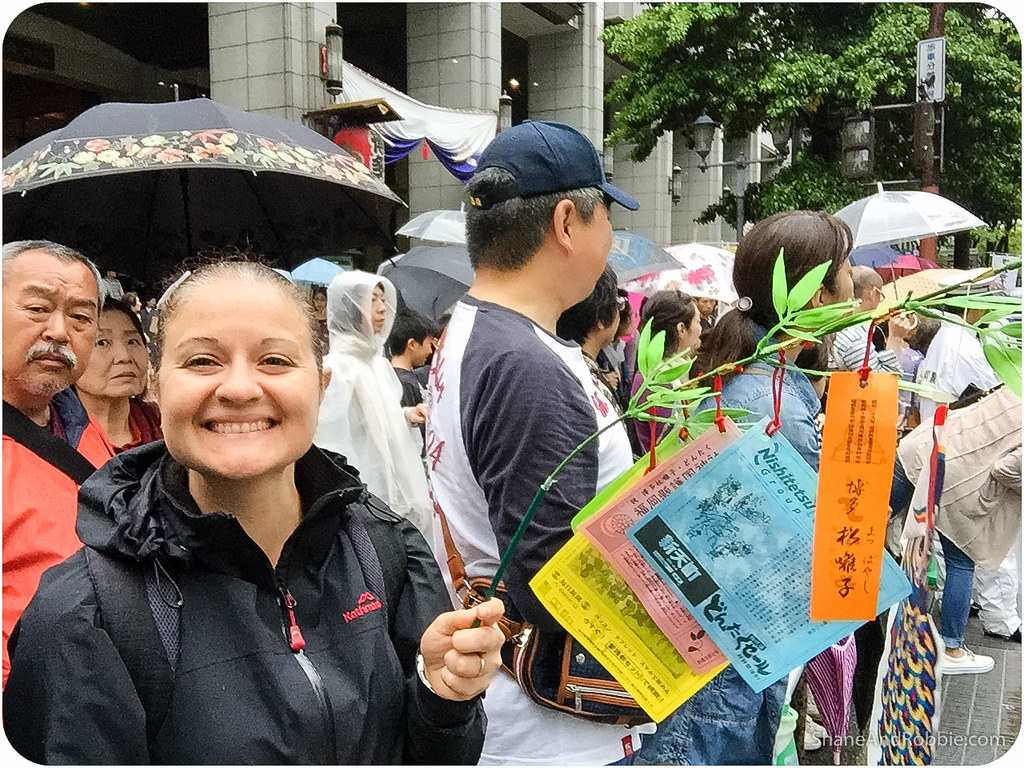 The festival is said to include 300,000 participants with over 600 groups involved in the parade. There were all kinds of costumes and types of performances – from very traditional Japanese ones, to big brass bands with majorettes and pom pom girls, and religious ones featuring demons and gods. 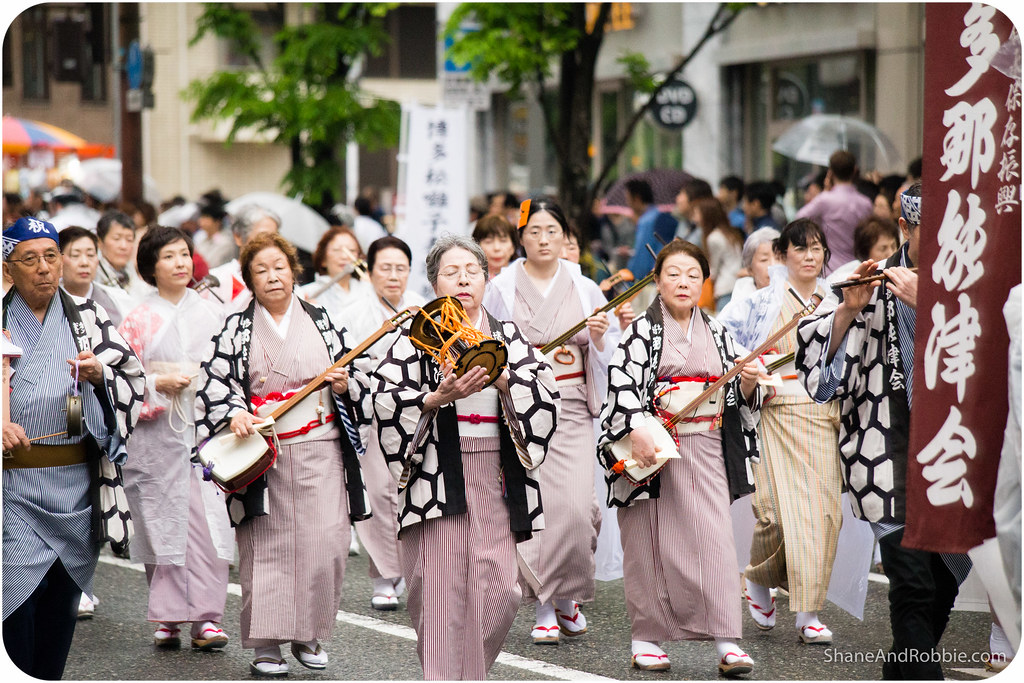 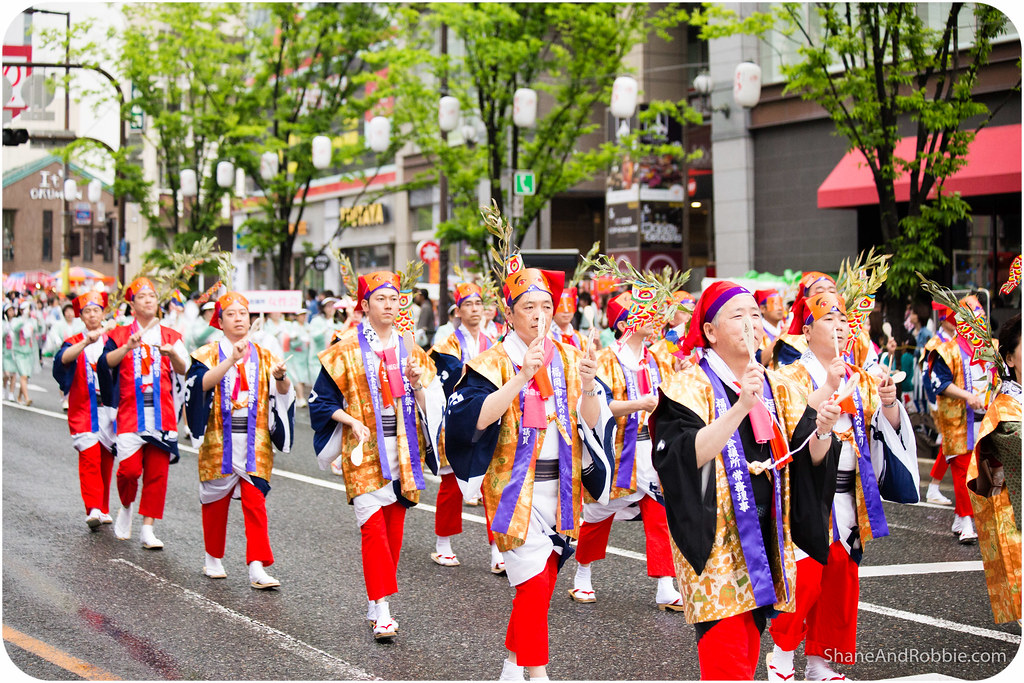 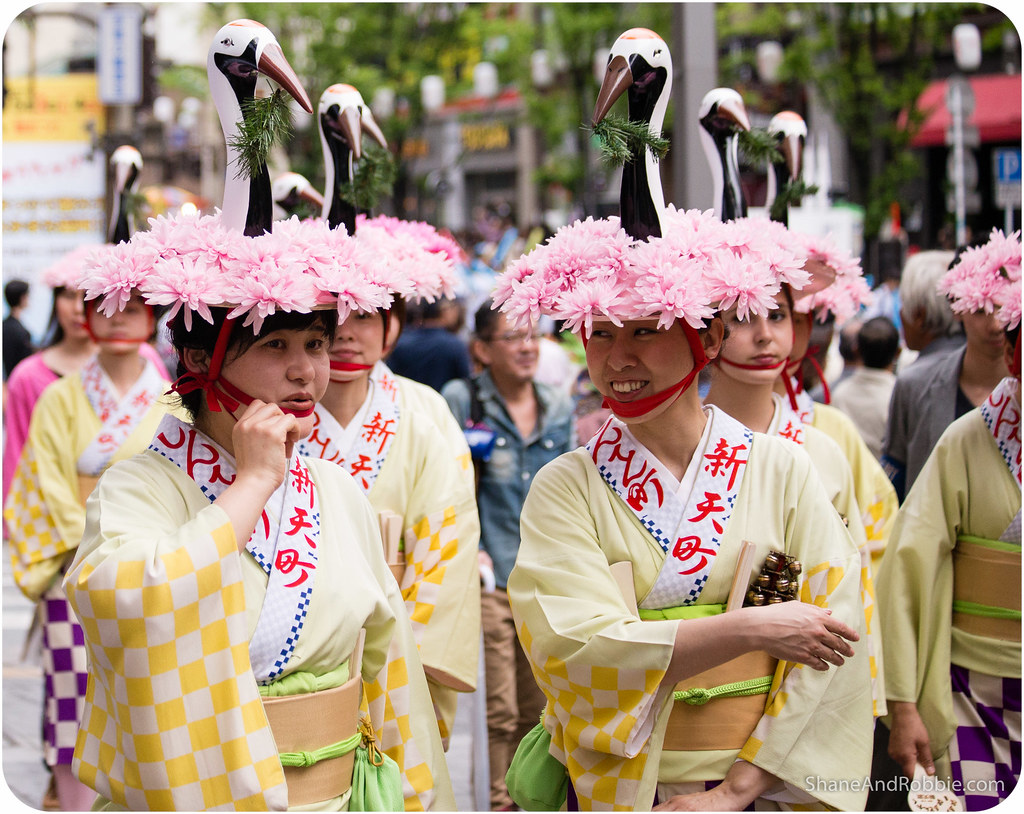 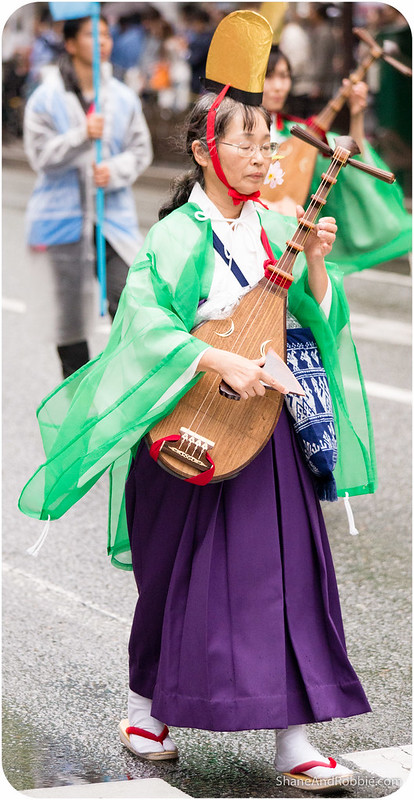 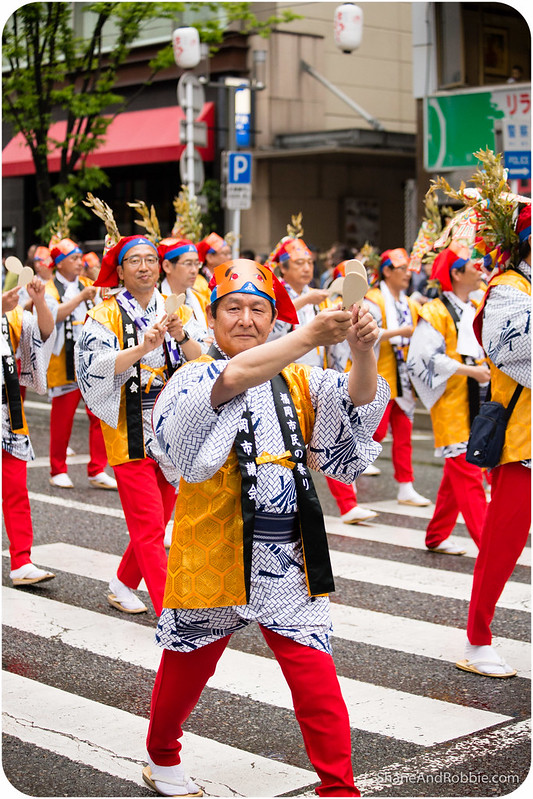 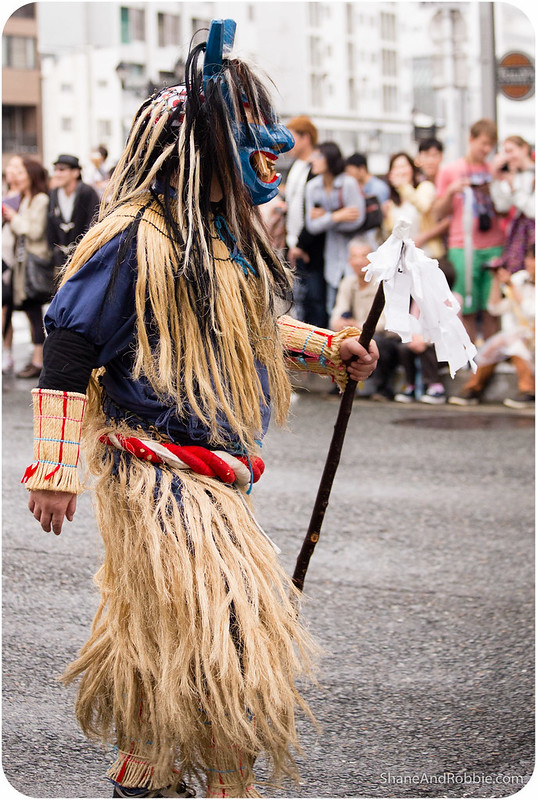 This festival attracts more than 2 million spectators and is one of the busiest in Japan – as we found out today. The crowds were unbelievable! It was a little overcast and wet at times, but the occasional shower did little to dampen the crowds’ enthusiasm – us included! 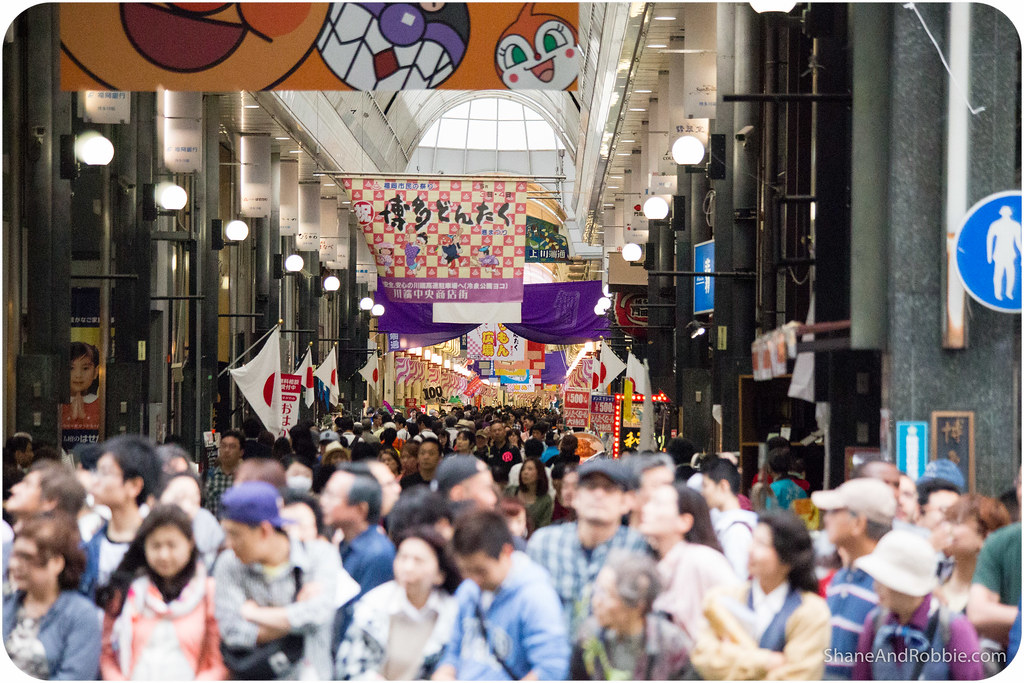 As well as the main there were also about 30 stages set up around the city and loads of street stalls selling takoyaki (i.e. cooked octopus in batter), yakitori (i.e. chicken bits on skewers), corn on the cob, grilled squid on a stick, and various other edible bits. 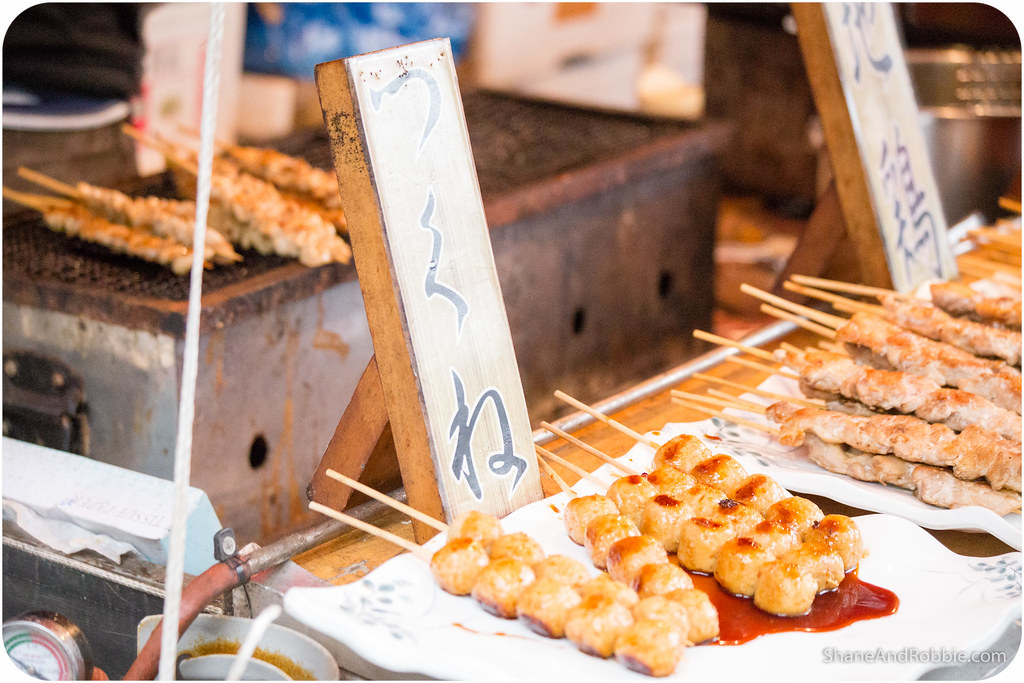 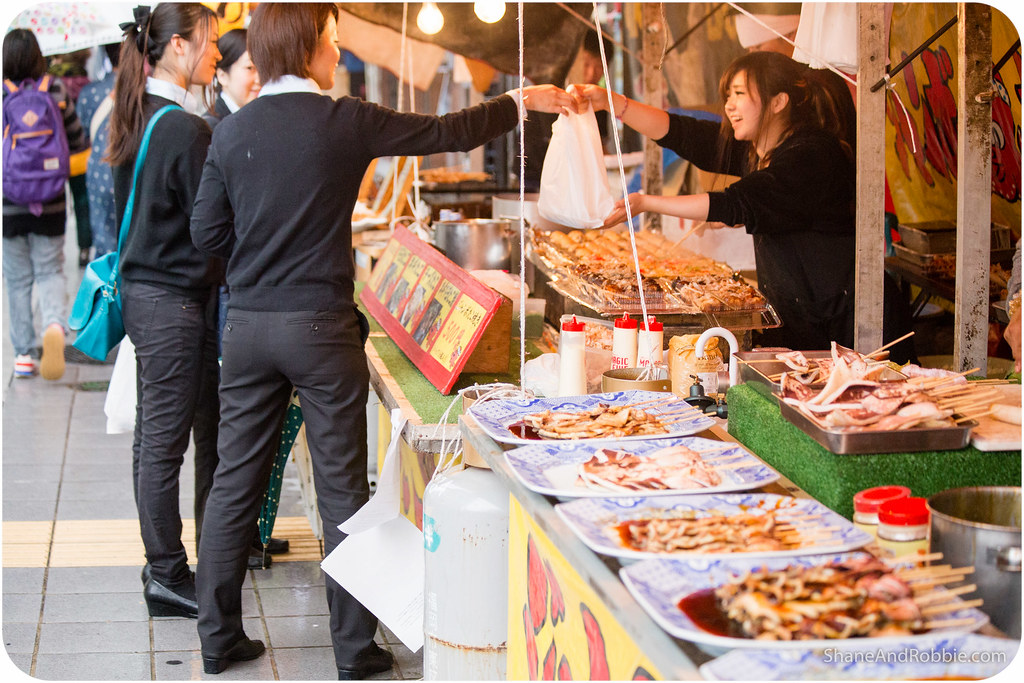 Many of the festival performers were carrying shamoji (i.e. wooden rice serving spoons), and beating them together rhythmically. Symbolising abundance and plenty*, the shamoji are used as the symbol for this festival and were available at stalls as souvenirs.
*There’s also a note in the festival brochure that says the shamoji symbolise that the festival is for everyone – it’s a arty for the people. The rice servers are supposed to evoke the image of a woman, busy preparing a meal, dashing out to join the parade passing in front of her house. 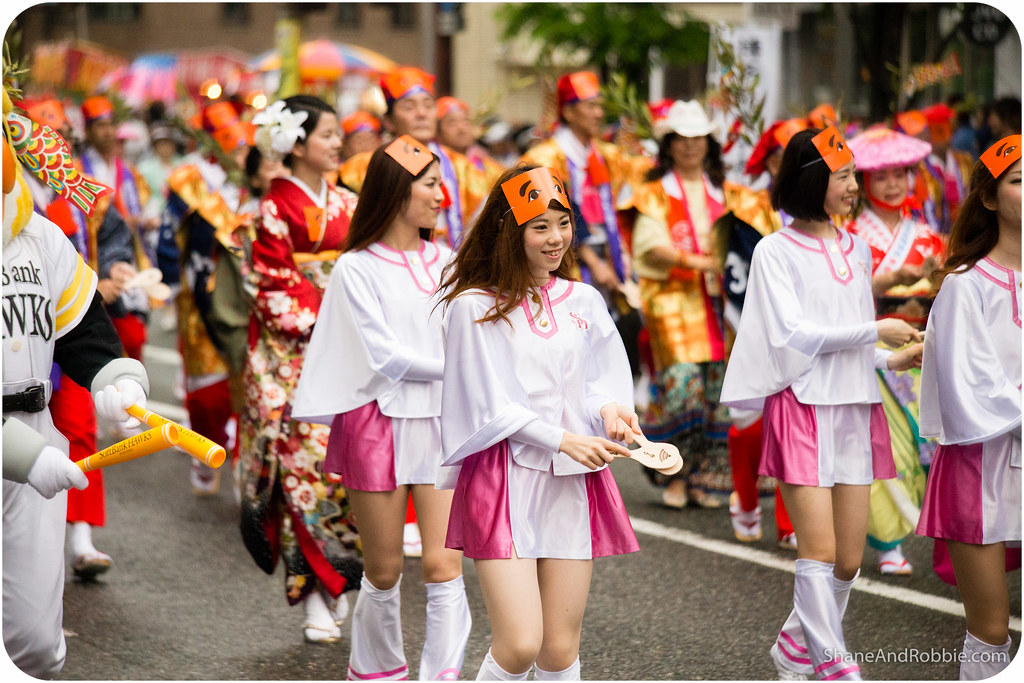 The niwaka masks were another common feature at Dontaku. Traditionally this mask was worn by comedians to hide their identity so they could poke fun at people without being identified. These days they are worn for fun at the festival. 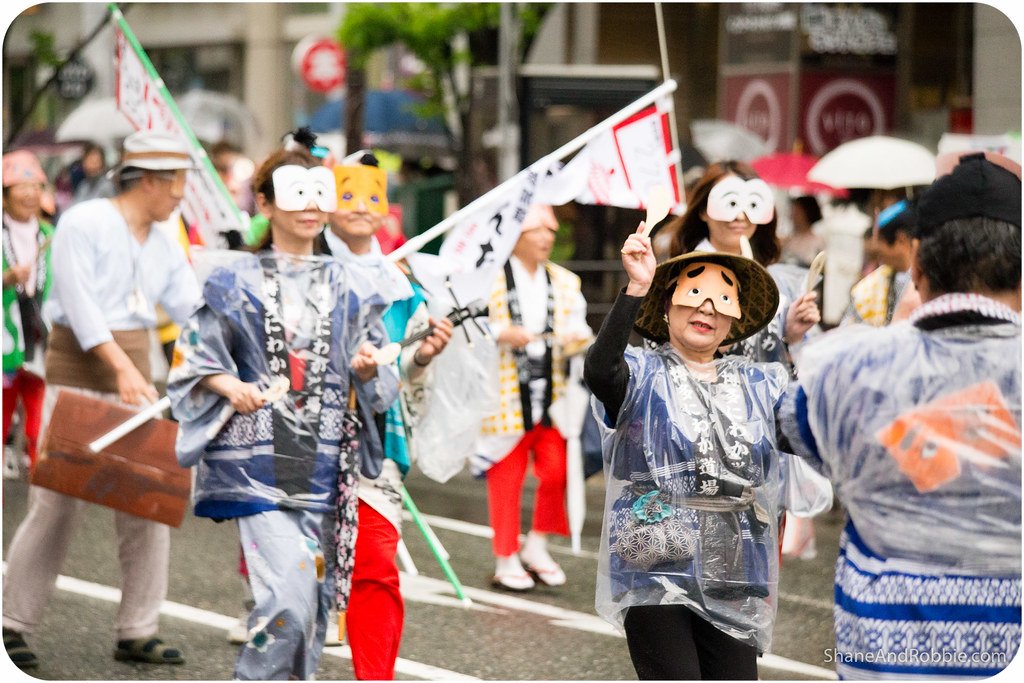 As we walked around, we stumbled across various stages where dances, folk music, and other displays were keeping people entertained. The parade of brightly decorated vehicles called hana jidosha was also entertaining. 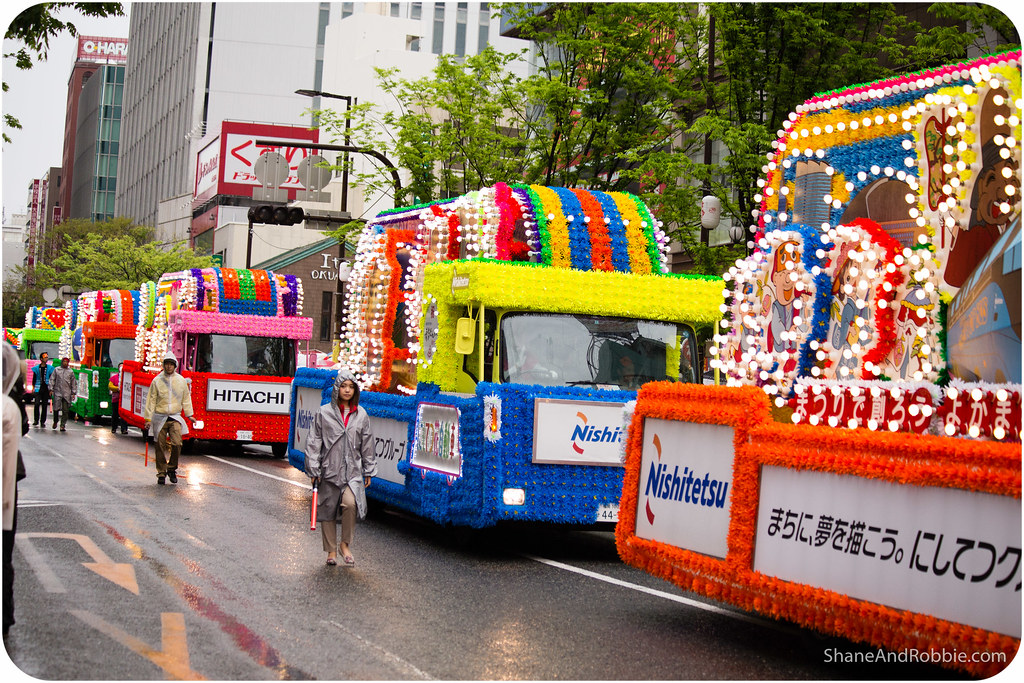 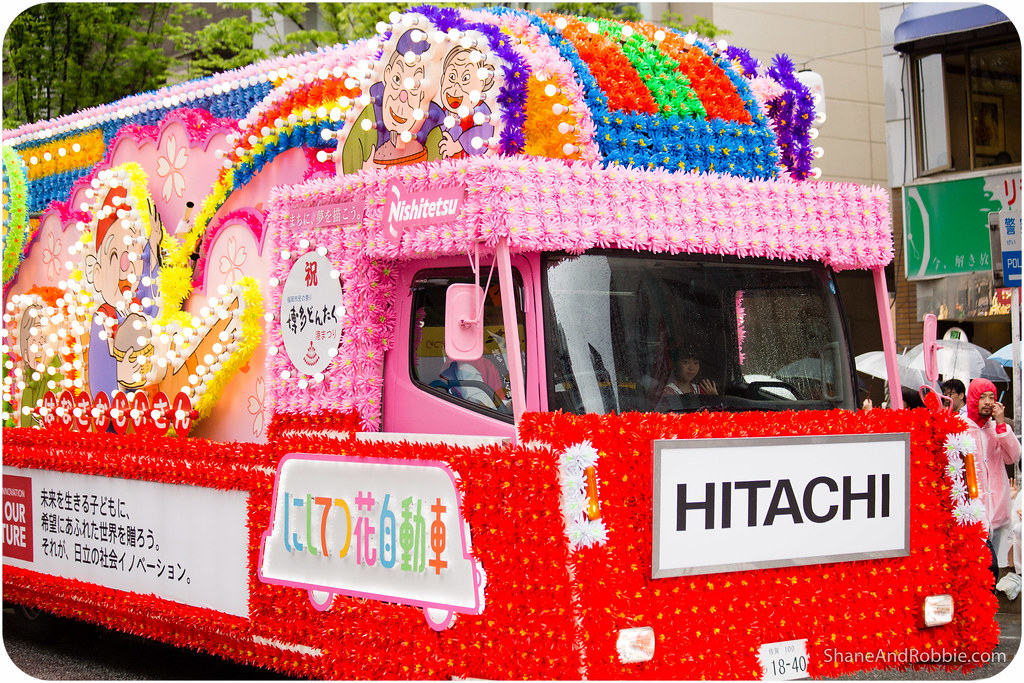 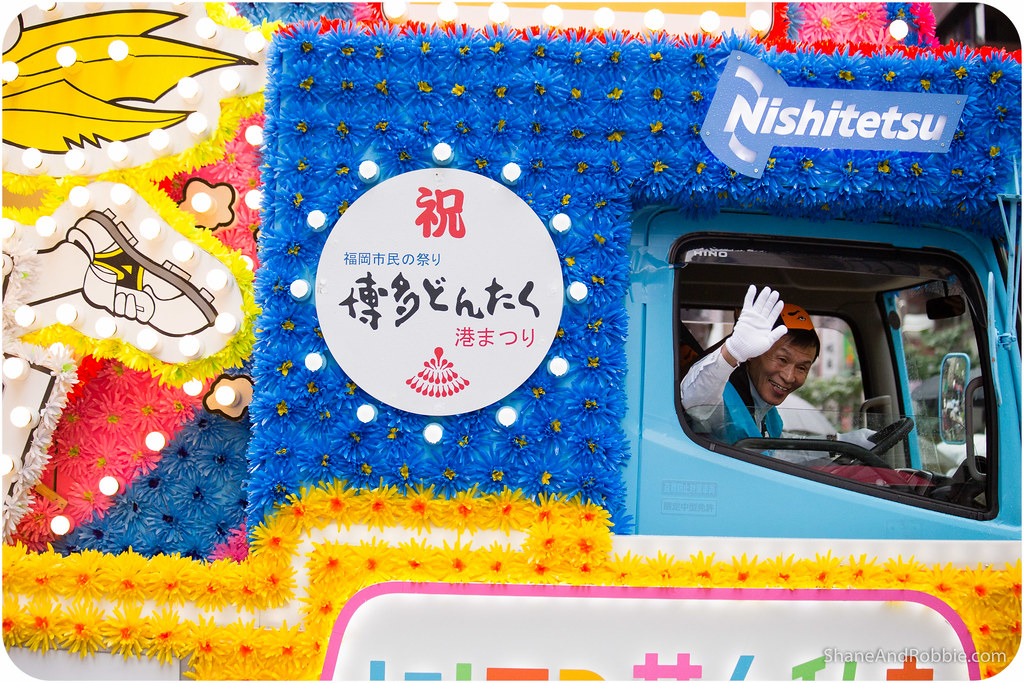 After hours of walking around the festival, we were famished and sought out a nikkuya (i.e. meat restaurant) for dinner. We found a place called “Steak & Beer”, which Shane thought sounded perfect. Turns out it wasn’t “steak” as we would know it, but tongue. Given how expensive beef and lamb can be in Japan, we’ve learnt to enjoy some diverse cuts of meat, including tongue. This place did grilled, flaming tongue, and the tenderest tongue stew ever. We sat at a bench around the central cooking area and got to watch the chef cook sizzling tongue right in front to if us. It was a great meal and a great way to end a fun-filled day of festival fun! 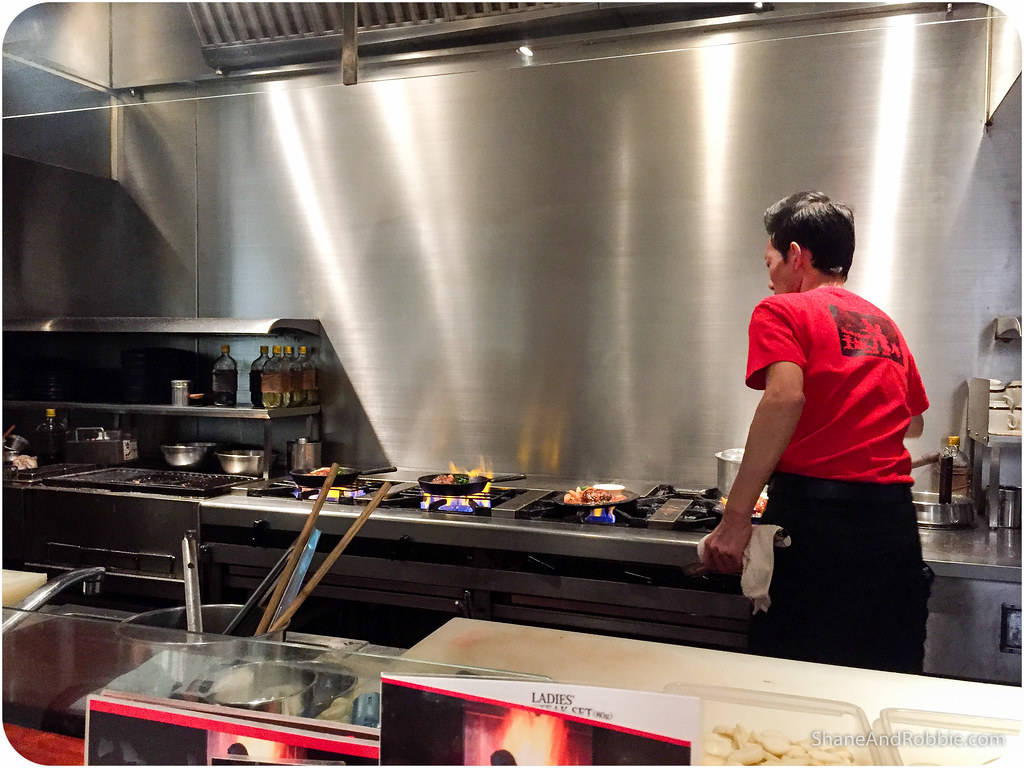 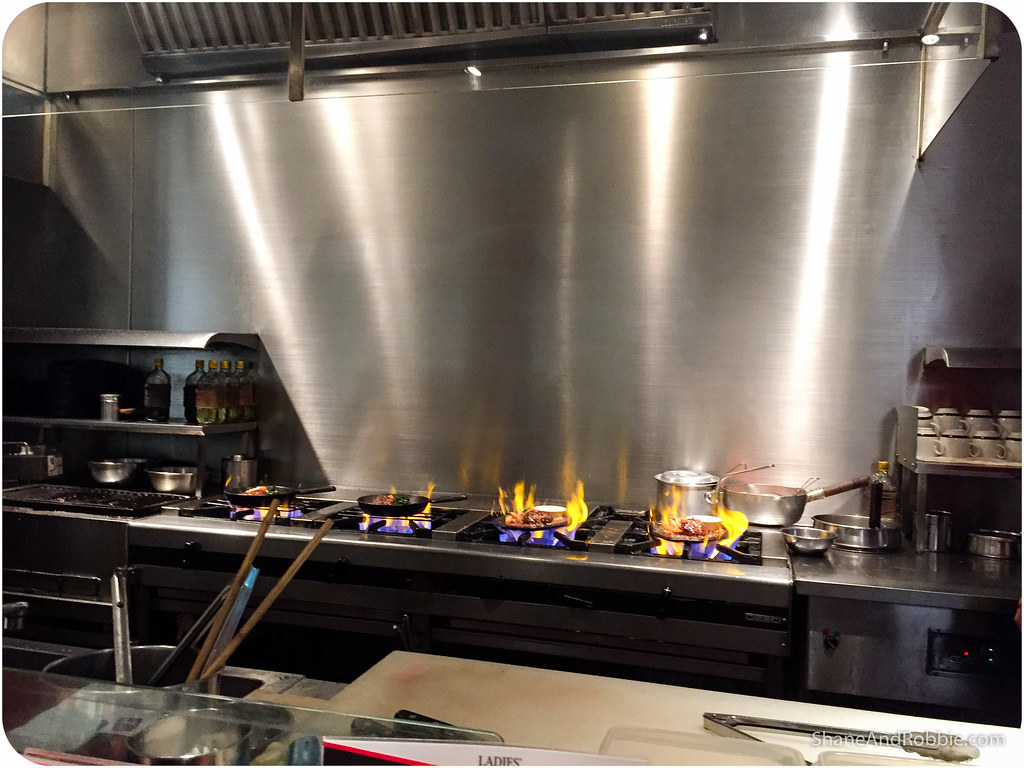 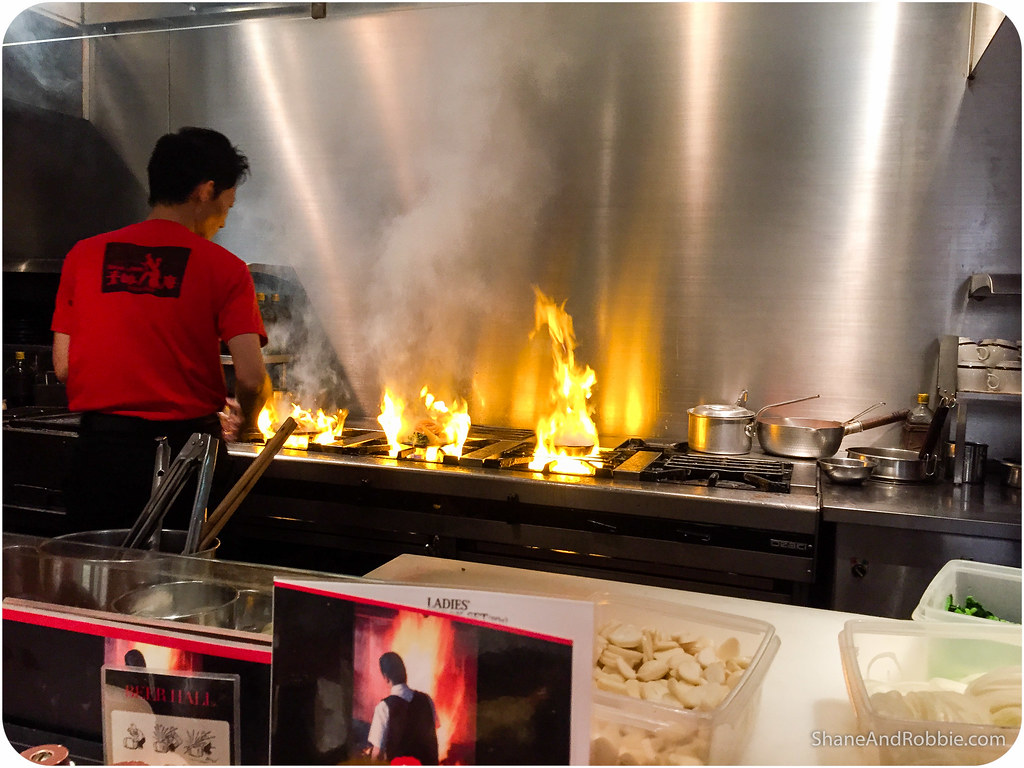 Now we’re on the shinkansen once again, heading back to Kagoshima and thinking fondly of our comfy (but tiny*) bed…
*Japanese hotels offer double rooms and semi-double rooms. Semi-doubles are often cheaper but are much smaller – i.e. semi-doubles are 120cm wide vs. doubles are 140cm. Makes for a cosy night’s sleep! 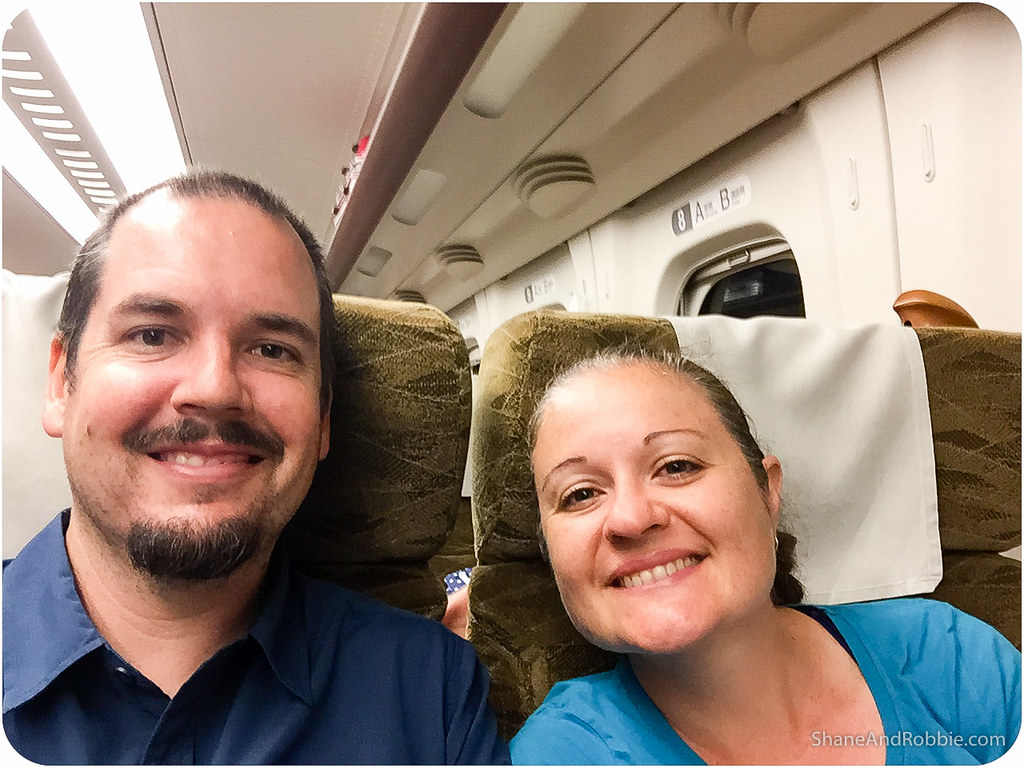