MIDORI SPLENDOUR OF SHIRATANI UNSUIKYO
For our last day on Yakushima island we decided we needed to soak in as much of the island’s magnificent midori* vistas as we could. The best place to do this is up in the mountains, so we went back to the Shiratani Unsuikyo Nature Reserve and did one of the longer hikes through the forest. It was awesome up there and well and truly fulfilled our desire for midori splendour.
*Midori means green in Japanese. 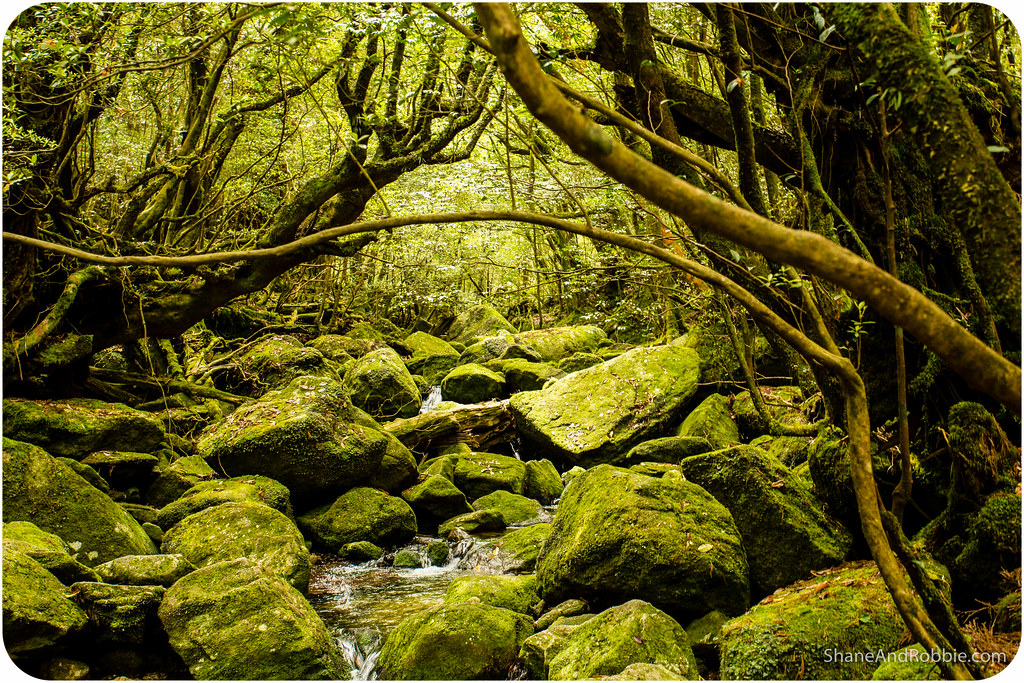 The hike we did runs through a section of the forest that is often referred to as the Princess Mononoke Forest. The moniker is based on the fact that this area served as the inspiration for the Studio Ghibli animated film “Princess Mononoke”. Walking through the forest today we could definitely see how the forests of Yakushima could be inspirational. 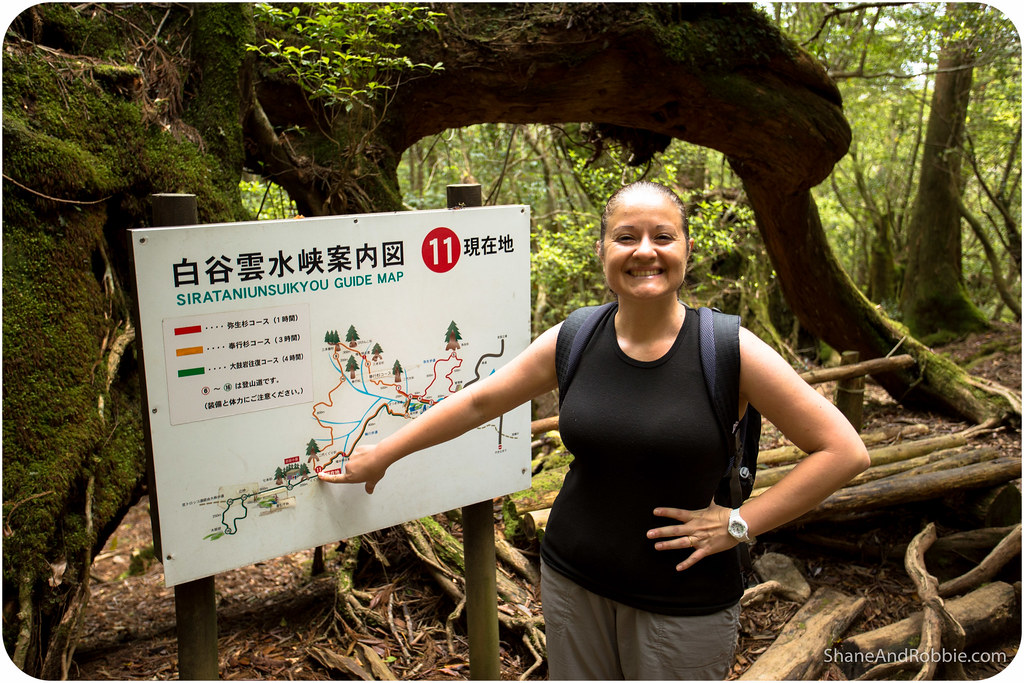 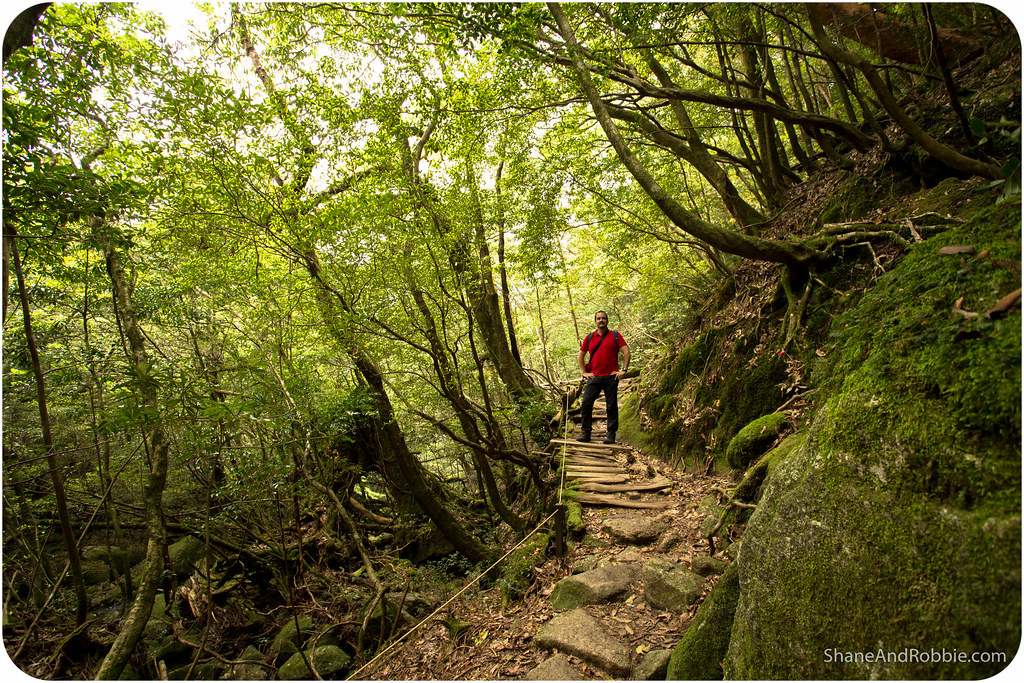 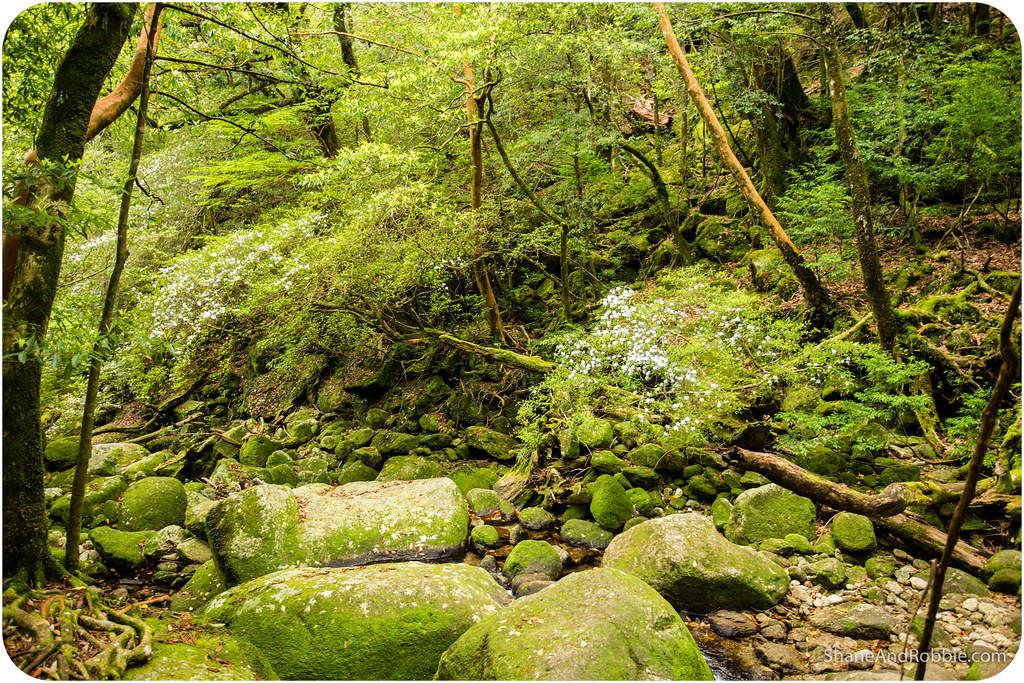 Even 20 years after its release, “Princess Mononoke” remains one of the most popular Japanese anime films of all time, and with good reason. It’s a beautifully told story based in feudal Japan that centres on the struggle between the supernatural guardians of a magical forest and the humans who consume its resources. The environmentalist theme of the story seems all the more poignant when you see how majestic the “real life” version of Princess Mononoke’s magical forest actually is. 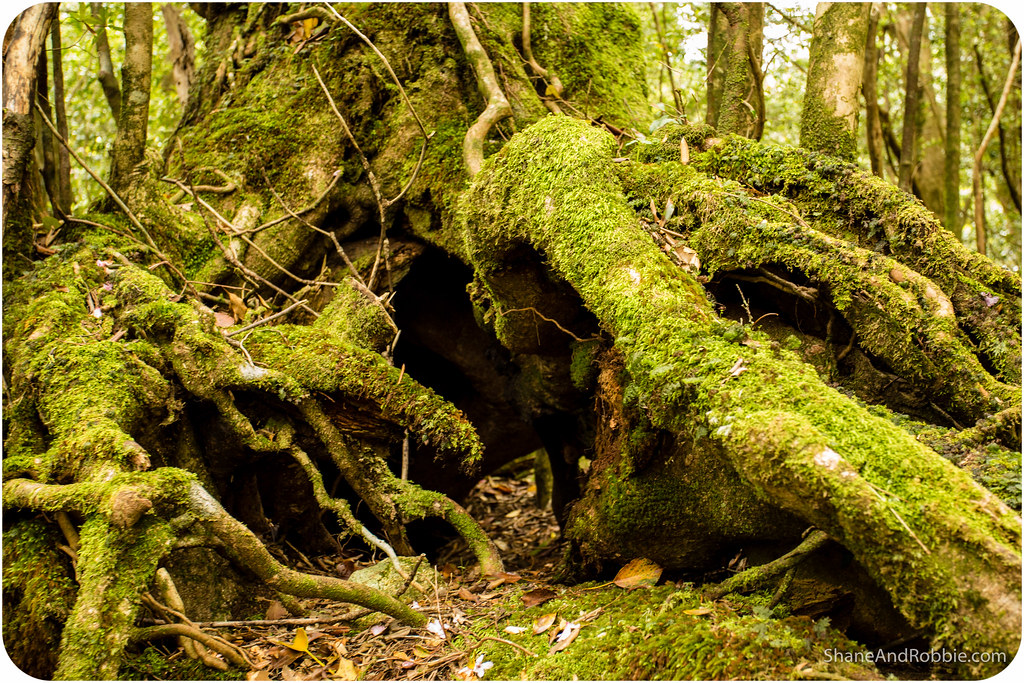 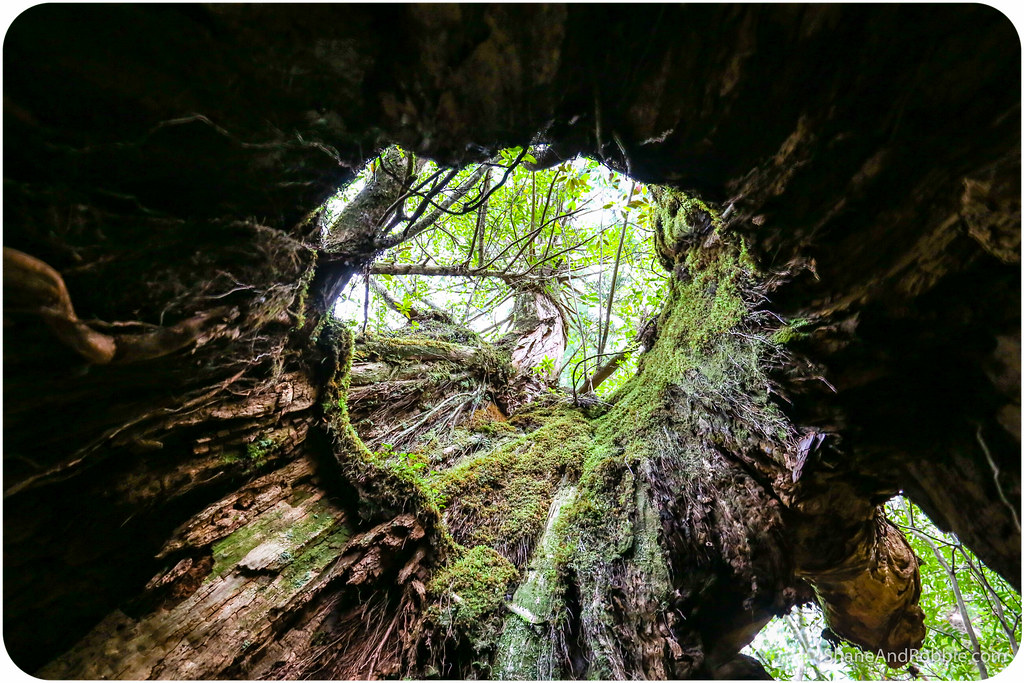 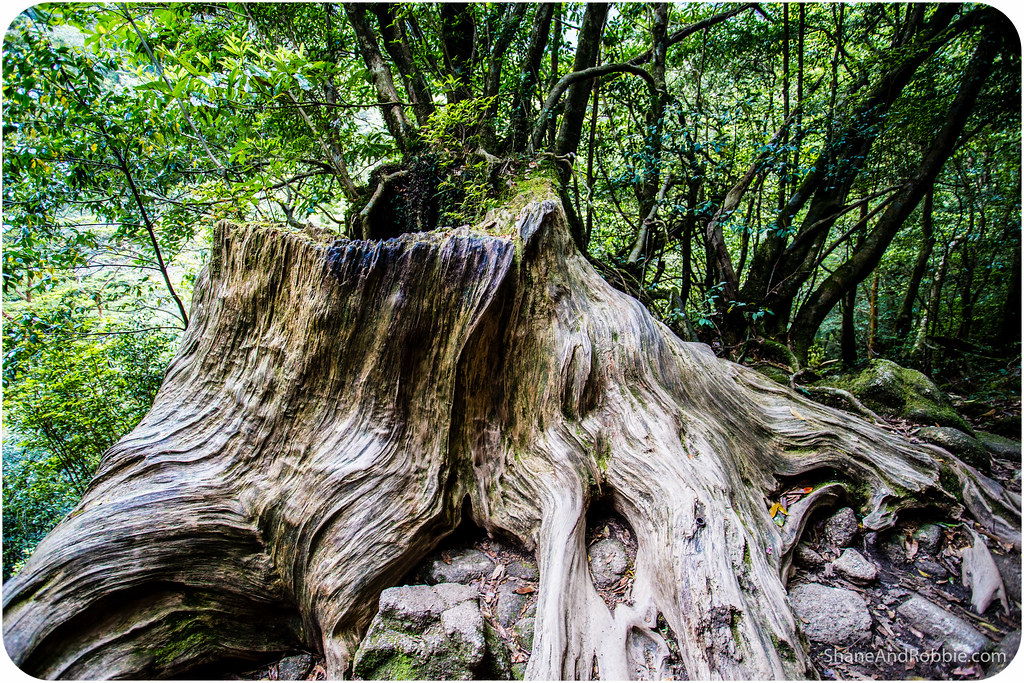 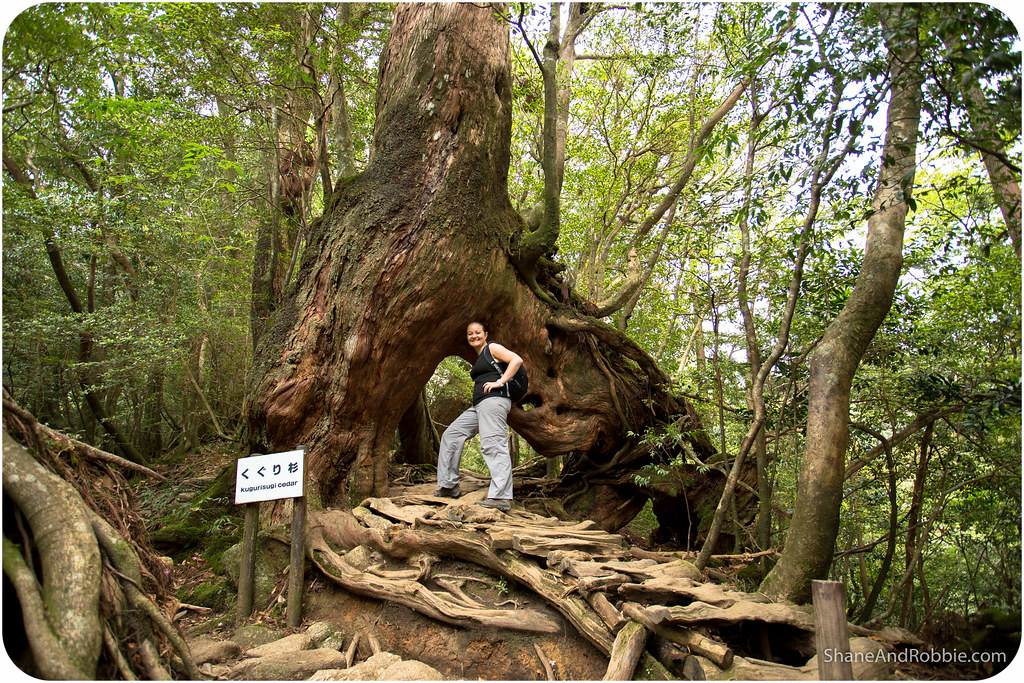 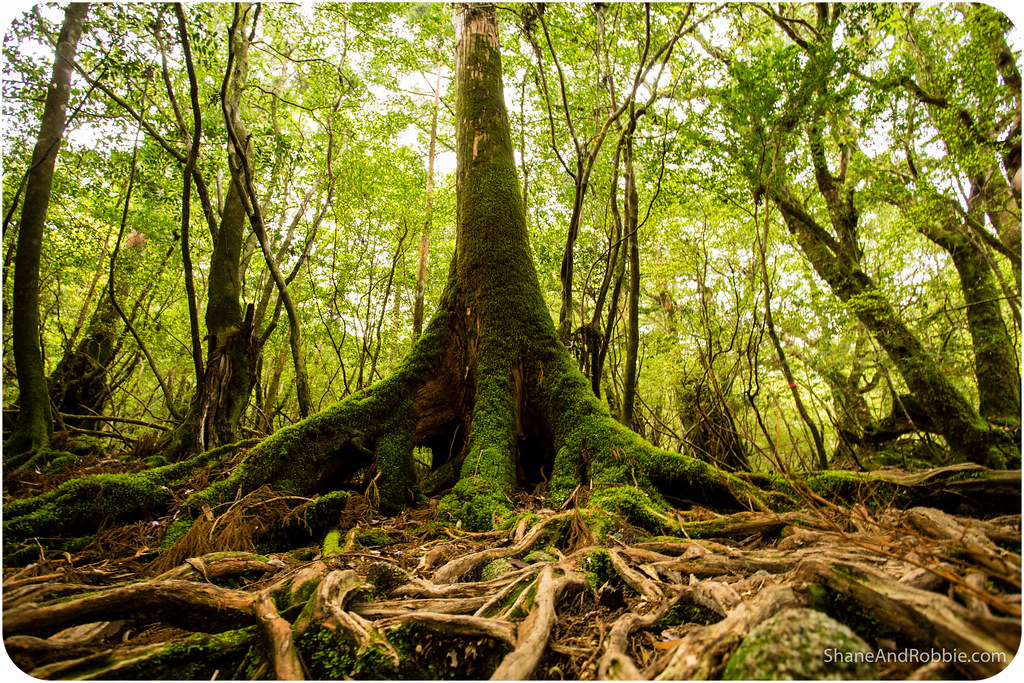 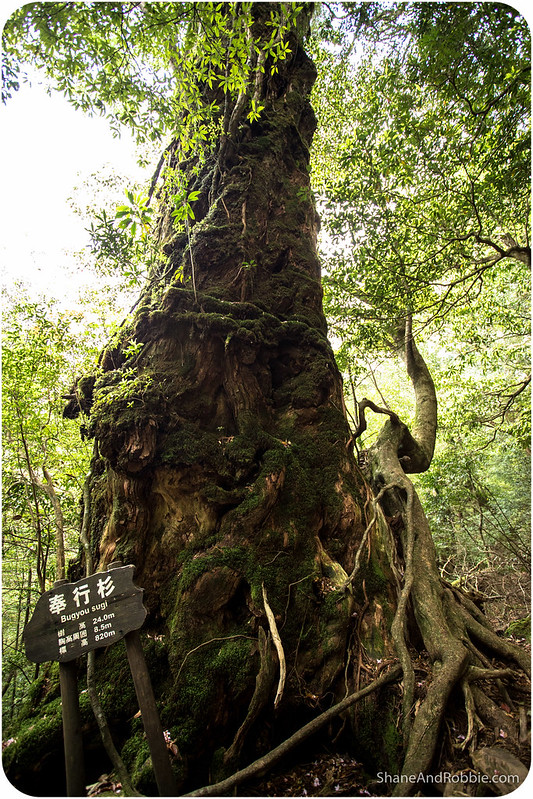 All along the hike there were old cedar trees that had us gazing up in wonder. Sitting under the eaves of the forest we could just imagine the kodama* that reside in this area peaking out from under bushes and from behind the trees around us.

*A kodama is a Japanese tree sprite that exists to protect its home tree. In “Princess Mononoke” they are portrayed as small, white humanoids with large, rattling heads and big black eyes. Japanese folklore states that not all trees are protected by kodamas, but those that are need to be cherished. The knowledge of those trees that have kodama living in them is passed down through the generations and, even today, cutting down a tree which houses a kodama is thought to bring misfortune. Such trees are often marked with rope to indicate its spiritual value. 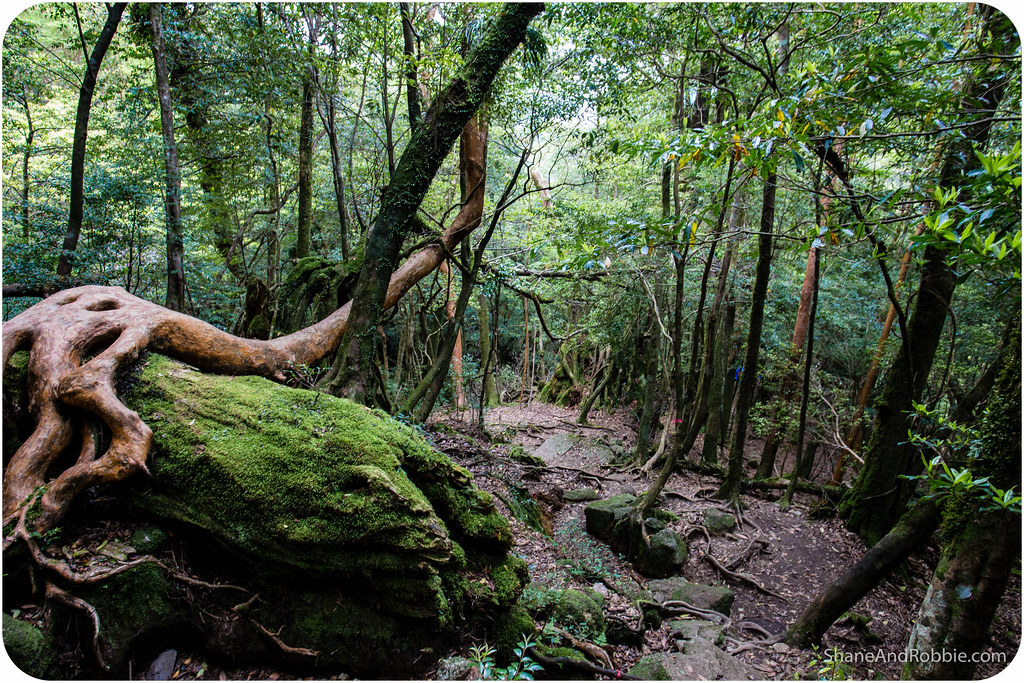 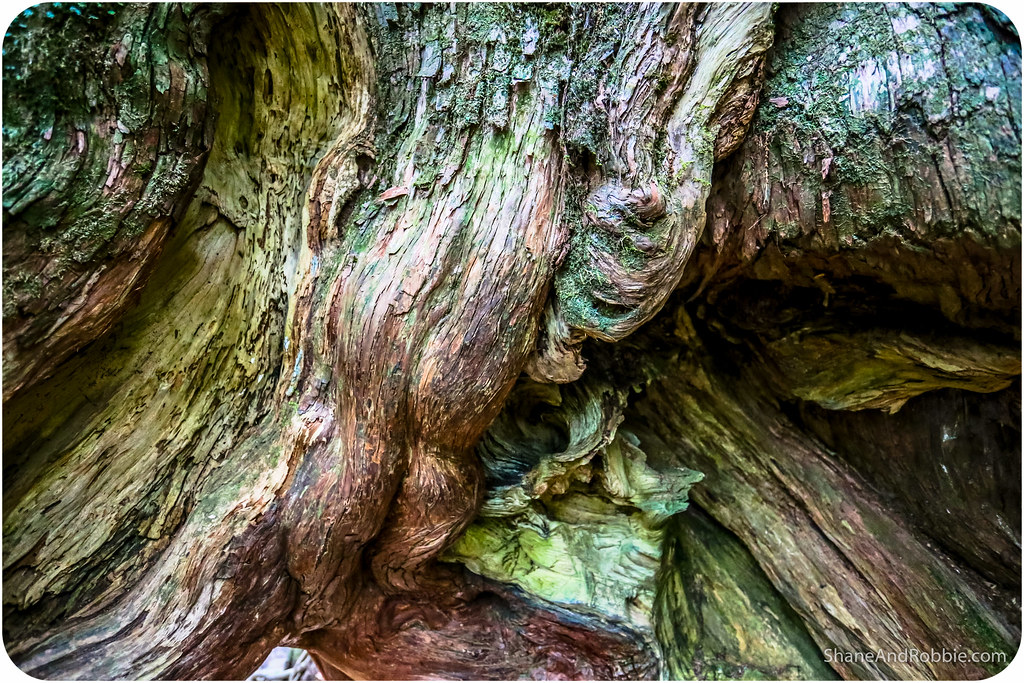 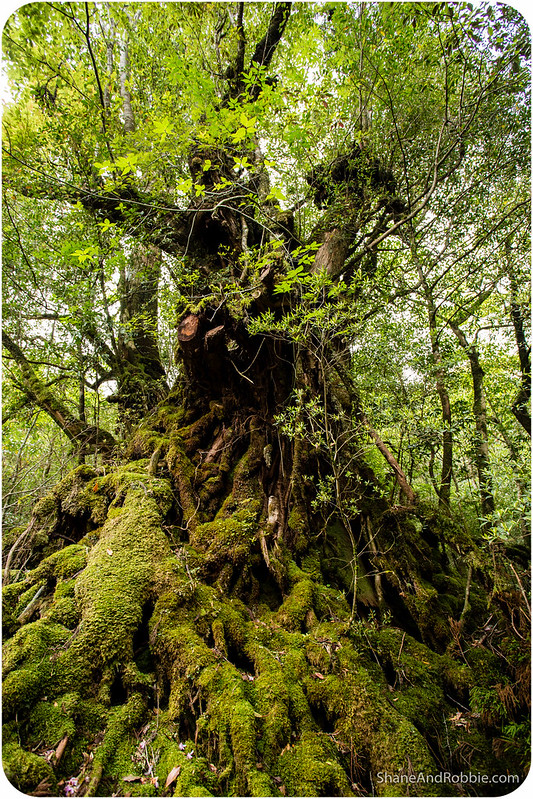 Throughout the hike we had to cross a number of streams and rivulets, and gained an appreciation for just how much water really does pour off the mountains here. The intense green of the moss-covered rocks in and around the streams we passed was incredible. We never realised there were so many shades of green! 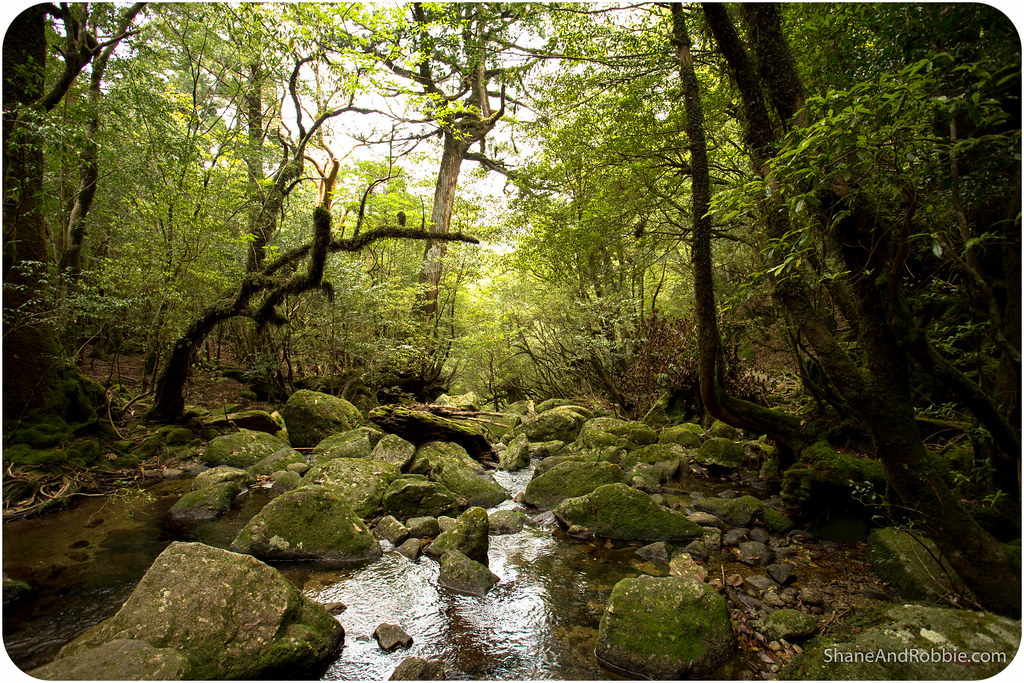 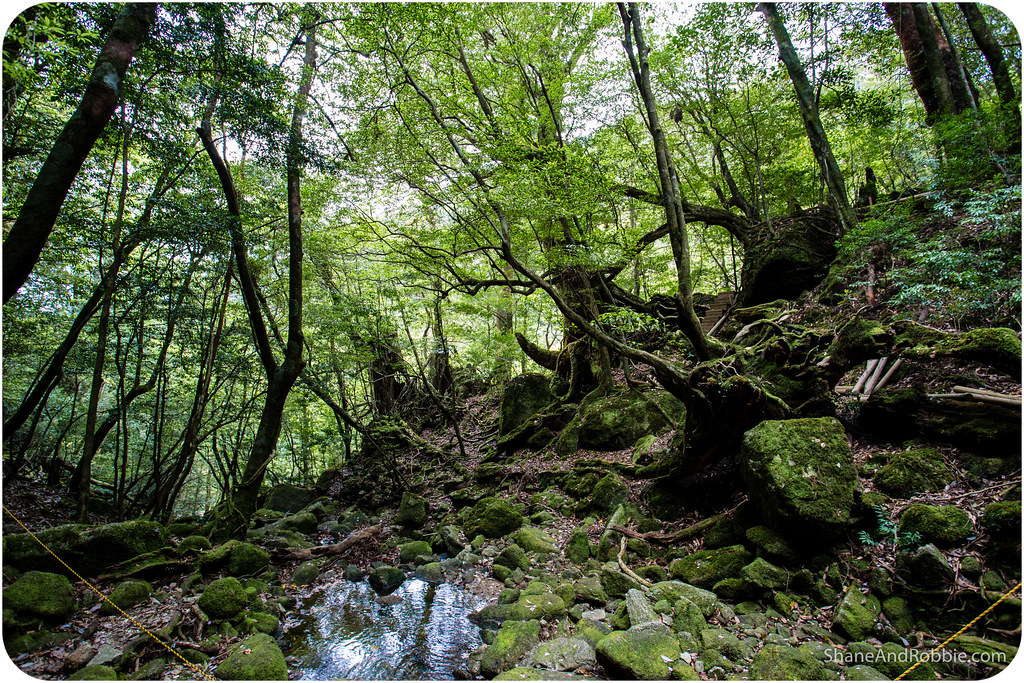 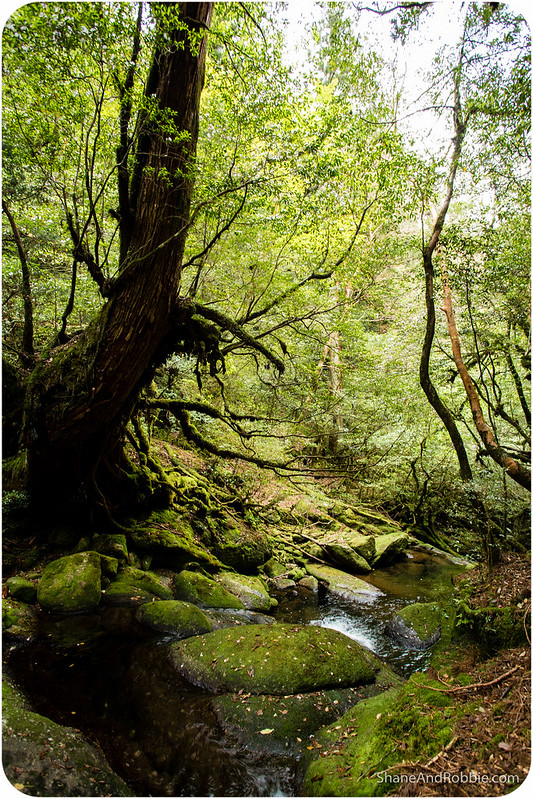 There is definitely something special about this place, and as challenging as the hike was at times*, we spent most of the day in awe of our surroundings. The hike was well signed posted, with little pink markers every few metres, which is just as well because it would have been very easy to get lost up there in the midst of all that green!

*We blithely set out on our hike in our regular day hiking gear. Lucky for us we had another rain-free day, so the route was relatively dry and we were fine. But if it had rained, we couldn’t have made it without some proper hiking gear. Most of the time it was more of a scramble than a hike, with every step up and down being fraught with hazards such as slippery moss, tree roots, and granite rocks. This was NOT a stroll along a perfectly maintained walking trail, this was quite a challenging test of balance, endurance, and fitness! Awesome and totally worth it, but not one to attempt without good shoes and proper hiking gear. 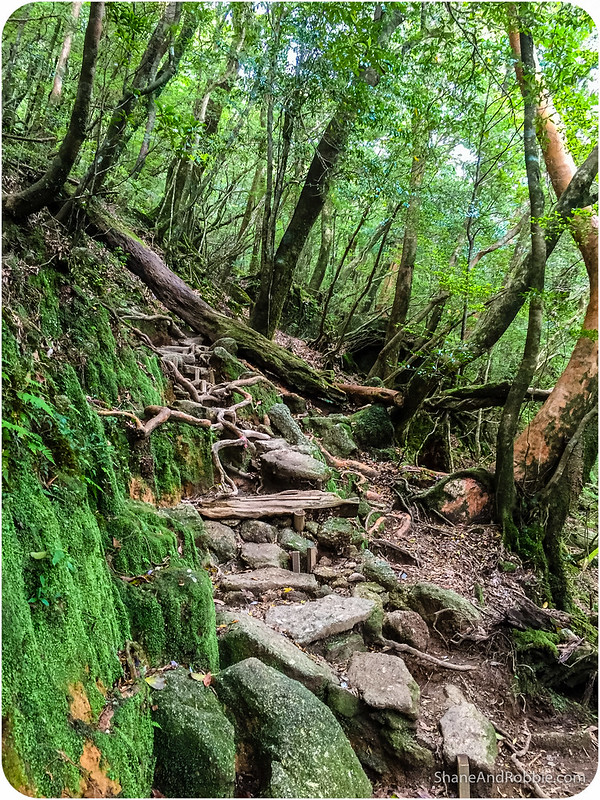 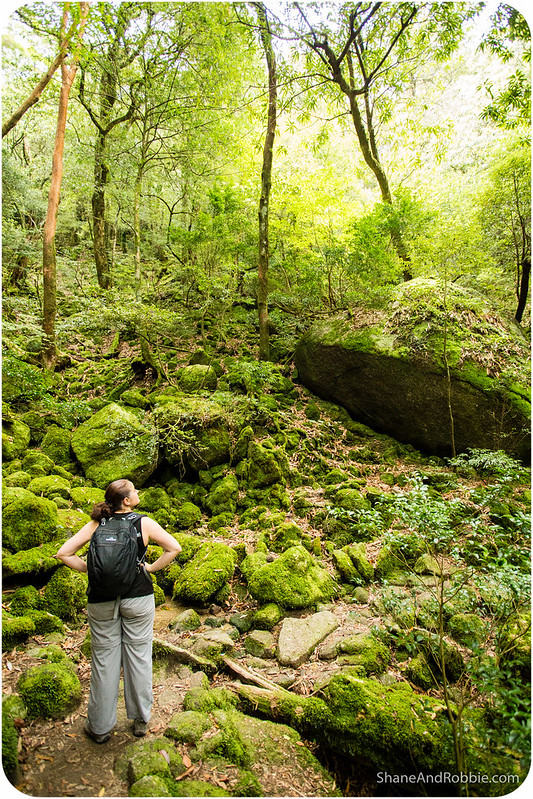 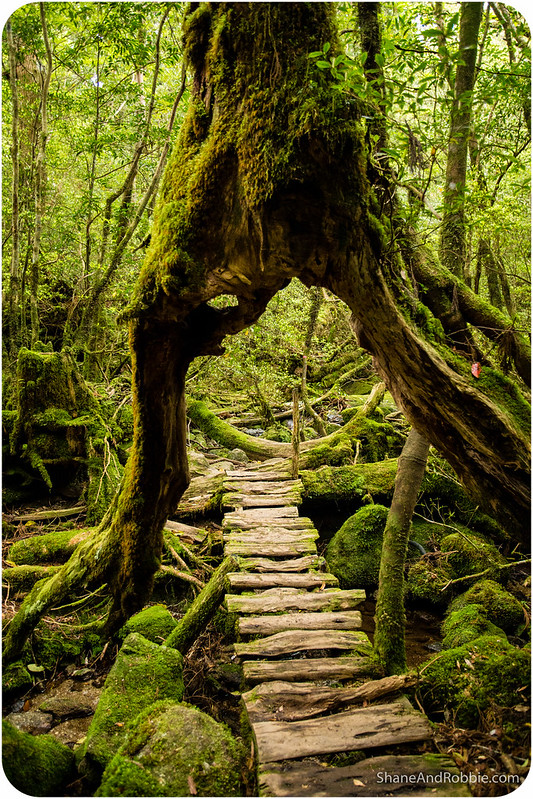 We had our picnic lunch up there on the mountain and then continued the scramble home. By the time we got back to the entrance of the nature reserve we were exhausted, but ecstatic at having spent another day in the forests of Yakushima. We definitely got our fill of GREEN today and left the mountains with a sense of joy, peace and serenity that will hopefully stay with us for a while – especially given today is our last full day in Japan and we’re moving on to Hong Kong next! 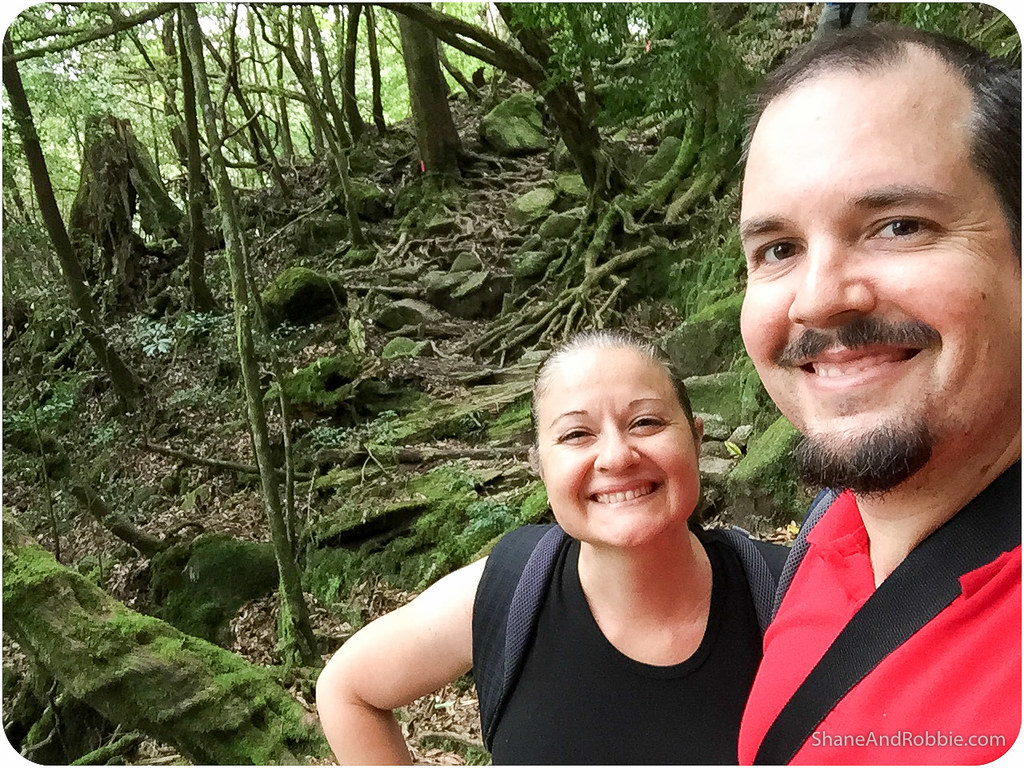