NEIH HOU FROM HONG KONG!
Our first full day in Hong Kong and we are feeling excited, appalled, overwhelmed, exhausted and exhilarated, all at the same time! What a city! So many people, buildings, and cars! Such a mixture of sights, sounds and smells! One thing’s for sure, we ain’t in Kansas no more Toto…. 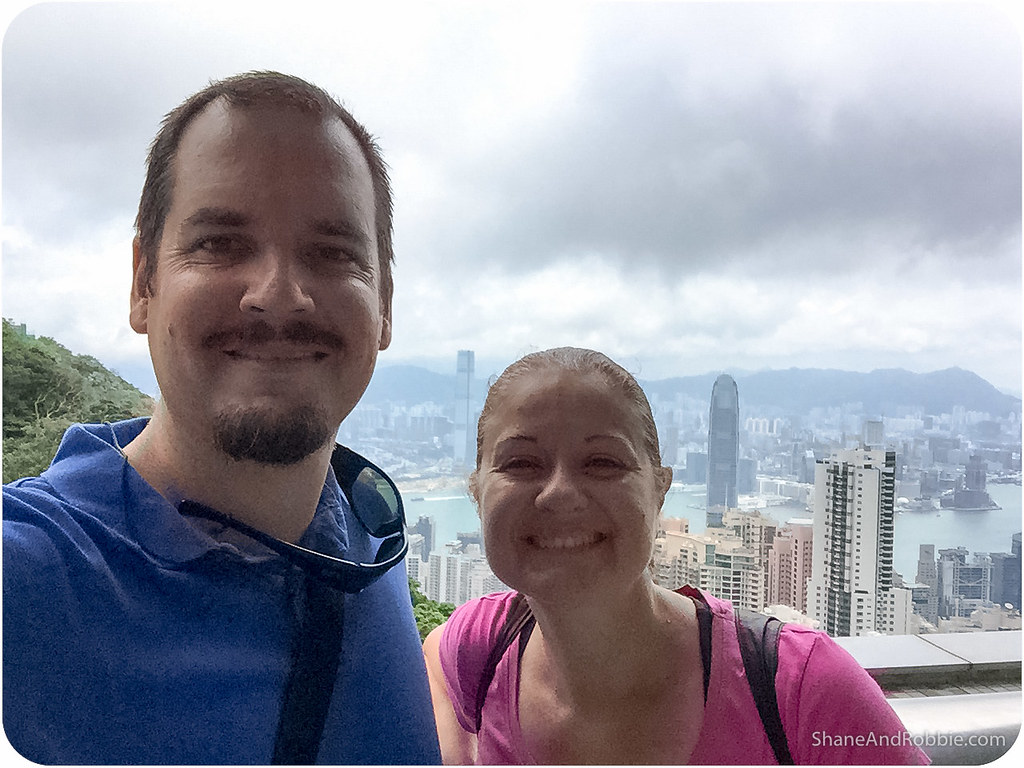 We arrived into Hong Kong airport late last night and, as soon as we hit the 30C and 90% humidity (this is at 11:00pm at night mind you), we knew we were in trouble. We thought Brisbane was hot and humid?! Holy crap, Hong Kong makes Brisbane seem temperate and pleasant by comparison! You don’t so much breathe the air here as chew your way through it. Thank goodness for air conditioners, otherwise we would be 2 puddles of sweaty gweilo* jelly!
*Gweilo is the Cantonese slang term for foreigners. It was once used pejoratively to mean “foreign devil” but today is used as a general term to mean “foreigner”. 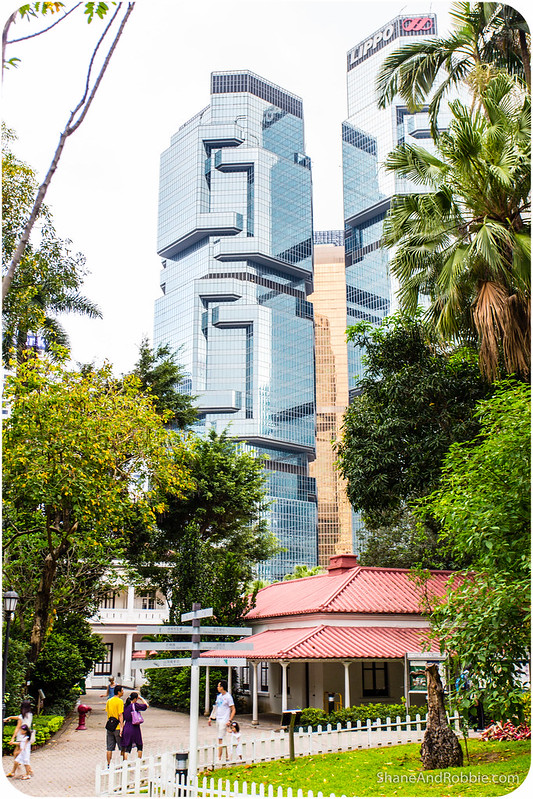 We arrived after all the trains and buses to the centre of Hong Kong had stopped running so our only option was to catch a cab to Sheung Wan where we’re staying. The taxi ride into town was hilarious and terrifying – we were both white knuckled, hanging on for dear life, as we raced along Hong Kong’s expressways at 130km/h in a clunky old 1990 sedan that looked it had already been in a few scrapes. Our cabbie must have been an aspiring rally car driver, the way he was screeching around corners, undertaking people at a million miles per hour, and using his brakes to the limit of their capacity. Let me tell you, by the time we got to our hotel we were WIDE awake! 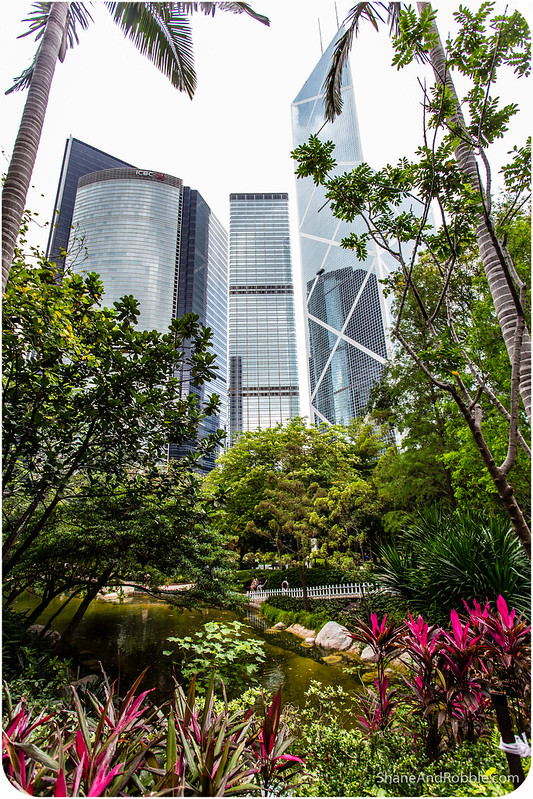 We eventually made it to bed and woke this morning, after a good night’s sleep, ready to explore some of this incredible city. Hong Kong* was once a British colony, and is now a “Special Administrative Region” within the People’s Republic of China. Under the principle of “one country, two systems”, Hong Kong is administered differently to “mainland” China, with many more economic, political and moral freedoms (at least for now). The mix of Chinese heritage with years of British rule has definitely left their imprint on Hong Kong – this is “East meets West” at its best. The street signs are in both Chinese and English; the food culture blends Western and Eastern; and all around us the architecture is a mix of ultra-modern skyscrapers and typically Asian roof-lines.
*Which roughly translates to “Fragrant Harbour” in Cantonese by the way. Makes sense, it does get a bit stinky in places, what with the heat and humidity and press of humanity. 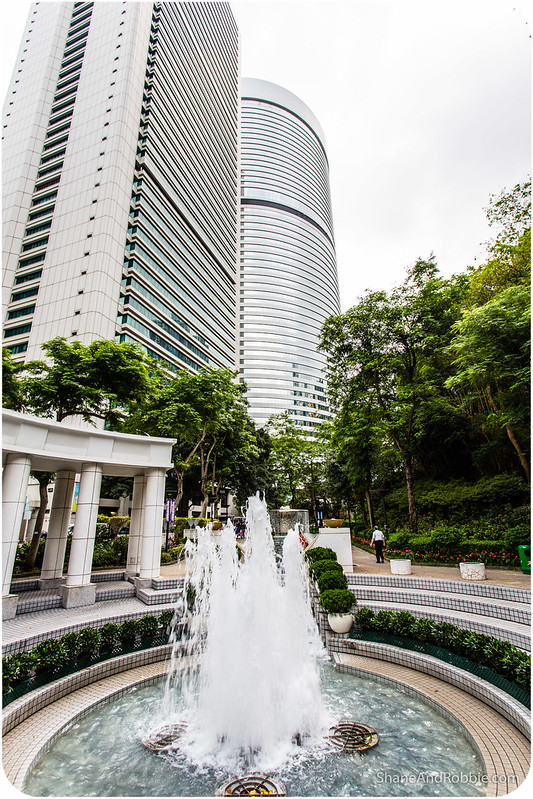 The city state of Hong Kong includes Hong Kong Island, Kowloon (part of mainland China), and hundreds of smaller islands. We’re staying on Hong Kong island itself and focussed our explorations there today, starting with the most iconic destination in all of Hong Kong: Victoria Peak. This 552m mountain is the highest in Hong Kong and sits just behind the main business district. Like millions of other tourists every year (and several thousands of them with us today), we reached the top of Victoria Peak this morning via the Peak Tram. 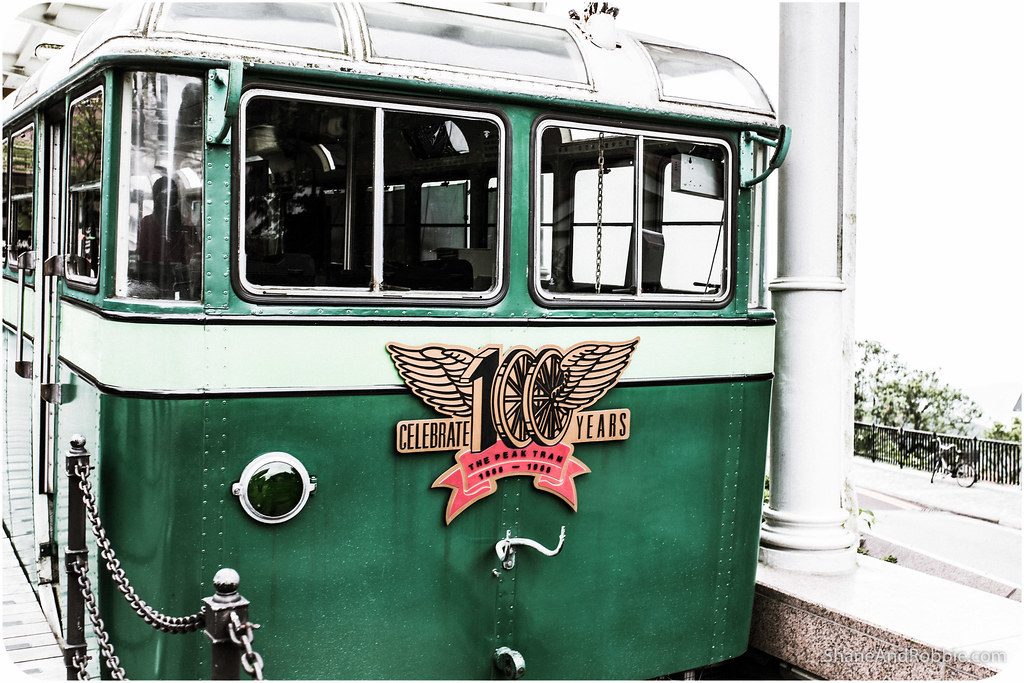 Originally built in 1860, the Peak Tram runs from the Central district to Victoria Peak, covering a distance of about 1.4km and climbing 400m. The views from the tram as went up were great, and they got even better when we got to the top. 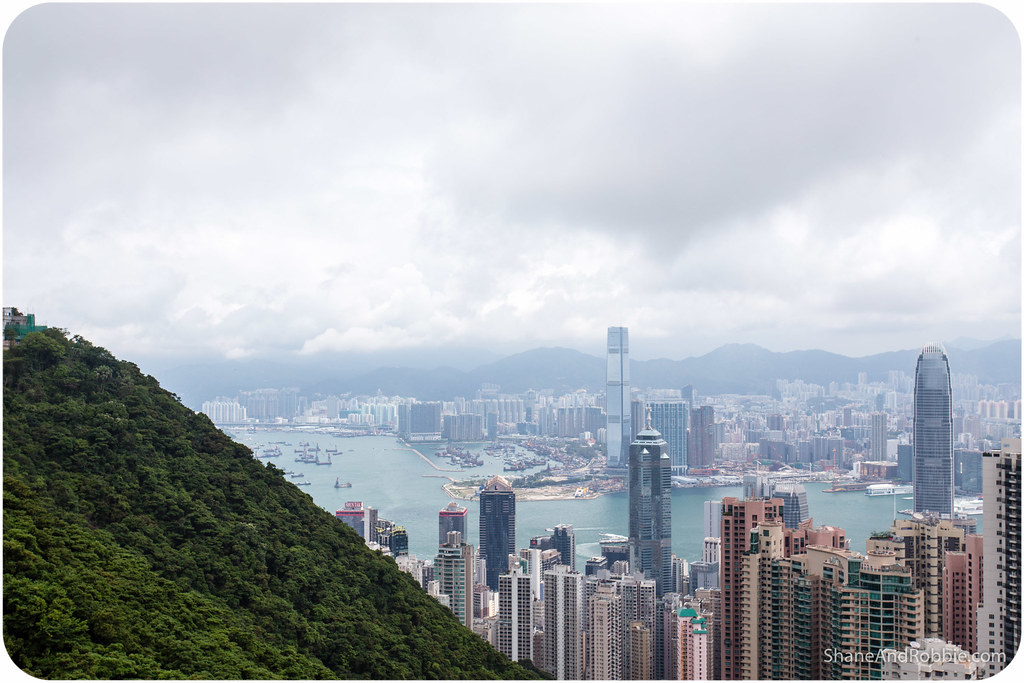 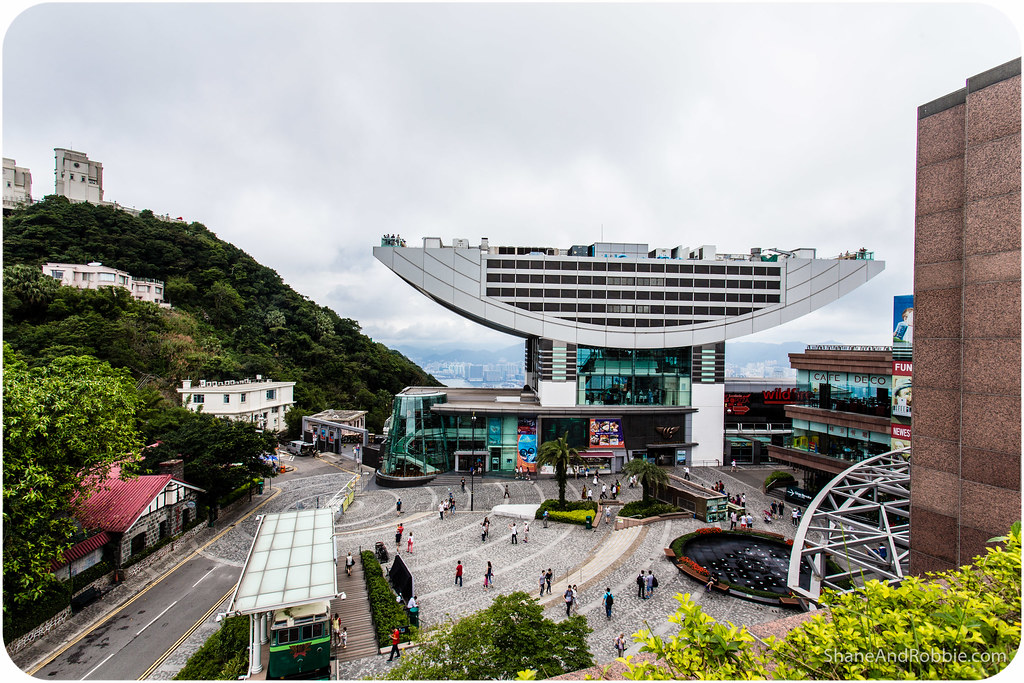 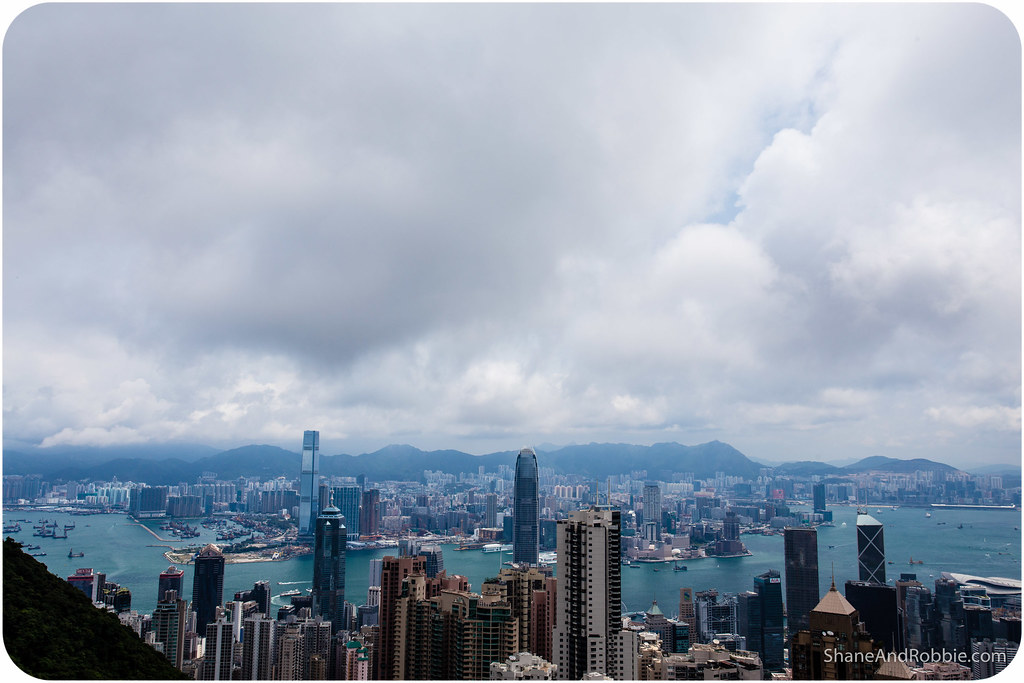 At the top of Victoria Peak there are a couple of shopping centres and a whole lot of restaurants. It was soooooooo busy up there that we quickly ran away from the main shopping area and went for a stroll around one of the mountain-top walking tracks that loop around Victoria Peak. The rainforest that blankets the mountain was incredibly green and it was nice and cool (relatively) under the trees. The views across to the Southern, less populated side of the island were pretty cool too. 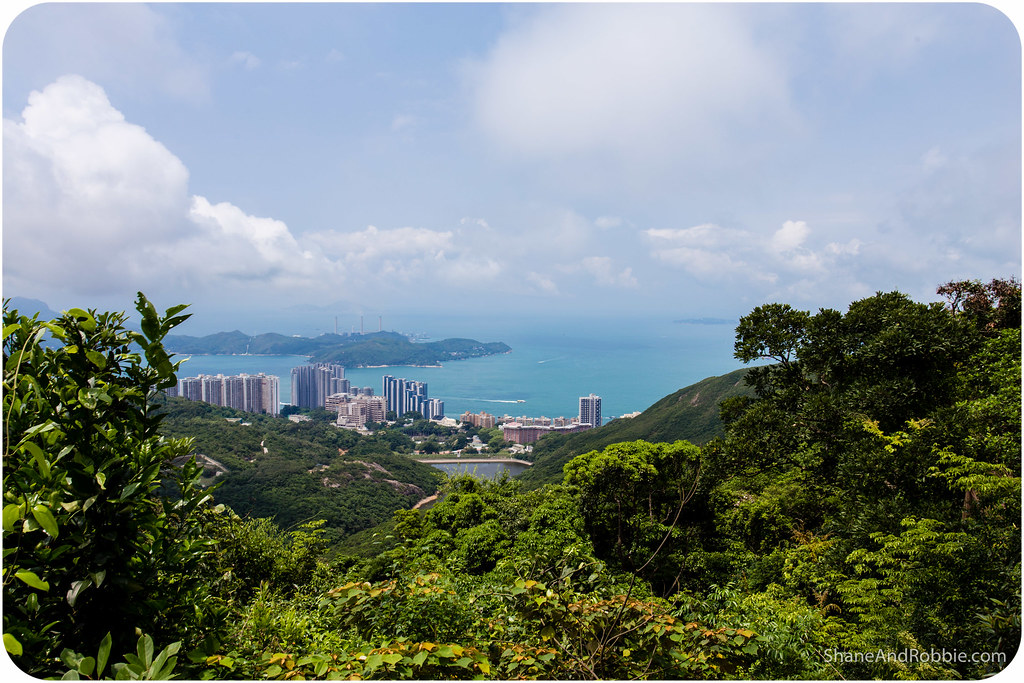 When we’d had enough of the views we caught the Peak Tram back down and went for a wander through Hong Kong Gardens. This large, landscaped park incorporates a whole lot of public facilities (e.g. sports ground, children’s playground, wedding venue), as well as an aviary, fish-filled ponds, and a number of quiet shady spots to sit and relax. The gardens were nice enough, but a little too artificial and “perfectly constructed” for us. Obviously in a city this packed*, however, any green space is good space!
*Hong Kong has a population of 7.2 million people and very little flat land. This means lots and lots of high rise apartment buildings, very little green space, and a very high population density. 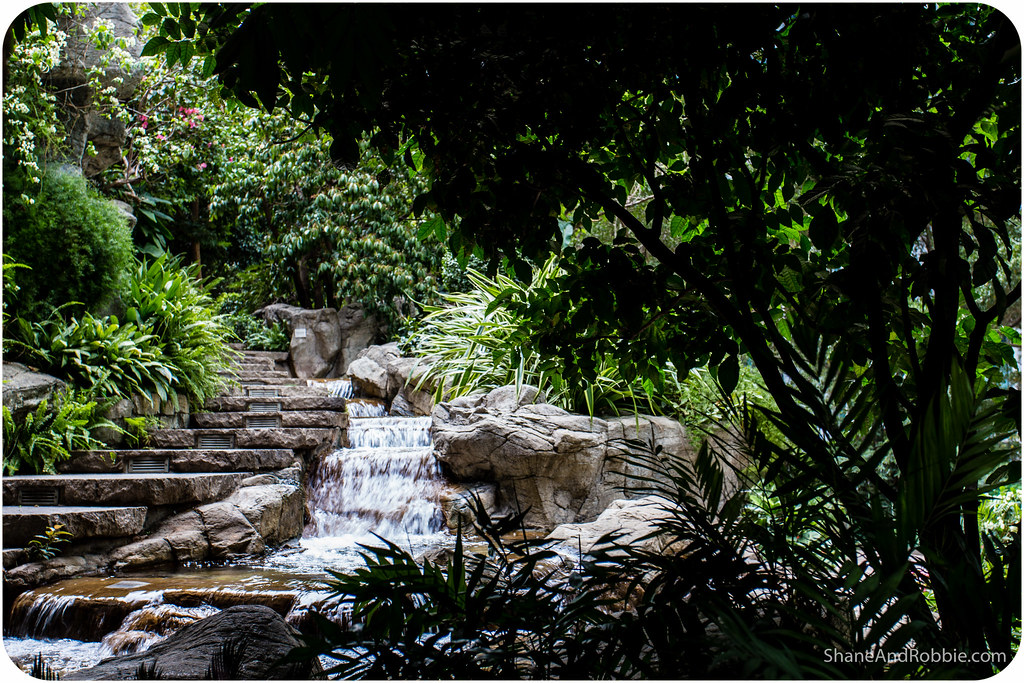 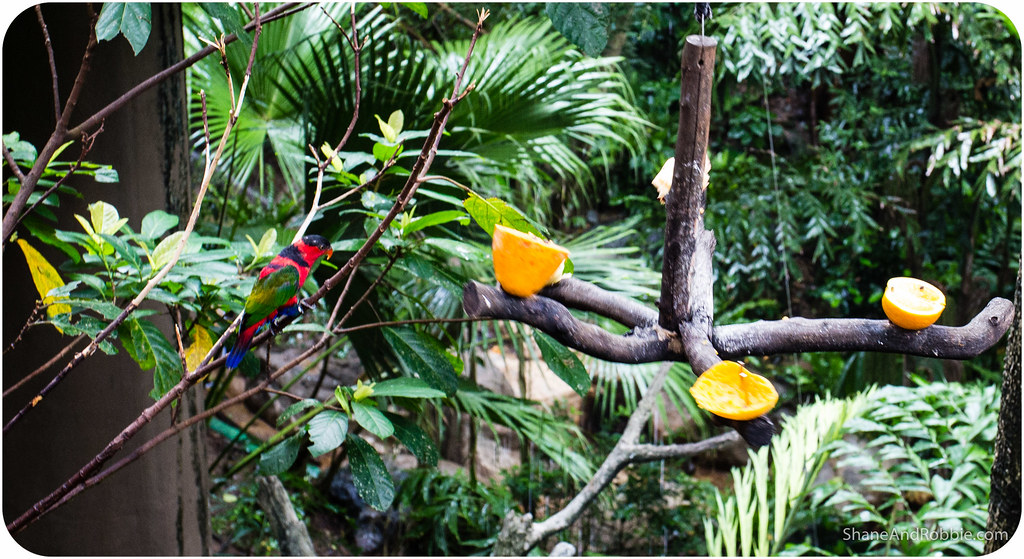 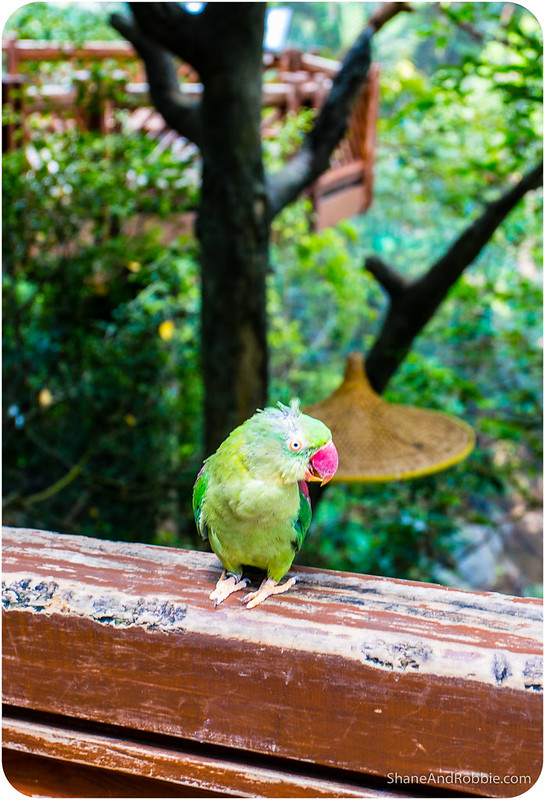 From Hong Kong Gardens it was a short stroll to Statue Square and the main part of Central, Hong Kong Island’s main business district. This is where many multinationals and financial corporations have their headquarters*, and looked like an endless parade of big shiny buildings to us, way down on the ground. 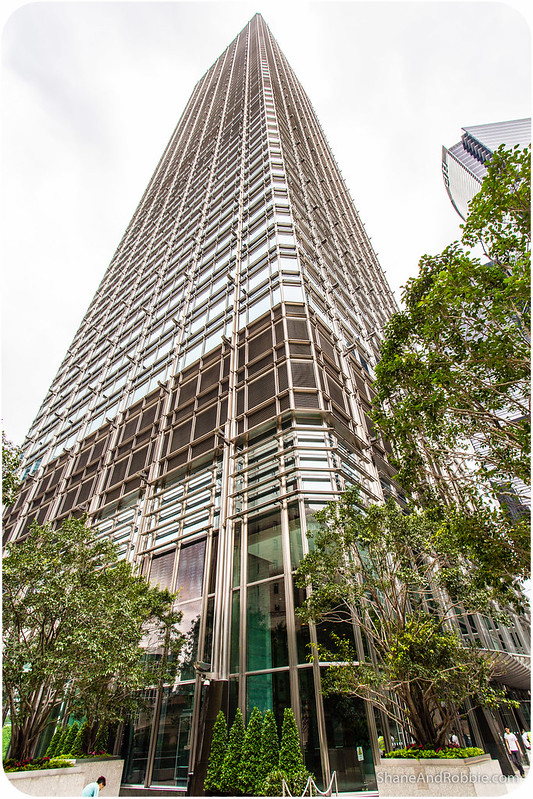 One of the bigger buildings was the HSBC Main Building (the headquarters of The Hongkong and Shanghai Banking Corporation). This shiny, metallic construction has an atrium you can visit where the unique characteristics of the building are explained to gawking tourists like us. Included in the list of impressive credentials were facts like this:
• The building has no internal support structures.
• Natural sunlight is the major source of lighting inside the building. There is a bank of giant mirrors at the top of the atrium which reflect sunlight into the atrium and into the offices around it..
• Instead of fresh water, sea water is used as coolant for the air-conditioning system. 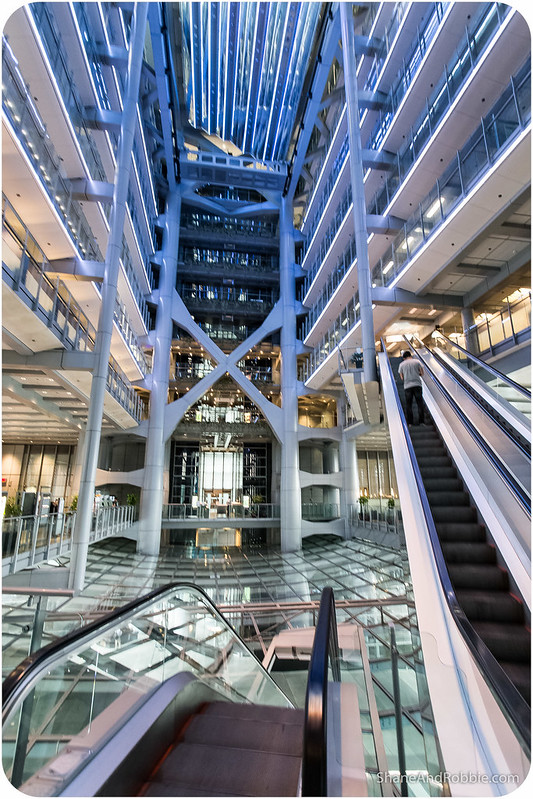 By this stage we were both dripping with sweat (due to the 38C + 90% humidity) and were keen for some respite. We caught the Mid-level Escalator* up to Hollywood Road and found an air conditioned café to chill out in (pardon the pun) for a bit before continuing our wanderings.
*The Central Mid-level escalator and walkway system is the longest outdoor covered escalator system in the world. The entire system goes for 800m and conveniently links parts of Central together that would otherwise require a lot of hiking up some very steep roads. 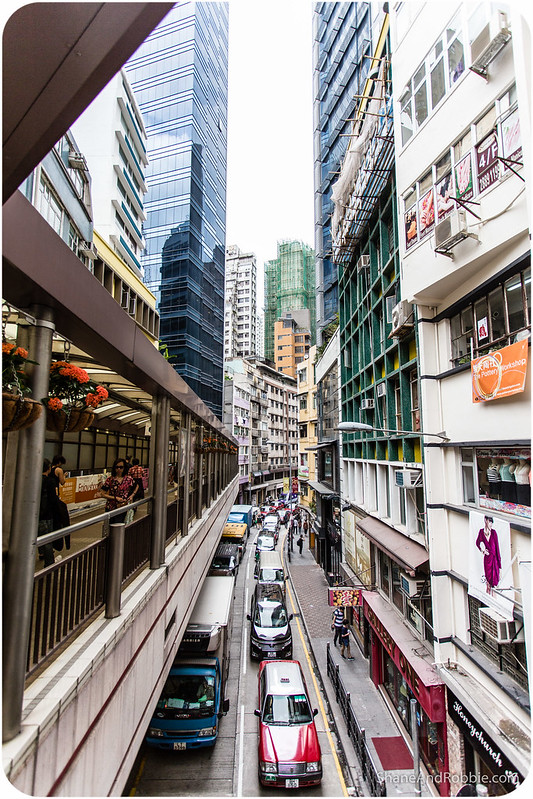 We walked along Hollywood Road for a while, stopping to admire the antique shops* lining the street. Unfortunately we’re not really in the market for a $25,000AUD Ming Dynasty porcelain vase, but it was still interesting to see what’s for sale. Some of the antique shops were jammed full of goods, with dust accumulating in the corners and all sorts of curios piled around each other.
*More than 100 years ago when it was first laid down, Hollywood Road was much closer to the coastline (since then Hong Kong has reclaimed a lot of land to extend its available land area). In those days, foreign merchants and sailors would put up the antiques and artefacts they “collected” from China for sale here on their way back to Europe. This is how Hollywood Road began its role as an antique market 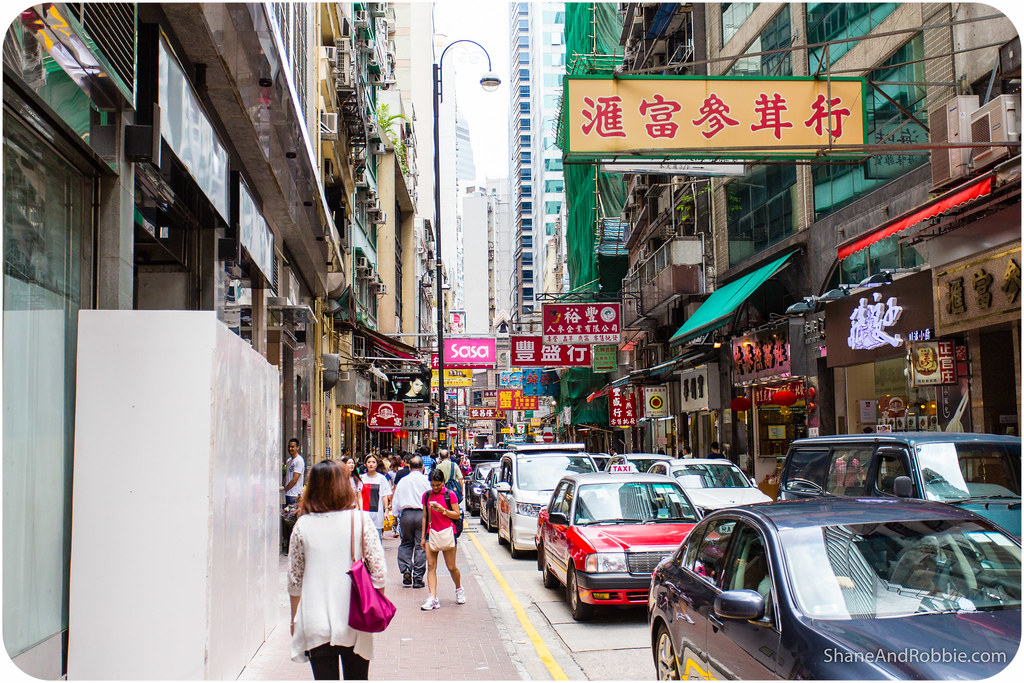 One of the highlights of our day was Man Mo Temple, which sits quietly amongst a confluence of modern apartment buildings on Hollywood Road. Built in 1847, this is the largest temple in Hong Kong dedicated to the gods of literature (Man) and war (Mo). The peace within the temple made for a nice contrast to the traffic noise and chaos just outside. 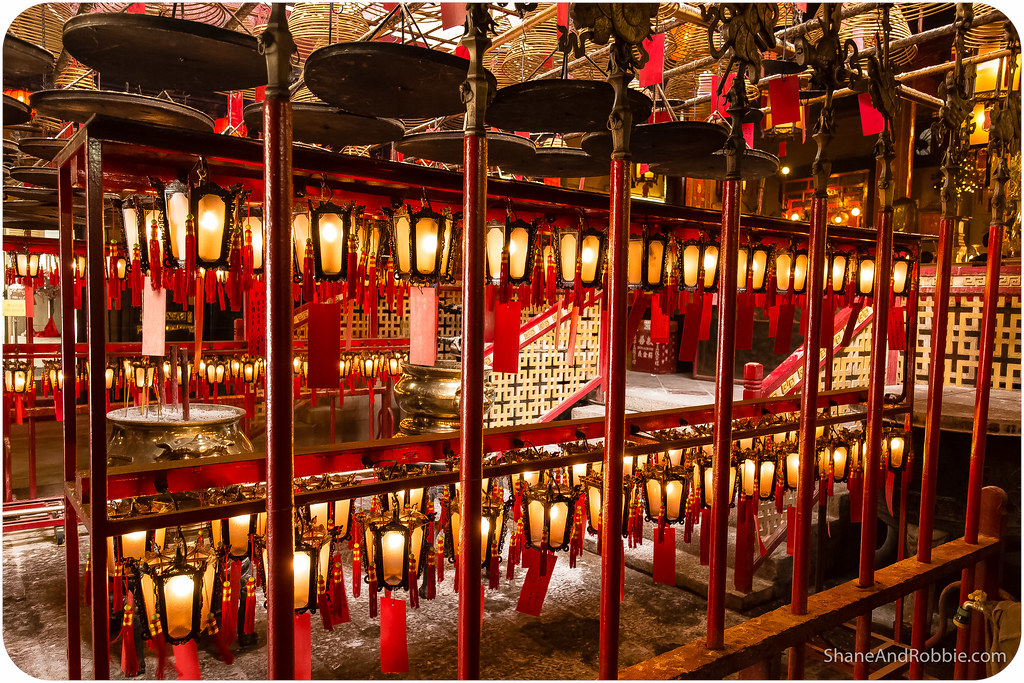 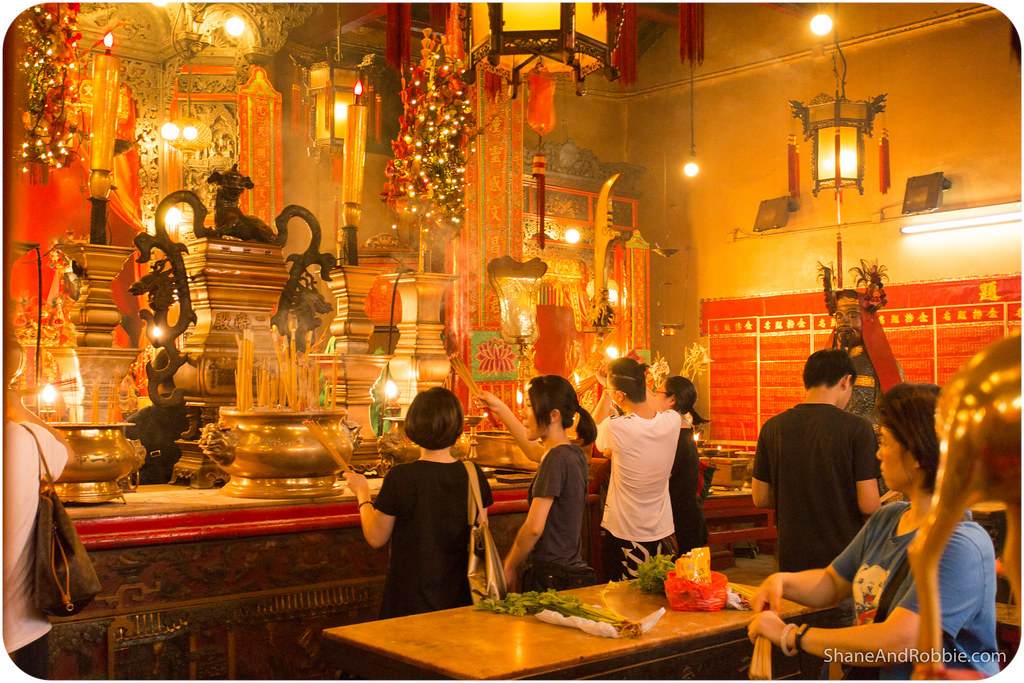 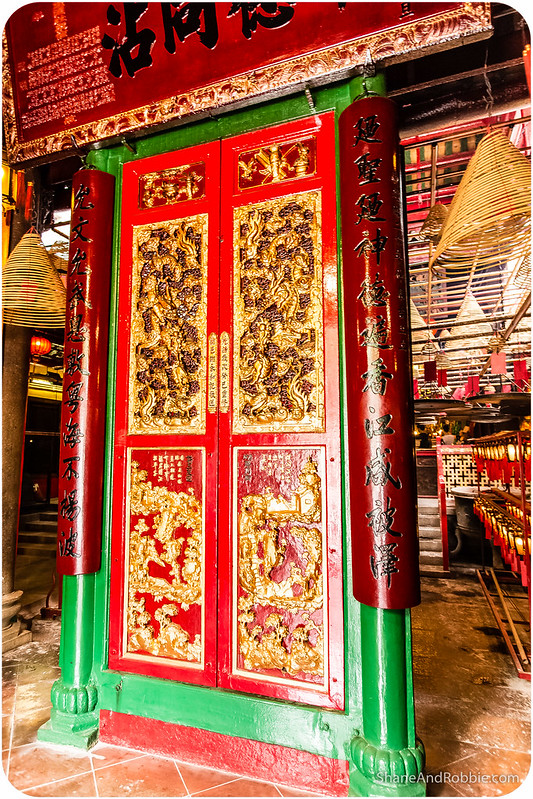 This area is very “Chinese” and we had a good time getting lost in the narrow lane ways looking at the curiosities for sale in the shops. These little streets were packed with shops selling all sorts of dried fruits, herbs and medicines, seafood and dried meats. We saw dried fish skins, dried mushrooms, dehydrated ginseng root, dried oysters, dried clams, desiccated sea cucumbers, and even dried lizards on a stick (not sure if these were for eating or for boiling into some kind of medicinal broth). 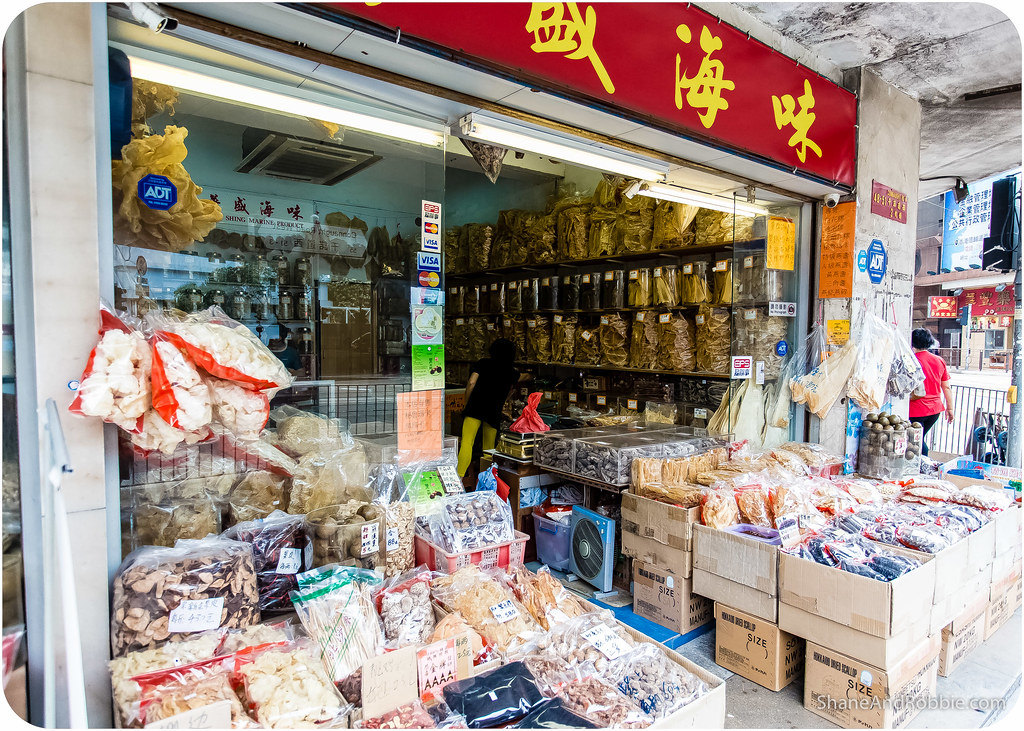 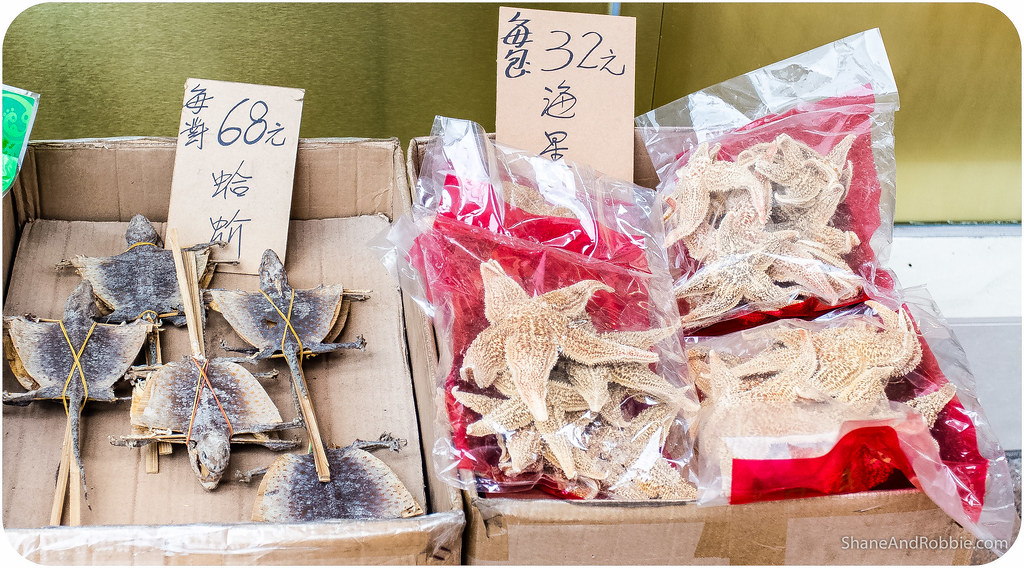 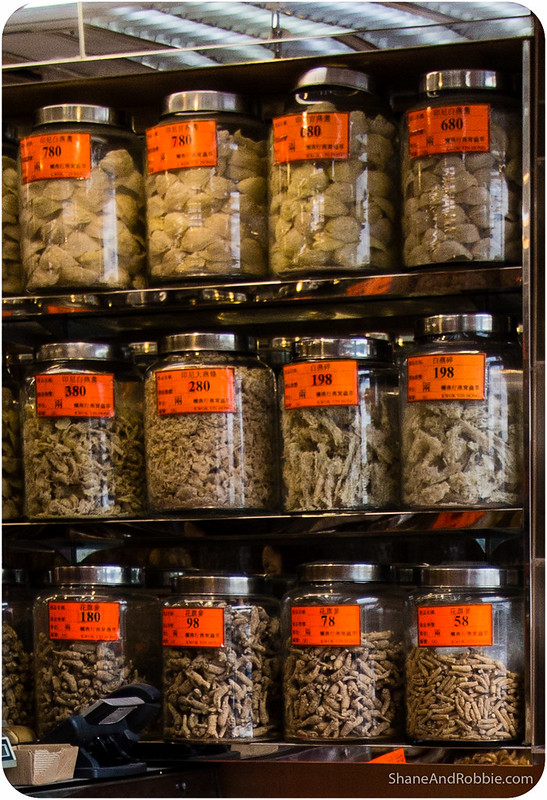 Thus, after a day of wandering the streets of Hong Kong Island, we’ve retreated to our air conditioned, gloriously silent hotel room for an afternoon nap and some recovery time. It’s been great to see some of Hong Kong, but what a day! So much noise! So much pushing and shoving*!

*We’re learning that queueing is a sport here, not an exercise in politeness and restraint like in Japan. One must claim one’s place and defend it by every possible means – elbows are especially useful. And never leave a gap between you and the person in front of you, otherwise this will be taken as an invitation for someone to slip in and fill said gap. The key is to be fearless!

We knew Hong Kong would a bit of a culture shock after Japan, but that’s part of the reason we’re here. Considering we’re heading to mainland China after this, we intentionally booked these few days in Hong Kong to help us adjust mentally and physically to being a foreign tourist in China. It always takes us at least a day or 2 to adjust to a new city, let alone a new country and new culture, but today has left us pretty worn out. Dare we venture out this evening to see this amazing metropolis by night? Depends how brave we’re feeling…. 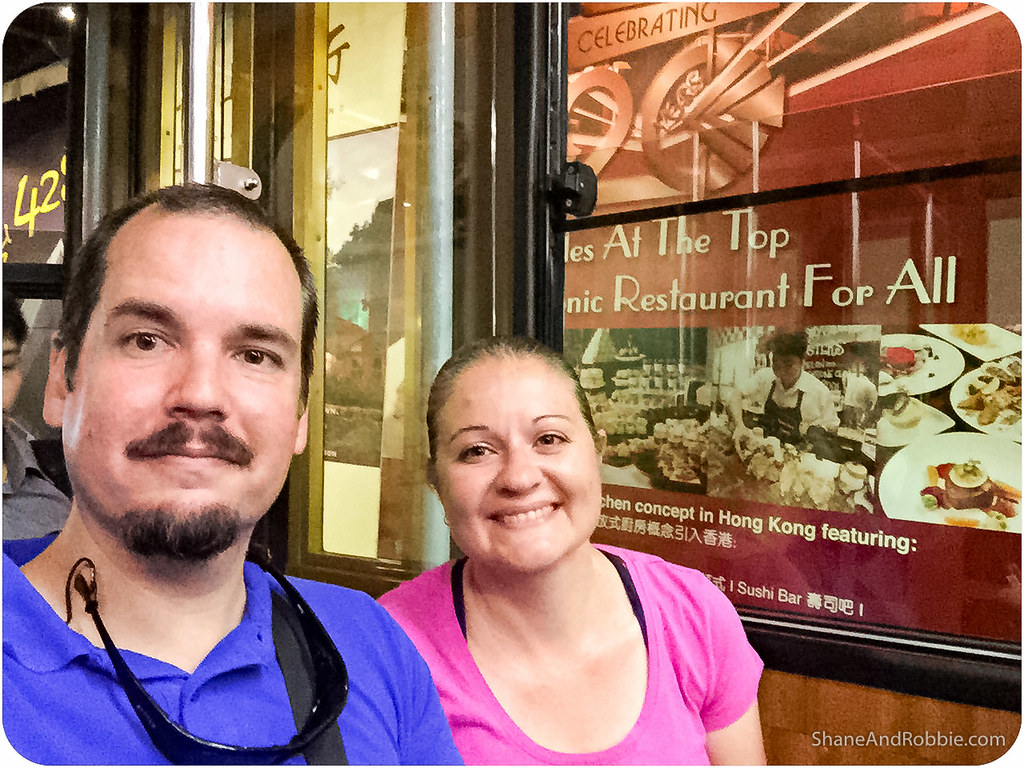 We did manage to head out after dark! We ended up going back up the Peak Tram to Victoria Peak for dinner and the best night time view ever. It had cooled down enough that it was almost pleasant and we got to enjoy a great meal overlooking the city and Victoria Harbour. Hong Kong by night is spectacular! So many lights – it was mesmerising. What a city! 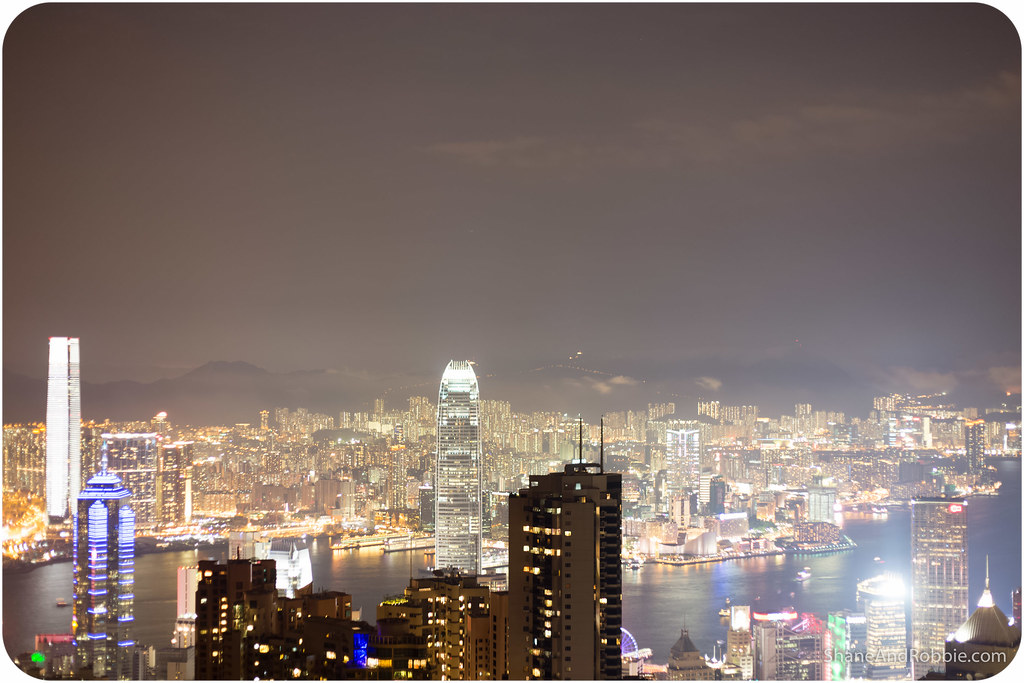