HAPPY MOTHER’S DAY FROM KOWLOON!
It’s Mother’s Day and, although we’re all the way over here in Hong Kong, we took the time today to think of our Mums – hope everyone out there did the same! Certainly Mother’s Day is a big deal here in Hong Kong; every brunch and yum cha place was packed with families and we saw lots of smiling ladies walking around with flowers. Seems love and respect of your birth-giver is universal! 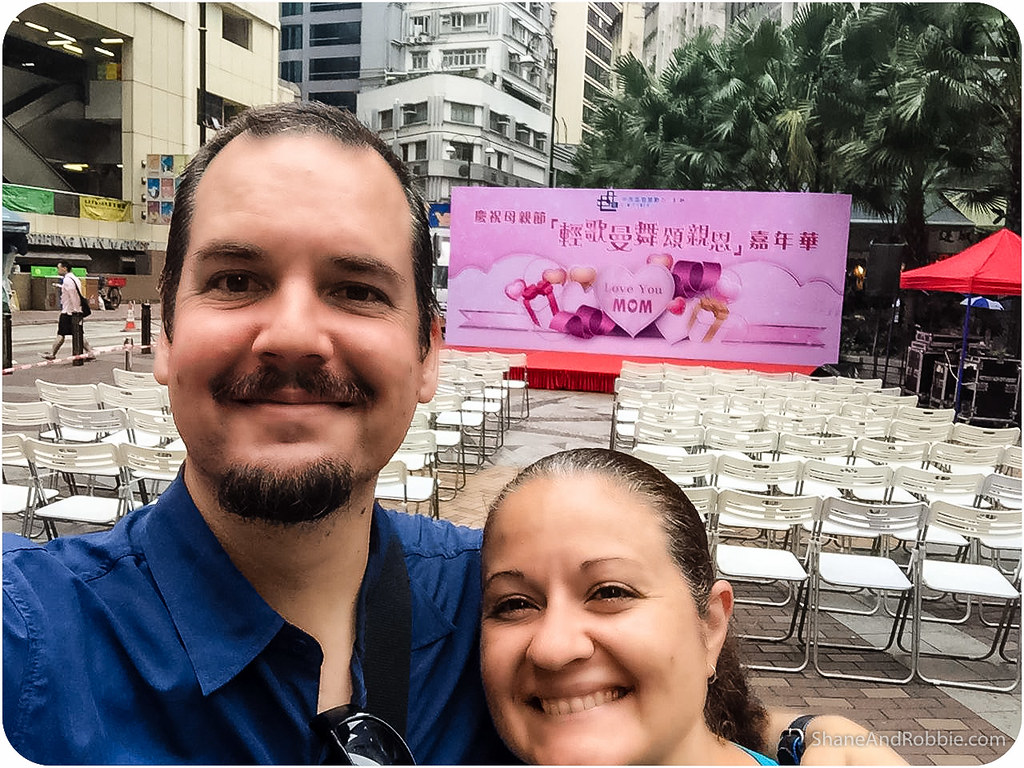 After seeing a bit of Hong Kong Island yesterday we decided to take ourselves over to the other side of Victoria Harbour today, to Kowloon. 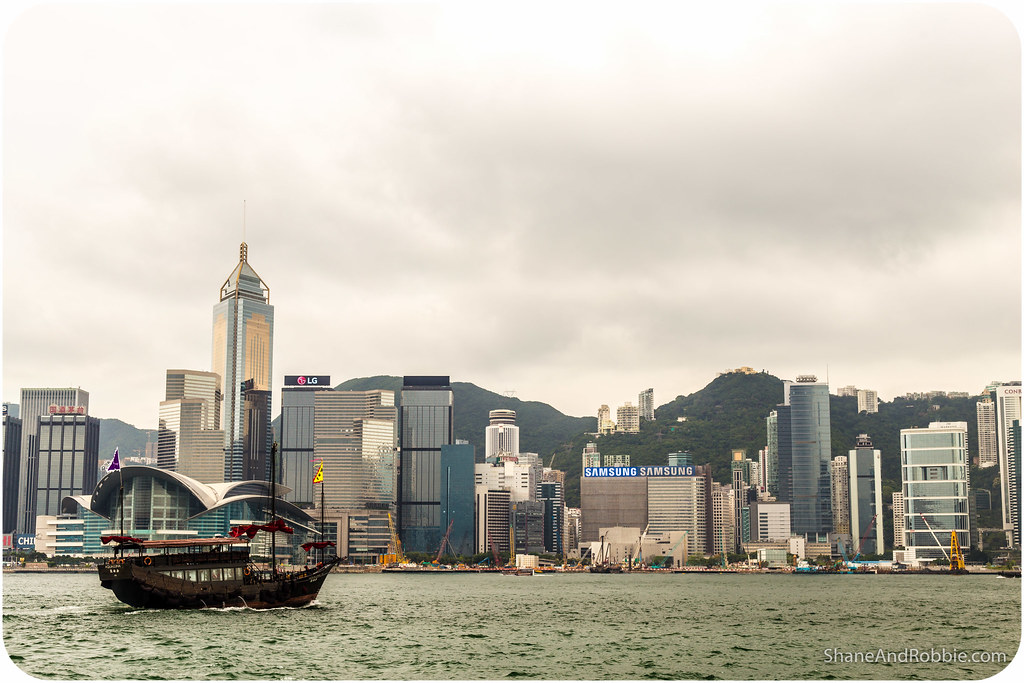 Historically Kowloon was the most densely populated part of Hong Kong, with refugees from mainland China congregating there and workers unable to afford the high rent prices on Hong Kong Island also living there. During the 1970s and 1980s, before China loosened its regulations around trading with the world, Kowloon was also where you could go to buy lots of cheap stuff that was made just across the border*.
*For years selling goods through vendors in Kowloon was a known, but not publicised, way for Chinese made products to be sold outside of China. This is how Hong Kong got its reputation as a good place to go shopping for cheap stuff. It’s still a great place for shopping, but with Chinese goods now available world-wide, shopping here does not hold the same allure it once did. 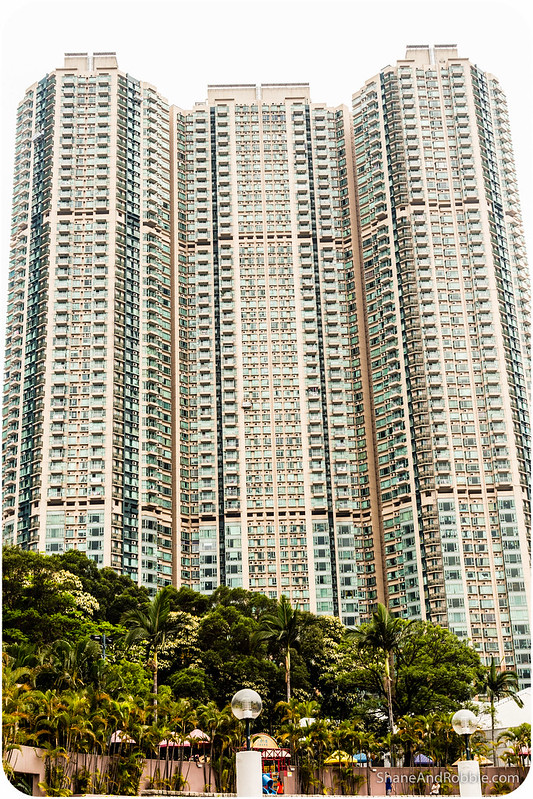 Modern Kowloon is still the city’s main shopping neighbourhood and is also home to lots one of Hong Kong’s mots famous tourist sights: The Avenue of Stars. This water-front promenade is modelled on the Hollywood Walk of Fame, and has the names and handprints of famous Hong Kong movie stars imbedded in the walkway. We love cheesy kung fu movies* and recognised a few names along the way.
*Kung fu movies are the best known product of the Hong Kong film industry – for decades it was the third largest film industry in the world (after Hollywood and Bollywood). The political and artistic freedom Hong Kong had under British rule allowed movies to be made and distributed without issue. Although the success of the local film industry has waned in recent years, HongKongers are still very proud of their cinema legacy. 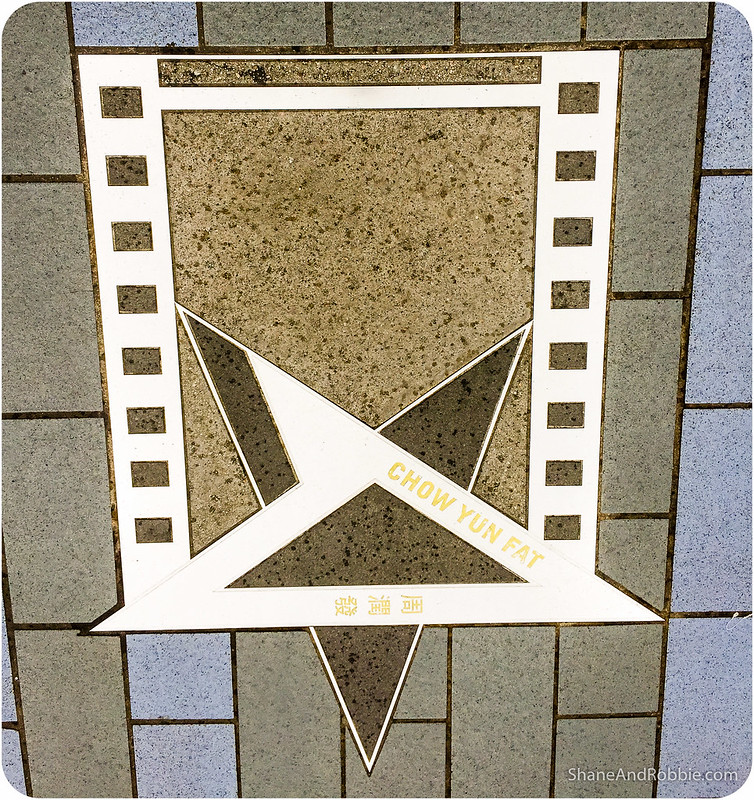 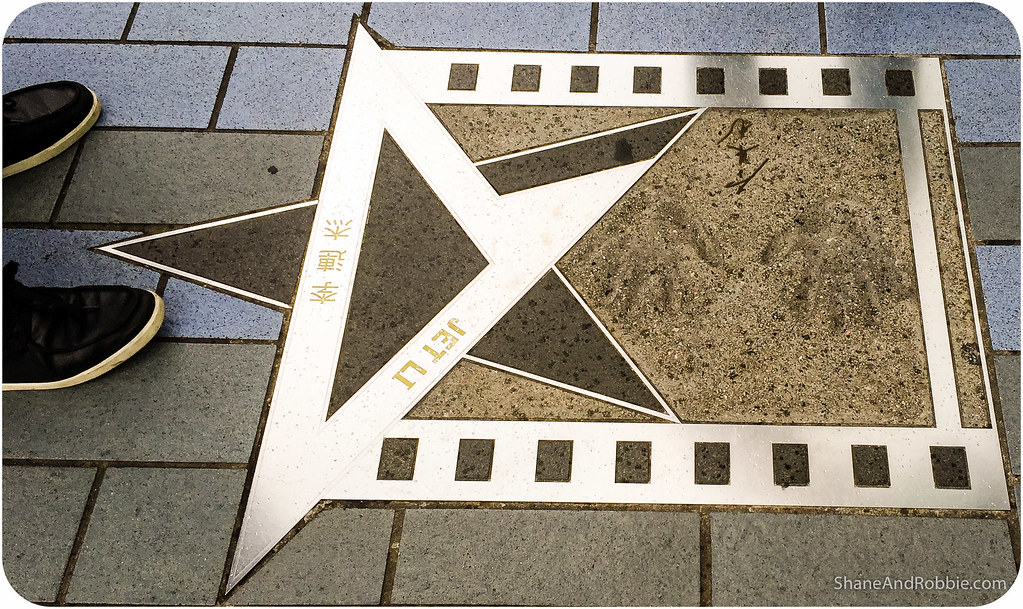 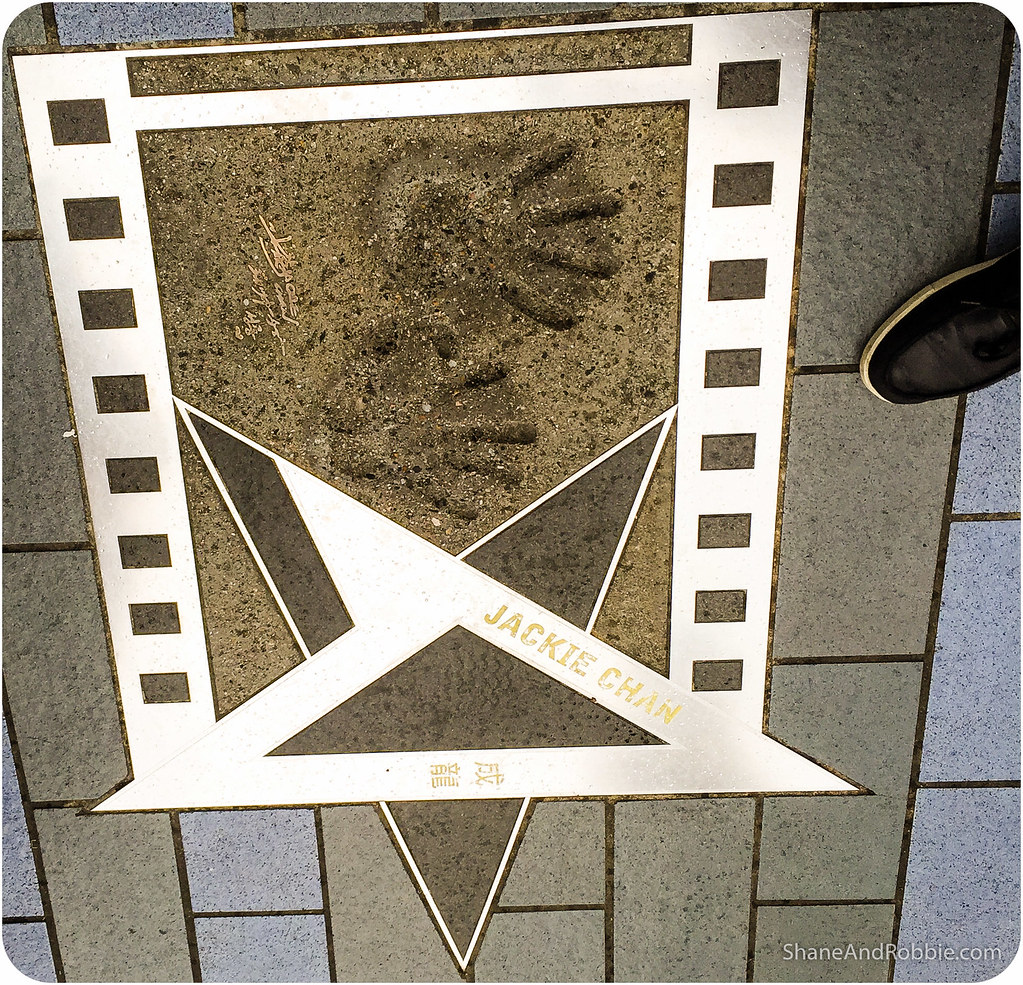 And if course, who wouldn’t recognise this statue of Hong Kong’s most famous kung fu master… 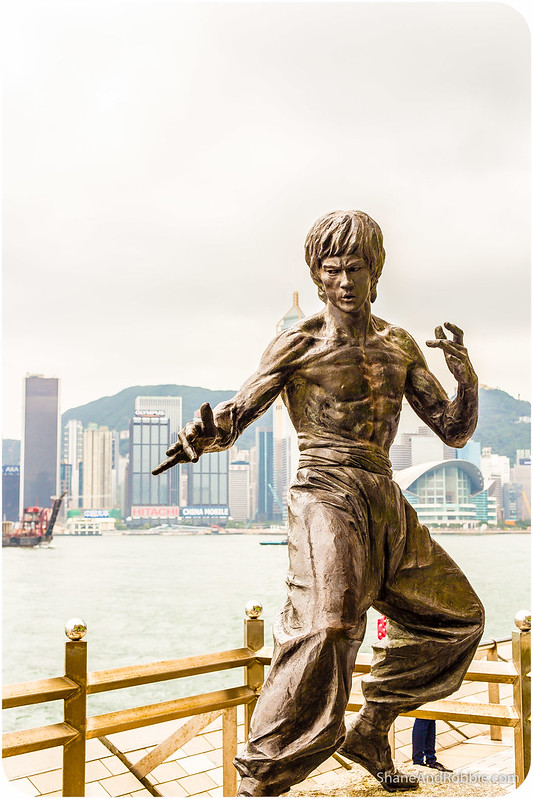 The best thing about The Avenue of Stars though was the view we got to enjoy across the harbour. It must be stunning at night when all the lights of Hong Kong Island are shining! 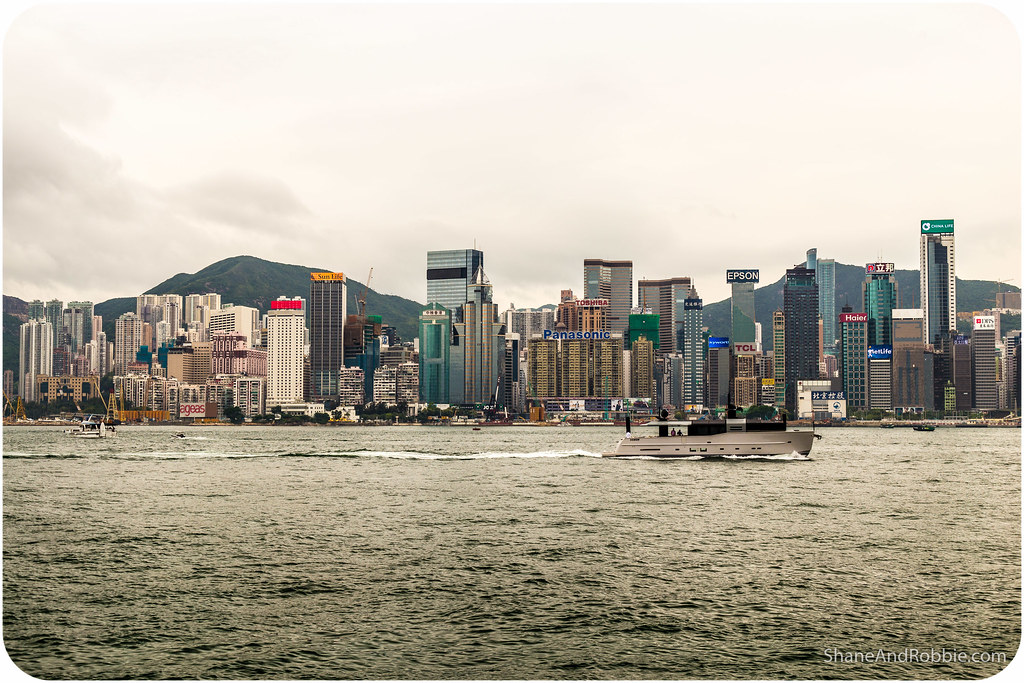 From the waterfront of Kowloon we wandered up Nathan Road, the main thoroughfare in Kowloon and home to more luxury boutiques, shopping malls, and shops than we’ve ever seen. There were some very fancy shops in there (shops we would NOT have been allowed to walk into in our scruffy travel gear), but a whole lot of small shops and grimy-looking alleys filled with stores too. We saw every kind of shop imaginable – from clothing stores, jewellers, designer handbag shops, pharmacies filled with Chinese herbs, and everything else in between. More than once we were approached by touters on the street offering to sell us “genuine fake” handbags, watches, or clothing. We could have had a dozen tailored suits made if we’d taken all the suit-sellers up on their offers, and hand-made shoes were on offer too. Pity we’re on a strict luggage weight limit…. 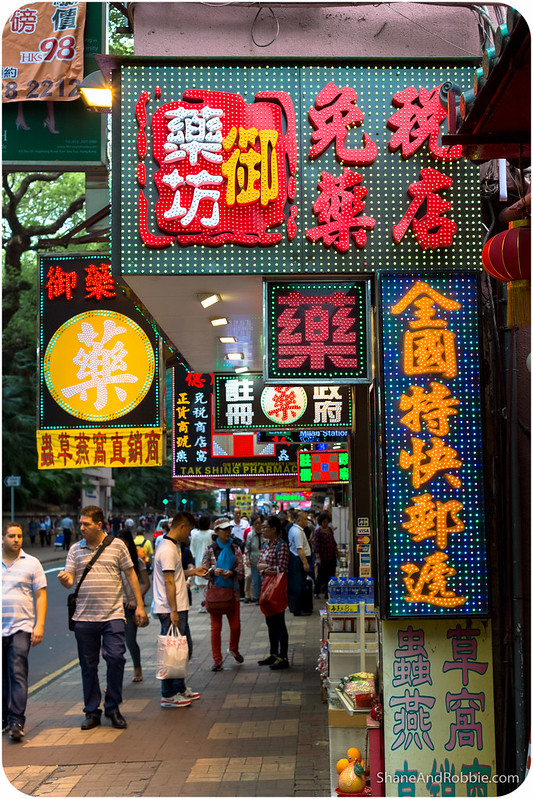 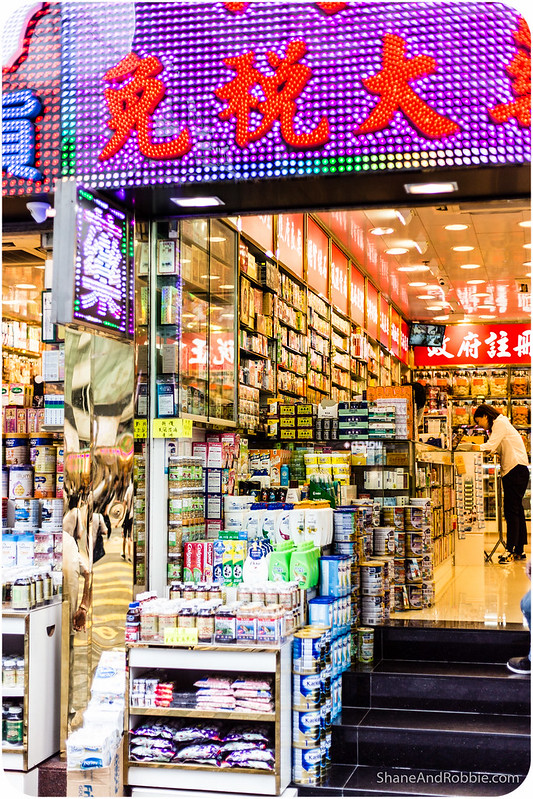 We squandered hours just wandering through malls and laneways, with hunger and heat exhaustion eventually driving us into a likely looking (and air conditioned) yum cha* restaurant for lunch. The whole place was packed (always a good sign) and we had to wait a while for a table, but it was totally worth it. The steamed chicken and chive dumplings were awesome, and the prawn dumplings divine. Dim sum# is one of our favourite ways to eat and turns out Hong Kong dim sum on Nathan Road rocks!
*Yum cha means “to drink tea” in Cantonese and is a way of dining that involves eating a selection of small dishes that are accompanied by green tea.
#Dim sum is the term for the food you eat at yum cha. Basically dim sum are small, bite-sized portions of food, served hot or cold, and designed to be shared. Dumplings are our favourite kind of dim sum, but wontons, soup, stir fried veggies, fried rice, steamed pork buns, chicken feet, custard tarts, and tapioca pudding all featured on the menu today too. 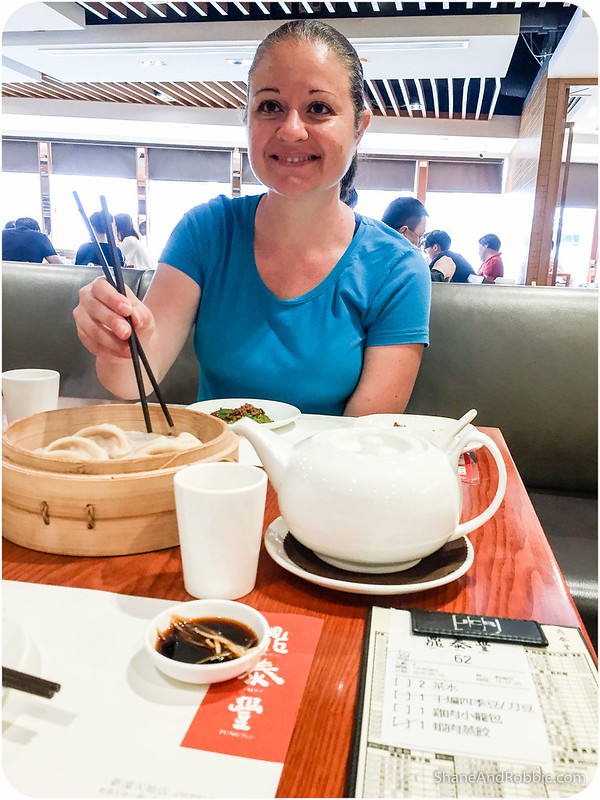 We ate way too much and went for a very sedate stroll through Kowloon Park to aid the digestive process. This large public garden was a nice place to wander and people watch. There were families enjoying picnics in the park, kids swimming in the public pool, and people practicing kung fu and tai chi. They even had flamingos in the park! 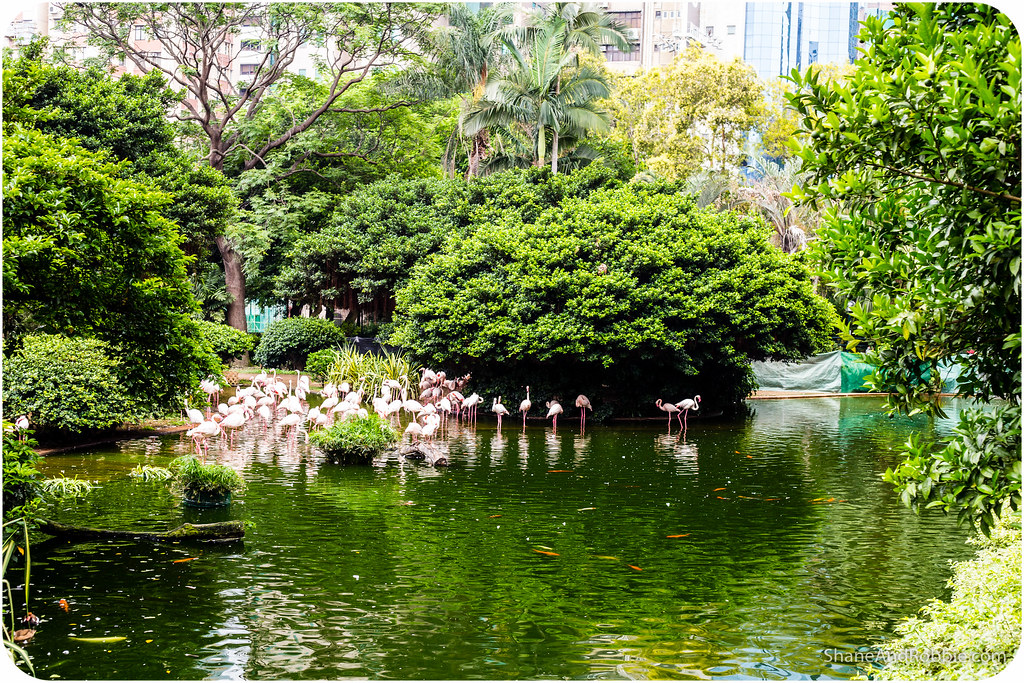 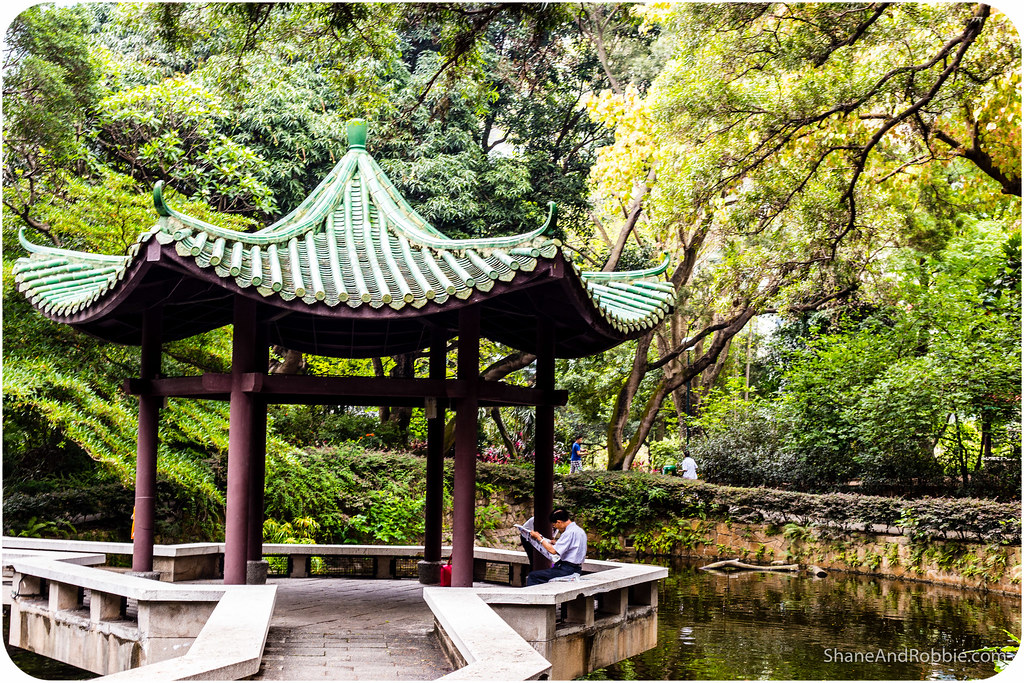 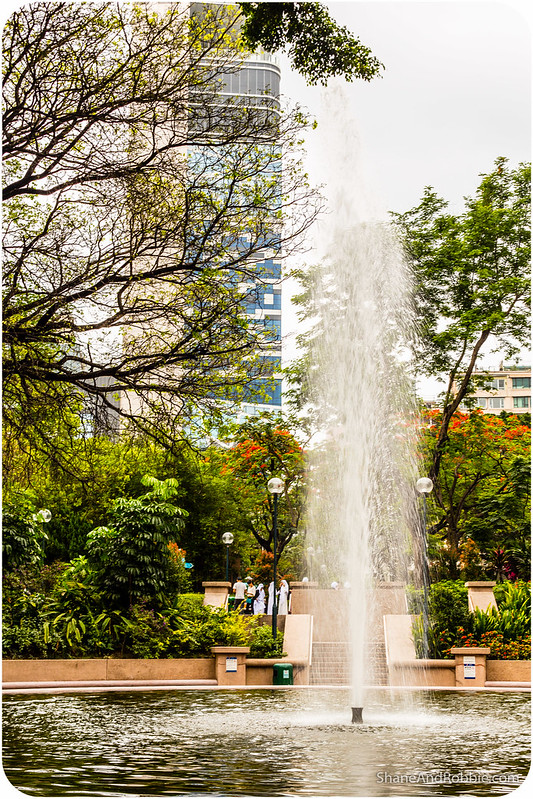 The funniest thing we saw in the park was The Avenue of Comic Stars, which features a whole lot of statues of local comic book and cartoon characters. None of them were familiar to us, but there were some pretty funny ones in the mix. 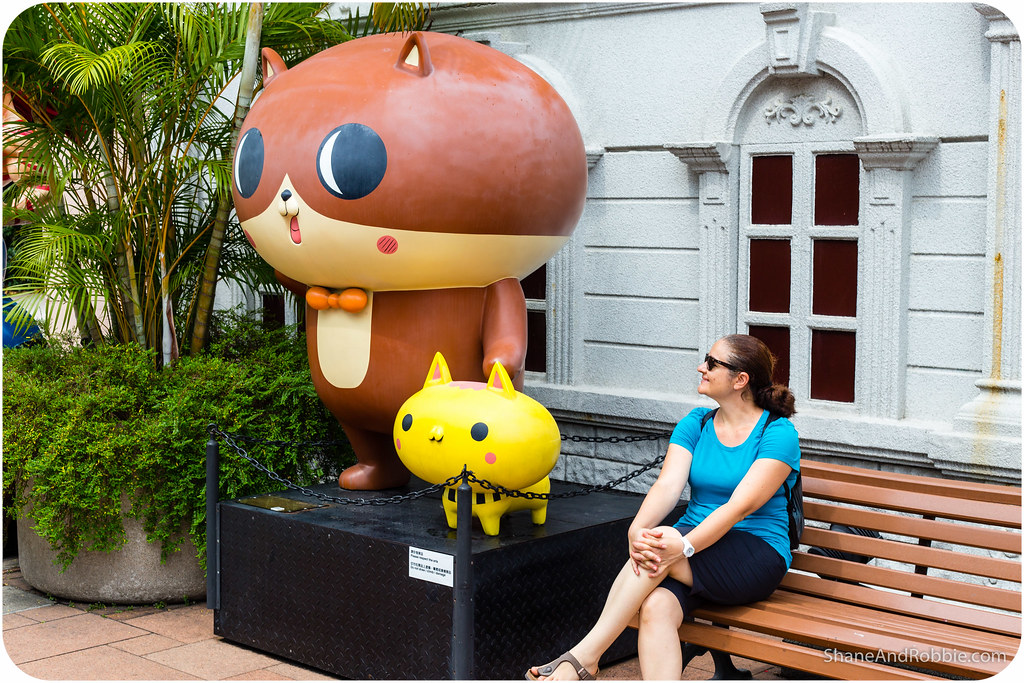 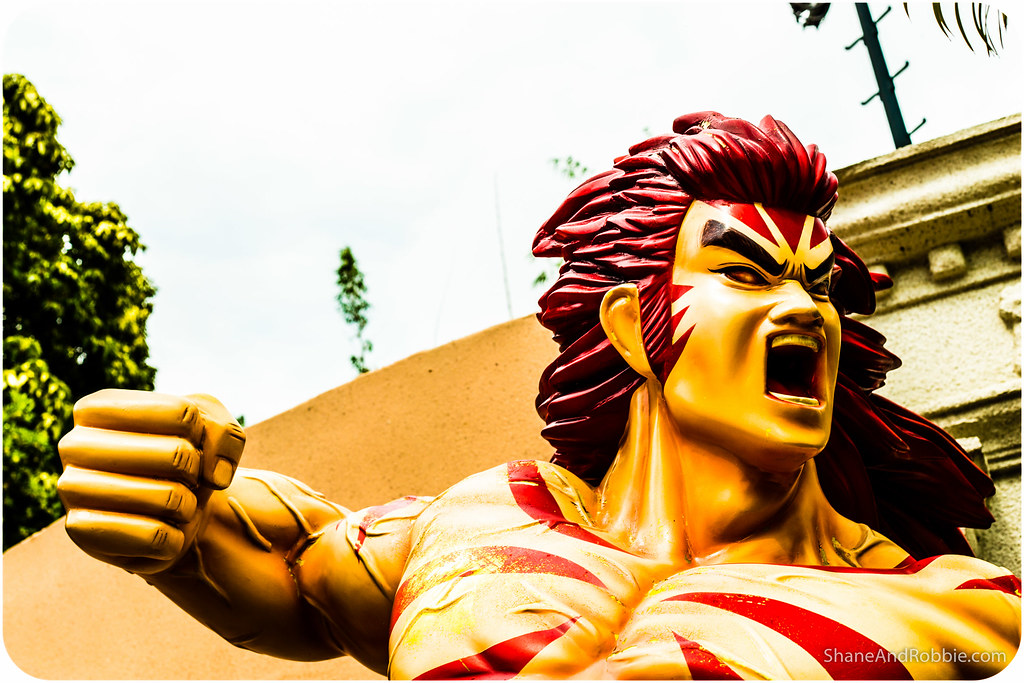 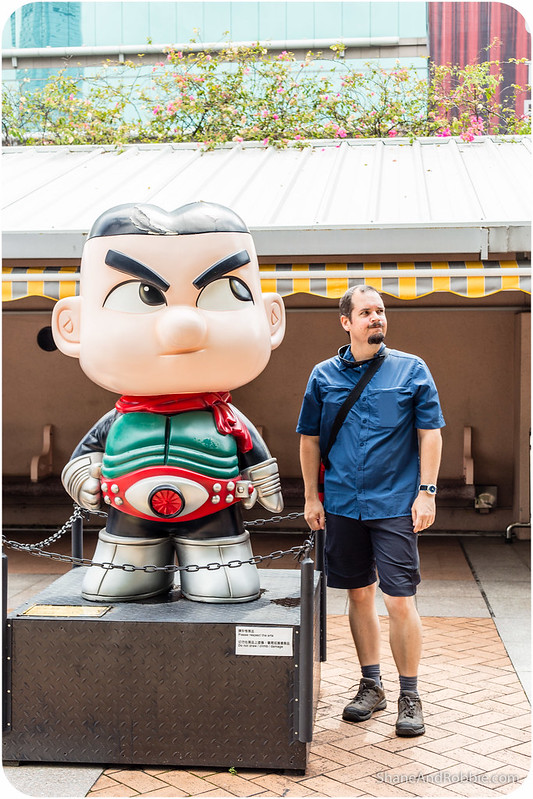 Having worked off our lunch we then caught the metro back across to Hong Kong Island and enjoyed our afternoon nap in our air conditioned room (love being on holiday!). Properly rested we then headed out for dinner and some more adventuring in Kowloon, this time at the Temple Street Night Markets. 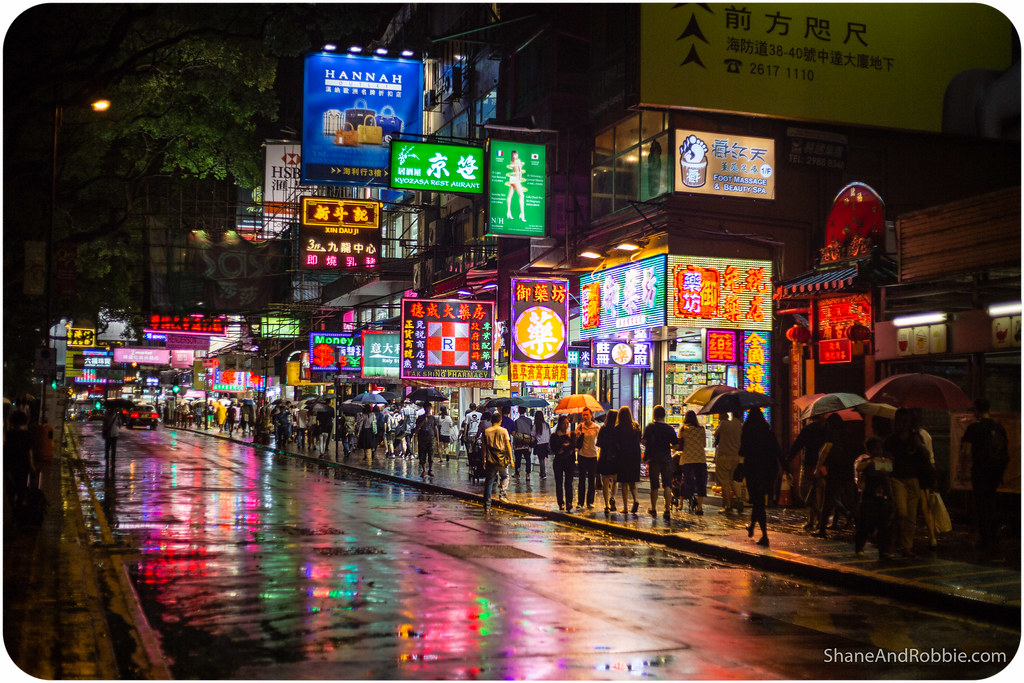 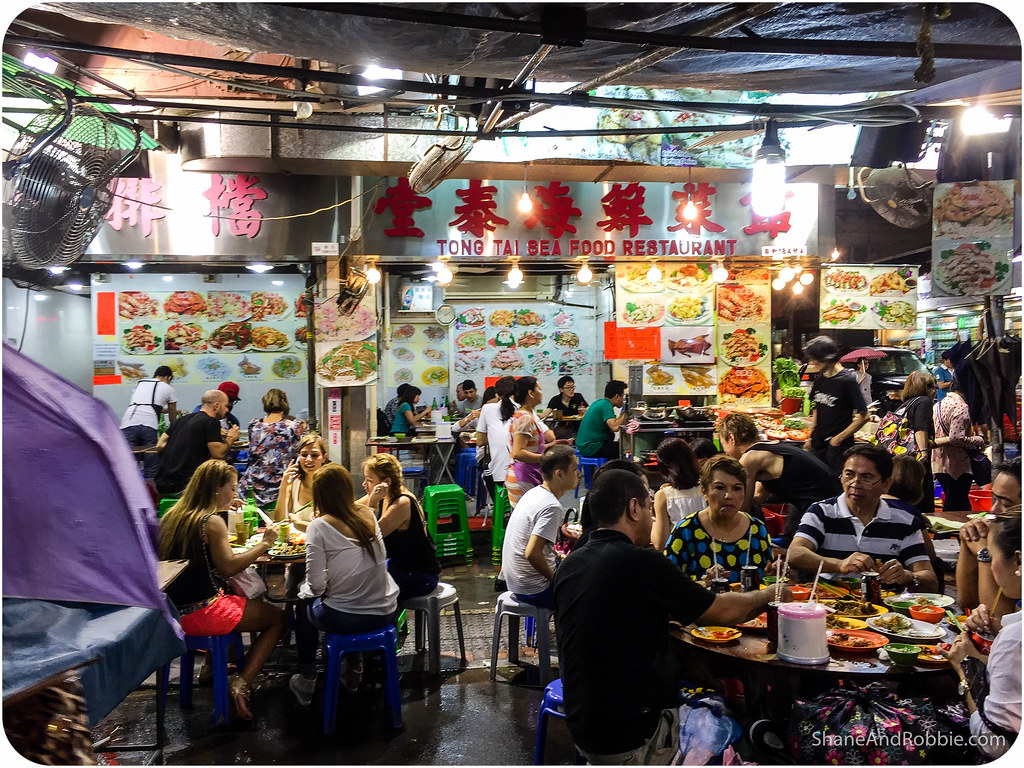 The Temple Street Night Markets were a riot of colour, noise, and smells, with everything from food to mobile phones, watches, shoes, clothing, bags, lighters, sunglasses, hair accessories, toys, and condoms for sale. Everything was cheap and of excellent quality, or so we kept getting told. It was great fun checking out all the stalls and, even though we didn’t make any purchases, our evening spent at the Temple Street Market was certainly entertaining! 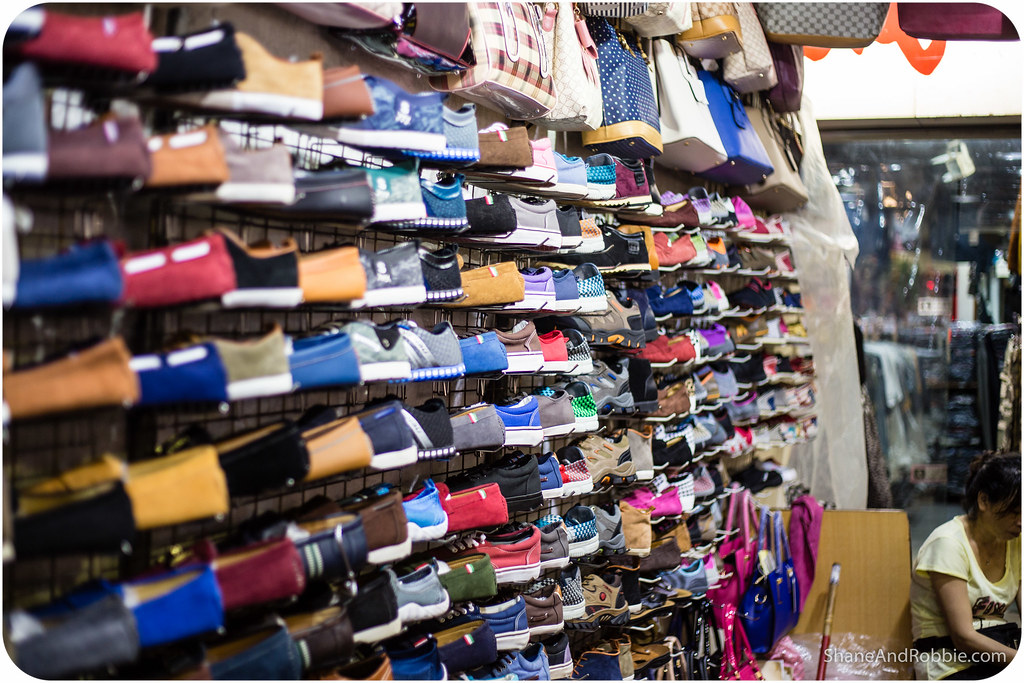 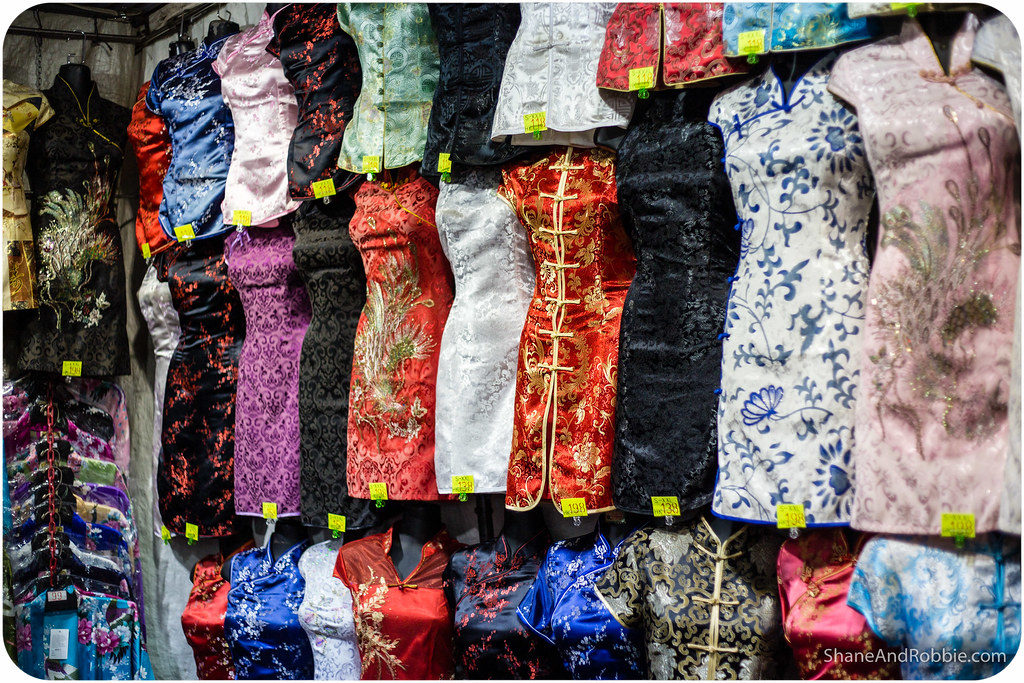 And thus ends our Sunday in Hong Kong. It’s been a great couple of days, and we’ve just found out that there’s a festival on tomorrow. We love festivals! We just have to work out exactly where and when the festivities are happening so we can go check it out. Tune in tomorrow to see what a Hong Kong festival day looks like… 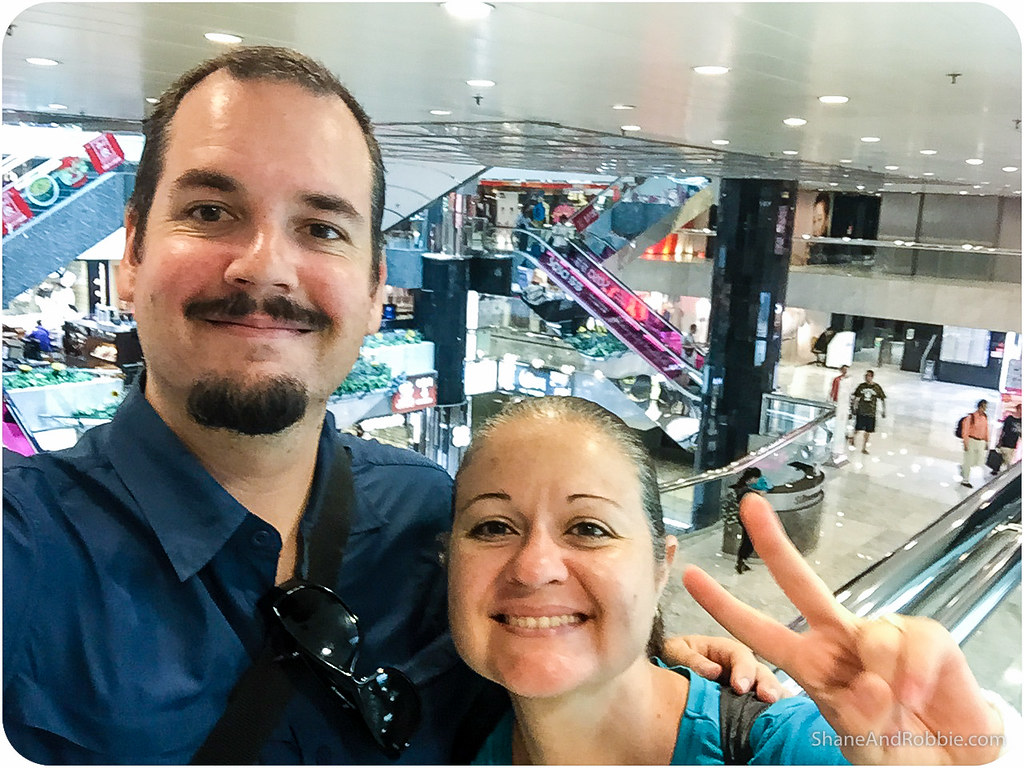