TIGER LEAPING GORGE
Tiger Leaping Gorge is definitely one of the highlights of our trip so far! We drove 2 hours to get there, through tiny villages along bumpy roads, and then got to hike along the gorge for a few hours before heading home again. The looming cliff faces, towering 4km above us, made us feel very small; as did the Yangtze River, rushing through the canyon below us. 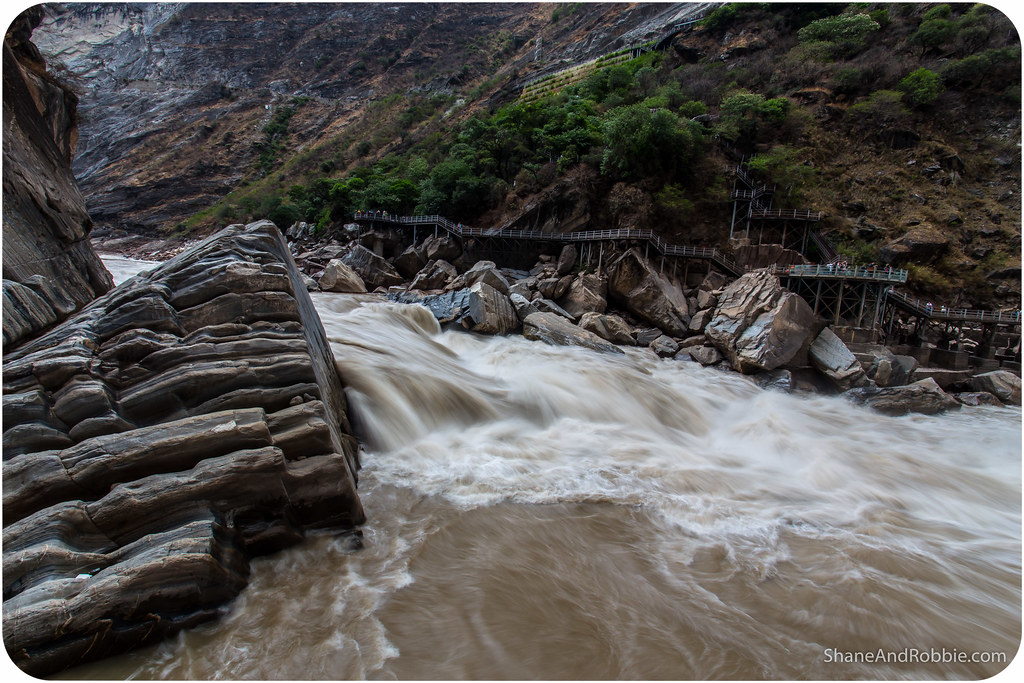 We woke this morning tired and cranky thanks to the construction crew that decided they needed to tip a truck full of stones out onto the road just outside our window at 1:00am last night. They then proceeded to start working, happily yelling at each other at the volume that Chinese people seem to think passes for “quiet”. Shane stuck his head out the window and yelled at them; despite the language barrier they seemed to understand what the angry, sleepy white guys was saying and shut up (they continued working, mind you, just stopped shouting at each other).

We’ve actually had to come to terms with the fact that China is a noisy country. Just generally out in the streets, at restaurants, and in every public place we’ve been, the Chines people we’ve crossed paths with have been soooooo noisy. Maybe that’s the only way to be heard in a society this busy and crowded?!

Even without the construction work it’s noisy in hotels here too – we’ve often had Chinese families occupying 2-3 rooms around us (one for Mum and Dad, one for the kids, and one for the grandparents), and leave their doors open and yell at each other across the corridor. Or even better, walk from room to another slamming doors every time. It’s like they have a completely different concept of what respectful public noise levels are! Basically ear plugs are a must if you want to sleep whilst in China.

A couple of strong coffees at breakfast (God bless Yunnan coffee!) and we were set for the day however. The drive up to Tiger Leaping Gorge was fascinating – the further out of Lijiang city we got, the further back in time we went. The road to the part of Tiger Leaping Gorge we went to hasn’t been upgraded so there weren’t many other tourists heading our way, which was lovely. Even when we got to the gorge we virtually had the place to ourselves. 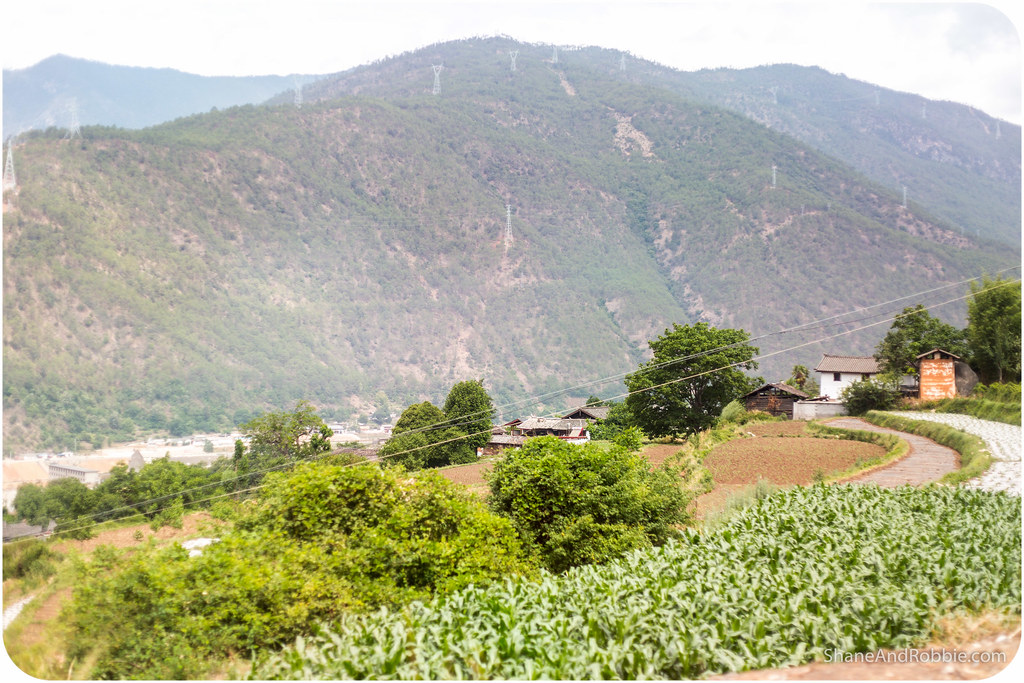 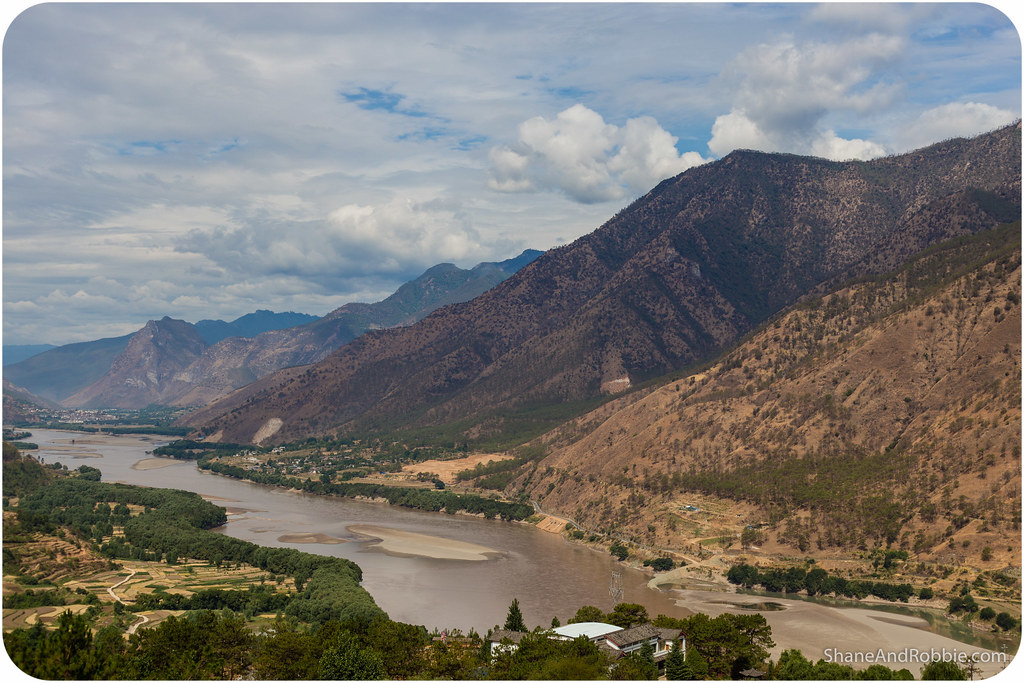 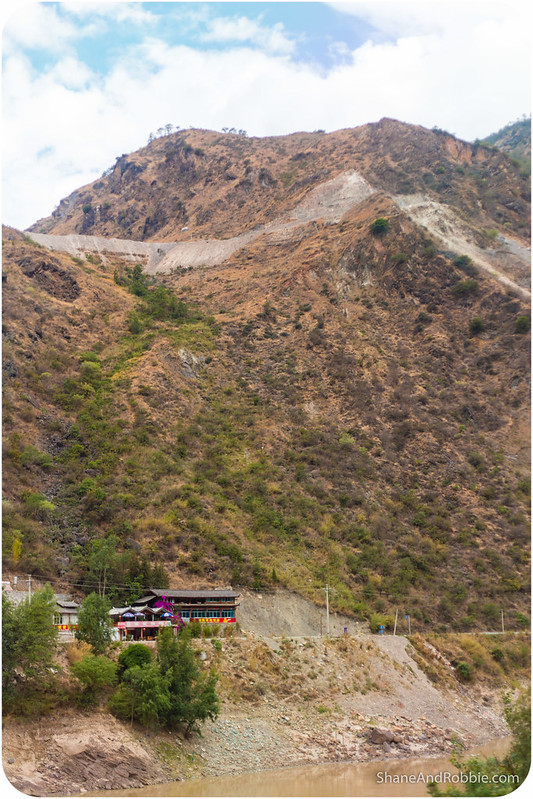 Around 15km in length, Tiger Leaping Gorge is the world’s deepest gorge. It formed over millennia as the Yangtze River carved its way through the rugged landscape between Jade Dragon Snow Mountain (5,596m) to the east and Haba Mountain (5,396m) to the west. 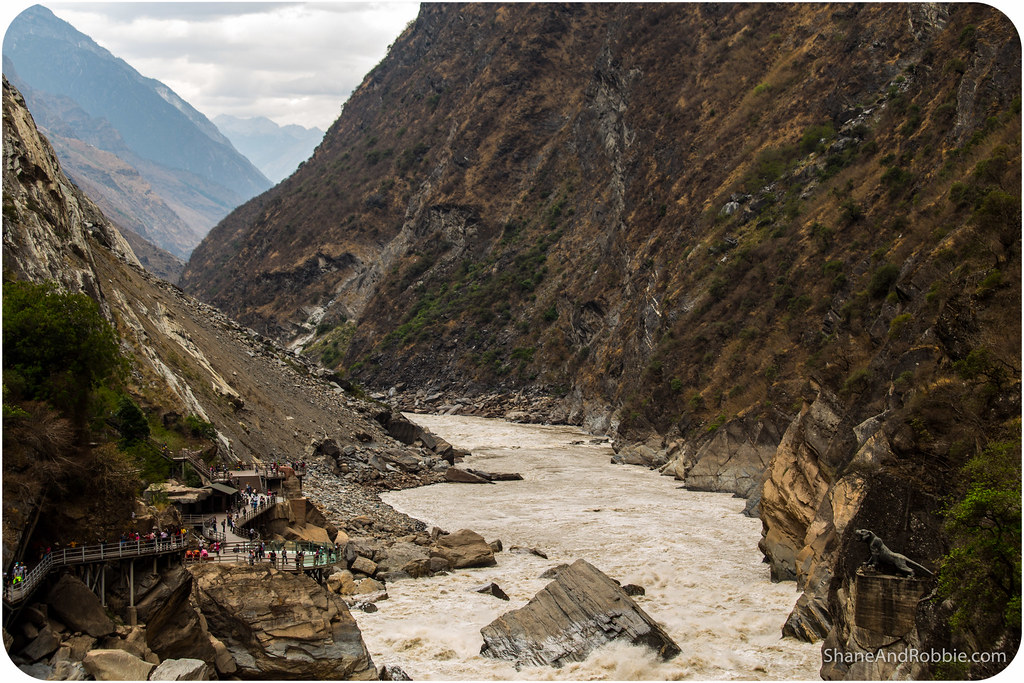 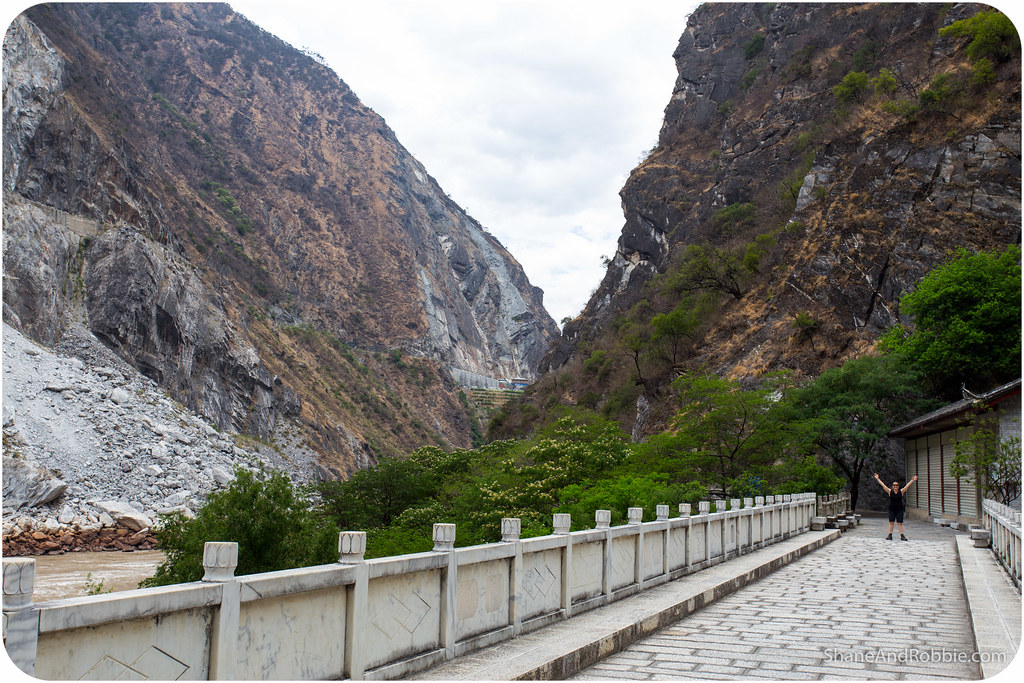 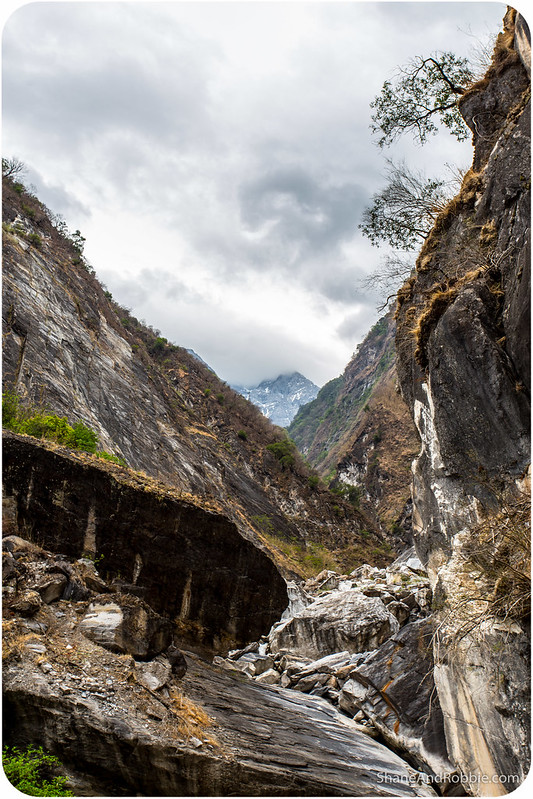 Legend says that in order to escape from a hunter, a tiger jumped across the river at the narrowest point, hence the name*.
*We’ve mentioned this before, but man the names of things here are descriptive and poetic and cool. Why can’t we have names like that at home for places? Like “Sleeping Wombat Mountain”, “Hungry Dingo Billabong”, or “Dead Kangaroo Gully”? So much more interesting than naming things after some famous dead person! 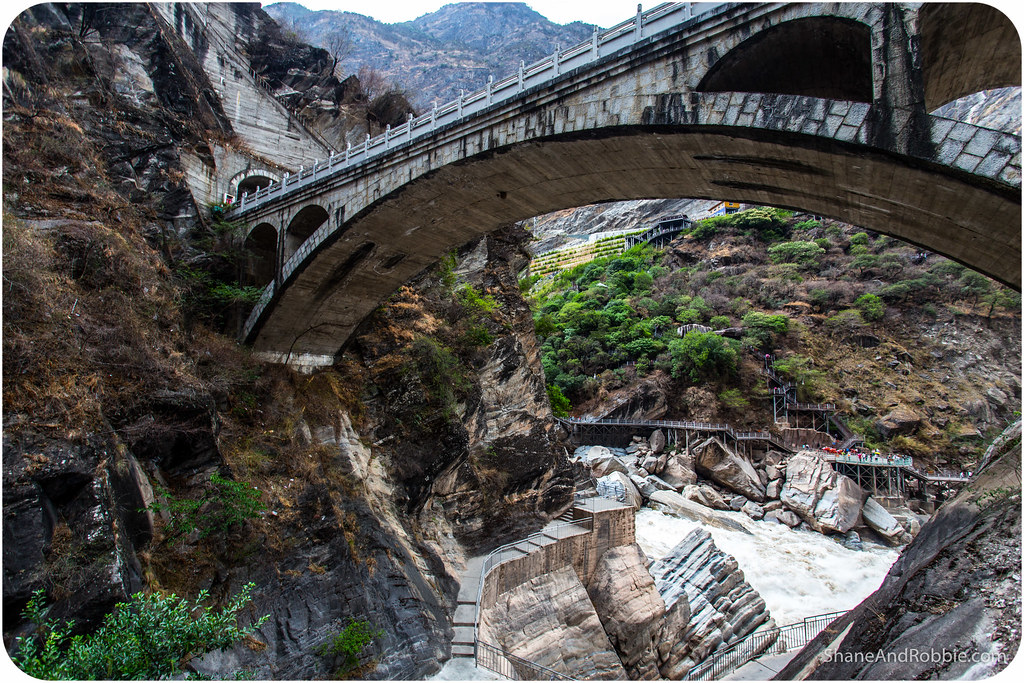 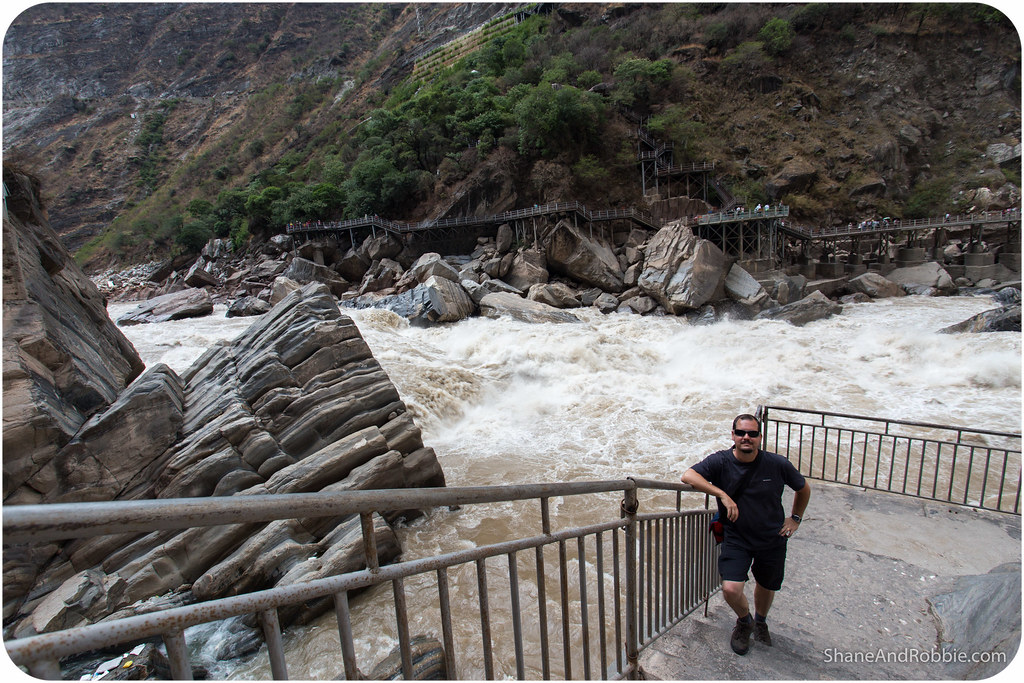 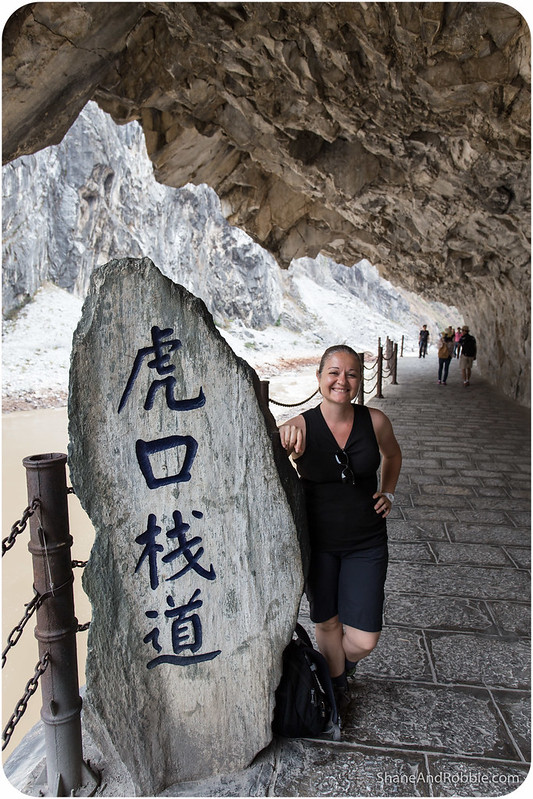 There are a number of hiking trails through the gorge, including a 2 day hike that runs along the high part of the gorge. Unfortunately we don’t have the time on this trip to do THAT hike, and so settled for one of the shorter walks that runs along the cliffs on the east side of the gorge. It was quite cloudy today which we were really grateful for – hiking through the dry stone gorge with full summer sun beating down on us would have made it even hotter than it was! 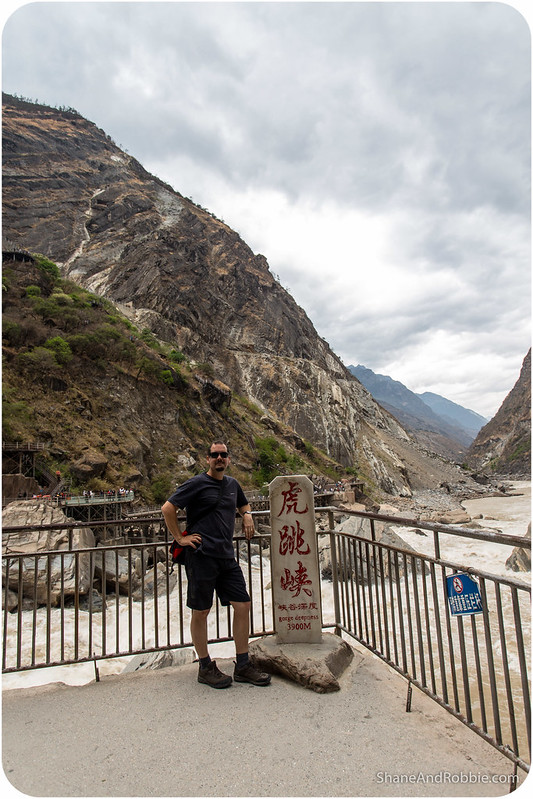 At one point we were diverted through a tunnel, blasted out of the mountain just recently after a rock-slide closed the main walking path. 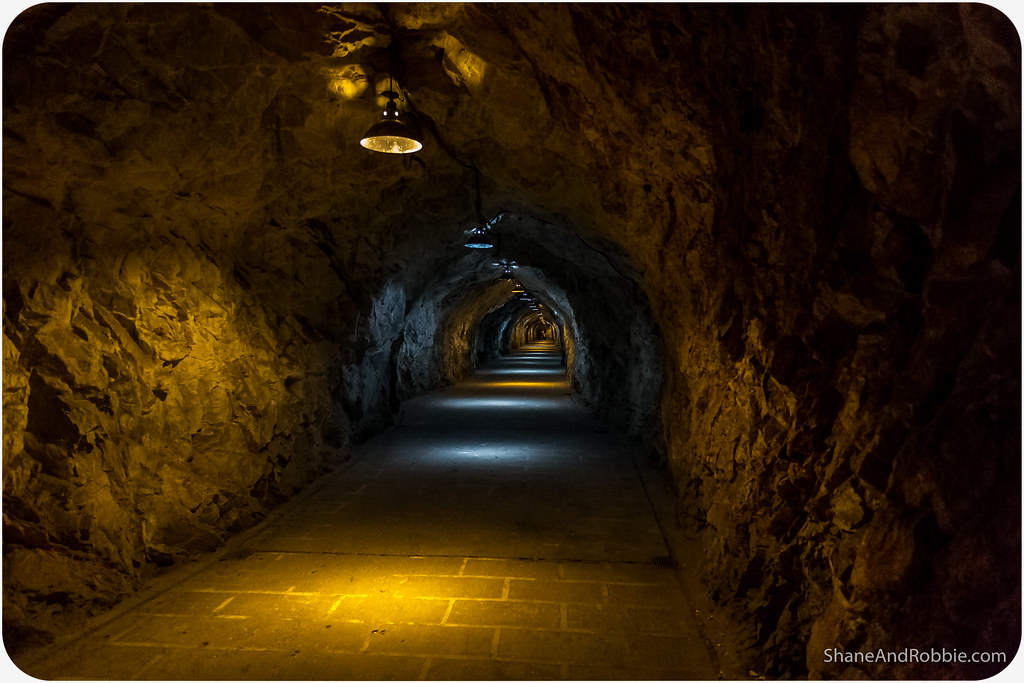 The terminus of the path we followed was the narrowest part of the gorge, where the Yangtze became a terrifying raging torrent and where the legendary tiger supposedly leapt across to save himself from a hunter.

As terrifying as the river was, however, the toilet stop on the way back was far scarier. Chinese toilets really are the pits (pardon the pun). We came across some pretty average crappers in Egypt, Tanzania and Turkey, but Chinese toilets are a thing unto themselves. Private ensuite toilets in hotels are fine (ah sweet sanctuary!), but virtually all the public toilets we’ve had the (dis)pleasure of using are quite something. Our observations so far:
• Squat toilets are the rule here. Not a problem for us – we’ve mastered the deep squat, whilst ensuring you don’t pee on your shoes or into your pants. The issue here is we’ve come across a few loos that are just a tiled trench with no partitions to separate you from your new friends. And being white, we’re quite a novelty in some of these provincial areas, so people LOVE to watch us use the facilities. Coming from an uptight, privacy-obsessed Western culture, this is more than a little disconcerting.
• Not many places have flushing toilets. This means you have to go fetch some water out of the pail and wash your leavings away. Again, not a bad system if you don’t have running water plumbed. But not a great system when the 3 people before you (one who seemed to really enjoy curry), haven’t had the courtesy to use the afore-mentioned pail.
• The floors inside the cubicles are often soaking wet. One assumes this liquid is water that perhaps fell out of the pail accidentally, but the colour and smell would indicate otherwise. A lot of people seem to have pretty bad aim.
• In reference to the point above: ALWAYS wear closed shoes if you’re going to have to use a public loo at some stage. I made the mistake of wearing sandals on one of our outings and have had to burn said footwear due to the horrors.
• They don’t supply the loo paper. Bring your own or suffer the consequences.
• In the West we like our loos to smell like anything but what they are – we layer sweet floral fragrances on top of citrus and bleach to hide the smell of pee and poop. Here the odours are like a floating advertisement. We haven’t had to worry about figuring out where the public toilets are yet – just follow your nose!
• The drainage systems to take away the sewage from toilets is not modernised in most places we’ve been; and so, like in many developing countries, you have to place your used tissues into a wastebasket. Not a problem unless it’s hot, humid and the basket hasn’t been emptied for a while. Sweet Jesus – the stench!
• Finally, should you actually find a Western style toilet for your convenience, be warned that it is likely to be in a horrendous state. It seems Chinese people believe that if you sit on a toilet seat, you will come in contact with germs that could make you ill. So they prefer the squat-style toilet, where your skin does not come in contact with the toilet whatsoever. Unfortunately it seems when a Chinese person finds a Western toilet as their only option, they usually stand on the toilet seat and squat. The mess this can leave behind still gives me nightmares.

Ah well – such are the joys of travelling! It’s enough to make you constipated though, that’s for sure.

The trauma of Tiger Leaping Gorge’s public toilets behind us, we’re now back in Lijiang for one last evening of relaxation. Tomorrow we leave Yunnan behind and head over to Sichuan – our third province for this trip. From here on in most of our stops are bigger cities, with occasional day trips to smaller towns. We’re also heading east from here – towards the more densely populated and modern parts of China. No doubt this will mean a change in the pace of things around us and an end to solitude and serenity, but more fascinating history and culture to absorb. For now though we’re just happy to have been able to spend this week in Yunnan, and to have sampled some of this region’s natural wonders – especially Tiger Leaping Gorge! 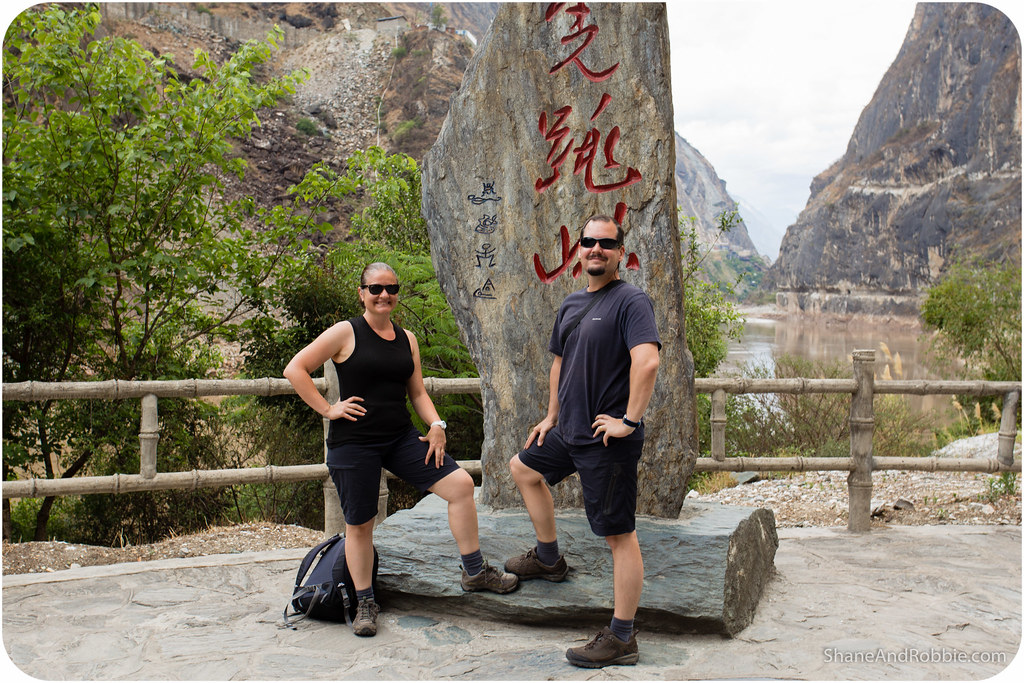