FALLING IN LOVE WITH THE GIANT PANDAS OF CHENGDU
Leaving the mountains and epic scenery of Yunnan behind, we flew north to Chengdu this morning. This city is the capital of Sichuan province, the economic hub of central China, and home to 14 million humans and 130 giant pandas. It was the pandas that got our attention today; we spent our afternoon at the Chengdu Panda Research Centre and fell in love with these lazy, lumbering giants. It’s official: pandas are adorable!

Our flight from Lijiang to Chengdu was uneventful enough, with the only surprising moment being when we smelt smoke in the plane. Seems some provincial moron couldn’t read the “No Smoking” signs, or understand the multiple announcements that clearly stated (in multiple languages) that this was non-smoking flight. It’s actually not the first time this has happened – every flight we’ve been on in China so far we’ve had at least one idiot sneak into the toilets to have a cigarette. As if we’re not ALL going to know you’ve been smoking, what with the whole plane breathing recycled air and all?! No one else on the plane seemed to mind though, which is probably just a reflection of how habituated everyone is to the smell of tobacco smoke here. A huge percentage of the population in China smokes (mostly men) and we’ve found that the stench of cigarette smoke is never too far away, where ever you are. Including, it seems, in airplanes!

We arrived in Chengdu just in time for lunch, which our Sichuan guide Summer* whisked us to as soon as we landed. Now, one of the things EVERYONE knows about Sichuanese cuisine is that it’s spicy, but we had NO IDEA how spicy “spicy” was until today. Our favourite plate over lunch was this amazing aubergine dish that combined garlic, ginger, Sichuan peppercorns, and lots and lots and lots of chilli. It was delicious but may have consequences; we’re not sure what its Chinese name is, but we’ve dubbed it “Regrettably Spicy Eggplant”. The funniest part was, after lunch, when we asked Summer if we could tone down the spiciness next time and she looked at us shocked – she had actually asked the chef to make our lunch NOT SPICY! We may be in a whole world of hurt over the next few days here in Sichuan…..
*All our guides have adopted English names which seem to have nothing to do with their Chinese names, but do seem to reflect their personalities. Our guide in Yunnan, for example, had a very sunny disposition and had, very appropriately, chosen the English name Sunny. And Summer here in Sichuan is bright and bubbly which makes her name perfect too! 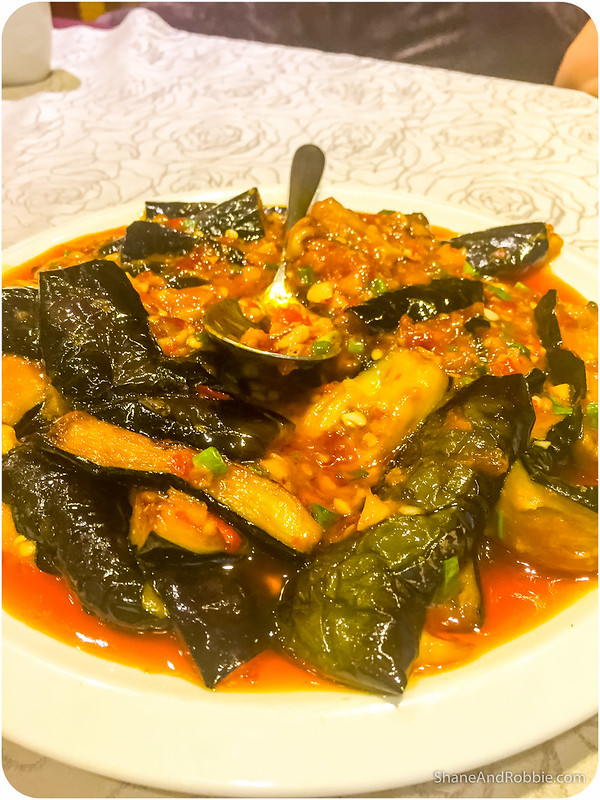 Located almost at the geographical heart of modern China, Sichuan has always been a prosperous province, and one that was fought over many times by the various factions and political powers that have tried to dominate this vast land. Because of the region’s bounty of flat arable land, rivers, and natural resources it’s often referred to as Tian Fu Zhi Guo in Chinese (i.e. the Heavenly State). Still today it’s one of China’s wealthiest provinces and Chengdu, the capital, a major economic and industrial hub.

Chengdu is by far the biggest Chinese city we’ve been in so far – it’s the fifth most populous city in China; its airport is one of the top 40 busiest airports in the world; and more than 260 “Fortune 500” companies have established branches here. It’s always been an important city, mainly due to its strategic location at the crossroads of many trading routes. Being at the centre of the vast, fertile Chengdu Plain, the city has also always been a place of abundance. 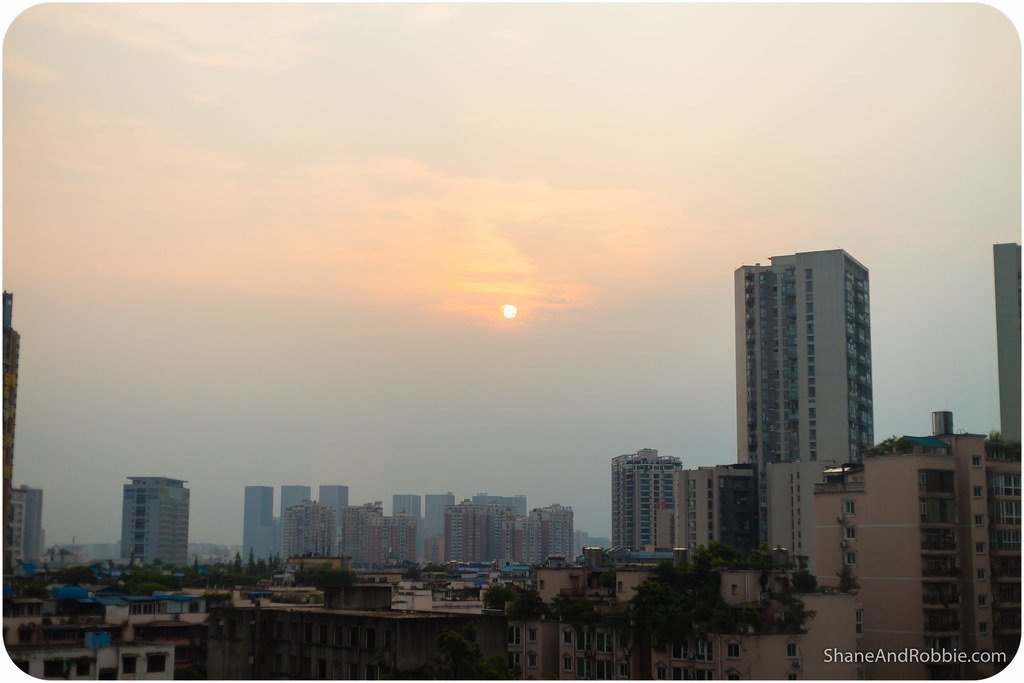 The things Chengdu is most famous for in most people’s minds, however, is that it is home to the world’s largest and most successful panda breeding and research centre. The Chengdu Research Base of Giant Panda Breeding is a non-profit research and breeding facility for giant pandas and red pandas founded some 30 years ago. It’s essentially a live-in IVF clinic* for pandas that doubles as a zoo.
*Pandas can struggle to “make babies” in captivity so zoos around the world have resorted to artificial insemination to help them along. The centre in Chengdu has the highest success rate in the world with more than 125 panda births attributable to their “assistance” over the past 30 years. 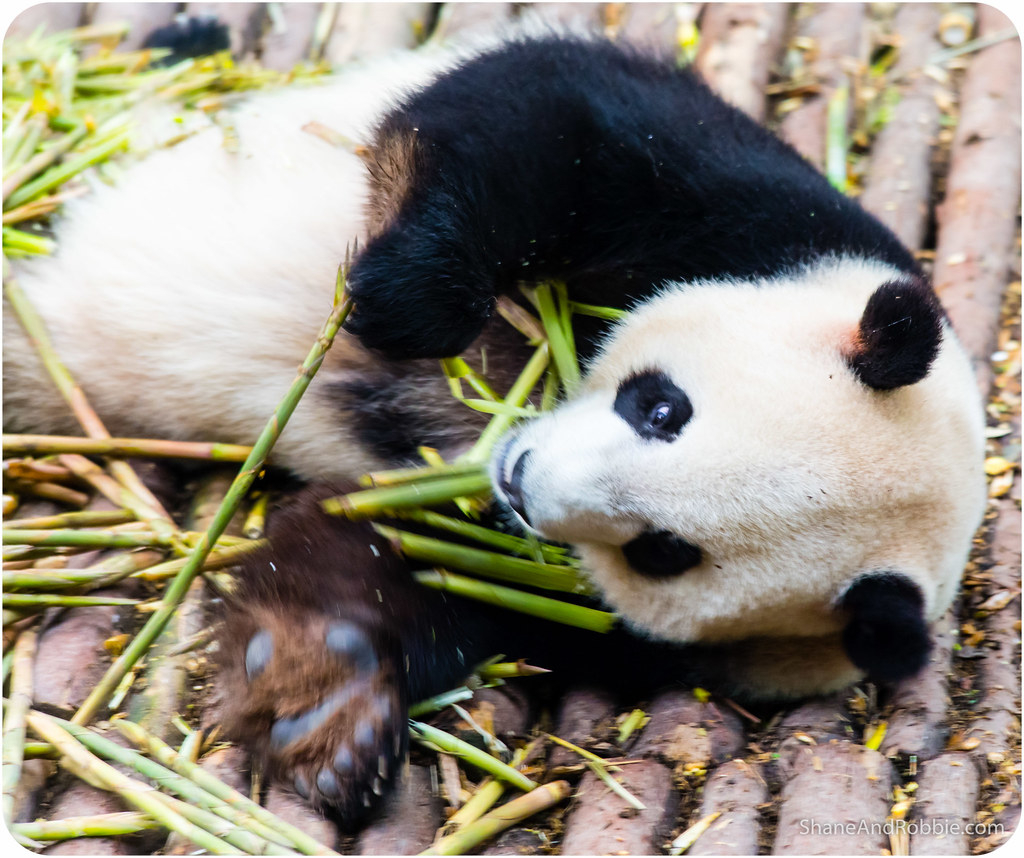 The giant panda is one of the rarest animals in the world; there are only 1,500 estimated to be alive in the wild (80% of which live in the mountains of Sichuan). As a result of farming, deforestation, and urban development, the giant panda has been driven out of the lowland areas where it once lived. Called dà xióng māo in Chinese (i.e. giant bear cat), these adorable bears are actually much bigger than we expected: full grown adults weigh up to 150kg! 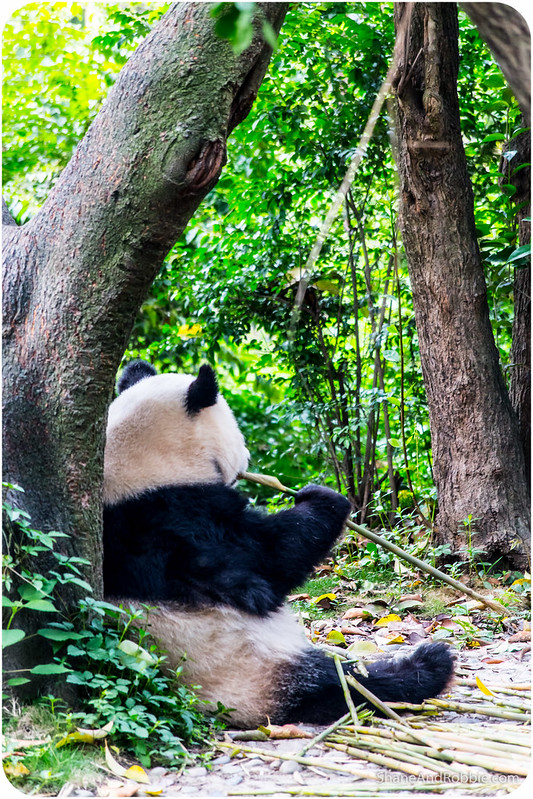 As we strolled through the centre and watched the pandas munching away on bamboo we learnt that pandas are generally solitary, with each adult having a defined territory. They are able to climb and take shelter in hollow trees or rock crevices, but do not establish permanent dens. They don’t hibernate in winter but move up and down in altitude based on the season and availability of food. 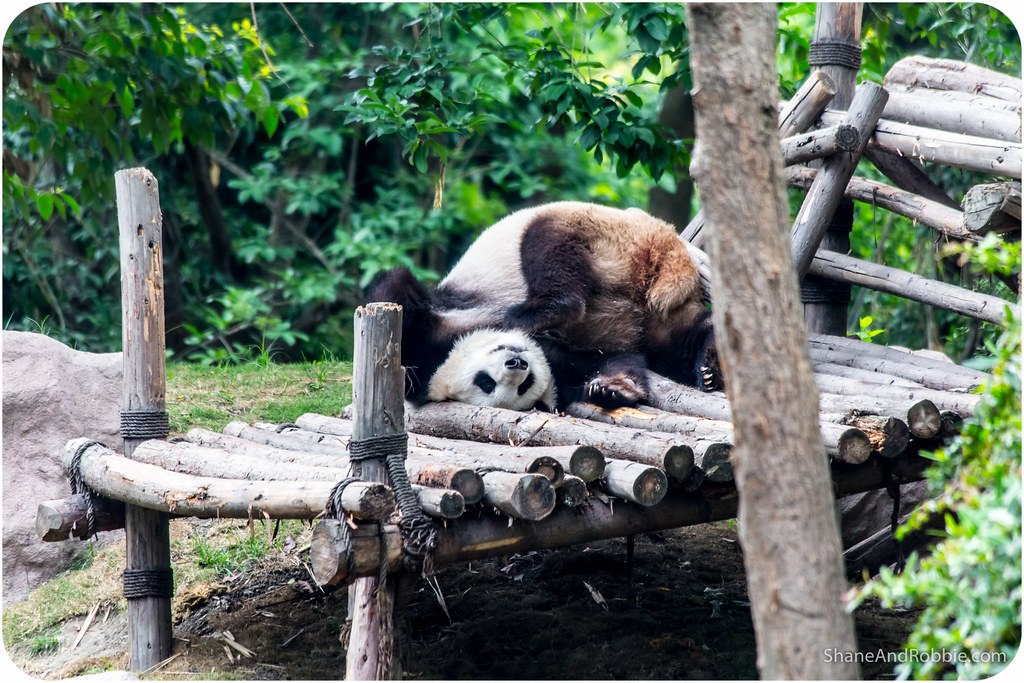 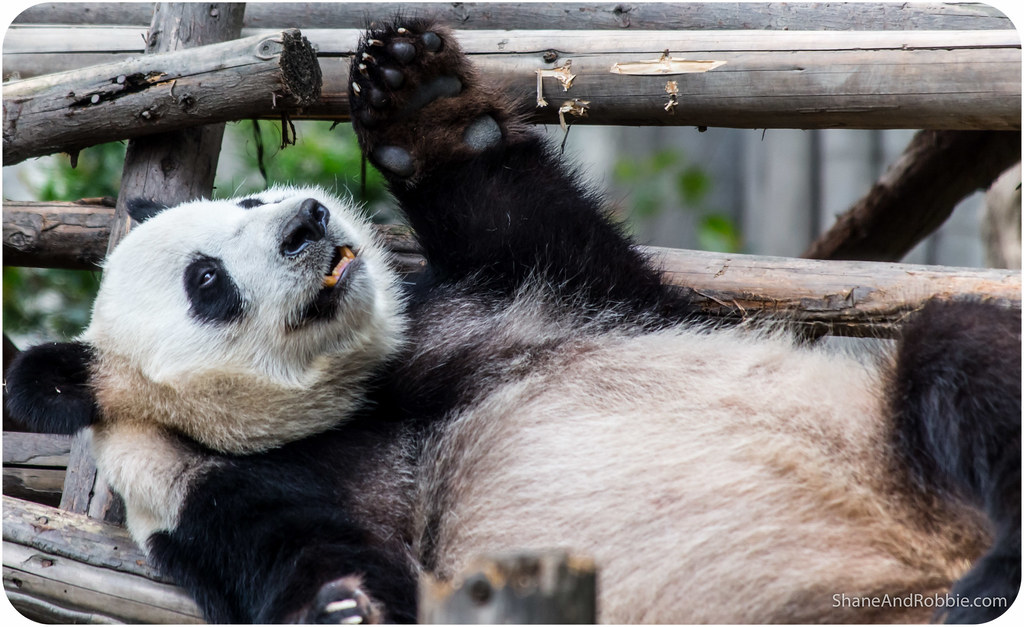 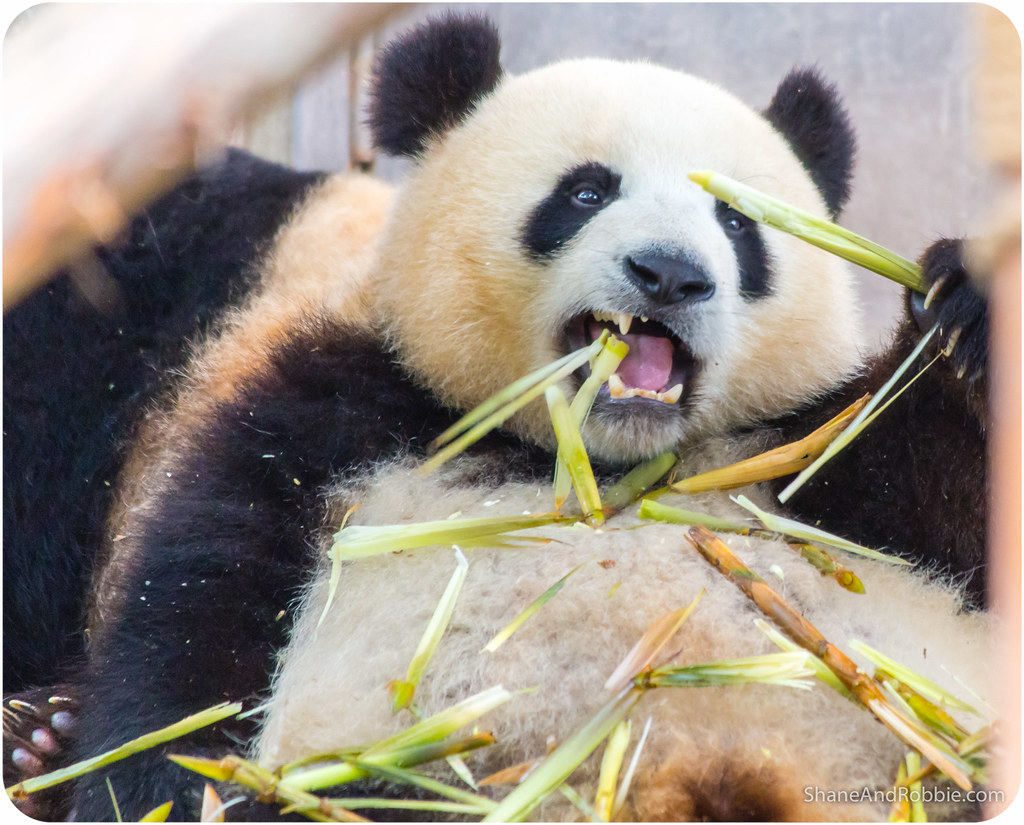 Food, it turns out, is a panda’s major obsession in life. They eat constantly and consume 10-15kg of bamboo shoots per day (which, at the other end, results in up to 8kg of poop per day). We watched them as they stripped the outer bark off bamboo shoots, and gnawed at the crisp, fresh heart of the plant. 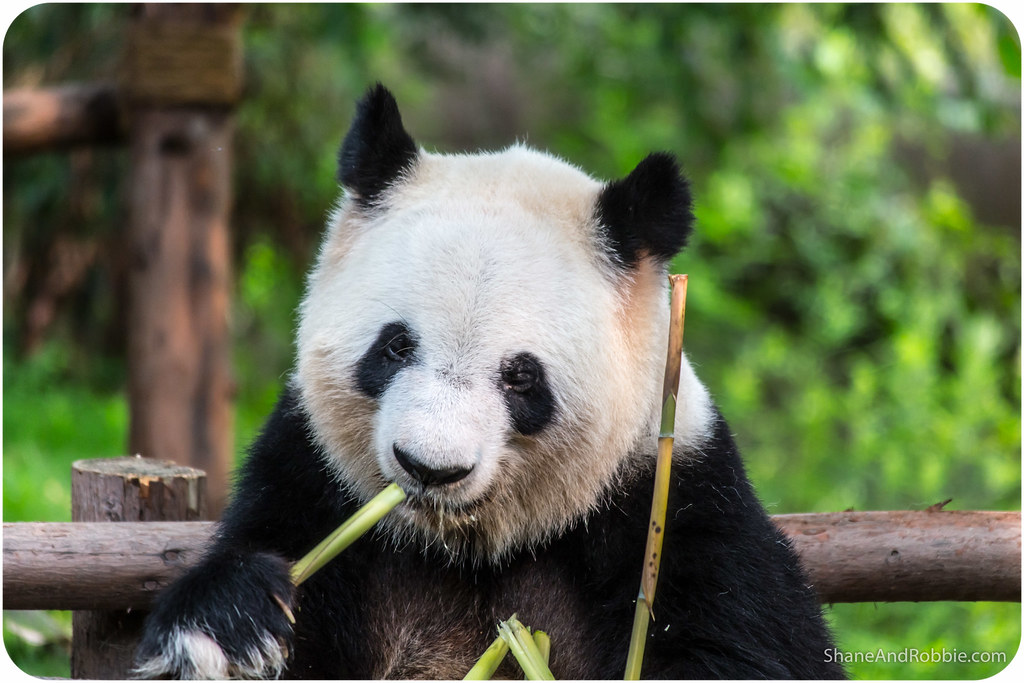 The giant panda’s paw has a “thumb” and five fingers; the “thumb” is actually a modified sesamoid bone which helps them hold bamboo while eating. 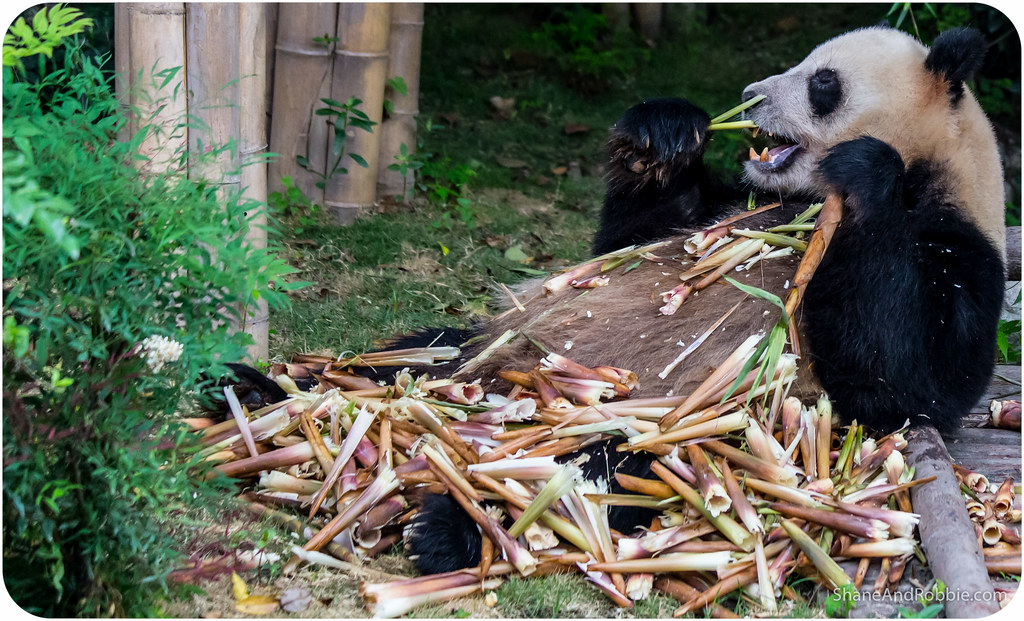 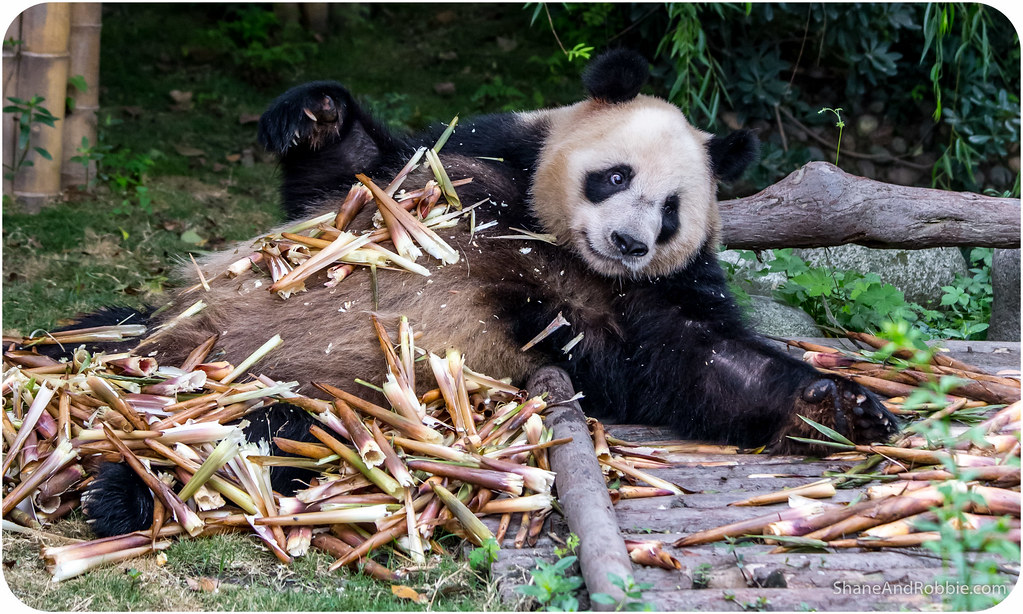 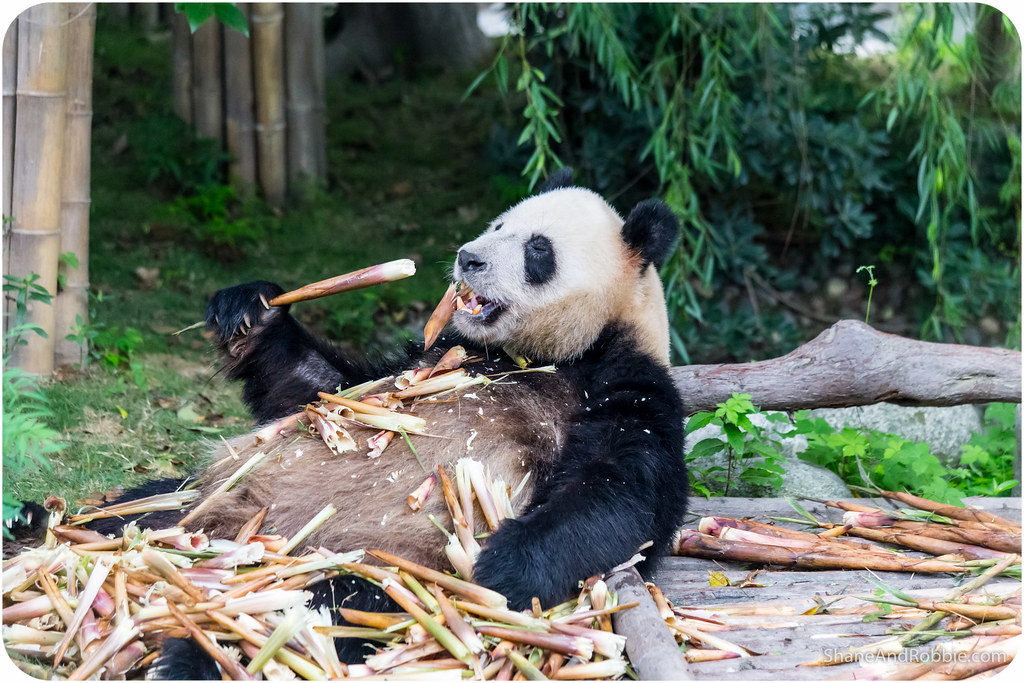 Biologists have found that pandas have the characteristic feature of a carnivore (i.e. sharp teeth, a short digestive system), which means they struggle to extract maximum nutrition and energy from their primarily herbivorous diet. The limited energy pandas get from their diet mean pandas appear very lazy – they do everything possible to limit energy expenditure, including avoiding other pandas and only mating once every 2-3 years (hence the need for artificial insemination to help things along a little). 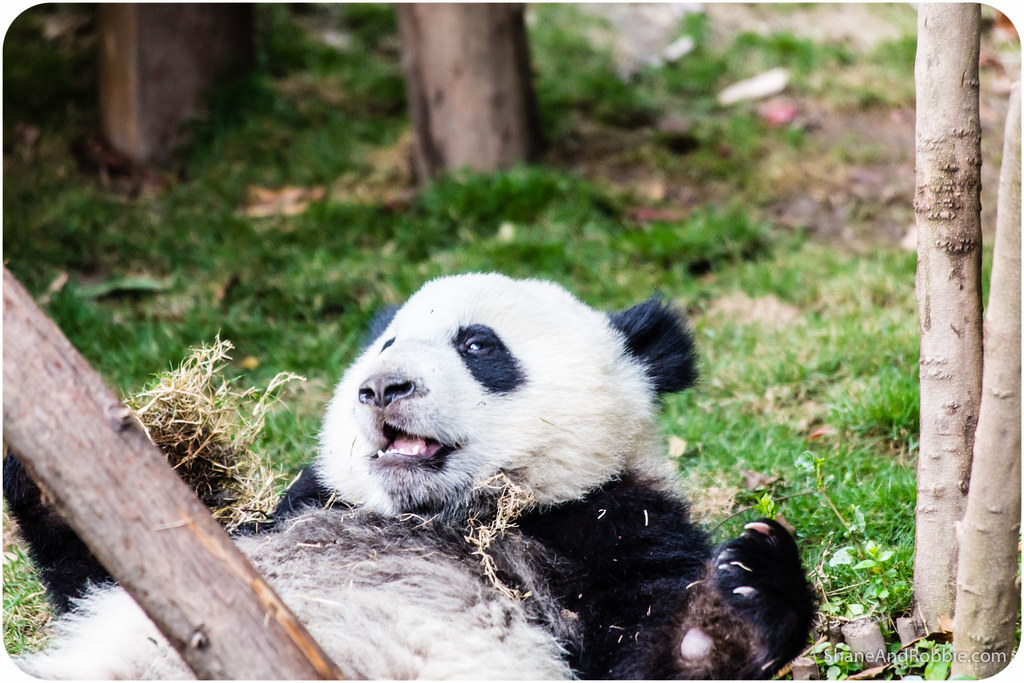 Pandas reach full maturity around 4 years of age and live for about 30 years. Though solitary as adults, the younger pandas at the centre seemed happy enough to be kept in shared enclosures. We watched them for ages as they frolicked and played between naps and bamboo eating binges. 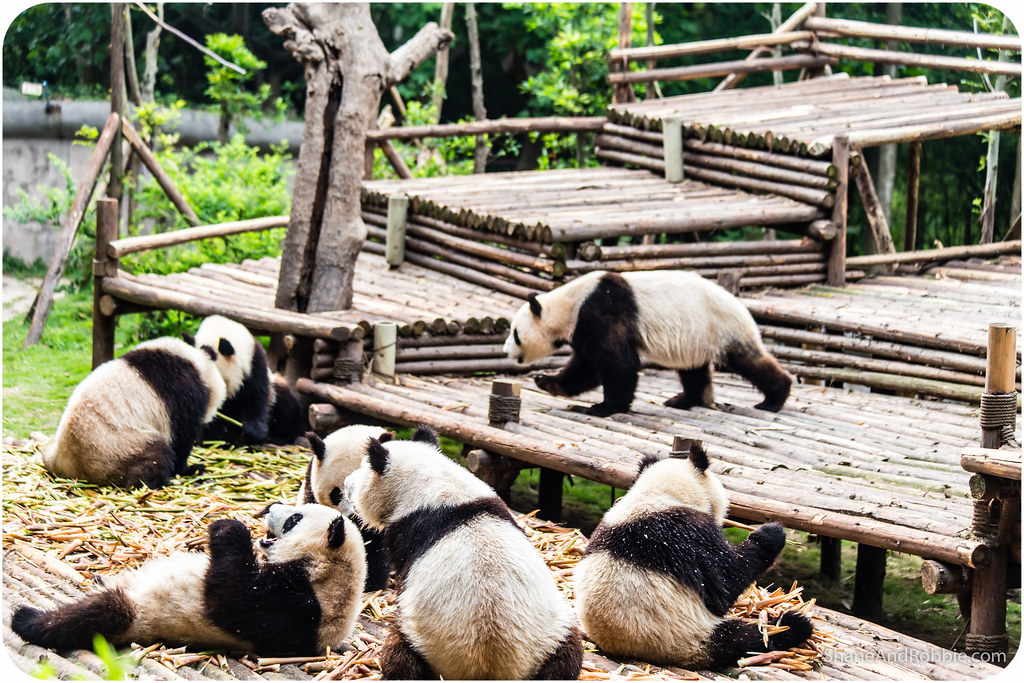 The animals were divided into groups based on birth year, with the youngest ones born just last year being by far the cutest. 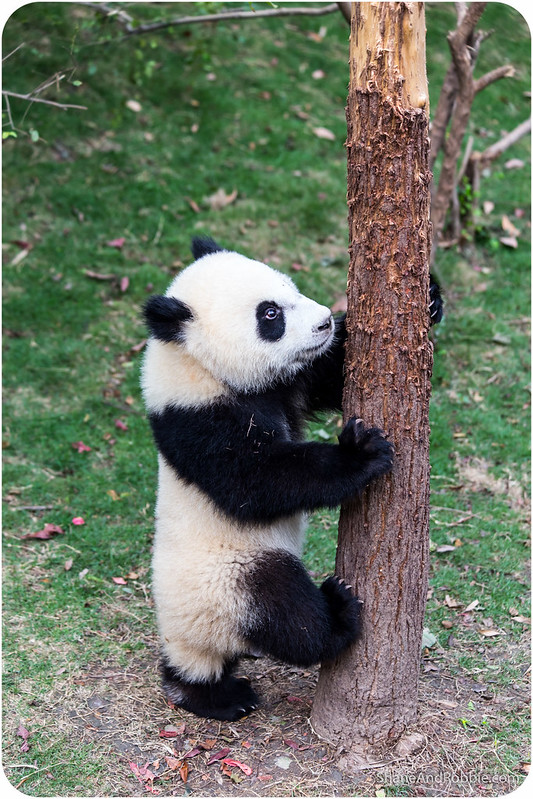 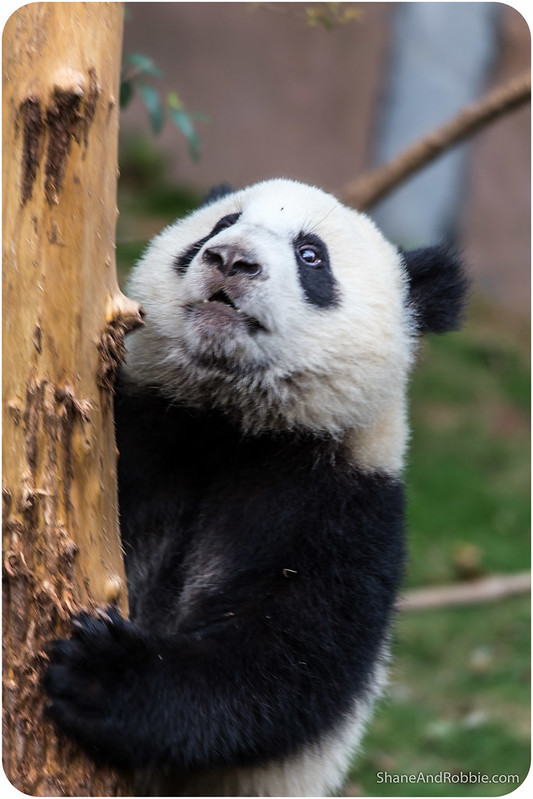 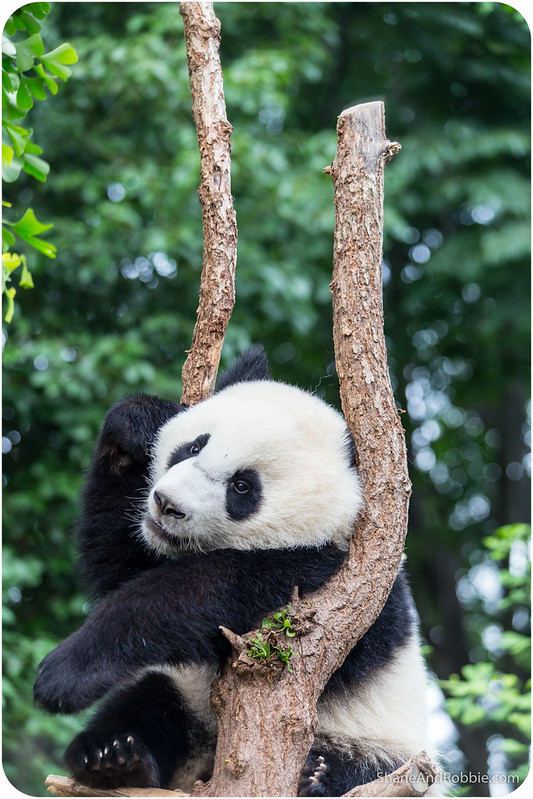 Other interesting factoids we learnt whilst enjoying the antics of the giant cat-bears include:
• When a panda cub is first born, it is pink, blind, and toothless, weighing only about 100g.
• Proportionally, the giant panda produces the smallest baby of any placental mammal.
• The panda’s gestation period ranges from 90 to 160 days, with nutrient availability determining the length of gestation (i.e. the mother’s body will lengthen gestation if nutrients have been in short supply).
• If twins are born, usually only one survives in the wild. The mother will select the stronger of the cubs, and the weaker will die. The mother has to do this as she is unable to produce enough milk for two cubs, since she does not store fat.
• A month after birth, cubs have developed fur and have the characteristic black and white colouring of mature pandas. Their fur is initially very soft and coarsens with age.
• The cubs can eat small quantities of bamboo after 6 months, though mother’s milk remains their primary food source for most of the first year.
• Giant panda cubs weigh 45kg at 12 months of age.
• Cubs live with their mothers until they are 2 years old.
• The father has no part in helping raise the cub. 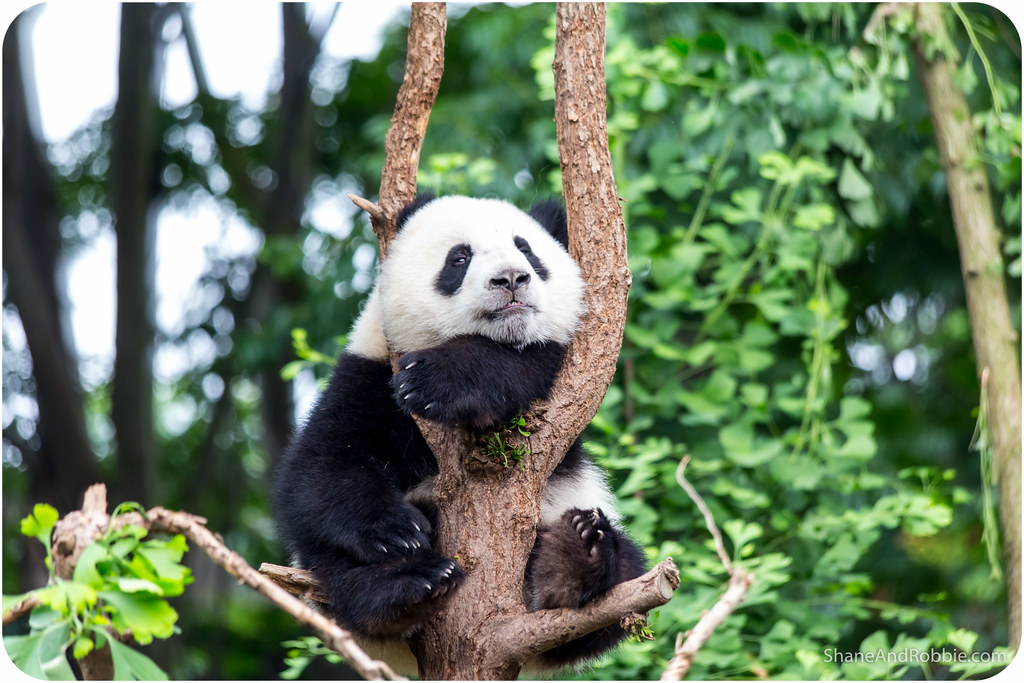 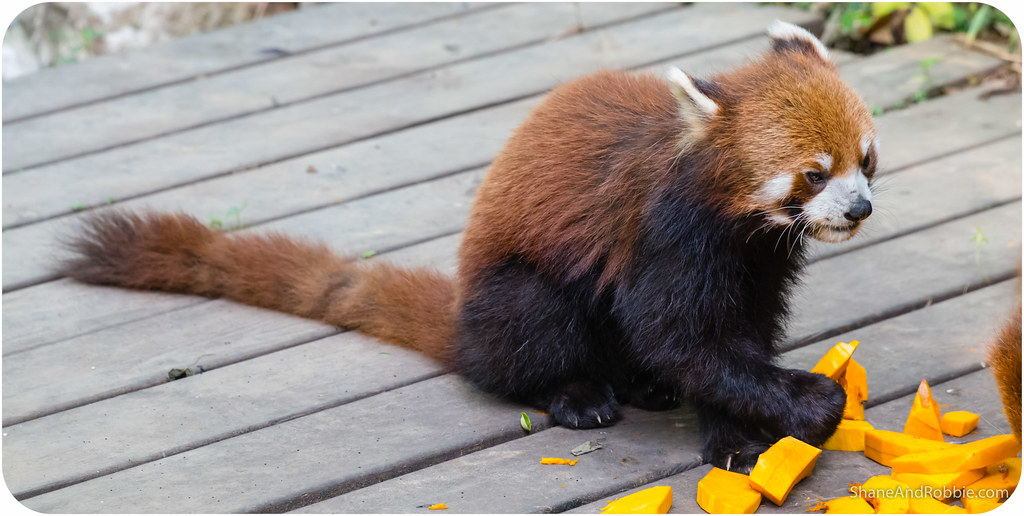 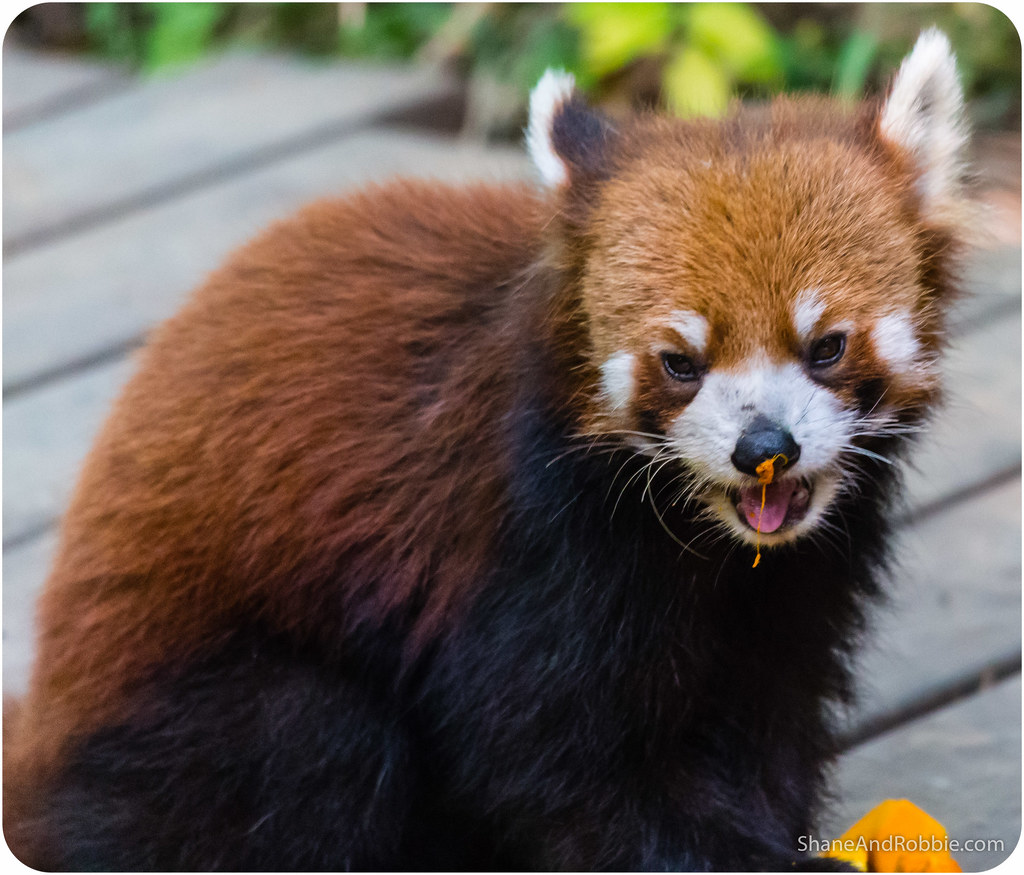 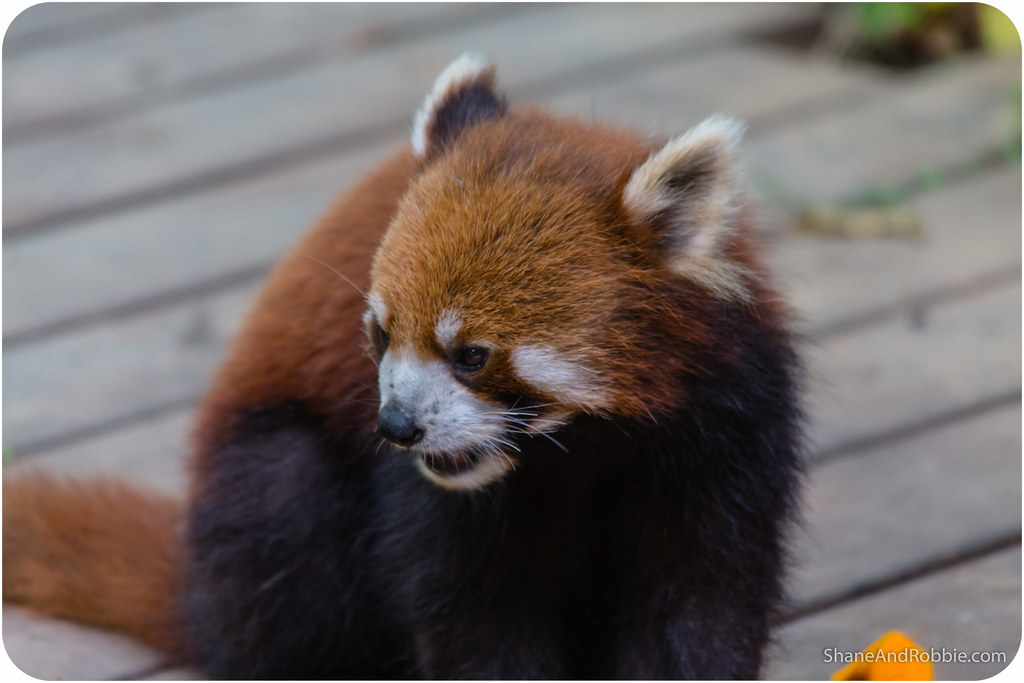 Like the giant panda, the red panda is native to this part of China and is an endangered species. They don’t seem to have the same issues with mating, however, and breeding programs in captivity have been quite successful.

Obviously seeing animals in the wild is so much better than seeing them in zoos like the Chengdu Research Base of Giant Panda Breeding, but at least this was a really good zoo, as far as zoos go – the enclosures were huge and the animals seemed well enough. And if seeing animals in centres like the one we visited today helps people value and appreciate the natural world around them, then they’re a great thing in our books. We’re not really “zoo” people, but it was really great to see these hilarious creatures up close today. With their pigeon-toed walk, bloated bellies, and dopey behaviour, pandas really are the goof-balls of the animal world. They’re absolutely adorable and it would be a tragedy if, as human being, our actions caused the extinction of this truly unique species. We can only hope that everyone that visits the Chengdu Research Base of Giant Panda Breeding falls in love with pandas too and gets inspired to do something to help keep them around for as long as possible. 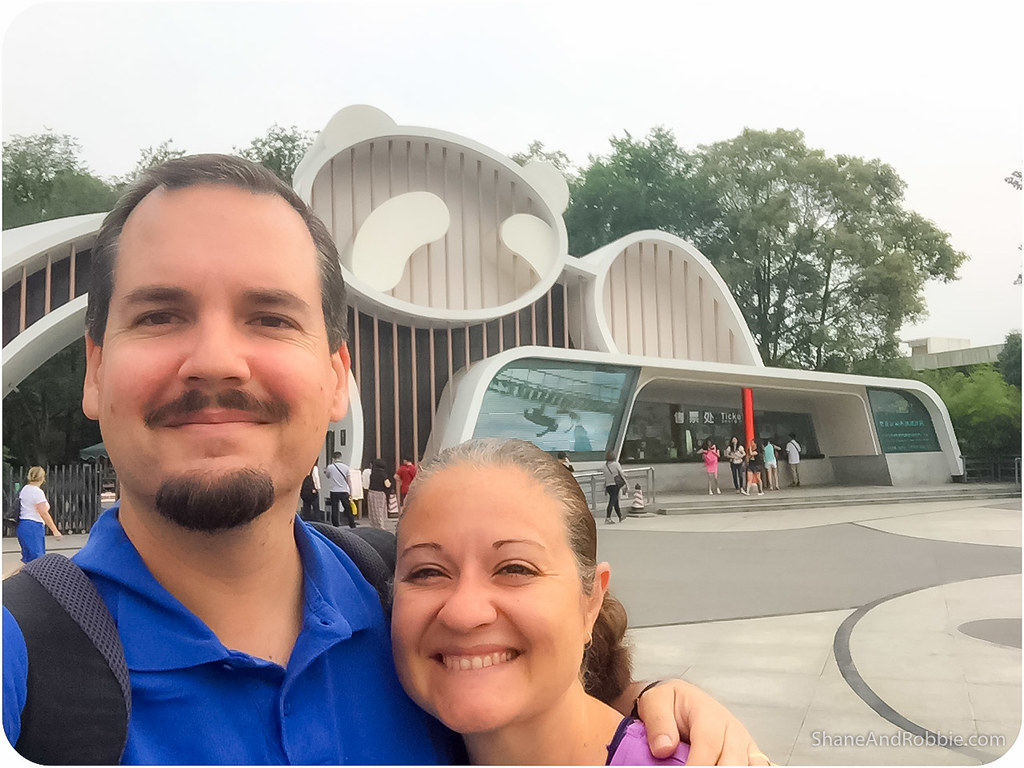