CHANG JIANG LANDUO
The Yangtze River (or Chang Jiang in Chinese) is immense – the sheer volume of water that flows down this mighty waterway is quite incredible. Even though water levels at the moment are low*, the river is still impressive. For most of the day the banks of the Yangtze stretched out 200m either side of our boat, with hills stretching up around us as we sat on our balcony watching the world go past. The scenery today alternated between terraced hillsides where farmers were busy planting rice; villages newly reconstructed by the Chinese government after the Three Gorges Damn flooded the original site; and modern city skylines filled with high-rises.

*The summer rains that normally swell the Yangtze haven’t started yet – the river is at its lowest during this time, just before the monsoon season starts.

Our first full day on the Yangtze River started with a yawn, a stretch, a roll-over, and a sleep-in. A great start to a great day! The morning was pretty uneventful, with the morning’s excursion to the town of Fengdu not enticing us enough to get us out of bed at the allocated time of 7:00am. Essentially it seems the attraction at Fengdu is a recently constructed temple area dedicated to the Taoist “King of Hell” and his demons. We heard from the others guests sharing our dining table over lunch that it was pretty kitsch and naff, so no great loss really! 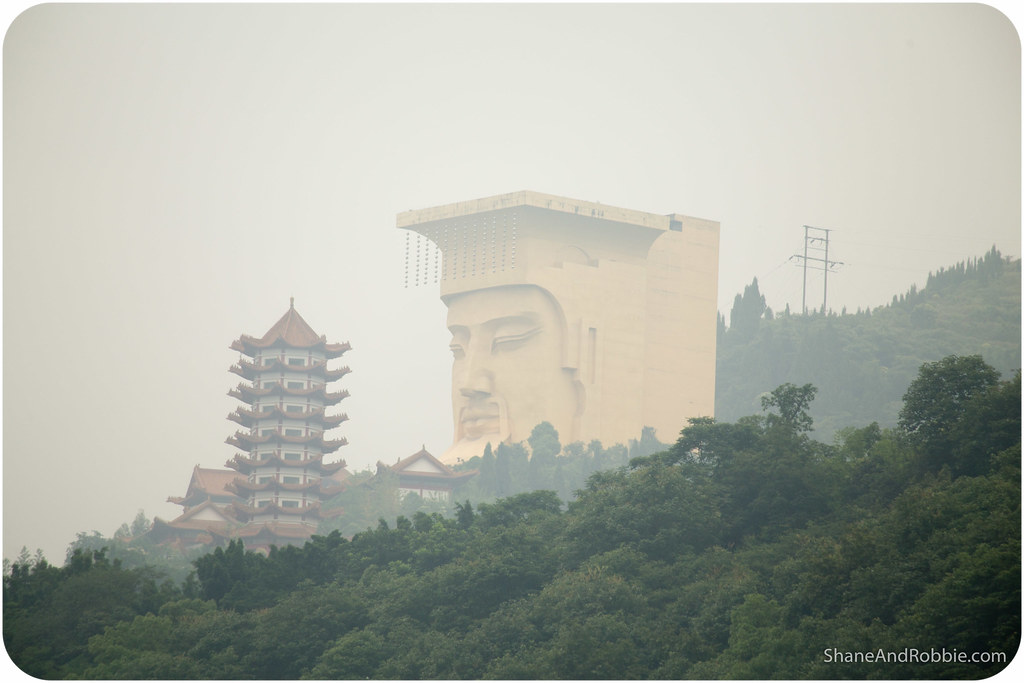 We were quite happy to spend the morning enjoying the scenery and reading our books. Every now and then a lone fisherman, trawling the river for shrimp or small fish, would get our attention, but we soon left these hard working men and their small boats behind in our wake. 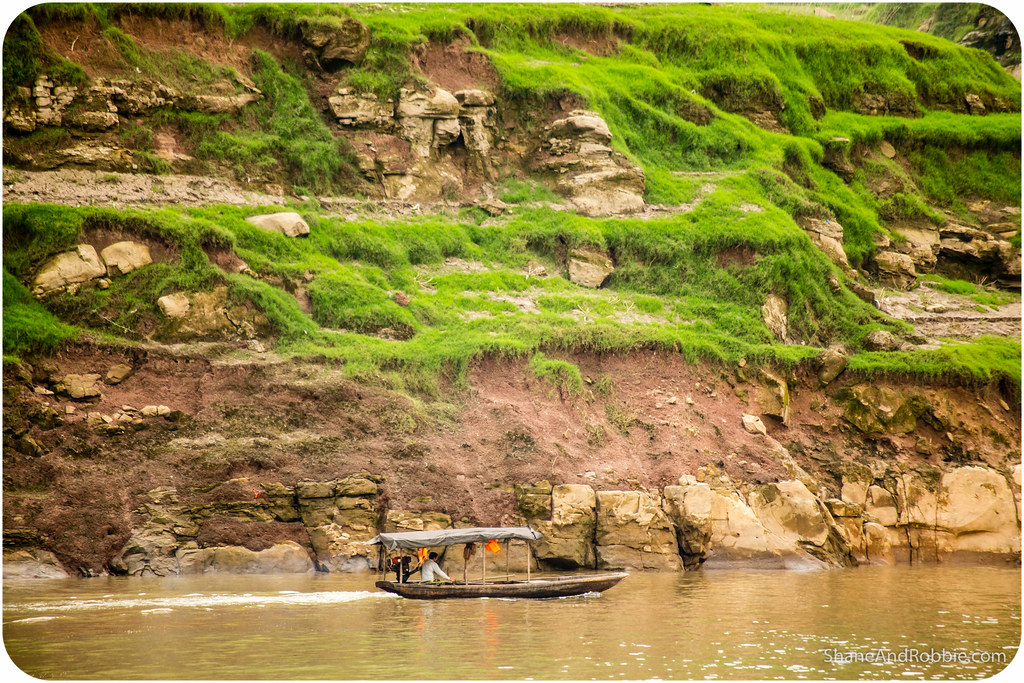 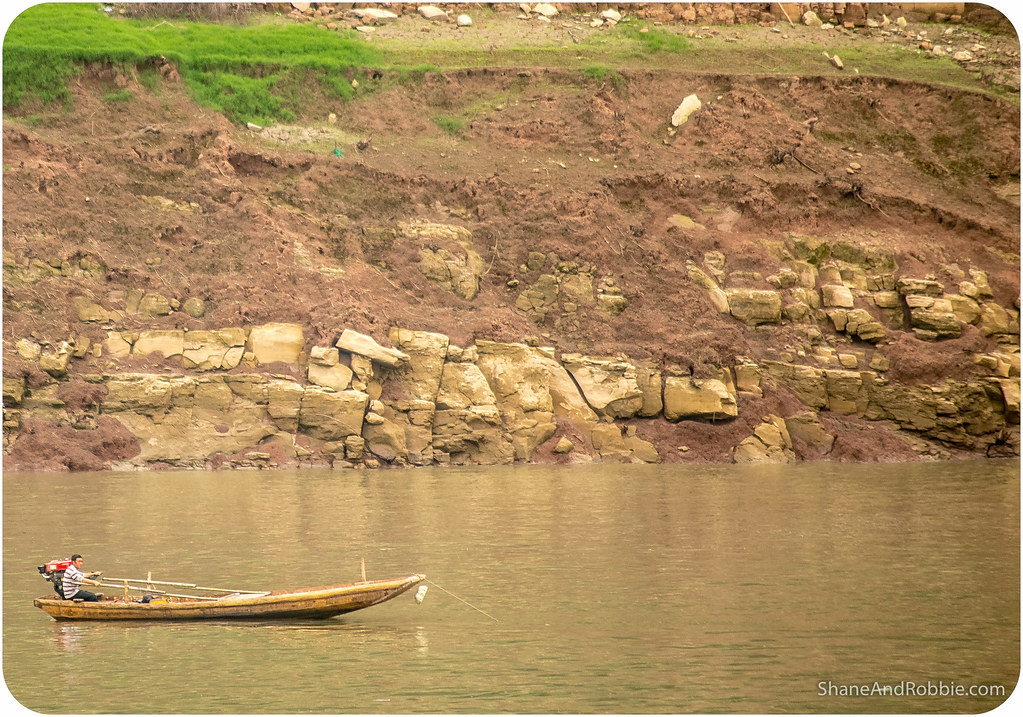 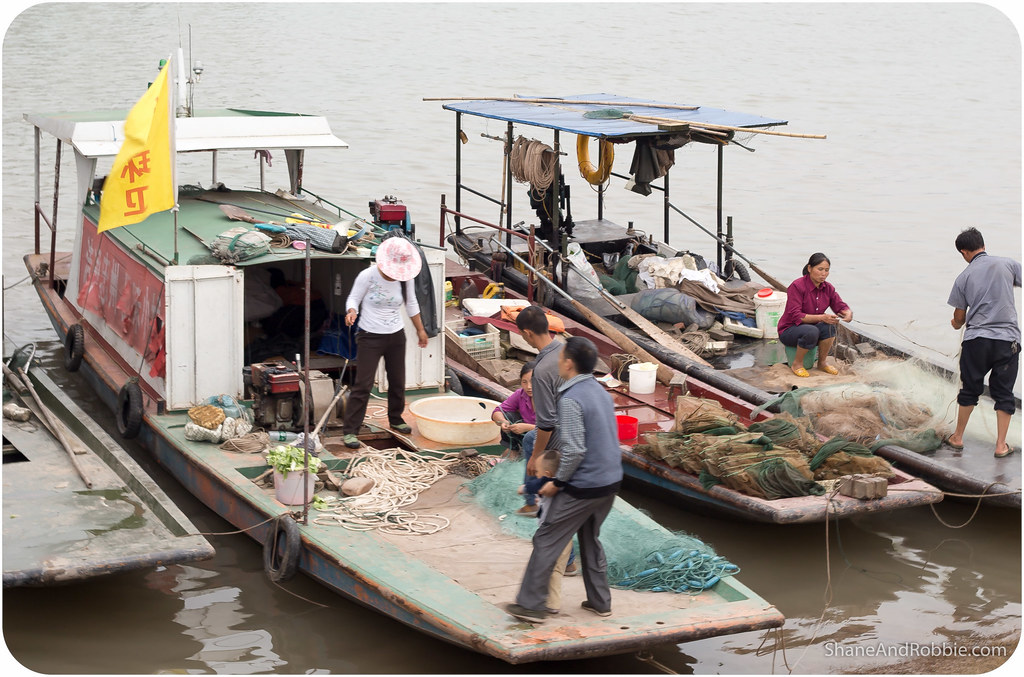 Our cruise ship is in a convoy of about 6 ships, all heading downriver doing the same route, and every now and again we’d overtake one of the other ships, or tone of them would overtake us. 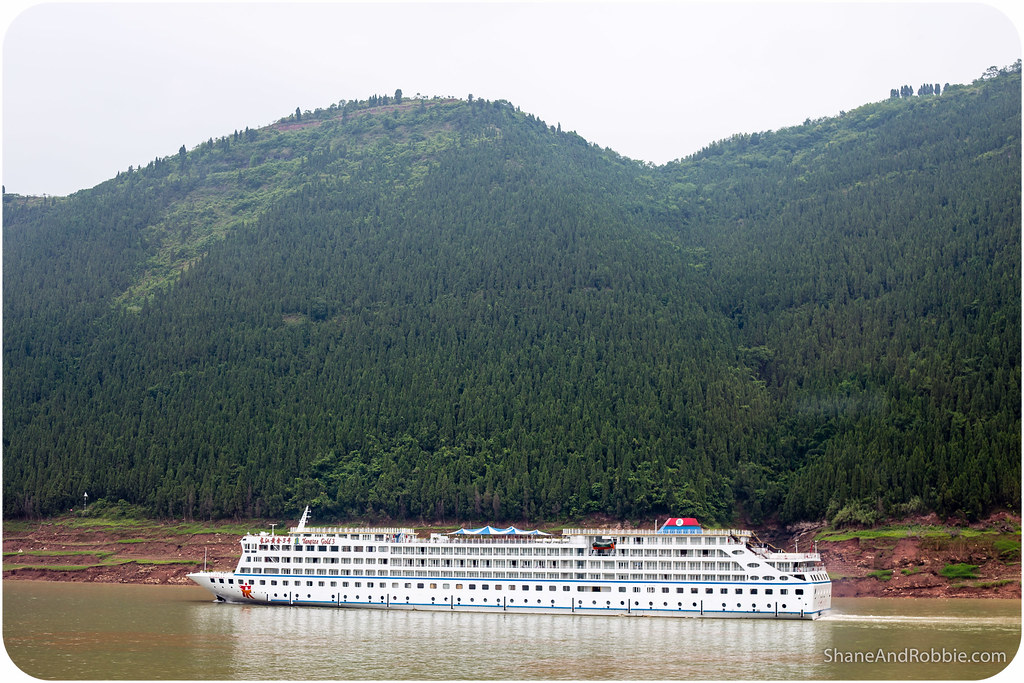 The Yangtze is one of China’s busiest waterways in terms of cargo ships too and we passed a number of these carrying things like gravel, coal, and cars. 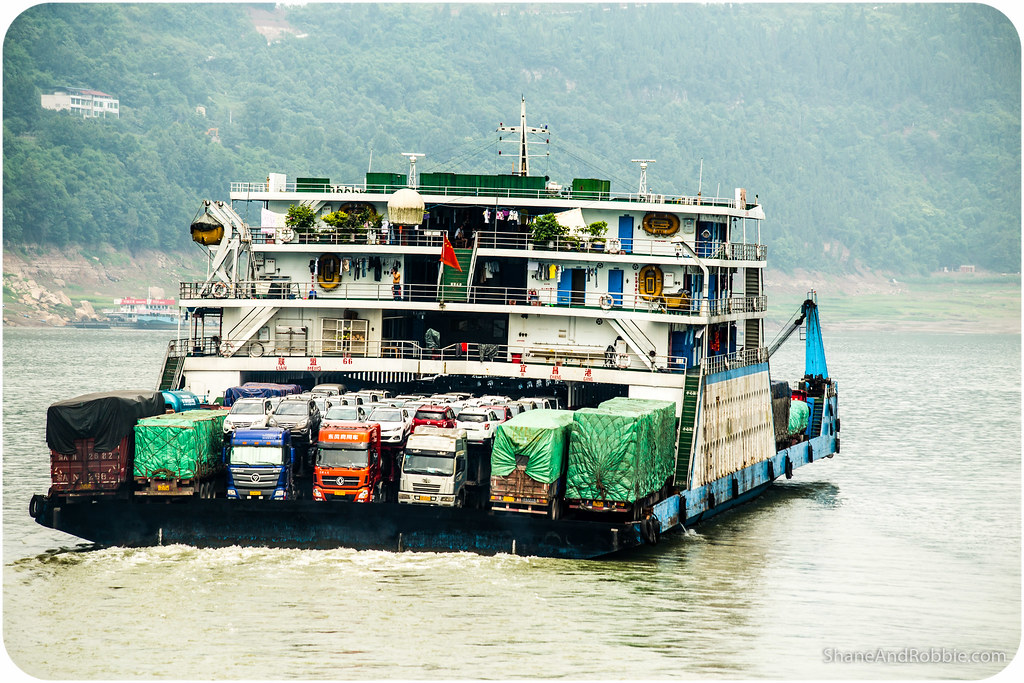 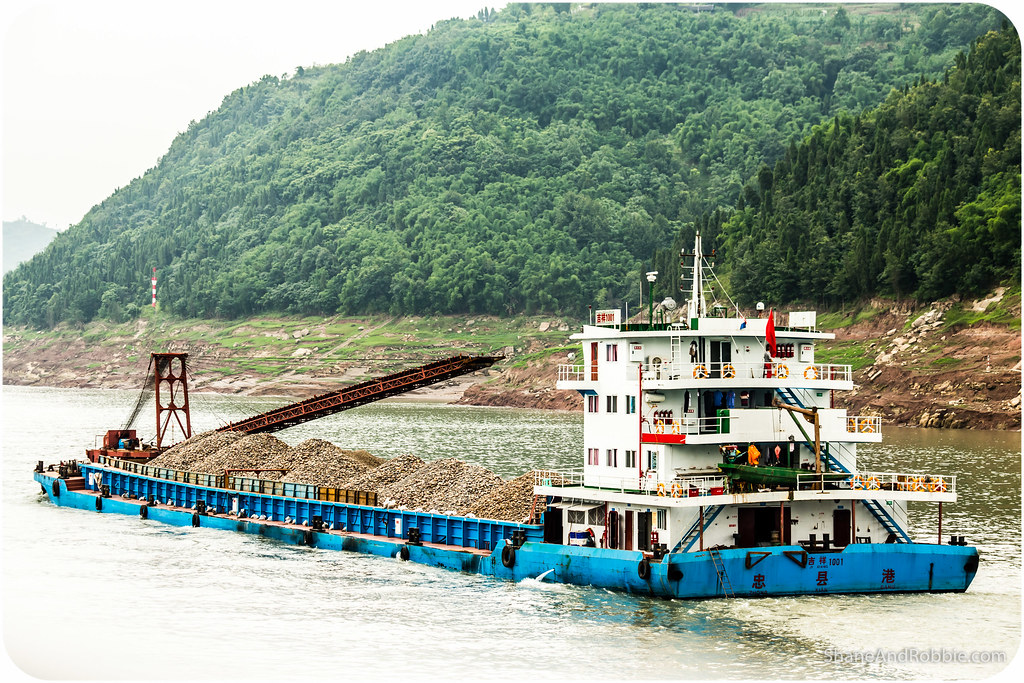 Ever present in the background most of the time were the rich, green hills of central China. The dirt here is rich, alluvial soil and, despite it being the dry season, everything is just so green and lush (especially compared to Aus which, being the driest continent on Earth, doesn’t do a lot of “green”). No wonder the area around the Yangtze was China’s breadbasket for so many centuries! 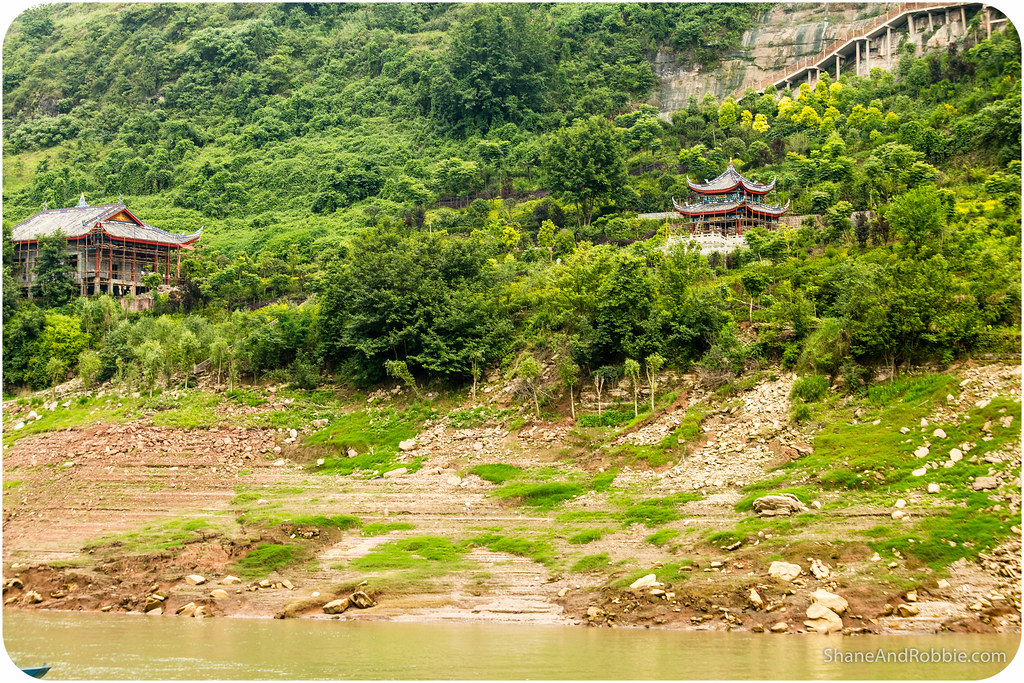 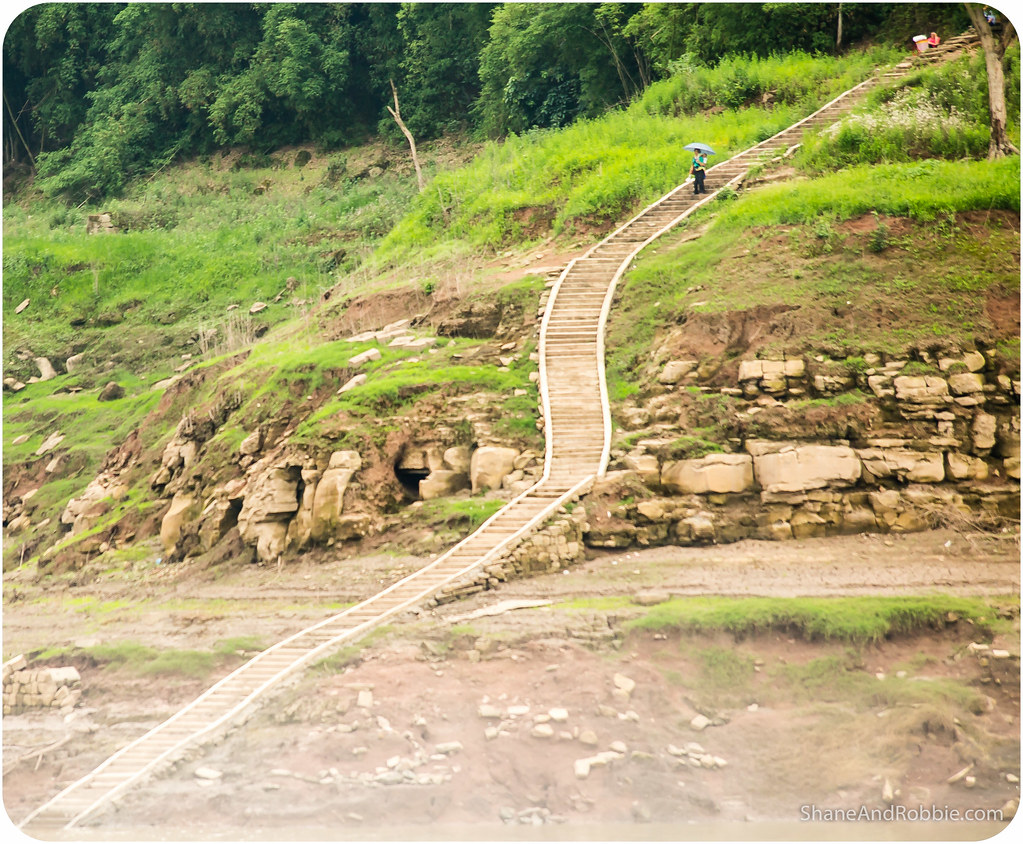 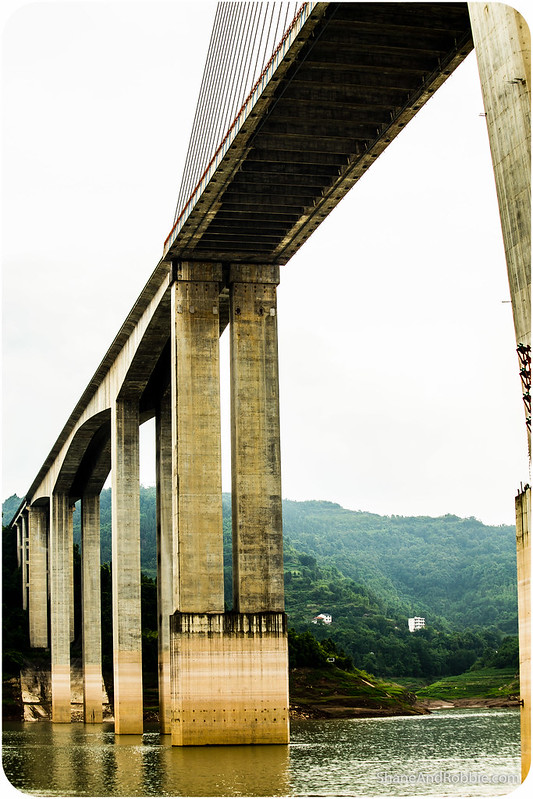 The region around the Yangtze is sometimes referred to as the birthplace of China as it is in these rich river plains that the agrarian society of the Han people* first developed. Crops such as barley, wheat and, later, rice, flourished in the fields around the Yangtze River, allowing the Han people to prosper. With prosperity came the sophisticated culture that formed the foundation for ancient China, and the technology and strength to conquer neighbouring lands.

*China’s dominant ethnic group – they make up some 92% of the population of modern China. 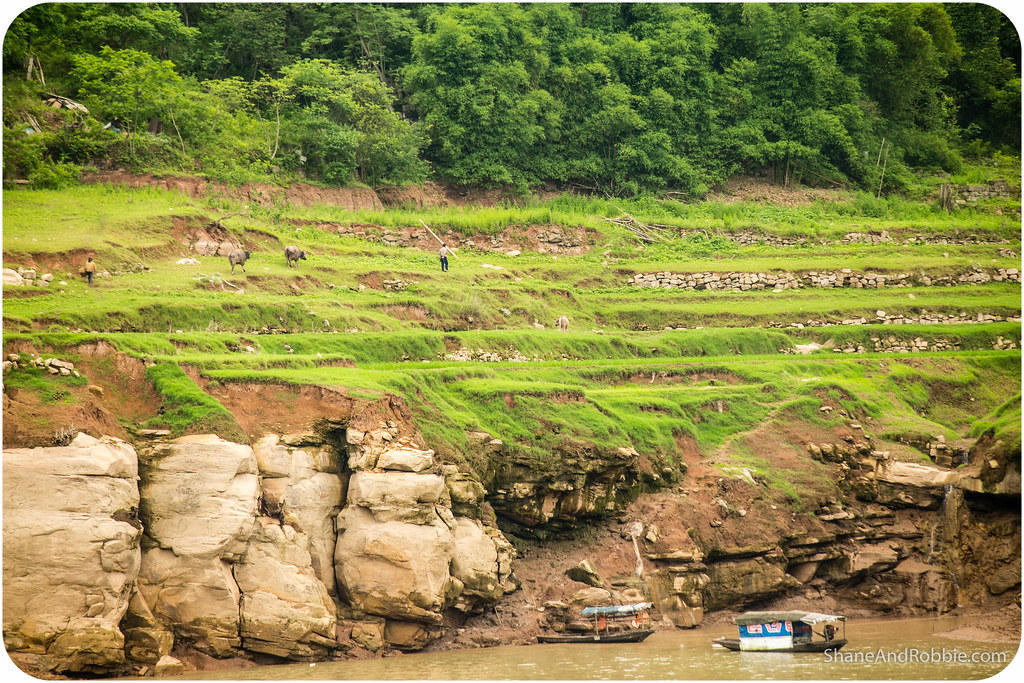 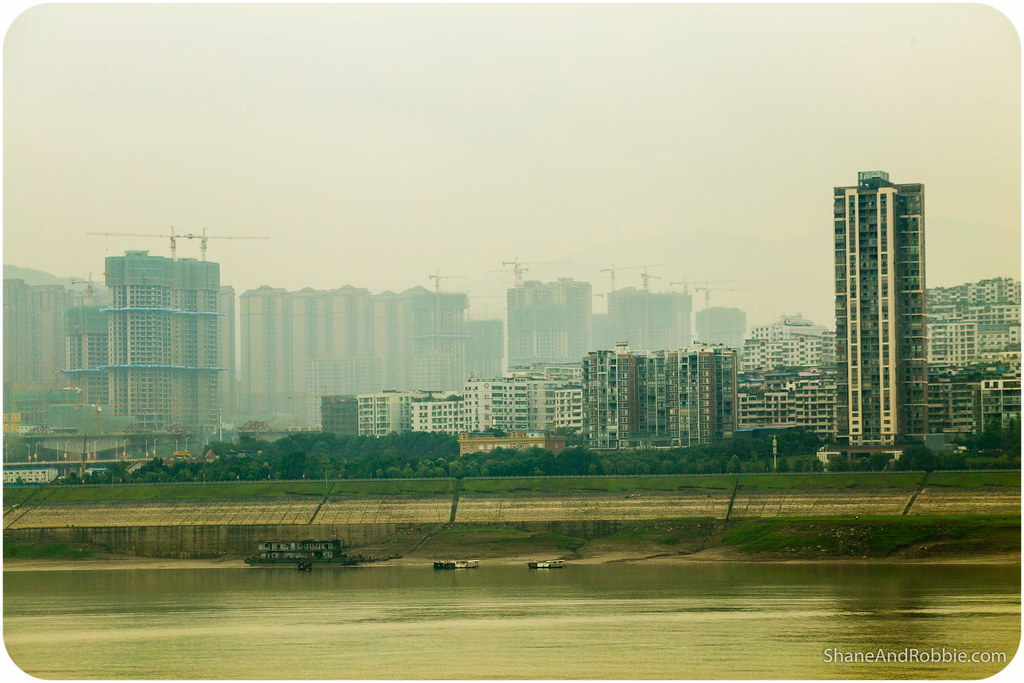 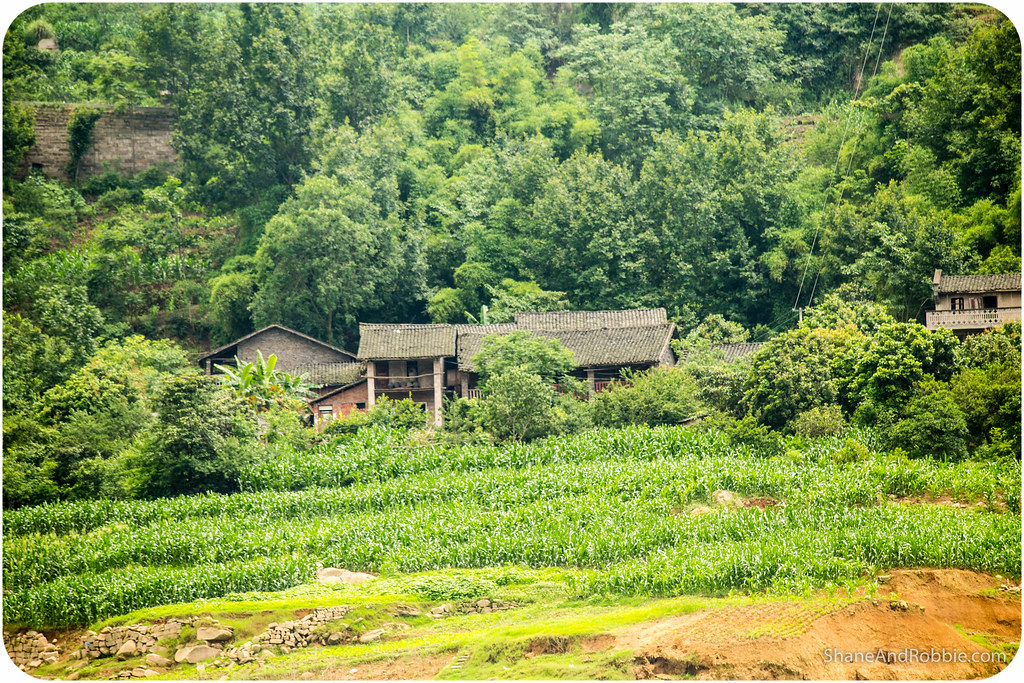 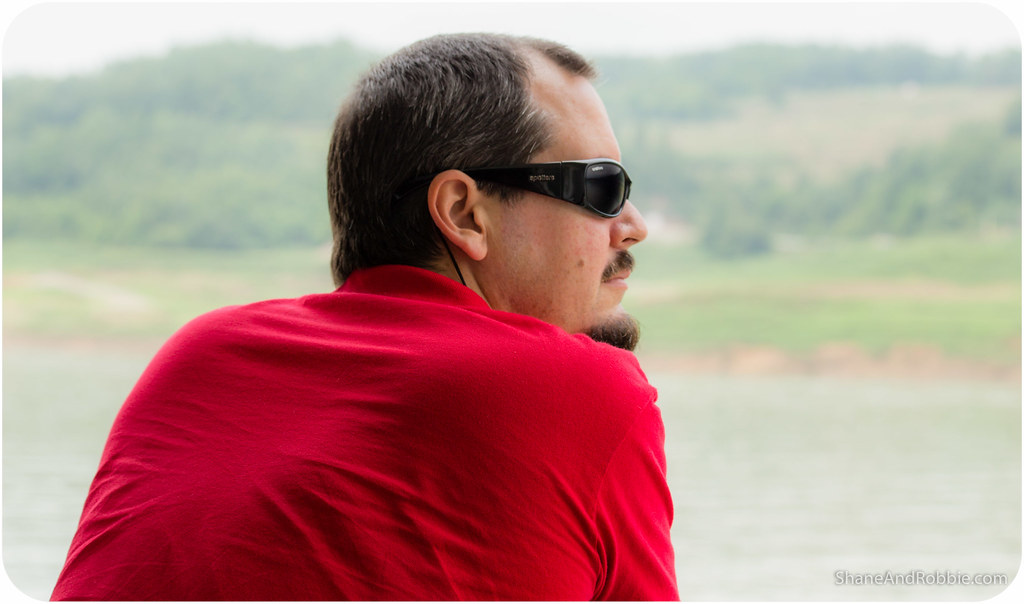 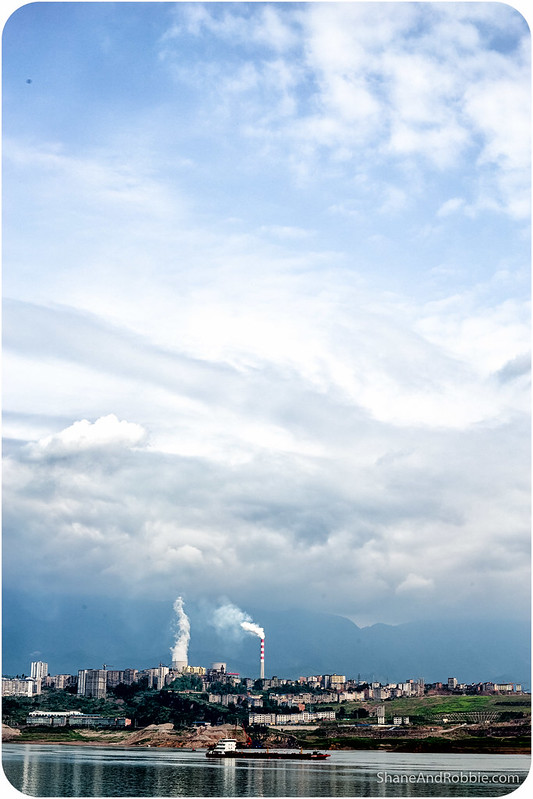 The afternoon’s stop was in the town of Shibaozhai, where we taken on an excursion to see the Purple Rain Pavilion and Manjusri Temple. Built in 1819, the temple used to sit at the top of a 208m hill, overlooking the river. With the building of the Three Gorges Dam, however, what was once a hill near the river’s edge is now a small island in the middle of the swollen river. ALL the cruise boats stop here for tourists to clamber up the steps to visit the temple and the pavilion; so these days access to the island is via a small suspension bridge. 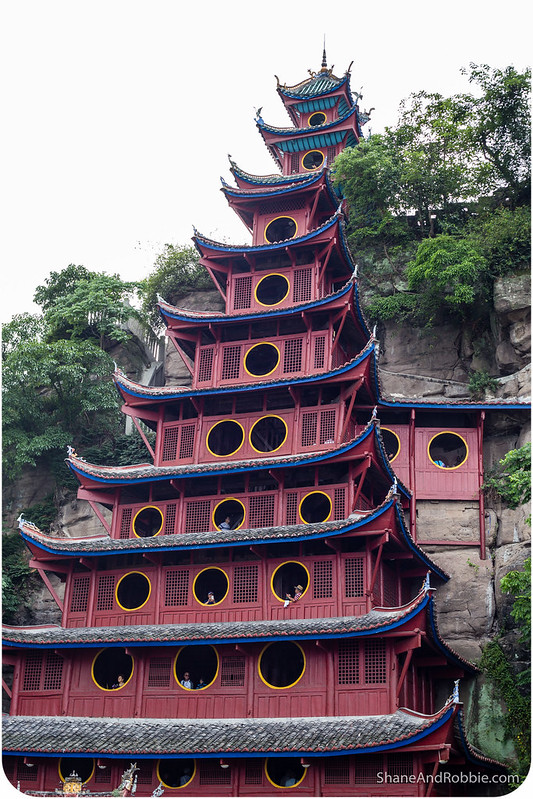 We joined the hundreds of tourists making their way from the riverside boat piers, up through the town (past lots of little market stalls selling the usual array of touristy crap), across the suspension bridge, and up the 99 steps to the temple. The views from the top were nice enough, though the sheer number of people made it feel crowded and chaotic, rather than epic and spectacular. 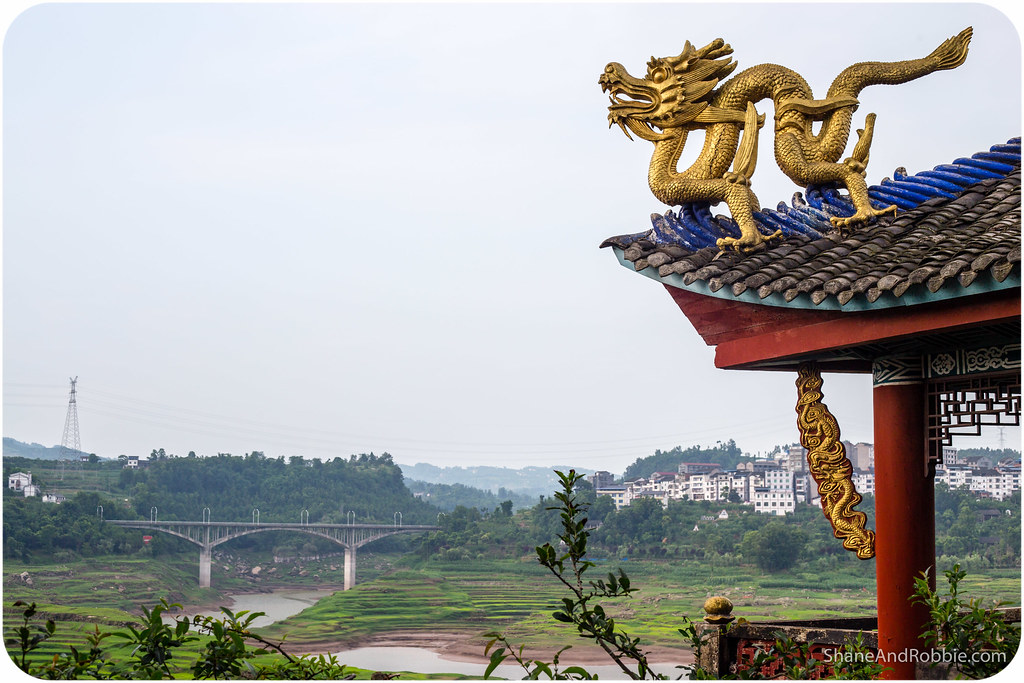 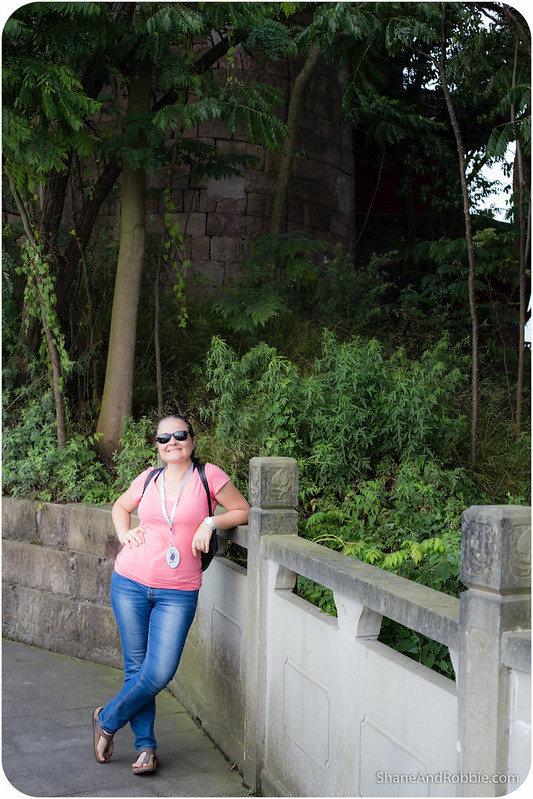 We’re not too fussed about the excursions really – the “main show” for us is the scenery. Floating down the Chang Liang today in this landuo (translation = lazy) fashion, we certainly got to enjoy plenty of THAT. China really is spectacular. 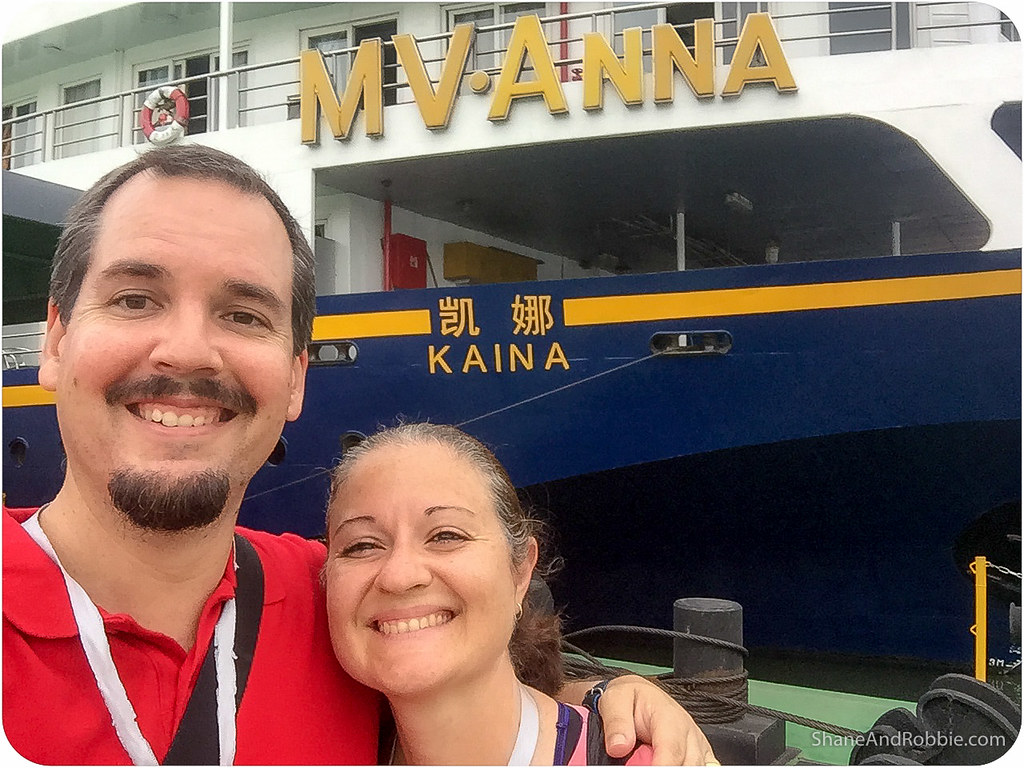 For the evening’s post-dinner entertainment  some of the ship’s crew put on a short “show” in the upstairs bar area that included costumes from the major hisorical periods of Chinese history. With a drink helping to smooth out the rough edges, it was an entertaining enough way to end our first day cruising on the mighty Yangtze River. 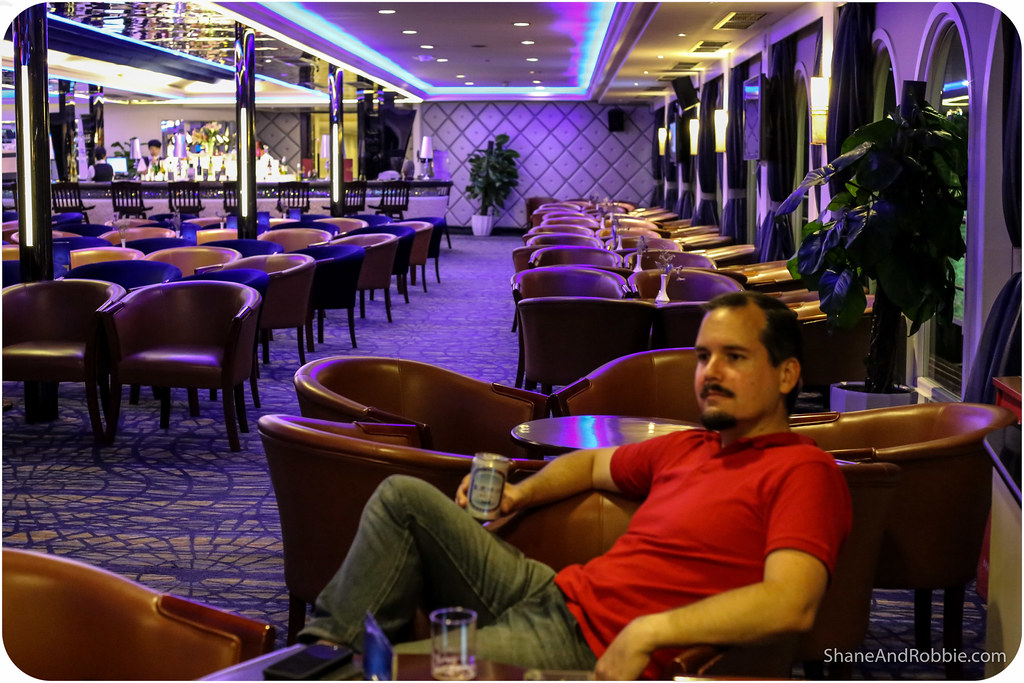