CRUISING THROUGH THE YANGTZE’S THREE GORGES
The Three Gorges of the Yangtze River are the main reason we did this cruise; today we got to see this incredible spectacle up close. We spent most of the day craning our necks to take in the views of the mountains looming large above us. Despite the water level being significantly higher than it was before the building of the Three Gorges Dam, Qutang Gorge, Wu Gorge and Xiling Gorge were still majestic and impressive. 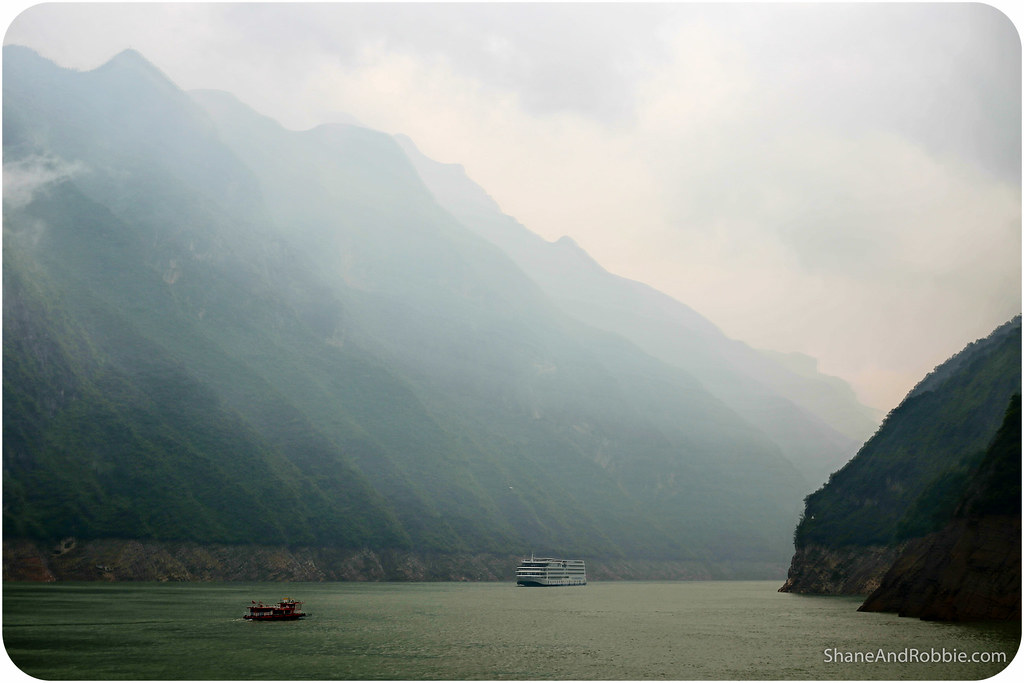 Over the millennia the Yangtze River has cut its way through the sedimentary rock of these mountains, carving out more than 200km of gorges, the first of which is called Qutang Gorge. 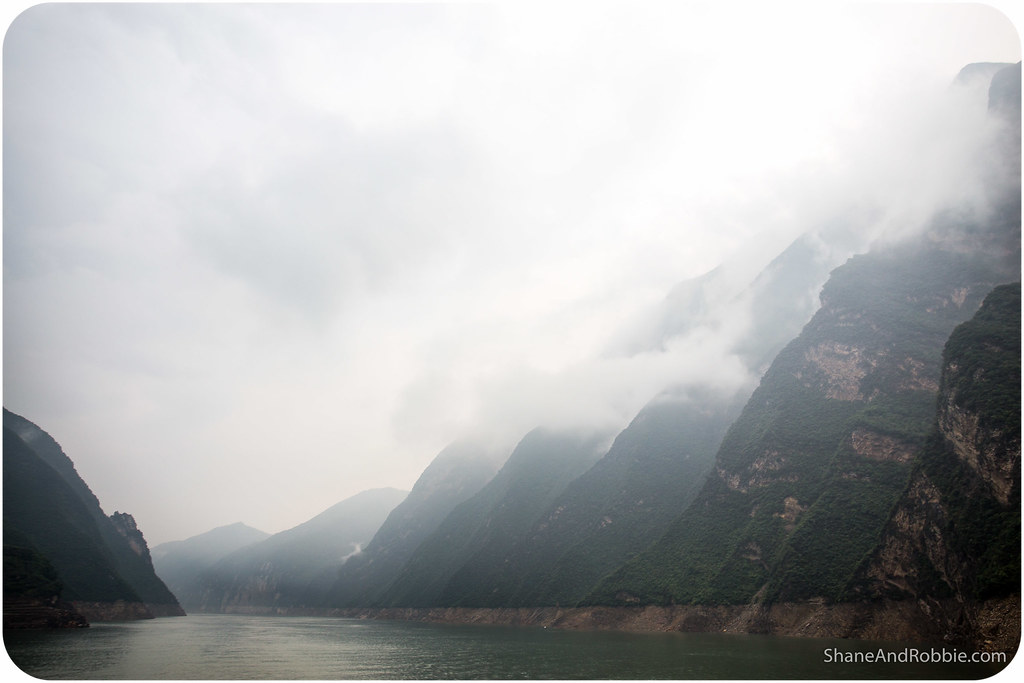 Just 8km long, Qutang is the narrowest, shortest and steepest of the Three Gorges. For most of its length the gorge is only 150m wide and its sheer cliffs are well over 1,000m high. 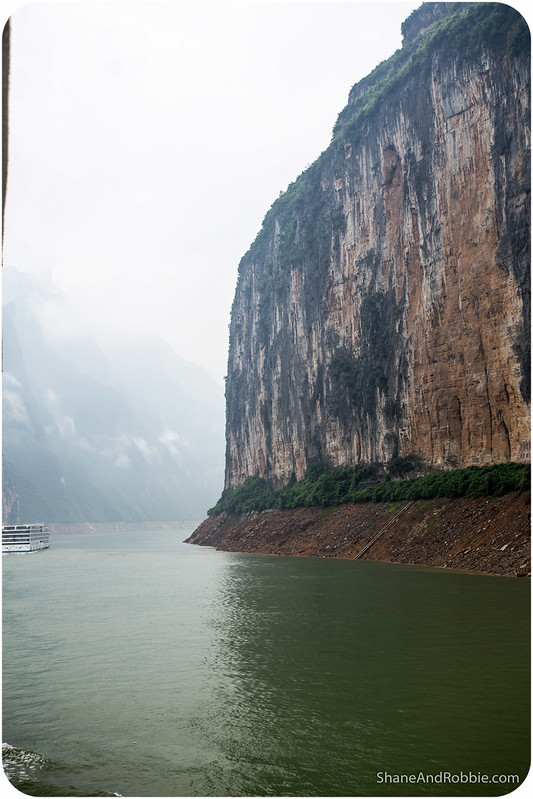 Due to the steepness of the mountain-sides there are no villages in Qutang Gorge – it is uninhabited and only accessible by boat. 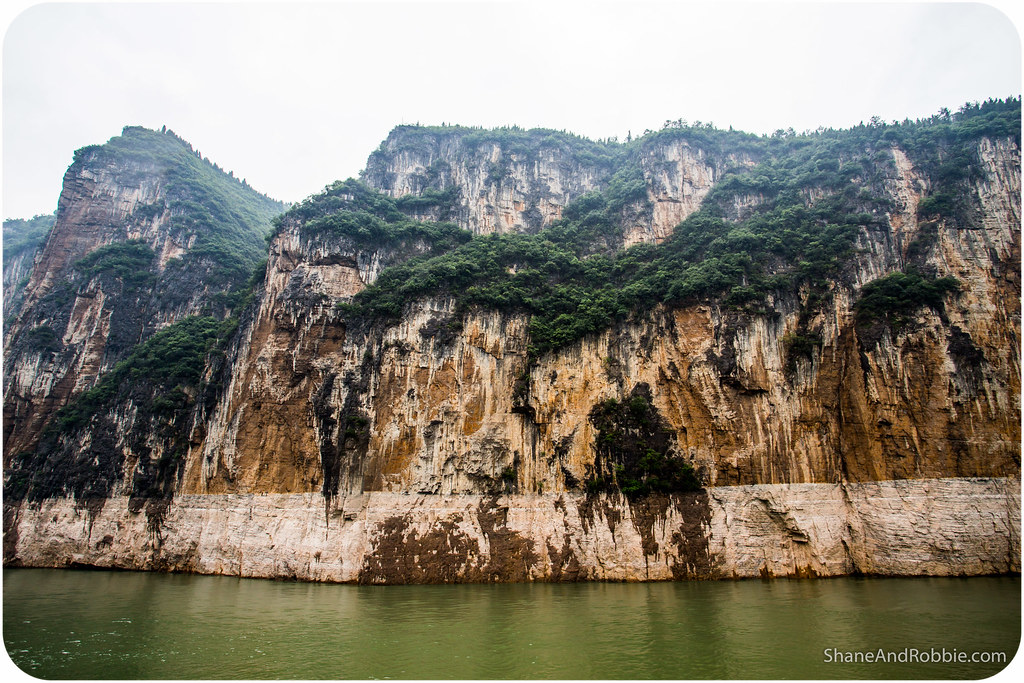 Before the building of the Three Gorges Dam this was a narrow, turbulent channel that boats struggled to navigate whilst moving upstream. To help boats get through Qutang Gorge there used to be men working in teams that physically hauled boats upstream using tow ropes. These haulers walked along very narrow footpaths carved into the cliffs at the edge of the river. The cliff-side walkways once used by these human haulers have been submerged as the river level here rose by more than 80m when the dam was built. All the extra water has also made the river run smoother and far more gently, making the haulers’ jobs redundant anyway. 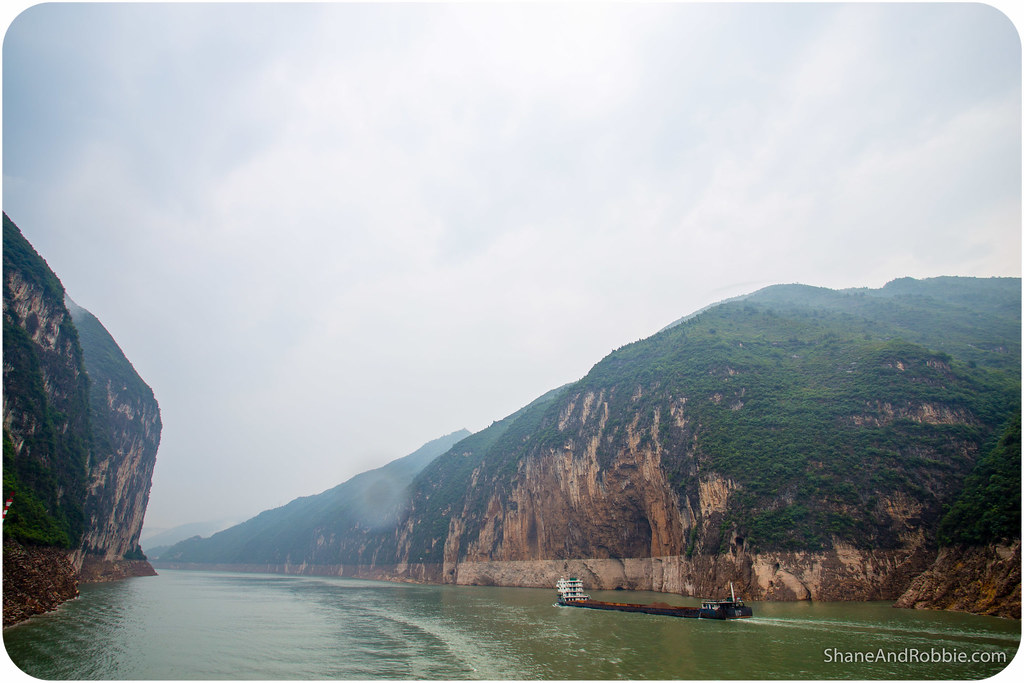 We passed through Qutang Gorge this morning, and by lunchtime had made our way into the second of the three gorges: Wu Gorge. It took us more than 2 hours to navigate our way through this 45km long stretch of the Yangtze. Carved out of the Wu Mountains, this gorge is a little less steep than Qutang and was once home to the Tujai people. 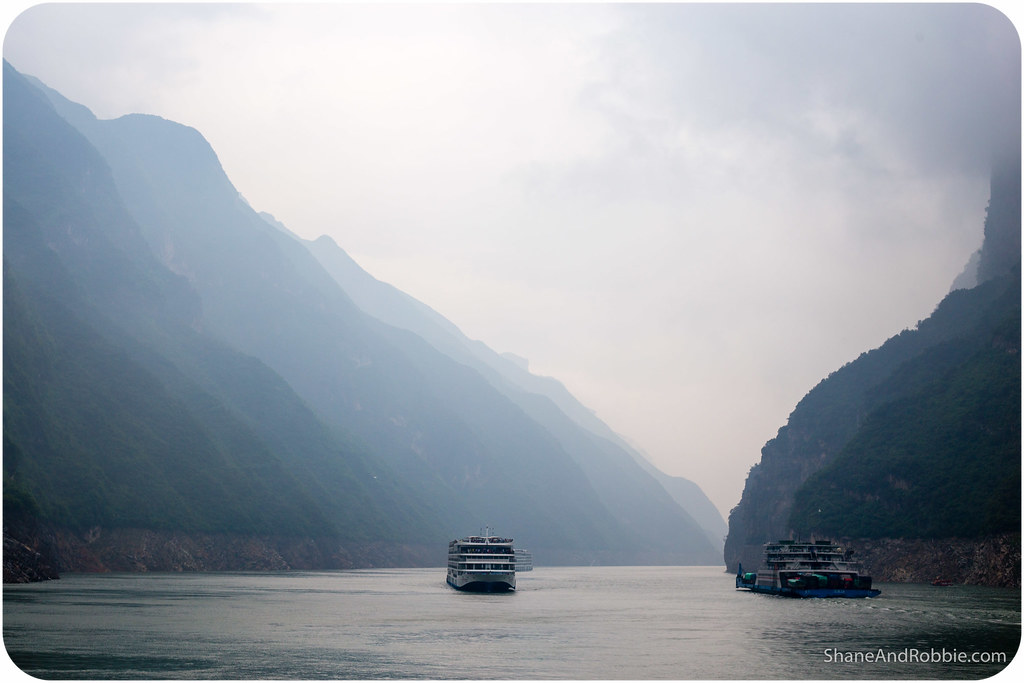 When the Three Gorges Dam was built numerous Tujai villages were flooded and its inhabitants relocated – some to new villages built further up the hillsides, many to big cities many miles away. It’s sad to think of entire populations of people displaced in this way, especially when the new villages built are made up of ugly, Stalinist concrete buildings. The newly constructed buildings sit awkwardly in this beautiful verdant landscape, creating a jarring visual contrast to the rocky landscape, farms and forest. We can only hope the villagers that live here find their new homes comfortable. 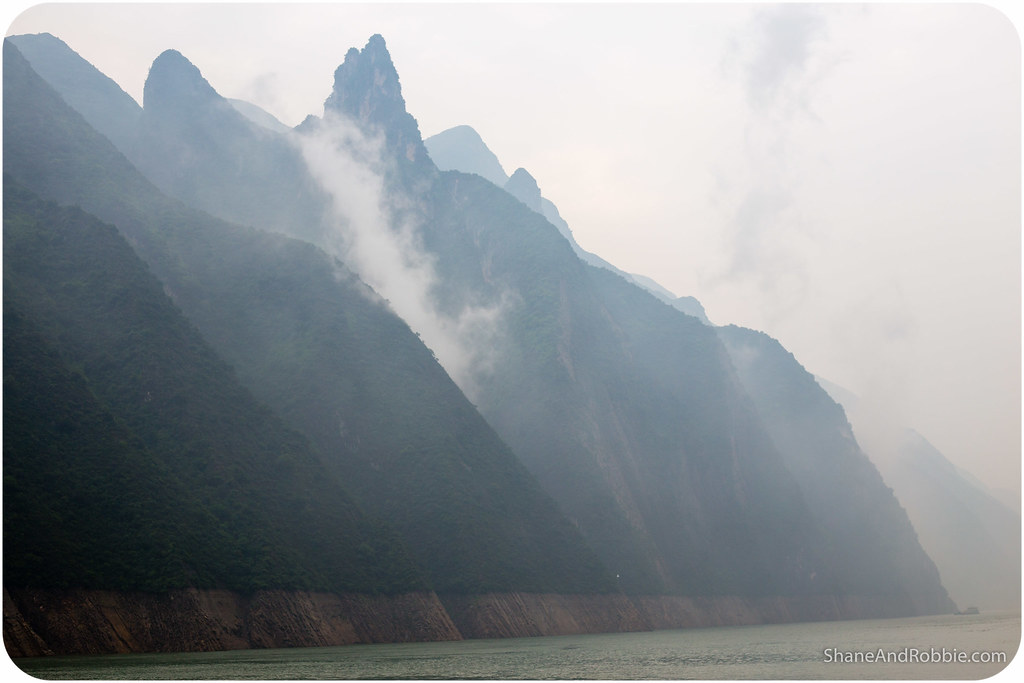 The best part of the day was when we stopped to visit Goddess Stream, a tiny tributary that feeds into the Yangtze. This stream runs through its own mini-gorge that we got to explore in smaller boats. 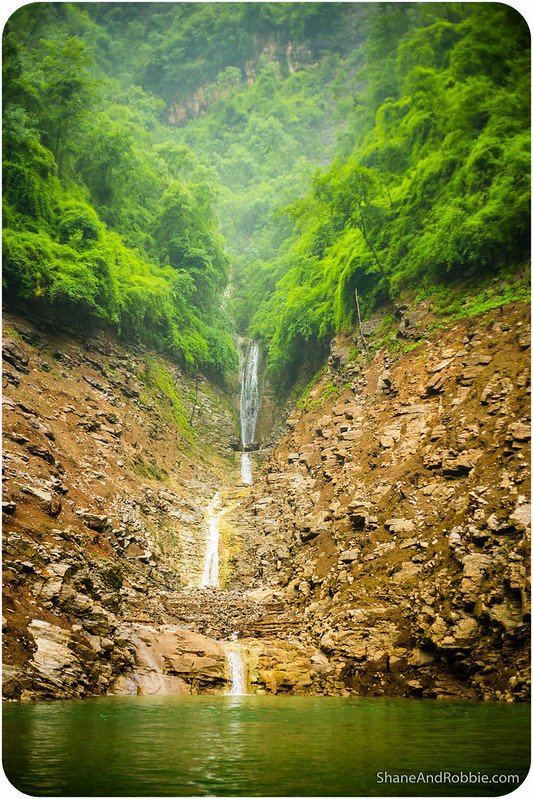 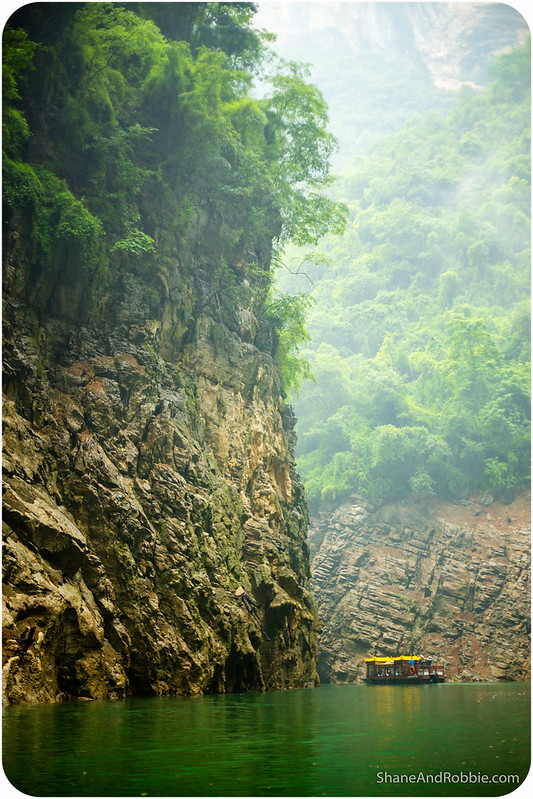 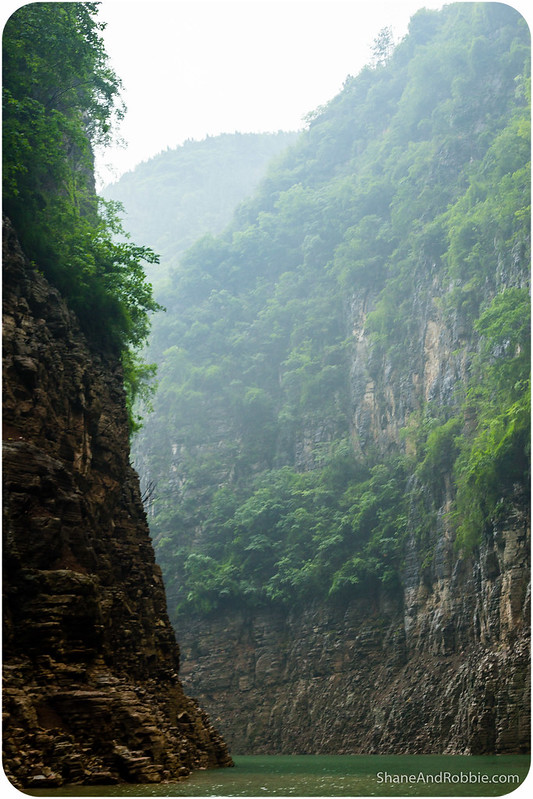 Even though the scale of the Goddess Stream Gorge was far smaller than the Three Gorges, the fact that we could get so much closer to the hillsides (the gorge was only 10-20m wide) gave us a great view of the rocks, the cliffs, and the forest. 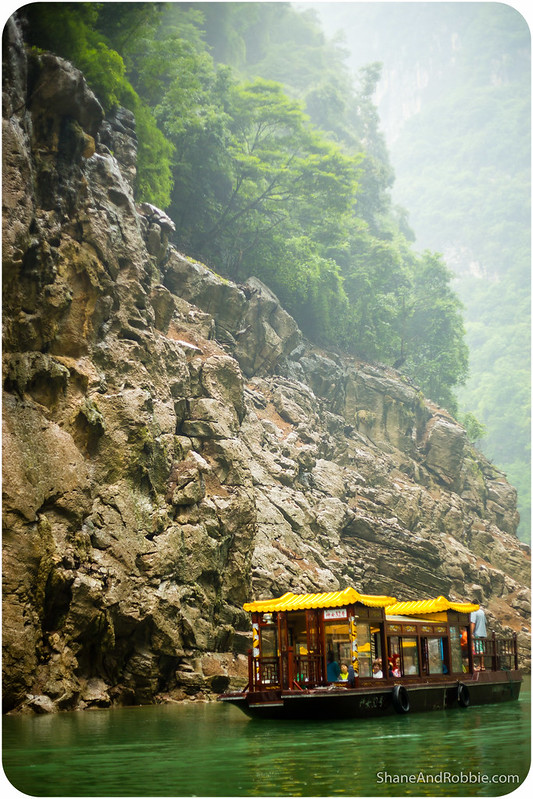 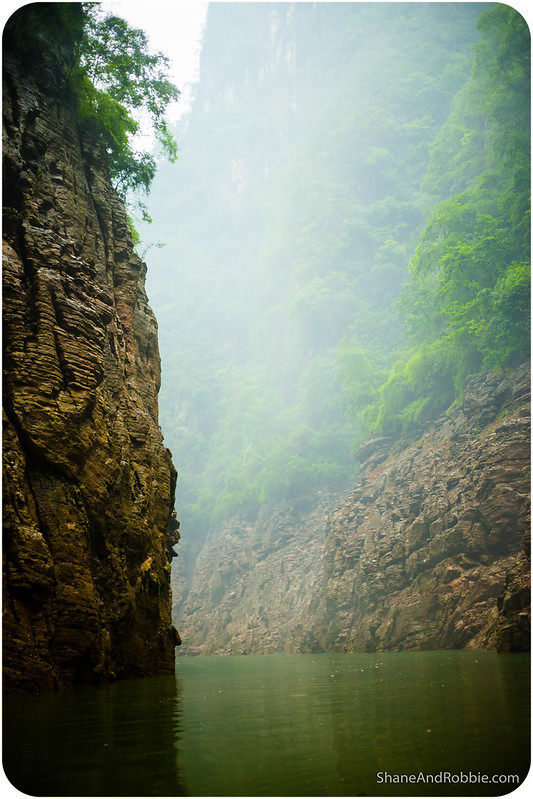 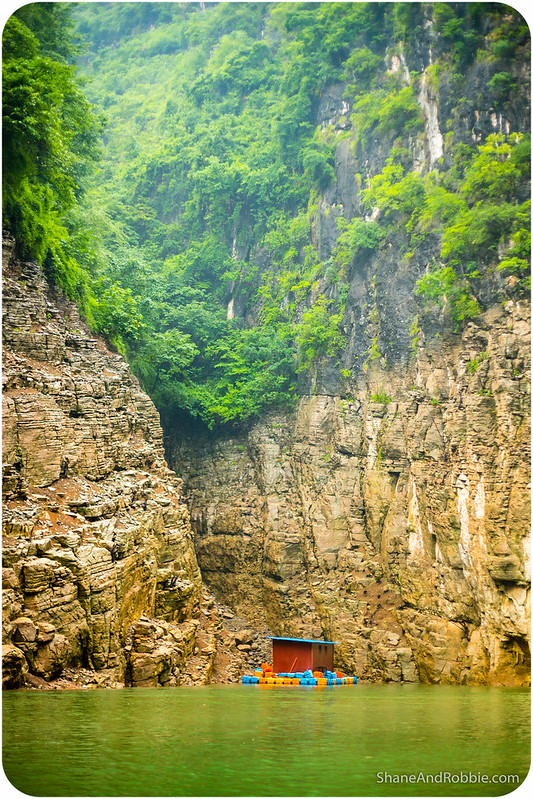 Finally, as late afternoon turned to evening, we passed into Xiling Gorge. This gorge, originally 66km long, was divided by the recently-built Three Gorges Dam. With water levels now more than 100m higher than they used to be, this once treacherous channel is now a wide, sedate stretch of water. The waters from the Three Gorges Dam have flooded most of the historical sights and interesting features of Xiling Gorge, as a result Xiling today is not nearly as spectacular or interesting as it once must have been. 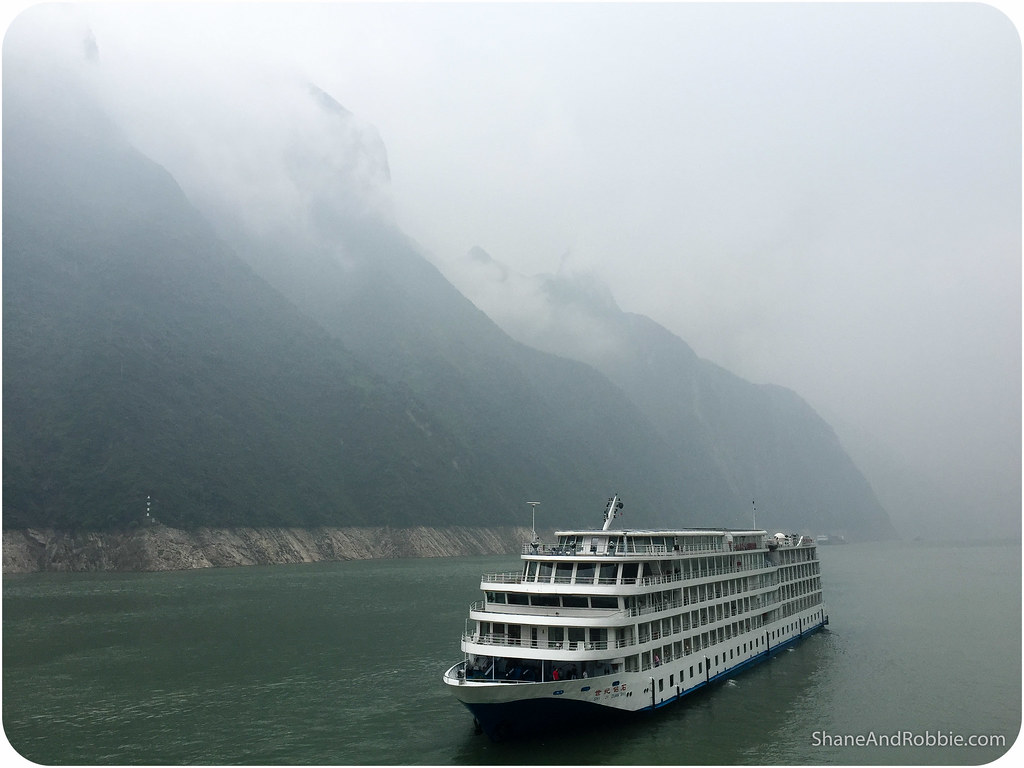 Tonight we’re making our way through the locks of the Three Gorges Dam, so that tomorrow morning we’ll find ourselves disgorged on the other side of this immense structure, near the outskirts of Yichang. It was obvious to us today that the Three Gorges Dam has had a tremendous impact on the landscape and the people of this area. As the largest hydroelectric dam in the world, this project has indubitably also helped China is many ways as well (and will continue to do so for decades). No doubt we’ll learn more about the dam tomorrow when we get taken on an “excursion” to see it. For now though, bed and sleep beckon….