We arrived in Galway today and already love this vibrant, artsy city. Strolling through town today we stumbled across street performers, buskers, religious street preachers, and a whole lot of touters advertising their wares. There seem to be more pubs here than a population of 75,000 could possibly sustain, or maybe we just don’t know Galwegians well enough yet… One thing’s for sure: this is one funky town! 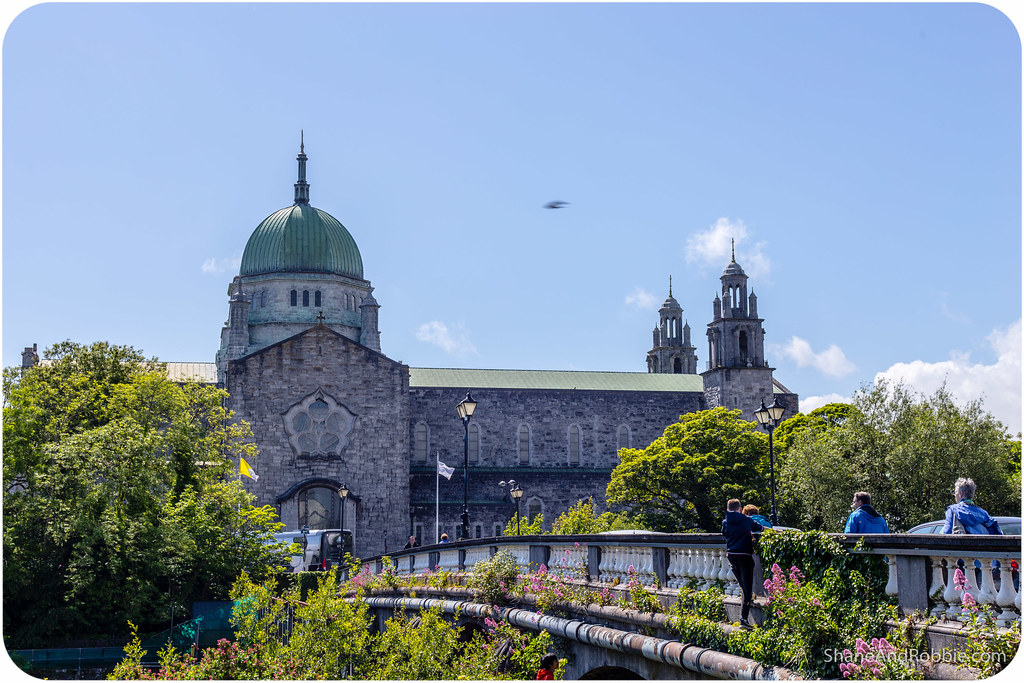 About mid-way up the western side of Ireland, Galway is renowned as a party town with a real bohemian edge to it. A quarter of the population are university students and everyone seems to speak Gaelic as much as, if not in preference to, English. Steeped in history, the city started out a small fishing village located where the River Corrib meets the Atlantic Ocean. It later became a walled town in the year 1232 after the territory was captured by the Normans. We saw the last remaining section of the of town walls today as we went exploring around town. 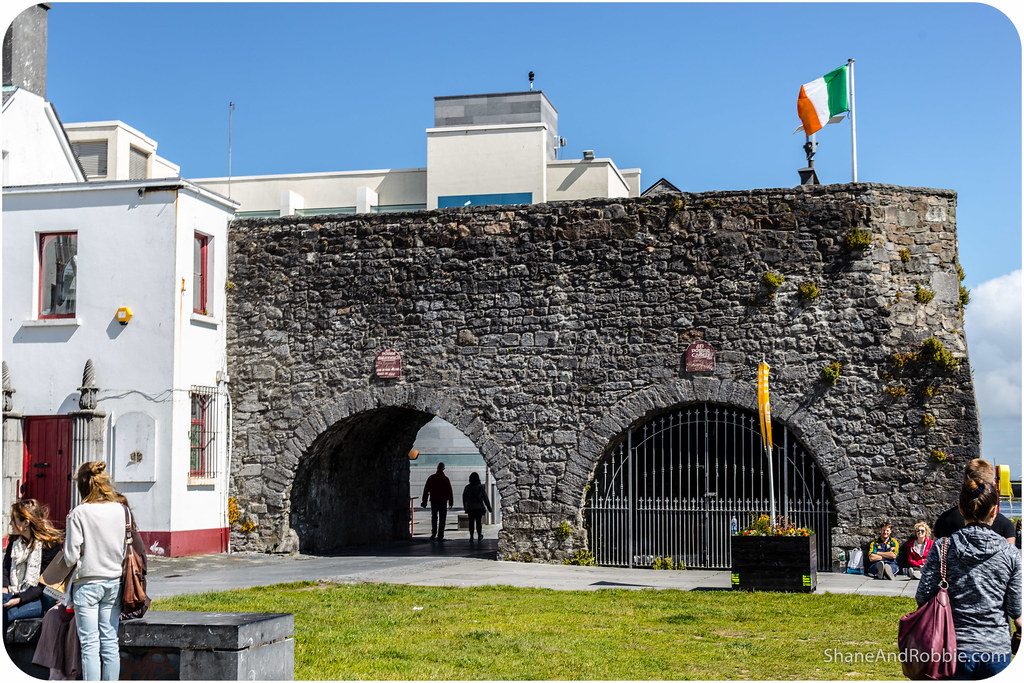 Nearby we got to see Galway Bay under beautiful blue skies. The tide was out when we were there, but with the tide in big ships can come all the way in to harbour. The shelter of Galway’s harbour has been used by ships for centuries; during the 16th and 17th centuries this was the busiest harbour if Ireland, ferrying wool out to England, The Netherlands and Belgium and bringing imported goods in from Spain and Portugal. 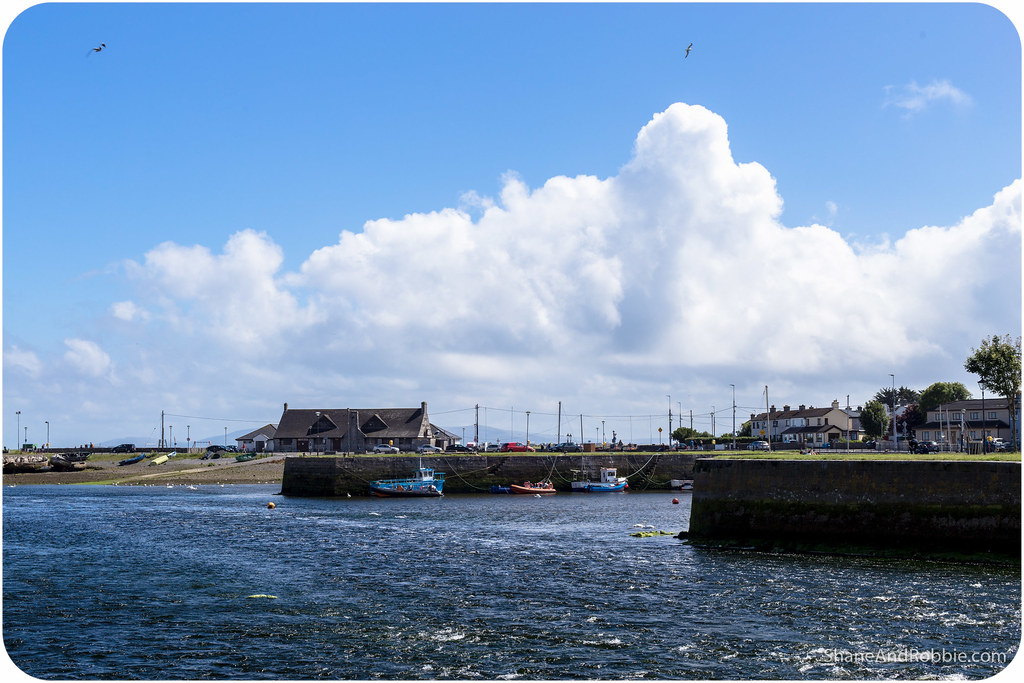 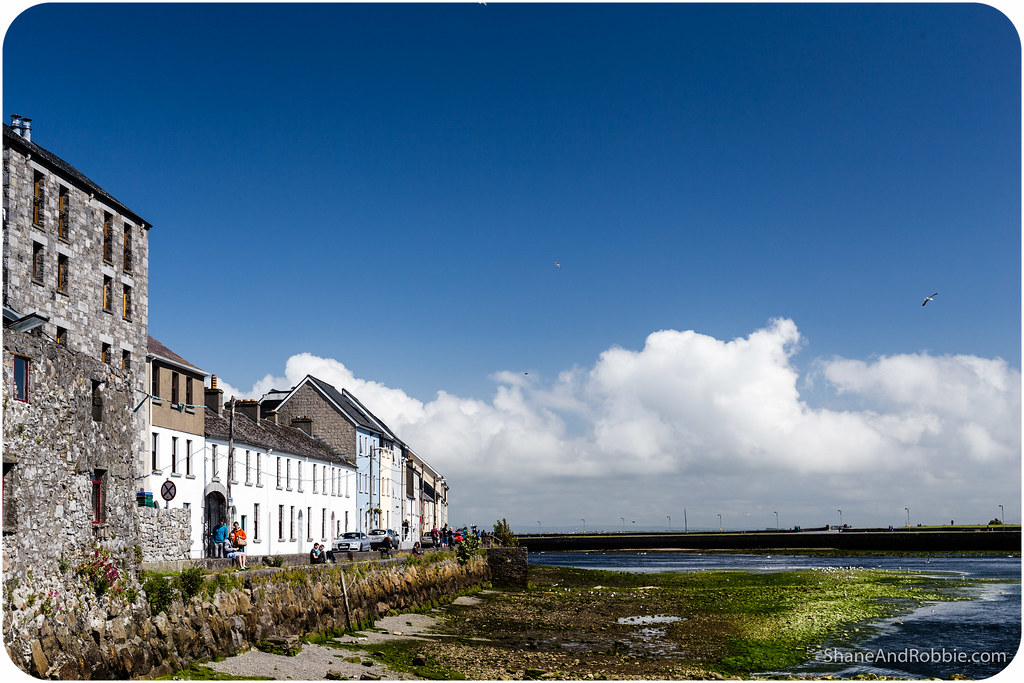 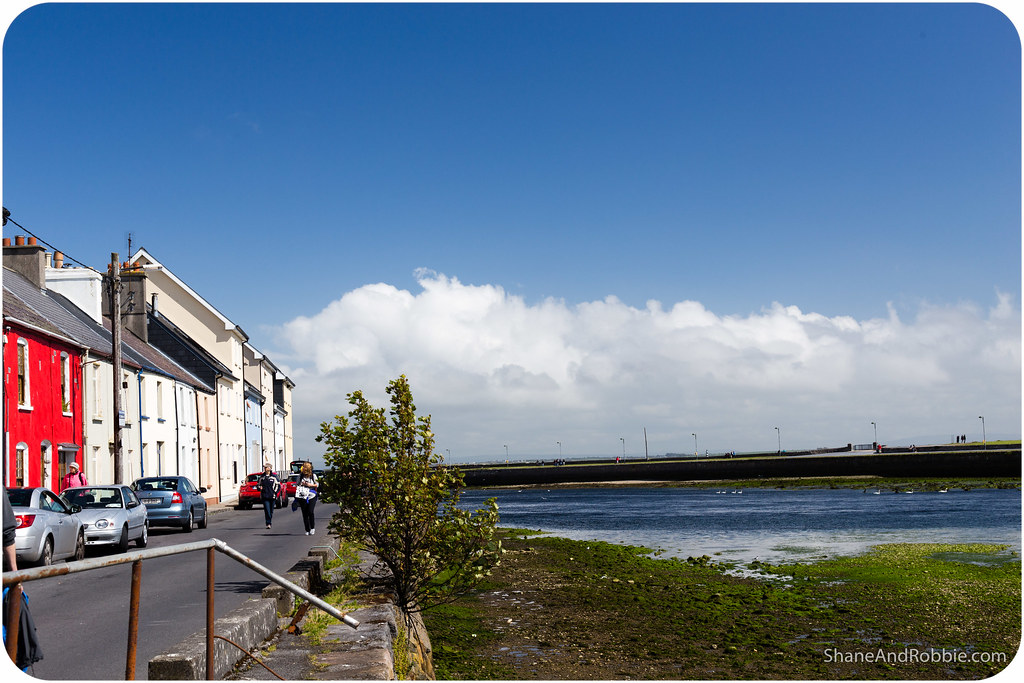 Unique amongst Irish cities Galway was actually run by 14 merchant families for many years. A charter was granted in 1396 by Richard II which transferred governing powers to these families, known locally as the 14 tribes of Galway. Under their rule the city prospered for centuries and many great buildings constructed. Including the Church of St Nicholas which was dedicated to Saint Nicholas of Myra, the patron saint of seafarers, in recognition of Galway’s status as a port. 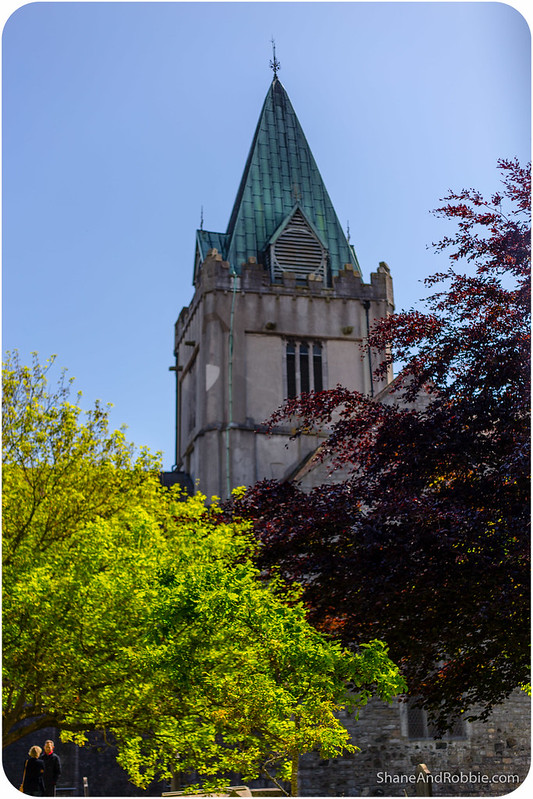 However in 1651 with the arrival of Oliver Cromwell and his puritanical Protestant English forces the region entered a long period of decline. The city did not fully recover economically until the great Irish economic boom of the late twentieth century. Now it’s home to 2 universities, numerous IT companies and manufacturing plants. Despite the boom it hasn’t lost its character or soul, however. The city was a joy to explore with its busy cobbled streets, colourful shop facades and busy café culture. 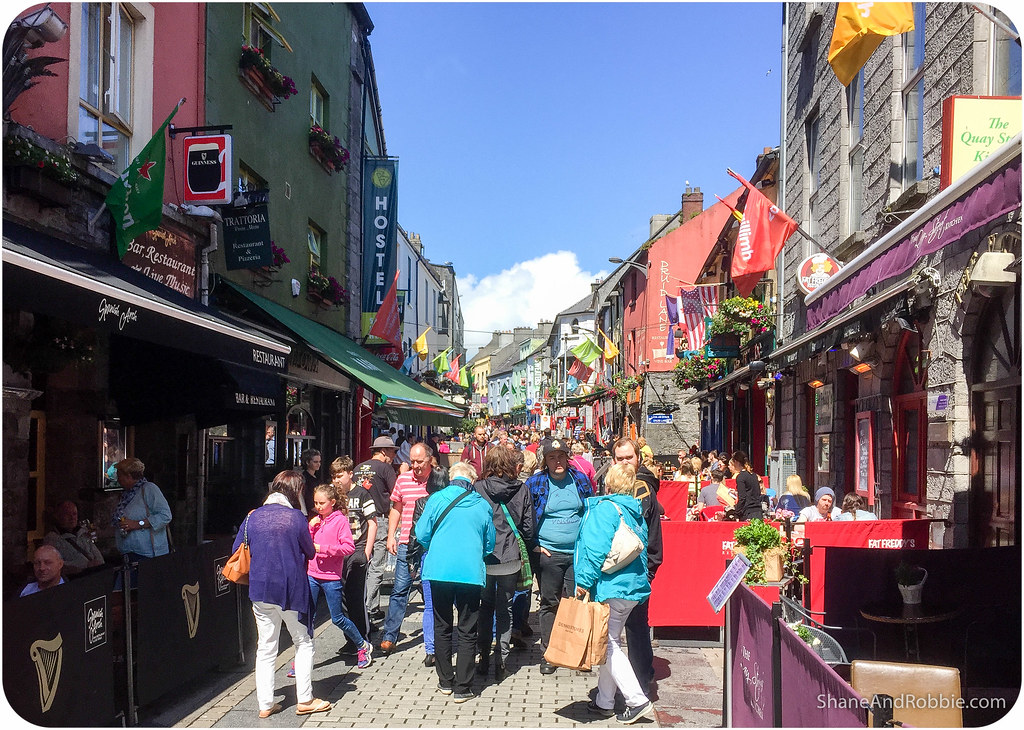 We walked along the River Corrib which, at only 6km in length, is Ireland’s shortest river. Strolling along the promenade we saw lots of ducks and swans, and Galway’s cathedral in the distance. 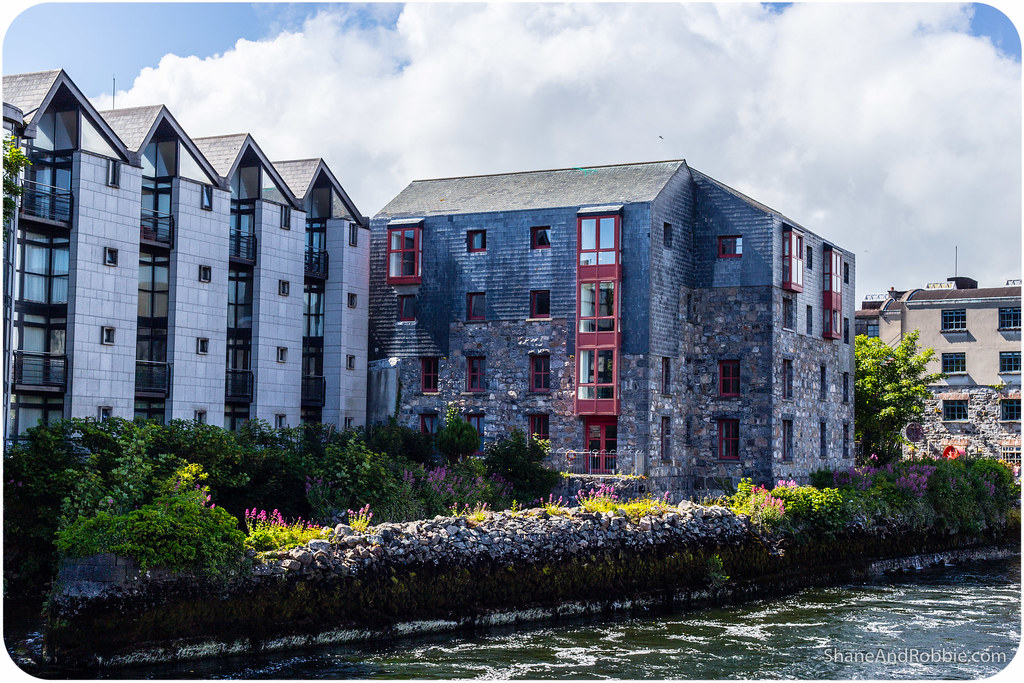 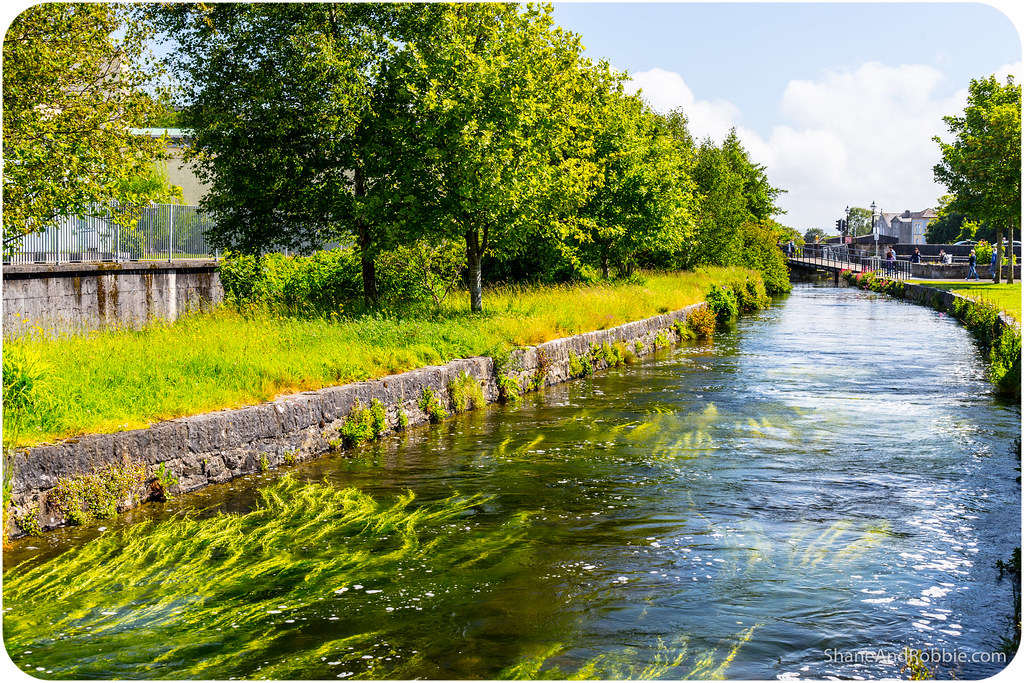 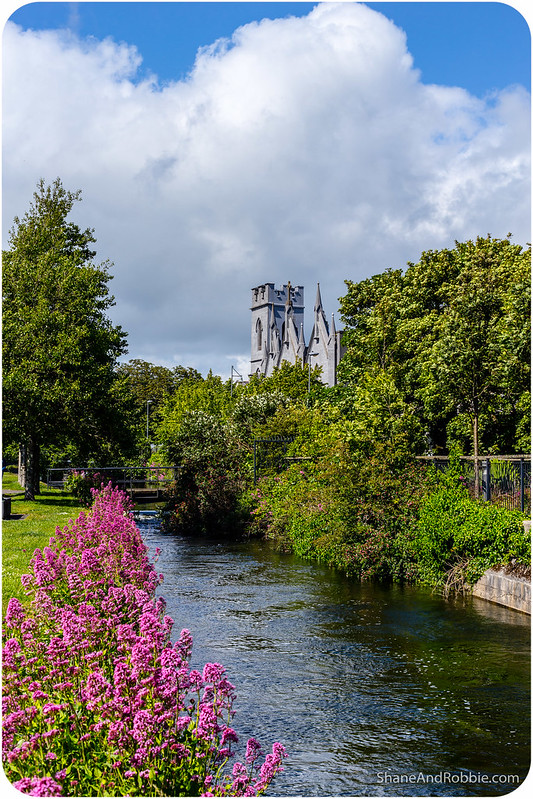 The Cathedral of Our Lady Assumed into Heave, commonly known as Galway Cathedral, is quite new as far as European churches go – it was only built in 1958 on the site of the old city prison. It’s an impressive building with beautiful stained glass windows. 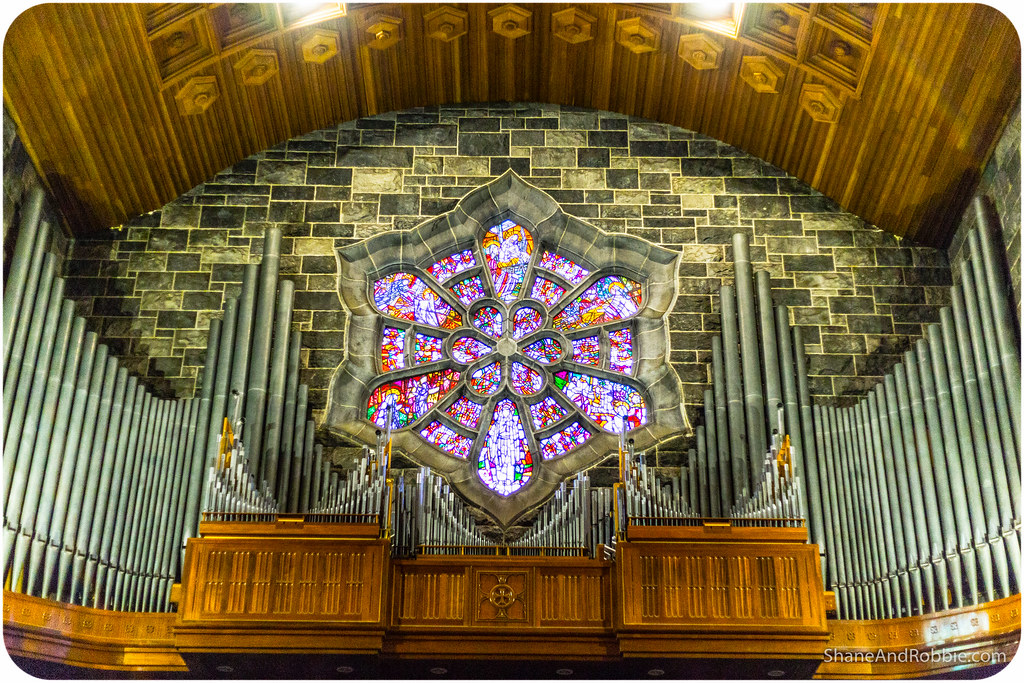 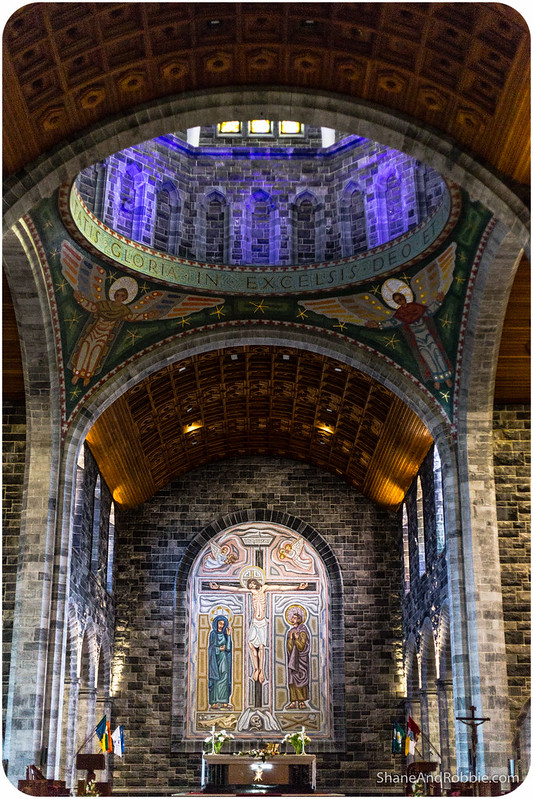 Just near the cathedral we came across some gentlemen up to their thighs in the icy river water, fly fishing by the Salmon Weir Bridge. At this point the river cascades down a great weir which controls the water levels above it without impeding salmon from swimming upstream during their spawning season (which happens to be now – hence the fishermen). 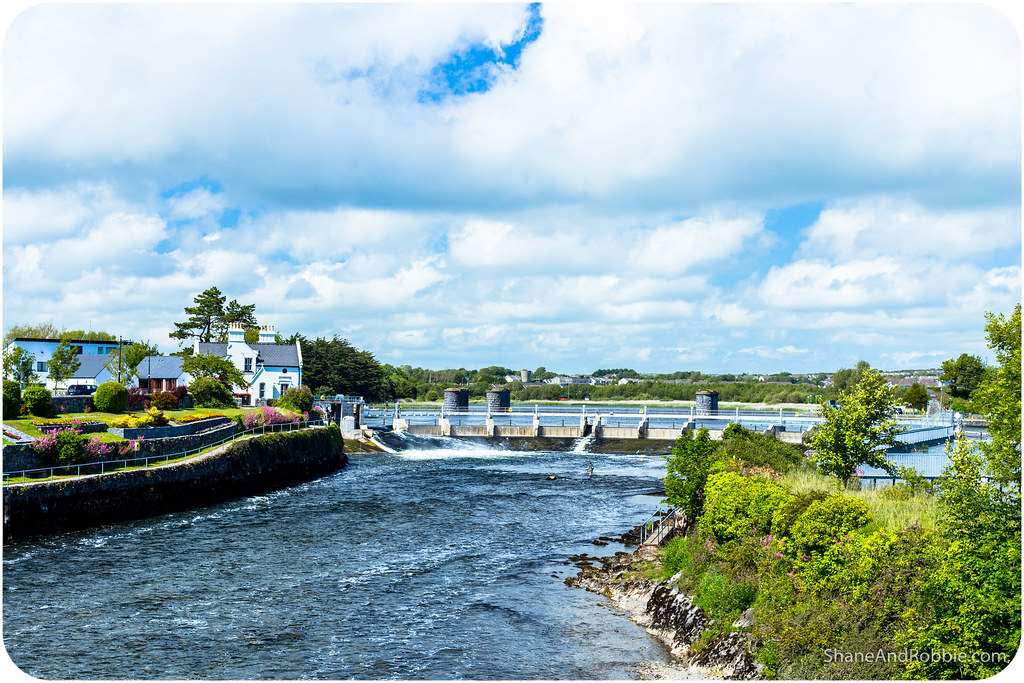 Having explored a fair bit of the city, we found ourselves in a warm café enjoying a pot of tea with scones. Whilst we were there we overheard some people talking about a show that was on tonight – a show featuring some of Galway’s best traditional Irish music performers. Our interest was piqued so we went over the theatre to see if any tickets were left turns out they had 2 to spare. Perfect! 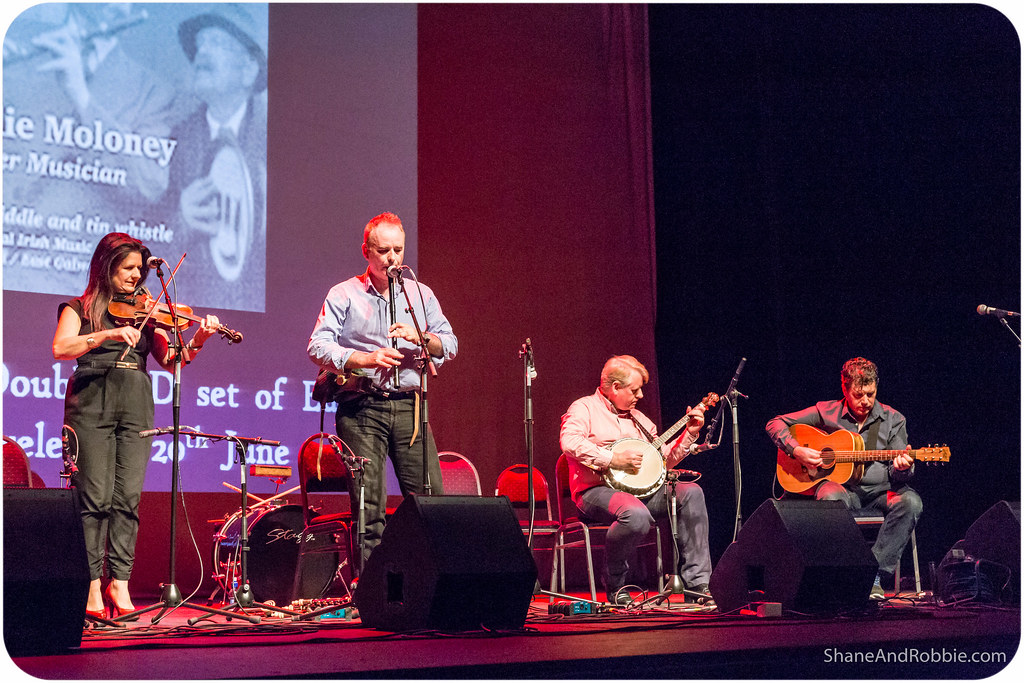 Traditional Irish folk music (referred to locally just as “trad”) is EVERYWHERE. We’ve stumbled across live trad sessions in many of the pubs around the country. Often it’s just a few guys with a fiddle, a flute, a banjo, and maybe a guitar or bodhrán (traditional Irish drum). Occasionally someone sings, but often it’s just the music*. And it’s always good fun, so we jumped at the opportunity to see a whole lot of performers on stage in one show!
*Historically singers of Irish foil music sang unaccompanied whilst music was played to dance to or just for the sheer pleasure of it. Combining music and singing only began in the 20th century. 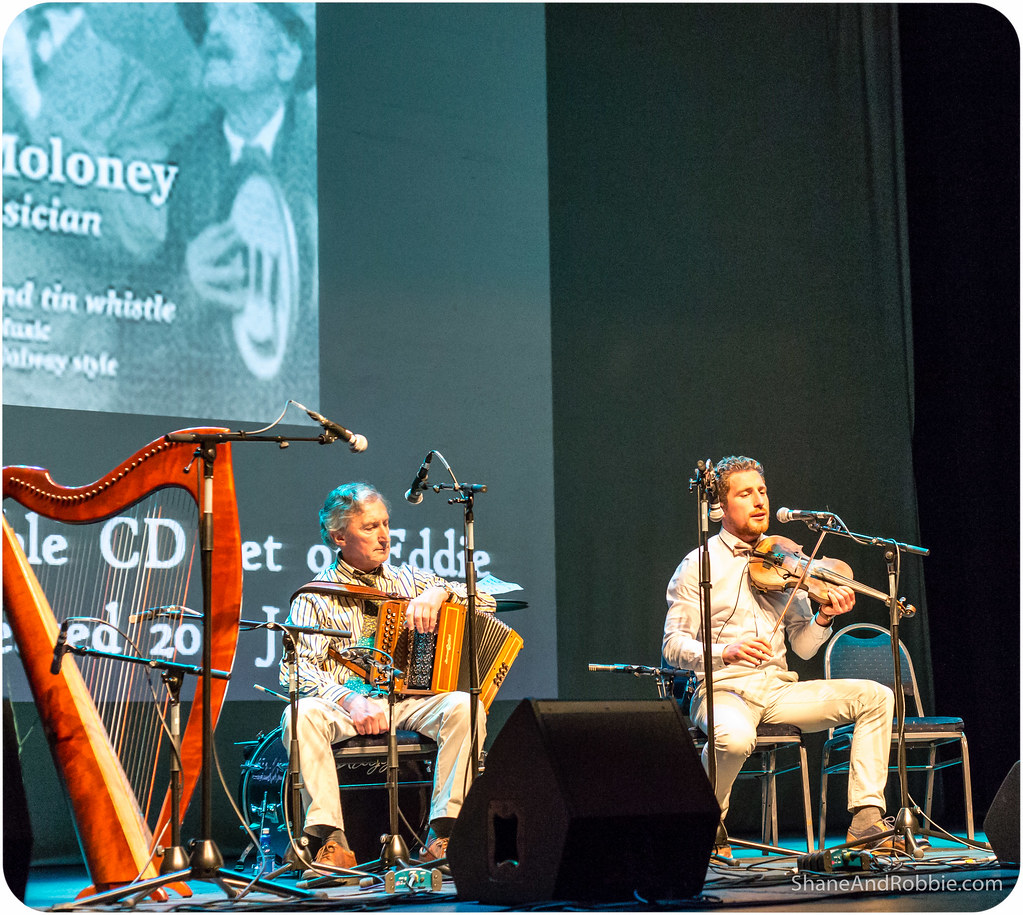 We’re so glad we did – the show was AWESOME! There were fiddles, banjos, guitars, flutes, pin-whistles, bodhráns, a set of Irish bagpipes, a harp, and the human voice. The 25 musicians who entertained us played jigs, fast-paced reals, and poignant laments. Best of all, they seemed to be having a blast doing it! 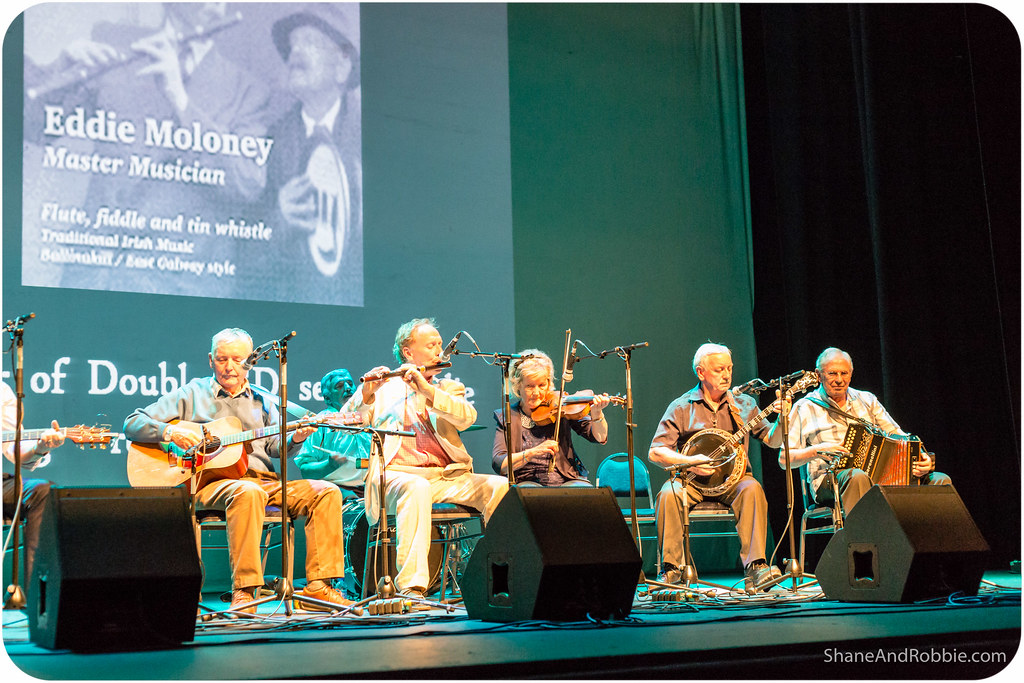 Add in a hearty meal of fresh local Atlantic salmon and seafood chowder and we can happily say that our first day in Galway was a resounding success. We’re here for a few days, not just to enjoy the town, but to explore the sights around it. Starting tomorrow with a visit to Ireland’s most visited natural wonder: the Cliffs of Moher! 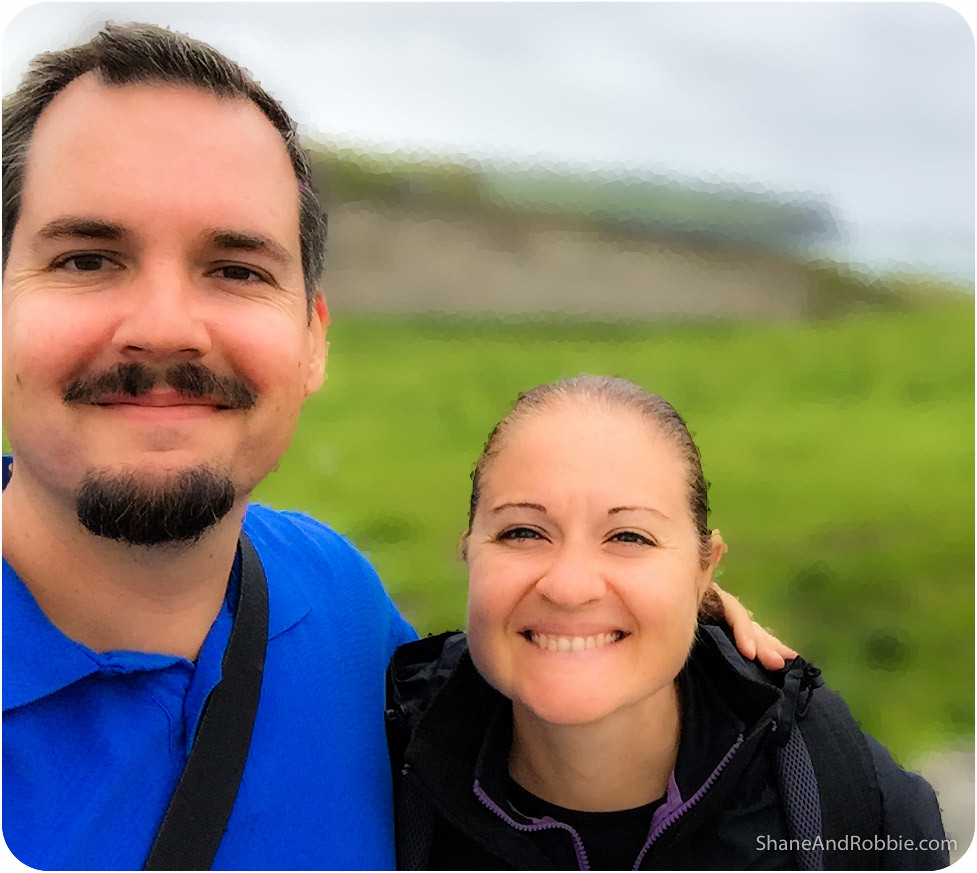