THE LONG WAY ROUND – ULLAPOOL TO LOCH ALSH

We started our road trip in Fort William, went across to Inverness, then up to Thurso, and back down to Ullapool yesterday. Today we continued southwards, down the western Highland roads to Loch Alsh. There are a couple of different ways you can do this journey; the shorter route is to cut inland and go through the farmlands in the middle. We went the long way round: all the way around the outside, hugging the coastline.

The western part of the Scottish Highlands is very mountainous and repeatedly our route today took us up into the mountains, through mountain passes and back down towards the water. The best views were often at the very top of the mountain passes, with the ocean or one of the region’s many lochs spread before us. Every time we went up in elevation the weather changed as well – crossing the mountains we were up in the clouds at times, whereas it was sunny and warm down along the coast. The weather, like the scenery, sure is variable up here! 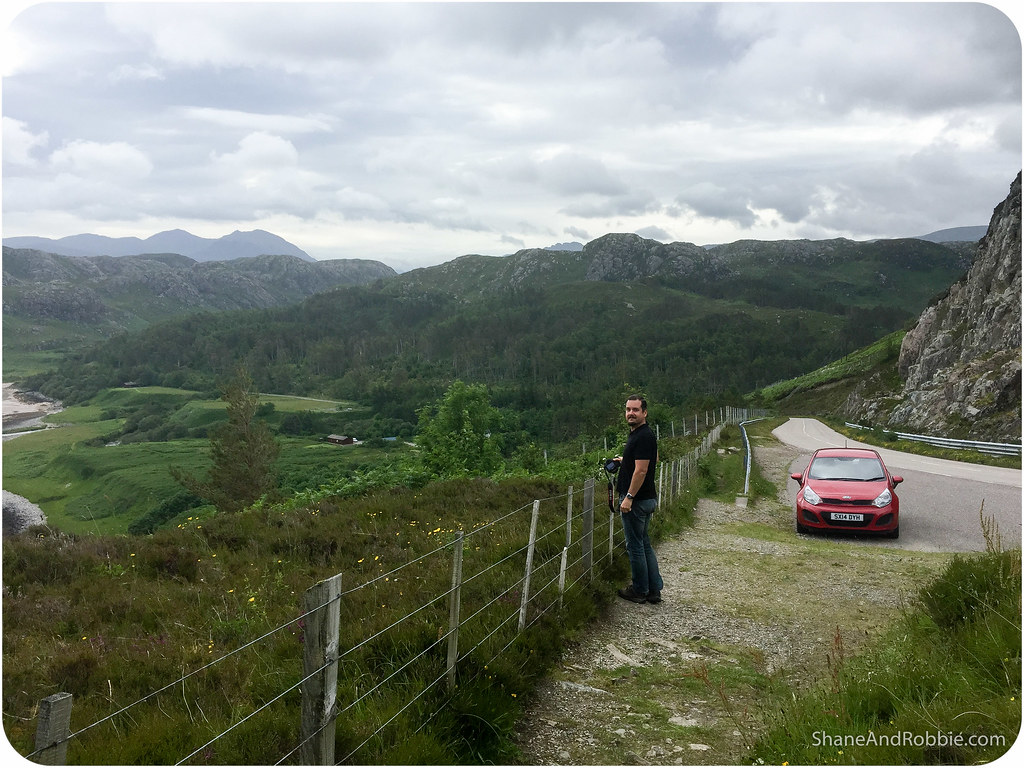 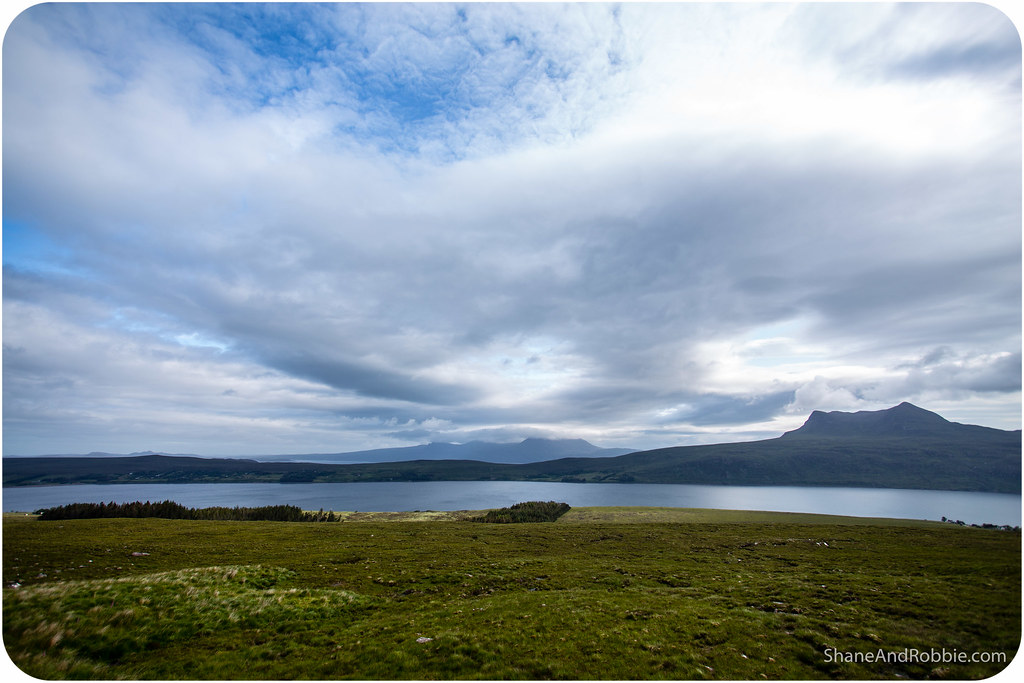 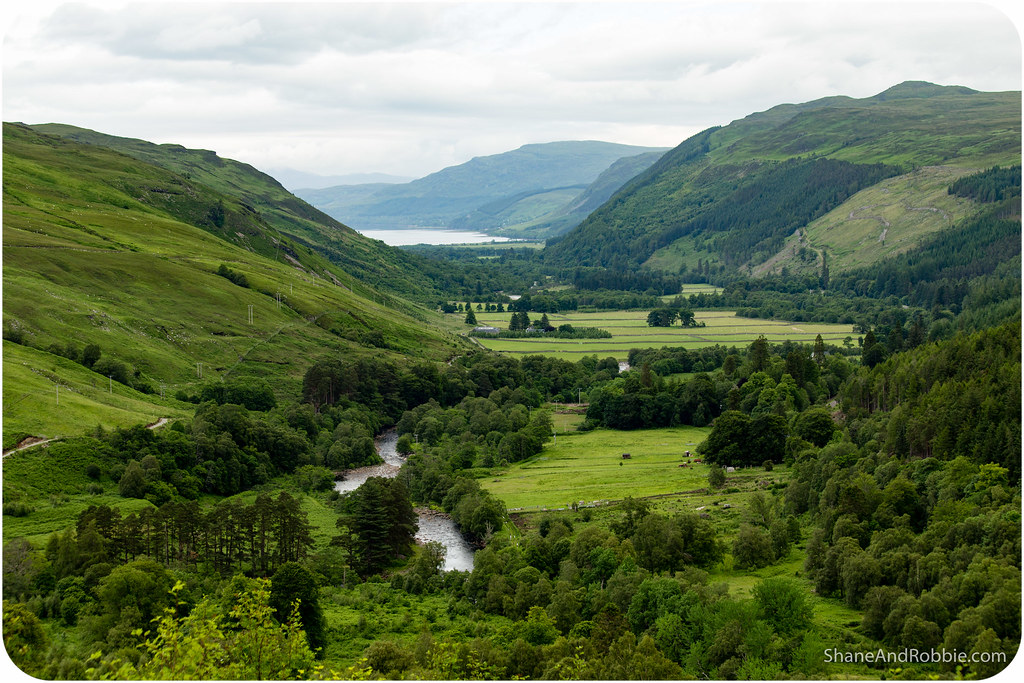 We passed through a few fishing villages along the way, including Badralloch which has a lovely beach*; Aultbea (home to Loch Ewe Distillery, the smallest whiskey distillery in the world); and Poolewe. Positioned along the banks of the River Ewe, Poolewe is a popular spot for fly fishing. We stopped there for a while to watch a couple of guys casting their lines out into the water. Neither of them caught anythng in the time we were there, but it certainly looks like a relaxing way to spend your day.

*The beaches have really taken us by surprise – who thinks of Scotland and pictures beautiful beaches?! Before this trip, not us, that’s for sure! But it turns out that the beaches are stunning; the sand is fine and clean, the water pristine (though very cold), and the ocean full of life. Pity it’s just a wee bit to cold to go swimming…. 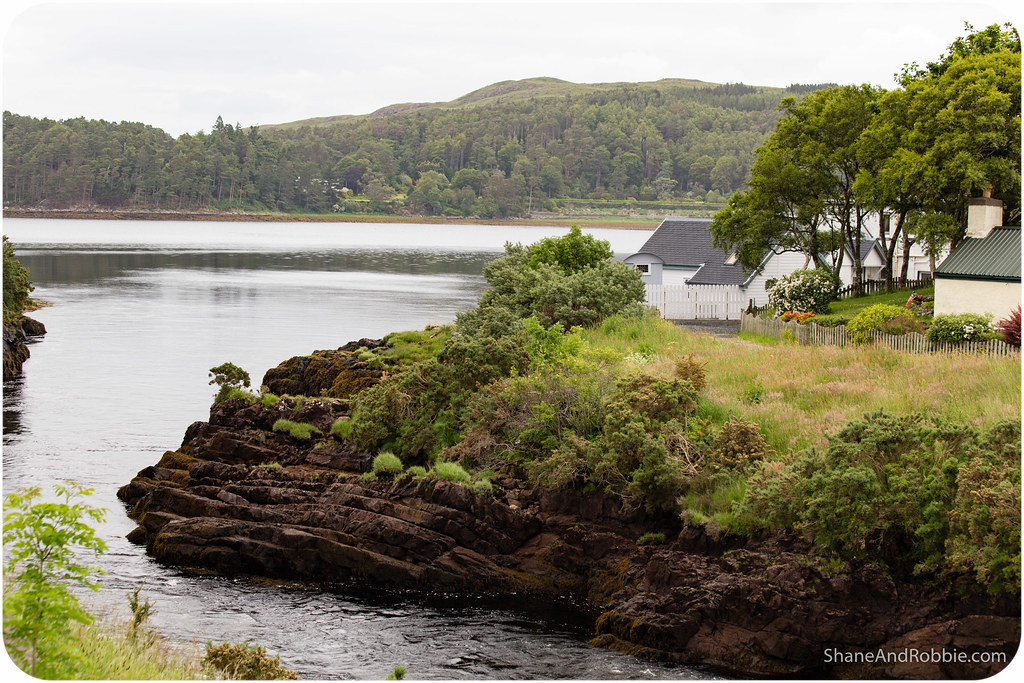 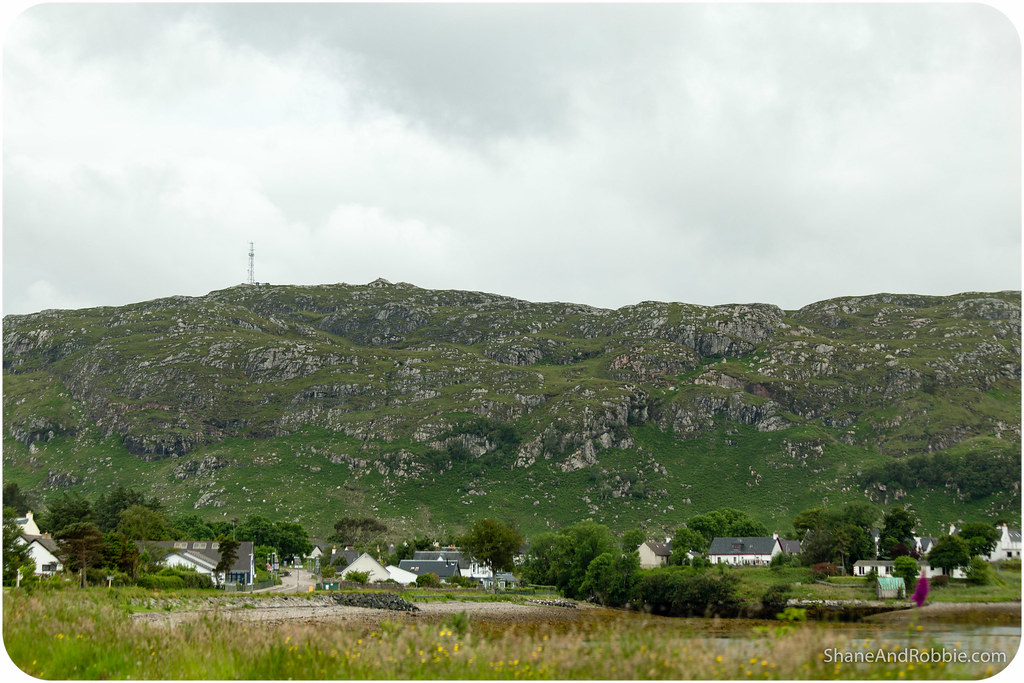 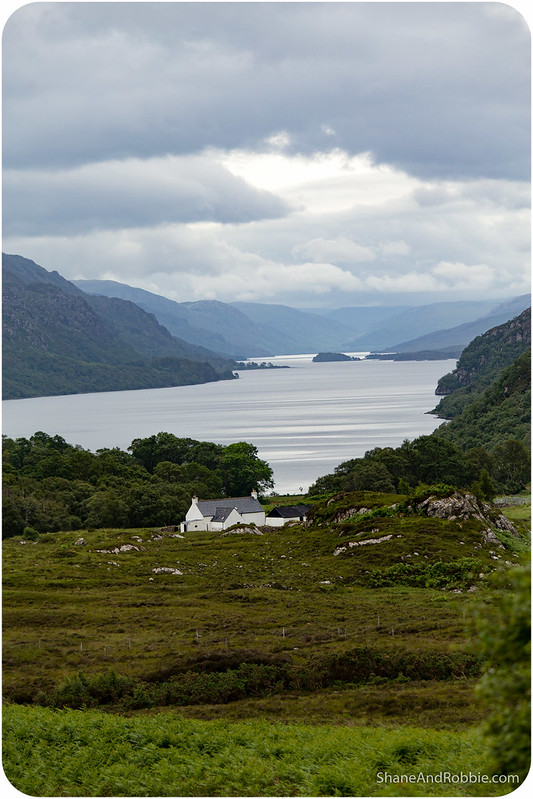 By the time we reached Gairloch we were ready for a coffee and a break, so we pulled into one of the cafes in town and dosed ourselves with a dash of caffeine whilst chatting to the owner about the town’s history. Turns out, from 1528, the lands around Gairloch were owned Clan Mackenzie. The Mackenzies were exceptional landlords, it seems, as they refused to evict a single tenant during the Highland Clearances, despite the estate running at a loss. As a result, evicted Highlanders from other communities came to live in the area. As a result Gairloch remained a thriving community even as other Highland communities were dying. Even today it’s a much bigger, busier* town than others we passed through.

*Bearing in mind that “busy” is a relative term. 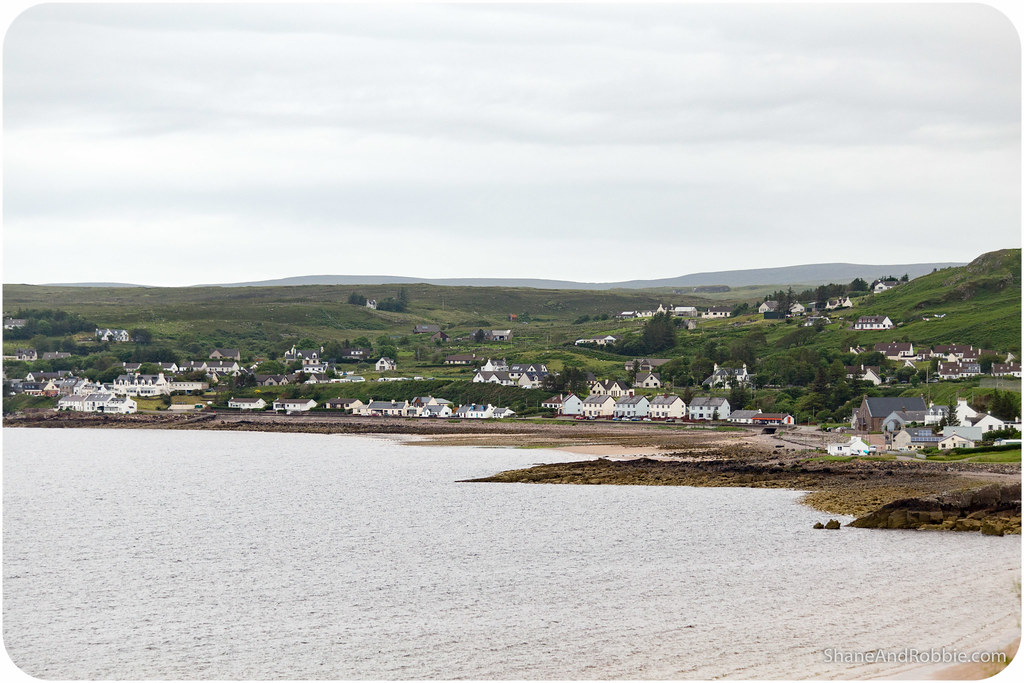 One of the highlights of our day came not long after we left Gairloch, when we rounded a bend and saw Loch Maree and the Torridon Hills before us.

Often touted as Scotland’s most beautiful lake, Loch Maree is one of the largest freshwater lakes in the country. The forests around the loch have been conserved and are full of old growth trees, some up to 800 years old. In the centre of the loch there are 5 wooded islands, one of which contains the ruins of a chapel. This is believed to be where Saint Máel Ruba lived for a number of years during the 8th century, praying and seeking enlightenment. The same island also contains ancient stands of oak and holly which have been linked with ancient Scottish druids. 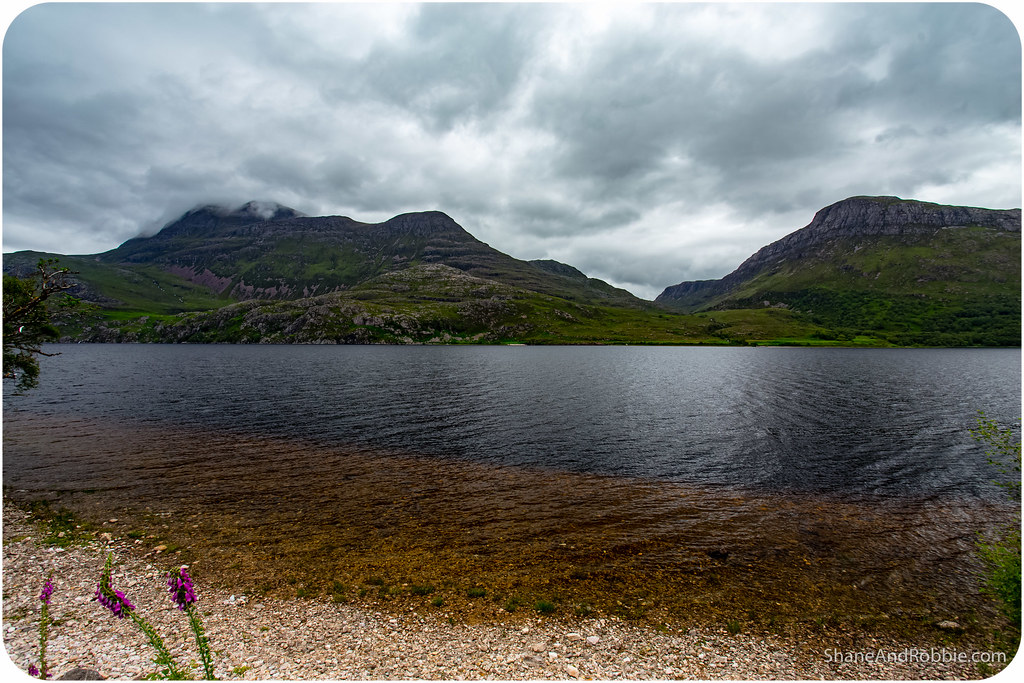 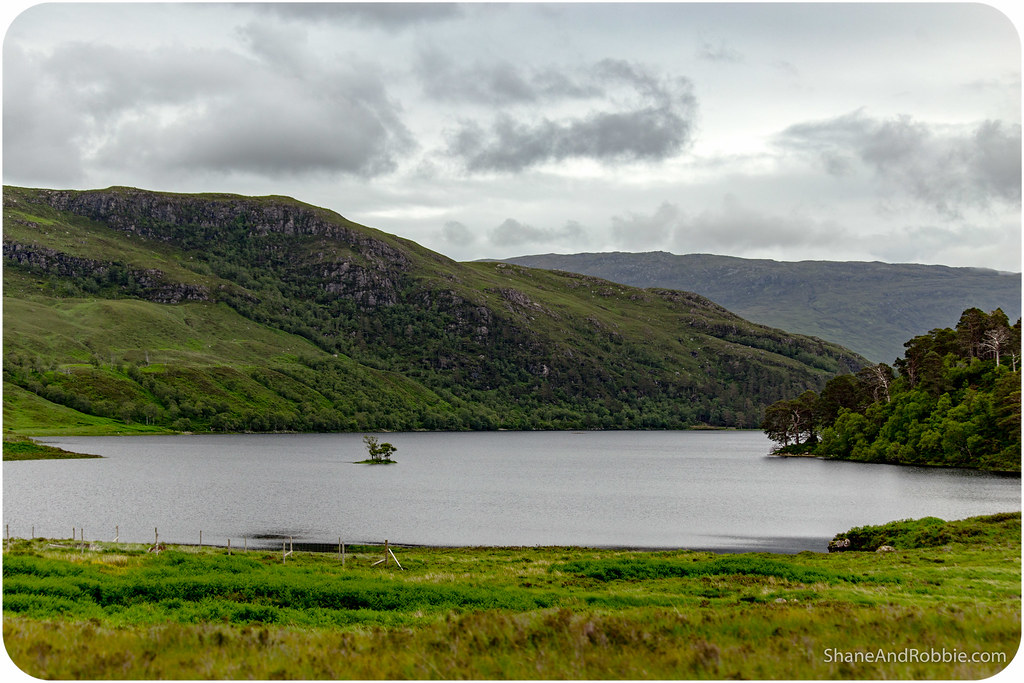 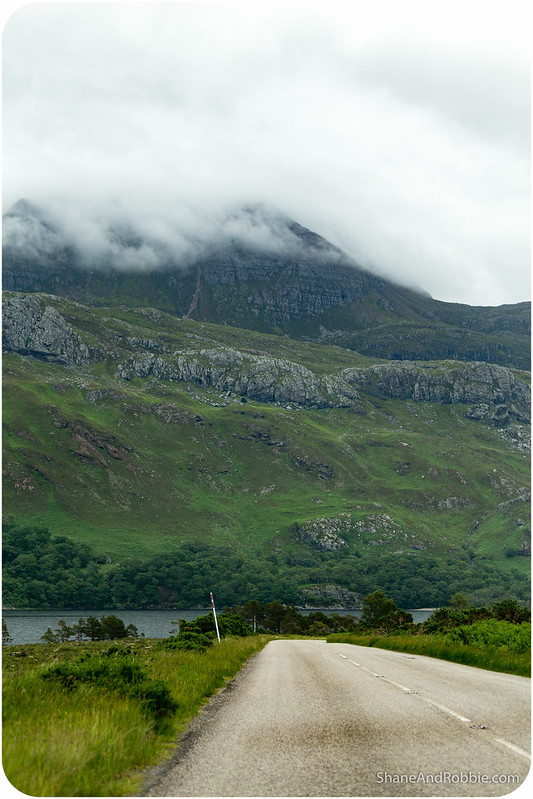 Around the loch are the Torridon Hills, a spectacular set of jagged peaks made of granite and quartzite that seemed to sparkle at time when the sun struck them. The main mountain to the west of Loch Maree is Beinn Eighe, a multi-peaked massif popular with mountain climbers and hikers. We stopped at the information centre at the base of Beinn Eighe to read a bit about the area’s geological history and see what hikes are available in the area. Little did we know: there are dozens of walks in and around Loch Maree and the Torridon Hills! You could spend a week in the area, enjoying the scenery and trekking through the hills*.

*Just bring lots of good insect repellant and all your best insect-proof clothing as the midges can be TERRIBLE here in summer. These tiny (<1mm) bugs come in giant swarms and they BITE like nothing we’ve ever experienced. A few times today stepping out of the car to enjoy a gorgeous view and take a few photos quickly turned into a made scramble back into the vehicle when swarms of these little buggers emerged to feast on our blood. There’s something they DON’T tell you in the brochure: ‘ware the Scottish midge, they can leave you covered in red welts and anaemic from blood loss! 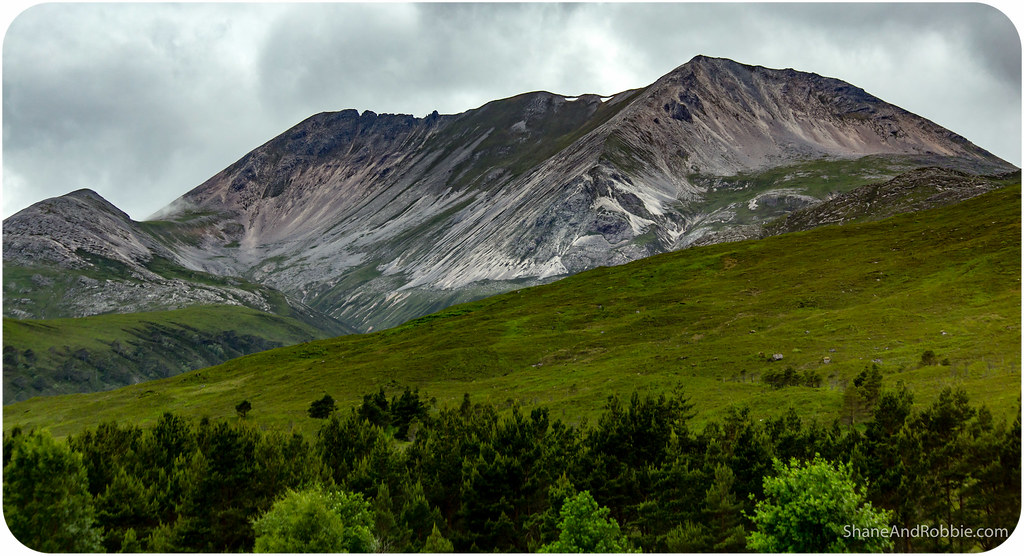 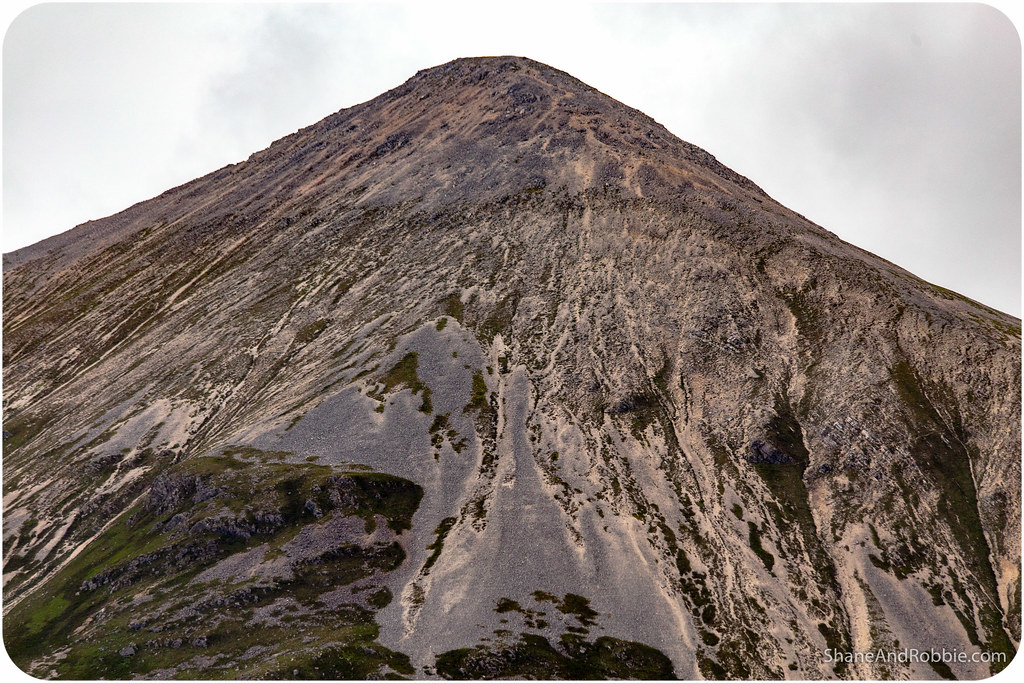 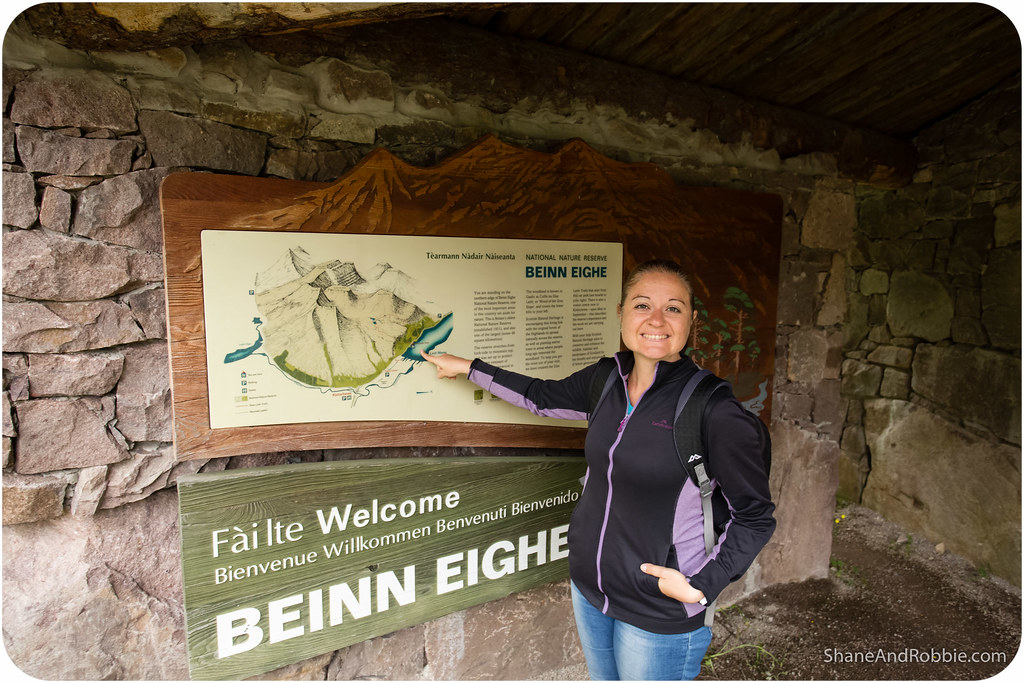 We stopped a little on in Lochcarron for lunch. This small fishing village sits at the bottom of the pass that winds through Torridon Hills. Getting down into the village means lots of winding roads and hairpin bends on single lane roads most of the way*, not great if you’re prone to car sickness or driving anxiety, but awesome for views down to Loch Carron!

*Many of the roads throughout the Sottish Highlands are single lanes with wide point every 500m or so to allow for 2 cars to fit across. Much has been written in travel blogs and forums about how treacherous and dangerous these roads can be, but really it’s just about looking ahead and pre-empting the need to stop at a passing place if there’s another car coming. Worse than the single lanes roads are the bloody sheep wandering all over the place! And they seem to think the road is THEIRS and that YOU should be getting out of THEIR way. We were playing “Dodge the Ewe” the whole day. Makes for a rather exhausting day for the driver (i.e. Shane); he was dodging the sheep, watching for oncoming traffic, enjoying the scenery, and doing the actual driving stuff all day. My job: photos. Much easier being the passenger! 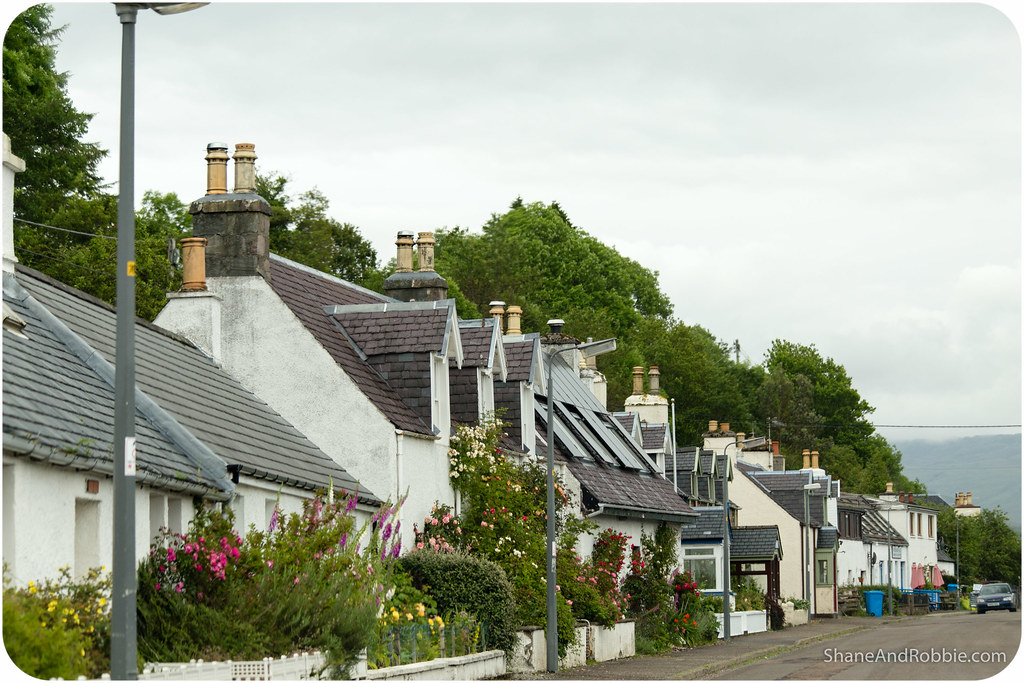 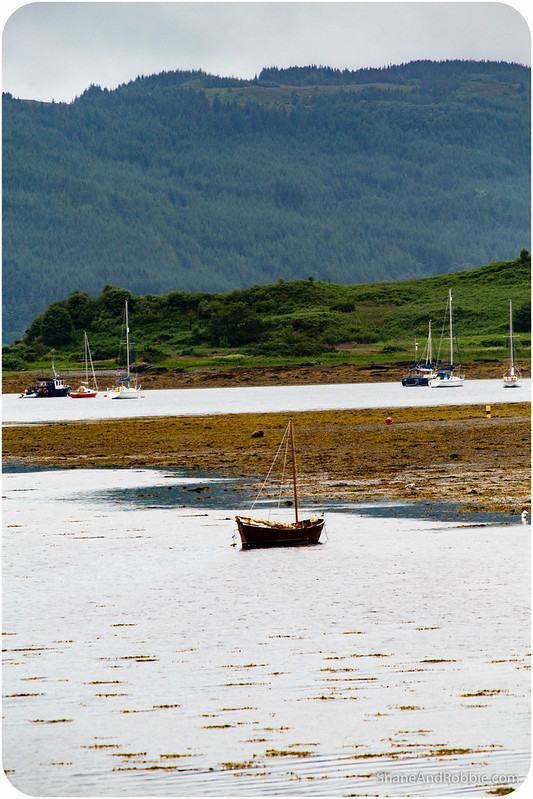 Just out of Lochcarron we stopped at the ruins of Castle Strome. Originally built by the Macdonalds in the 14th century, the castle was besieged by the Mackenzies in 1602. After the MacDonalds surrendered it was demolished and burned, and the ruins left to watch over Loch Carron. 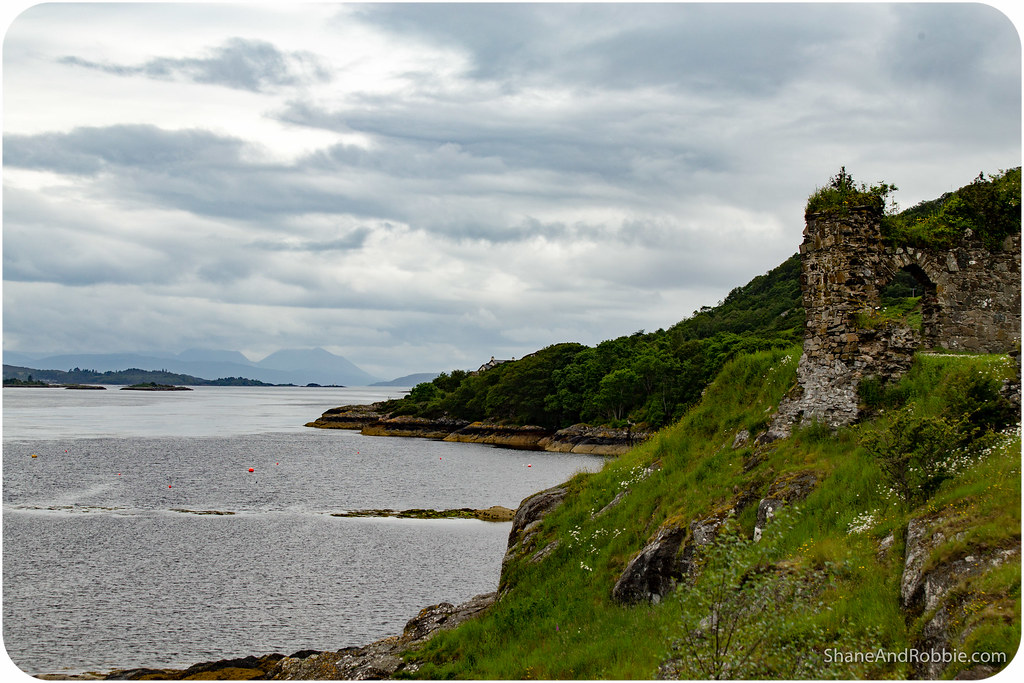 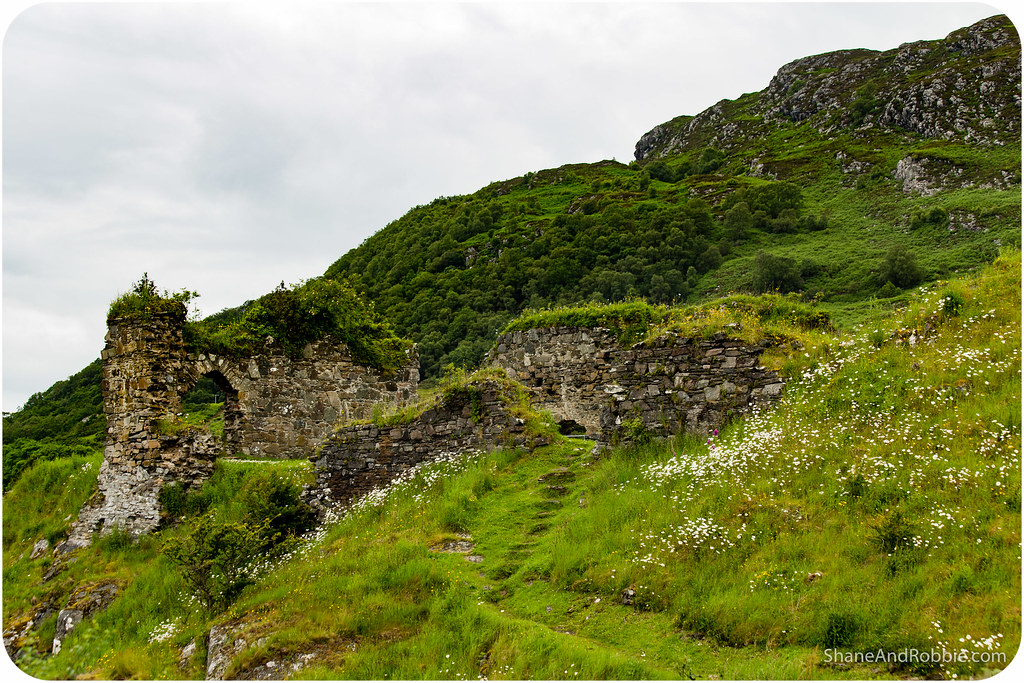 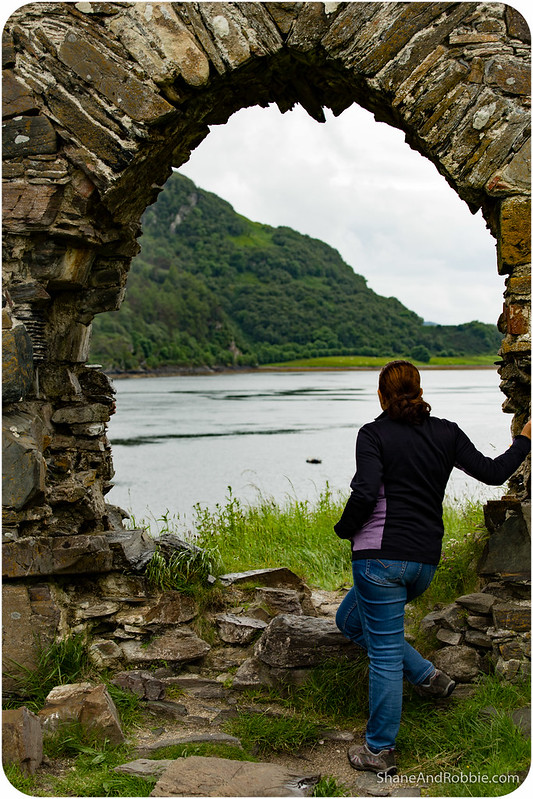 Further around Loch Carron we stopped at the village of Plockton to admire the harbour and watch for seals. 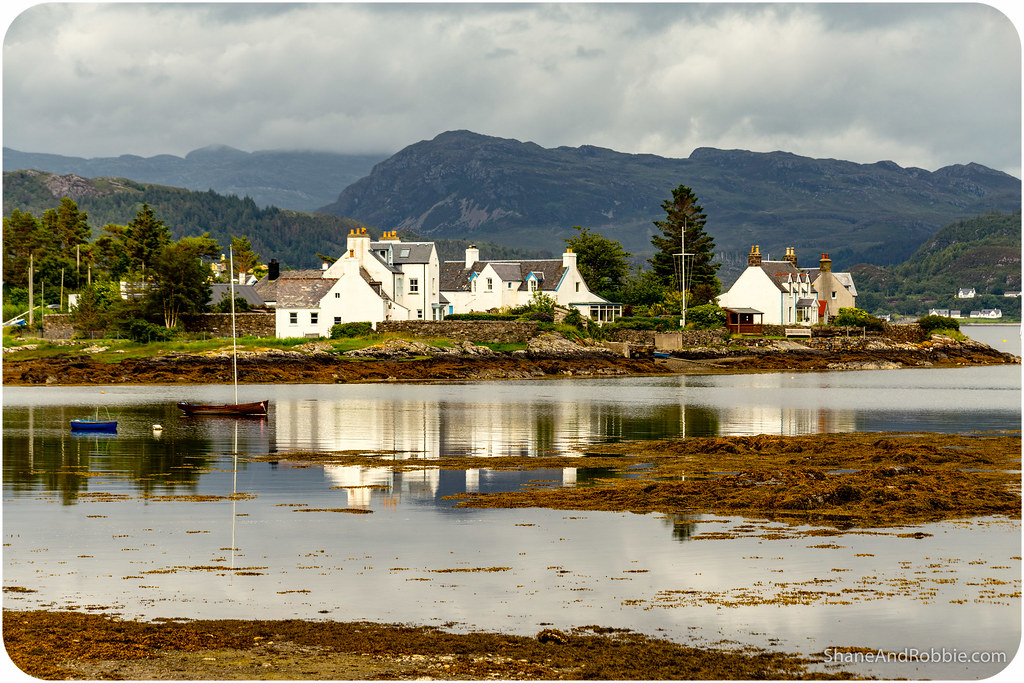 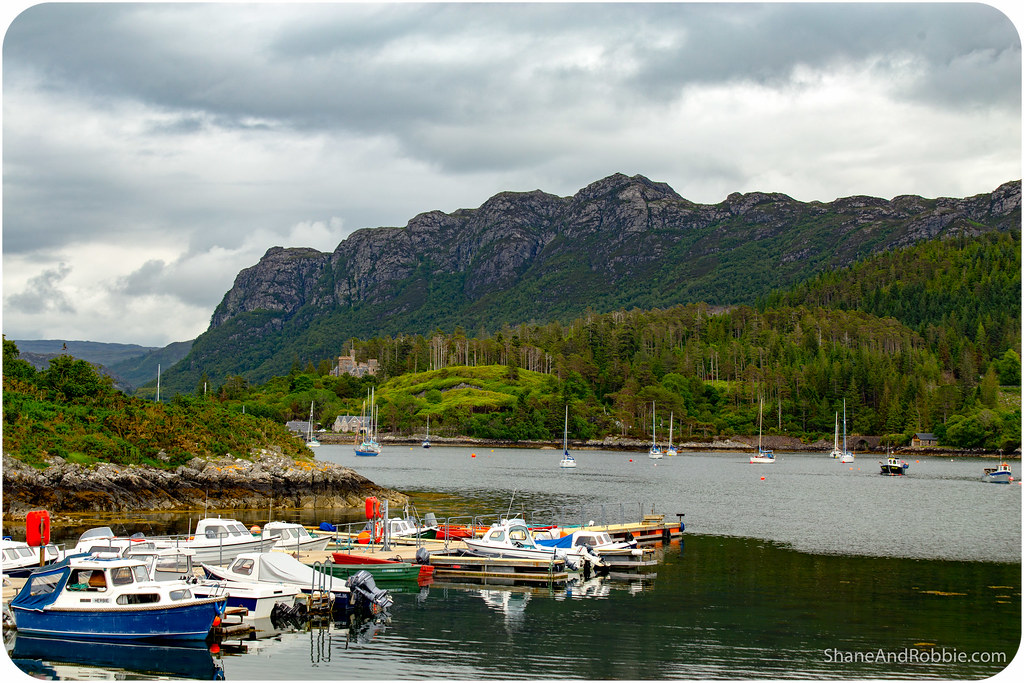 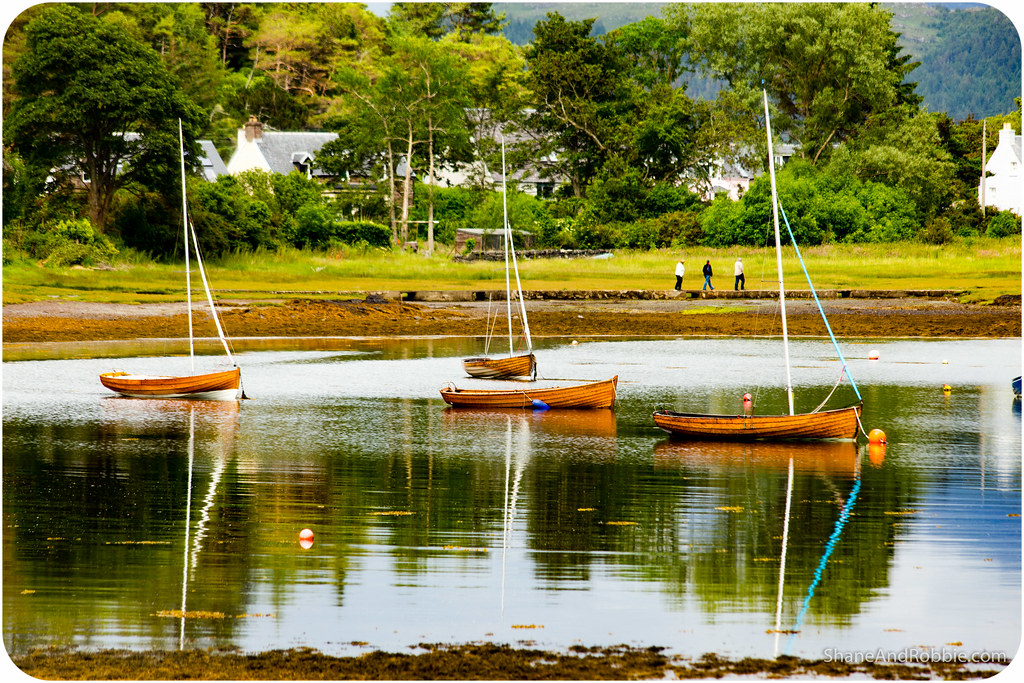 We’re staying in the township of Kyle of Lochalsh for tonight, not far from Plockton. To reach our accommodation we just had a drive a few short miles through the countryside, through the village of Drumbuie, and around the bend. Shouldn’t take more than 10 minutes we thought…. That was until we ran into a herd of Scottish Highland cows in Drumbuie! They were just wandering around the village, munching on the grass on the verge, and blocking the whole damn road. No one seemed perturbed by the cows, and no one seemed in a hurry to move them along, so we just sat in the car and watched them for a while. A totally unexpected highlight of the day! 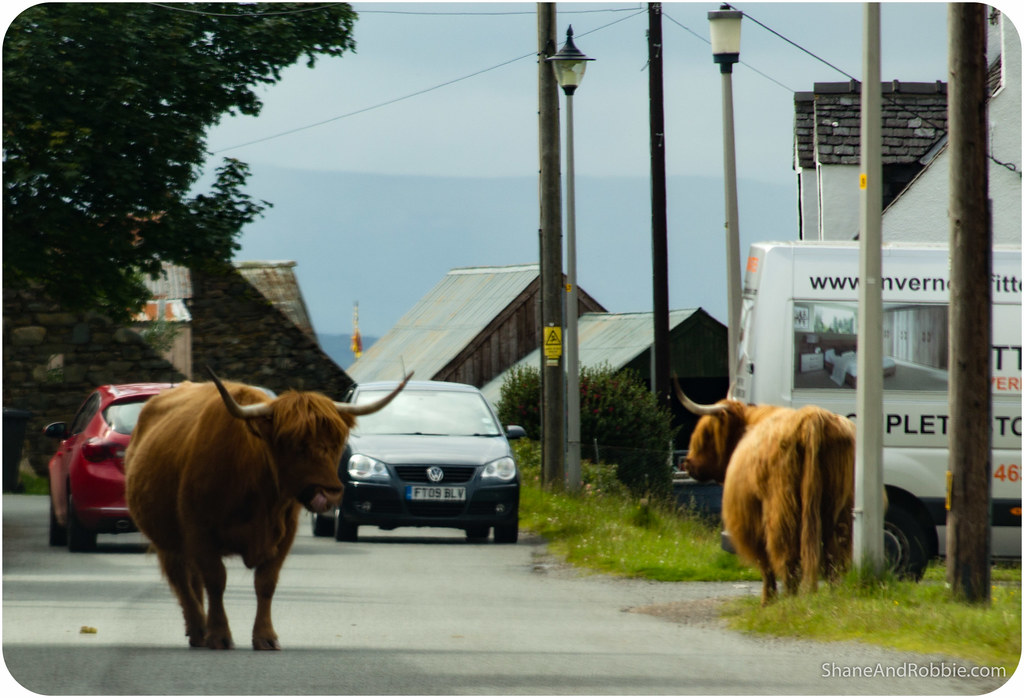 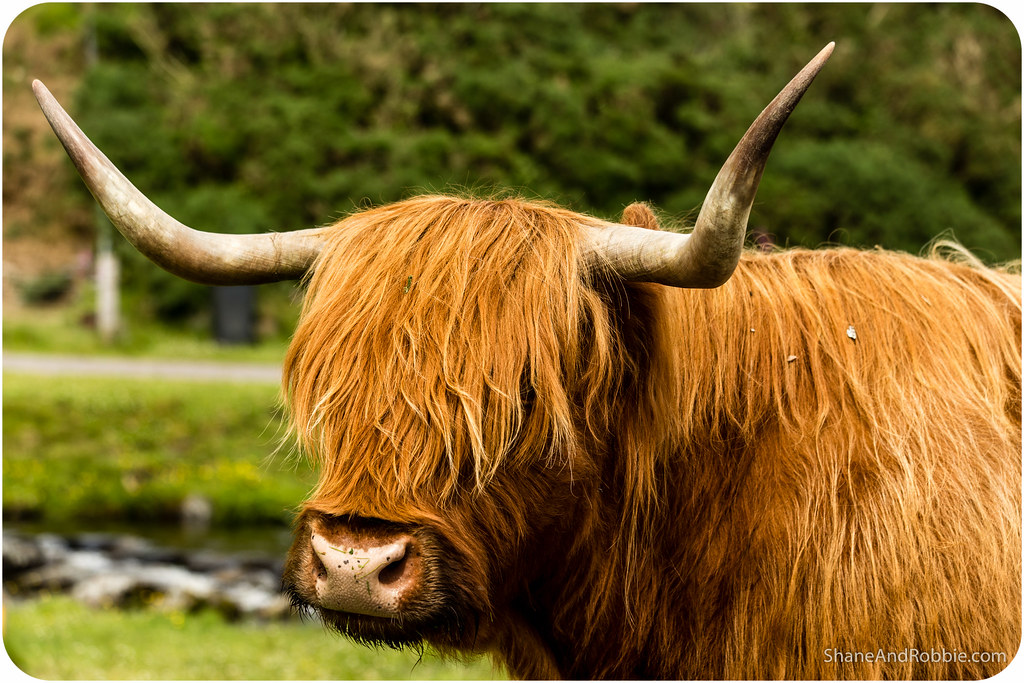 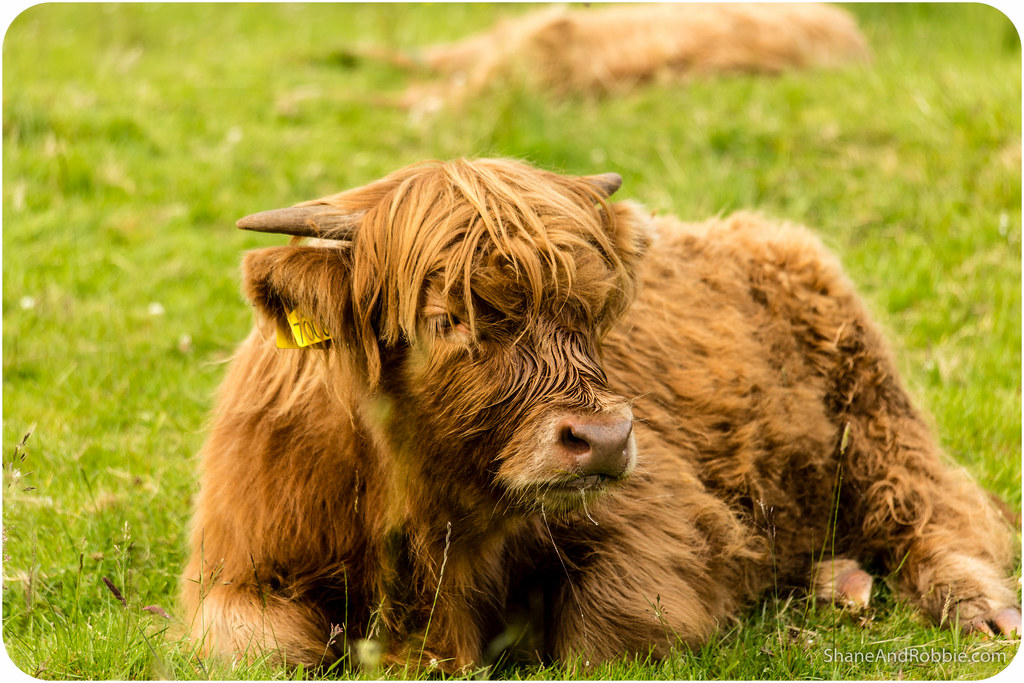 Eventually the cows moved off the road and we kept going, reaching the guesthouse we’re staying at around 5:00pm. It’s lovely here, by the shore of Loch Alsh. We had a great day driving down from Ullapool and are really enjoying the highlands. We’ve realised though that we’re moving too fast – we’re SEEING it all but not really EXPERIENCING it. A road trip like this is best done with a month up your sleeve, not a week! We would love to come back one day with more time and take the time to do some of the hikes around Loch Maree and Beinn Eighe; to go kayaking through some of the lochs around here; and to just have time to sit and enjoy the serenity of the Scottish Highlands. 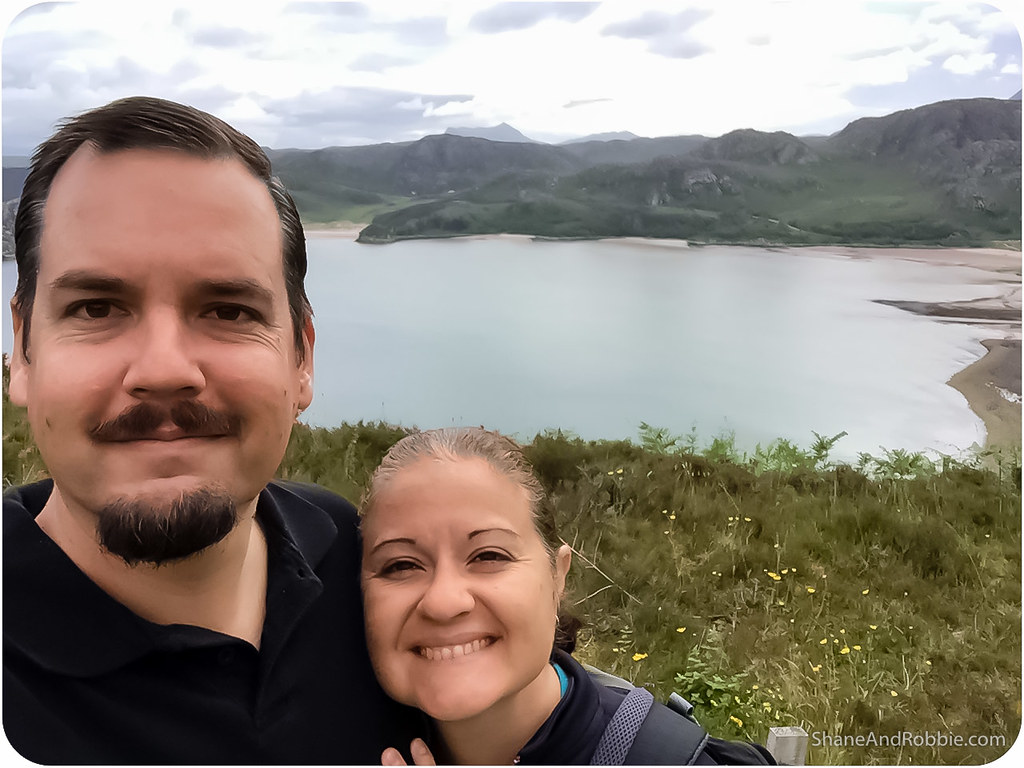