The Isle of Skye is one of Scotland’s top tourist destinations (after Edinburgh and Inverness/Loch Ness), and with good reason! We did a day-long driving tour of the island today and got to see picturesque villages, jagged mountains, velvety moors, cascading waterfalls, and towering sea cliffs. The island’s main appeal is the stunning scenery, and we only wish we had a week to spend exploring Skye! 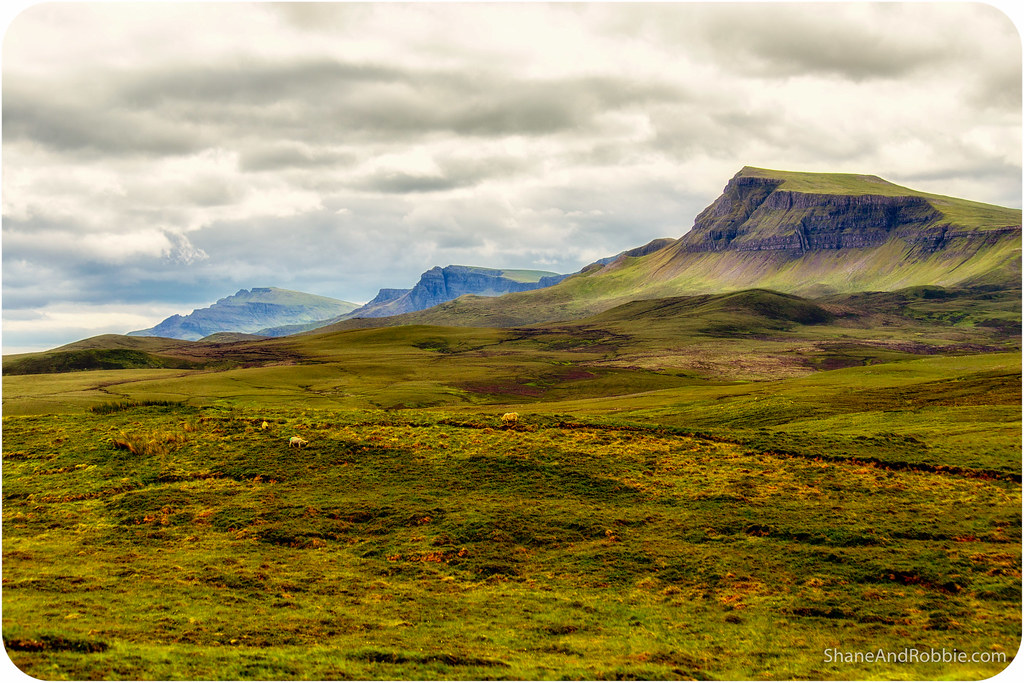 Kyle of Lochalsh, where we spent last night, is on the Scottish mainland just across from Isle of Skye. So to reach Skye we simply drove over the rather spectacular Skye Bridge. Opened in 1995 the bridge replaced the ferry service that used to take people, cars, and trucks across the strait. Initially a toll bridge, it is now free* and makes crossing on to the Isle of Skye very easy**.

*Intense protests by locals in the early 2000’s led to the toll being removed. Hooray for people power!

**A side-effect of this is that the number of tourists who flock to Skye has boomed. Good news for local businesses, bad news if you want to have Skye all to yourself!

First stop across the bridge was the village of Kyleakin. The ferries to and from the mainland used to pull in here, but now this small town is just a collection of B&B’s by the water that most people by-pass in their hurry to get to Skye’s bigger attractions. 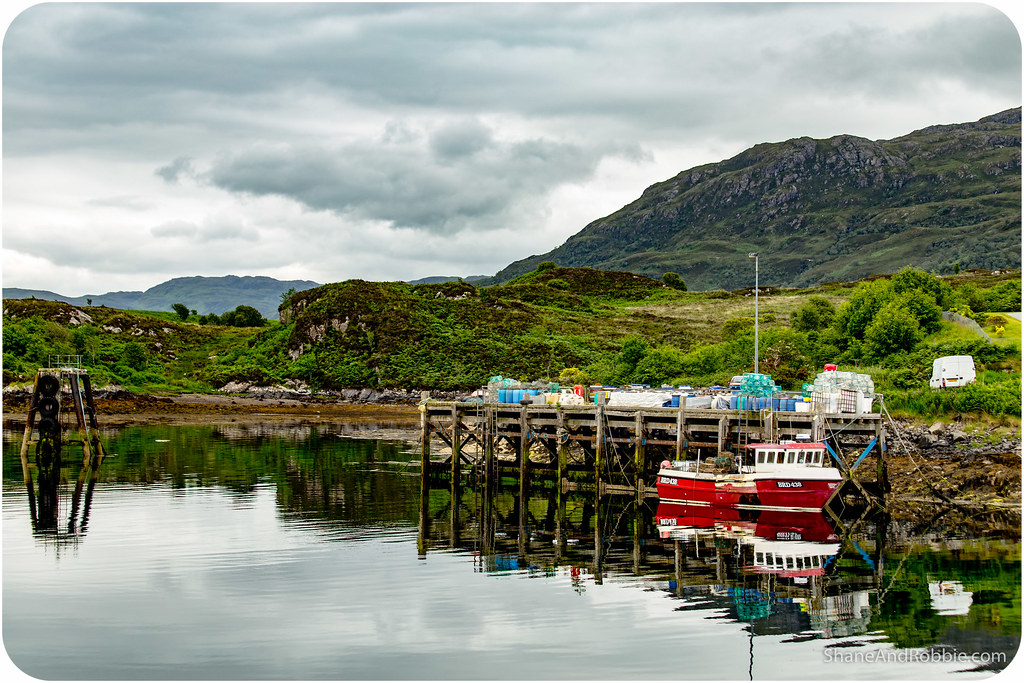 We pulled in at Kyleakin to enjoy the views across Loch Alsh and to take a peak at the ruins of Castle Maol. Constructed in the 15th century the castle was abandoned in the early 1600s. It was once the seat of the Mackinnon clan and controlled the strait between Skye and the mainland, through which all ships had to pass. Like all the castle ruins we’ve seen in the Highlands, Maol stands as a testament to the “changing of the guard” that happened in Scotland after the Jacobite Wars. It was after those defeats that the traditional Clan system gave way to British rule, and the Highland Clearances occurred, forever changing the face of Scotland. 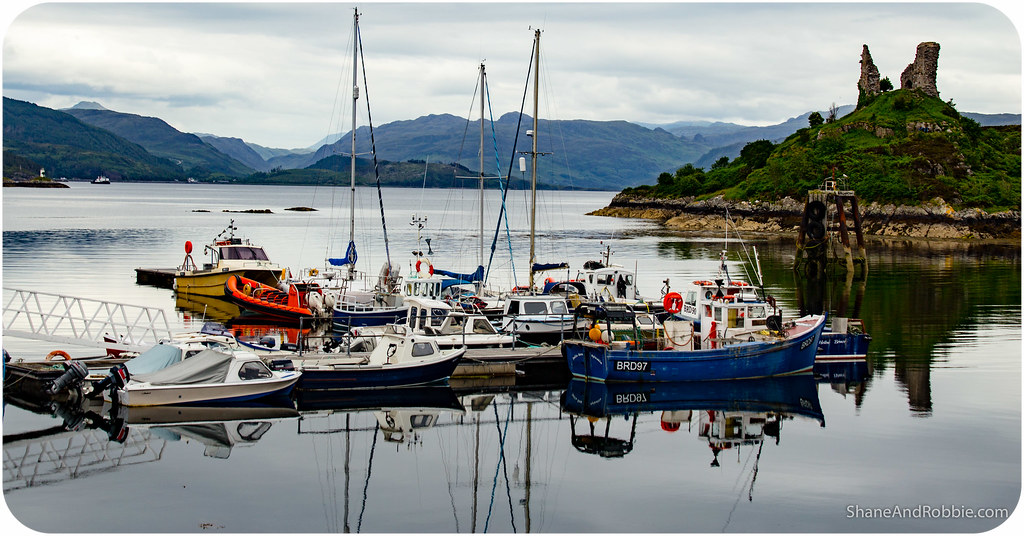 The Isle of Skye comprises numerous peninsulas that radiate from a mountainous centre, dominated by the Cuillin Hills. The main road around Skye runs along the coastline, skirting the Cuillins and joining all the pretty little seaside hamlets. It was this road we followed today on our circuit of the island, going from Kyleakin to Portree, the island’s main settlement. 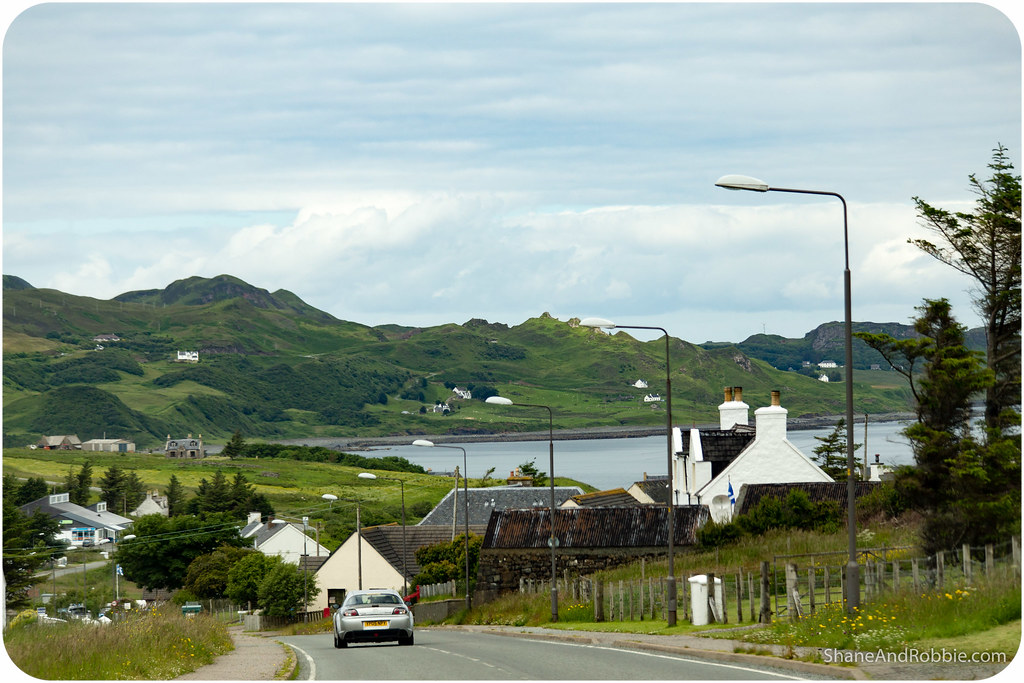 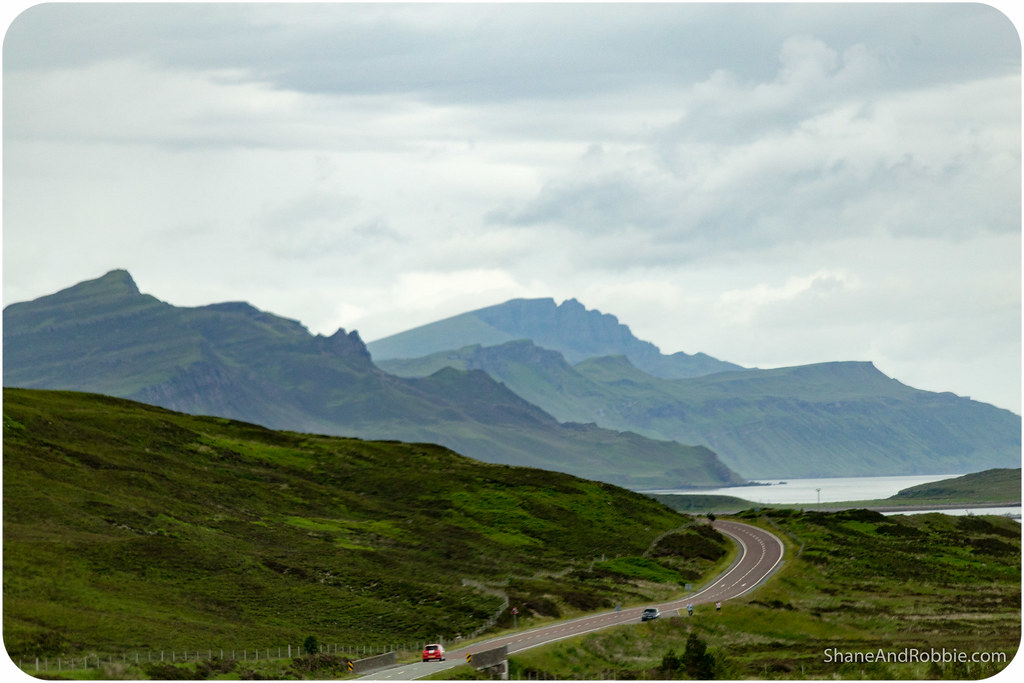 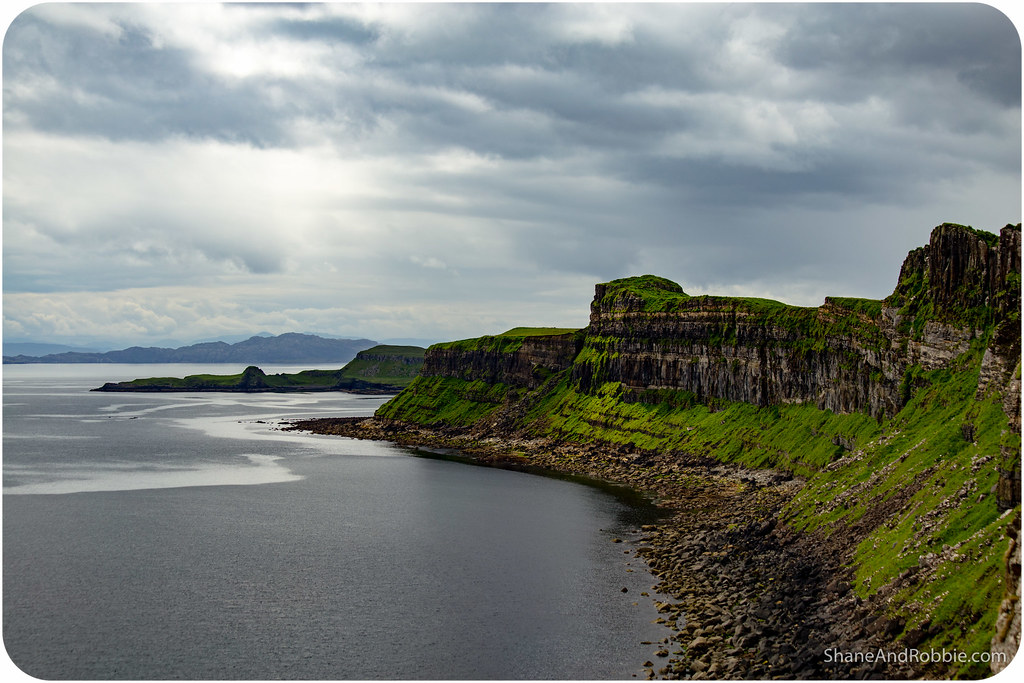 We had plans to stop in Portree for a coffee, but the sheer number of coaches and cars in town meant we couldn’t even find a parking spot! What was supposedly a cute harbour town had turned into a messy traffic jam that did not entice us to linger, so we moved on and kept driving until the peaks of Storr came into view. 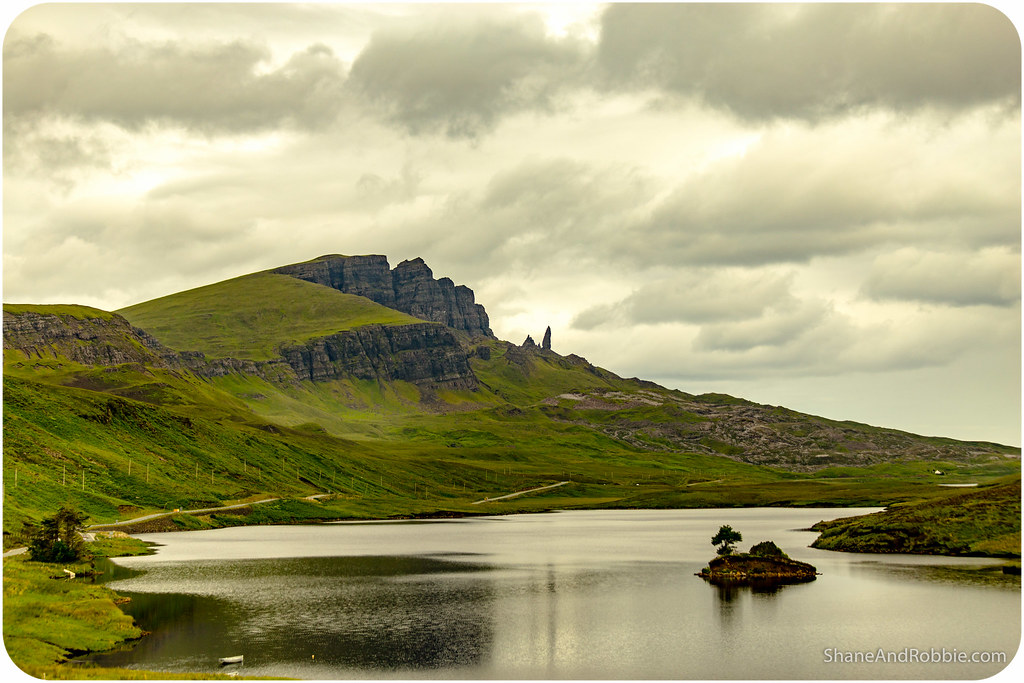 Just north of Portree the Hills of Storr are a series of rocky outcroppings that face west; most famous of all the peaks of Storr is the Old Man of Storr. This pinnacle of rock stands alone and is iconic – this is one of the best known symbols of Skye. Accordingly, the car park near the base of the Old Man of Storr was overflowing with cars, camper-vans, and buses. It was such a shock to see this ridiculous traffic jam out in the middle of nowhere! We considered pulling in and trying to find a parking spot, but the thought of hiking up the trail to admire the Old Man in the midst of 1,000 other people was not that appealing so we took a couple of photos and kept going, hoping to find a quieter corner of Skye to enjoy.

Lealt Falls, not far down the road, are less well known and were a quieter stop. We walked along the gorge to the end and enjoyed views down into Lealt Gorge, across to the waterfall, and down to the beach below. 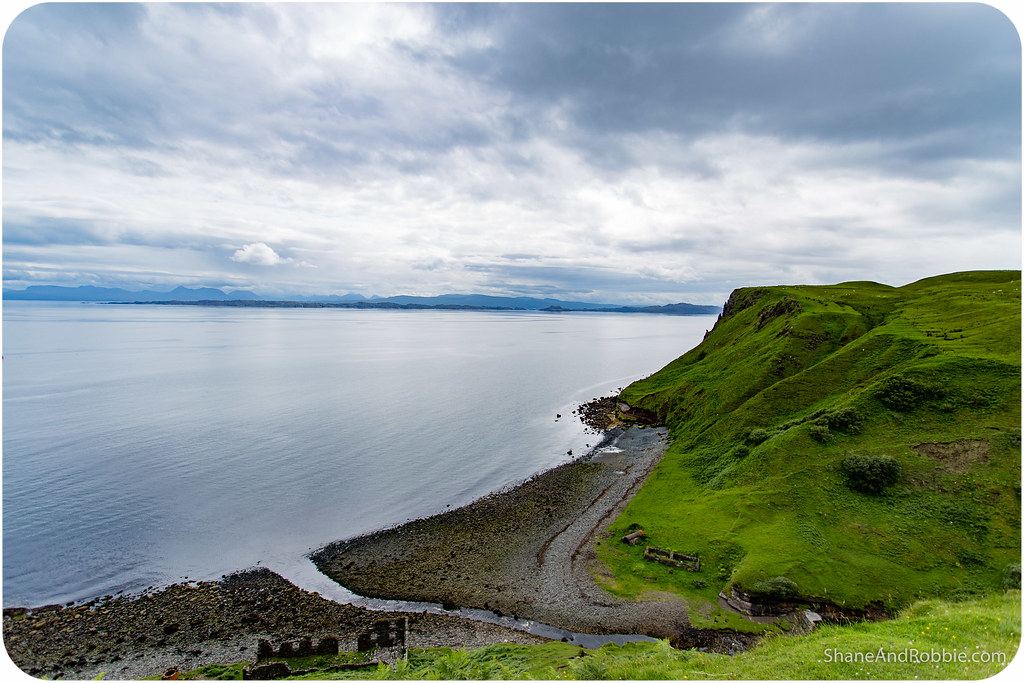 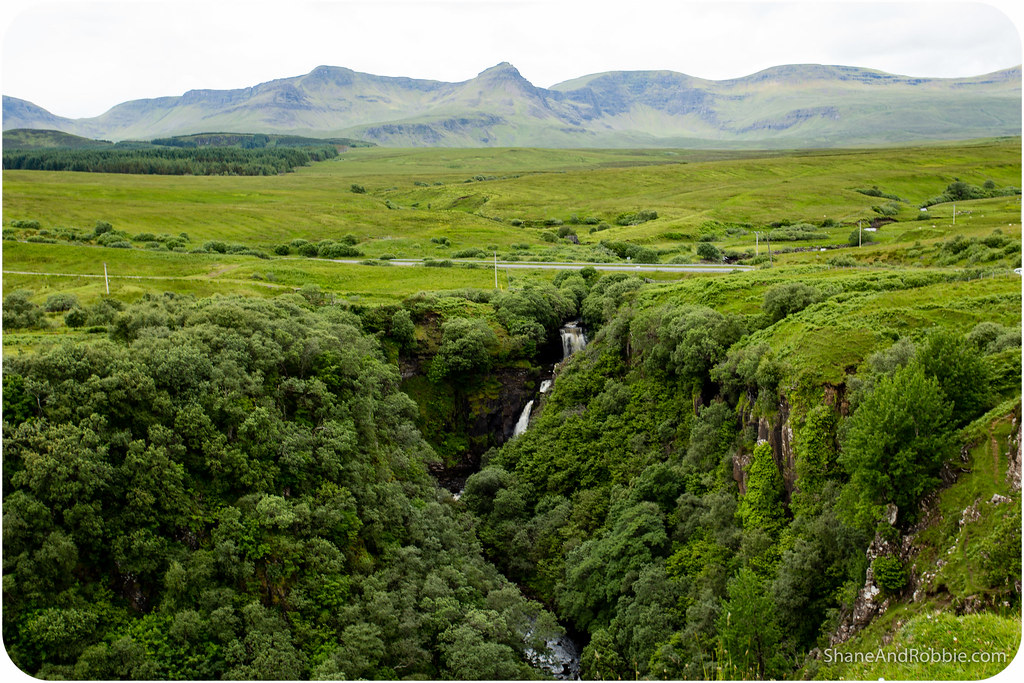 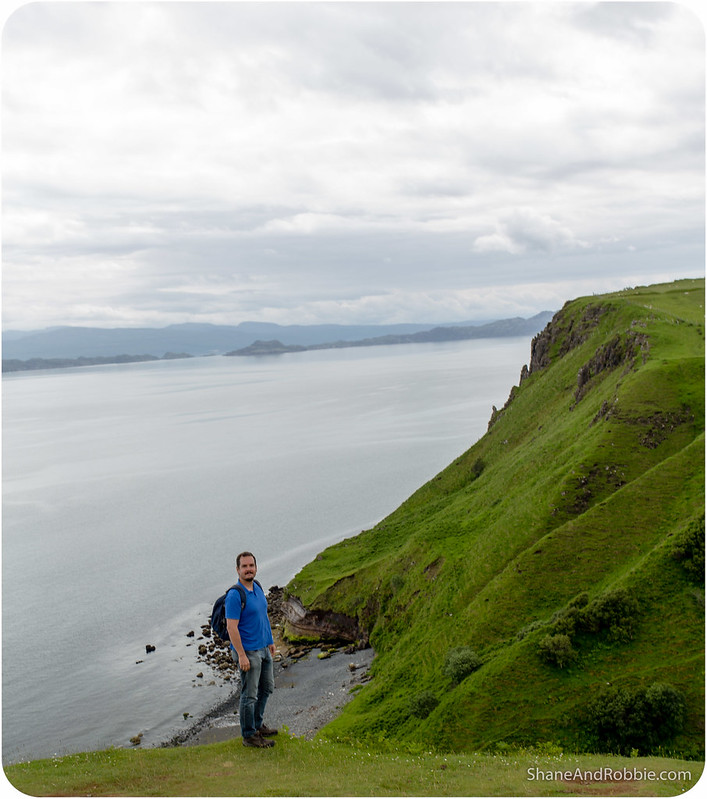 We really enjoyed Kilt Rock as well. The magnificent 55m high cliff looks strikingly similar to a pleated kilt and, legend has it, was formed when a giant hung his kilts along the cliffs to dry, thus causing the rocks to take on the shape of his pleated skirts. Cascading over the rock is Mealt Waterfall, which plummets directly from the top of the cliffs to the rocky coast below. 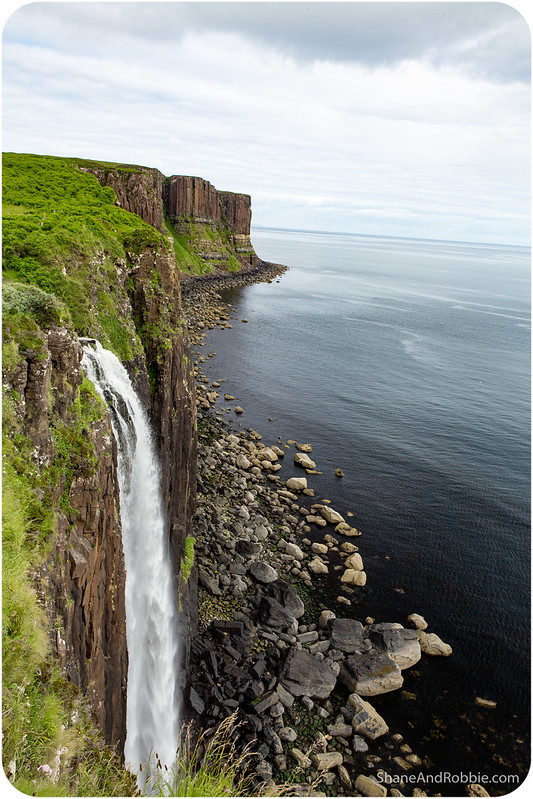 Continuing on we passed through the village of Staffin and turned inland, climbing up through the Quiraing Pass to cross over to the western coast. The views from the pass down across the farmlands and cliffs below was spectacular, and we got some great views across the Torridon Hills. 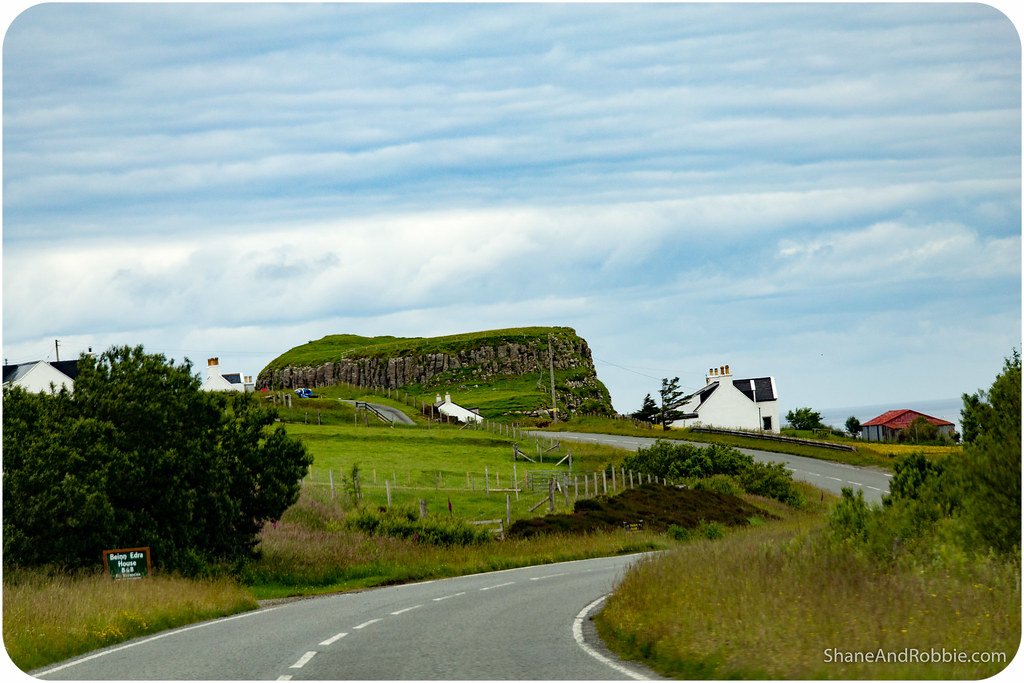 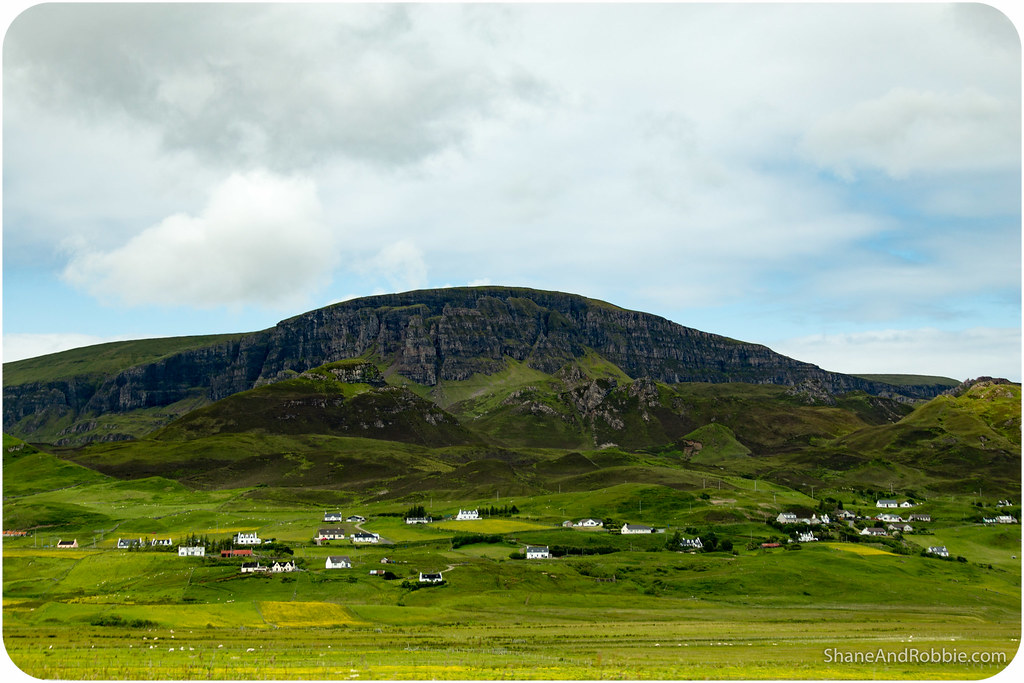 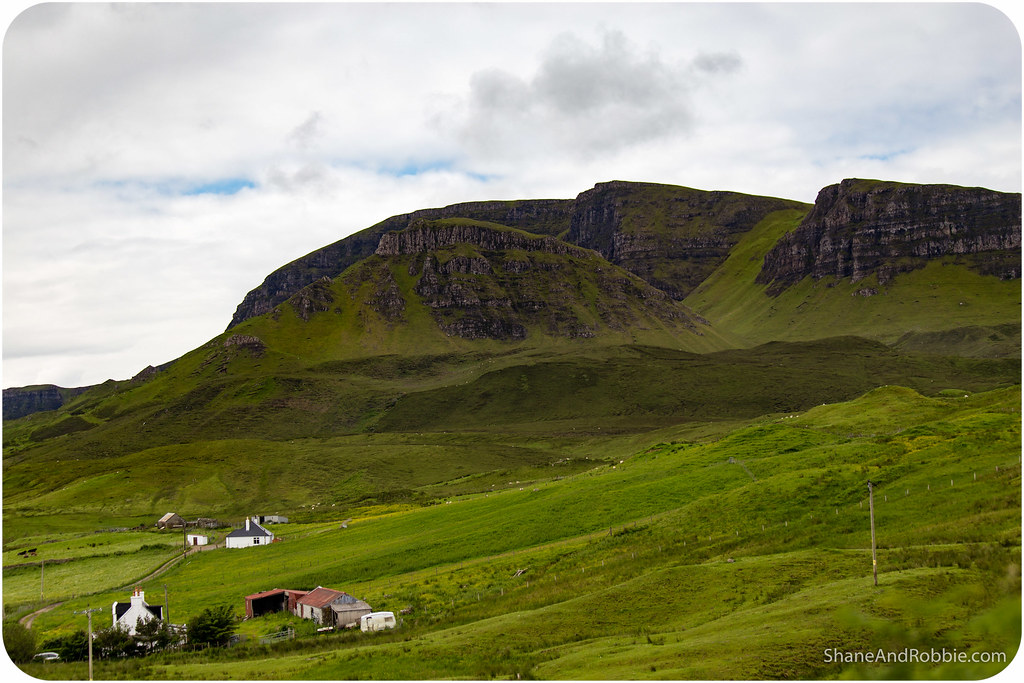 The road across to the western coast was a narrow, single lane track – like those we’ve been driving throughout the far northern highlands. Difference is there were A LOT more cars on the Isle of Skye today compared to up north (luckily no coaches – buses can’t get up the steep climb or fit on the narrow roads). As a consequence what should have been an easy 15km drive through the high mountains of Skye turned into a rather slow and painful crawl along the over-crowded mountain roads. At least the scenery was awesome! 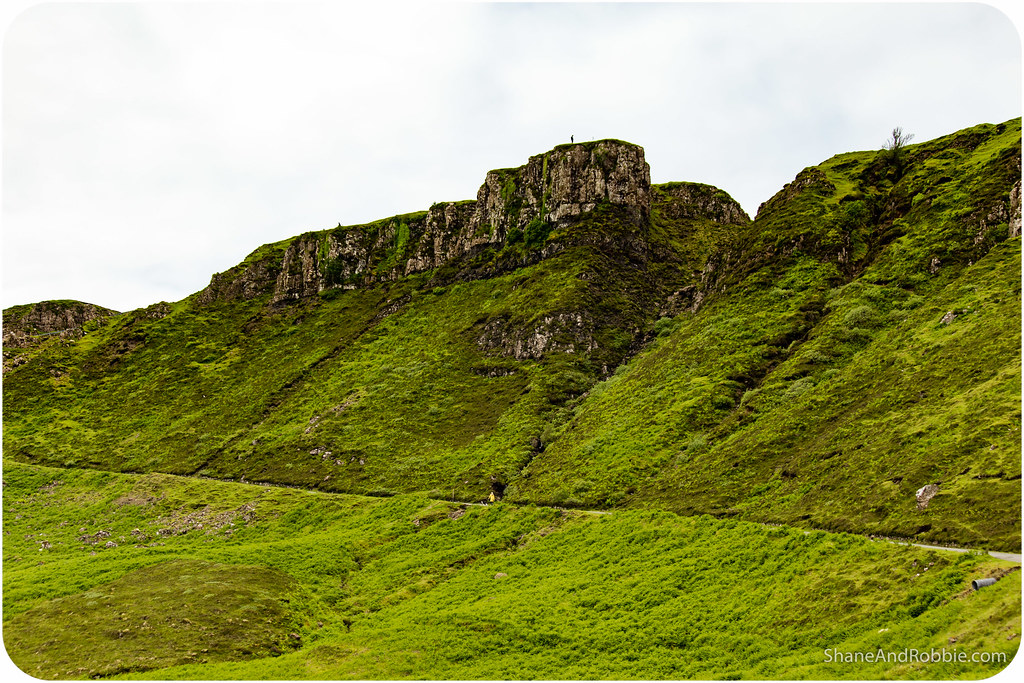 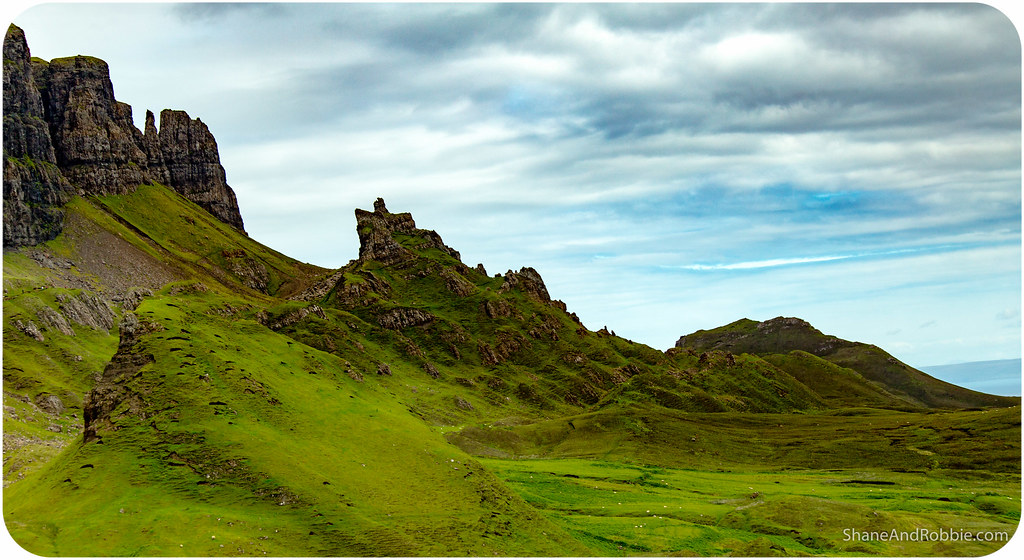 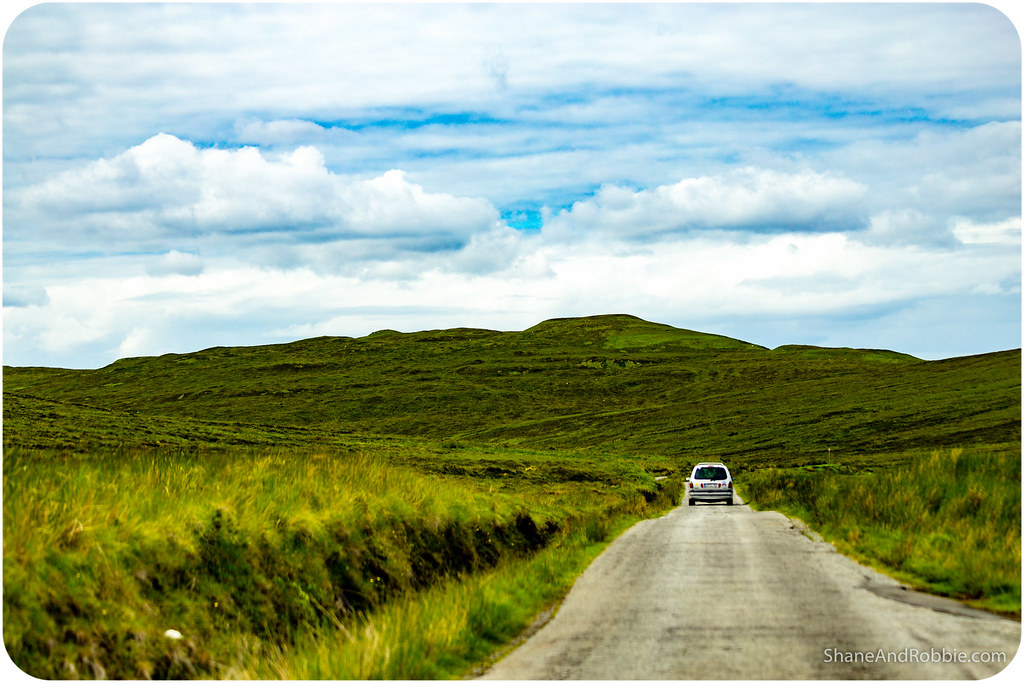 We did eventually make it down the other side of the mountains and into the village of Uig. Positioned in the shelter of Uig Bay, this small port town was far less crowded than Portree and we easily found a cosy café to sit in for a coffee and some lunch. 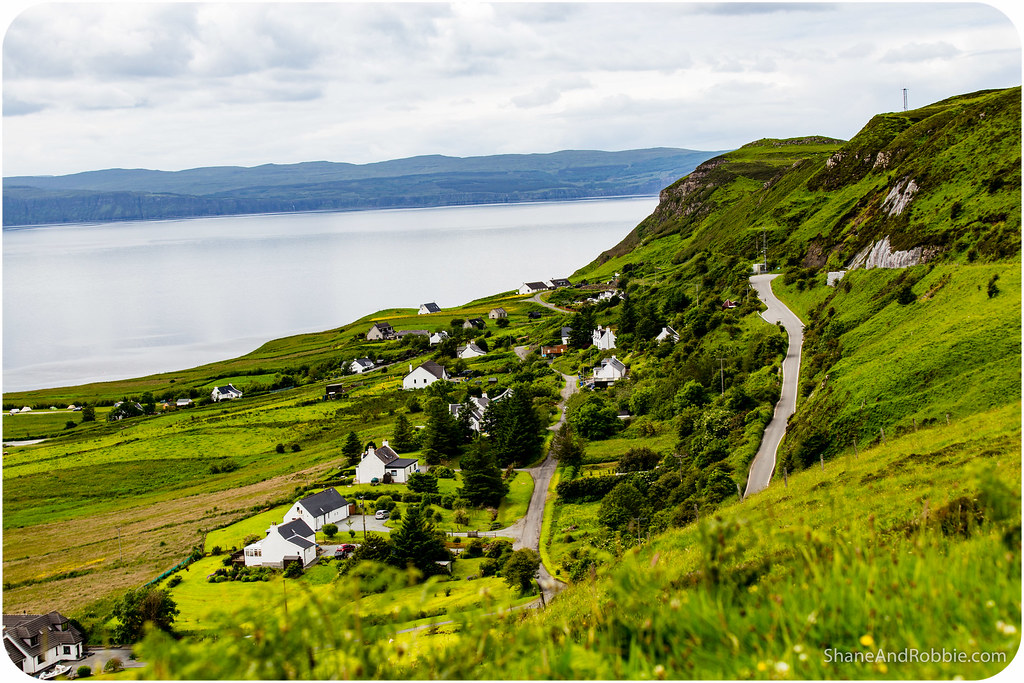 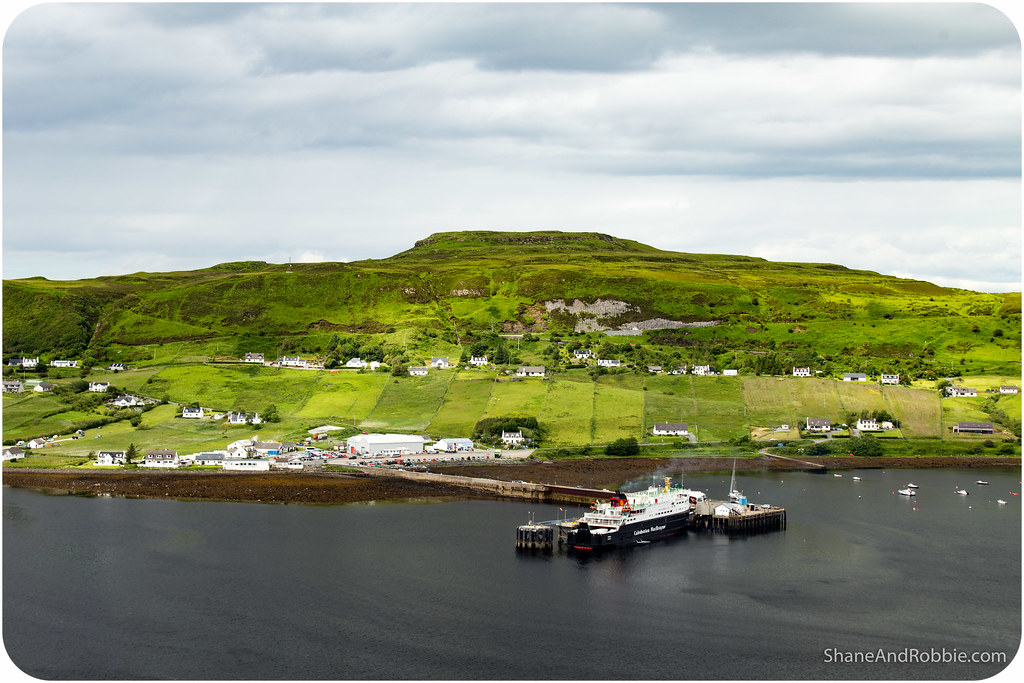 Leaving Uig we stopped on the hill overlooking the village for a last photo stop beside Uig Tower. The Tower was built by Major William Fraser who owned the lands around Uig in the 19th century. The tower was constructed around 1860 and was designed to look like a Normal watch tower. It never served any useful purpose and is now just a rather quirky local attraction. 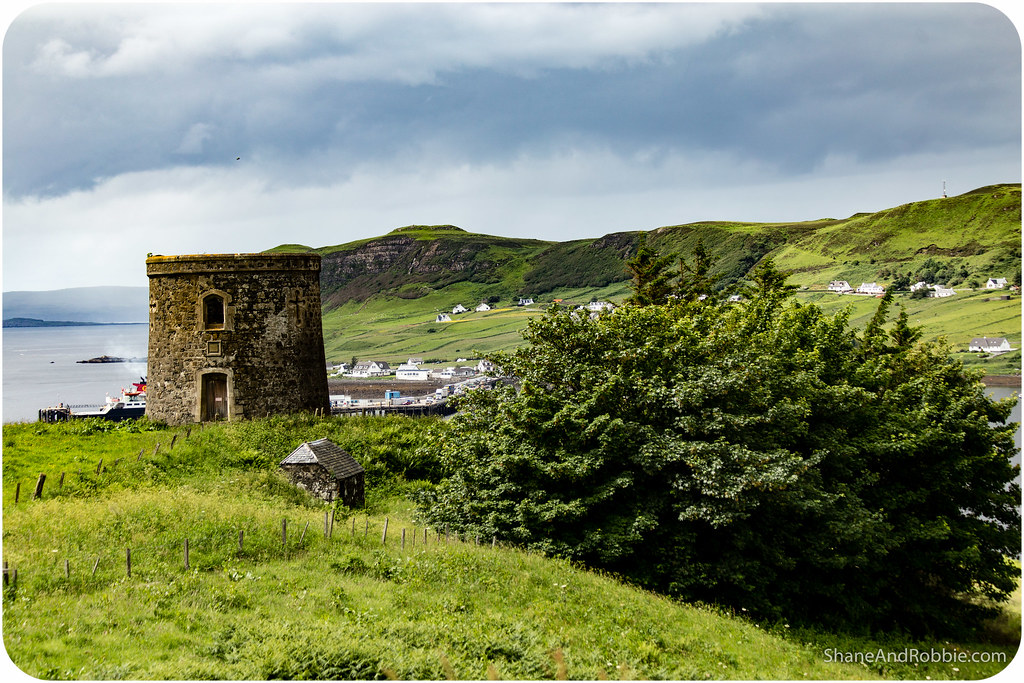 Our day sightseeing on Skye ended there really; from Uig we just drove back to Portree, hugging the western coastline and enjoying more of Skye’s beautiful scenery. 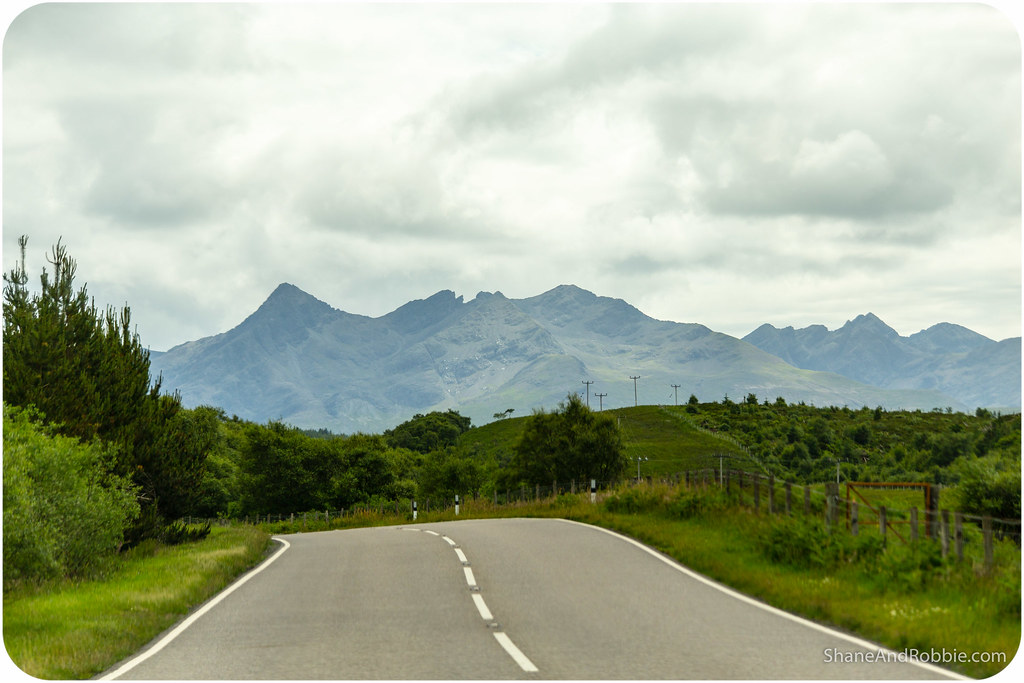 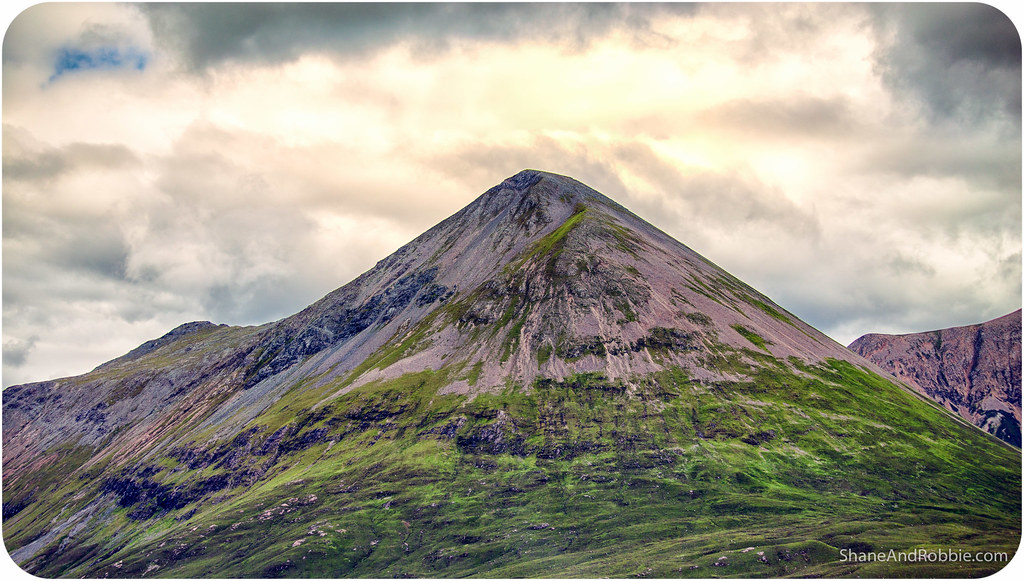 There’s so much more to Skye than the small part we saw, but we were rather put off by the crowds. We knew it would be busy during these peak summer months here in Scotland, but it surprised us just how many people there were traveling around the Isle today. After so long up in the vast expanses of the far north, where the number of tourists is minute compared to Skye, we were a little overwhelmed today by the number of people, coaches and rental cars out and about! It doesn’t take many cars to make the tiny roads on Skye become jammed, and for its pretty villages to feel crowded. We’d love to come back for a longer visit, but would come outside of peak next time (i.e. NOT July or August). There’s no doubt that the Isle of Skye is worth visiting, however. It is every bit as spectacular as we had read and we still really enjoyed our quick tour of the island today! 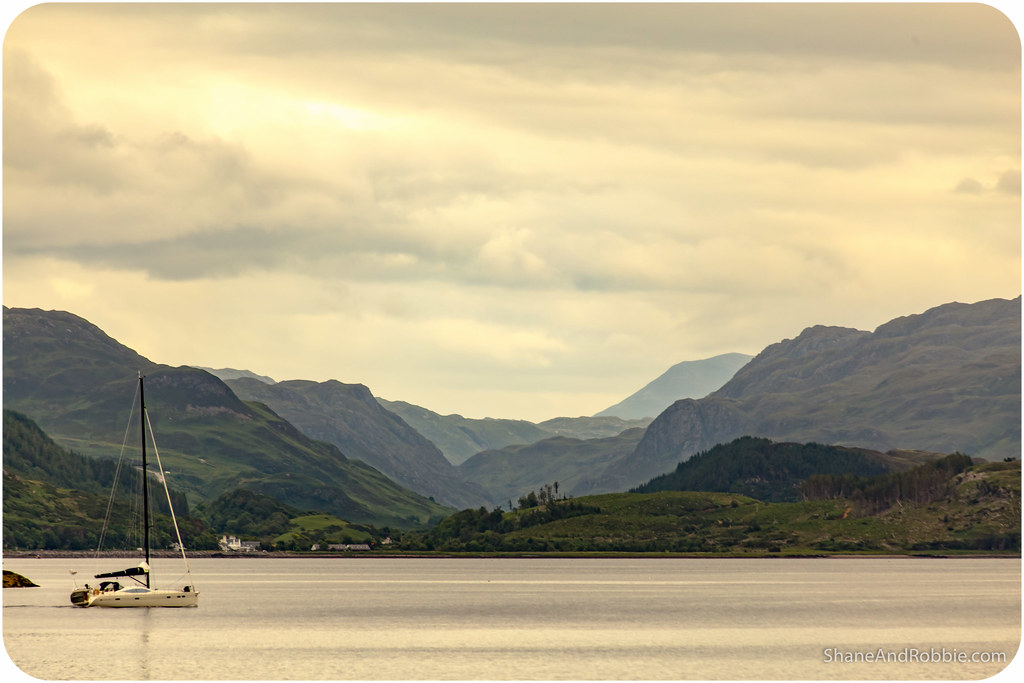